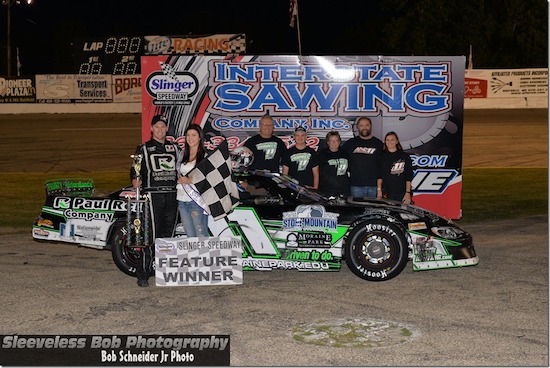 “This car was just awesome tonight,” Prunty exclaimed as he exchanged high-fives with the crowd gathered around victory lane, “We work so hard on this car and we’re just a one car team to run the Dells last night and win there and then get up early this morning , and get the car switched over, it’s just an incredible feeling to be here.”

“There are just so many people with the Kulwicki program behind me to make this all possible, “ continued Prunty, who also won the night before in the Wisconsin Dells, “I’m just shaking I’m so happy.”

Travis Dassow led the field to the green flag and paced the opening laps as fellow front row starter Prunty dropped in line behind him in second just ahead of Nick Wagner, Steve Apel, and Rob Braun. The top two ran single file for a few laps while Apel worked the high side to pass Wagner for third, leaving him to battle Rob Braun and Gary LaMonte over fourth with Chris Blawat and Brad Mueller lurking close behind. On lap four, Prunty dove to the inside of Dassow exiting turn four and competed the pass for the lead, stretching his advantage as Apel worked over Dassow for second. As Prunty edged ahead, Apel took to the inside lane to take second from Dassow while behind them Braun, Blawat, and LaMonte occupied the fourth through sixth spots. Prunty began to work lapped traffic with Apel attempting to close in as Blawat caught and passed Dassow for third. Prunty methodically picked his way through the lapped traffic and never allowed Apel to close to more than a few car lengths as the driver on the move in the closing laps was LaMonte who slipped by Blawat for third. Prunty was never headed as the race ran caution free and he took the checkered flag ahead of Steve Apel for his first career super late model feature victory at the Slinger Super Speedway. Gary LaMonte finished in third while Chris Blawat crossed the finish line in fourth and Travis Dassow was fifth. Rob Braun took the checkered flag in sixth place ahead of Brad Mueller and Nick Wagner while Ryan DeStefano and James Swan rounded out the top ten.

Ryan Gutknecht drove to his first feature victory of the season in the 40-lap late model main event.

Jesse Bernhagen and Ryan Farrell brought the field to the green flag with Bernhaged taking the early lead and Farrell settling into second just in front of Kyle Chwala, Tyler James, and Ryan Gutknecht. Farrell exited the speedway during the early laps with mechanical problems and Chwala took over second place behind the leader Bernhagen. The inside line was the place to be behind the lead duo and Gutknecht used the low groove to pass by James and into third place, with Dan Jung entering the top five just ahead of Jordan DeVoy and Mike Held. Gutknecht also used the low lane to get around Chwala for second and began to chase down Bernhagen for the lead as Jung, DeVoy, and Held raced intensely for the fifth position. Just before the halfway mark, DeVoy and Held used the outside lane to dispatch Jung in fifth just as Gutknecht ducked to the inside of Bernhagen in a bid for the lead. Gutknecht made the move work and he took command of the race after several laps of battling side by side. With Gutknecht, Bernhagen and Chwala worked lapped traffic, the best battle on the speedway was between DeVoy and Held over fourth as the two traded paint a few times before finally tangling in turn four on lap 36 resulting in DeVoy’s car spinning into the infield. Gutknecht chose the inside for the restart and he again raced out to the lead while Chwala edged Bernhagen on the inside for second. Tyler James also worked the low groove to move past Bernhagen for third in the closing laps. Gutknecht drove to the win, his first of the season over Chwala who finished a strong second. Tyler James finished third while Jesse Bernhagen and Scott Roberts rounded out the top five.

Late model heat races were won by Zach Braun and Jesse Bernhagen and Jordan DeVoy set fast time with a lap of 12.209 seconds.

Prietzel and Bobby Gutknecht paced the field to the green flag and they raced side by side, trading the lead in the opening laps until the caution flag waved on lap four for a spin by George Schultz with Gutknecht barely leading over Prietzel. The top two chose the inside lane for the restart leaving Brad Hetzel to take the outside front row spot but before the green flag waved, Hetzel’s car broke loose off turn four and he spun across traffic and into the infield. The incident left Bobby Gutknecht and Ryan Gutknecht on the front row and as racing resumed, Bobby raced into the lead over Ryan. Prietzel raced in third while Brian Holtz and Eric Lingford battled over fourth. Lingford took the position and then tracked down Prietzel in third while Bobby and Ryan Gutknecht continued to hold the top two spots. With Bobby Gutknecht still leading, Lingford and Prietzel both used the inside lane to pass Ryan Gutknecht to move into second and third respectively. Lingford then attempted to pass Bobby Gutknecht for the lead on the inside off turn four on lap 30 but the two cars came together entering turn one drawing a caution flag and moving Prietzel to the lead over Ryan Gutknecht and Brian Holtz. Ryan Gutknecht challenged Prietzel for the lead over the final five laps with the two drivers locking wheels at one point on the backstretch while Holtz remained directly behind them. Prietzel survived the aggressive battle on the final lap and he drove to the win over Ryan Gutknecht and Brian Holtz. Eric Lingford worked his way back to fourth and Ken Calhoun was fifth.

Jimmie Evans and Ryan Gutknecht each won a Midwest Sportsman heat race and Ryan Gutknecht was the fastest qualifier with a lap of 12.831 seconds.
Tom Berens dominated the Slinger Bee 25-lap feature and scored a convincing win over Jayden Buckley and Dale Kiley-Schaefer. Jakob Hassler and Steve Zoromski rounded out the top five. Slinger Bees heat races were won by Paul Reagles and Jayden Buckley while Jakob Hassler set fast time at 14.517 seconds.

Quentin Poupore drove his BMW to the victory in the Spectator Eliminator races and Scott Goetzke won the Figure 8 race.