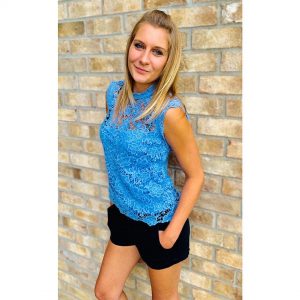 Miss Slinger 2020-2021
Rachel Taylor
In school I was an avid Soccer player and did Track & Field. Living on Lake Tichigan, I was on the water a lot and like to Wakeboard and I also enjoy Snowboarding. I went to Gateway Technical College, and have my real-estate license and currently work for Keller Williams Realty. My favorite food is pretzels with beer cheese. I like dogs and have a mini Golden Doodle named Copper. I enjoy fashion, the sun, cars and racing. I’m proud to represent the track as Miss Slinger Super Speedway! 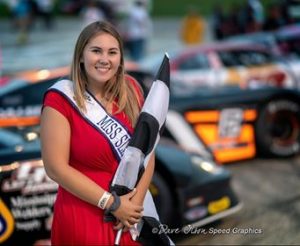 I wanted to become Miss Slinger Speedway for a couple reasons actually. I’ve been an outdoors girl all my life with motorsports right alongside it when it came to my interests. I have been going to the track since I was the age of one. My grandpa, Norman “Sags” Saegert, used to be the flag waver so some of my very first colors learned were through the flags he asked me to hand him. So a part of my decision was to carry out my grandpa’s legacy there. Also, with me going there every Sunday out of my own interests, I thought it’d be nice to finally get to know the drivers I’ve been following on a more personal level and get a new experience on the track other than the stands. ~Mikena Wantz 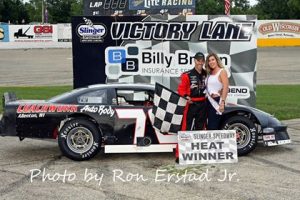 Miss Slinger 2018-2019
Kristy Held
Being Miss Slinger is so much more than a satin sash and a smile. It’s sharing the excitement of a rookie’s first win, or a veteran’s 20th trophy. The pride beaming from the crew and family as they run down from the pits to share the moment. Helping the kids out of their car...or catching it as it rolls away. It’s welcoming newcomers to the track and chatting with the season pass holders. Being a part of Slinger Speedway each week is my Sunday Funday. ~Kristy Held

The best part of being Miss Slinger...

Ashley Cridelich, 2015-2018
The best part about being Miss Slinger was honestly just meeting all the new people, both racers and fans. Plus actually being able to be on the track and getting to know all the racers on a more personal level rather than just “Oh hey, look that's so and so and he/she is in the lead”. I love all the new friends I made. It was such a close-knit community and I liked to call it my race family.

Ashley Hoffmann, 2009-2012
The best part of my Miss Slinger experience was interacting with all the drivers who grew into friends. It was great interacting with everyone from the racetrack in general - fans, employees and drivers.

Sara (Olson) Dornbrook, 2004-2006 and 2007-2009
The best part was meeting so many people and gaining a whole new family! The track is a fun place to hang out and gain a ton of new friends! If you have interest in modeling/other pageants, this is also great to have on your comp card. It opened so many doors for me WAY back in the day in the four years that I did it. I have so many amazing memories and have met so many great people because of this opportunity! I am STILL there to help when I can so I can see everyone!!!

Amanda (Tackes) Andrasic, 2001-2002
The best part of my experience as Miss Slinger Speedway was the people I met and interacted with! The fans were amazing! The drivers and crew were like family! Finally the staff, safety crew and administration of the track kept things running smoothly and safely for everyone (including myself as I stood in the middle of the track enjoying the race - it was the best seat in the house!).

Kathy Peterson, 1985-1986
The best part of my experience was meeting and getting to know the drivers and the fans!

Jean (Gilligan) Killoren, 1981-1982
The best part was all the excitement; being in the middle of the track was fantastic!