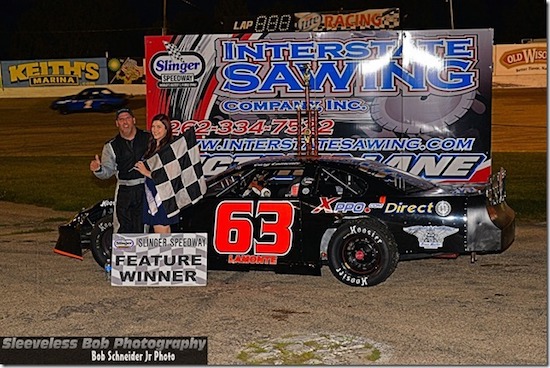 “We came through and we’ll take it,” an obviously excited LaMonte stated from victory lane, “It’s been a long struggle and we are a small team without a lot of sponsors and we run part time, so it’s great to come out and run with these guys that are here every week.”

“I was trying to keep the heat on Rob Braun and make him make a mistake, “ LaMonte continued describing the pass for the lead on Braun, “I put myself in a bad spot and found the backstretch wall with fifteen or so laps to go but it didn’t hurt me too bad. Then we came around and I watched him and he just washed a little wide and put himself into the wall and I just dove for the hole and it stuck.”

Brad Keith and Lowell Bennett led the field to the green flag and Keith led the opening lap before caution fell on the speedway quickly as Duke Long’s car skidded into the infield entering turn one. Keith charged back into the lead on the restart with Rob Braun settling into second place and within two laps Braun was on Keith’s bumper challenging for the lead. Braun took the lead with an inside pass on lap five as Steve Apel advanced to challenge Keith for second, taking the position a few laps later while behind them Gary LaMonte and Chris Blawat battled over the fourth position. Fred Winn and Tim Lampman got together while racing hard for position on lap 8 and as the field stacked up behind them Brad y Bennett and Duke Long tangled, sending Long’s car sailing hard into the turn three wall and catch fence as the red flag was displayed. Long dropped the window net almost immediately indicating he was not seriously injured in the incident. Braun and Apel paced the field on the restart and they raced door to door for several laps and swapped the lead before Braun eventually pulled ahead. Gary LaMonte and Chris Blawat advanced into third and fourth respectively as the front runners lined up around the inside lane. With Braun stretching his lead slightly, LaMonte was able to edge to the inside of Apel to take second just before the halfway mark as Blawat held down fourth just ahead of Alex Prunty and Lowell Bennett. The caution flag waved again on lap 26 for Brad Keith’s spun car in turn two with Braun leading over LaMonte, Apel, Blawat, and Prunty. Braun maintained the lead as racing resumed over LaMonte while Blawat went to work on Apel for third. Blawat eventually took the position a few laps later while LaMonte began to track down Braun for the lead. With the laps winding down, LaMonte closed in but a small scuff off the backstretch wall caused him to lose momentum, forcing him to start his charge forward all over again. The leaders approached lapped traffic and with nine laps to go, Braun’s car clipped the frontstretch wall and as he drifted into turn one, LaMonte dove for the opening and made the pass for the lead between Braun and a lapped car as they exited off turn two. LaMonte held on for the final laps to take the victory as Braun’s car trailed smoke from the right front on his way to a second place finish. Chris Blawat finished third with Steve Apel fourth and Alex Prunty in fifth. Lowell Bennett finished sixth followed by Ryan DeStefano and Mitch McGrath while John DeAngelis Jr. and James Swan rounded out the top ten.

Tyler Schley led the opening laps over Jack Stern and with Mike Held and Ryan Gutknecht following close behind while E.J. Waldron, Kyle Chwala, Jordan DeVoy, and Brian Holtz all batted for position throughout the field. As Schley pulled away out front, Stern and Held battled for second aggressively with Stern on the inside and Held on the outside. Gutknecht moved into second place when Stern and Held came together after several laps as Schley continued to lead. Gutknecht’s race came to an end on lap 31 when his car stopped in turn four with mechanical problems as Schley led over Held, Kyle Chwala, and Jordan DeVoy. Schley led on the restart over Held and Chwala and Schley’s car began to kick loose off the corners. As the leaders exited turn two, Schley’s car again slid loose across the nose of Held and as contact was made Schely’s car spun sideways directly into Chwala’s machine and by the time the dust settled, Schley, Held, Chwala, and Jordan DeVoy were all involved. That gave the lead to E.J. Waldron over Rob Braun with less than ten laps to go. Waldron led on the restart but two laps later, Braun worked his way into the lead on the inside. Waldron remained determined however and a lap later, he used the inside to take the lead back as Braun found himself also battling with Held who charged from the rear of the field to third in the closing laps. Waldron drove to the victory for his first career late model feature win while Held edged Braun for second at the stripe. R.J. Braun finished fourth and Brian Holtz was fifth.

R.J. Braun and Ryan Gutknecht won the late model heat races and Jordan DeVoy was the fastest qualifier with a lap of 12.268 seconds.

Paul Wagner took the lead from Joe Shelby on lap 17 and drove to the win in the 30-lap Area Sportsman feature. Scott Ascher advanced forward to take second place at the checkered flag and Ken Au crossed the stripe in third. Andy Welter finished fourth while early leader Joe Shelby was fifth. The Area Sportsman heat race was won by Rich Wagner and Jacob Schraufnagel set fast time at 13.089 seconds.

Willie Van Camp won the Figure 8 race that ended early due to fluid on the racetrack from a car with mechanical problems.