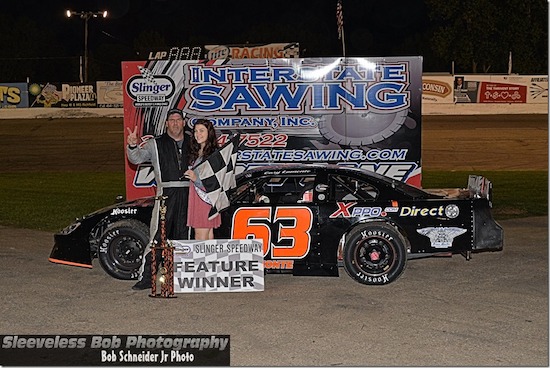 “Ever since the Nationals we’ve had something figured out and it’s giving me tons of rear grip at the end and we just kill them off the corners,” LaMonte told the crowd from victory lane, “And now that we’ve got the bugs worked out of me we’ve got a great car and have tons of confidence so we can go out and have some fun.”

Lowell Bennett and Ryan DeStefano brought the field to the green flag as Bennett led the opening laps with DeStefano right beside him. Contact between their two cars entering turn one on lap two resulted in both drivers getting sideways with DeStefano spinning around as the incident also collected track championship contenders Steve Apel and Chris Blawat along with Nick Wagner. Blawat and Wagner were able to continue but Apel, who was piloting Duke Long’s car after his own ride was severely damaged last week, retired from the event, putting a major dent in his championship points lead.

Grant Griesbach assumed the lead for the restart and chose the inside lane, leaving second place Rob Braun to take the top side with Brad Mueller, Gary LaMonte, and Alex Prunty doubling up behind them. Griesbach held the lead as racing resumed but was pressured heavily by Braun from the high lane while LaMonte used the outside lane to edge into third place ahead of Prunty and Mueller. Griesbach and Braun battled side by side for several laps before Braun eased ahead from the top groove as Griesbach’s car began to dance slightly off the corners. LaMonte also worked his way around Griesbach for second place just before the caution flag waved again on lap 14 when Fred Winn’s car went for a spin after racing with Mitch McGrath for position farther back in the field. Braun held the lead from the inside lane on the restart while LaMonte quickly fell into line behind him a lap after the green flag waved as Prunty, Mueller, and Blawat all went to work on getting by Griesbach for third. LaMonte’s car cut off the turns better than Braun’s and on lap 17 he was able to duck to the inside exiting turn two to take the lead as Prunty also worked his way past Braun for second. Both Mueller and Blawat also passed Braun for position before he left the speedway with mechanical issues as LaMonte continued to lead over Prunty. Prunty kept LaMonte honest as the leaders worked their way through lapped traffic with Blawat sitting third while Mueller exited the race after cutting down a tire while running fourth. Prunty closed in slightly in traffic but LaMonte proved to be too strong as he drove to his second career super late model feature victory. Alex Prunty finished a close second while Chris Blawat finished third and closed to within five points of Steve Apel in the battle for the track championship with just one week remaining. Brad Keith overcame mechanical problems earlier in the night to finish a strong fourth while Kelsey Dassow posted her career best finish with a fifth place run. Lowell Bennett finished sixth ahead of Nick Wagner and Tim Lampman while Jerry Eckhardt and Brad Mueller rounded out the top ten.

Super late model heat races were won by Mike Egan, Grant Griesbach, and Alex Prunty while Gary LaMonte was the fastest qualifier with a lap at 11.308 seconds.

Dan Jung crossed under the checkered flag first in the 40-lap late model feature but later failed post race technical inspection and was disqualified.
Jason Thoma led the opening lap from the pole position before Dan Jung drove around from the outside lane to lead lap two. Kyle Chwala and Steven Schulz also followed Jung from the outside and into third and fourth as Thoma fell to fifth just ahead of Mike Held, Jeff Way, and Jordan DeVoy. A spin by Scott Roberts in turn two on lap ten drew the first caution flag with Jung leading over Chwala, Schulz, Thoma, and Way. Jung maintained the lead on the restart as Schulz moved into second ahead of Chwala as Way, Held, and DeVoy also got around Thoma for position just before the caution waved again when Jake Vanoskey’s car spun in turn two. Jung once again maintained the lead as racing resumed as behind him Chwala, Held, and DeVoy, the three track championship contenders all advanced into second, third, and fourth just ahead of Schulz and Way. Chwala, Held, and DeVoy raced close and intense as Jung pulled away out front. Once the championship contenders approached lapped traffic on lap 29, their race took a turn for the worse. Chwala led DeVoy by about a half car length with Held directly behind as they approached a lapped car and as they tried to thread the needle with the lapped machine on the inside, contact between Chwala and Devoy’s cars sent DeVoy’s car ricocheting off the lapped car and into Held’s machine. Held’s car climbed up the side of Devoy’s car before slamming hard into the turn one wall. Held was not seriously injured in the mishap and quickly exited his car and was animated in his displeasure with the other two drivers as the race was under the red flag. As Held’s damaged car was removed from the speedway, DeVoy and Chwala were sent to the rear of the field for the restart as Jung chose the inside lane for the restart. Schulz and Tyler James also chose the inside lane while Jeff Way and Ryan Gutknecht took to the outside as racing resumed. Now back to green, Jung continued to lead as Way’s car began to drift wide off the turns allowing Schulz to move into second. On lap 30, Way’s car kicked loose again but this time, he spun across the field exiting turn four as the caution waved once again. Jung led on the single file restart over Schulz and over the final laps, Schulz pressured Jung by making some attempts to pass on the inside. Each time however, Jung was able to hold on and he drove to the win as Schulz edged Tyler James in a side by side finish for second. Ryan Gutknecht finished fourth and Brian Holtz was fifth. Jung failed post race technical inspection after the event and was disqualified.

Late model heat races were won by Jake Vanoskey and Dan Jung while Jordan DeVoy was the fastest qualifier with a lap of 12.246 seconds.

Scott Ascher crossed the finish line first in the Area Sportsman 30-lap feature as Paul Wagner and Scott Hoeft followed close behind. Jacob Schraufnagel took the checkered flag in fourth place while Andy Welter was fifth. Following the event the top three finishers failed post race technical inspection and were disqualified. Joe Shelby won the Area Sportsman heat race and Jacob Schraufnagel was the fastest qualifier after touring the speedway in 13.020 seconds.
Tom Berens took the lead on lap four and drove to the victory in the 25-lap Slinger Bee feature over Jakob Hassler and Dale Kiley-Schaefer. Gerald Lyons was fourth and Brandon Tackes finished fifth. Slinger Bee heat races were won by Steve Zoromski and Jakob Hassler while Tom Berens was the fastest qualifier with a lap of 14.422 seconds.

David Prunty won the Spectator Eliminator races with his Chevy Corvette and Joe Mueller won the B-track race for the Figure 8 division cars.