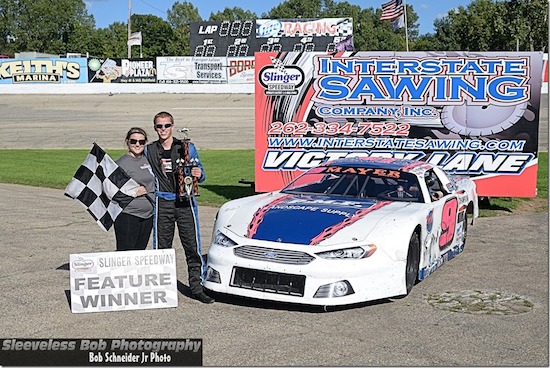 Slinger, Wis., Sept. 11— Braison Bennett threaded his way to the lead in lapped traffic and cruised to the season ending victory in the 40-lap late model feature Sunday afternoon at the Slinger Super Speedway as Kyle Chwala, Andy Welter, Eric Lingford, and Scott Goetzke wrapped up track championships in their respective divisions.

Ryan Gutknecht charged to the early lead at the drop of the green flag as the race quickly fell under caution at the completion of lap one when contact between Jack Stern and Eddie May sent May’s car looping around off turn two. Gutknecht chose the inside lane for the restart as did second running Brian Holtz which left Al Stippich to elect the outside lane from third. Stippich tried to pressure Gutknecht for the lead as racing resumed but Gutknecht proved to be too strong from the inside and he maintained the top spot. Behind the leaders, Braison Bennett began to advance forward as he first made his way around Steven Schulz in fourth and then tracked down Holtz for third. Within a few laps, Bennett caught Stippich for second and he began to reel in Gutknecht for the lead. With the leaders approaching heavy lapped traffic as the laps wound down, Bennett made his move on lap 33 as he moved alongside Gutknecht in turn two. Bennett and Gutknecht raced side by side for the lead with lapped traffic occupying both the high and low lanes in front of them. The inside lane was the place to be as Bennett was able to move ahead of Gutknecht with lapped traffic remaining a factor. When Bennett was able to squeeze ahead of two lapped cars and put them between himself and Gutknecht, he opened up a considerable lead while behind the lead duo, Holtz and Stippich had their hands full with Jordan DeVoy and point leader Kyle Chwala. Once out front, Bennett was never headed and he drove to the win while a frustrated Gutknecht had to settle for second. Brian Holtz finished a strong third and Al Stippich finished fourth in his first race back since suffering a wrist injury earlier in the season. Jordan DeVoy crossed the finish line in fifth while Kyle Chwala’s sixth place effort was enough to earn him the Slinger Speedway late model track championship.

Ryan Gutknecht and Brian Holtz were the winners of the late model heat races and Jordan DeVoy once again was the fastest qualifier with lap of 12.150 seconds.

In addition to his late model duties, Ryan Gutknecht also drove to the win in the 35-lap Midwest Sportsman main event while Eric Lingford’s fourth place finish earned him the track championship for the division.

Landry Potter raced to the lead from the outside groove at the drop of the green flag with Bill Prietzel, Bobby Gutknecht, and Ryan Gutknecht following in line. Prietzel was able to duck to the inside of Potter off turn four to take the lead on lap three and both Bobby and Ryan Gutknecht were quick to follow and move into second and third respectively. While the top three disputed the lead, Shawn Utphall, Eric Lingford and Brian Holtz entered the top six as they attempted to close the distance between themselves and the three front runners. A tangle between Scott Shambeau and Greg Beebe off turn four produced the first caution flag on lap 11 with Prietzel leading over Ryan and Bobby Gutknecht. During the caution period, confusion on the placement of the lane cone resulted in the nose of Ryan Gutknecht’s car becoming lodged in the rear of Prietzel’s machine and the debris was eventually cleared without anyone losing track position. Prietzel chose the inside for the restart but Ryan Gutknecht was strong on the high side and he charged into the lead as racing resumed. Prietzel fell in line behind him in second while Utphal held third which left Bobby Gutknecht and Eric Lingford to battle over fourth. On lap 13, Lingford looked to the inside of Gutknecht heading into turn one and as the cars made contact, Gutknecht spun around and the back of his car was tagged by Cody Clubb. Under the ensuing caution period, Gutknecht tapped his roof, taking blame for the incident and allowing Lingford to maintain his spot for the restart with Ryan Gutknecht leading over Prietzel, Utphall, Lingford, and Holtz. Ryan Gutknecht again charged out to the lead as racing resumed while Utphall and Prietzel raced door to door for second with Brian Holtz directly in their tire tracks. Prietzel’s car kicked loose entering turn one and as he gathered the car up, both Utphall and Holtz charged by while Ryan Gutknecht continued to hold a sizeable lead. Gutknecht’s advantage was erased on lap 27 when the caution waved again when Bobby Gutknecht slowed with mechanical problems and Marty McKinney spun to avoid him in turn one. Ryan Gutknecht was ready for the final laps and he kept the lead as the green appeared and drove away to capture the victory while Holtz and Utphall battled intensely for second. Holtz edged Utphall for the second position, leaving Utphall to finish a strong third while Lingford and Landry Potter rounded out the top five. Lingford’s fourth place finish clinched the track championship for the Midwest Sportsman division.

Scott Shambeau and Bill Prietzel each won a Midwest Sportsman heat race and Ryan Gutknecht was the fastest qualifier with a lap of 12.762 seconds.
Joe Shelby led every lap and scored a dominating win in the 30-lap Area Sportsman feature. Paul Wagner and Jacob Schraufnagel battled throughout the race over second place before Wagner bested Schraufnagel at the finish to claim the spot. Ken Au and Andy Welter rounded out the top five finishers. Welter’s fifth place finish clinched the track championship in the Area Sportsman division. Jay Bleskan and Ken Au were the winners of the Area Sportsman heat races and Jacob Schraufnagel was the fastest qualifier with a lap of 12.860 seconds.

Jakob Hassler won the 25-lap Slinger Bee feature after taking the lead from Tom Berens on lap 20. Berens finished second and wrapped up the track championship in the division. Gerald Lyon finished third and Nick Schmidt and Jayden Buckley rounded out the top five. Slinger Bee heat races were won by Bill Ostovich Jr. and Nick Schmidt while Jakob Hassler was the fastest qualifier with a lap at 14.380 seconds.

Amanda Bohn charged to the lead on lap 13 and never looked back as she drove to the victory in the 20-lap American Super Cups main event. Tony Rendina finished second while Jessica Talley finished third. Kaitlyn Judy and Jim Irish rounded out the top five. Brandon Mennicke and Tony Rendina were the winners of the American Super Cup heat races and Brian Baldyga was the fastest qualifier with a lap at 15.231 seconds.

Scott Goetzke closed out the afternoon and the 2016 season at the Slinger Super Speedway with a victory in the Figure 8 race. Goetzke also clinched the track championship in the Figure 8 division.