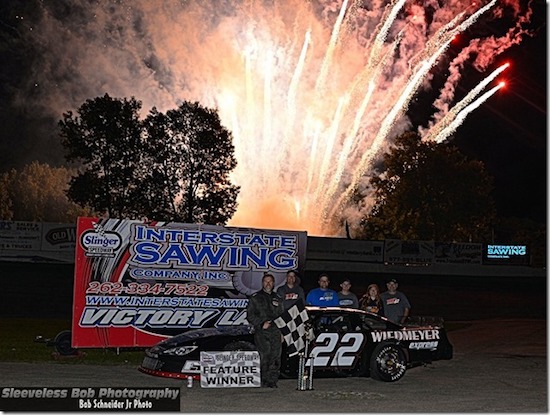 “I thought about slowing down a little bit to see if they could catch me but in the end I just decided to pull away and take care of business,” Prunty stated jokingly from victory lane, after taking the checkered flag ahead of championship contenders Alex Prunty, Chris Blawat, and Steve Apel, “ I was a little irritated in the heat race and didn’t know if we would have the car but I guess we were okay.”

Steve Apel and Mitch McGrath led the field to the green flag and Apel wasted no time in charging to the early lead as Dennis Prunty worked his way around McGrath for second. Prunty quickly tracked down Apel for the lead and was able to turn inside Apel’s door off the second turn to take command of the race on lap five. Behind the top two, Gary LaMonte, Alex Prunty, and Chris Blawat all advanced their way into the top five by lap 20 with Blawat moving up the farthest from his thirteenth starting position. The first caution flag of the race waved on lap 23 for Dan Church’s stalled car off turn four with Dennis Prunty leading over Apel, LaMonte, Alex Prunty, and Blawat. Prunty chose the high side for the restart and Apel went to the bottom in a choice that proved beneficial as when the green flag waved, Apel quickly went back out front. Two laps later however, Dennis Prunty had his car wound up and he once again charged by for the lead. Once out front Prunty began to pull away as Apel fell into a battle for second with Alex Prunty with the younger Prunty taking the spot with an inside move. The rear brakes began glowing cherry red on Apel’s car and he fell into the clutches of Gary LaMonte who charged by for third. The next car in line to challenge Apel for position was Chris Blawat and the battle over fourth place soon became a duel for the track championship as the two entered the evening only five points apart. The two battled fiercely side by side over the position with Blawat nipping Apel for the spot just before the caution flag waved on lap 69 when Mitch McGrath’s car did a half spin in between turns one and two. Once again Dennis Prunty kept the lead over Alex Prunty as the race resumed while Blawat raced into third as Apel became caught in a traffic jam and faded back to sixth. As Alex Prunty tried to challenge Dennis Prunty for the lead, Blawat held off Brad Mueller and Gary LaMonte while Apel began to work his way forward again. A caution flag on lap 75 for a tangle between Nick Wagner and Brad Keith off turn two tightened the field again. This time as Dennis and Alex Prunty raced for the lead, Apel chose the lane that advanced and he found himself in a side by side battle with Blawat for the third position. Once again the championship contenders battled intensely until finally Blawat was able to slide across Apel’s nose off turn four to take the third spot just past the start-finish line. While Apel tried to retake the spot from Blawat, Dennis Prunty began to pull away out front. No one had anything for Dennis Prunty in the closing laps as he drove to his fifth super late model feature win of the season with Alex Prunty settling for a strong second. Chris Blawat held on for third just ahead of Steve Apel which was enough to claim the super late model track championship by a mere seven points. Brad Mueller finished fifth. Mitch McGrath finished sixth followed by Gary LaMonte and James Swan in seventh and eighth respectively. Nick Wagner and Brad Keith rounded out the top ten.

“It was a lot of fun and I thought we dug ourselves a big hole there starting 13th,” An excited Blawat told the crowd after capturing his first ever super late model track championship, “I have a ton of respect for Steve (Apel), Dennis (Prunty), and these guys are a great group to race with…oh man…I love it!”
“It’s heartbreaking and we came up just one spot short, that’s the way it goes,” Apel stated, “it’s been a heck of a battle and we didn’t give up at the end, we just ended up one spot short and it was a great effort by everyone involved.”

“What a year we’ve had, “ said Alex Prunty, who finished third overall in the point standings despite cutting his point deficit nearly in half with his runner-up finish in the feature, “To come out here the first year in the super late and have the successes we had, I’m happy.”

Kyle Chwala extended his point lead in the late model championship standings by winning the 40-lap main event after taking the lead from Dennis Prunty on lap 24. Prunty led the first 23 laps of the race before his car began to drift in the corners, allowing Chwala to charge by into the lead on lap 24. Ryan Gutknecht also worked his way around Prunty for second and began to try to track down Chwala for the lead. Chwala proved to be too strong in the closing laps however and he drove to the victory over Gutknecht with Dennis Prunty finishing third. Brian Holtz and Jordan DeVoy rounded out the top five in fourth and fifth place respectively. Jake Vanoskey and Dennis Prunty each won a late model heat race and Jordan DeVoy was the fastest qualifier once again with a lap of 12.158 seconds.

Mark Deporter led every lap of the 30-lap Area Sportsman feature to capture his first Slinger main event win of the season. Paul Wagner was glued on Deporter’s bumper for most of the race but had to settle for second place at the checkered flag. Jake Schraufnagel finished in third ahead of Joe Shelby and Adam Bleskan. The Area Sportsman heat races were won by Jay Bleskan and Michael Gilomen and Jake Scraufnagel was the fastest qualifier at 12.934 seconds.

David Prunty drove his Corvette to victory in the Spectator Eliminator races and Willy Van Camp closed the night with a victory in the Figure 8 race.