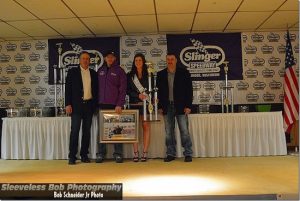 Slinger Speedway officially closed its 68th season by crowning last season’s champions Friday Todd Thelen and Rodney Erickson greeted all and thanked the racers, track sponsors, employees and safety crew for their support. A hearty meal, lots of door prizes and many interesting stories dotted the festivities as drivers from six divisions accepted their rewards.

Tom Berens earned his second HEROS Bee title and looks forward to entering a new category in 2017. “It was a good season,” began Berens, bringing laughs from the audience when adding, “I only totaled the car once and restubbed it once.” Jerry Lyon earned Rookie of the Year honors, telling the crowd, “It was a good first season for me. It was my first year sitting in a race car.”

Andy Welter received his first Area Sportsman crown and surprised many with his remarks. “I don’t deserve this whatsoever,” began Welter, claiming, “There were plenty of nights I wanted to give up and stay home. My brother and crew got me out there and I got through it.” Jacob Schraufnagel earned Rookie of the Year honors and plans to return for the 2017 season.

Scott Goetzke set another record by earning his ninth Figure 8 championship. In a humorous moment for his fellow competitors, Goetzke stated, “I want to thank these guys for sucking so bad it made me look good.”

Eric Lingford earned his first Midwest Sportsman title and was very grateful for it. “Most and foremost,” Lingford stated, “Thank the employees and safety crew at Slinger, my crew for their dedication and my outstanding fans. If it weren’t for them, I wouldn’t be standing here.” Runner-up in the final points, Ryan Gutknecht told the crowd, “I’ve known Eric (Lingford) since we were kids. He actually bought my old race car to start racing. Congratulations to him.”

Kyle Chwala earned his first Late Model title and began, “Me and my dad had a pretty big heart to heart talk in June. I doubted if I had the talent. He said I could do it. So did Dan and Sonya (DelCamp, Team 16 car owners). That meant the world to me. Then we won and things were fun. We had a blast. I want to thank my mom and dad for pushing me. My dad always said if you’re going to do something, do it right. Everyone at Team 16, I couldn’t do it without them. Slinger has the best safety staff around. Thank you guys.” Chwala then surprised the DelCamps with a duplicate championship trophy as the room cheered.

Ryan Gutknecht was named Late Model Rookie of the Year, stating, “Anybody who’s built one of these knows it’s not easy. We spent all winter putting this car together and it turned out pretty good. To be able to run a late model is something we’ve never done before. To finish in the top five means a lot to us. Thank you.” Jordan DeVoy finished second in the point standings, claiming, “I’m honored to be runner-up. Congratulations to Kyle (Chwala). We achieved out goals of improving and being better in every category. My brother came up from North Carolina to help me and does all my social media. I couldn’t do it without him.”

Chris Blawat edged out repeat champion Steve Apel during the last race of the season to earn his first Super Late Model championship. Blawat said, “Thanks to the Slinger staff. I’ve never been involved in a championship battle like that before. I got to thinking about it. It was a long journey. I started in 1999. It was a lot harder than I thought. I was running with all the people I used to read about. I remember the first time I came to Slinger Donovan Morgan asked me why the car was so high off the ground. I told him it was because the jack wouldn’t fit under it and he helped me. Al Schill helped us get set up and so did Lowell Bennett. I got help from a lot of drivers.” Blawat told the audience, “ I delivered pizza to earn money and used that to buy my first race car. Then I did something I don’t recommend to anyone. I took out a loan to buy a truck and trailer to tow the car. We paid that off, got a lot of help from a lot of people.” Recalling a time when he was ready to quite, Blawat continued, “My wife told me to build a new car. My crew keeps showing up and putting in the work. When this journey began a championship was the last thing I thought of. All the highs and lows, I wouldn’t change anything.

Alex Prunty finished third in the final points and earned Super Late Model Rookie of the Year honors. This was done during a season he was chosen for the Alan Kulwicki Driver Development Program. “To say there was a lot of pressure on my would be an understatement,” began Prunty. “Being in the Kulwicki program was a lot of pressure. My father, my brother, my uncles all helped. Thanks to my mom for letting Dad help me out. This is all we do.”

After losing the tight title battle on the final night, Steve Apel stated, “This year was not one we wanted to remember. I had to drive Duke Long’s car for two night because we wrecked so bad. We had quite a battle with Chris (Blawat). It was a heck of a race. Congratulations to him. We have another child coming this year, whether it’s a boy or girl we don’t know yet. Hat’s off to Chris. He deserved it.”

Dennis Prunty finished fourth in Super Late Model points, joking, “This is the first time I wore a tie to one of these. I tied it myself and I’m pretty proud of that,” adding that he won’t run here weekly, but will return to Slinger every chance he gets.

Brad Mueller completed the top five in Super Late Model points and recalled, “The first time I was up on this stage was 1994 when I was where Alex (Prunty) is tonight. Racing Saturday at Plymouth (Dirt Track) and Sunday at Slinger is tough. It’s a lot of work. I wouldn’t even be asphalt racing if it wasn’t for this place. It’s an honor to race here.”

The room was filled with friendship and conversation, hopefully the warm afterglow aiding all back home on the foggy night. April will be here before we know it and Slinger Speedway will open its doors for the 69th season. The 2017 opener will be Sunday aftenoon April 30. The SUPERSEAL Slinger Nationals will be July 18 and SlamFest will be August 19. www.slingersuperspeedway.com