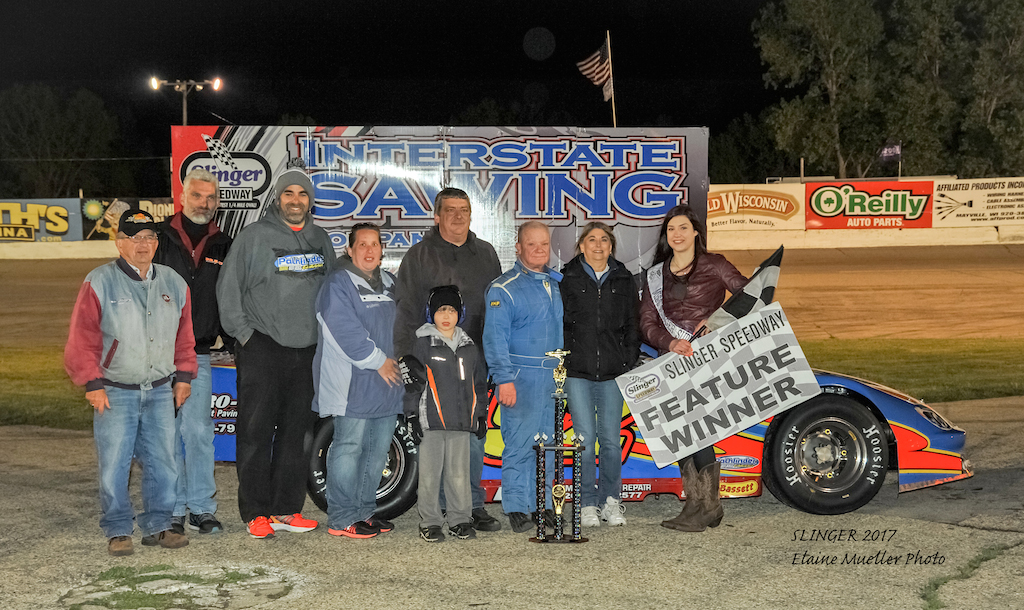 By Dan Margetta
Slinger, Wis., May 21—Just under a year removed from suffering serious injuries that threatened his career, legendary driver Conrad Morgan let the racing world know he was back Sunday night at the Slinger Super Speedway has he drove to a flag to flag win in the Alan Kulwicki Memorial 60-lap super late model feature event.

“I’m wore out,” the veteran driver stated from victory lane after taking the victory over Ryan DeStefano and Gary LaMonte as he seemed to grasp the moment of capturing the super late model feature checkered flag in this his 51st year of competition and following his long recovery, “You don’t dare…you can’t give these young guys a chance because if you do you’re not going to win. I knew I was going to have to drive for everything that car was worth from lap one to lap sixty.”

“There’s been a ton of work into this car since last June,” Morgan continued, “It took us eleven months to get this car where it is today and it’s the best car I’ve ever driven.”

“I had some doubts about coming back from about July to December and I didn’t know if I was going to be able to do it,” Morgan explained describing his recovery time, “Once I got into January, I started to feel better and when I came up here and hot lapped the car about a month ago the car was so good and I felt so comfortable in it I just had to get over the anxiety of racing around other cars and I think I’ve managed that.”

Morgan charged to the lead at the drop of the green flag and scooted out front over Ryan DeStefano while Alex Prunty, Brad Mueller, and Gary LaMonte began to work their way forward from deeper in the field. By the halfway mark, Morgan maintained his lead over DeStefano who remained within striking distance as LaMonte first went to work on Mueller to take over fourth place. A few laps later, with Morgan continuing to lead, LaMonte caught and passed Prunty for third as the lead cars worked their way through lapped traffic. While DeStefano remained is Morgan’s rear mirror over the closing laps, he was unable to make a serious bid for the lead as Morgan drove under the twin checkered flags for the victory. DeStefano finished a strong second while LaMonte charged from his sixth row starting spot to finish third. Alex Prunty and Brad Mueller rounded out the top five while Brad Keith and Fred Winn were sixth and seventh respectively. Grant Griesbach, Chris Blawat, and Rob Braun completed the top ten finishers.

Super late model heat races were won by Mike Egan, Chris Blawat, and Brad Mueller and Gary LaMonte was the fastest qualifier with a lap of 11.268 seconds.

Jordan DeVoy raced into the lead at the halfway point of the 40-lap late model main event and drove to his first victory of the season over Kyle Chwala.

Brian Holtz paced the early laps over Kyle Chwala before the first caution flag waved on lap 11 for when E.J. Waldron’s car looped around in turn four. A lap after the restart, Kyle Chwala worked his way around Holtz for the lead on the outside just before the caution flag appeared again when Tyler James and Jakob Hassler tangled in turn three. Chwala maintained the lead as racing resumed as Jordan DeVoy began to advance forward to challenge the leaders. Another caution flag on lap 18 for an incident between Jack Stern and Adam Peschek slowed the event once again and this time when racing resumed, DeVoy was able to work his way by Chwala and into the lead. Chwala made numerous attempts to retake the top spot during the waning laps but he came up short at the finish as DeVoy drove to the victory. Al Stippich finished a strong third followed by Ryan Gutknecht and Shaun Scheel in fourth and fifth respectively.

Adam Blesken drove to his first feature win of the season in the 30-lap Area Sportsman main event, holding off the challenges of Jay Kalbus at the stripe. Kalbus finished a strong second while Andy Welter, Scott Ascher, and Paul Wagner completed the top five finishers. David Borntreger and Jay Kalbus were the winners of the Area Sportsman heat races and Andy Welter set fast time at 12.854 seconds.

Scott Goetzke closed the evening with a last lap win in the Figure 8 event.