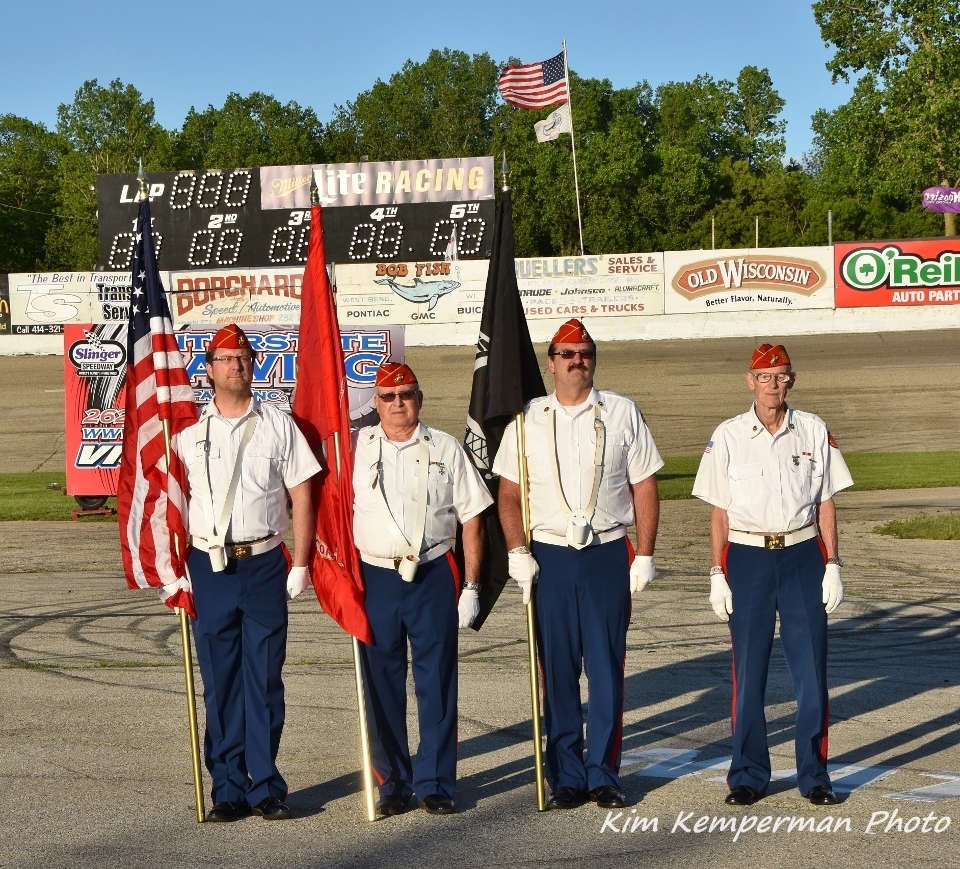 By Brian Schmitt
Slinger, WI. May 28th. Early morning rain gave way to a beautiful Sunday evening as we gathered to pay tribute to those who gave the ultimate sacrifice on this Memorial Day weekend Sunday night. EH Wolf and Sons 75 lap Super Late Model feature highlighted the evenings events.

Super Lates
Grant Griesbach and Alex Prunty led the field to the green flag in the 75 lap feature. Caution would fly on lap 2 for an incident involving Ryan DeStefnao. He would retire from the event with right front damage. Dennis Prunty started his move to the front passing Alex Prunty on lap 12 before another caution flew on lap 14 for a Jeff Holtz spin. Steve Apel moved into 3rd by the time that caution flew. Another caution flew on lap 18 when Steve Apel and Alex Prunty got together in turn 4. Chris Blawat was also involved sustaining major front end damage ending his night. During that caution period oil from the Randy Schuler’s car was found on the racing surface and was the reason for the caution giving Apel and Alex Prunty there spots back. The feature from that point on went caution free seeing Apel move to 2nd on lap 22 and Gary LaMonte to 3rd on lap 26 setting up a thrilling battle over the final 49 laps. Dennis Prunty was able to hold off both Apel and LaMonte to pick up his first feature win of the season at Slinger in his first appearance.. “Its just great to finish a feature” Dennis said in victory lane referring to his early season struggles in the ARCA Midwest tour. “I hope to be back next week to try it again” Prunty announced. Steve Apel continued his early season success finishing 2nd with LaMonte ending up 3rd. Brad Mueller finished 4th with Alex Prunty rounding out the top 5. Jeff Holtz won the 30 lap semi feature. Dave McCardell, Cole Rouse and Randy Schuler transferred to the main event along with Holtz. Heat race winners were Jacob Vanoskey, Fred Winn, and Ryan DeStefano. Steve Apel and Gary LaMonte tied in qualifying with 11.365 laps. Apel turned the lap first and was awarded the fast qualifier.

Late Models
Jack Stern and Chris Ratajczyk led the field to green in the 40 lap late model feature. Ratajczyk jumped to the lead. Caution on lap 11 for an incident involving R.J. Braun slowed the field, Tyler Schley jumped to the lead on the restart and was in cruse control until Zach Braun spun in turn 2 with no where for Schley to go he pounded Braun and ended his night. Ryan Gutknecht inherited the lead on the lap 26 restart and faced a furious challenge from Adam Peschek. Jack Stern joined the fight with 2 laps to go giving Gutknecht some breathing room to pick up the win. Stern and Peschek came to the line side by side with Stern edging out Peschek for 2nd.
Brian Holtz won the 20 lap semi feature. Tom Jasinski, Nick Roehl and Zach Braun were the other transfer cars.
Heat race winners were Brian Holtz, Eddie May, and Tyler Schley. Jordan DeVoy picked up fast time with a lap of 12.057.

Midwest Sportsmen
Ryan Gutknecht took the lead from Paul Wagner on lap 19 and ran away to a convincing win in the 35 lap Midwest sportsmen feature event. Heat race winners were Kenny Joosten and Jimmie Evans, Qualifying was canceled.

Slinger super Beez.
Tom Berens took the lead from Steve Zoromski on lap 8 and held off a challenge from Scott Hoeft on a lap 19 restart to win the 25 lap Super Beez feature, Heat race winner was Steve Zoromski. No qualifying was held. 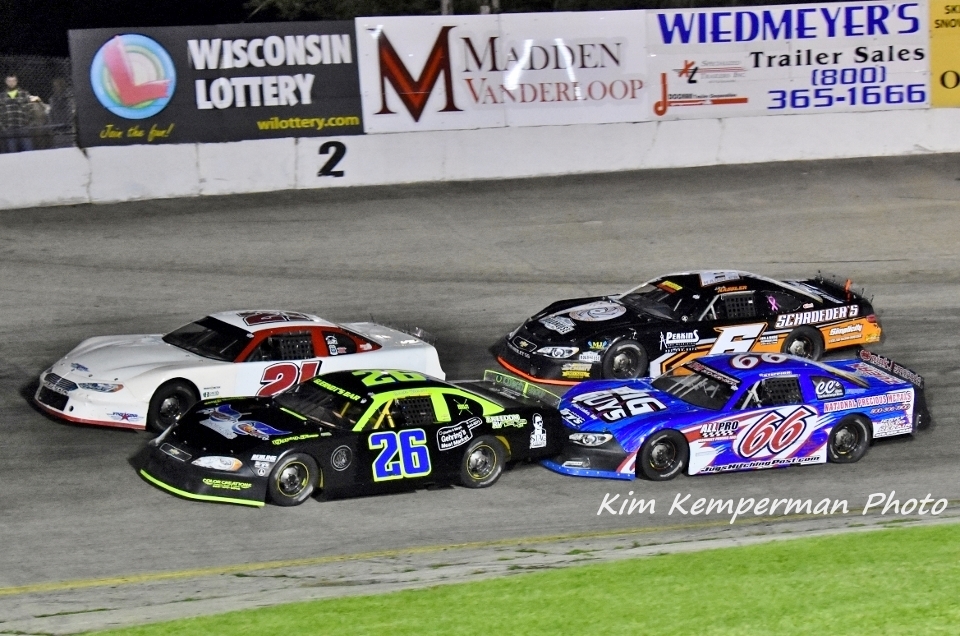 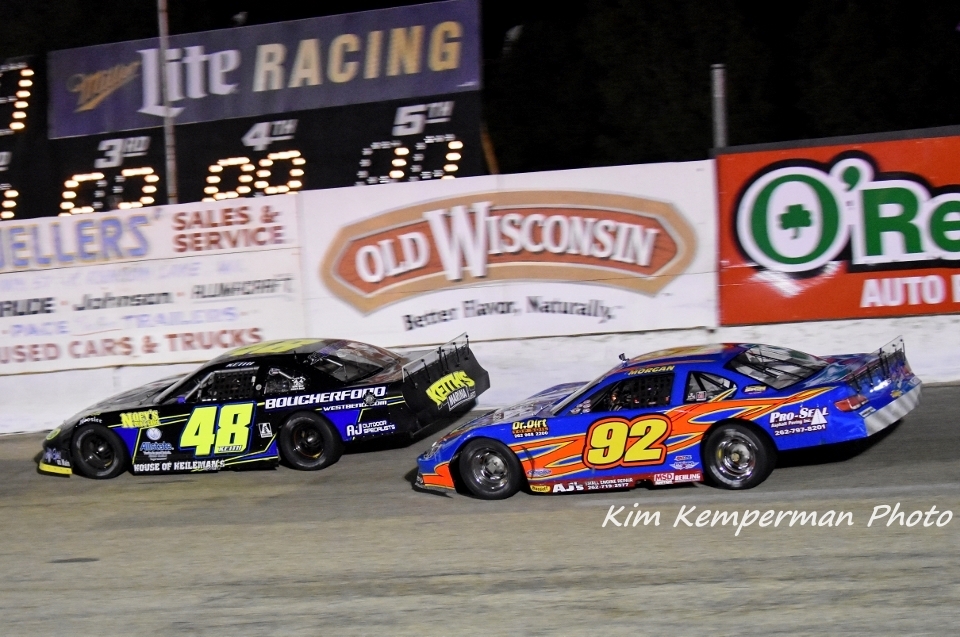 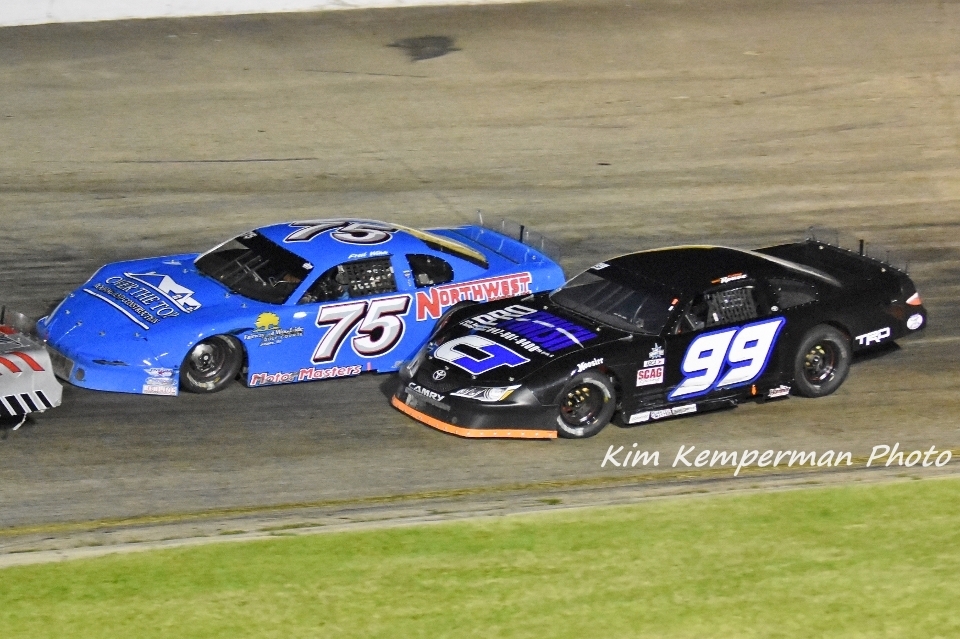 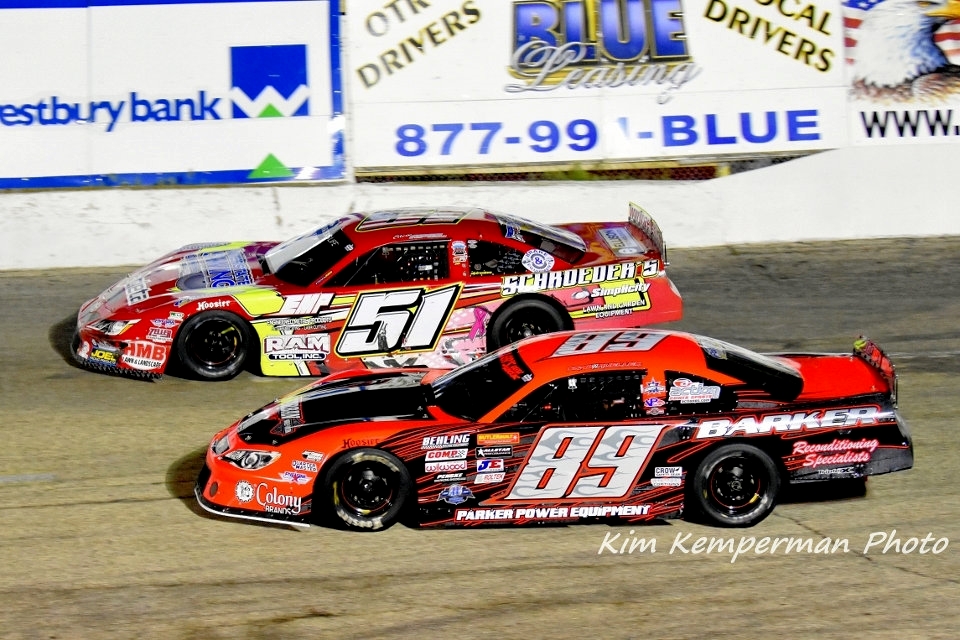 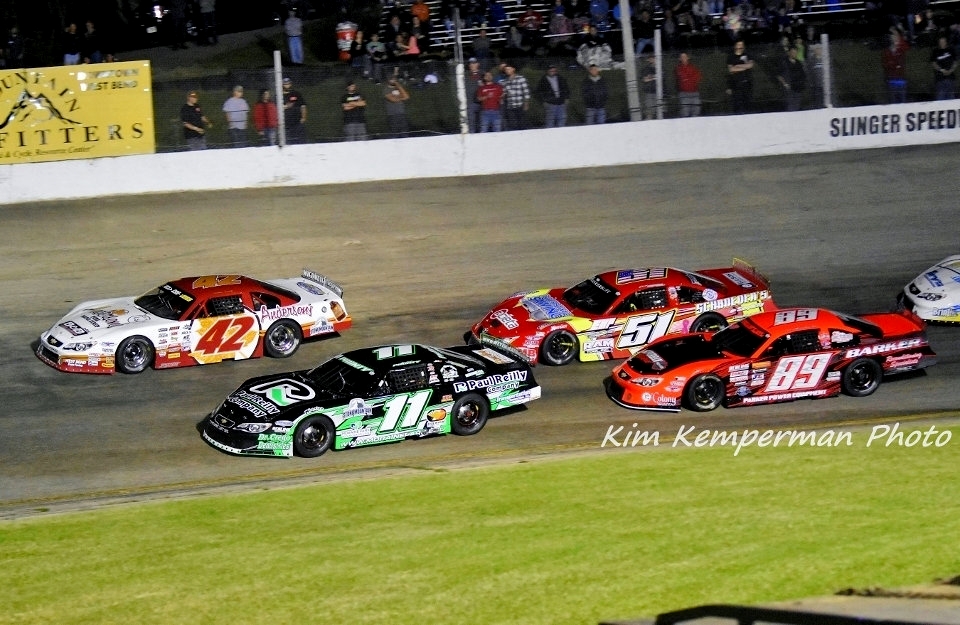 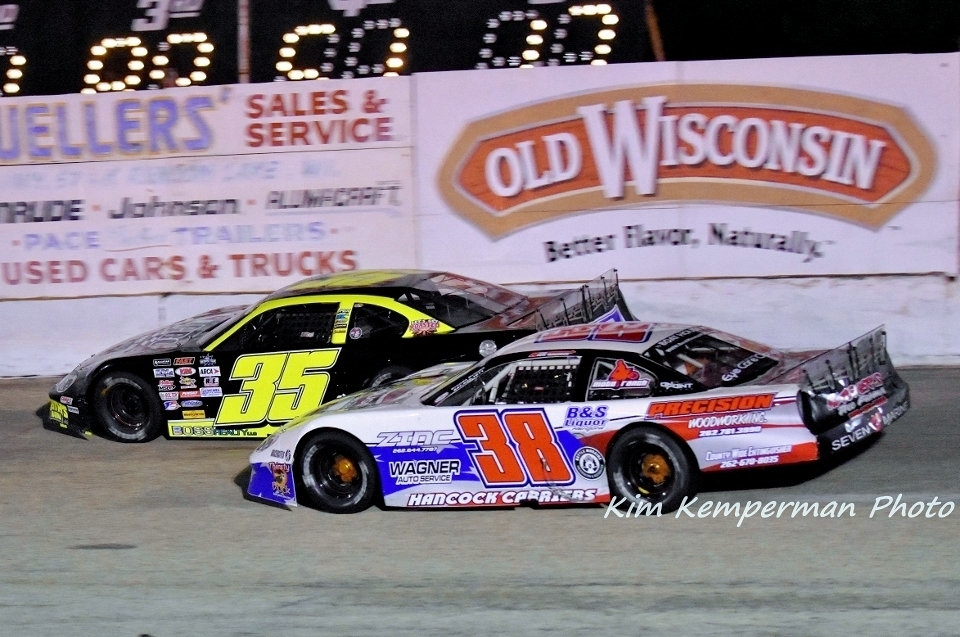 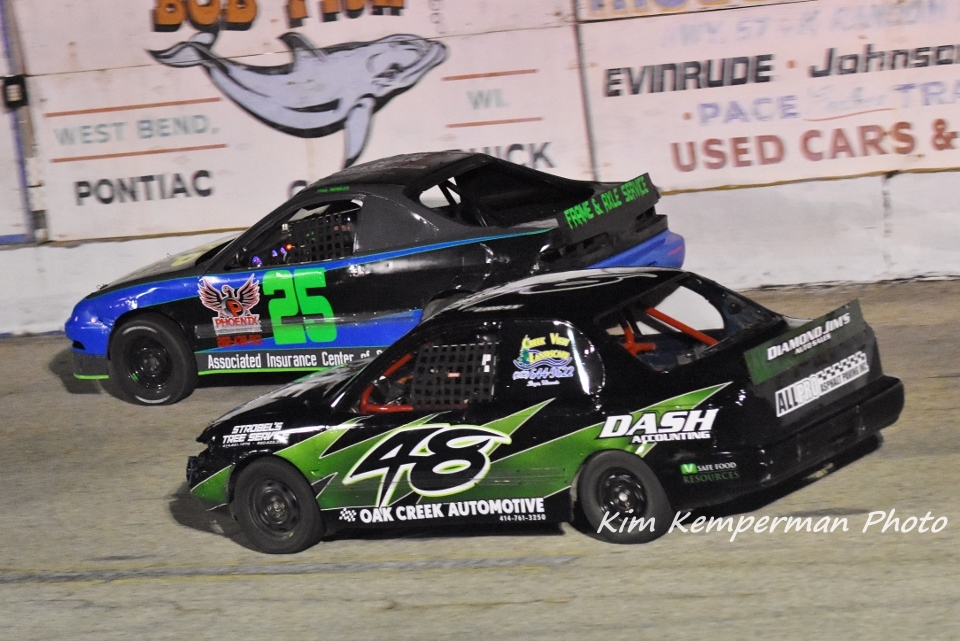 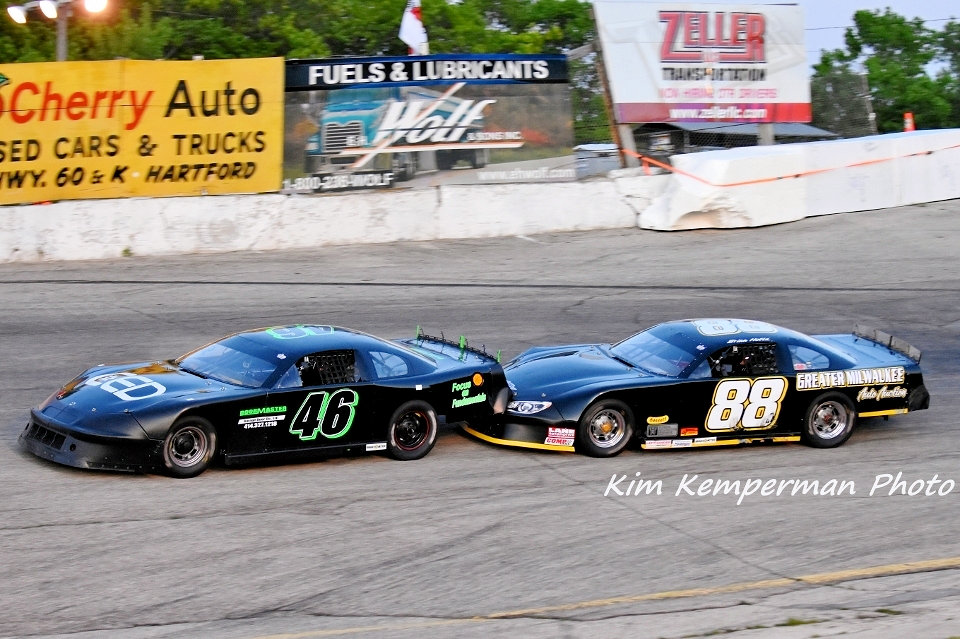 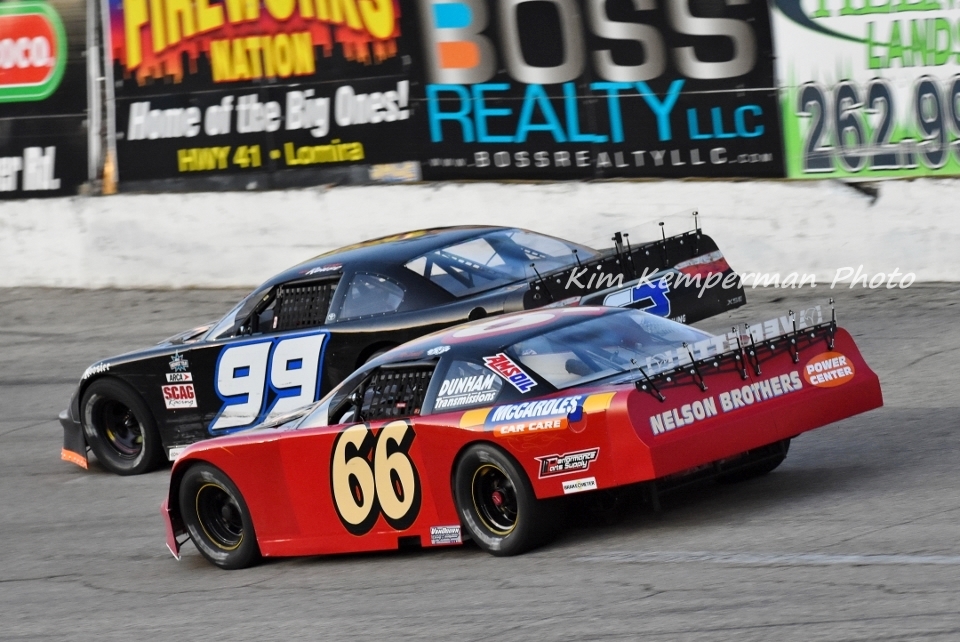 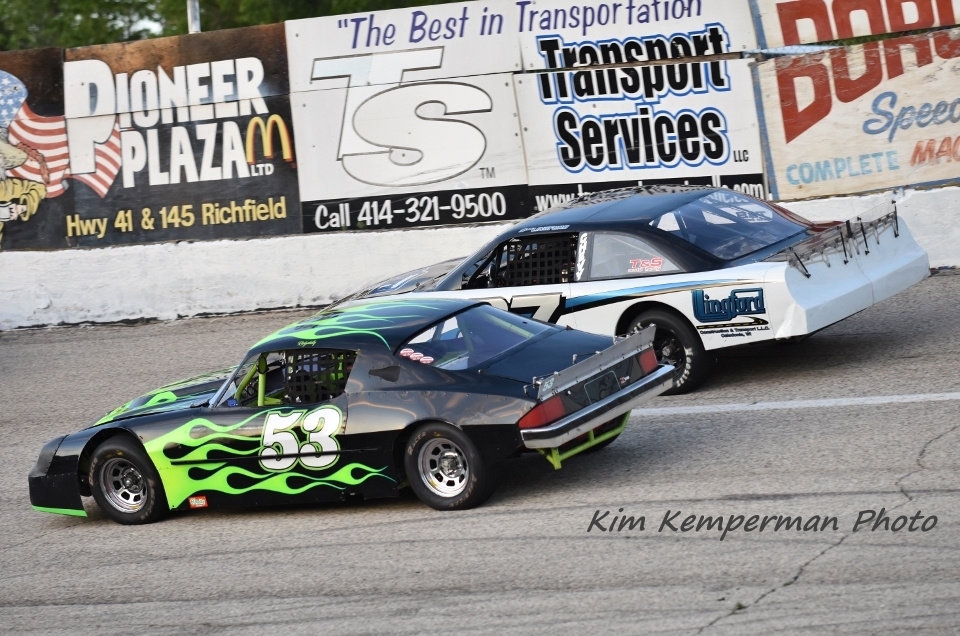 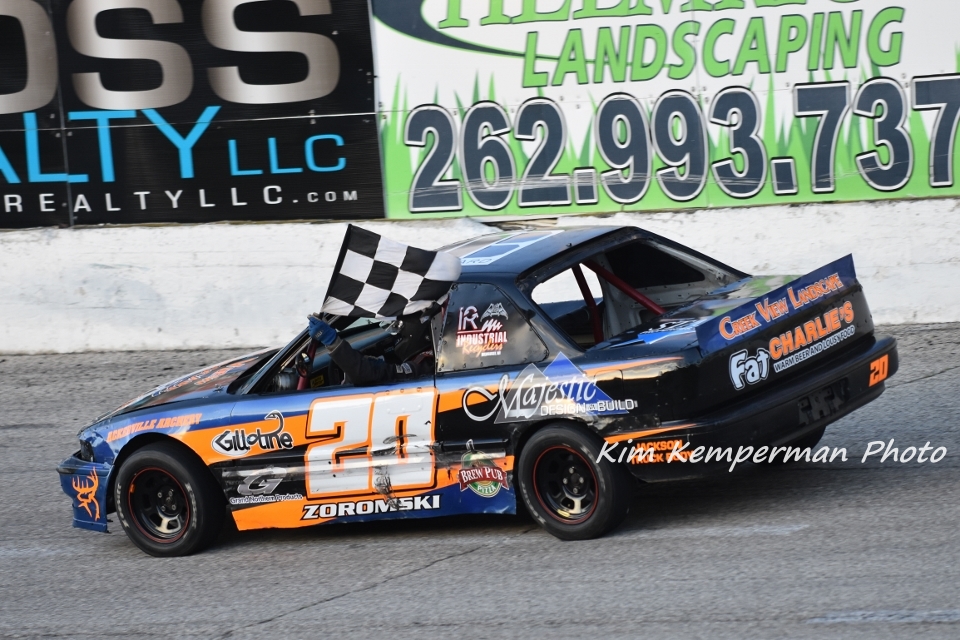 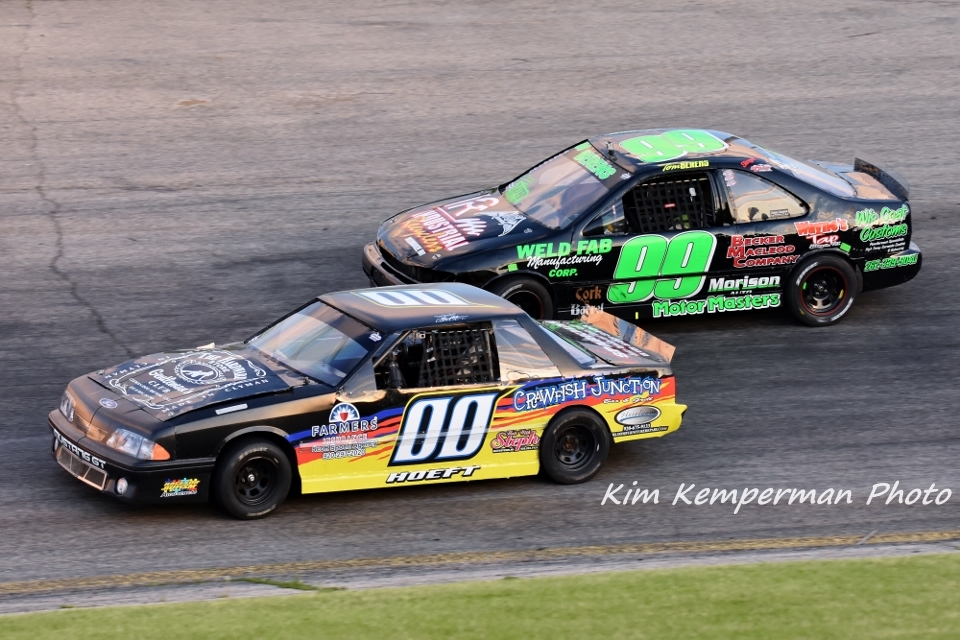 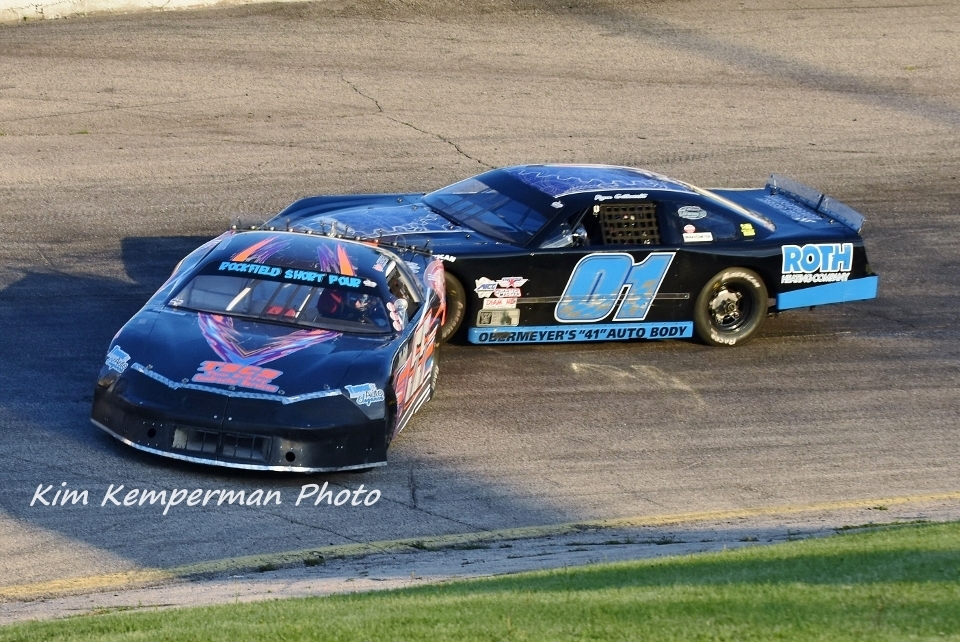 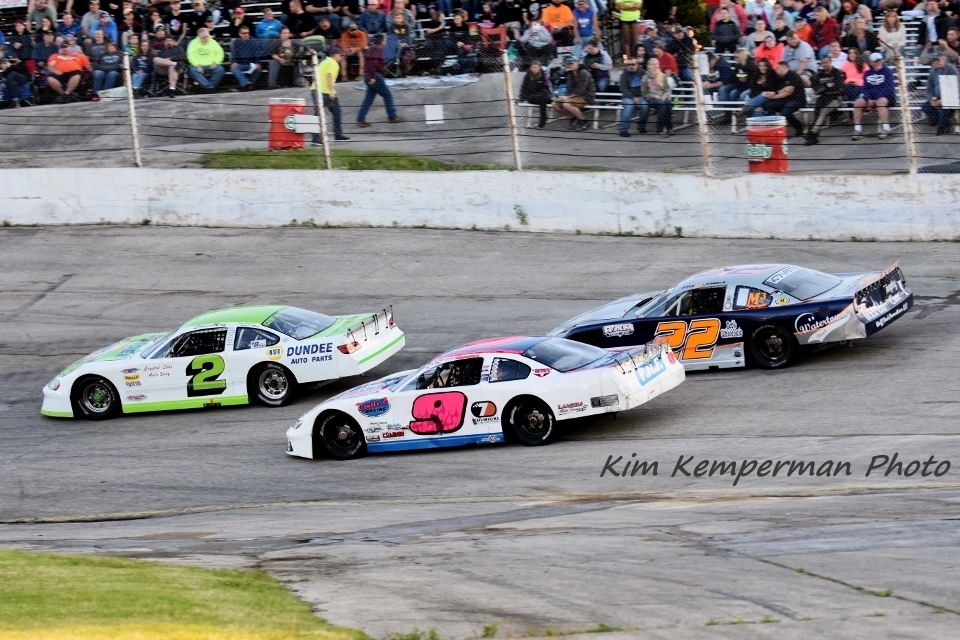