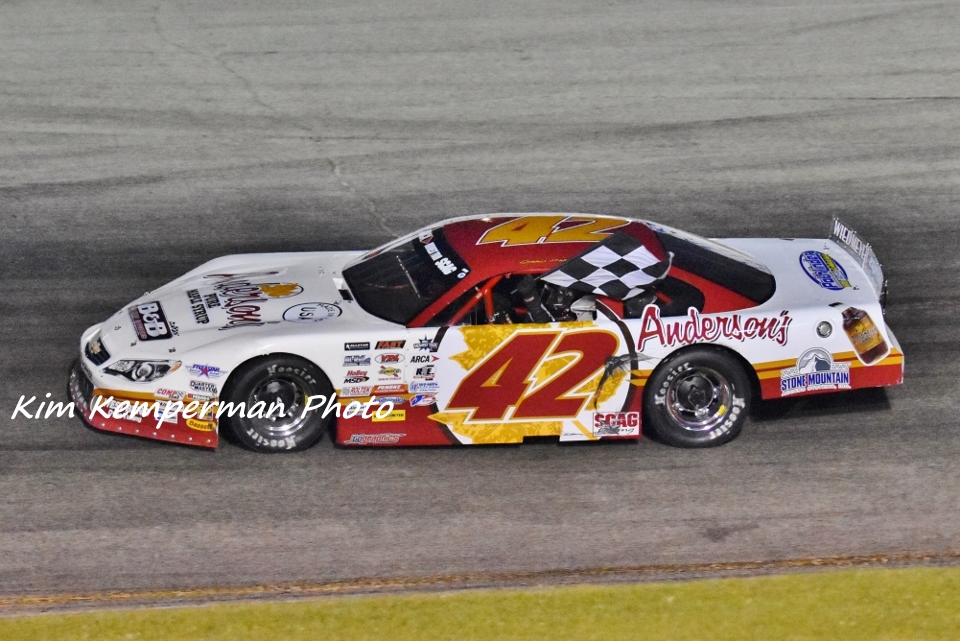 By Dan Margetta
Slinger, Wis., July 9—Dennis Prunty charged to the lead early and drove to a convincing victory in the 60-lap super late model feature Sunday night at the Slinger Super Speedway during the second round of the Pepsi Triple Challenge.

“I’ve won this quite a few times, the one before the (Slinger) Nationals, so I’m excited and I’m thinking we’re pretty good so we will see how it goes, “ Prunty told the crowd from victory lane.

Rob Braun and Michael Bilderback brought the field to the green flag and Braun jumped out to the early lead while Dennis Prunty worked the inside lane to grab second, leaving Bilderback to battle with Ryan DeStefano, Grant Griesbach, and Gary LaMonte over third. Griesbach’s car looped around between turns one and two as the result of the hard racing for position and the first caution flag waved on lap three. Braun chose the inside for the restart while Prunty elected the outside and as racing resumed, Prunty was able to edge out front at the completion of lap four as DeStefano began to challenge Braun for second. Behind the top three, Bilderback, Alex Prunty, and Steve Apel battled over fourth and once again the close racing between them sent Prunty’s car sliding sideways through turn one as the field scattered behind to draw the second caution flag of the race. Dennis Prunty chose the outside lane for the restart and maintained the top spot as the green flag waved while Bilderback also used the outside to edge by Braun for second with DeStefano and Travis Dassow close behind just ahead of Apel and Chris Blawat. DeStefano had the inside groove working and was able to move by first Braun and then Bilderback for second place while Blawat and Apel began their move toward the front. Blawat and Apel both moved past Braun and Bilderback and into third and fourth place respectively within a few laps while Dennis Prunty stretched his lead out front. The best battle on the speedway in the closing laps was between Brad Keith and Brad Mueller as they fought for the fifth position. With the event running caution free for the final 55 laps, there was no catching Dennis Prunty as he cruised to the victory. Ryan DeStefano finished a strong second and Steve Apel crossed the finish line in third just ahead of Chris Blawat in fourth. Brad Keith edged Brad Mueller at the stripe for the fifth position and Alex Prunty and Gary LaMonte made impressive charges from the back of the field to finish seventh and eighth respectively. Grant Griesbach and Michael Bilderback rounded out the top ten finishers.

Ryan Gutknecht took the lead just past the halfway point and went on to score the win in the 40-lap late model feature over R.J. Braun who led the early laps. Last week’s feature winner Kyle Chwala finished a strong third after starting deep in the field while Jack Stern and Al Stippich rounded out the top five. Brian Holtz finished sixth followed by Nick Roehl and Tyler Schley in seventh and eighth respectively. Shaun Scheel and Brody Willett completed the top ten.

Shaun Scheel won the 20-lap late model semi-feature over Ryan Lovald and Nick Wendt while Tyler Hromadka and Scott Patrick rounded out the top five. Late model heat races were won by Shaun Scheel, Nick Roehl, and E.J. Waldron while Brian Holtz was the fastest qualifier with a lap at 12.337 seconds.

Terry Ciano won the 25-lap Slinger Bees feature over Matt Urban and Ricky Gebhard. Zach Greer was fourth and Brian Stanczyk was fifth. Slinger Bees heat race victories were picked up by Al Strobel and Terry Ciano while Matt Urban was the fastest qualifier at 15.184 seconds.

Scott Roberts won the Spectator Eliminator races in his 1987 Chevy Camaro and Ryan Lovald closed the evening with a victory in the Figure 8 race. 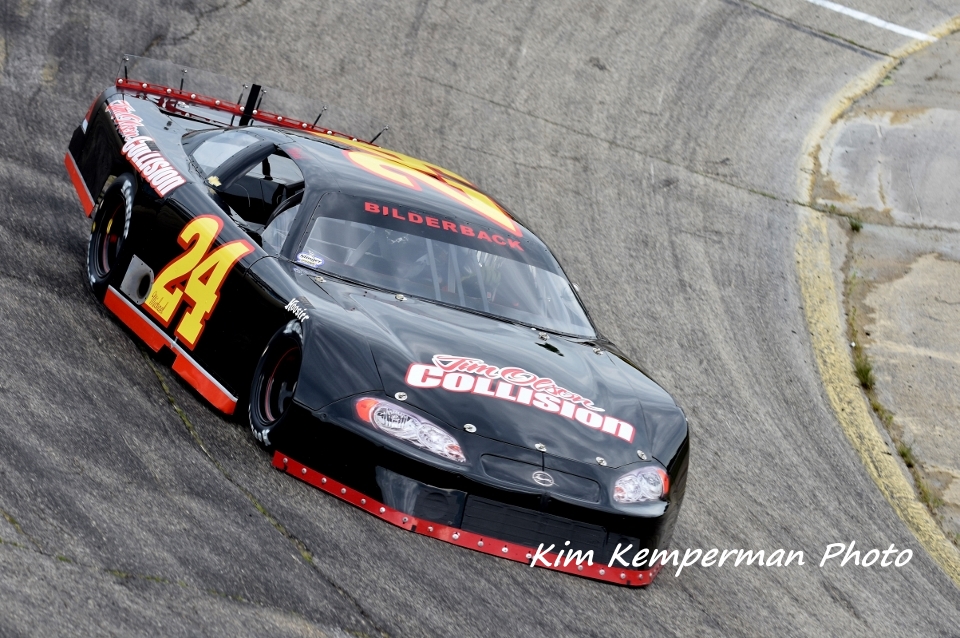 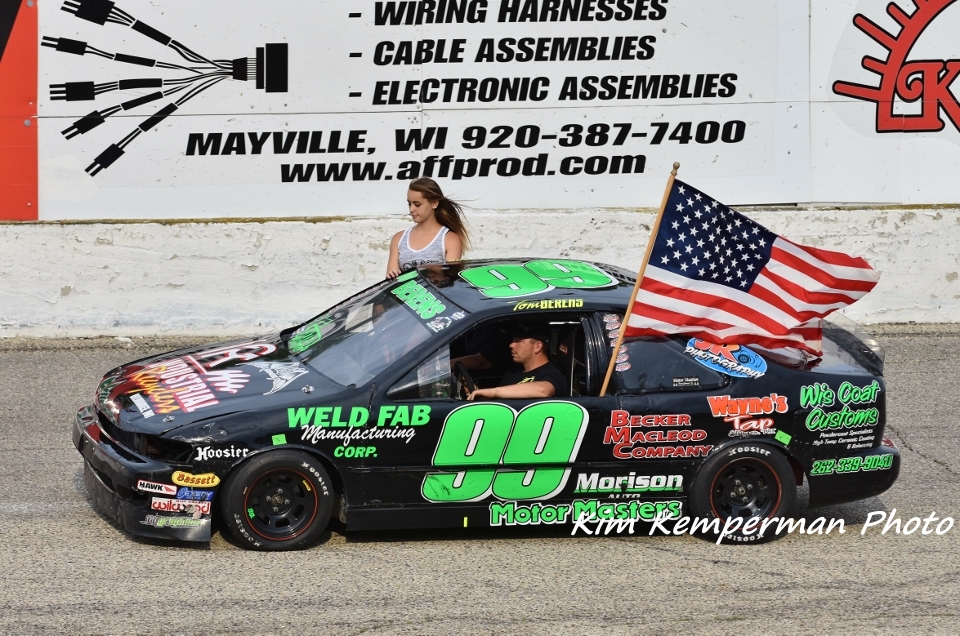 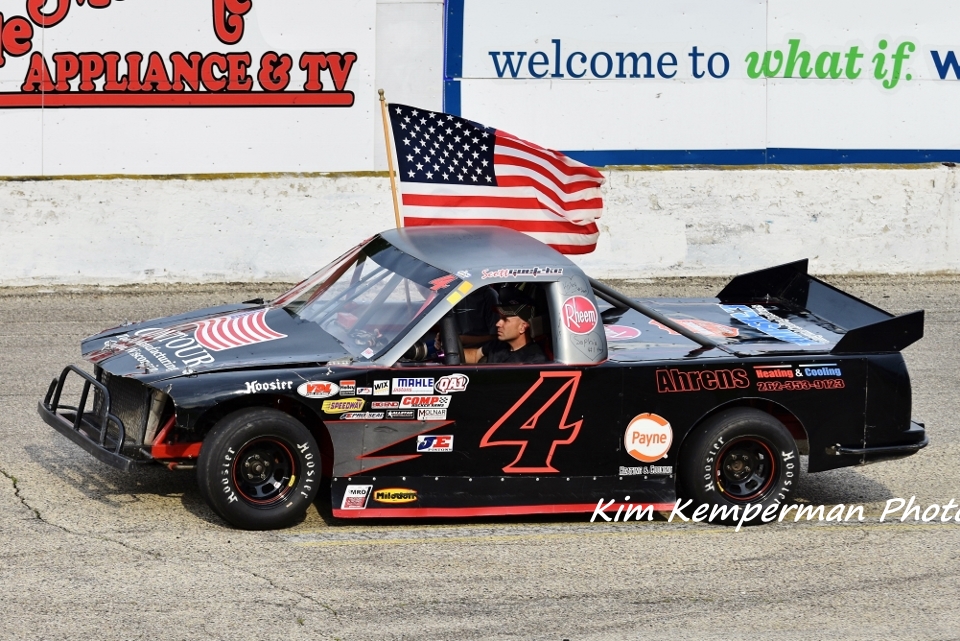 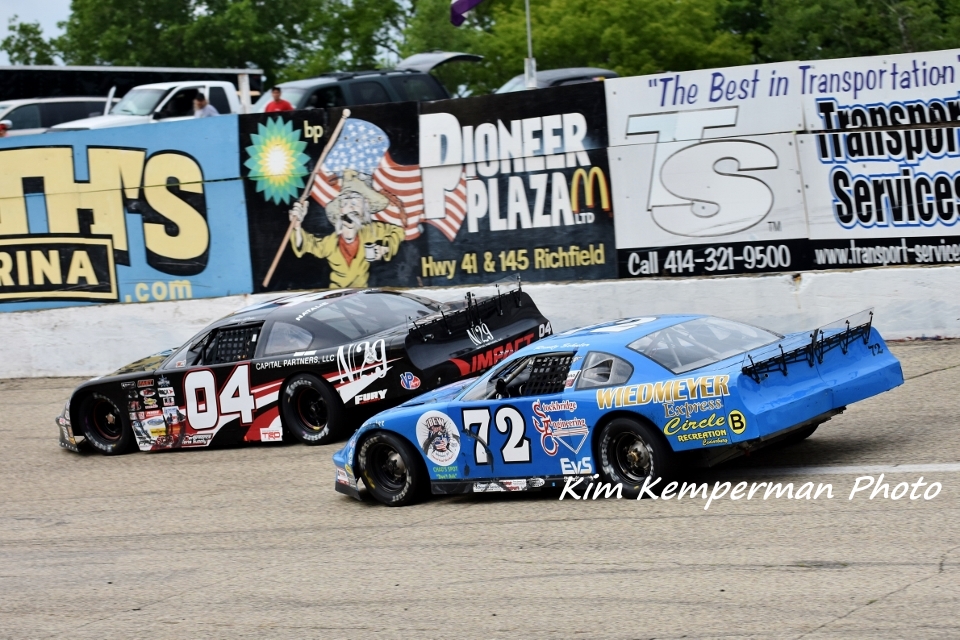 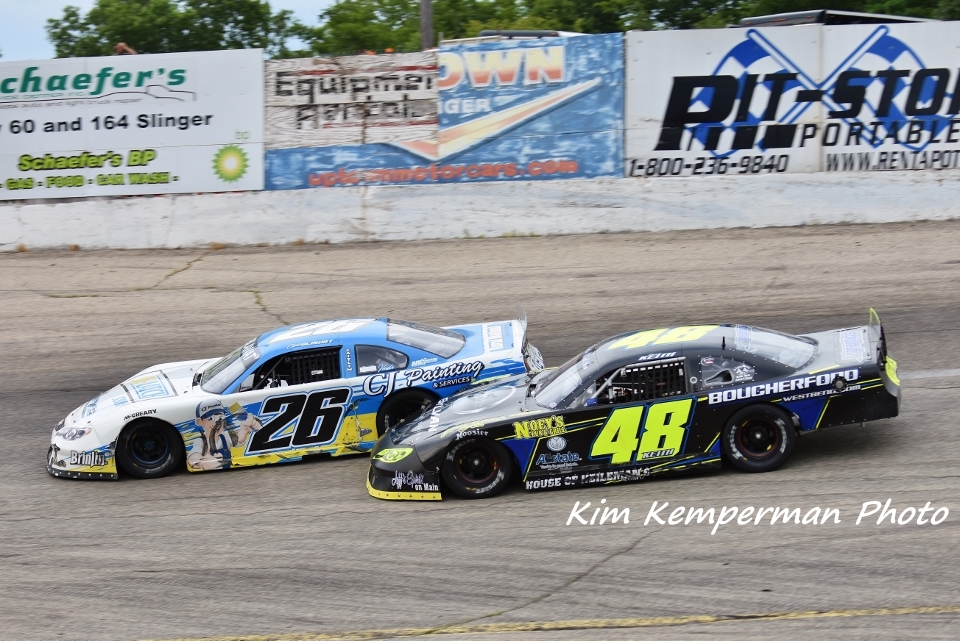 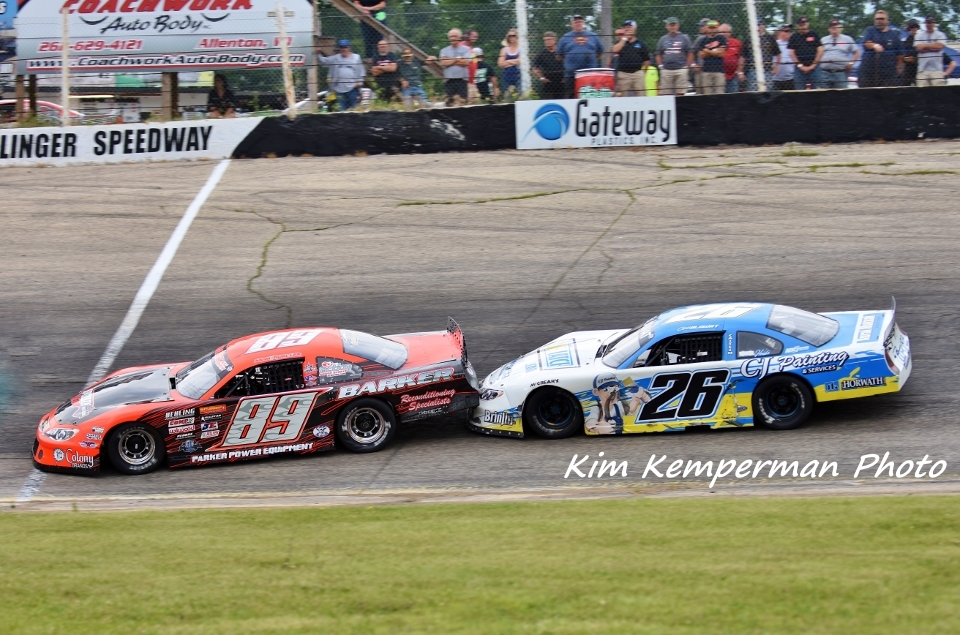 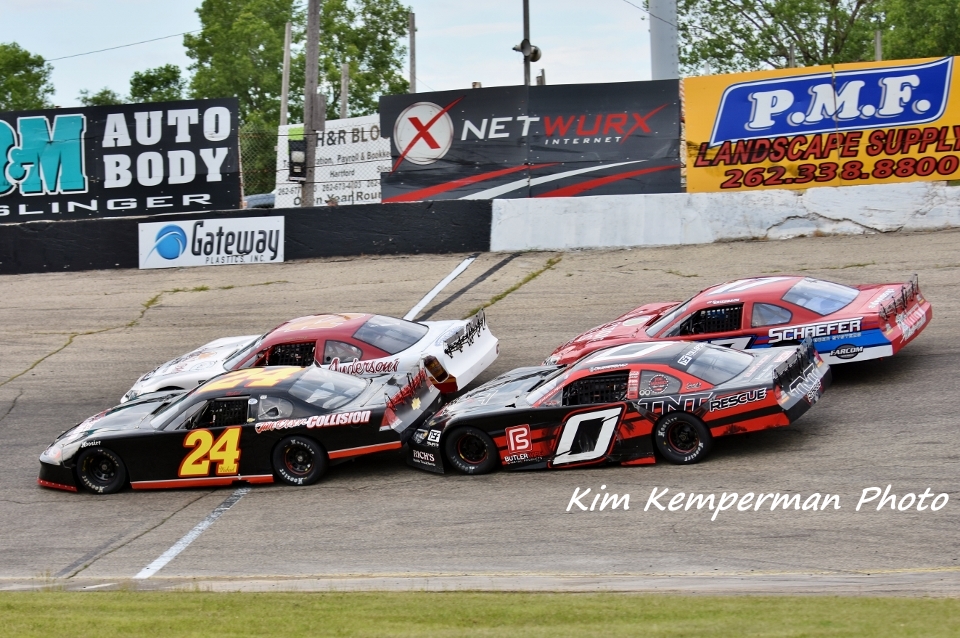 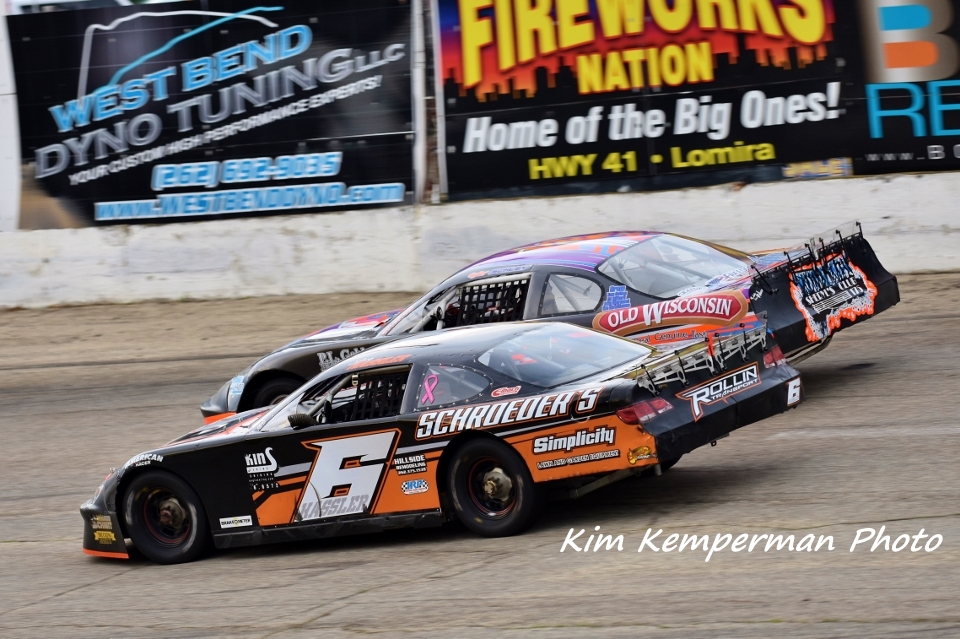 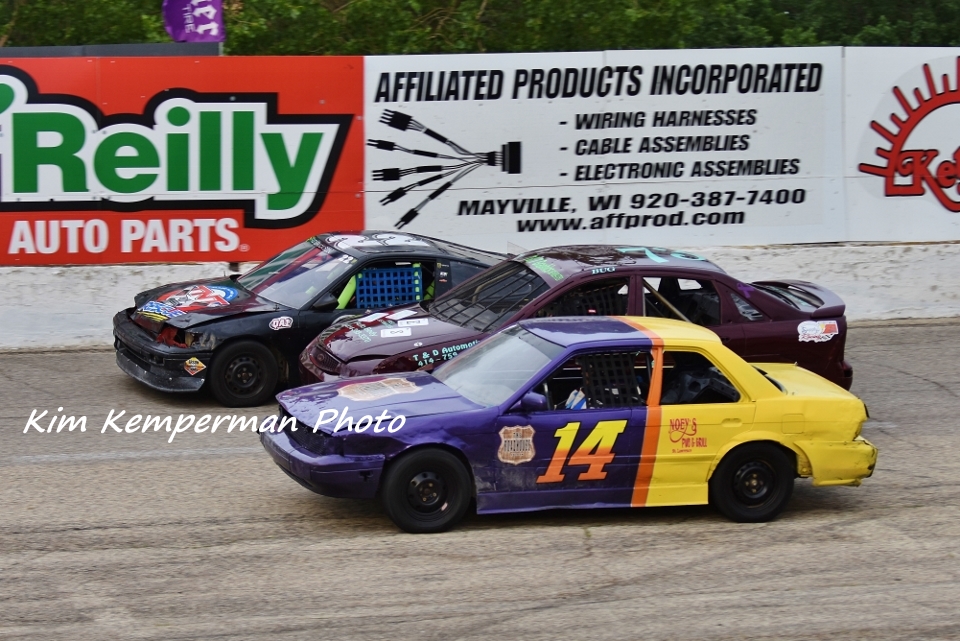 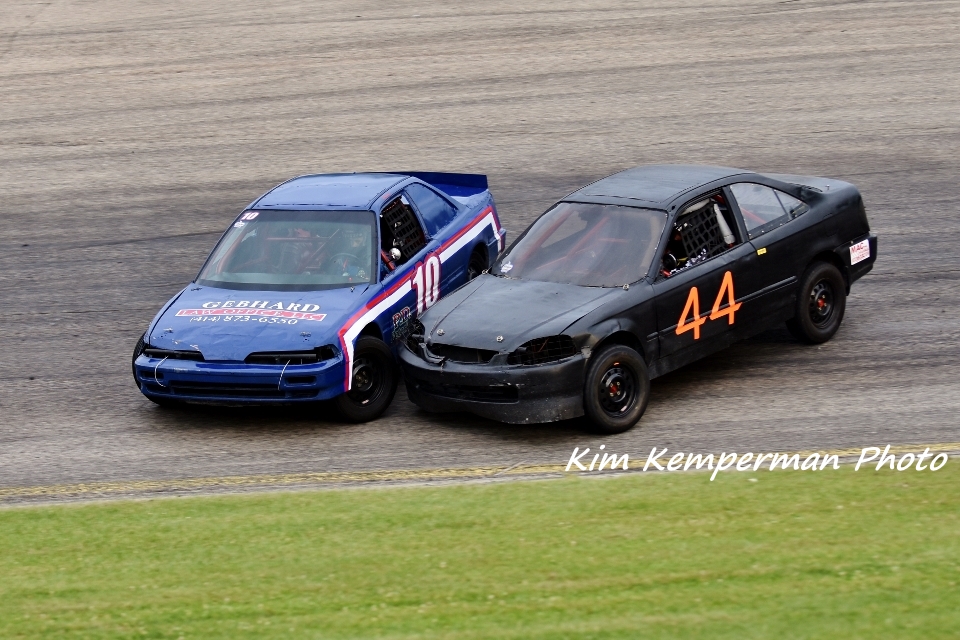 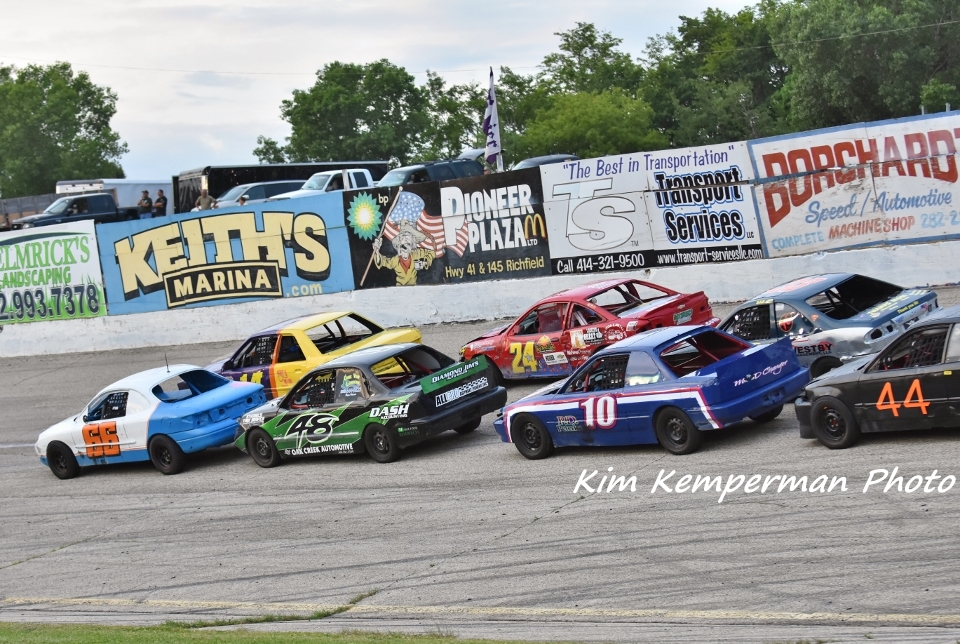 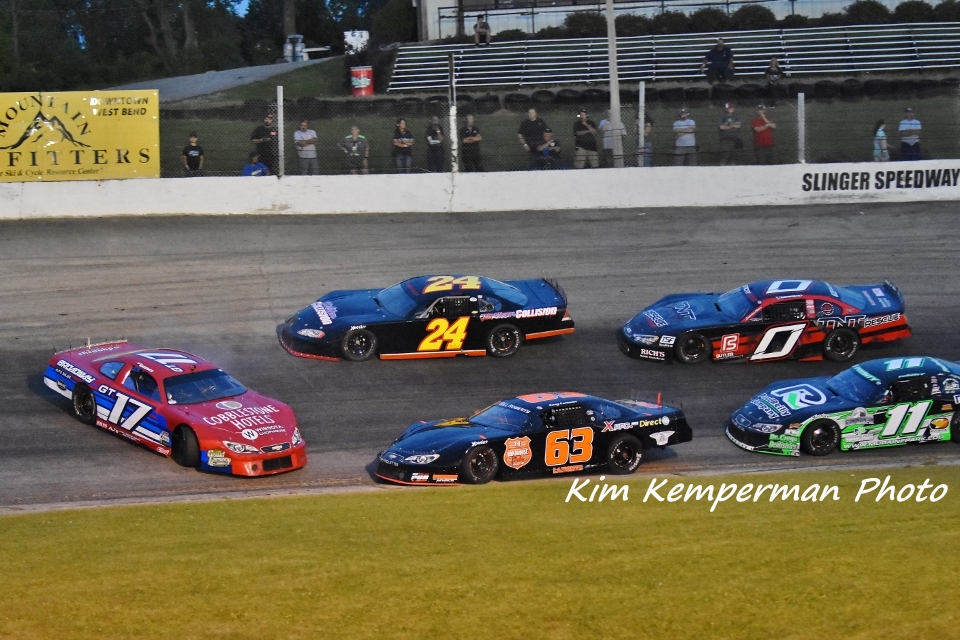 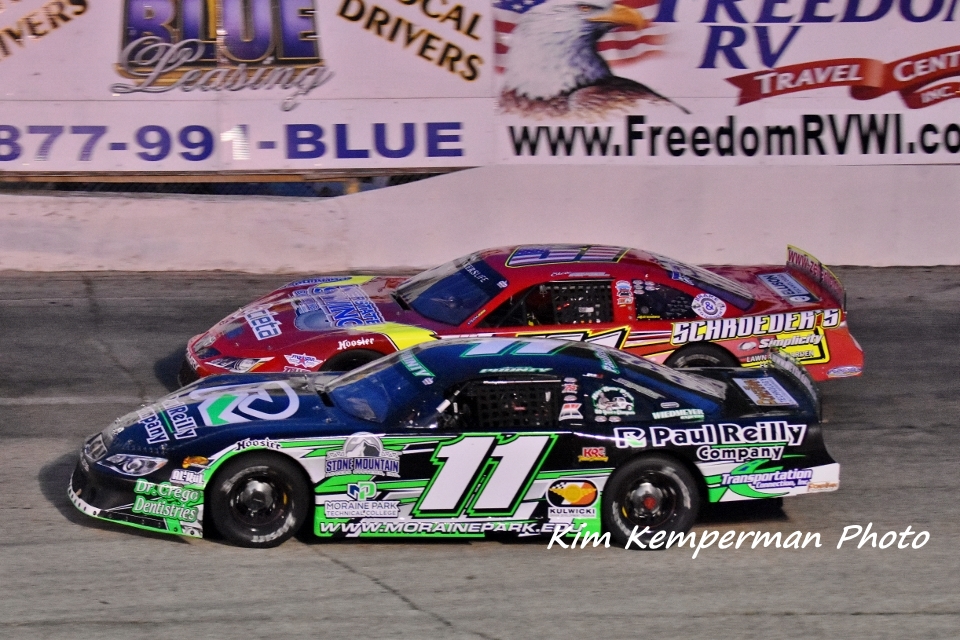 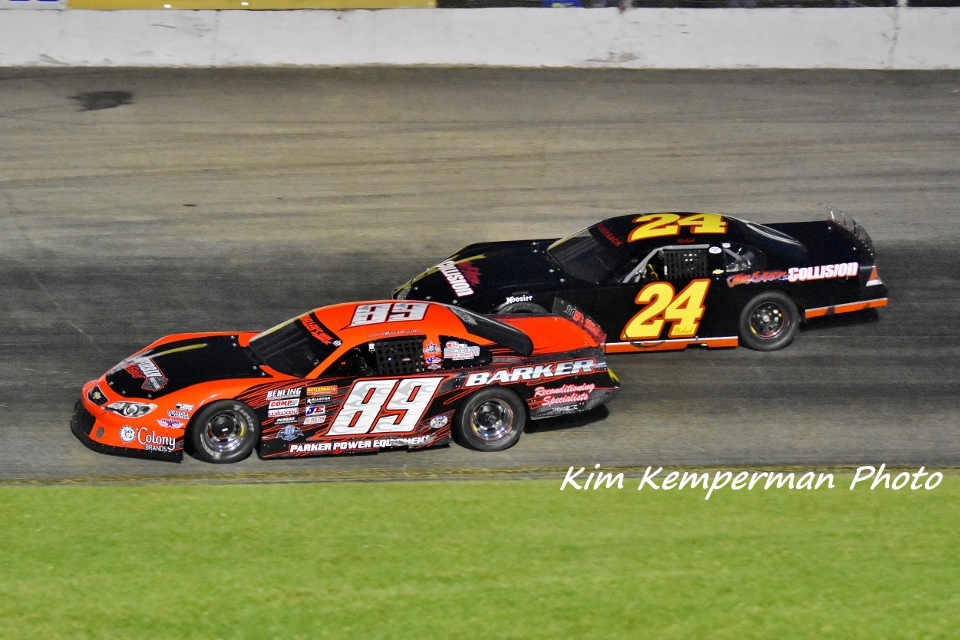 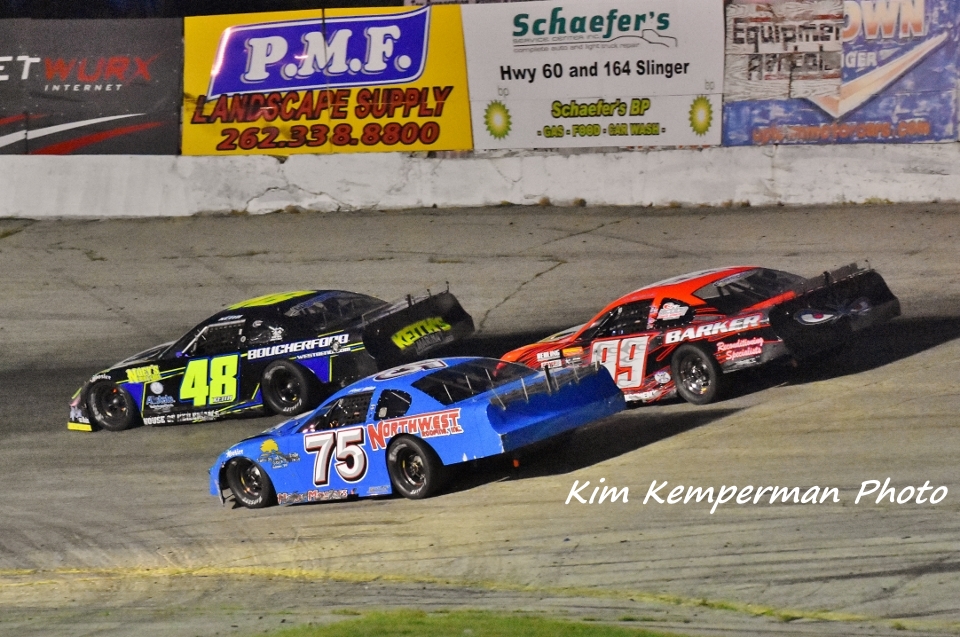 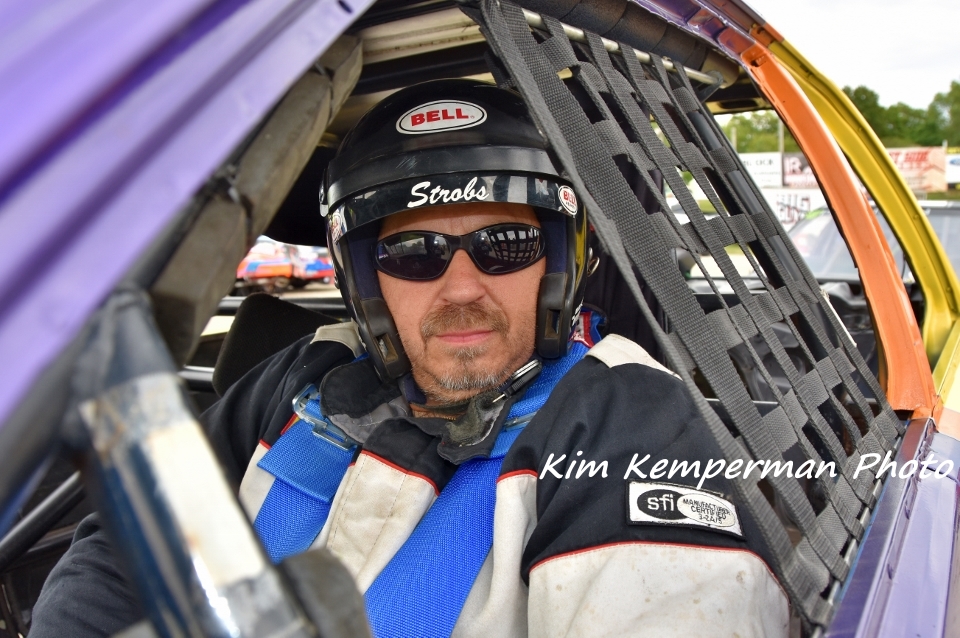 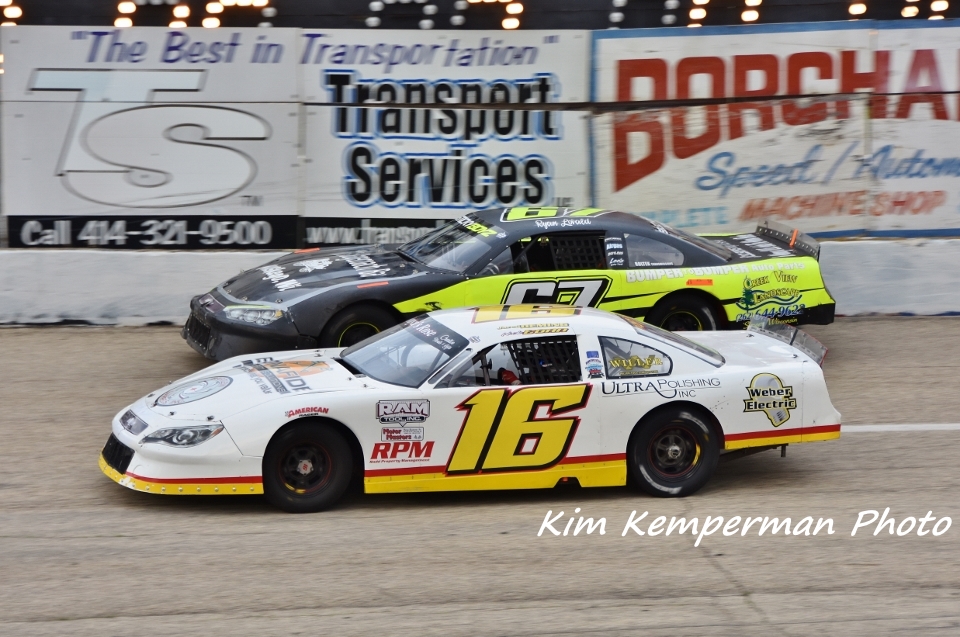 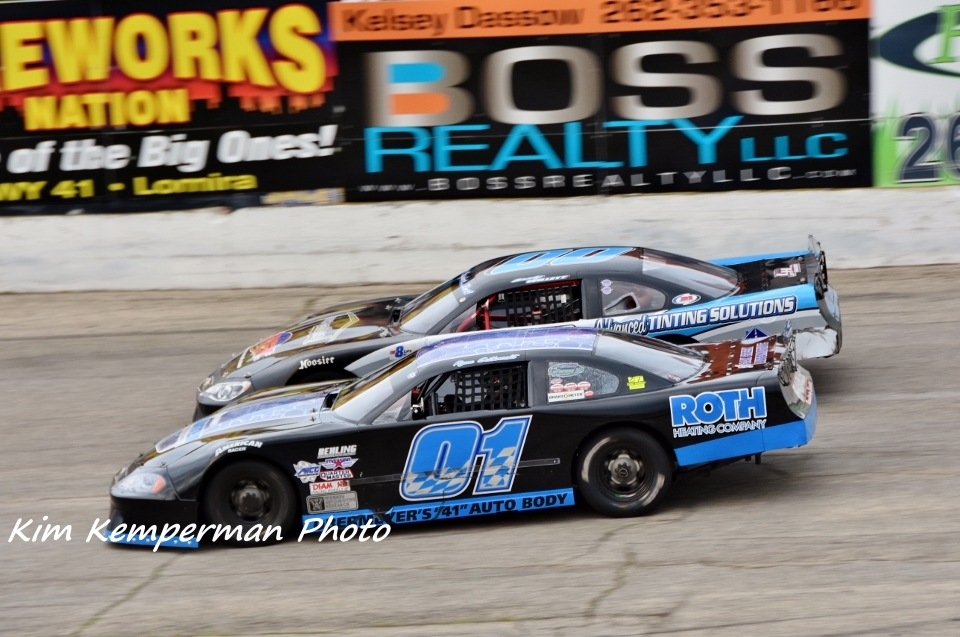 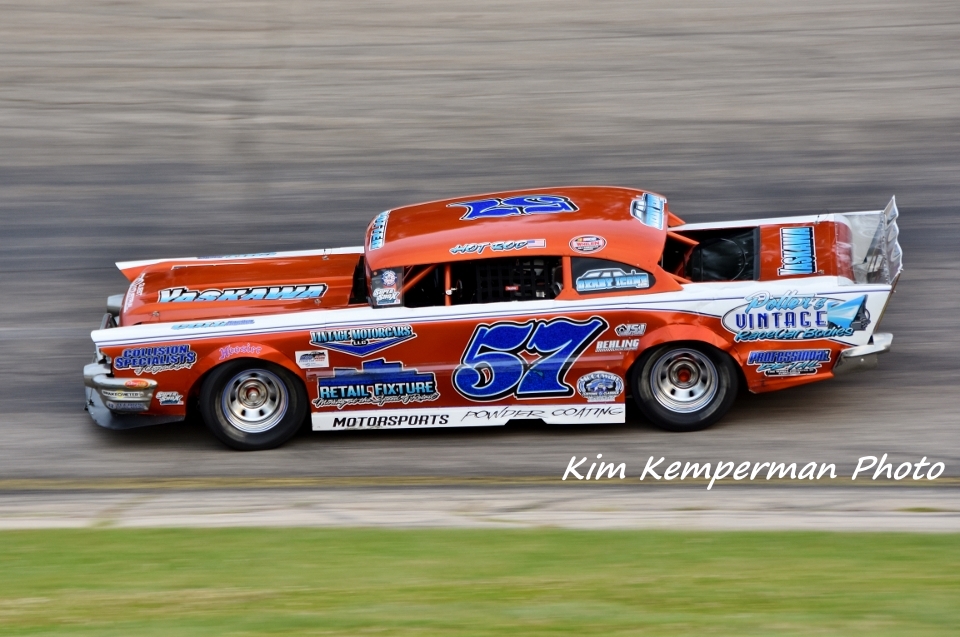