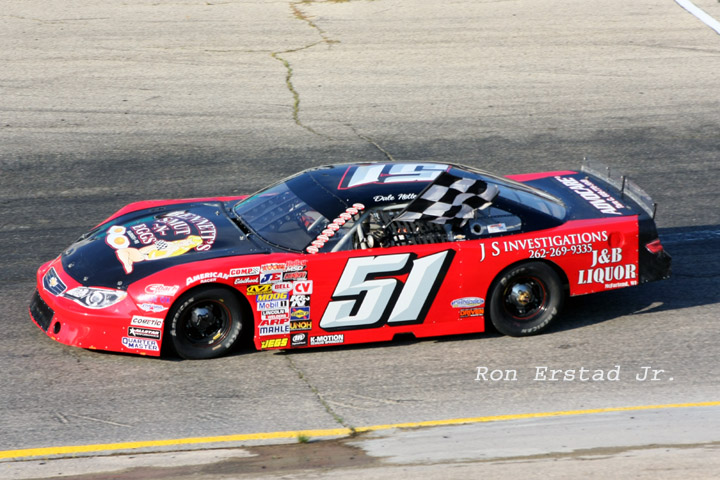 By Dan Margetta
Slinger, Wis., July 16— Dale Nottestad passed Kyle Chwala for the lead while working lapped traffic with just under ten laps to go and went on to capture the victory in Round One of the Badgerland Challenge 50-lap late model feature Sunday night at the Slinger Super Speedway.

“This is a pretty awesome deal and (car owner) Sonny Clifcorn is here and he’s not doing too good,” an emotional Nottestad stated from the victory deck as he dedicated the victory to his ailing car owner, “This really means a lot and I appreciate everything he’s done for me. This is the best car I’ve ever had here.”
“We fell off a little bit there at the end, “Chwala told the crowd following his runner-up finish, “But we’ve been working on it and have really seemed to hit our stride these last couple weeks. To finish second to Dale Nottestad…I’m okay with that and we’ll be back.”

Jack Stern and Stephen Scheel paced the field to the green flag and Scheel edged out to the early lead as the caution flag waved early at the completion of lap one when E.J. Waldron’s car looped around exiting turn four. The race resumed for just three more laps before slowing under caution again when Andy Evreat’s car turned around off the second turn with Scheel leading over Stern and Kyle Chwala. While Scheel led as the green flag was displayed, Chwala made up the most ground as he used the inside lane to snap second from Stern then a lap later took to the outside lane to complete the pass on Scheel for the lead on lap eight. One lap after Chwala took the lead, the field was back under the yellow flag as Kyle Taylor and Ryan Lovald tangled in turn three in an incident that also collected Andy Evraets. Once again Chwala maintained the lead on the restart as behind him, Dale Nottestad and Zack Riddle began to make their charge toward the front of the field. By lap 25, Nottestad and Riddle were in the top five and looking to close on Chwala, Scheel, and Stern ahead of them when Zach Braun’s car smacked the turn two wall to draw another caution. Chwala and Scheel remained out front while Nottestad worked his way around Stern and into third place by the time the fifth caution flag waved on lap 29 for an incident between Ryan Gutknecht and Shaun Scheel in turn two. Again Chwala remained out front as racing resumed but Nottestad continued to advance forward as he dispatched Stephen Scheel for second while behind him Stern, Zack Riddle, and Jakob Hassler battled over the final positions in the top five. Nottestad closed the gap between himself and Chwala when the leader approached lapped traffic and began to challenge for the lead. As the leaders manipulated their way through the traffic, Nottestad was able to use the outside lane to pull alongside Chwala and effectively pick him behind the slower traffic to take the lead.. Nottestad then held off all challenges from Chwala to score the victory, leaving Chwala to settle for second place just ahead of Stephen Scheel in third. Zack Riddle was able to muscle his way around Stern in the closing laps to finish a strong fourth while Stern was fifth. Nick Roehl took the checkered flag in sixth place followed by Jakob Hassler in seventh and R.J. Braun in eighth. Jon Ovadal and Braison Bennett rounded out the top ten finishers.

Paul Wagner used the outside groove to take the lead of the Area Sportsman 35-lap main event following a late restart and drove to the victory.

Andy Welter and Jason Thoma raced the first 20-lap side by side and traded the lead every few laps while Paul Wagner raced in their tire tracks in third. The race slowed under caution on lap 21 when Dean Bleecker’s car looped around in turn two and Wagner took advantage of the lane choice cone on the restart, electing to take the outside lane. Welter led for a lap as racing resumed, but then spun around off turn two and into the infield allowing Wagner to take the top spot with Jay Kalbus and Thoma close behind. Wagner could not be caught in the final laps and he scored the victory over Kalbus and Jason Stark who capped off a strong race with a third place finish. Jason Thoma finished fourth and Jake Schraufnagel was fifth. Michal Gilomen won the first Area Sportsman heat race and Paul Wagner edged Terry Wangsness to win the second heat race. Jay Kalbus was the fastest qualifier.

Brandon DeLacy edged Tom Berens to win the 25-lap Super Beez feature while George Sparkman was third. Steve Zoromski and Nick Schmidt completed the top five as all top finishers raced extremely close for the entire event. Dale Kiley-Schaefer and Scott Hoeft were the winners of the Super Beez heat races and Brandon DeLacy was the fastest qualifier at 13.668 seconds.

Willy Van Camp won an exciting Figure 8 race to close the evening as he slid across the finish line with Rick Bruskewicz as they battled for the victory. 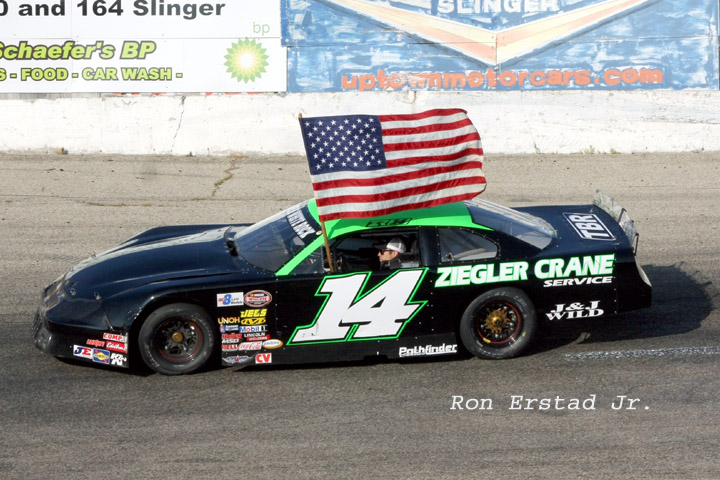 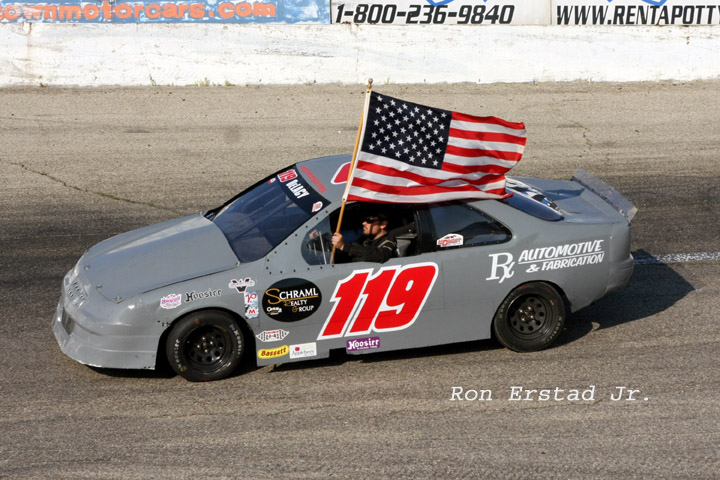 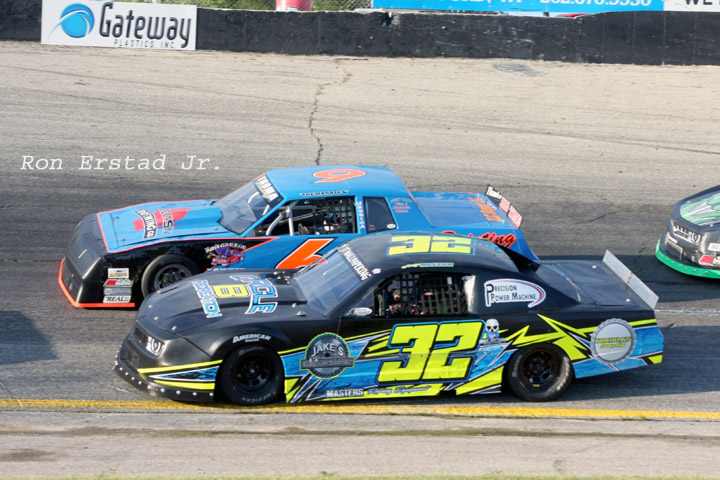 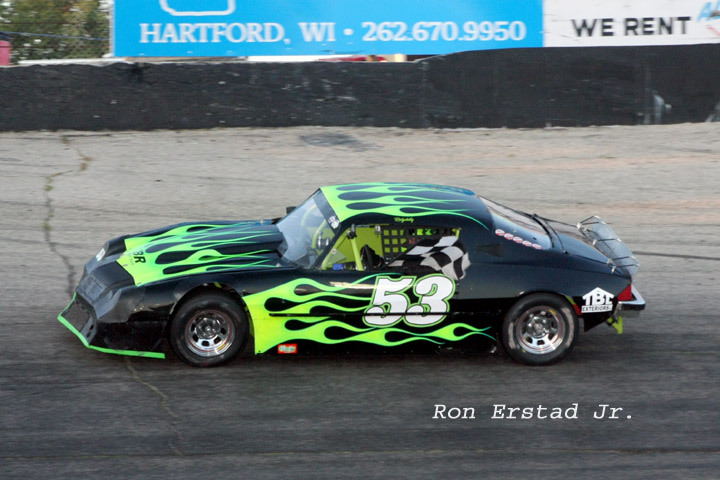