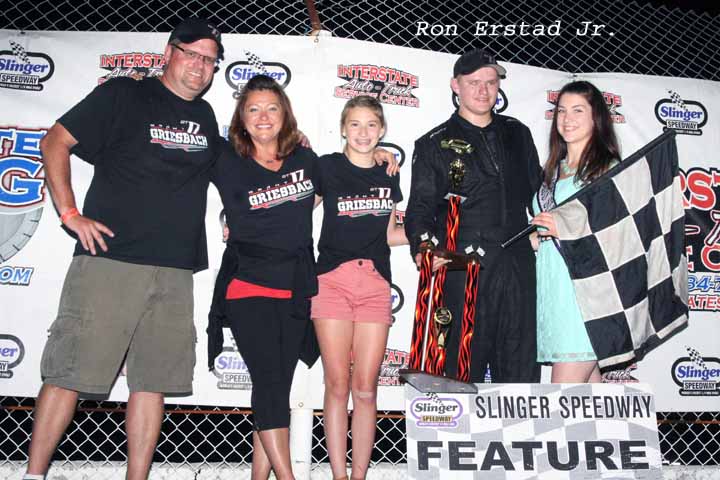 By Dan Margetta
Slinger, Wis., Aug 20—A few weeks ago, 15-year old Grant Griesbach finished fourth and proved he could run with the big dogs at the Slinger Super Speedway and Sunday night he proved he could beat them as he stormed to the lead on a late race restart and captured his first career super late model feature victory.

“I really don’t know what to feel but it’s just the best feeling in the world,” the soft spoken Griesbach said in victory lane after becoming what many believe to be the youngest super late model feature winner in speedway history, “I’ve never won here in a super late model and it’s been lots of years since I won a feature dating back to my Slinger Bee days.”

“I’m just thankful for all the people around me and everyone in the stands wearing a #17 shirt,” Griesbach continued, “I would not be here without them. It doesn’t matter when it comes because when it’s here it is so great.”

“I didn’t know what to think and I just went as fast as the car would go,” Griesbach continued after winning as his parents celebrated their 17th wedding anniversary which matched his car number, “There’s not much to it.”

Gary LaMonte and Conrad Morgan led the field to the green flag with LaMonte edging ahead to lead lap one before Morgan jumped into the lead from the outside lane. Behind the leaders, Dennis Prunty, Steve Apel, Grant Griesbach, and Alex Prunty all jockeyed for position along with Brad Keith and Chris Blawat. As things settled down up front, Morgan held the lead with LaMonte on his tail just ahead of Dennis Prunty, Apel, Griesbach, and Alex Prunty. Morgan maintained the lead following a quick caution for a single car spin and the top three remained steady as Griesbach went to work on Dennis Prunty over fourth. Griesbach took the spot after his slight bobble in turn three knocked Prunty’s car up a few lanes while up front LaMonte began an inside challenge on Morgan for the lead. LaMonte and Morgan ran side by side for a few laps before Morgan prevailed following contact between the two down the back straightaway which allowed Steve Apel to slip by LaMonte and into second.

The second caution flag waved just before the halfway mark when Brad Kossow’s car looped around in turn two with Morgan leading over Apel and LaMonte. Morgan chose the inside for the restart and as racing resumed, Apel rocketed by from the outside to take the lead. Alex Prunty settled into third leaving LaMonte to battle with Dennis Prunty and Griesbach over fourth. The caution flag flew again on lap 44 when Ryan Destefano’s car went for a smoky spin in turn four while racing with Mike Egan. Once again Apel took to the outside for the restart and when racing resumed, Morgan’s car slid sideways in turn two about the same time Apel’s car slowed slightly off the turn which bottle-necked the field. When everything settled out Morgan and LaMonte lost the most position as Alex and Dennis Prunty as well as Griesbach all went by. A lap later, Morgan’s car appeared to have similar issues entering turn one and as he slowed slightly in front of LaMonte and Chris Blawat, LaMonte’s car rode up on top of Blawat’s machine and both spun into turn one before LaMonte’s car backed hard into the concrete.

Again Apel chose the high lane for the restart leaving the low groove for Alex Prunty who now was in second. As the green flag flew, Apel took off from the high side, leaving Prunty to battle side by side with Griesbach for second, a position Griesbach took after a few laps. The caution quickly flew again when Fred Winn’s car slowed with damage on the frontstretch and predictably Apel took the high lane on the restart as Griesbach now moved to the inside from second. Griesbach hung tough on the inside and while Apel maintained the lead, he couldn’t clear Griesbach who remained at his door while both Alex and Dennis Prunty joined the lead battle. A final caution waved with just five laps to go as contact between Brad Kossow and Lowell Bennett stacked the field and resulted in damage to Ryan DeStefano’s car.

Apel again chose the outside lane for the restart but this time Griesbach was ready and he kept even with the leader as the green flag waved. By the time they exited turn two, Griesbach was able to clear Apel and take sole possession of the lead. Griesbach stretched his lead slightly as both Dennis Prunty and Alex Prunty muscled their way around Apel with the laps winding down. Griesbach drove to his first career super late model feature victory while Dennis Prunty held off Alex Prunty for second. Brad Mueller was fourth and Apel finished fifth.

With his third place finish, Alex Prunty closed the championship points battle even closer as Steve Apel now leads the standings by just 18 points over Prunty with LaMonte in third, 35 markers behind with just two points nights remaining. The race also marked the third and final round of the Triple Challenge and with his second place finish, Dennis Prunty was the overall winner between the three rounds.

Wagner took the lead on lap five and never looked back during the caution-free event. Andy Welter advanced from deep in the field to finish second ahead of Jake Schraufnagel in third. Adam Bleskan finished fourth and Joe Shelby was fifth. Jay Kalbus ran with the leaders until experiencing mechanical problems in turn three with a lap to go and finished sixth.

Tom Berens was back in victory lane following the 18-lap Super Beez feature.

Robert Peters led the opening lap before Brandon Tackes drove to the front while Tom Berens and Steve Zoromski worked their way forward. By lap five, Berens found himself in the lead as he passed Tackes while Zoromski lost a bit of ground when his car kicked loose in turn two. Zoromski recovered to take over second a few laps later while Berens began to pull away. Berens was never challenged in the final laps and he drove to the victory. Zoromski finished second followed by Brandon Tackes and Jayden Buckley. Al Strobel was fifth.

Tom Berens won the Super Beez heat race and also was the fastest qualifier with a lap of 13.852 seconds. 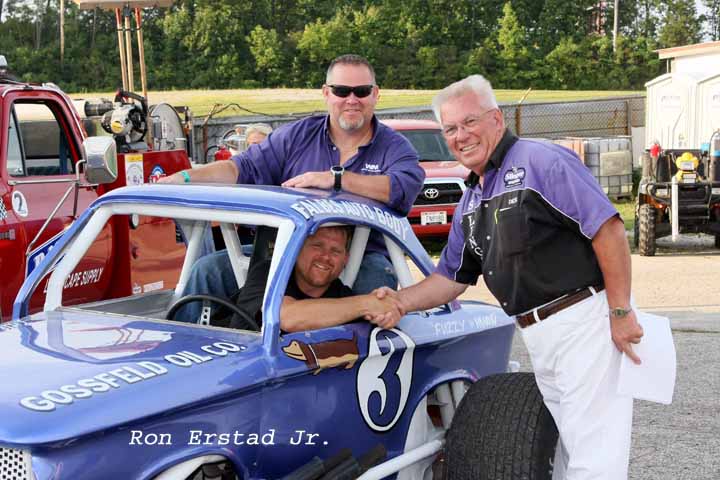 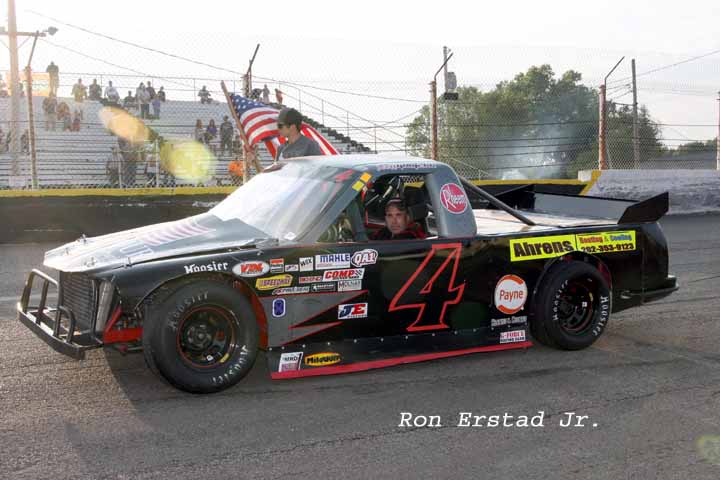 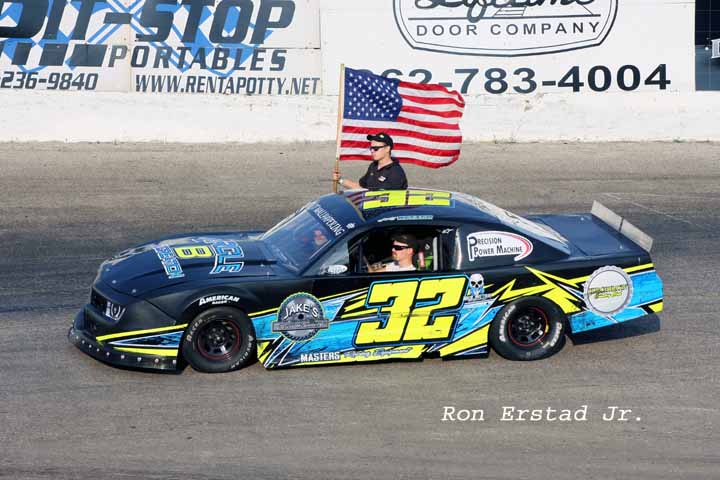 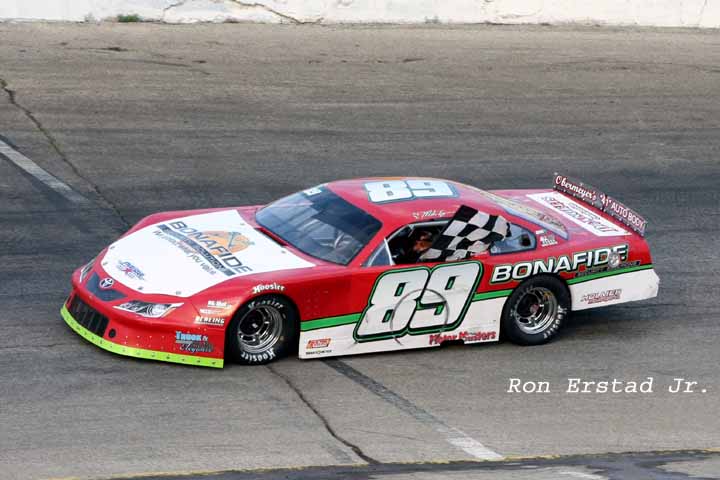 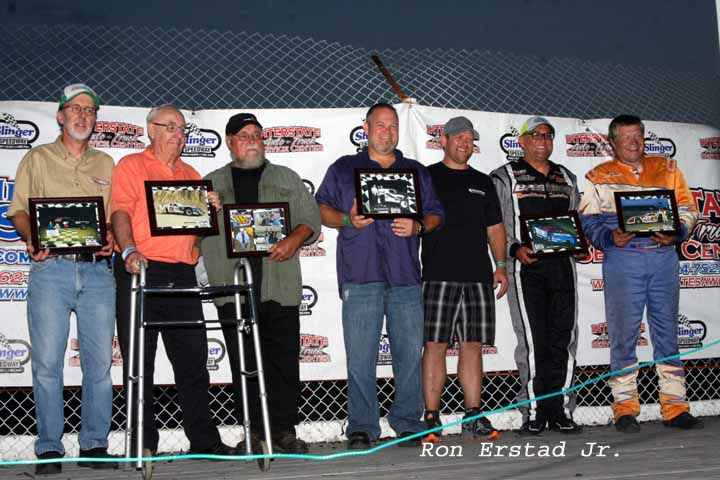 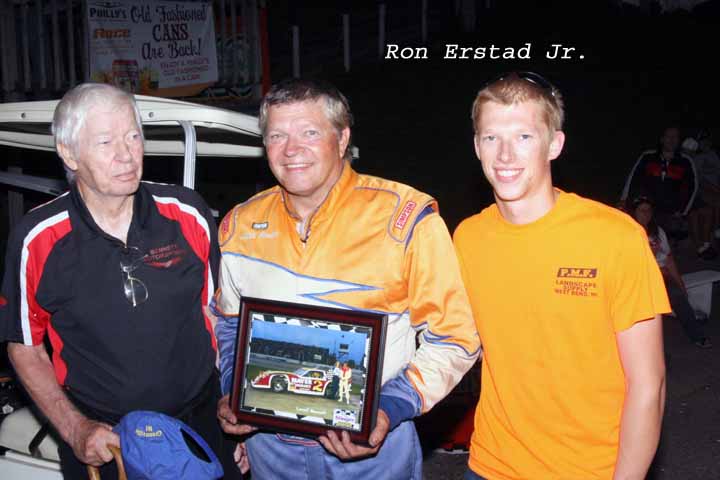 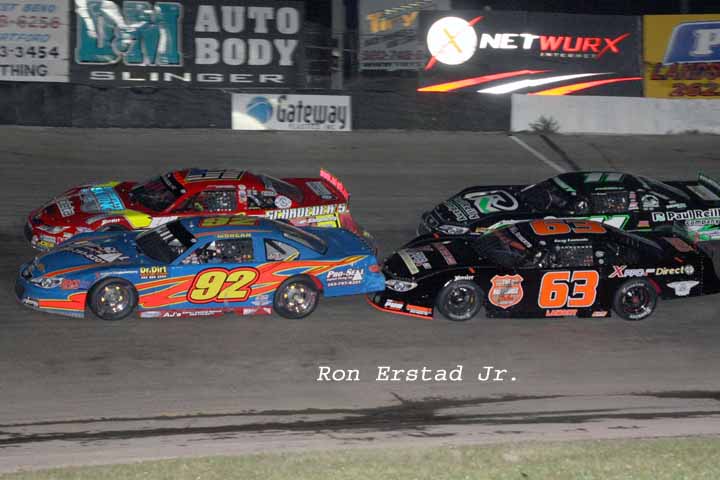 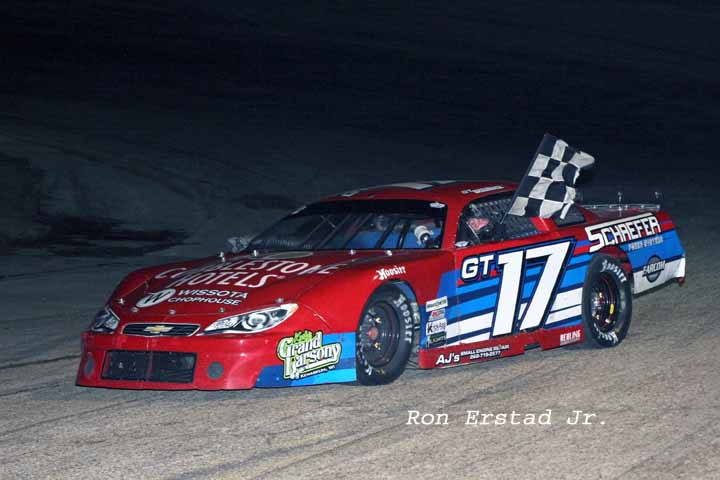 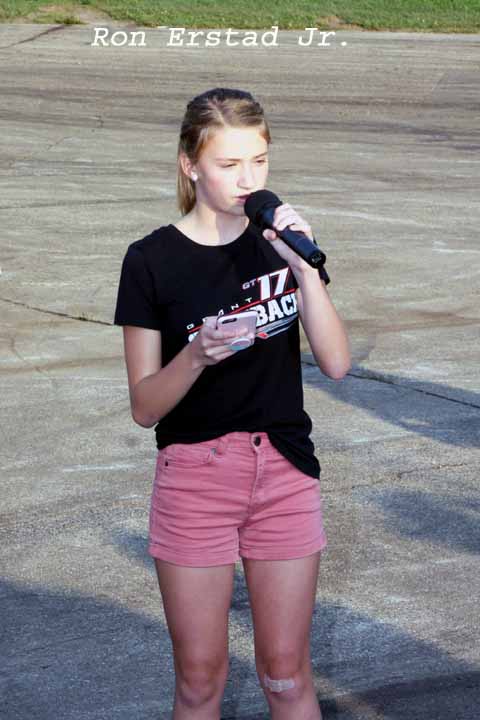 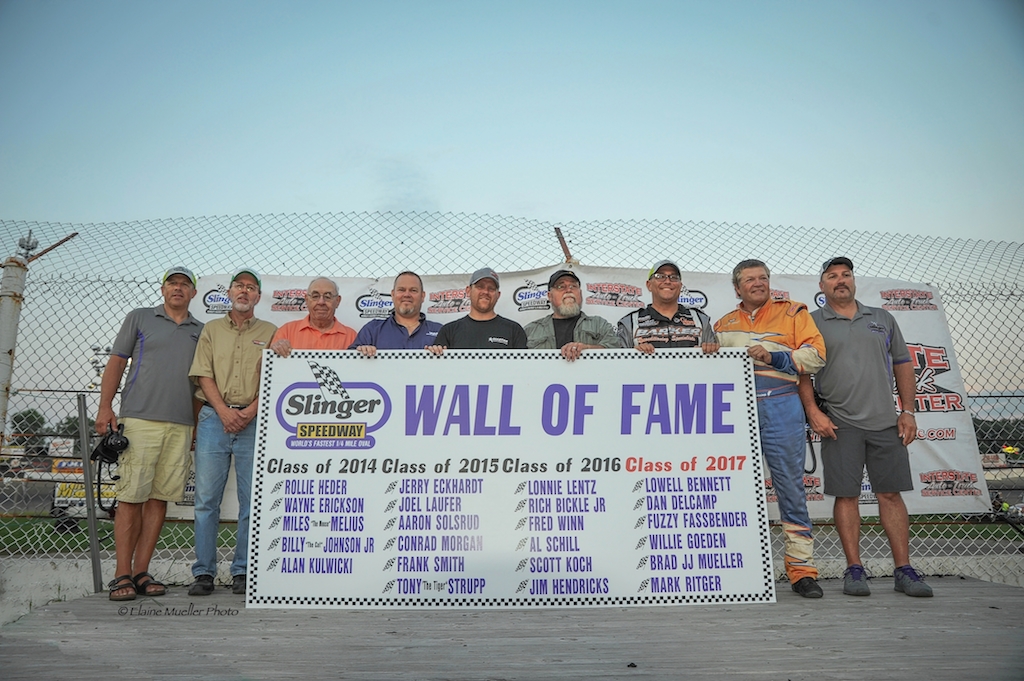