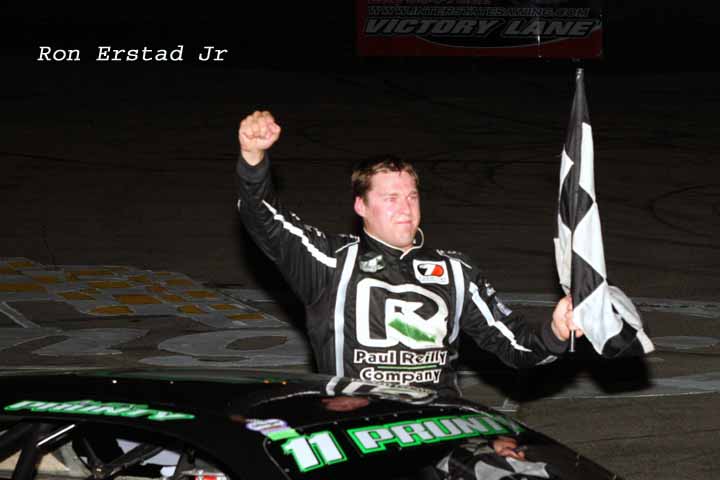 “It might’ve been luck to be able to hold him (LaMonte) off from the outside,” Prunty stated from victory lane following the close finish, “I don’t know what happened going into (turn) three there but I guess it was just getting excited and it almost cost me one,”

“If I want to win the championship we’ve got to win races, “Prunty continued, “We have to keep it up and the car has been running pretty well. Tonight was closer than I like but it was fun.”

“It was fun and they were telling me on the radio we were beating Alex (Prunty) by half a tenth a lap and we kept going hard and we ran him down,” LaMonte said after his second place result, “I got to the inside of him and on the last lap he bobbled and made a mistake and we just lost by .026 (seconds).”

“It was fun to watch and I thought we might have had a chance there at the end, “ stated Apel who remained the point leader with his third place result, “Hopefully next time I can be leading but all in all it was not a bad day and we will come back next week,”

Alex Prunty jumped out to the early lead from the pole position and scooted out front while fellow front row starter Brad Keith and Steve Apel battled side by side for second with Gary LaMonte and Grant Griesbach right behind them. LaMonte eventually threaded his way through to second with Apel following while Griesbach slotted into fourth just ahead of Keith. Dennis Prunty muscled his way around Keith for fifth and he brought Chris Blawat along with him as Keith got caught on the outside and lost two positions. A few laps later, Blawat went to work on Prunty and as they battled side by side entering turn one, Blawat’s car had a power steering failure which kicked it sideways and as he fought to control the car, it slide into Prunty’s machine on the outside, sending both cars hard into the turn two wall to draw the caution flag on lap 29.

Alex Prunty maintained the lead as racing resumed while LaMonte and Apel fought door to door for second in a battle that lasted several laps before LaMonte was able to pull away from the outside. Over the final circuits, LaMonte and Apel began to reel in Prunty for the lead and with ten laps to go, LaMonte was on Prunty’s bumper with Apel right in their tire tracks. LaMonte was able to look to the inside of Prunty and the two ran alongside each other in a fierce battle for the win. Lapped traffic as the two took the white flag gave a slight edge to Prunty as the leaders were forced to go back single file but when Prunty bobbled slightly off turn four, LaMonte got a strong run down the frontstretch to make a charge for the victory. LaMonte’s charge came up just inches short at the line and Alex Prunty scored his second feature win of the season. Steve Apel finished a close third while Grant Griesbach and Brad Keith rounded out the top five. Ryan DeStefano finished sixth ahead of Conrad Morgan and Nick Wagner in seventh and eighth respectively while Fred Winn and Al Stippich rounded out the top ten.

Super late model heat races were won by Al Stippich and Alex Prunty and Conrad Morgan was the fastest qualifier with a lap of 11.345 seconds.

Ryan Gutknecht took the lead from Shaun Scheel with eight laps to and went on to win the 40-lap late model feature. Scheel battled Gutknecht intensely for the lead but was forced to settle for second at the finish while Jeff Holtz finished third. Early leader Jakob Hassler finished fourth and Kyle Chwala rebounded from an earlier incident to finish fifth.

Late Model heat races victories were recorded by Kyle Chwala and Brian Holtz while Ryan Gutknecht was the fastest qualifier after turning in a lap at 12.289 seconds.

Mark Pluer made his first Slinger appearance of the 2017 season and he picked up a Midwest Sportsman heat race win while Jimmy Evans scored the victory in the second heat race. Ryan Gutknecht was also the fastest qualifier for the Midwest Sportsman division with a lap at 12.798 seconds.

Steve Zoromski held off Tom Berens by just .064 seconds to win the 25-lap Super Beez feature as the two crossed the start-finish line three wide with a lapped car between. All three cars spun after the checkered flag as Zoromski barely edged Berens for the victory. Nick Schmidt finished third while Brandon Tackes took the checkered flag in fourth and Jayden Buckley was fifth.

Matt Urban raced side by side for the lead with Brandon Tackes for the entire 25-lap Slinger Bee feature before edging Tackes for the victory. Anthony Dorzok finished third followed by Al Strobel and Zach Greer.

Zach Greer and Al Strobel won the Slinger Bee heat races and Tom Elsinger Jr. was the fastest qualifier with a lap of 15.243 seconds. 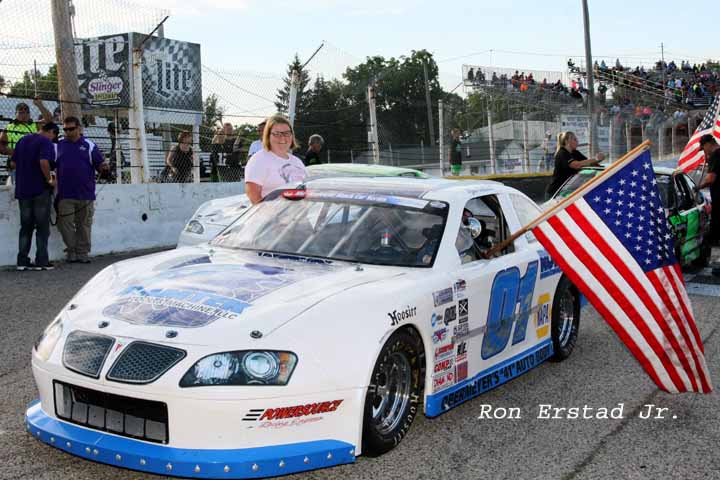 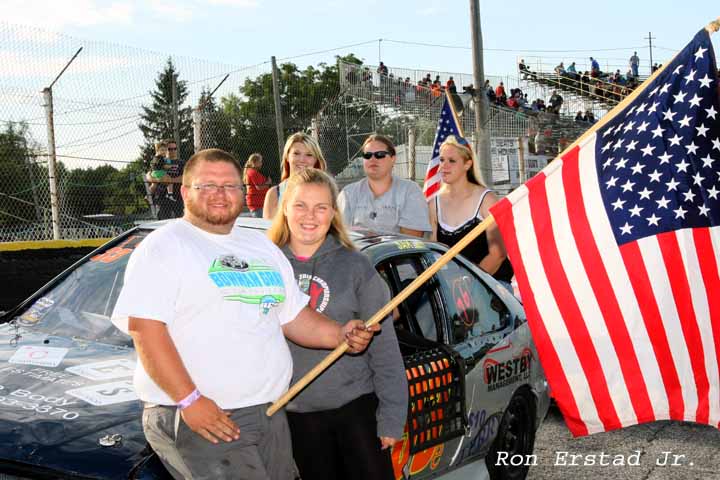 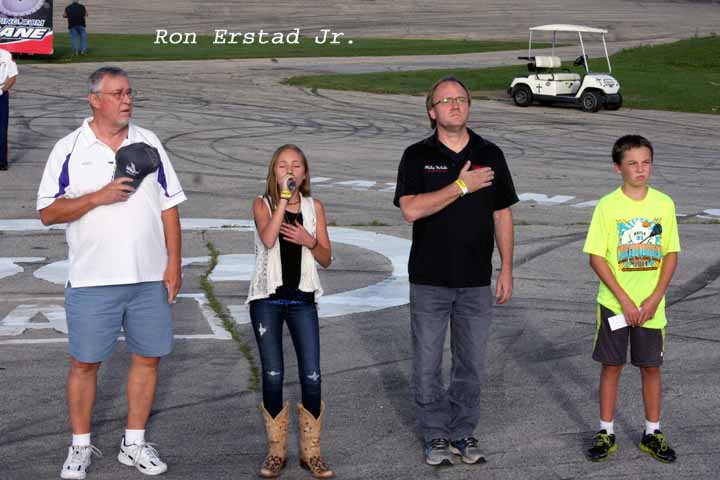 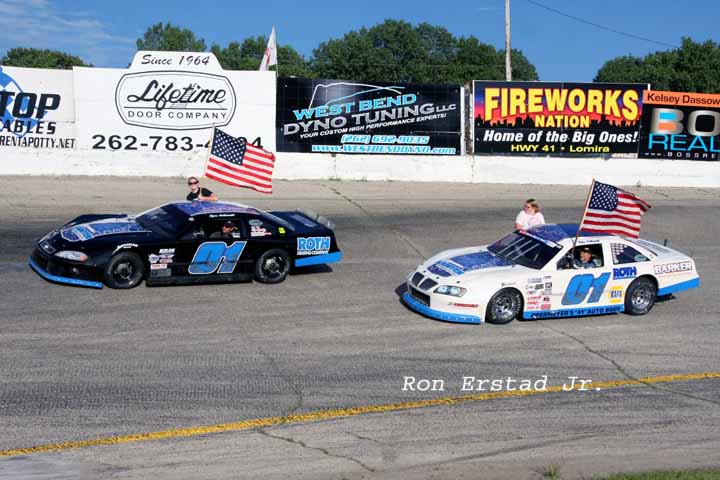 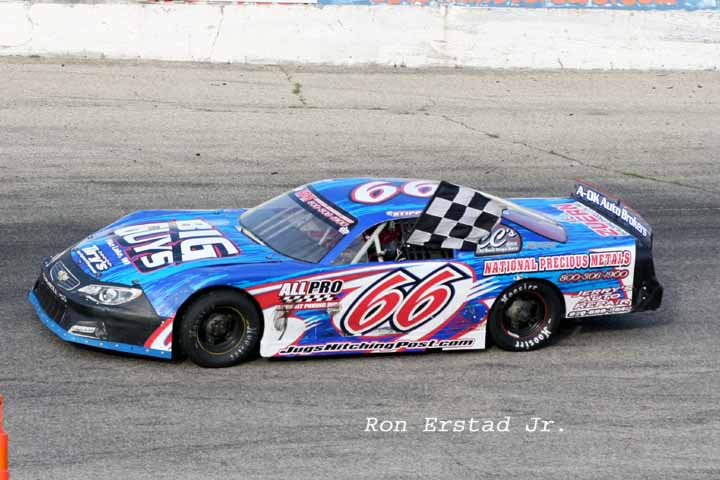 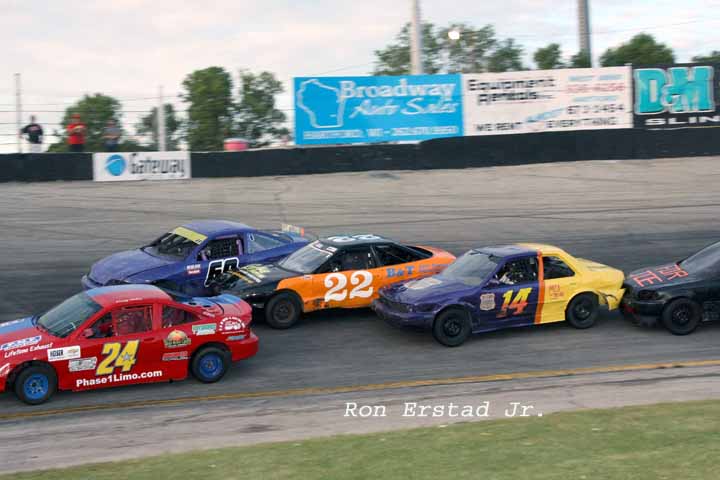 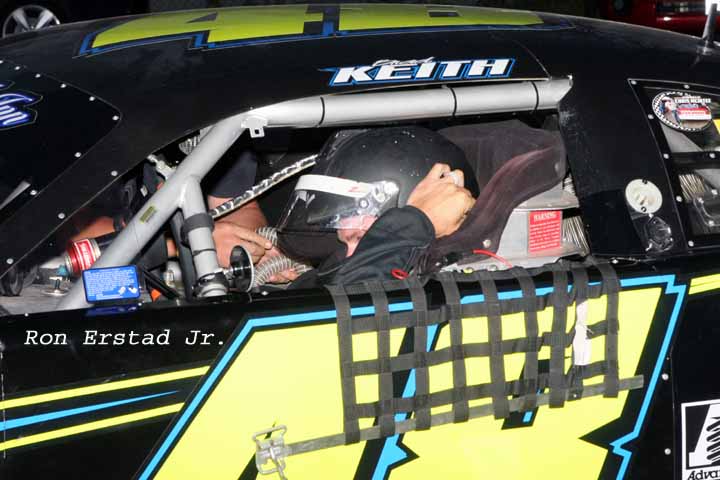 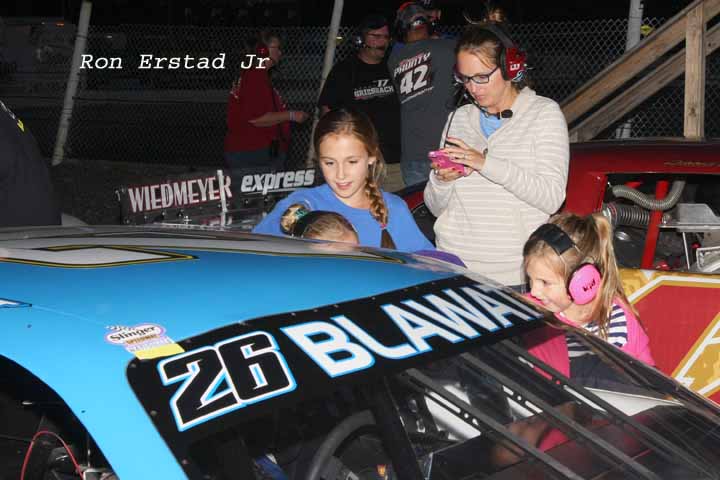 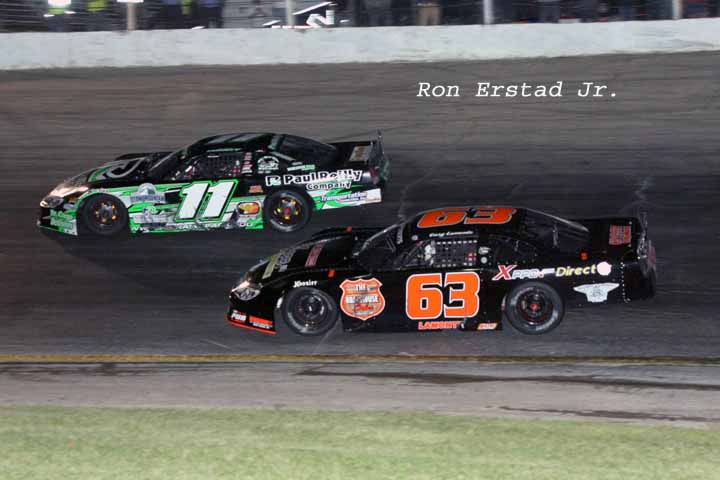