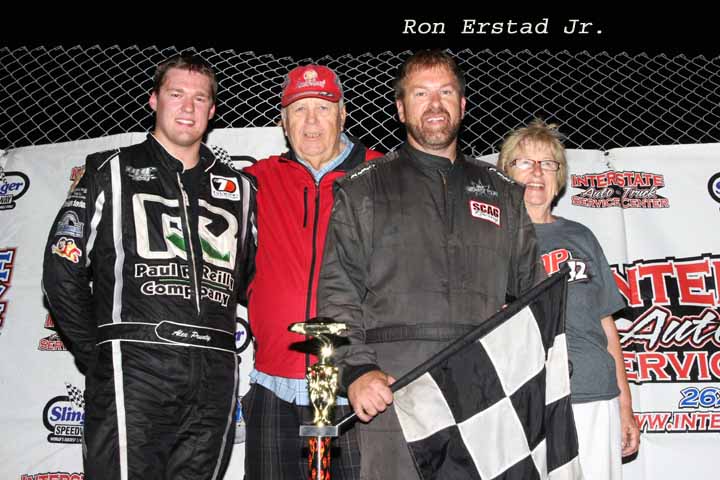 Ryan DeStefano and Chris Blawat brought the field to the green flag and they ran side by side and swapped the lead in the opening laps with Grant Griesbach and Dennis Prunty directly behind them. The race quickly fell under the caution flag on lap three when Nick Wagner’s machine looped around in turn four with Blawat leading over DeStefano, Griesbach, and Prunty. Steve Apel, Gary LaMonte, and Alex Prunty followed as the field formed for a restart.

As racing resumed, Blawat maintained the lead while Griesbach used the inside groove to take second, bringing Steve Apel and Dennis Prunty along with him. Alex Prunty and Gary LaMonte also worked their way by DeStefano who was caught in the outer groove of the speedway. Once into second, Griesbach tracked down Blawat for the lead and began to apply the pressure while behind the lead duo, Dennis Prunty challenged Apel for third. Griesbach was able to nudge to the inside of Blawat off turn four and he completed the pass for the lead in turn one on lap 13 as Prunty took control of third place from Apel. Griesbach began to pull away slightly out front as Prunty went to work on Blawat, taking the position while further back, Alex Prunty muscled his way around Apel to move into fourth. Before Apel could recover from his battle with Alex Prunty, Gary LaMonte slipped by to take fifth place just before the second caution flag waved on lap 20 when Fred Winn spun in turn four while racing for position with Jerry Eckhardt.

Griesbach kept the lead on the restart and he fought hard with Dennis Prunty to keep the lead for a few laps before Prunty motored by off the second turn to take the lead on lap 22. Alex Prunty advanced into third following some door rubbing with Blawat and Gary LaMonte also worked his way around Blawat and into fourth. As Dennis Prunty continued to lead, Alex Prunty applied the pressure to Griesbach for second and he took over the position after a slight tap to Griesbach’s rear bumper but the pass was negated when the caution waved for Nick Wagner’s stopped car in turn two on lap 26.

Dennis Prunty chose the outside lane for the restart and he once again established himself as the leader while Alex Prunty reapplied his pressure on Griesbach for second. Alex Prunty was able to work his way around Griesbach to take over second as Gary LaMonte advanced his way around Apel and into fourth. LaMonte was on the move and within a few laps he caught and passed Griesbach for third while Dennis Prunty continued to lead over Alex Prunty. In the closing laps, Dennis Prunty maintained a sizeable lead and although Alex Prunty closed slightly, he was unable to make any serious challenge for the lead as Dennis Prunty drove to the victory. Alex Prunty finished second and Gary LaMonte was third. Grant Griesbach turned in his strongest race to date with an impressive fourth place finish and Steve Apel was fifth. Chris Blawat finished sixth followed by Conrad Morgan in seventh and Mike Egan in eighth. Mark Eswein and Rob Braun rounded out the top ten.
Mike Egan and Dennis Prunty each won super late model heat races and Gary LaMonte was the fastest qualifier at 11.285 seconds.

Chwala took the lead at the start of the event and turned back numerous challenges from Gutknecht to score the victory. Tyler Schley ran a strong race and finished third while Luke Westenberg and Brian Holtz were fourth and fifth respectively. Kyle Chwala also won a late model heat race while Shaun Scheel picked up the win in the other late model heat race event. Ryan Gutknecht was the fastest qualifier with a lap at 12.232 seconds.

Tom Berens won the 25-lap Super Beez feature over Steve Zoromski and Brandon Tackes. Dale Kiley-Schaefer finished fourth. The race was red flagged earlier for a hard crash involving Jayden Buckley who lost a wheel and hit the turn two Styrofoam barrier. Buckely emerged from her battered car under her own power. Tom Berens also won the Super Beez heat race and was the fastest qualifier at 13.855 seconds.

Joe Mueller won the Figure 8 race to close out the evening. 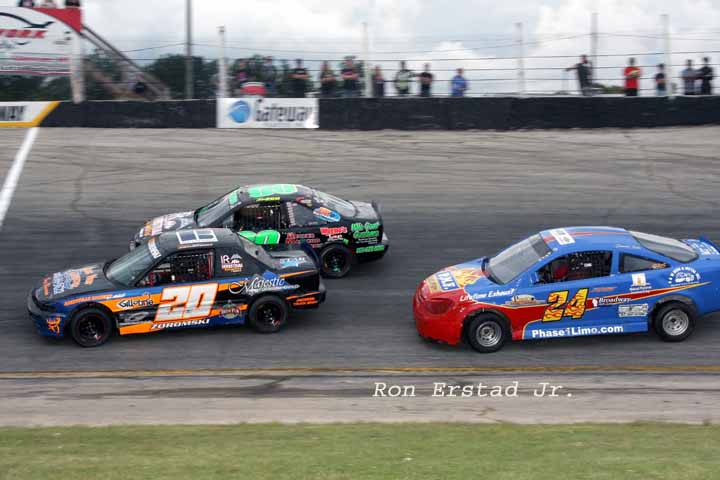 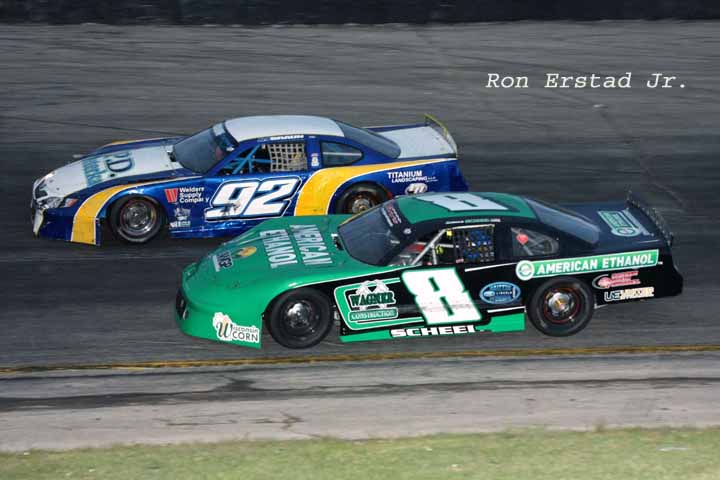 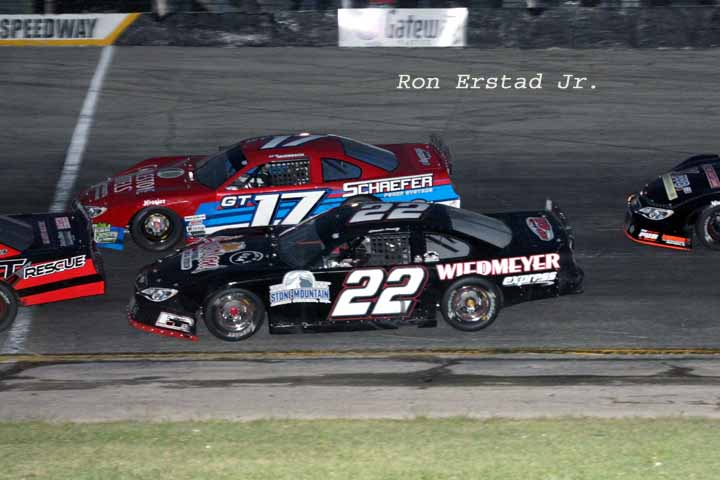 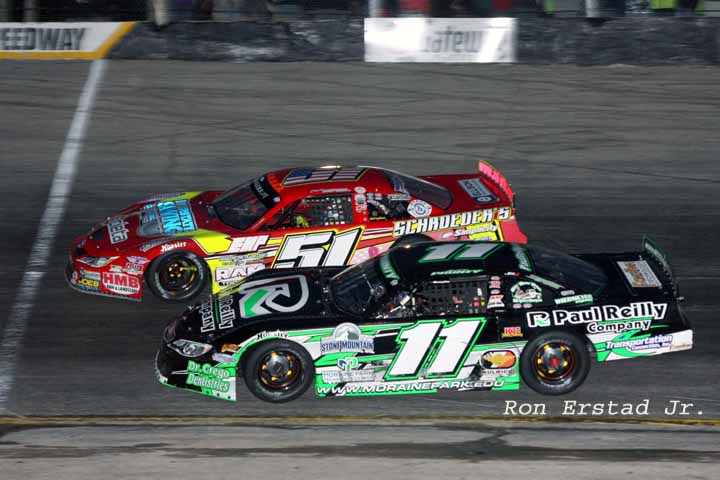 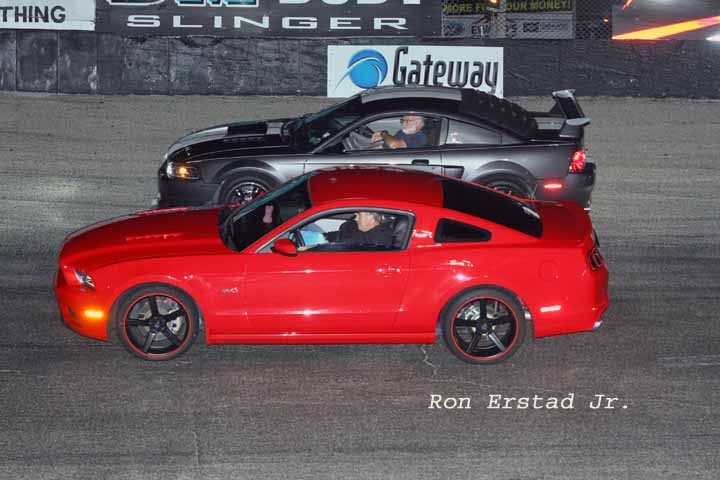 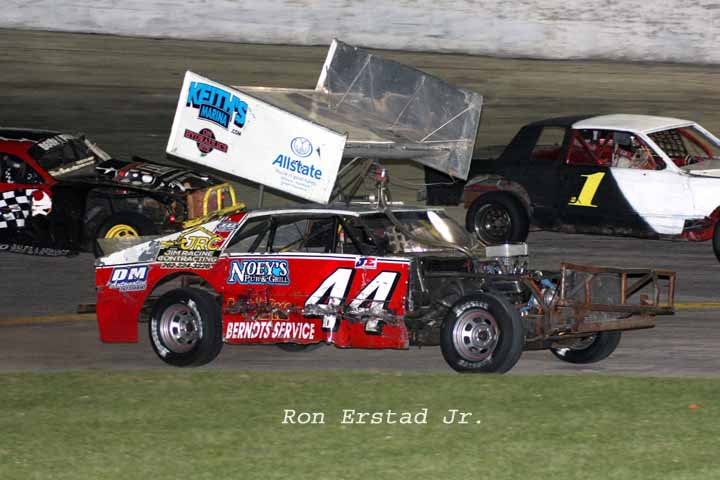 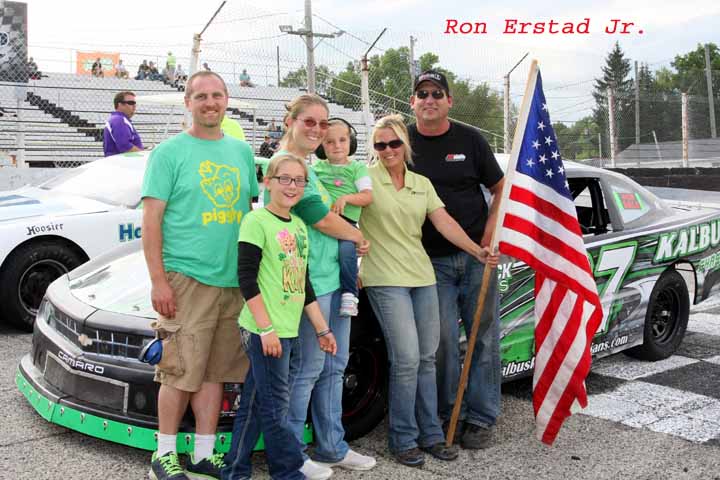 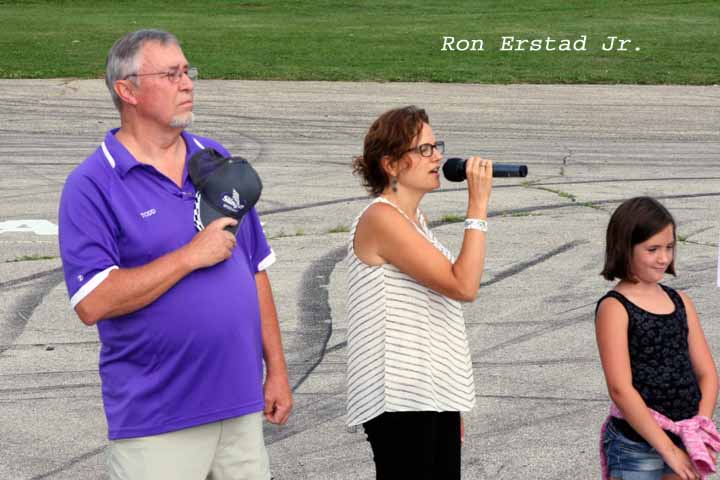