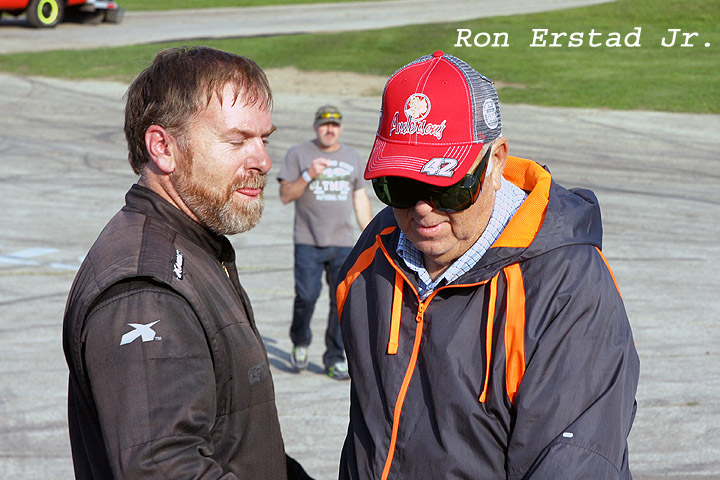 By Dan Margetta
Slinger, Wis., Sept. 10— With the super late model season having concluded at the Slinger Super Speedway, Dennis Prunty climbed aboard his late model and proceeded to win the 50-lap main event Sunday afternoon as track champions were crowned in all divisions.

“You would think for $8,500 someone would come out and buy this thing because we just won the feature with it, “ Prunty stated from victory lane after racing the car Sunday with the main purpose of selling it, “We got up this morning early and switched the car over and got it ready. It’s $8,500 the way it is, come get it.”

Shaun Scheel and Eddie May paced the field to the green flag and Scheel grabbed the early lead, pacing the first six laps before May took command on lap seven with Brian Holtz and Dennis Prunty battling for third. The first caution flag waved on lap nine when Prunty’s car spun off turn four and during the caution period, Holtz “tapped out”, taking the blame for the incident and allowing Prunty to maintain his third place spot behind May and Scheel. Prunty was the only one of the top three to choose the outside line at the restart commitment cone and he lined up alongside May as racing resumed. May held Prunty at bay for three laps before Prunty was able to ease ahead from the outside to take the lead on lap 12. Behind Prunty and May, Shaun Scheel held down third ahead of Stephen Scheel and E.J. Waldron. The second caution flag waved on lap 20 when Jerry Eckhardt and Andy Evraets became hooked together in turn three sending Evraets’ car toward the wall where it came to rest. Prunty again chose the outside lane for the restart and he maintained the lead over May while farther back Tyler Schley’s car experienced a suspension failure and his car came to rest into turn one, putting the field back under the caution flag. As the field approached Schley’s stalled car and slowed, third place running Shaun Scheel’s car ramped over the leader Prunty’s left rear, damaging it and ending Scheel’s race. Prunty was able to continue despite the damage and he once again chose the outside groove for the restart, leaving May the inside while Stephen Scheel and Jakob Hassler lined up behind them. Prunty again worked the outside to keep his lead while Hassler also had his car working well up top and he advanced into second place, leaving May to battle with Stephen Scheel for third. Scheel and May produced the fourth caution flag of the race on lap 28 when May’s car spun in turn two as they battled for position. Scheel accepted blame for the incident and “tapped out” allowing May to maintain his third position for the restart. As the event reached a total of four caution flags, the field lined up for the restart in single file order with Prunty leading over Hassler and May. Prunty would not be denied over the closing laps and he drove to the victory over Hassler who was unable to provide a challenge for the lead despite numerous efforts. Eddie May finished third while R.J. Braun and Braison Bennett finished fourth and fifth respectively. Braun’s car did not pass post race technical inspection following the race.

Paul Wagner won the Area Sportsman feature and in the process claimed the track championship for the division. Jacob Schraufnagel battled Wagner for the title all season and finished a close second in both the points and the feature. Rich Wagner finished third followed by Andy Welter and Adam Bleskan. Paul Wagner won the Area Sportsman heat race and Jacob Schraufnagel was the fastest qualifier at 12.856 seconds.

Tom Berens drove to another win in the Super Beez feature to complete his championship season in the new class at the speedway. Nick Schmidt finished second followed by Bandon Tackes and Jayden Buckley. Robert Peterson finished fifth. Tom Berens also won the Super Beez heat race and Brandon Tackes was the fastest qualifier at 13.876 seconds.
Al Strobel won the Slinger Bee feature after a torrid battle with Marty Tackes that saw the two cross the finish line door to door with Strobel edging ahead at the checkered flag. Tom Elsinger Jr. finished third followed by Carl Benn and Anthony Dorzok. Nicole Mueller and Marty Tackes each won a Slinger Bee heat race and Anthony Dorzok was the fastest qualifier at 15.242 seconds. Matt Urban was crowned the track champion in the Slinger Bees division.

Nick Ostberg won his first career Figure 8 race to close out the day and the season. Rick Bruskiewicz and Willy Van Camp tied for the track championship in the point standings and Van Camp won the championship in a tie-breaker as his four wins bested Bruskiewicz’s three on the year. 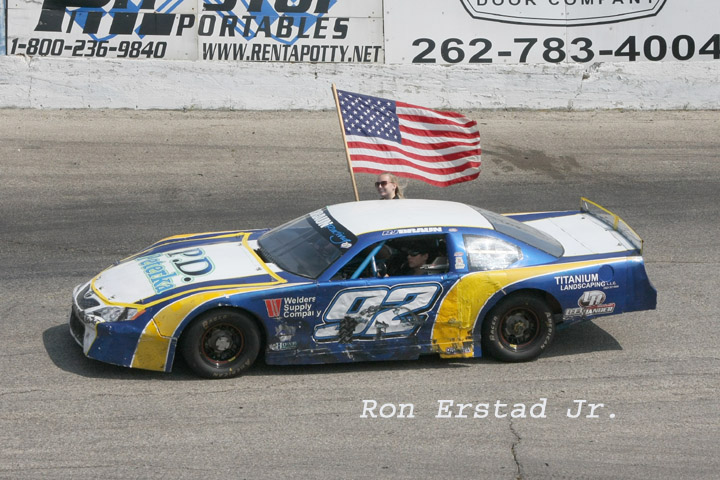 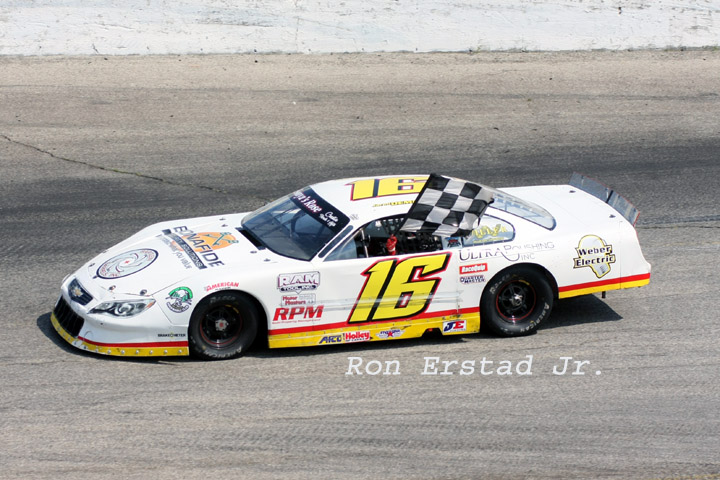 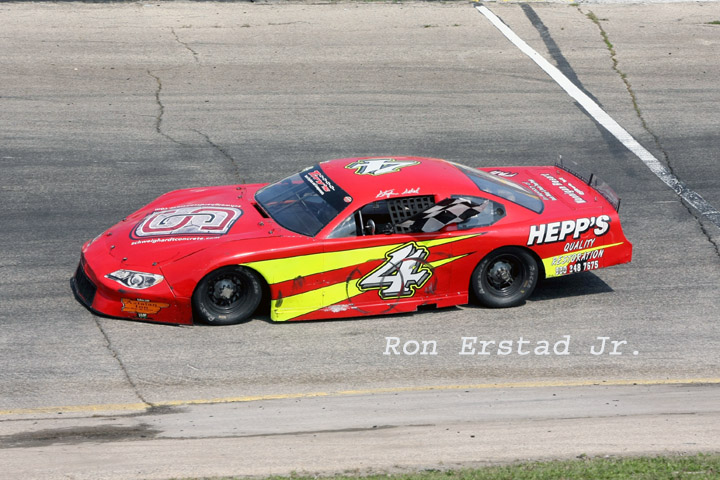 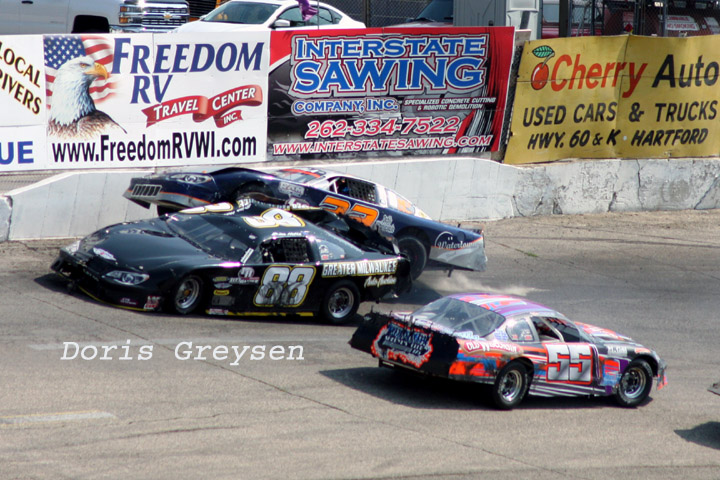 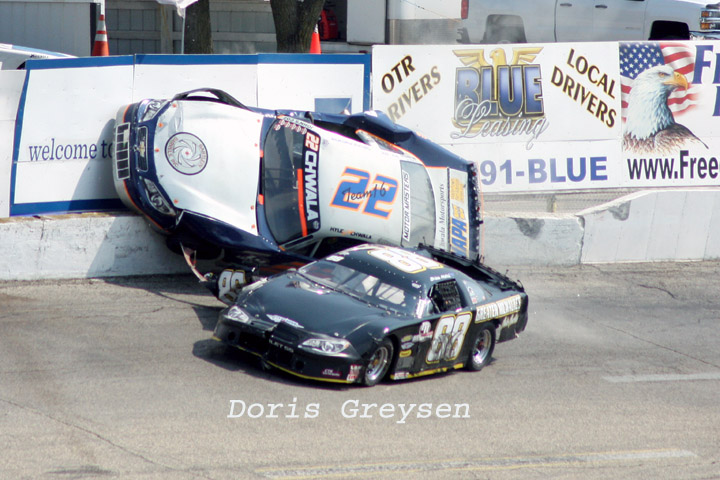 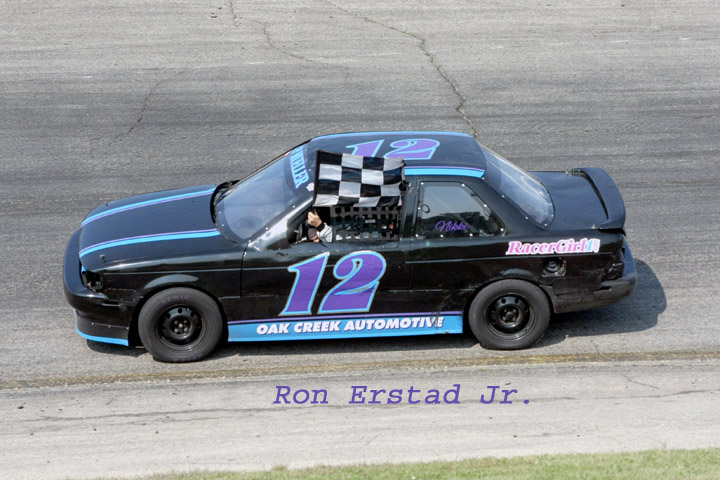 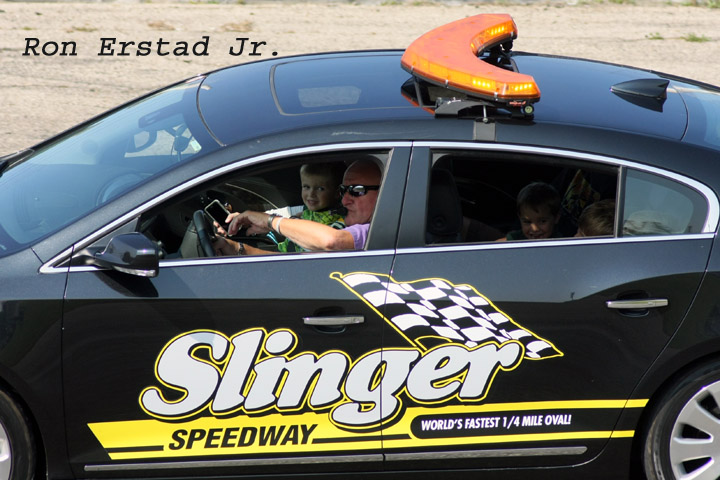 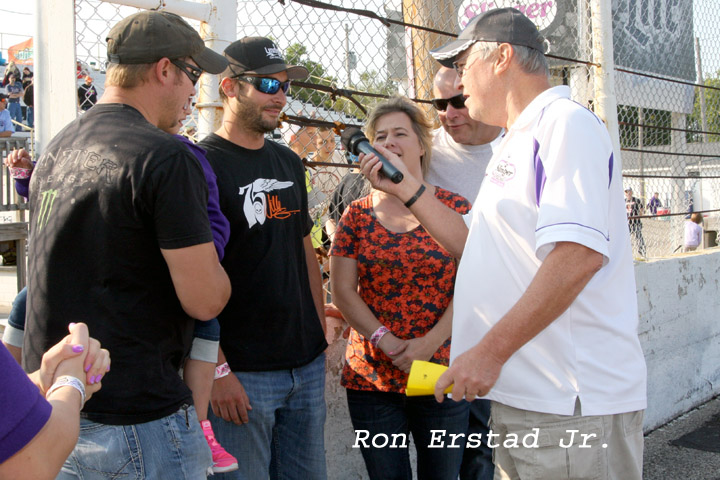 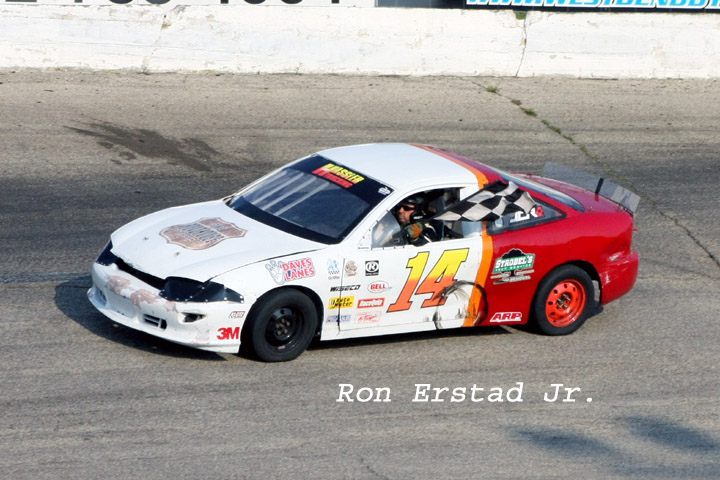 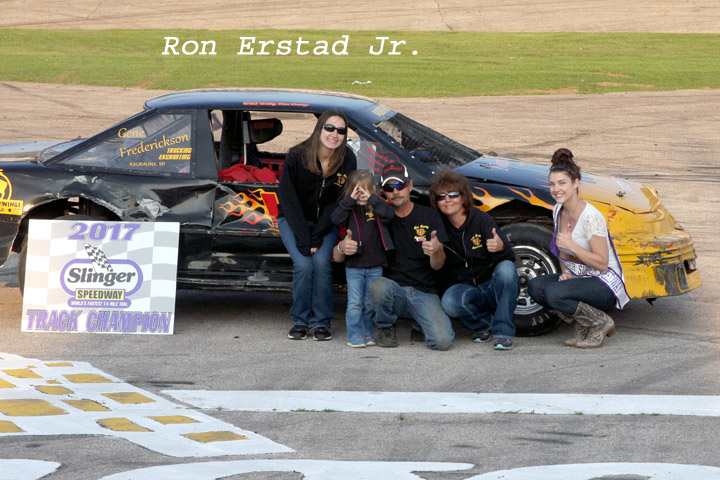