“That was a little crazy,” Prunty told the crowd from victory lane after the incident strewn race ended with a caution flag waving just after the checkered flag fell, “That’s win number 50 and we’re going to have to celebrate that.”

“Boy, I’m worn out and I can’t thank the crew enough,” Prunty continued, “It’s an excellent way to start the season and we are going to have to come back and do it again.”

“We haven’t figured out our car yet on the short runs as it takes five or six laps to get going,” LaMonte said following his second place finish that featured a torrid battle with three time track champion Steve Apel in the closing laps, “We needed a good fifteen lap run there to get by those guys and unfortunately we’d have three to five laps and a yellow flag. We just couldn’t get the car to run on the short runs.”

The battle between LaMonte and Apel came to a head with just a handful of laps to go when both cars came together in turn one and following the incident, Apel “tapped out”, essentially taking the blame for the incident and allowing LaMonte to maintain his spot for the sprint to the finish.

“I never would’ve guessed that was going to happen,”LaMonte continued referring to Apel taking the blame for the incident, “I sure appreciate that as that was a class act move and it shows why he is a three-time champion.”

Conrad Morgan finished third after being involved in a tangle with Brad Keith in turn four coming to the checkered flag as the two battled for position. After the incident Keith also “tapped out” and took the blame for the incident allowing Morgan to be credited with the third finishing position. Chris Blawat rebounded from an earlier spin to take the checkered flag in fourth place while Grant Griesbach gritted out a fifth place result. Michael Bilderback finished sixth followed by Mike Egan and Nick Wagner in seventh and eighth respectively. Rich Loch and Mike Held rounded out the top ten finishers.

The 75-lap super late model main event was slowed seven times by caution flags along with a final caution period at the finish after the checkered flag fell.

Jon Reynolds Jr. won the 40-lap late model feature over Brian Holtz and Jacob Hassler after taking the lead shortly after Ryan Gutknecht and R.J. Braun tangled while battling for the top spot.

R.J. Braun paced the early laps with Holtz, Gutknecht, Nick Egan and Hassler close behind. A tangle between Ryan Crane and Zach Braun in turn four on lap eight drew the first caution flag of the event. Braun continued to lead as racing resumed while Gutknecht slipped into second. Gutknecht and Braun began to battle for the top spot with Braun using the outside lane and Gutknecht taking the inside. On lap 15, Gutknecht’s car twitched loose slightly and caught the rear of Braun’s car as both spun in front of the field, drawing the caution and moving Jon Reynolds Jr. into the lead.

Reynolds maintained the top spot over Brian Holtz while Jacob Hassler, Dennis Prunty, Nick Egan, and E.J. Waldron all raced for the third position. Another caution flag waved on lap 19 for an incident on the backstretch involving Jerry Mueller and Dale Nottestad which damaged both cars too severely to continue. Once again Reynolds held onto the lead over Holtz and Hassler took possession of third place ahead of Prunty and Egan. Reynolds did not look back over the final laps as he held Holtz at bay to take the victory while Hassler finished in third. E.J. Waldron advanced in the closing laps to finish fourth while Ryan Gutknecht recovered from the earlier incident to take the checkered flag in fifth.

Ryan Lovald drove to victory in the ten lap Figure 8 event to close out the afternoon. 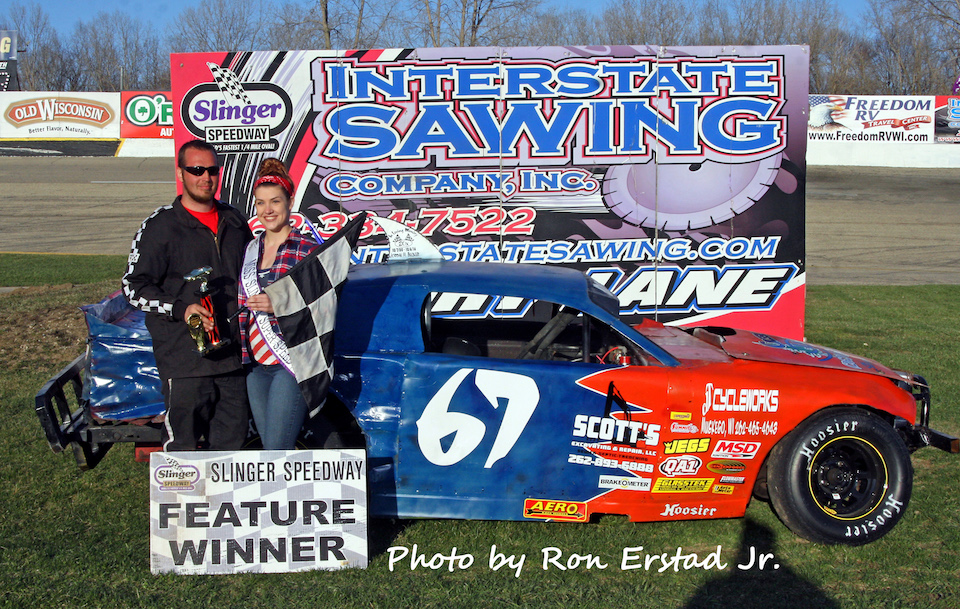 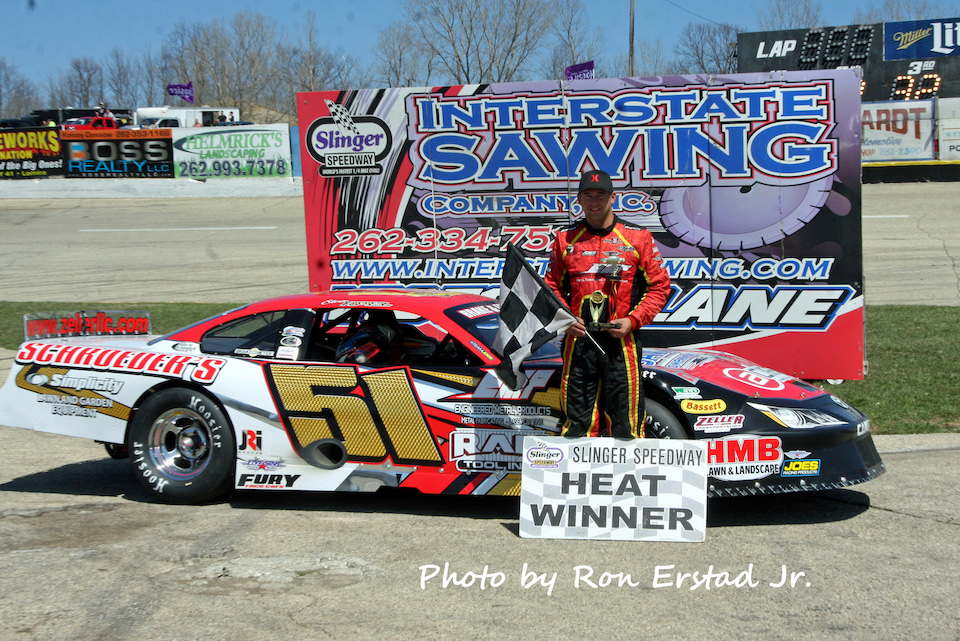 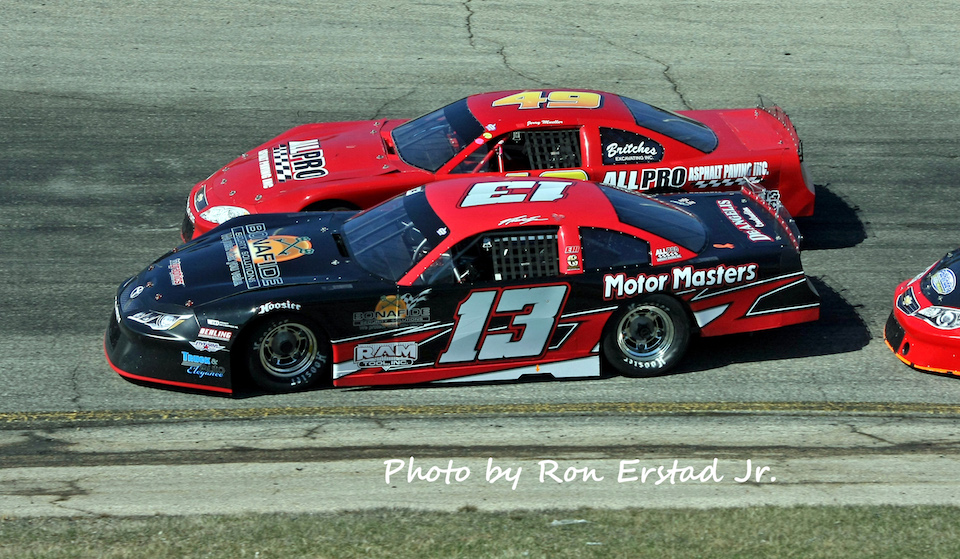 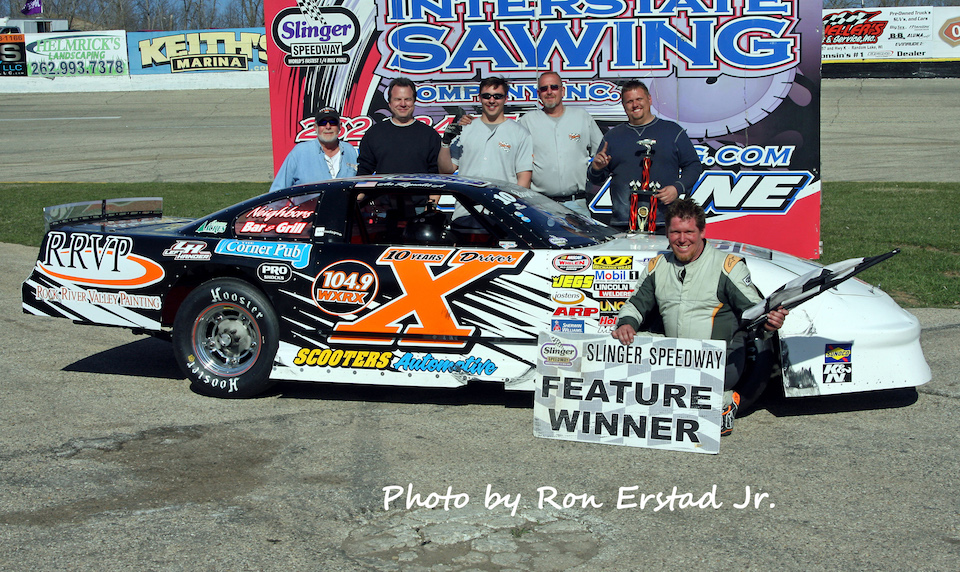 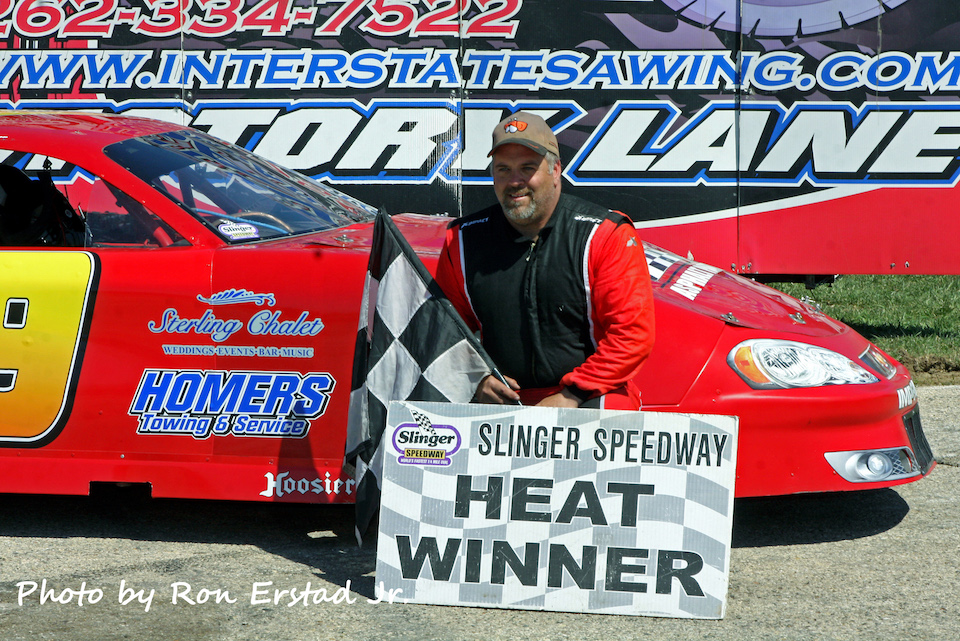 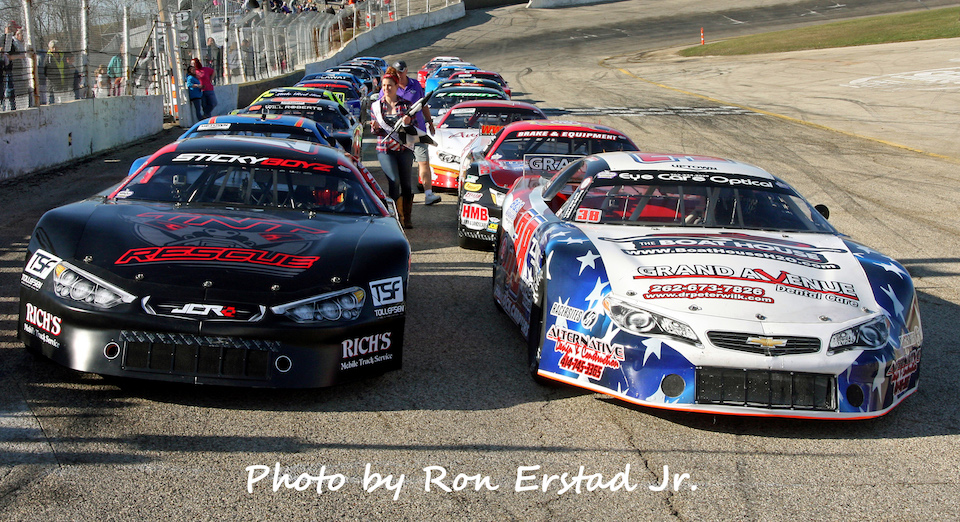 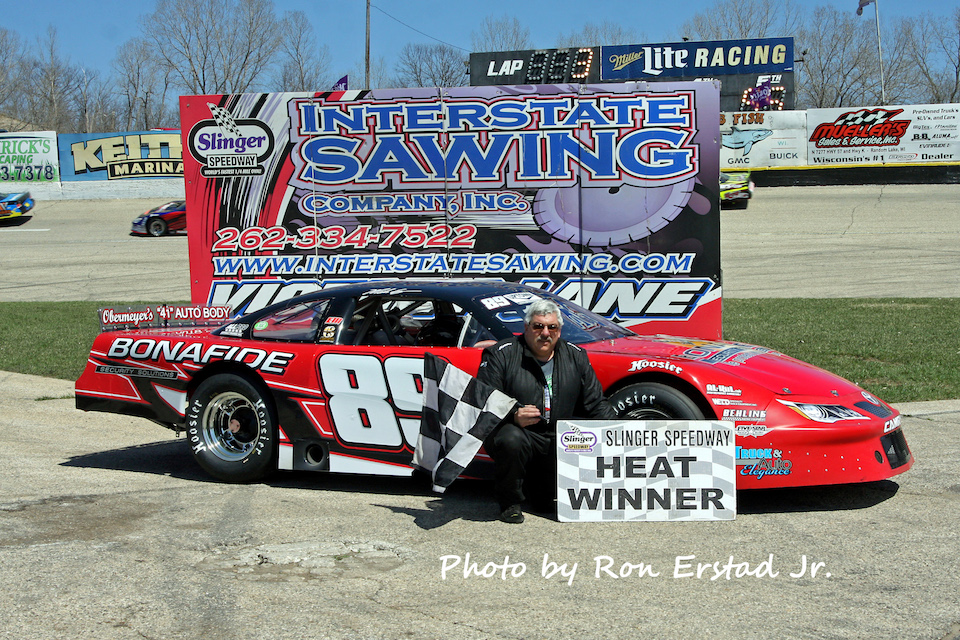 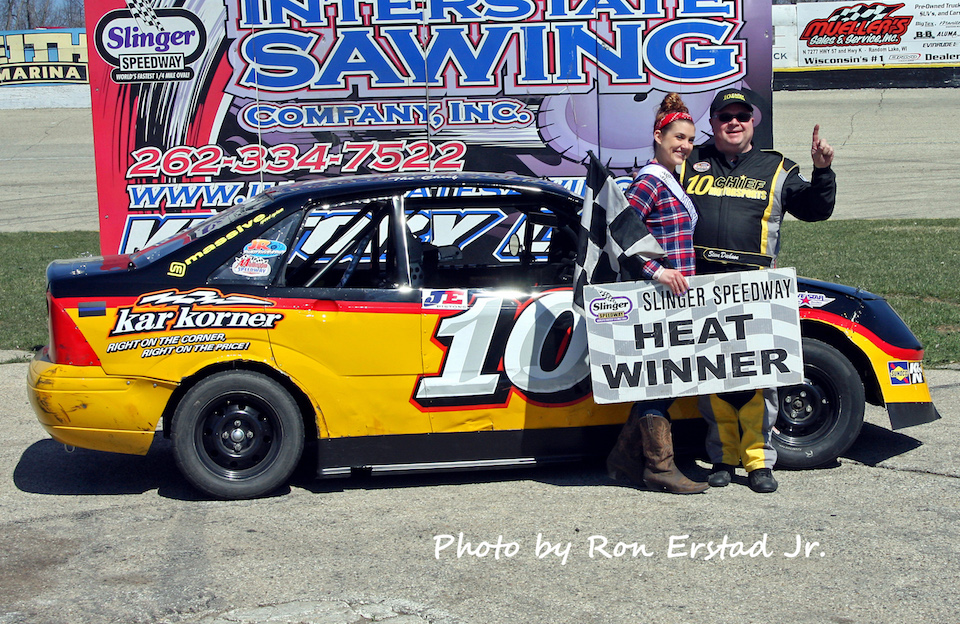 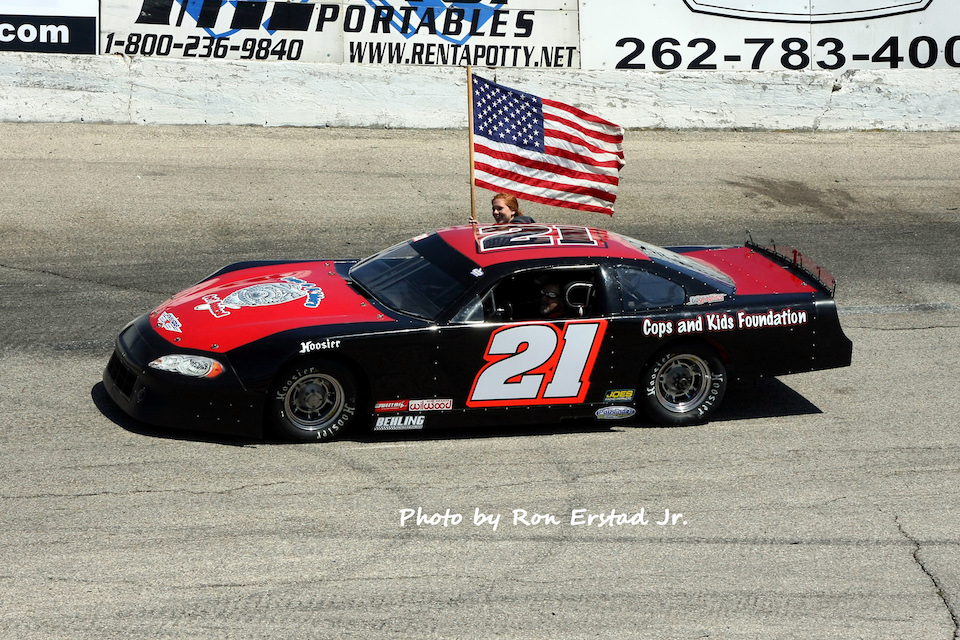