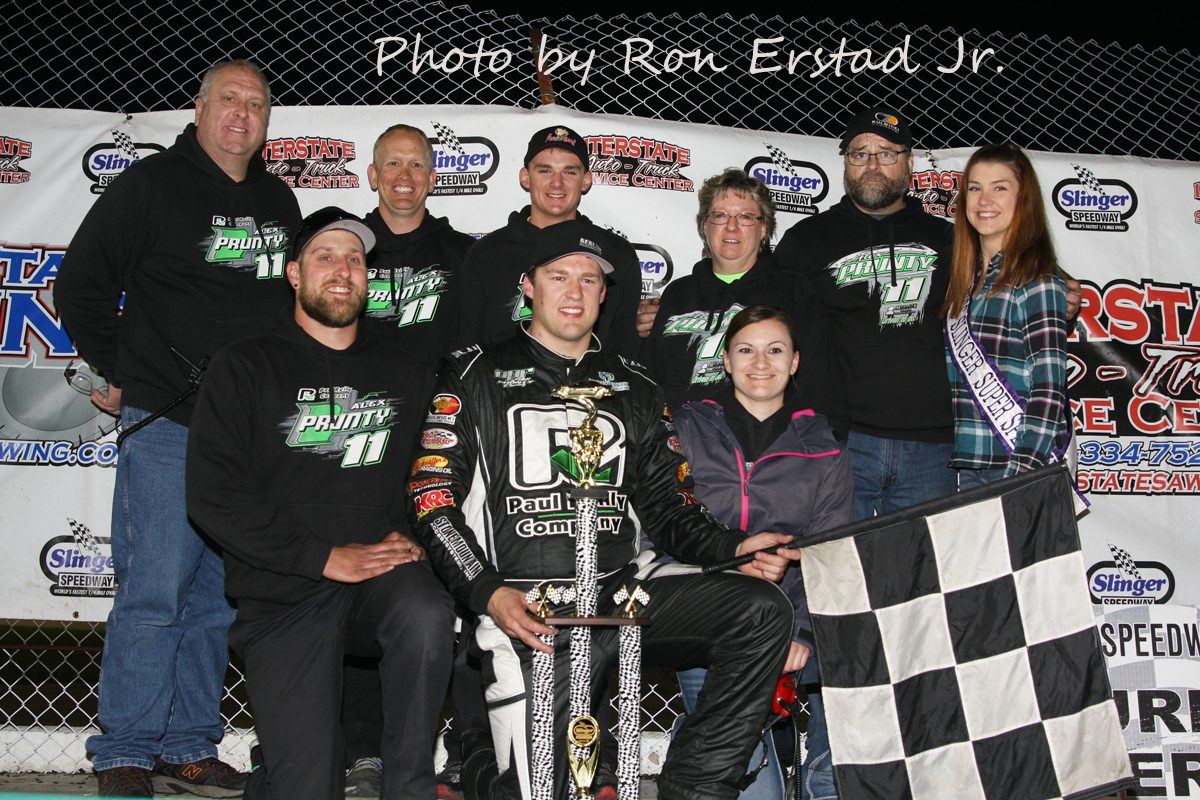 By Dan Margetta
Slinger, Wis., May 20—Just prior to the start of the Slinger Speedway racing season, Alex Prunty’s mother suffered a brain aneurysm and Sunday night was the first time she was at the track since being released from the hospital. It made for an emotional night as Prunty won his first super late model feature of the year and added his name to the prestigious list of winners of the Alan Kulwicki Memorial.

“It’s unbelievable and it’s the first race my mom was able to make after a brain aneurysm and she has been in the hospital for a long time and we’re just happy to have her back,” Prunty told the crowd from victory lane, “The Alan Kulwicki Memorial is awesome as obviously there are a lot of big names who have won and with the Kulwicki Driver Development Program and everything those guys have done for me, there are just a lot of emotions going through my head right now.”

Prunty took the lead from defending Kulwicki Memorial winner Conrad Morgan just after a restart on lap 27 and then had to hold off numerous challenges from Dennis Prunty who had won the first two super late model features and was undefeated at the track in 2018.

“It wasn’t bad but I started back farther and had a long ways to go and burned up my tires,” Dennis Prunty stated after his second place finish, “And I knew if I touched him he would spin out so I figured I would stay off him and do the best I could.”

“We’re getting there,“ third place finisher Steve Apel said after the race, “I just kind of fell back and was trying to ride and didn’t want to really get involved with the top two, but all in all the car is in one piece and the nose is clean.”

Pole-sitter Tim Lampman paced the first two laps before Conrad Morgan took command from the outside on lap three, bringing Alex Prunty along with him into second. Chris Blawat and Gary LaMonte also made their way by Lampman to move into third and fourth and a few laps later, Dennis Prunty and Steve Apel joined them as Morgan continued to lead over Alex Prunty. The running order behind the top two shuffled as first Apel nudged Lamonte for position in turn four and a lap later, Dennis Prunty used a similar move to get by Blawat and when everything sorted out, Prunty had third ahead of Apel, LaMonte, and Blawat. The first and only caution flag of the event occurred on lap 26 for a tangle between Rich Loch and Tim Lampman in turn four which allowed the rest of the field to close in on Morgan and Alex Prunty.

Morgan chose the inside lane for the restart, leaving Alex Prunty the outer groove which proved beneficial as Prunty charged from the top side as racing resumed, completing the pass for the lead the next lap around. The outside lane became the preferred place to be as Dennis Prunty, Apel, LaMonte, and Brad Mueller all used it to advance forward. In the final laps, Dennis Prunty ran down Alex Prunty and made several attempts to pass on the inside but each time was denied as Alex Prunty was able to power off the turns to maintain the lead. With eight laps to go, Dennis Prunty tried an inside move once again but his car washed loose in turn two and as he regained control, Alex Prunty scooted away with the lead. Alex Prunty could not be caught from there and he drove to his first super late model feature victory of the season, leaving Dennis Prunty to settle for second while Steve Apel took the checkered flag in third. Gary LaMonte finished fourth and Brad Mueller was fifth. Conrad Morgan crossed the line in sixth followed by Chris Blawat and Ryan DeStefano in seventh and eighth respectively while Grant Griesbach and Brad Keith rounded out the top ten.

Super late model heat races were won by Rich Loch and Alex Prunty while Gary LaMonte was the fastest qualifier after touring the speedway in 11.243 seconds.

Jack Stern captured his first career late model feature victory in the 40-lap main event and celebrated with a few spinning doughnuts on the front straightaway.

Shaun Scheel charged to the lead at the drop of the green flag as Stern slotted into second just ahead of Brian Holtz. The race quickly fell under the caution flag for a Tom Jasinski spin off turn four on lap three and once racing resumed, the yellow appeared again when R.J. Braun experienced mechanical issues down the backstretch. Scheel continued to lead over Stern as the race resumed once again with Ryan Gutknecht taking over third from Holtz. Behind the top four, the field was bunched up and when Jakob Hassler’s car slid across the nose of Kyle Chwala’s machine down the backstretch on lap eight, the ensuing incident collected the cars of Braison Bennett and Nick Roehl.

Scheel chose the inside for the restart and Stern used the outside lane to challenge for the lead as the green flag waved again. After several laps of side by side battling, Stern was able to edge ahead from the outer lane to take command of the race. Once out front, Stern began to pull away slightly as Scheel and Gutknecht began an intense and aggressive battle for second with Kyle Chwala waiting patiently in their tire tracks. As the battle between Scheel and Gutknecht waged on, Chwala was eventually able to drive around both of them on the outside as Stern maintained his lead out front. Stern scored the victory for his first career late model feature win as Chwala edged Scheel for second with Gutknecht finishing a close fourth. Brian Holtz finished fifth.

Late model heat races were won by Nick Roehl and Jack Stern and Kyle Chwala was the fastest qualifier at 12.161 seconds. 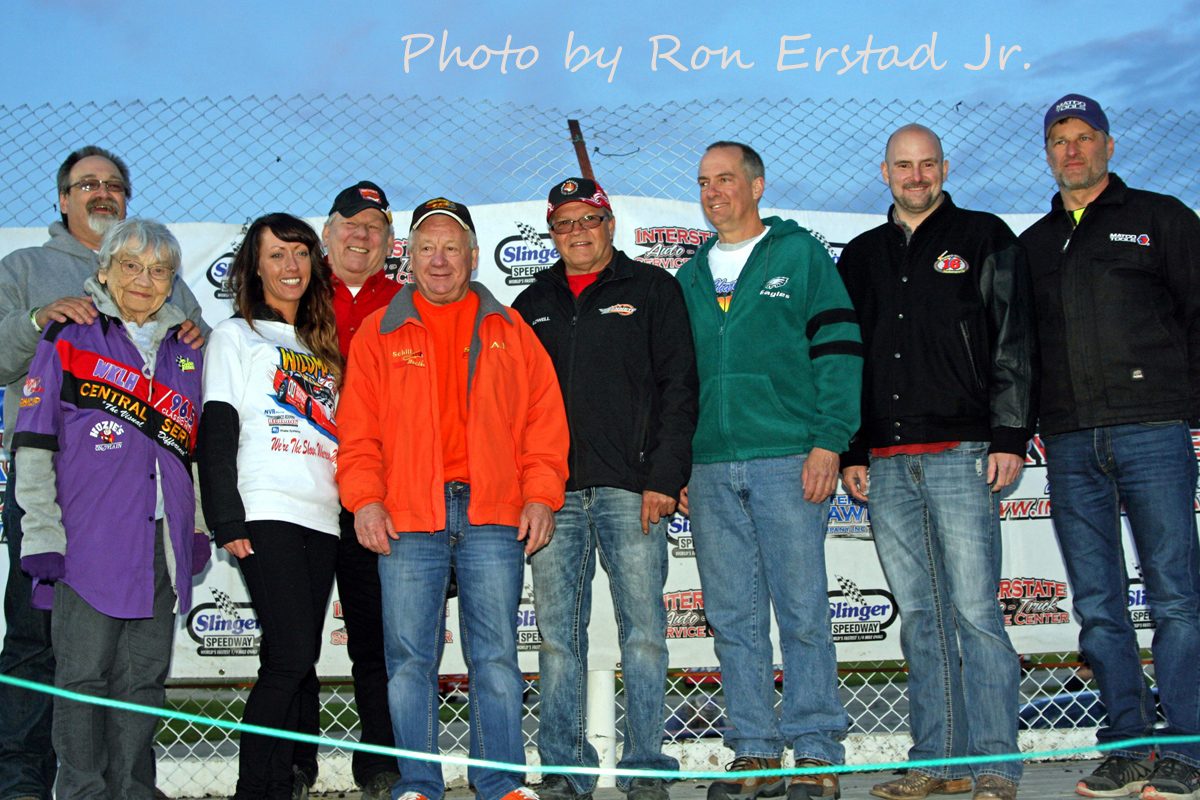 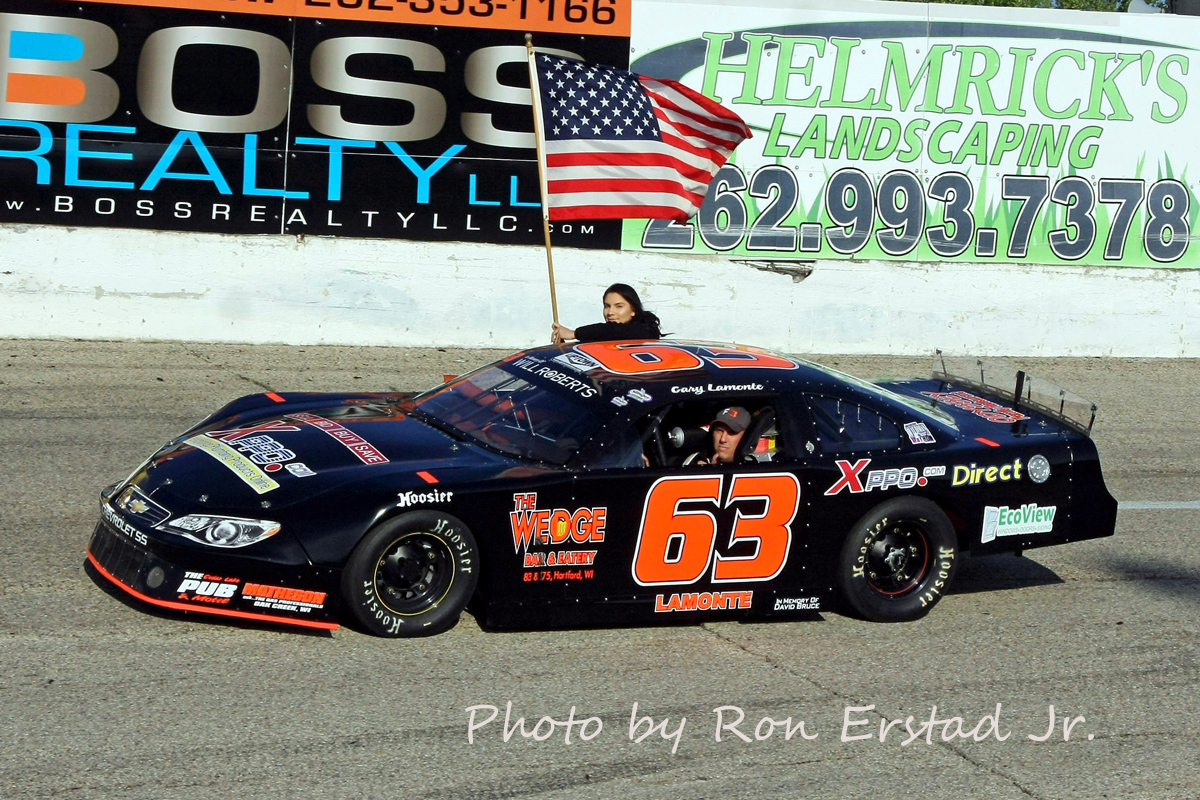 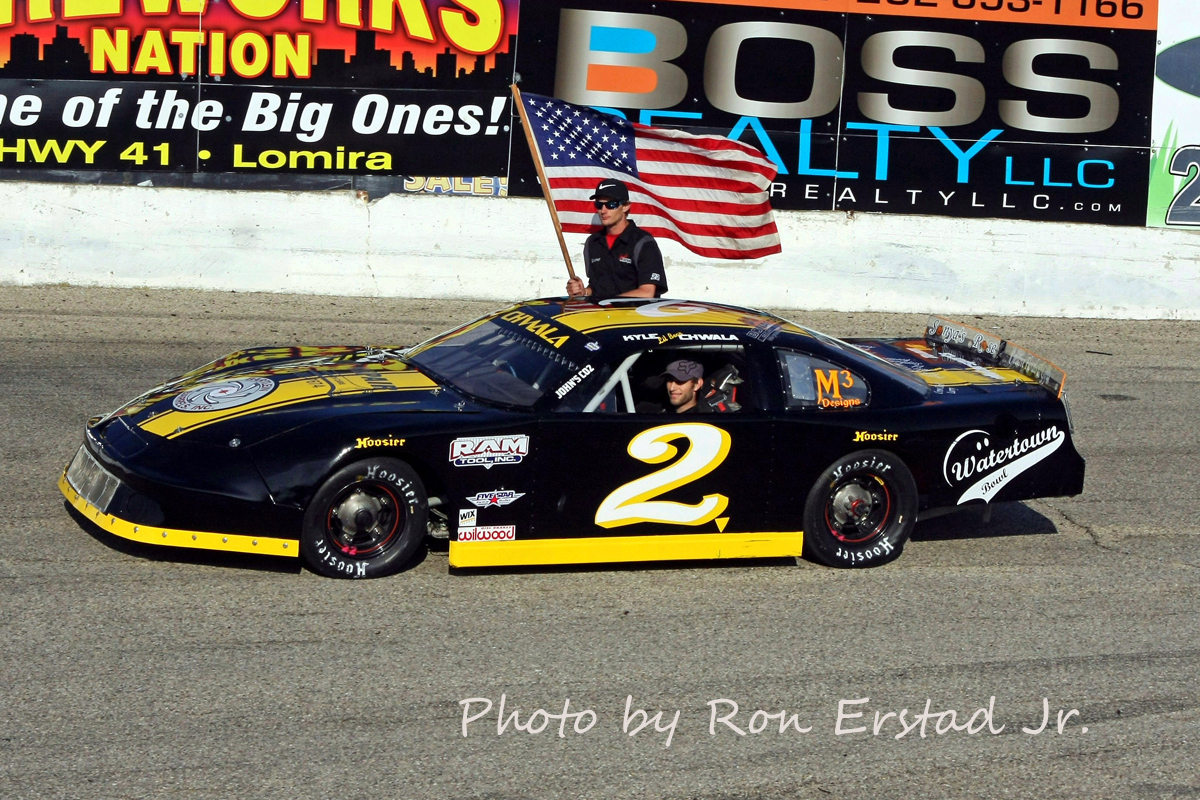 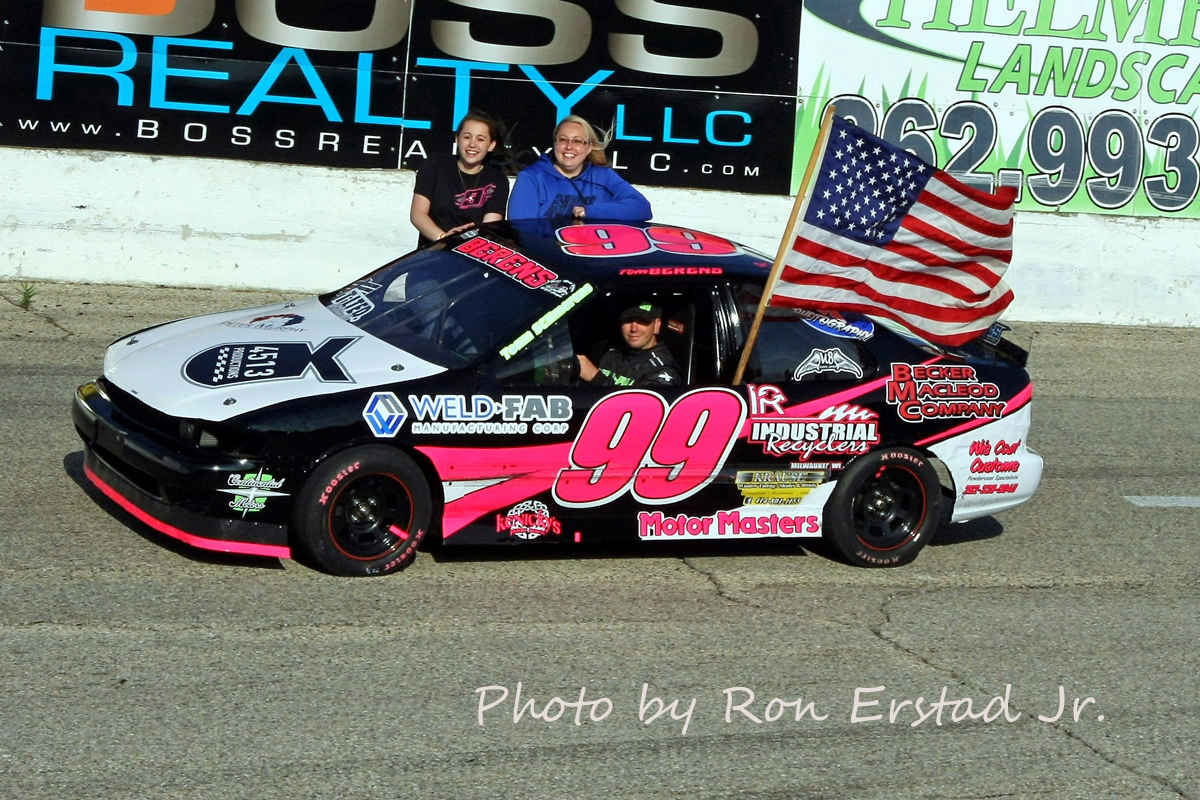 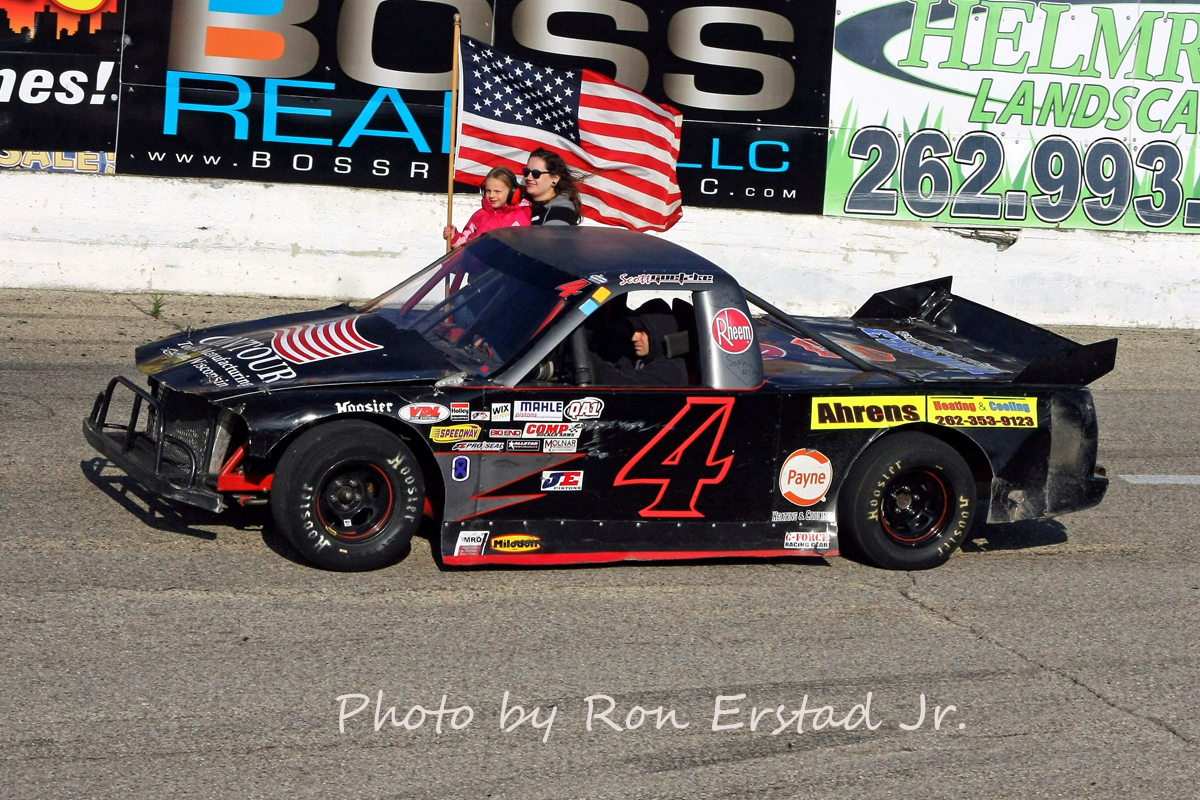 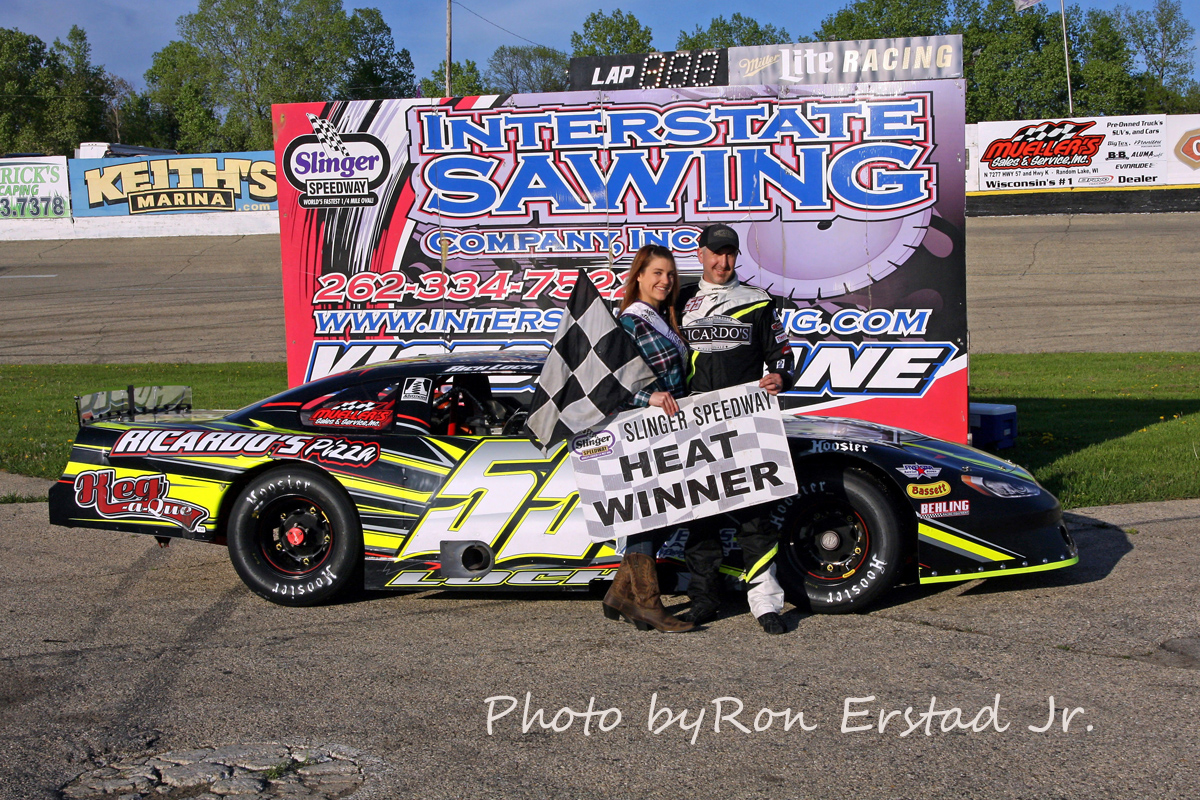 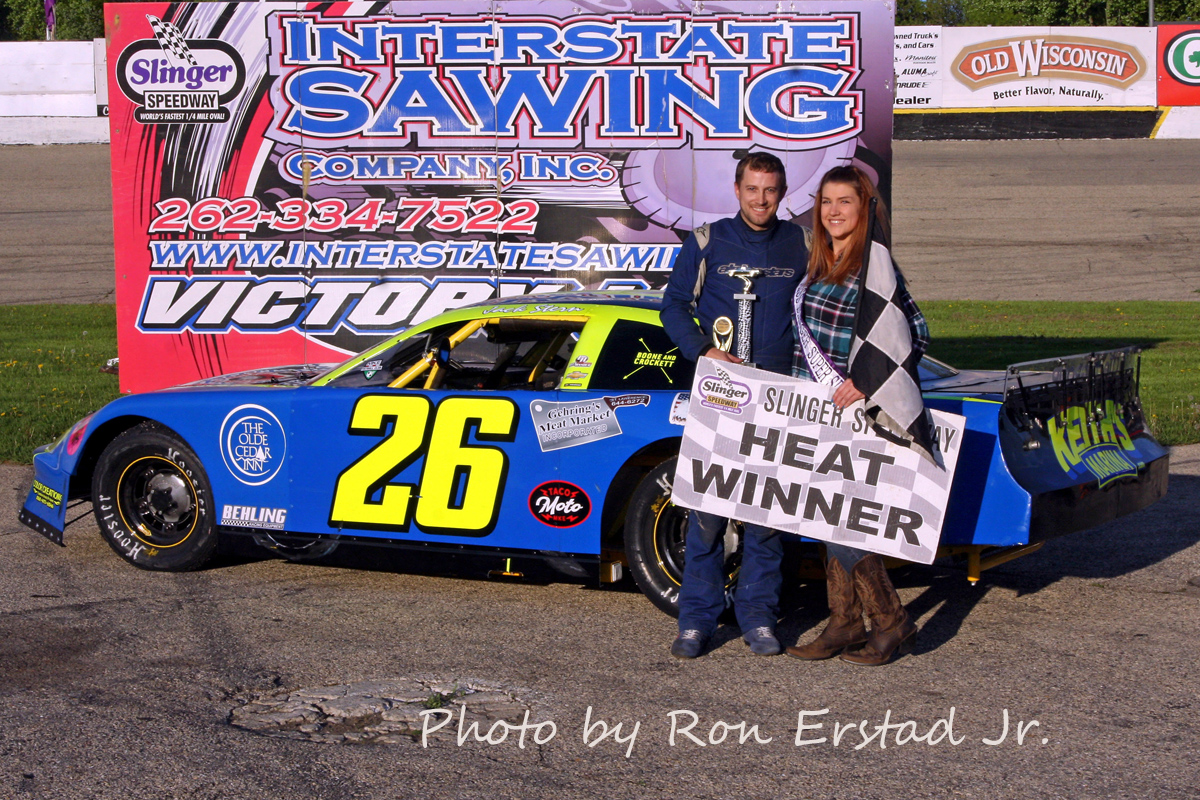 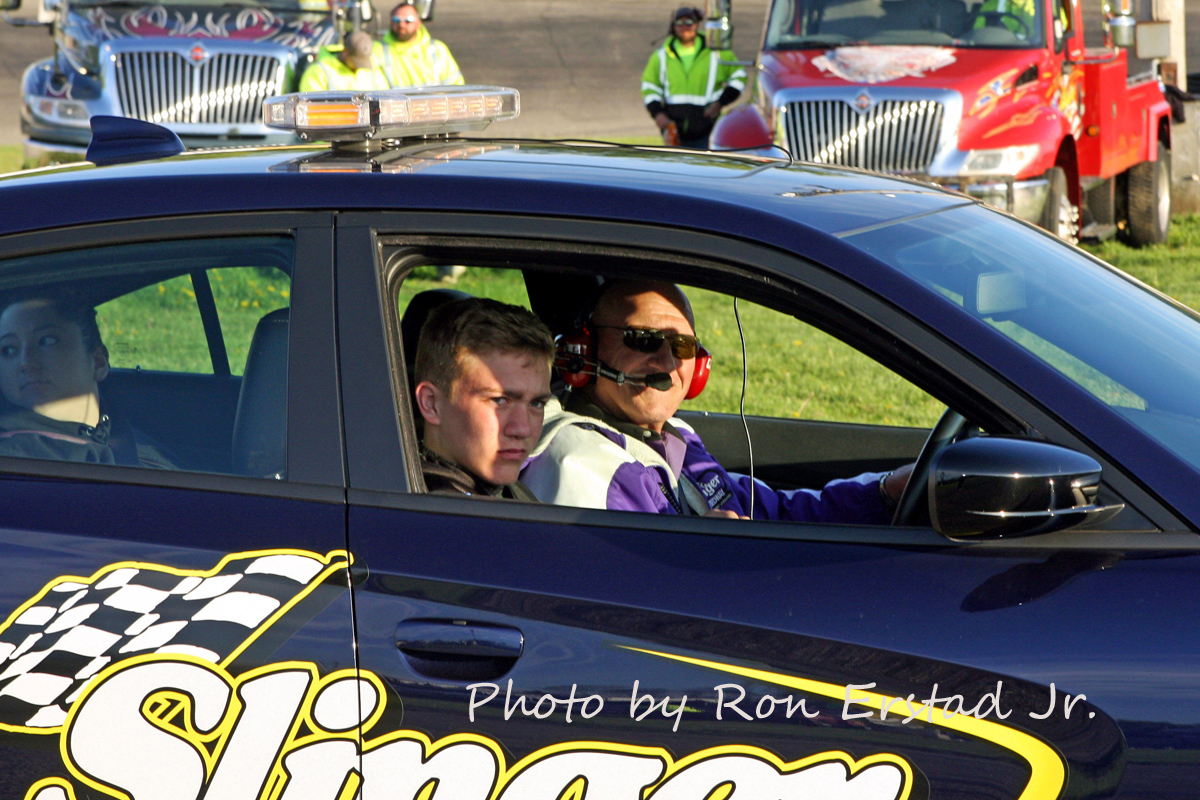 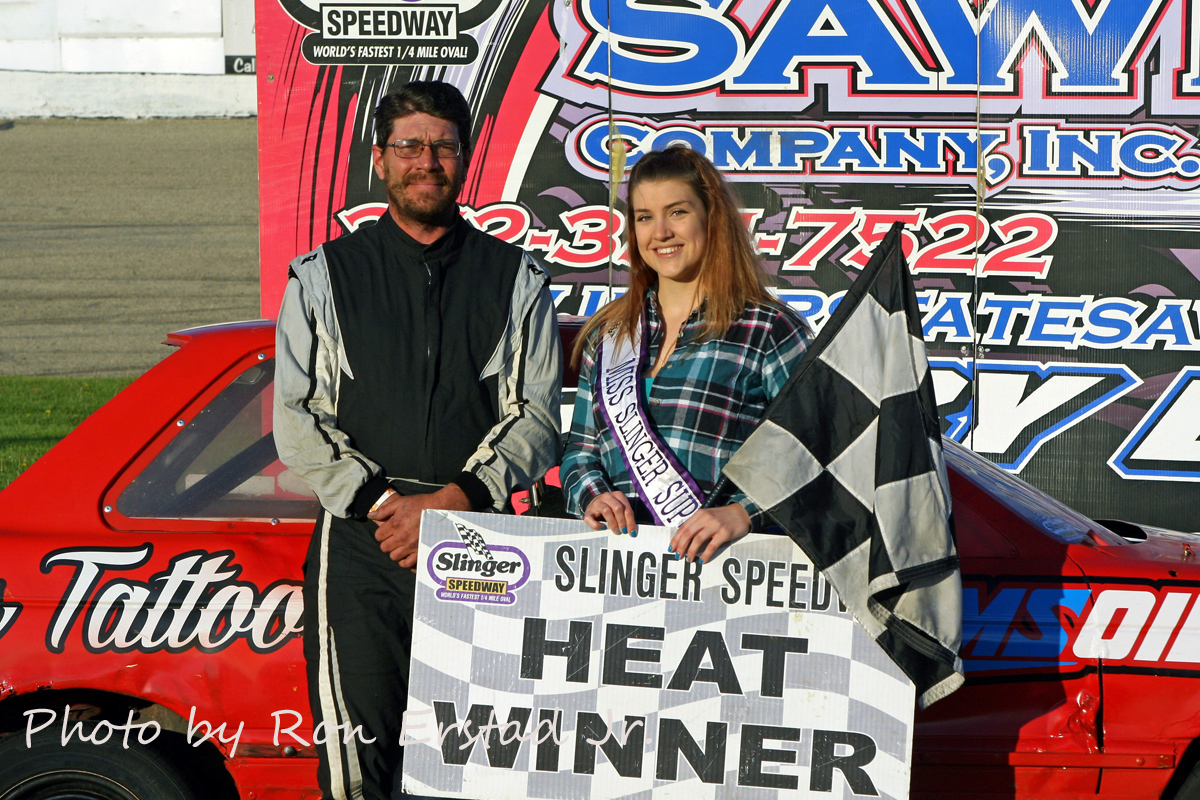 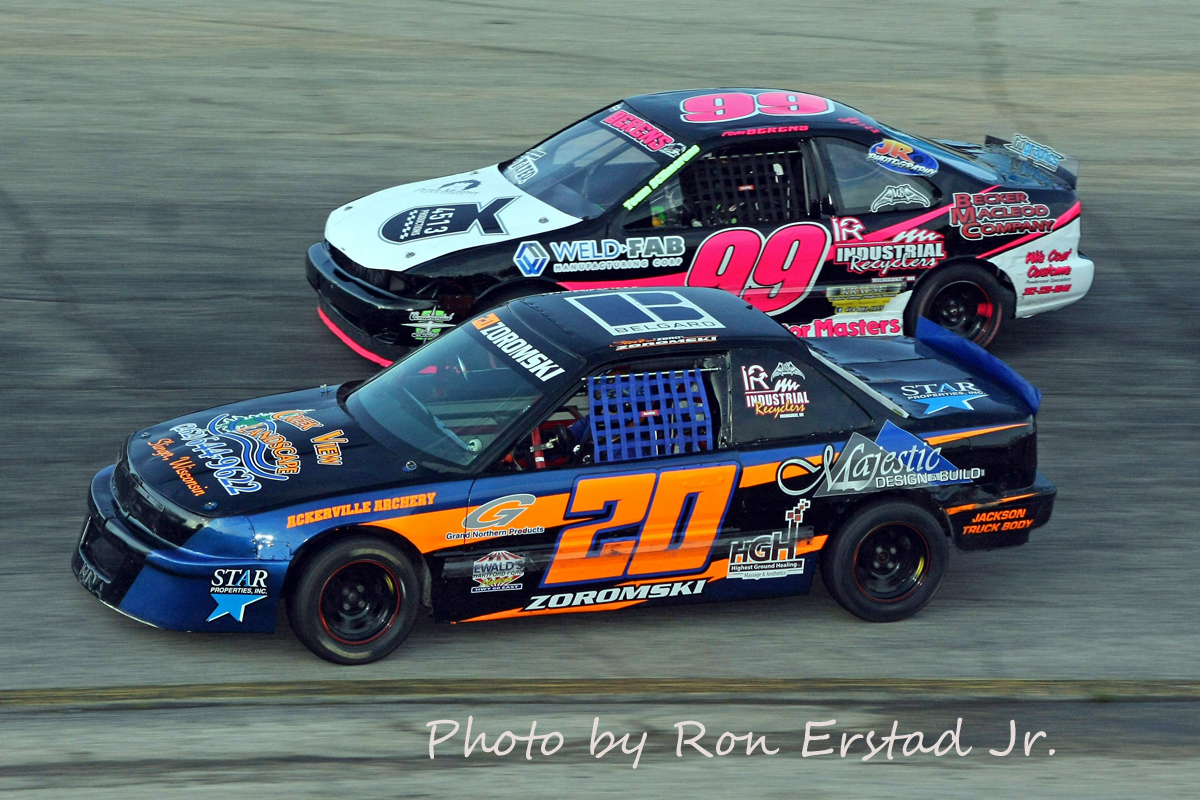 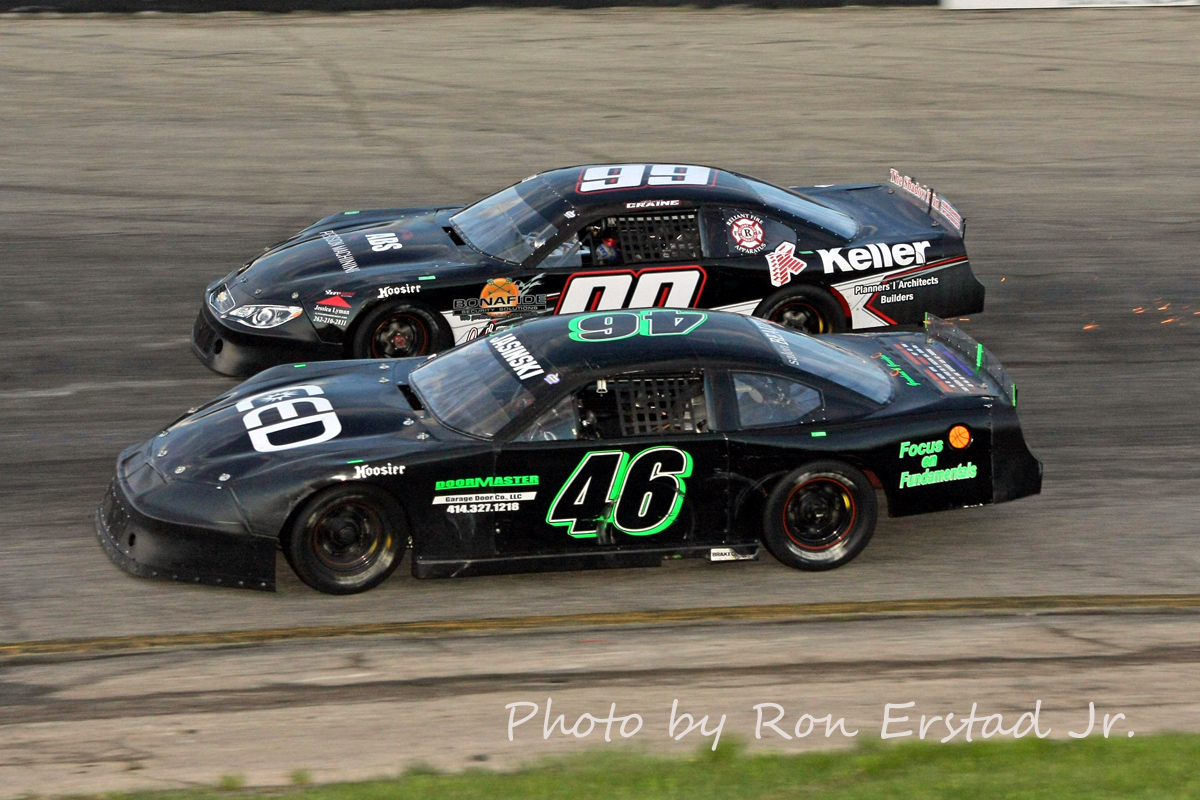