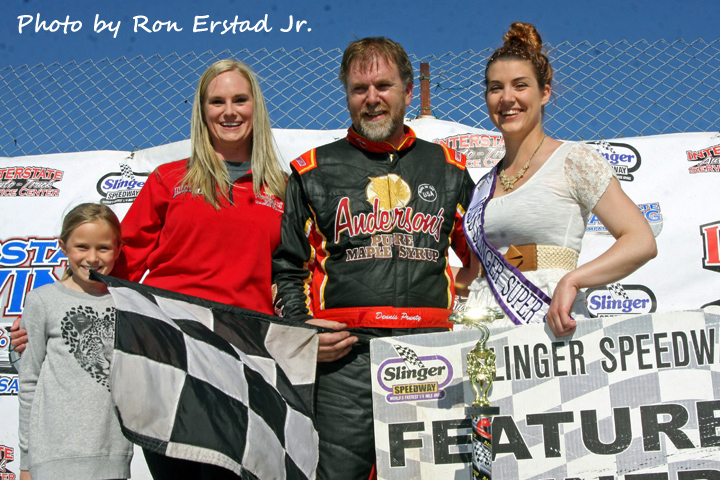 “The crew worked really hard and we set the car up for a lot of cautions, but then we weren’t getting the cautions and it was getting a little loose, “Prunty stated from victory lane, “All we needed was that caution and I knew it would be good on the restart.”

“When he was goofing around on the restart,” Prunty continued describing the final restart with ten laps to go where he overtook Alex Prunty for the lead, “I thought I’ll just do what I’ve got to do and that’s what I did.”

“You saw exactly what I saw,” Alex Prunty lamented afterwards describing his second place finish, “He knew what he was going to do and he did it and I didn’t stop it and that’s what it is.”

Nick Wagner and David McCardle brought the field to the green flag with Wagner launching into the early lead as Alex Prunty settled into second and Gary LaMonte into third as both McCardle and Brad Keith became caught in the outside groove. Chris Blawat and Dennis Prunty also slipped by on the inside to take over fourth and fifth respectively as Wagner began to feel pressure for the lead from Alex Prunty. Alex Prunty worked his way to Wagner’s inside to complete the pass for the lead while LaMonte followed in is tire tracks and into second place. Blawat and Dennis Prunty raced alongside each other over fourth directly behind Wagner with Blawat’s car twitching loose off turn two causing him to lose ground as Dennis Prunty worked his way past Wagner and into third.

Gary LaMonte tracked down Alex Prunty for the top spot and began to make numerous stabs at the lead by edging the nose of his car to the inside of Prunty’s left rear fender. Each time however, Alex Prunty was able to fend off the challenges with a strong run off the turns as the side by side racing up front allowed Dennis Prunty to catch the top two. As the leaders approached lapped traffic at the halfway point, LaMonte tried to squeeze in behind Alex Prunty and just ahead of Dennis Prunty and in doing so made slight contact with Alex Prunty’s rear fender, sending him into a spin off turn two to draw the caution flag. LaMonte “tapped out” at the start/finish line, taking the blame for the incident and allowing Alex Prunty to maintain the lead.

Alex Prunty chose the outside lane for the restart and as racing resumed he was able to fend off the challenges Dennis Prunty gave him from the inside lane while Chris Blawat and Conrad Morgan raced over third place behind them. Morgan developed a severe tire rub and had to exit the speedway, leaving Brad Keith to move into fourth place just ahead of the battle for fifth between Wagner and Ryan DeStefano. While the racing stabilized up front, Gary Lamonte was making a charge from the back of the field and he was able to advance all the way to fourth place with ten laps to go when the caution flag waved again for a tangle between David McCardle and Nick Wagner in turn one.

Once again Alex Prunty chose the outside for the restart, leaving the inside lane for Dennis Prunty and after an aborted attempt at going back to green, the pair raced side by side into turn one as racing resumed. This time around Dennis Prunty held tough on the inside and he was able to muscle into the lead after several laps of side by side battling. Alex Prunty was able to maintain second place by sliding in directly behind Dennis Prunty with LaMonte right on his tail in third. The top three remained unchanged all the way to the checkered flag with Dennis Prunty scoring the victory over Alex Prunty and Gary LaMonte. Chris Blawat finished fourth while Brad Keith crossed the finish line in fifth. Ryan DeStefano finished sixth followed by Mike Held and Nick Wagner in seventh and eighth place respectively while Jerry Eckhardt and David McCardle rounded out the top ten.

Super late model heat race victories were captured by Alex Prunty and Brad Keith while Dennis Prunty was the fastest qualifier with a lap of 11.265 seconds.

After a lap one incident damaged several cars including those of Brad Hetzel, Ryan Gutknecht, and R.J. Braun, Stern paced the opening laps before E.J. Waldren was able to pass by for the lead. The caution flag waved again right around the halfway mark for an incident between Jordan DeVoy and Nick Roehl in turn four after which DeVoy “tapped out” and took the blame for the mishap. Reynolds was able to outduel Waldron on the restart and he charged into the lead, maintaining the top spot as Stern began to advance his way forward. On the final lap, Stern was able to muscle his way alongside Reynolds entering turn one but as the two raced toward turn three with Reynolds slightly ahead, Stern ran out of room and his car looped around in turn four as the checkered flag waved with Reynolds scoring the victory. E.J. Waldron finished second followed by Jordan DeVoy in third while Jakob Hassler and Nick Roehl rounded out the top five finishers.

Late model heat races were won by Nick Roehl and Dennis Prunty while Jon Reynolds Jr. was the fastest qualifier at 12.025 seconds.
Jason Thoma passed Adam Bleskan to take command of the 30-lap Area Sportsman feature by lap ten and he drove to the victory over Jacob Schraufnagel. Paul Wagner bested Rich Wagner for third place while Jay Kalbus took the checkered flag in fifth. Jason Thoma won the Area Sportsman heat race and Jacob Schraufnagel set a new track record in qualifying by circling the speedway in 12.771 seconds.

Scott Goetzke closed out the afternoon by winning the 10-lap Figure 8 race over Rick Bruskiewicz and Willy Van Camp. 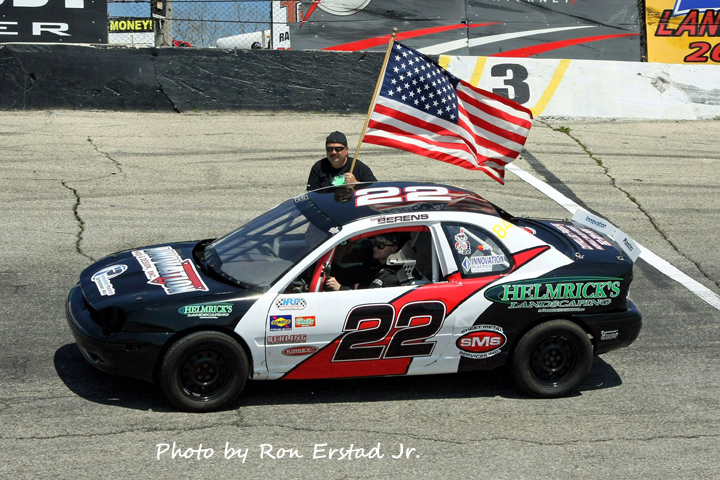 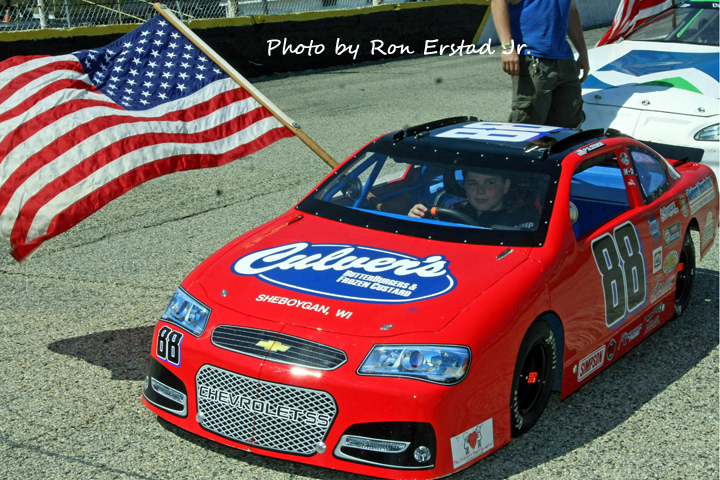 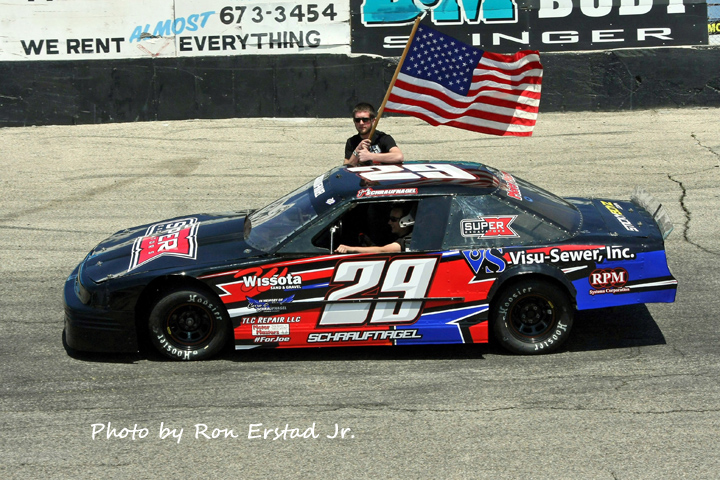 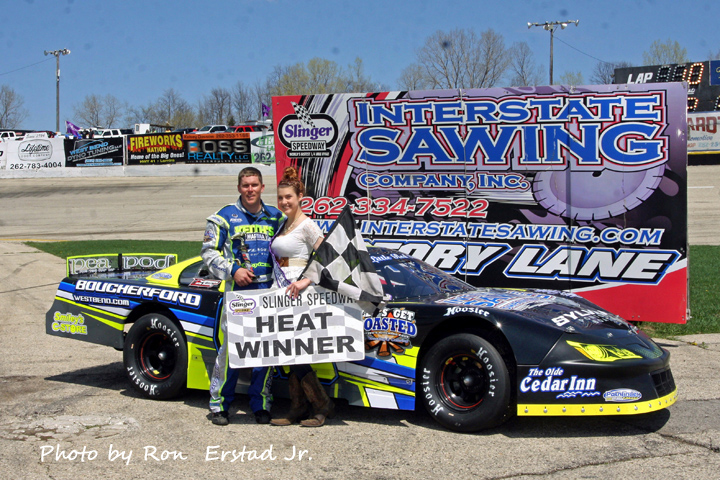 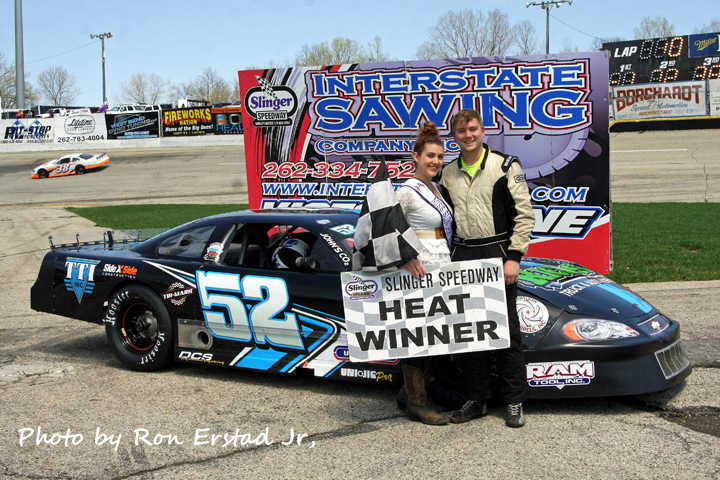 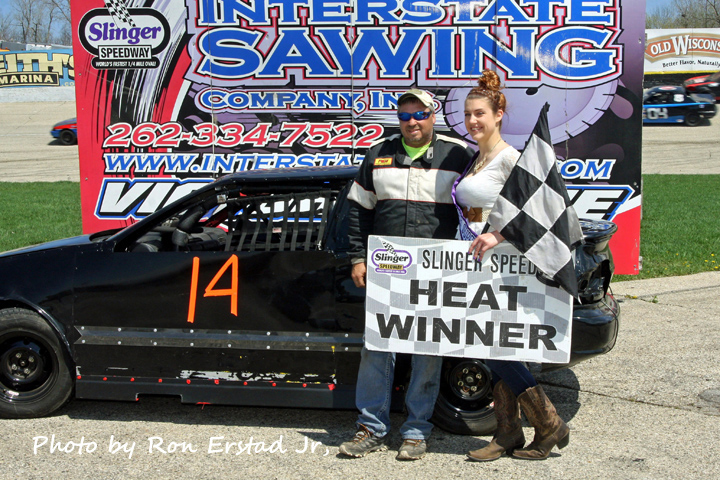 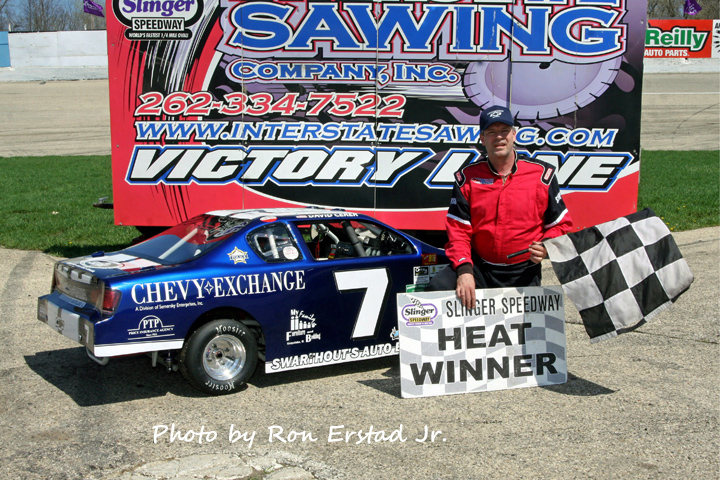 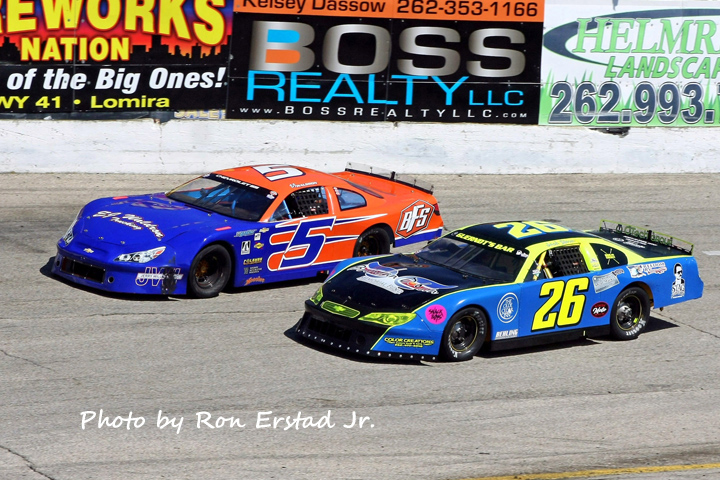 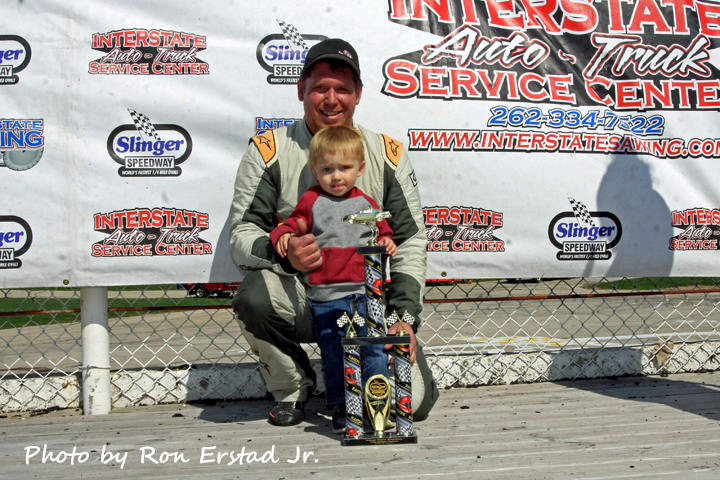 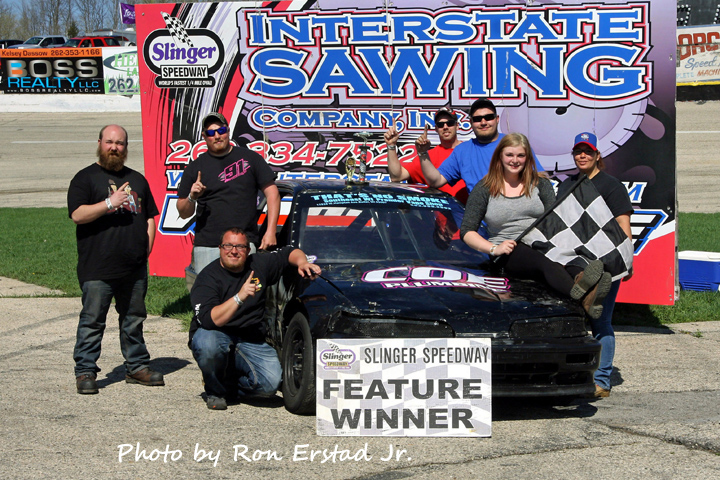 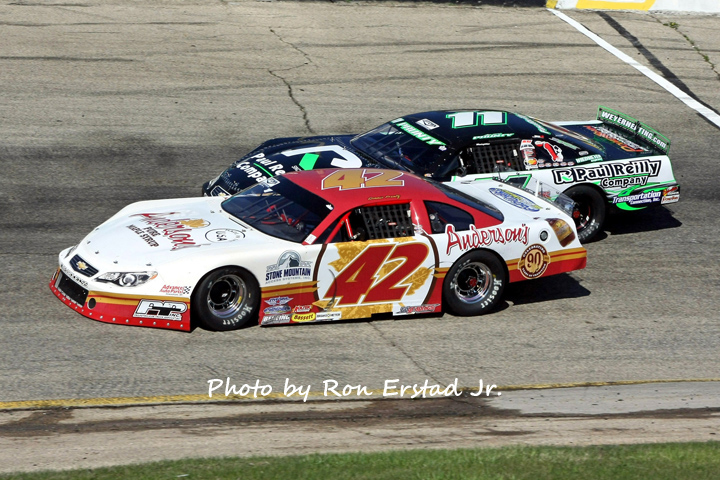 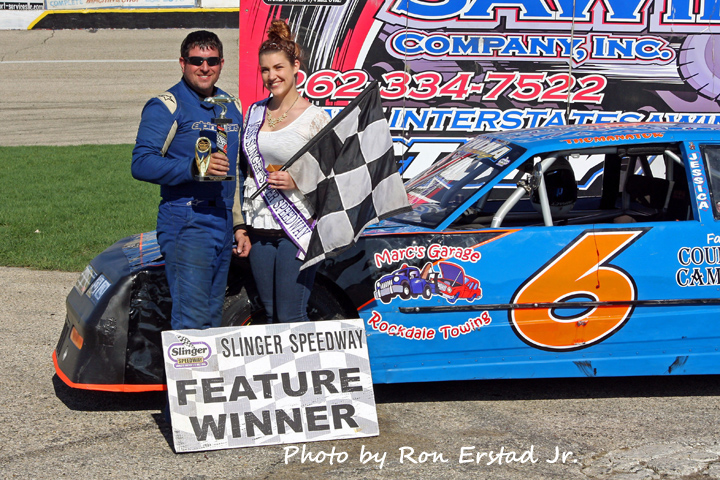 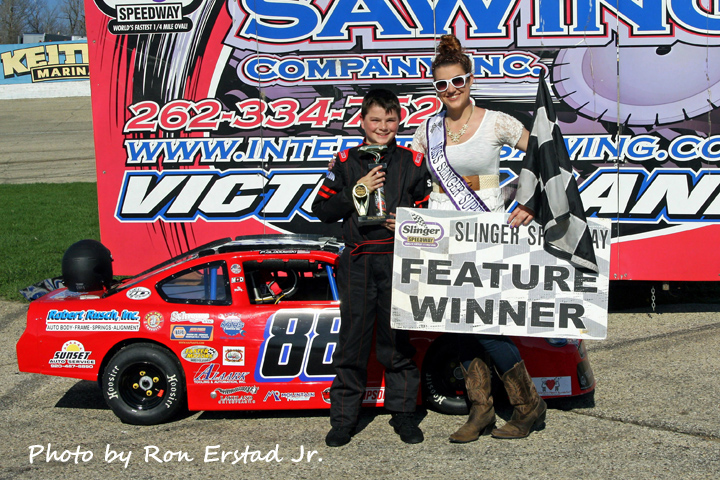 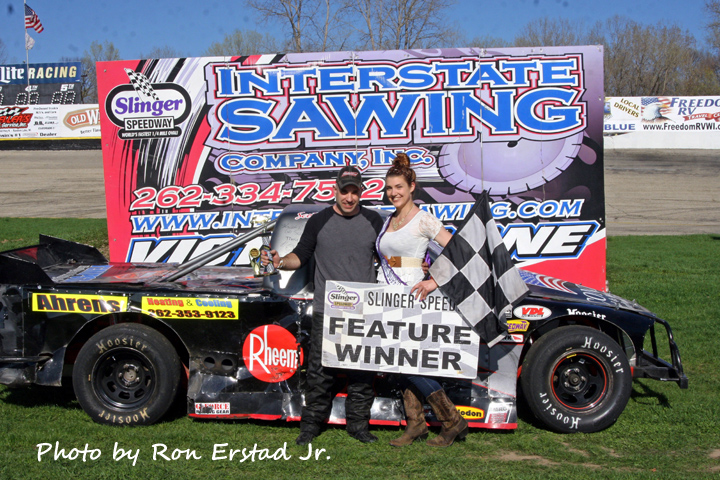