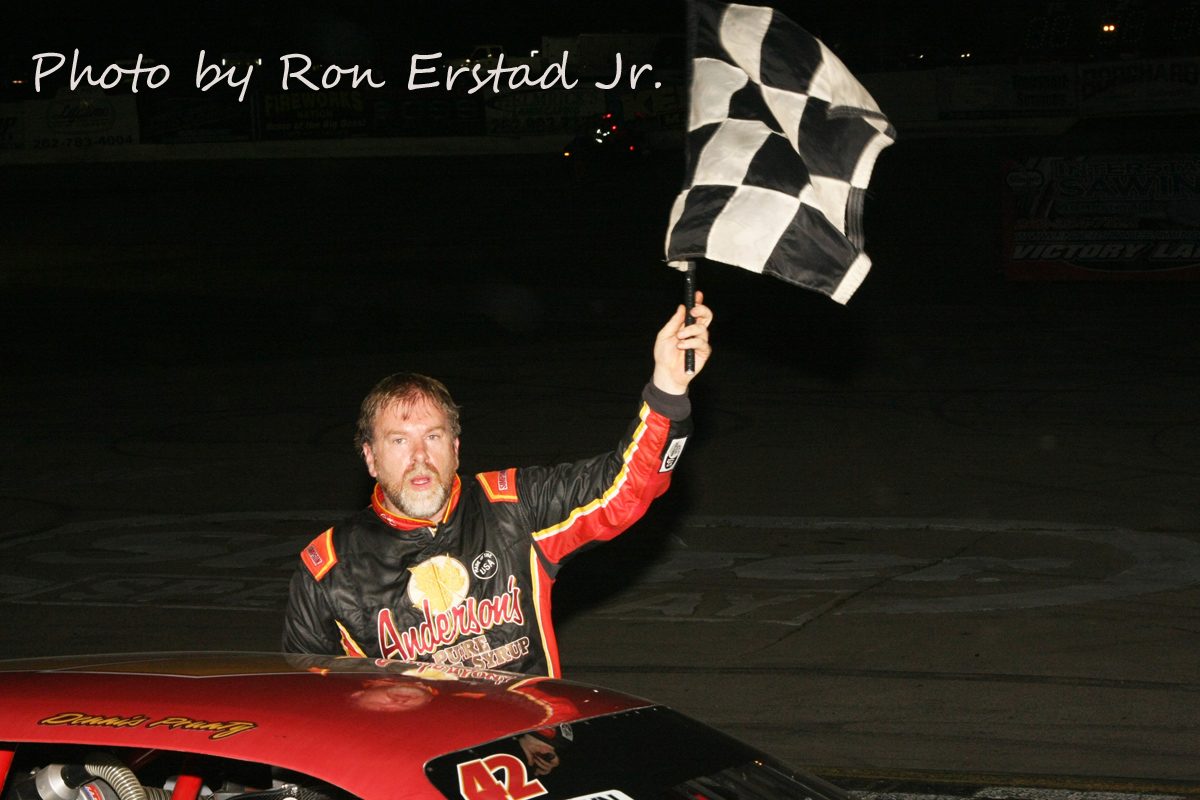 By Dan Margetta and Brian Schmitt
Slinger, Wis., May 27—Dennis Prunty turned back the challenges of Conrad Morgan and drove to his third super late model feature victory of the season in the Uptown 75 Sunday night at the Slinger Super Speedway.

John DeAngelis Jr. and Conrad Morgan led the field to the green flag with Morgan racing to the early lead as the caution flag flew quickly on lap three for an incident between Tim Lampman and Brad Keith on the backstretch. Both were able to continue for the restart as Morgan and Chris Blawat battled for the top spot before the caution flag waved again on lap seven when Nick Wagner’s car came to rest against the turn three wall. Morgan continued to lead as racing resumed while Dennis Prunty advanced his way to second place by lap 18. Blawat’s car slowed slightly on that same lap and in an attempt to avoid, Brad Mueller and Alex Prunty tangled in the second turn to draw the caution flag. The incident knocked a hole in Mueller’s radiator and he retired from the event as Dennis Prunty lined up alongside leader Conrad Morgan for the restart. Prunty was able to use the outside lane to charge into the lead as racing resumed but Morgan kept him honest kept him in his sights as the final caution flag waved on lap 25 for a spin by DeAngelis in turn four. Prunty was able to maintain the lead as the green flag waved but once again Morgan remained in tow. Morgan pressured Prunty for the lead, moving alongside at one point as the leaders worked lapped traffic. With ten laps to go, Morgan’s car washed wide in turn four, allowing Prunty to pull away out front. Prunty was perfect from there and drove to his third super late model feature victory in four weeks while Morgan had to settle for a strong second place showing. Gary LaMonte finished third while Steve Apel and Chris Blawat rounded out the top five.

Super late model heat race wins were recorded by Rich Loch, Alex Prunty, and Chris Blawat while Brad Mueller was the fastest qualifier with a lap of 11.24 seconds.

Jakob Hassler led the opening laps before Bryan Holtz took over the top spot on lap five. A caution flag on lap six for a tangle between Al Stippich and Jakob Hassler and on the restart Holtz led over Shaun Scheel, R.J. Braun, and Jordan DeVoy. Holtz continued to lead over Scheel at the midway point while DeVoy worked his way around Braun and into third. Braun’s car looped around on lap 26 to draw a caution flag and on the restart, Scheel grabbed the lead from the inside lane. A spin by Cole Thomas in turn four on lap 37 set up a three lap dash for the finish with DeVoy using the lane choice cone to move alongside Scheel on the outside of the front row while Holtz chose to line up on the inside right behind Scheel. Over the final three laps, Scheel was able to hold off DeVoy and drive to the victory.while Holtz finished third. Jack Stern and Jon Reynolds Jr. rounded out the top five.
Nick Roehl and Brian Holtz each won a late model heat race and Jordan DeVoy was the fastest qualifier at 12.061 seconds.

Jacob Schraufnagel took the lead on lap six of the 30-lap Area Sportsman feature and drove to the victory over Adam Bleskan and Paul Wagner. David Borntreger and Joe Shelby finished fourth and fifth respectively. Randy Ruth and Jake Schraufnagel were the winners of the Area Sportsman heat races and Jay Kalbus was the fastest qualifier with a lap of 12.753 seconds.

Scott Goetzke took the lead on lap four of the Figure 8 race and went on to capture the victory over Rick Bruskiewicz and Willy VanCamp. 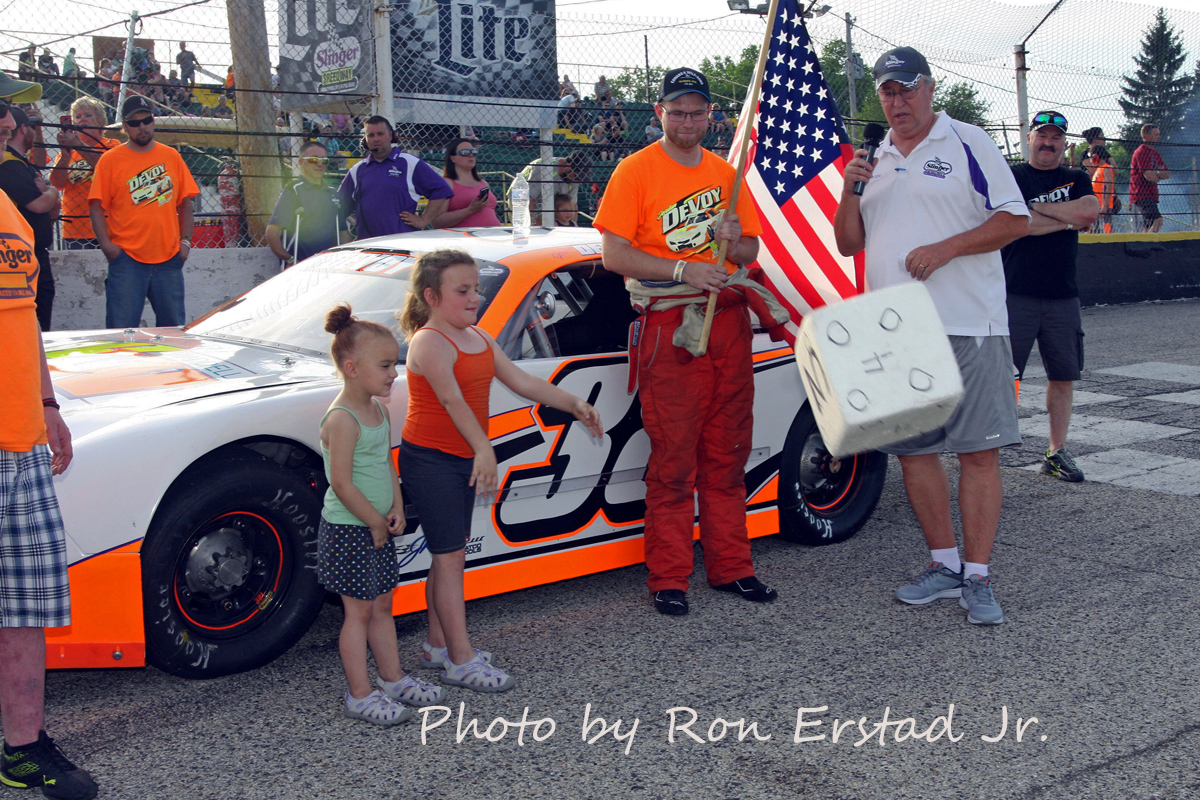 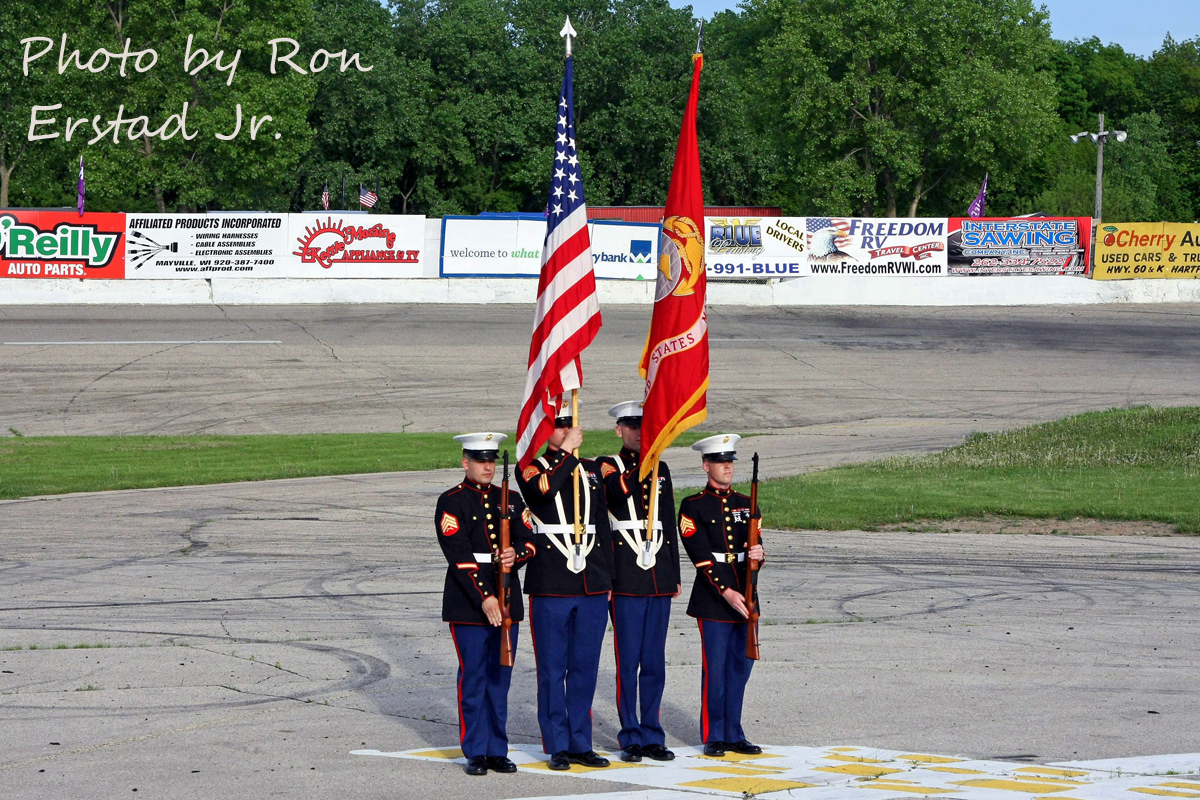 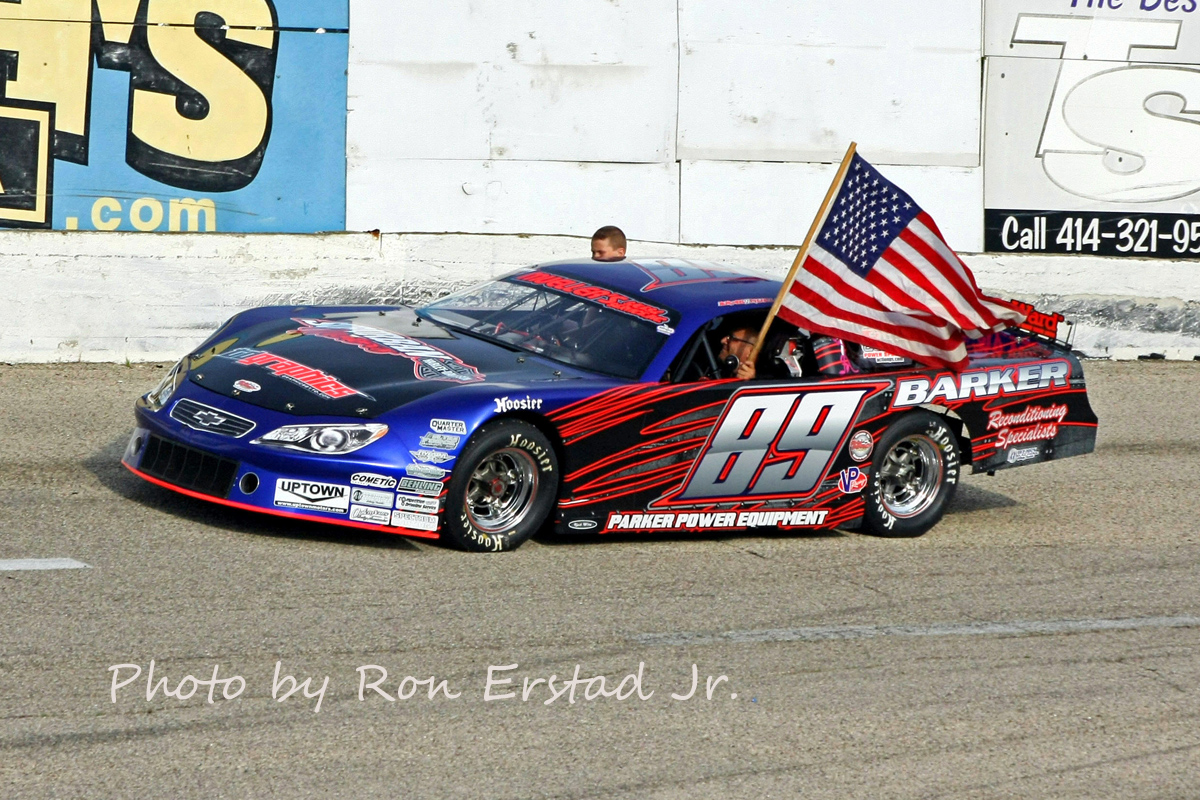 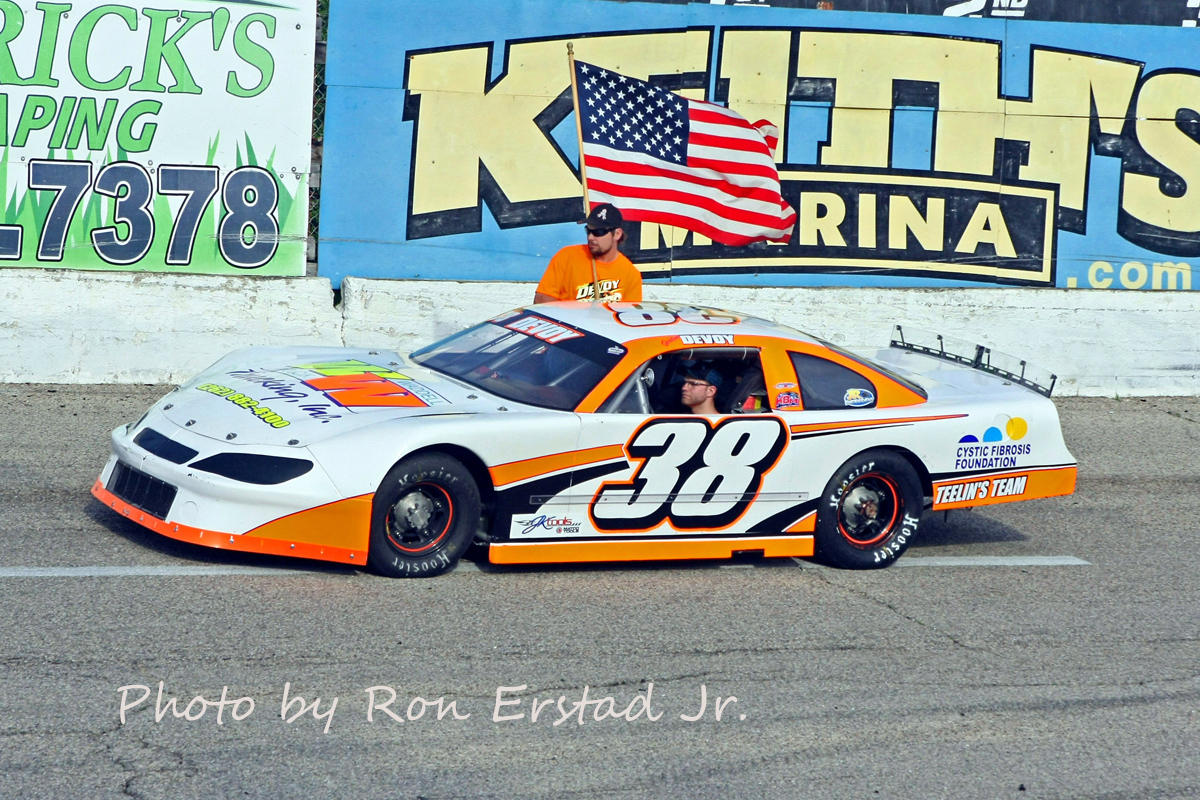 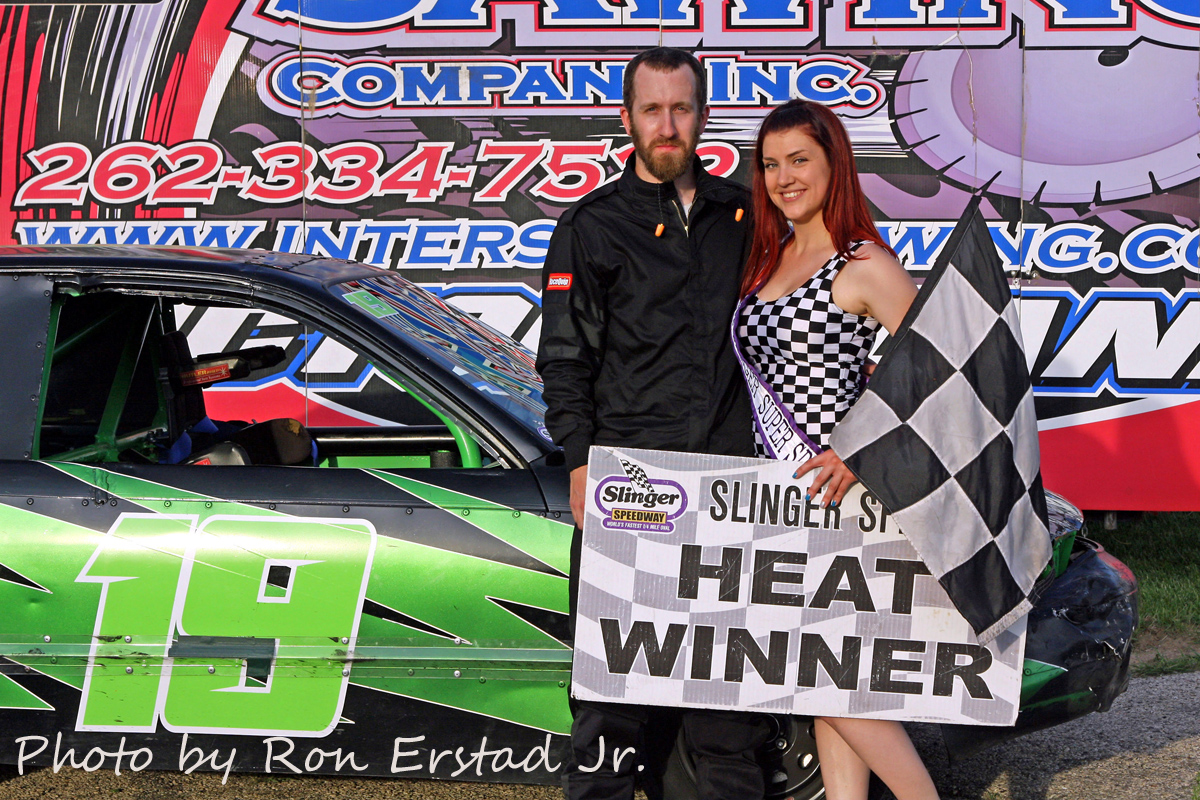 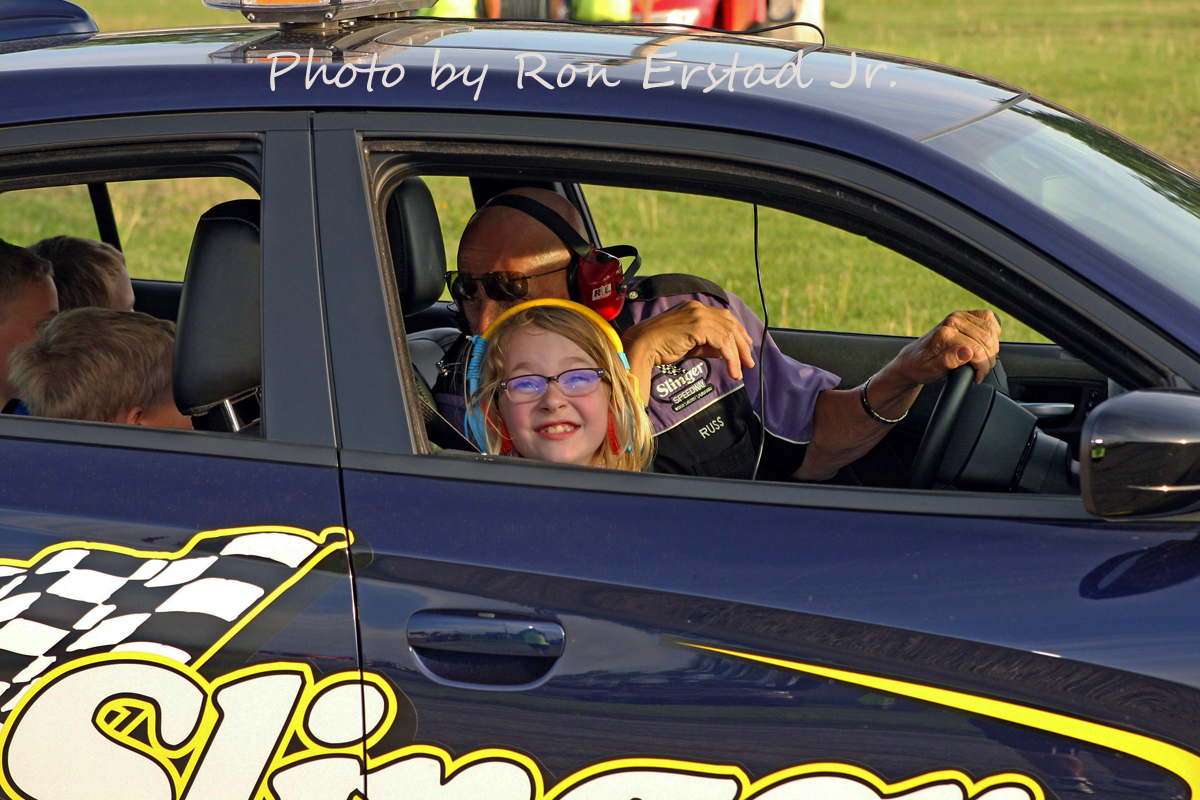 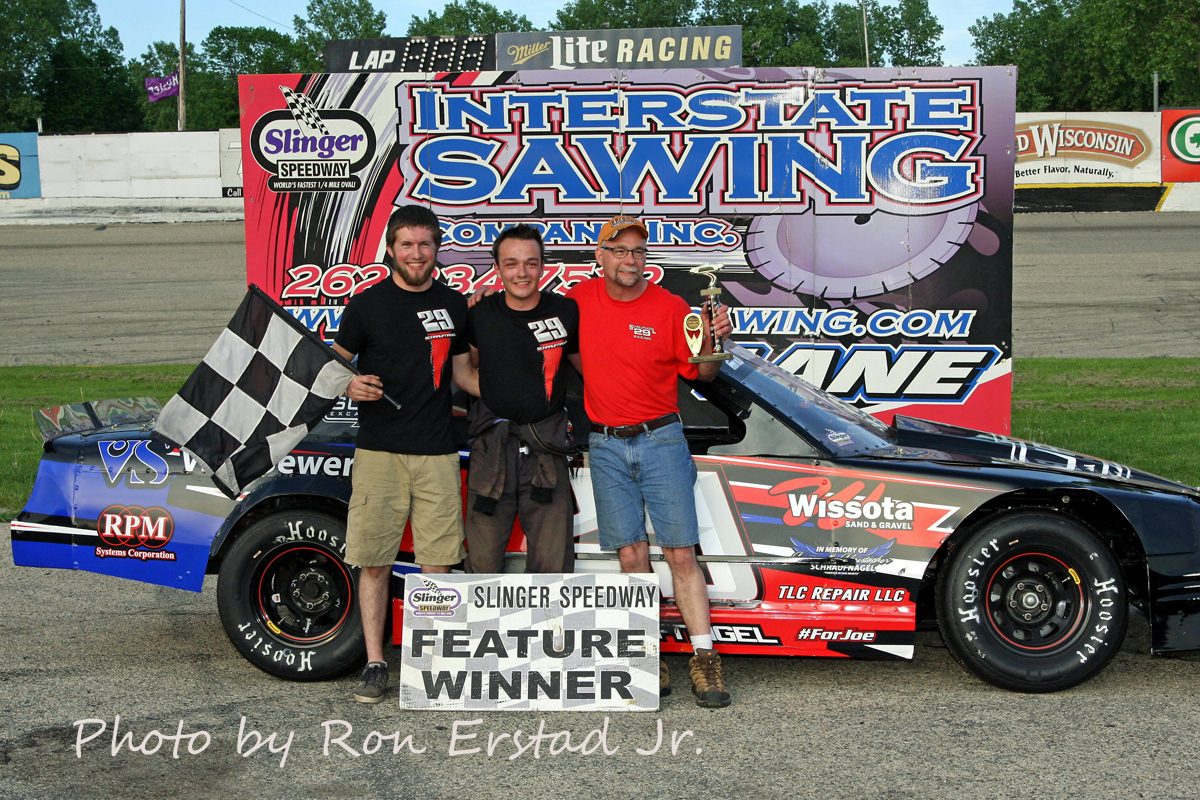 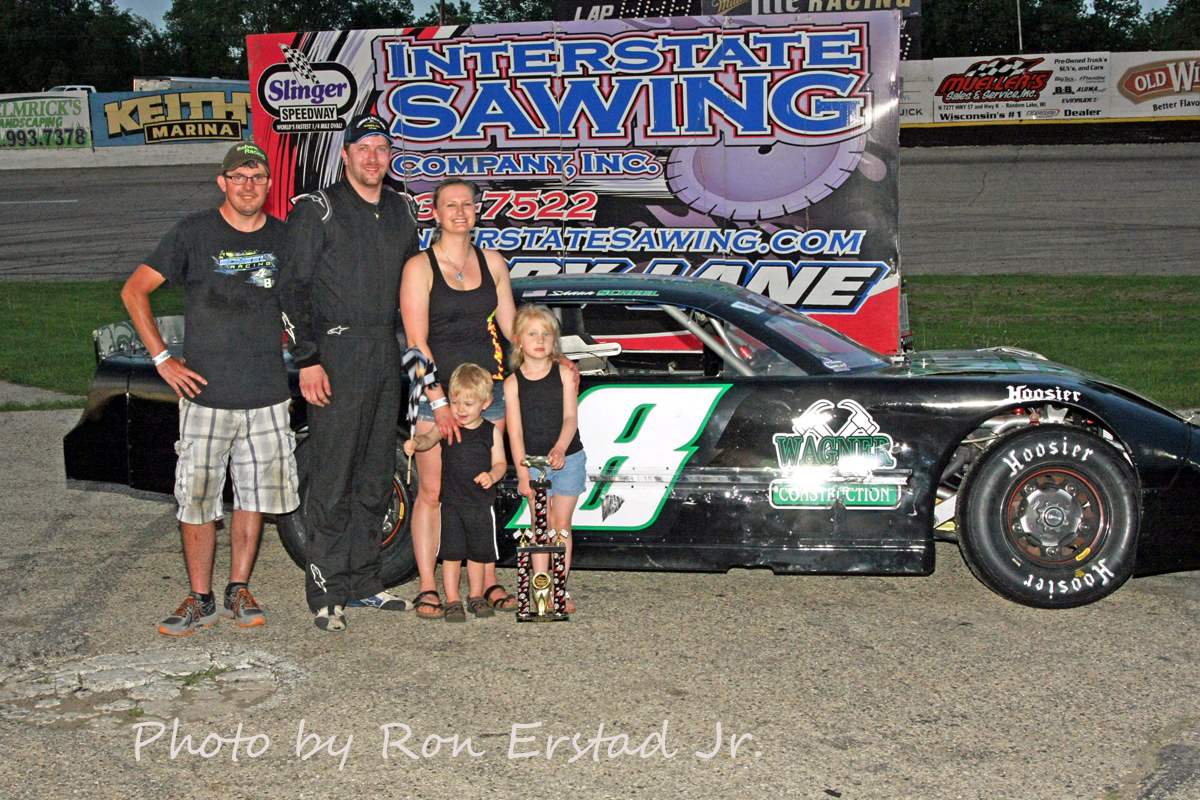 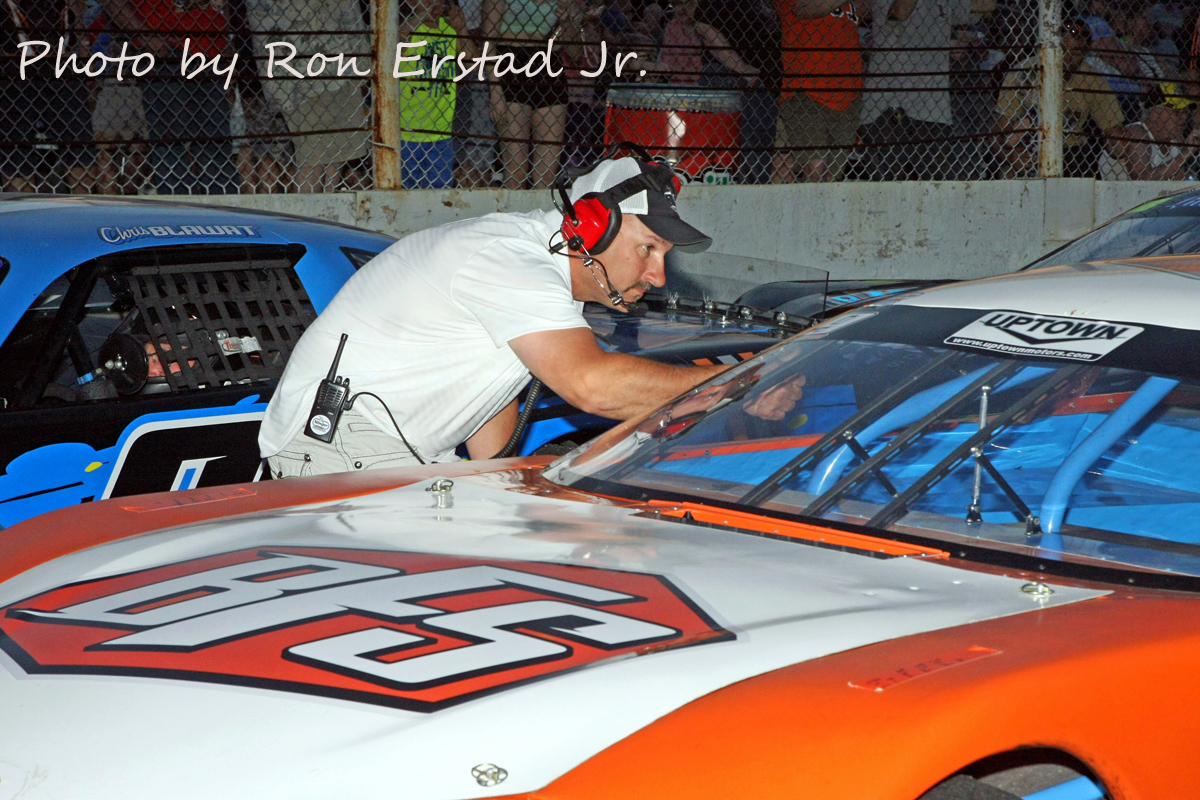 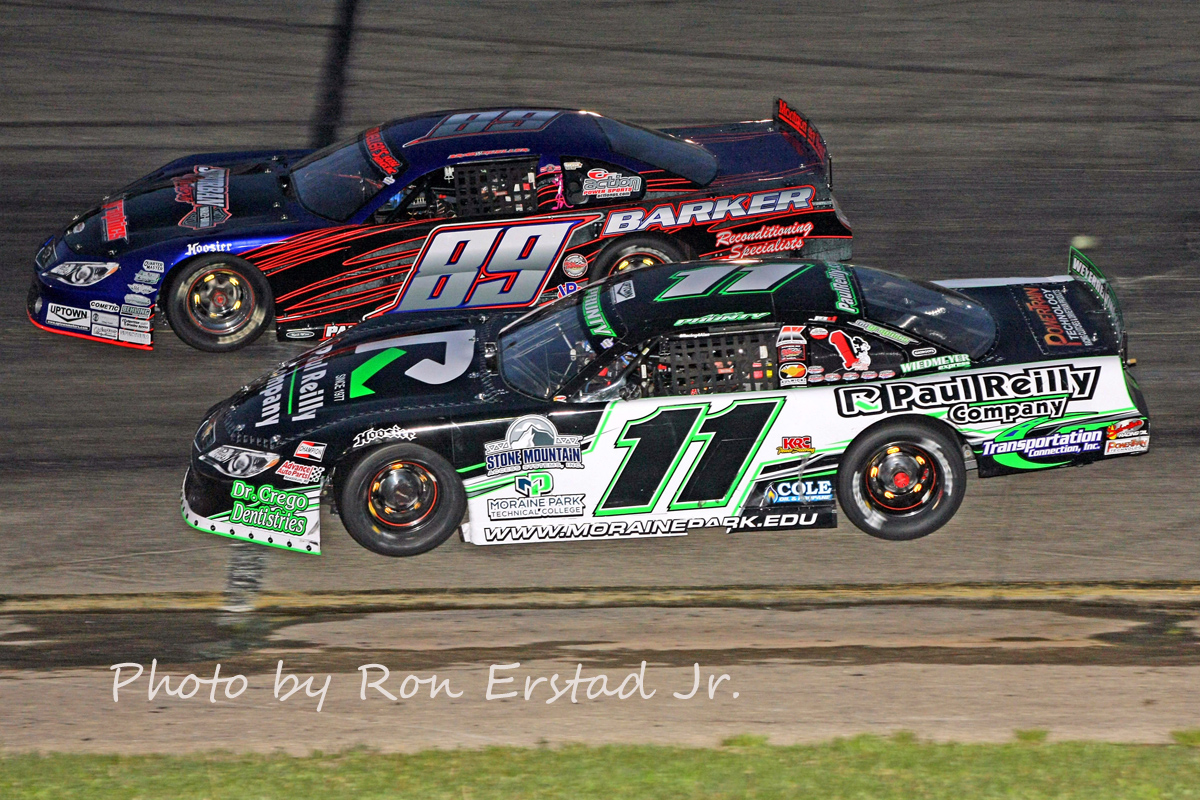 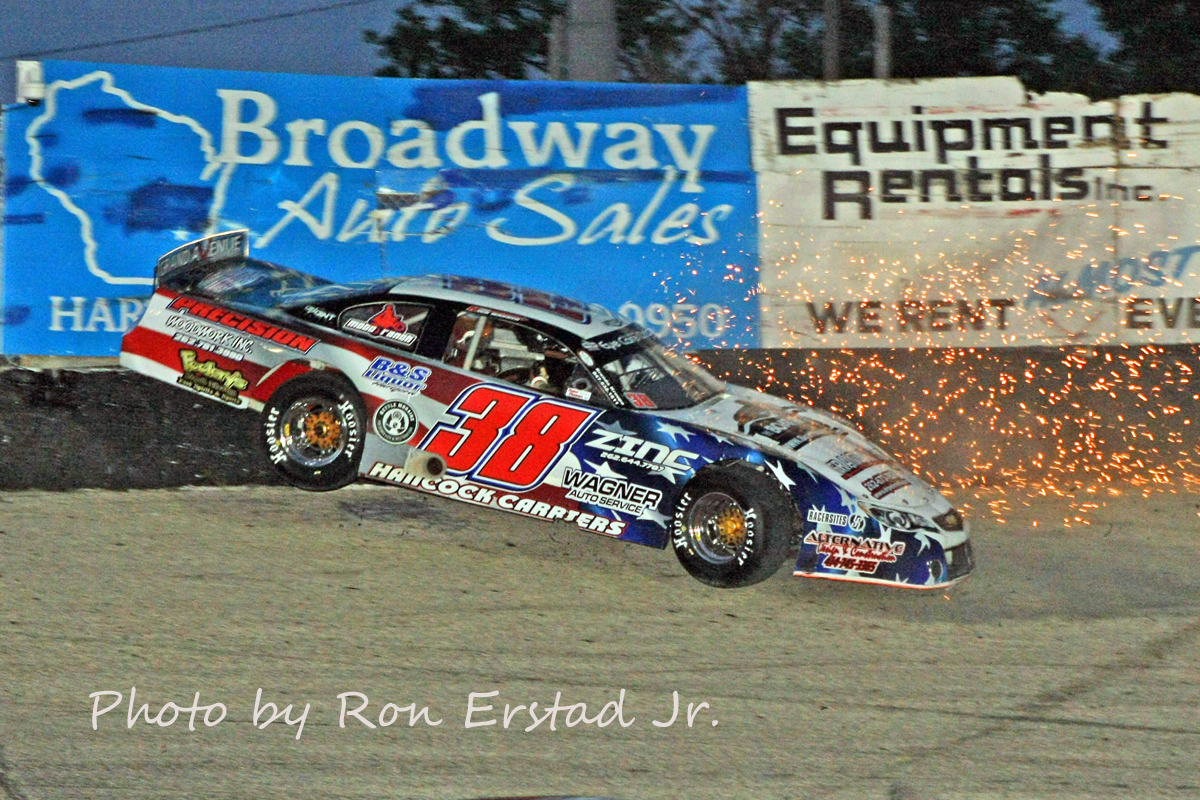 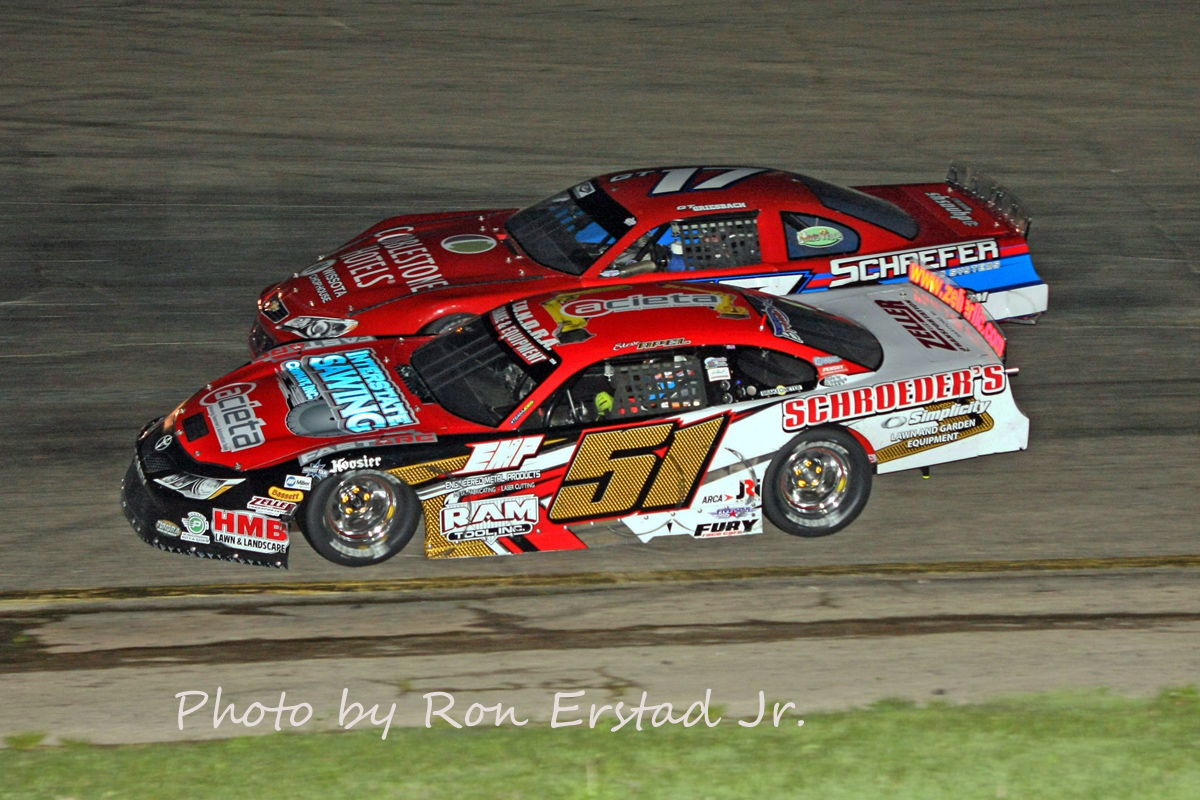 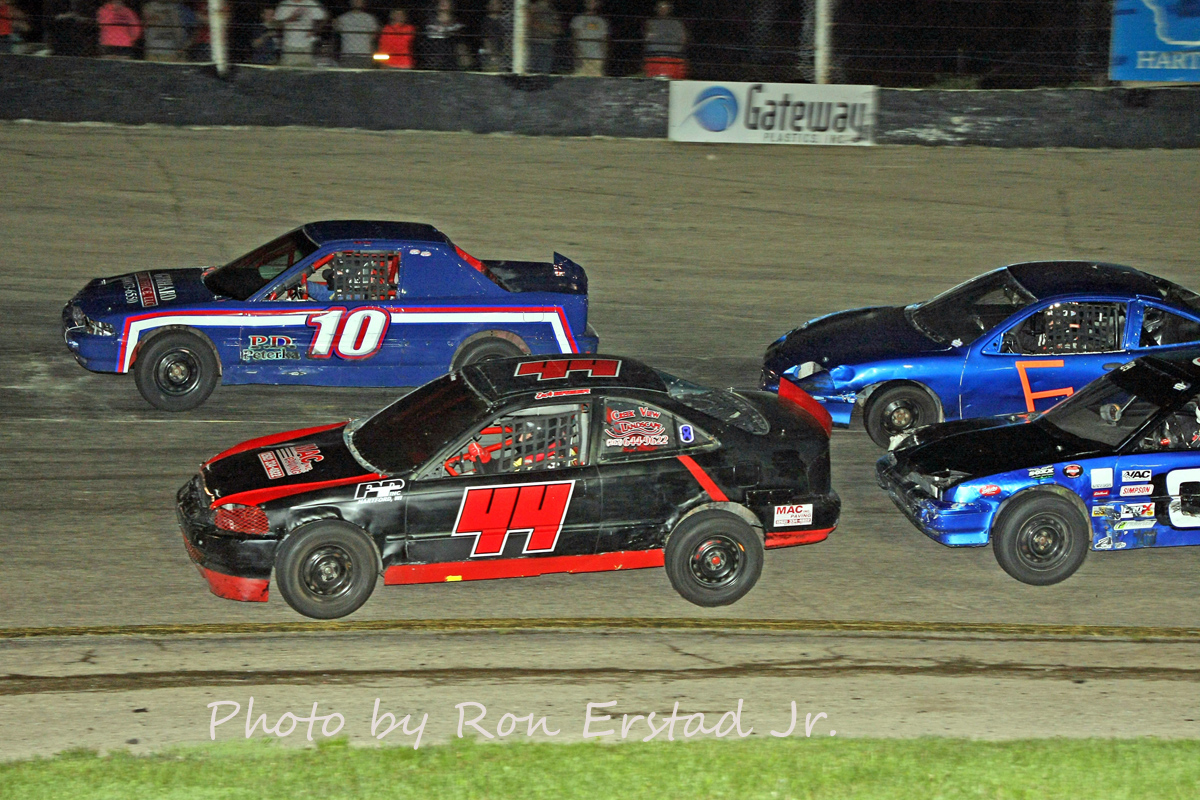 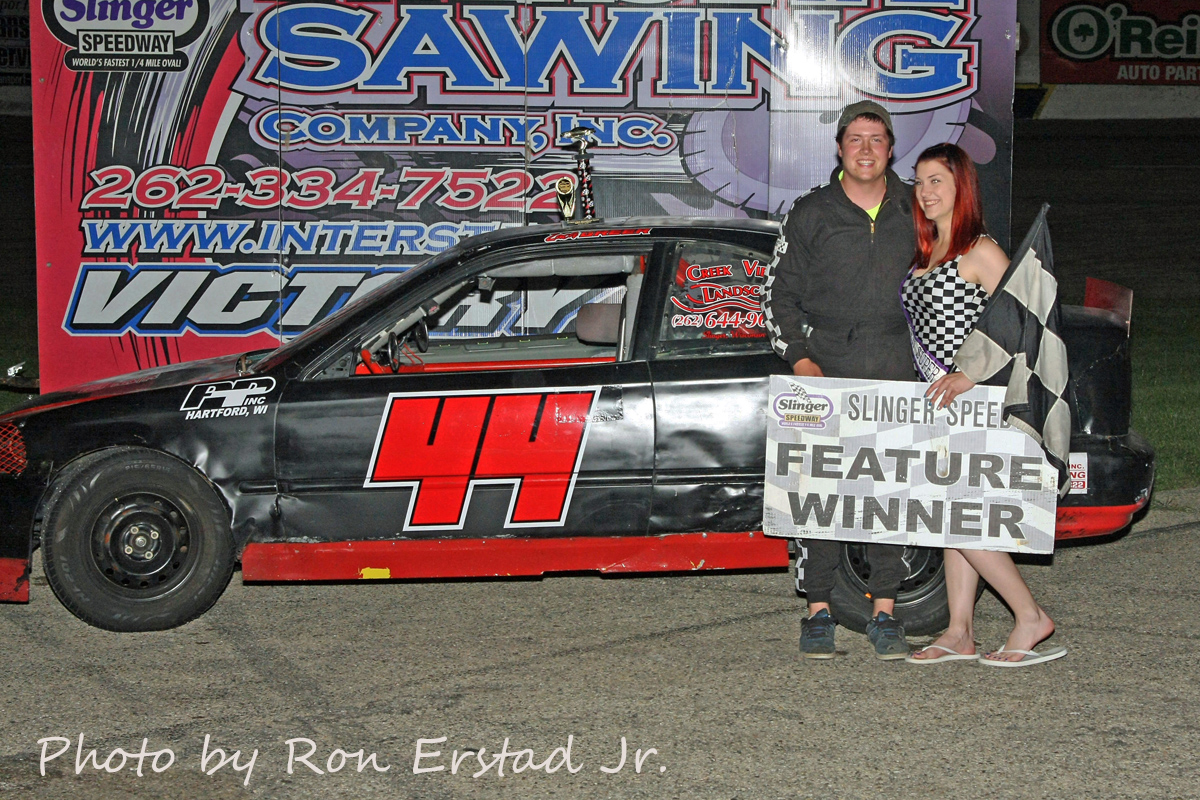