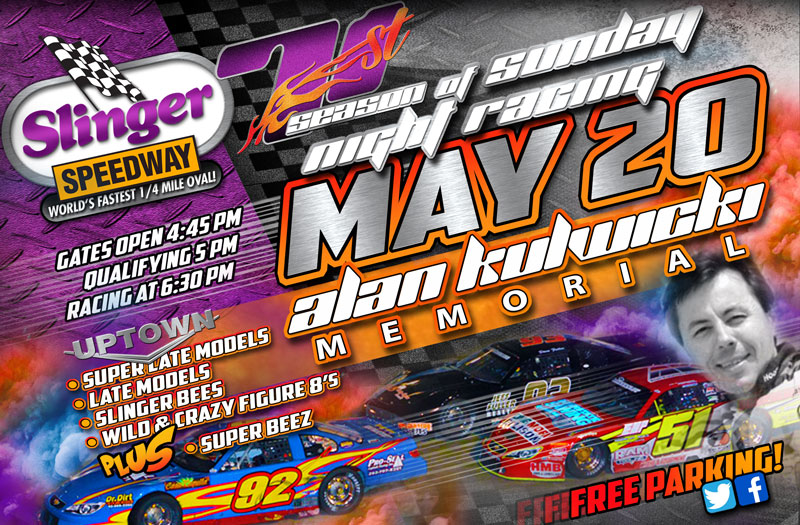 (Slinger, WI) After a scheduled week off, racing returns to the Slinger Super Speedway, Sunday evening, May 20th. The Uptown super late models will headline with the 26th annual version of the Alan Kulwicki Memorial. They’ll be joined by late models, super beez, Slinger bees and figure 8’s as the high banked quarter mile oval begins its evening race tradition after opening the 2018 campaign with a pair of afternoon affairs.

The event honors the 1992 NASCAR Cup Champion and former Slinger Super Speedway track champion who perished in a plane crash in 1993. Matt Kenseth was a 21-year-old regional hot shoe when he scored the first Kulwicki Memorial race, at Slinger, in 1993. Kenseth’s win in the Kulwicki Memorial was part of a racing resume that would help lead the Wisconsin racer to the upper reaches of NASCAR and ultimately a Cup Series championship of his own.

In the 2017 version of the Kulwicki Memorial, Conrad Morgan made history by becoming the oldest driver (69-years-old) to ever score a super late model win at the high-banked quarter-mile oval.

Bookmarked between Kenseth and Morgan, then up and coming racers Andrew Morrissey; Al Schill, Jr; Jimmy Watson; Brad Mueller and Jeremy Lepak have scored wins in the Kulwicki Memorial as have veteran track champions Tony Strupp; Al Schill and Lowell Bennett. In addition, Cindy Peterson became the first woman to win a super late model main event at Slinger with her Kulwicki Memorial triumph in 1999.

All of the previous Kulwicki Memorial winners will be invited back to Slinger Speedway, for a special pre-race ceremony.

Gates open Sunday evening at 4:45 p.m. with qualifying at 5:00. Opening ceremonies are set for 6:30 with racing to follow.

There are select advertising and sponsorship opportunities as well as company and group outings available for the 2018 season. For more information, call: 262-370-0440, slingerspeedway1@aol.com, or visit our web site at: www.slingersuperspeedway.com.