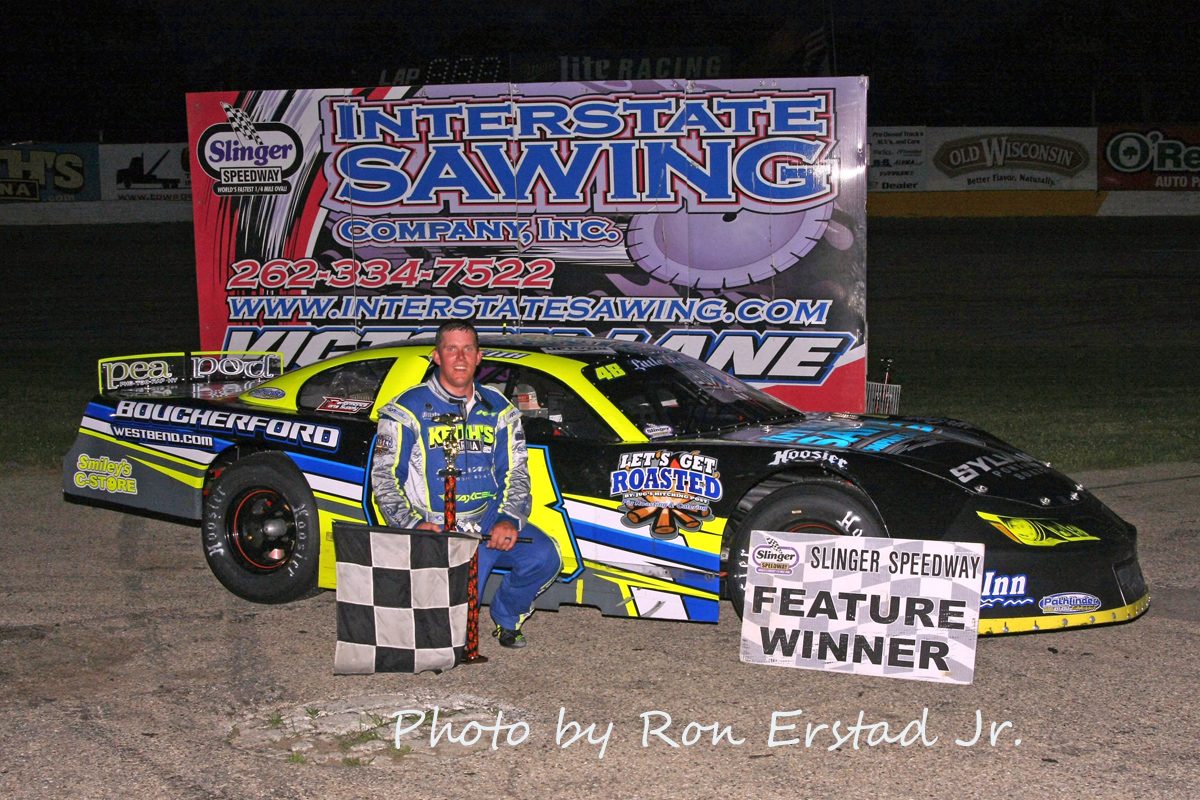 Slinger, Wis., June 17—It had been a long time coming but Brad Keith finally found himself in victory lane following a super late model feature as he survived a torrid late race battle to score his first career win in the PMF Landscape Supply Scout Night 60 Sunday evening at the Slinger Super Speedway.

“It was pretty exciting,” Keith told the crowd from the victory deck, “There has been nights when we left here wondering if we were ever going to get the first one. We’ve won in the super late at La Crosse but we have never won here and you get to thinking at some point your luck has to change but you just don’t know when.”

“Now going forward the car has been fast in practice and we’ve been qualifying good and I think we’ll have a good car for the Nationals (July 10th),” Keith continued, “This probably won’t sink in until tomorrow when I wake up with a big headache.”

Travis Dassow charged to the lead at the start from his pole position starting spot while Conrad Morgan tucked in behind him in second. Nick Wagner and Grant Griesbach raced side by side over third while Keith, Dennis Prunty, Gary LaMonte, and Alex Prunty all followed in formation behind. With Dassow and Morgan pulling away slightly out front, Griesbach and Keith caught a break on lap 12 when Wagner’s car kicked loose momentarily from the inside allowing those on the high side to scoot by while the inside lane checked up. Dennis Prunty was directly behind Wagner and he quickly darted to the outside right in front of a fast closing Alex Prunty who was forced to lift and as he attempted to move back inside, contact with the car of Chris Blawat sent him spinning off turn two to draw the caution flag.

Dassow chose the inside for the restart and Morgan was able to hang with him on the inside as racing resumed. Dassow and Morgan spent many laps door to door for the lead with Brad Keith directly behind Dassow waiting for an opening. After several lap of aggressively battling for the lead, Dassow was able to clear Morgan but in the process opened up the door on the inside for Keith and he immediately moved alongside Dassow to take the lead on lap 19. Gary Lamonte and Dennis Prunty also used the inside lane to work their way around Morgan and Dassow to claim second and third place respectively as Keith moved out ahead. While working lapped traffic, Dennis Prunty was able to close on LaMonte for second and was able to loosen him up enough to take the spot just before the caution flag waved again on lap 56 for a tangle between Dassow and Wagner in turn four. Because a lap had not been fully completed since Prunty’s move, LaMonte retained second place for the final four lap shootout for the victory.

Keith chose the outside for the restart and LaMonte fired it into turn one from the inside as the green flag waved and although the leaders made slight contact in the corner, Keith was able to come away with the lead as they exited turn two. Keith, LaMonte, and Dennis Prunty all were tightly bunched as the white flag was displayed with Keith maintaining the outside while LaMonte held the inside and Prunty attempted to fill the outside groove alongside LaMonte. As they exited turn two, contact between LaMonte and Prunty send Prunty scraping along the backstretch wall and he tank slapped the concrete in turn three as Keith and LaMonte charged toward the checkered flag for the win. Keith was able to fend off LaMonte to score the victory while Conrad Morgan and Grant Griesbach finished third and fourth respectively. John DeAngelis crossed the stripe in fifth followed by Justin Mondeik in sixth and Ryan DeStefano in seventh. Rob Braun, Alex Prunty , and Chris Blawat rounded out the top ten finishers.

Dennis Prunty led the opening laps as Egan, Shaun Scheel, and Al Stippich raced for position behind him. With Prunty comfortably out front, the caution flag waved on lap 15 for an incident between Jakob Hassler and R.J. Braun in turn two. On the restart, Prunty chose the outside and Egan lined up on the inside groove and the two raced side by side into turn one. Egan held the advantage from the inside and he was able to muscle his way into the lead by the time the leaders exited turn two. Egan could not be caught from their and he drove to the victory over Prunty who held off Shaun Scheel for second. Al Stippich finished fourth and Ryan Gutknecht drove from deep in the field to a fifth place finish.

Ryan Gutknecht and Al Stippich each won a late model heat race and Jack Stern was the fastest qualifier with lap of 12.291 seconds.

Rick Schaefer wheeled his new car to the win in the 15-lap Super Beez feature. Dakota Smith led the first three laps before Schaefer charged by for the lead on lap four. Steve Zoromski also moved through the field and he chased Schaefer from second. Although Zoromski was in Schaefer’s mirrors it was not enough to prevent Schaefer from scoring the victory leaving Zoromski to settle for second place. Brandon Tackes finished third while Jayden Buckley and Dakota Smith rounded out the top five. Rick Schaefer also won the Super Beez heat race and Steve Zoromski was the fastest qualifier at 13.943 seconds.

Matt Urban didn’t think he would be able to race earlier in the week as his car needed a lot of work but the efforts of friends and fellow racers resulted in Urban winning the 25-lap Slinger Bee feature. Urban held off a hard charging Brady Held for the victory while Zach Greer finished third just ahead of Joel Held and Brandon Berens. Kevin Lentz won the Slinger Bee semi-feature over J.D. Rudser and Anthony Dorzok. Brian Stanczyk and Scott Schmies were fourth and fifth respectively. Slinger Bee heat races were won by Brady Held and Al Strobel while Dale Kiley-Schaefer was the fastest qualifier at 15.266 seconds.

Rick Bruskiewicz held off Scott Goetzke in a thrilling finish to win the Figure 8 race and close out the evening. 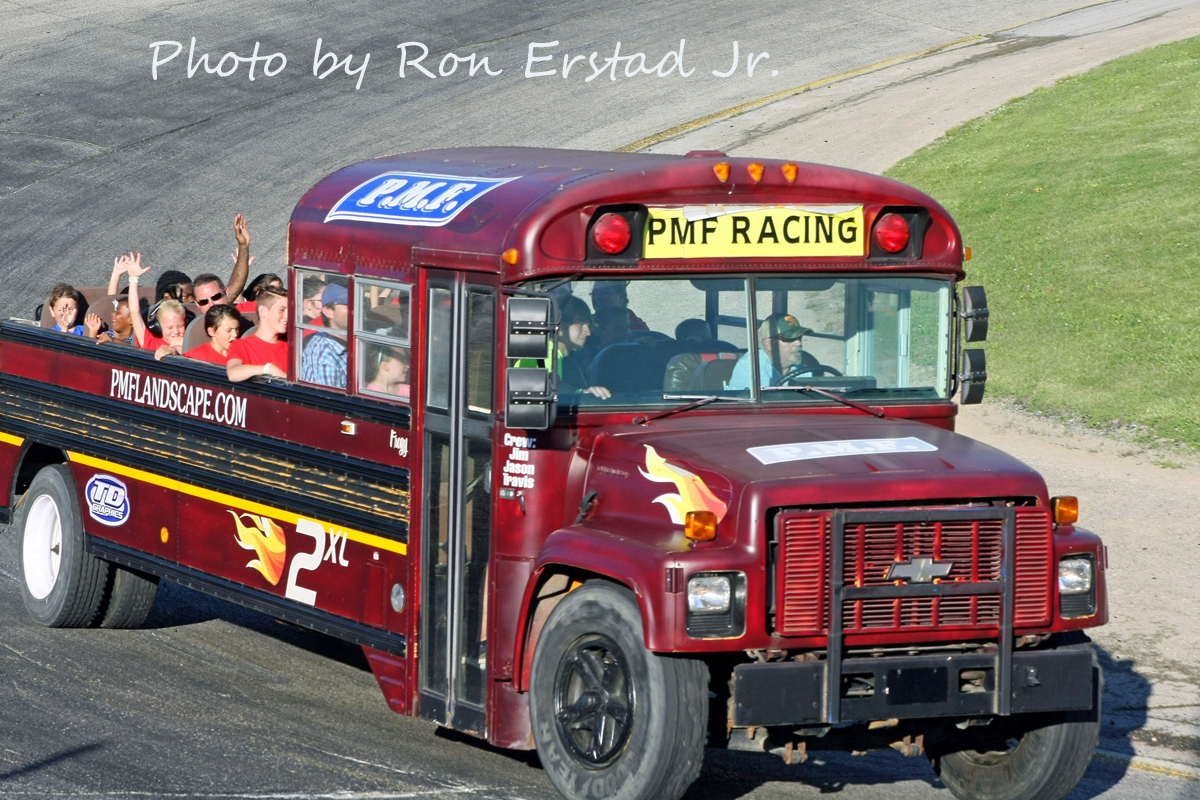 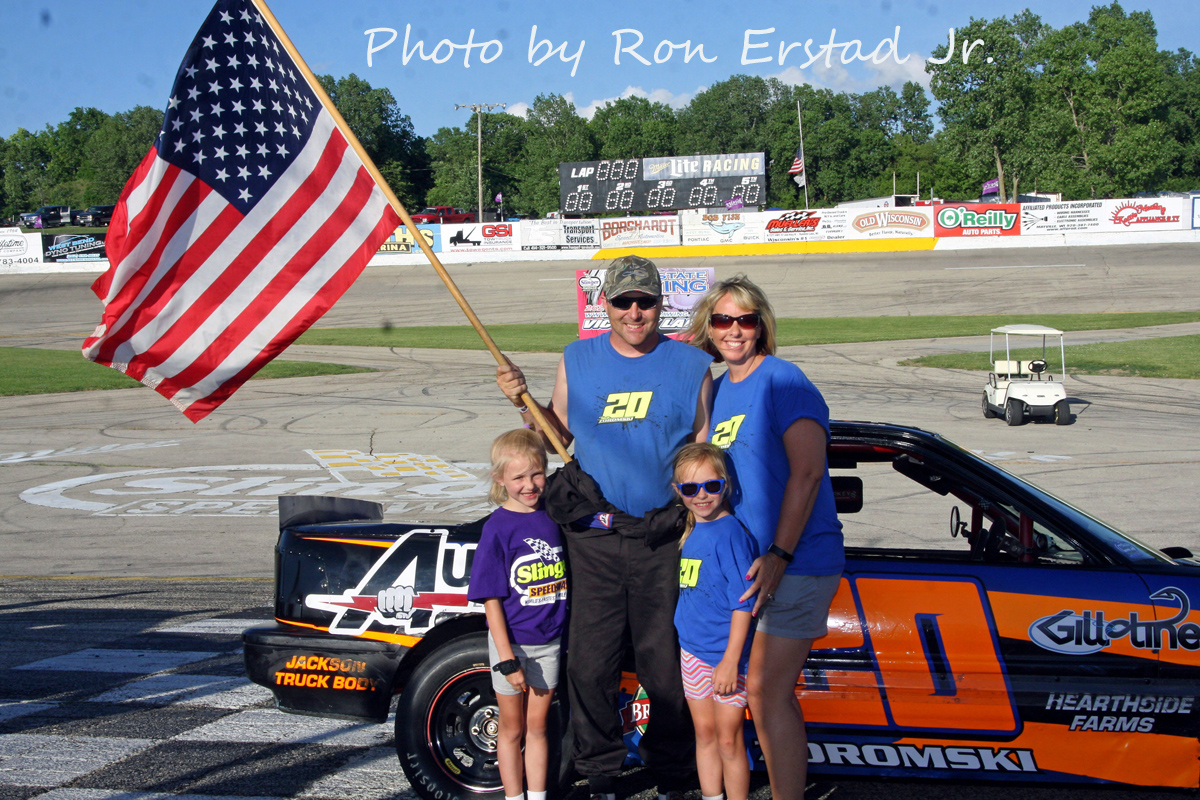 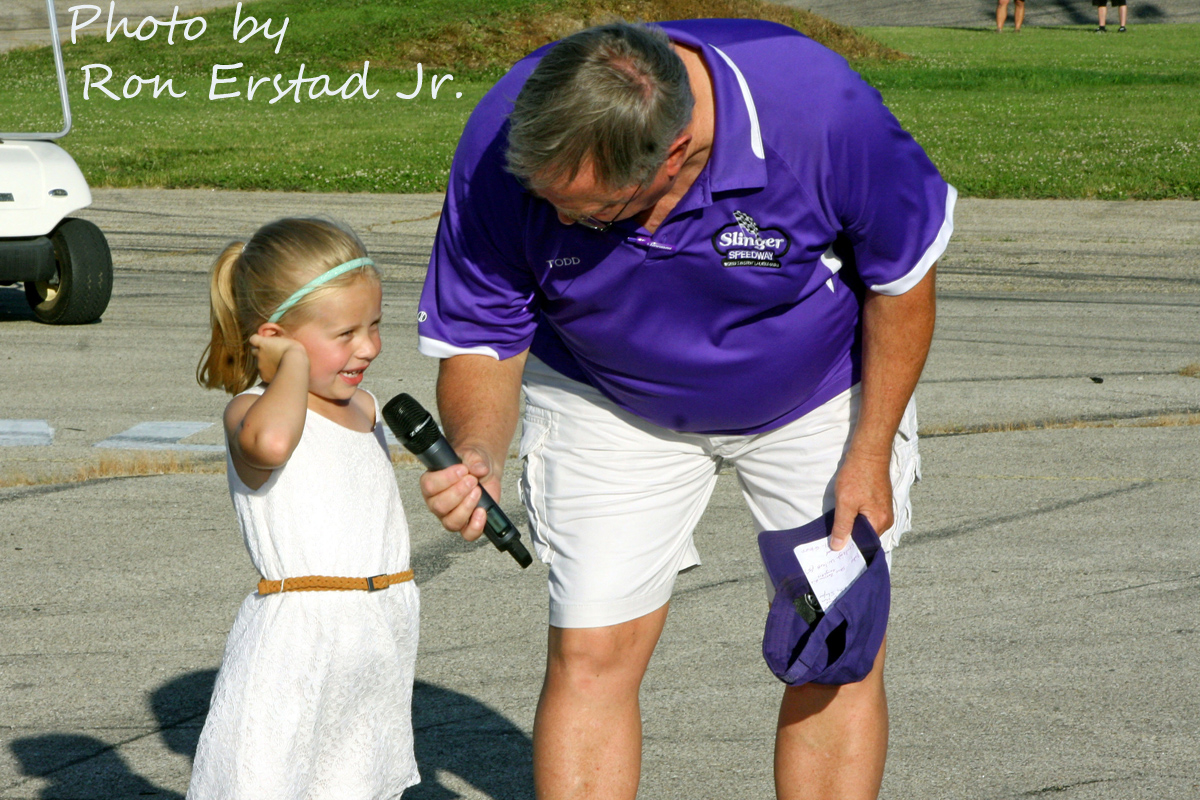 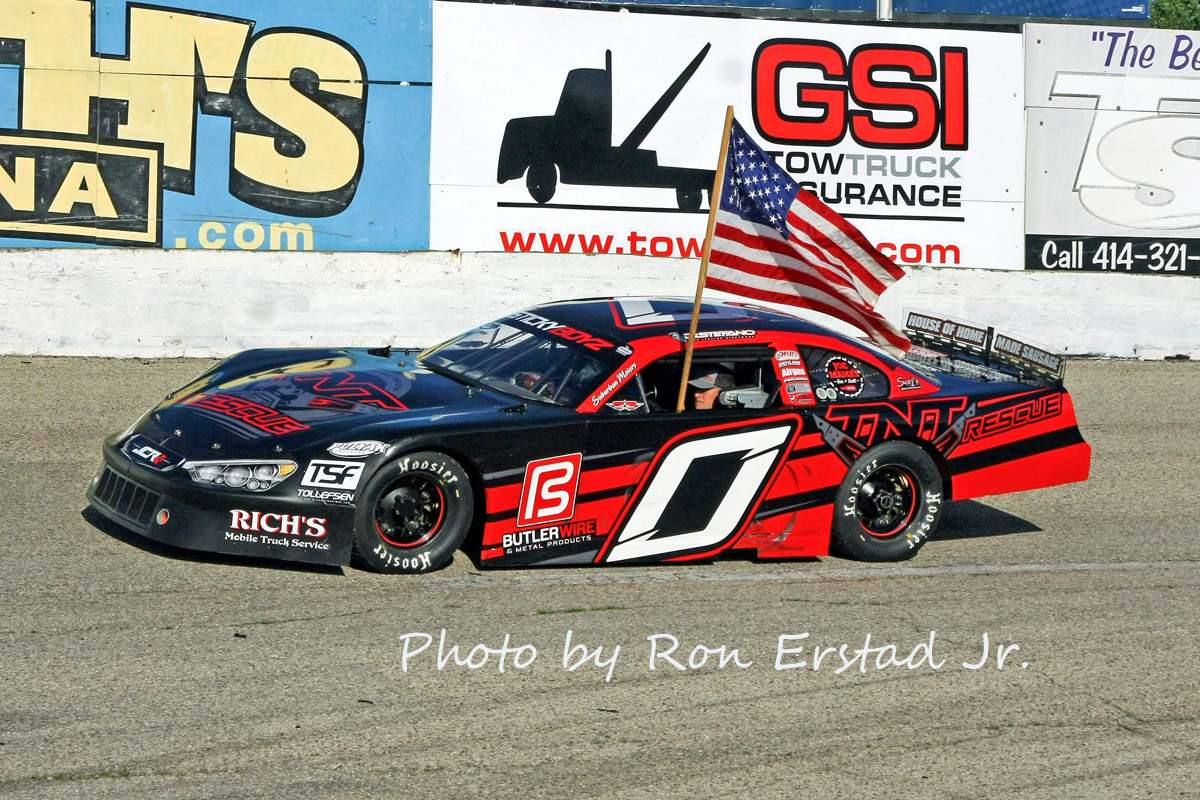 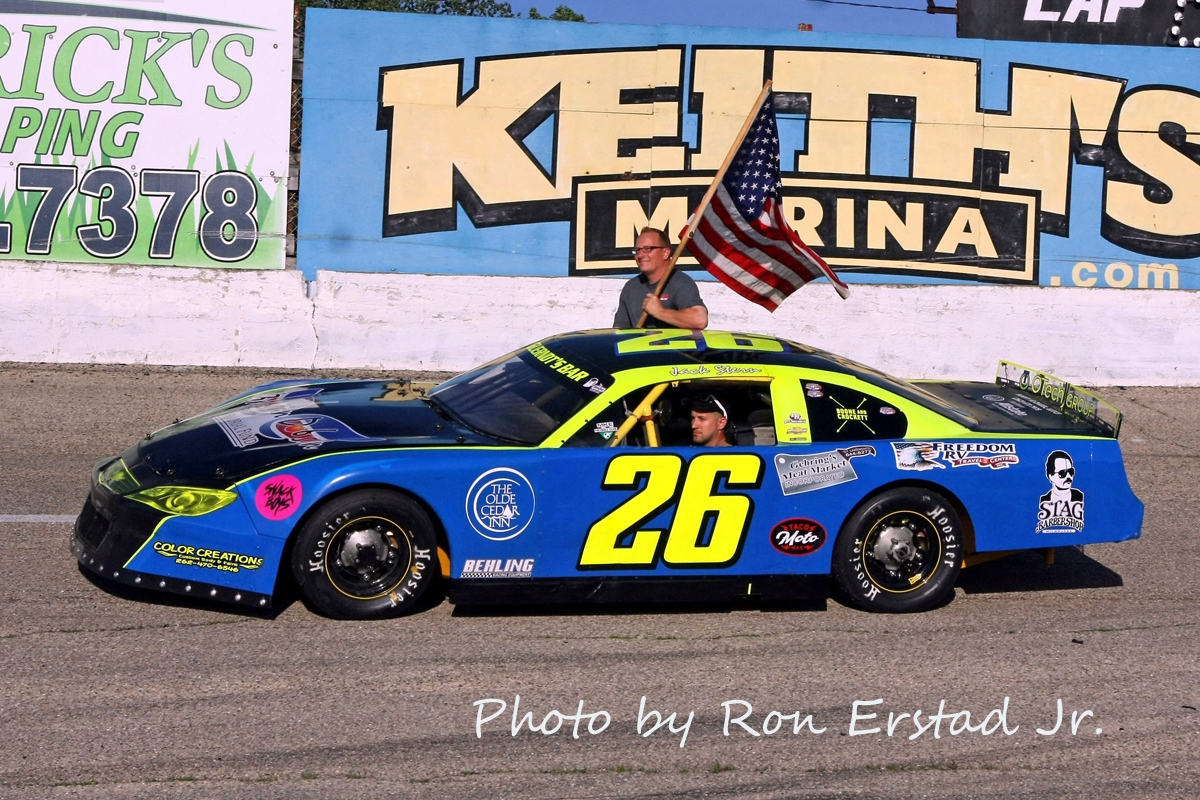 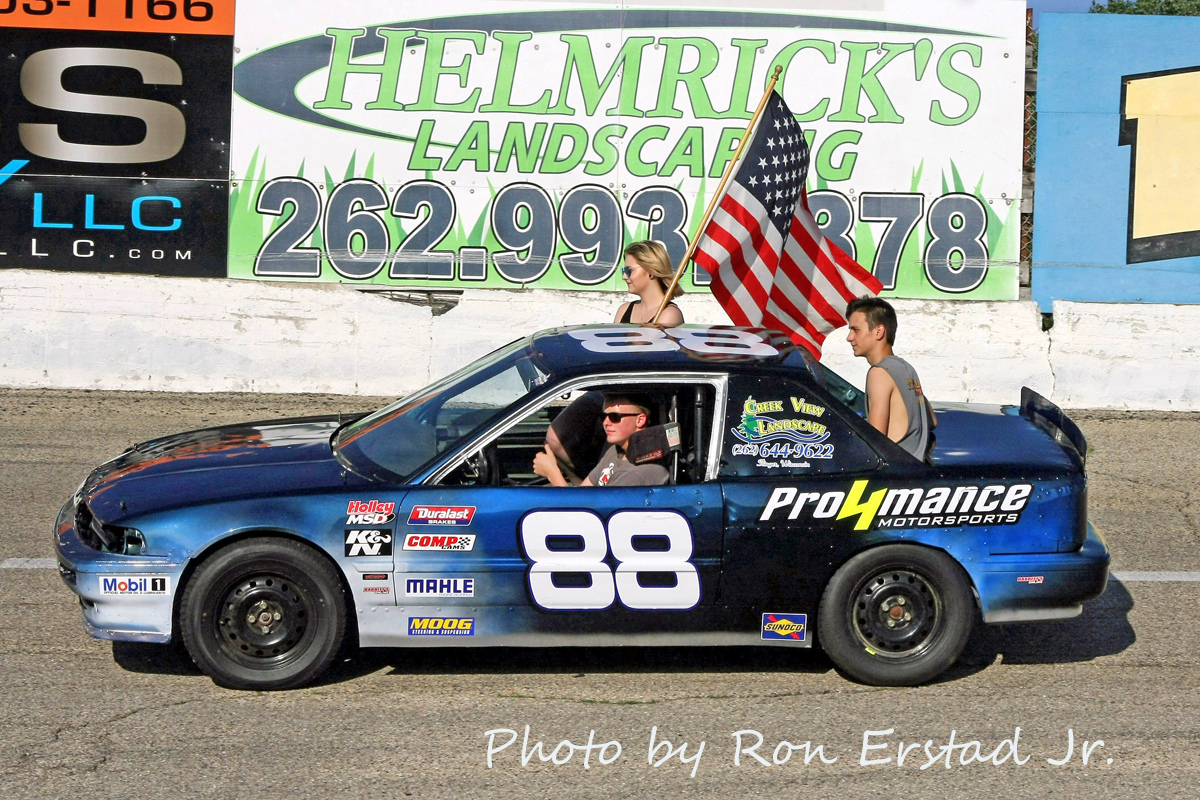 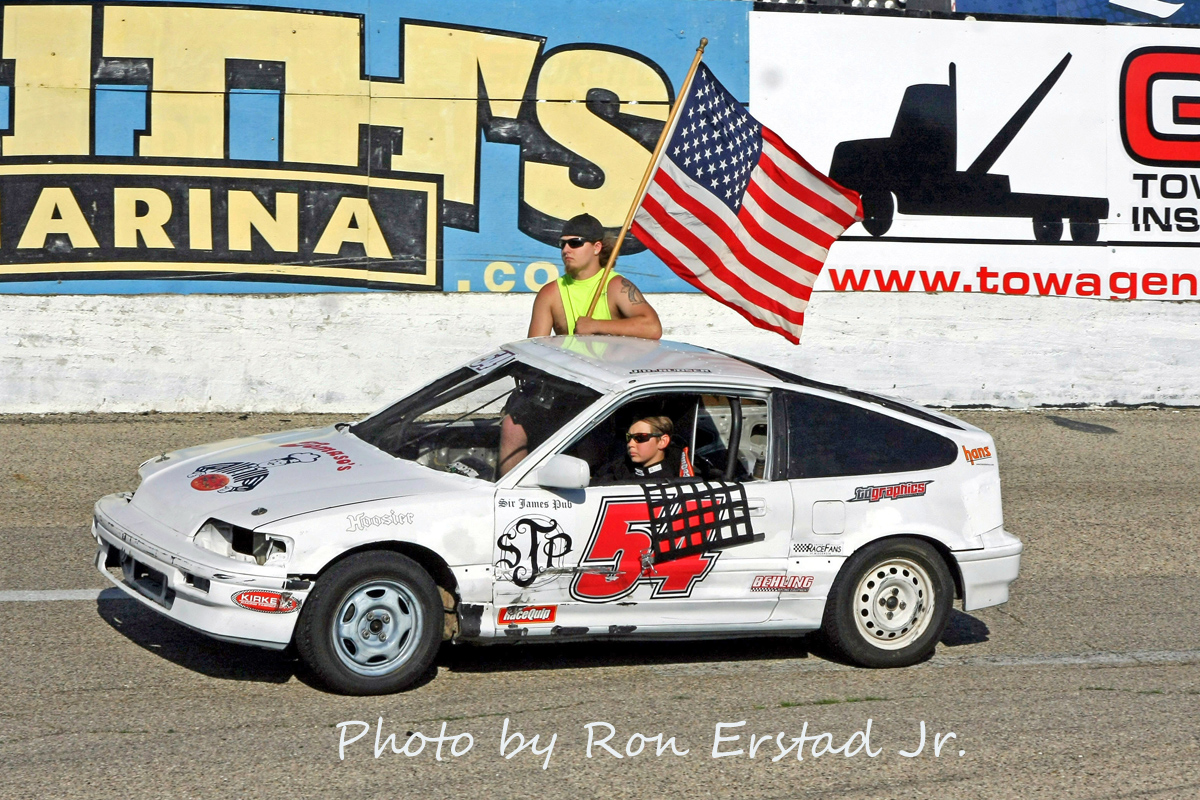 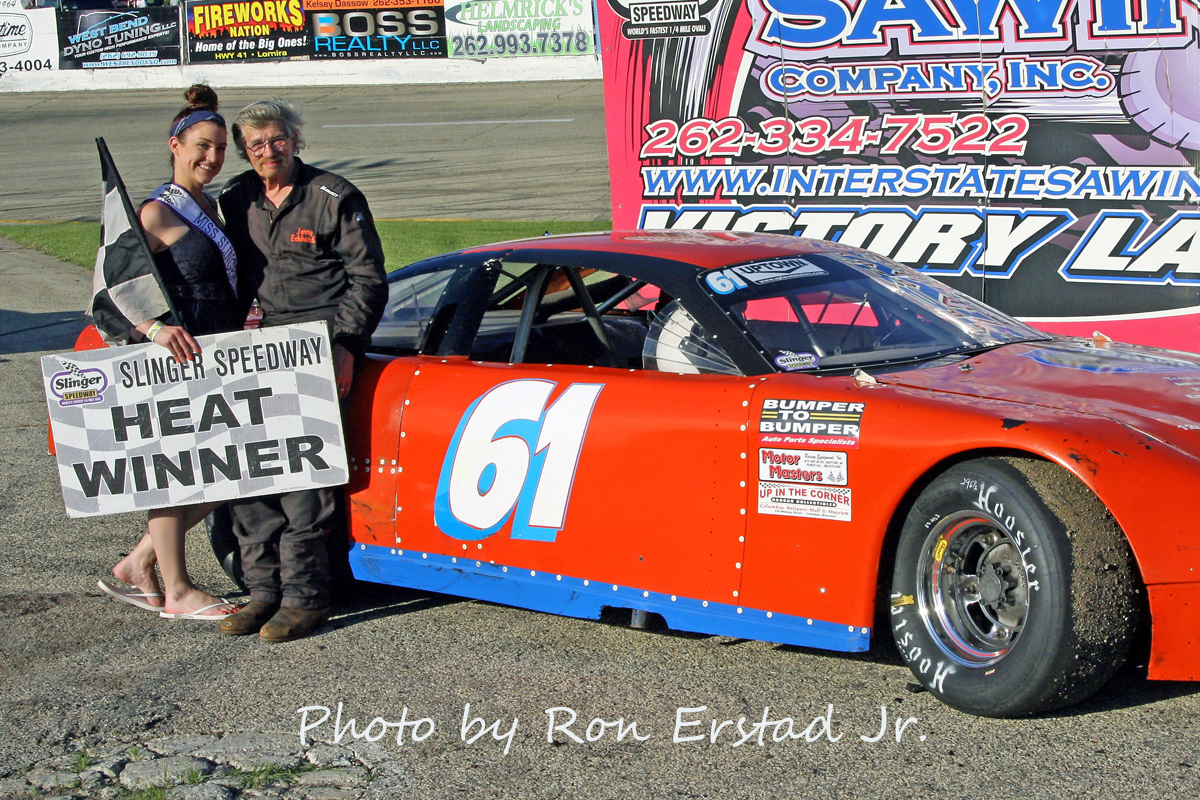 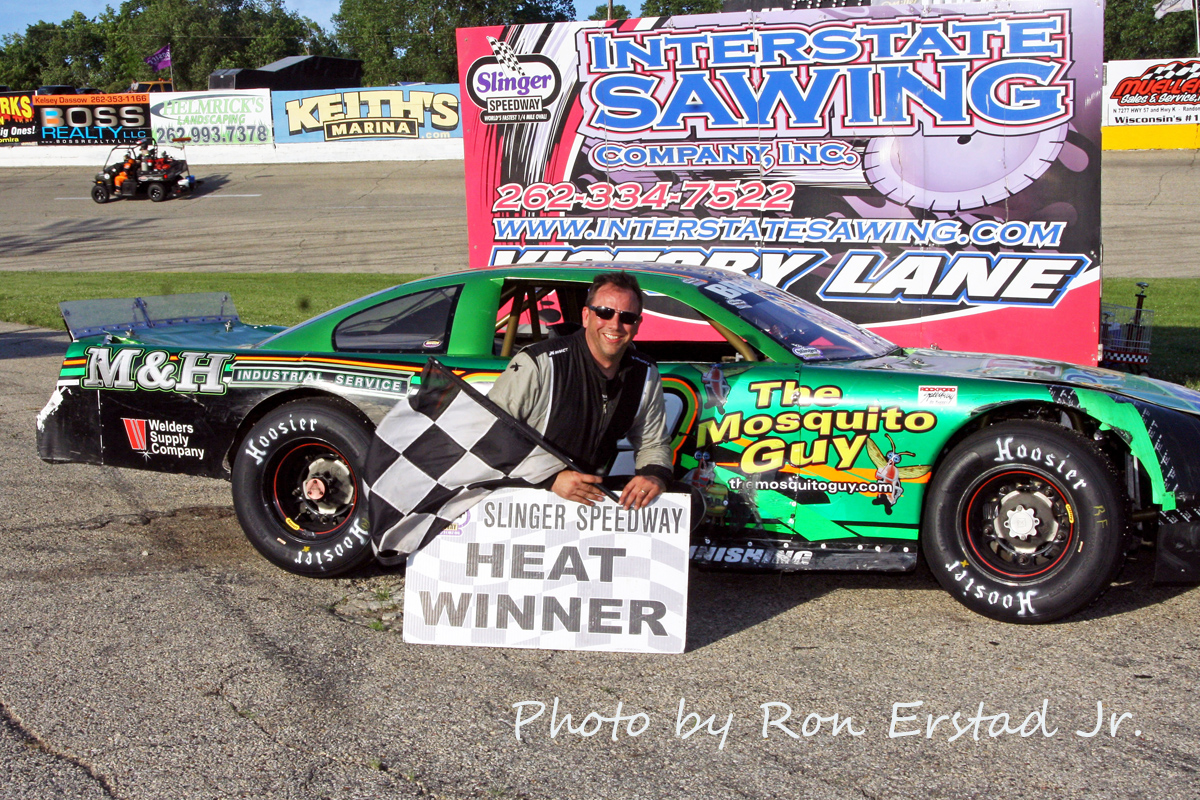 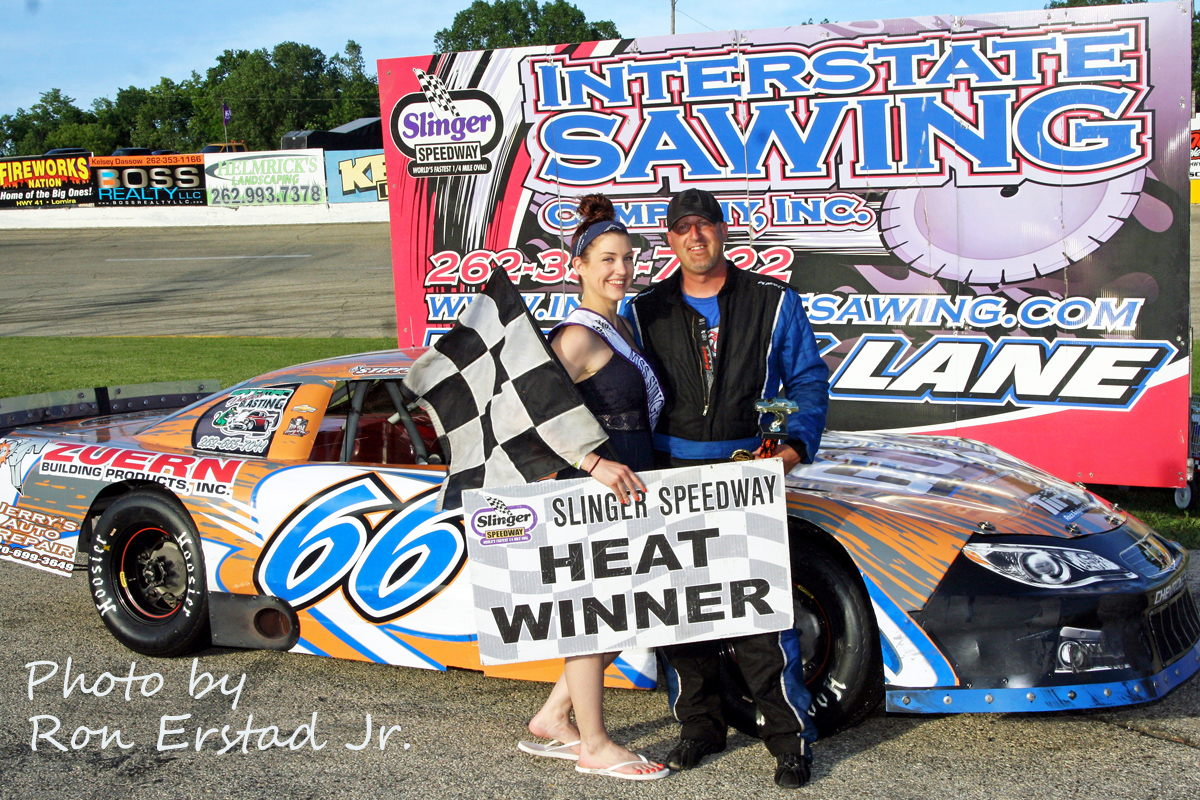 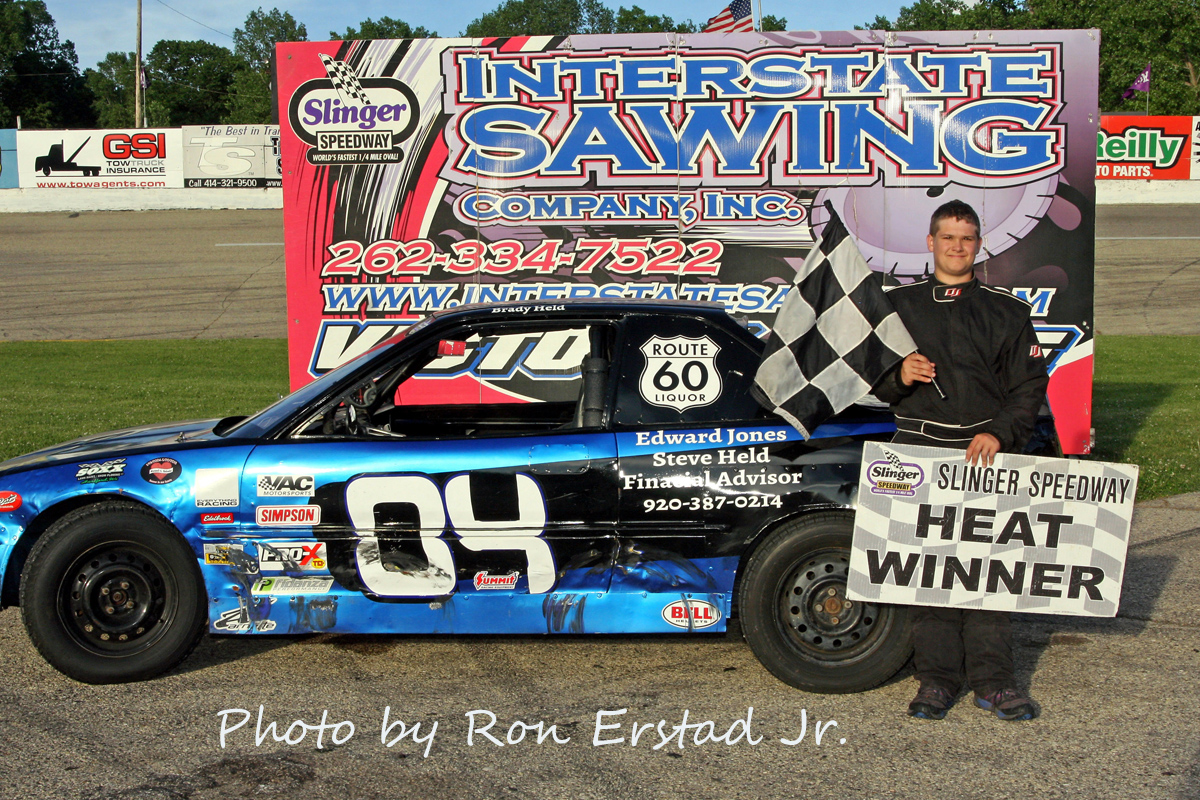 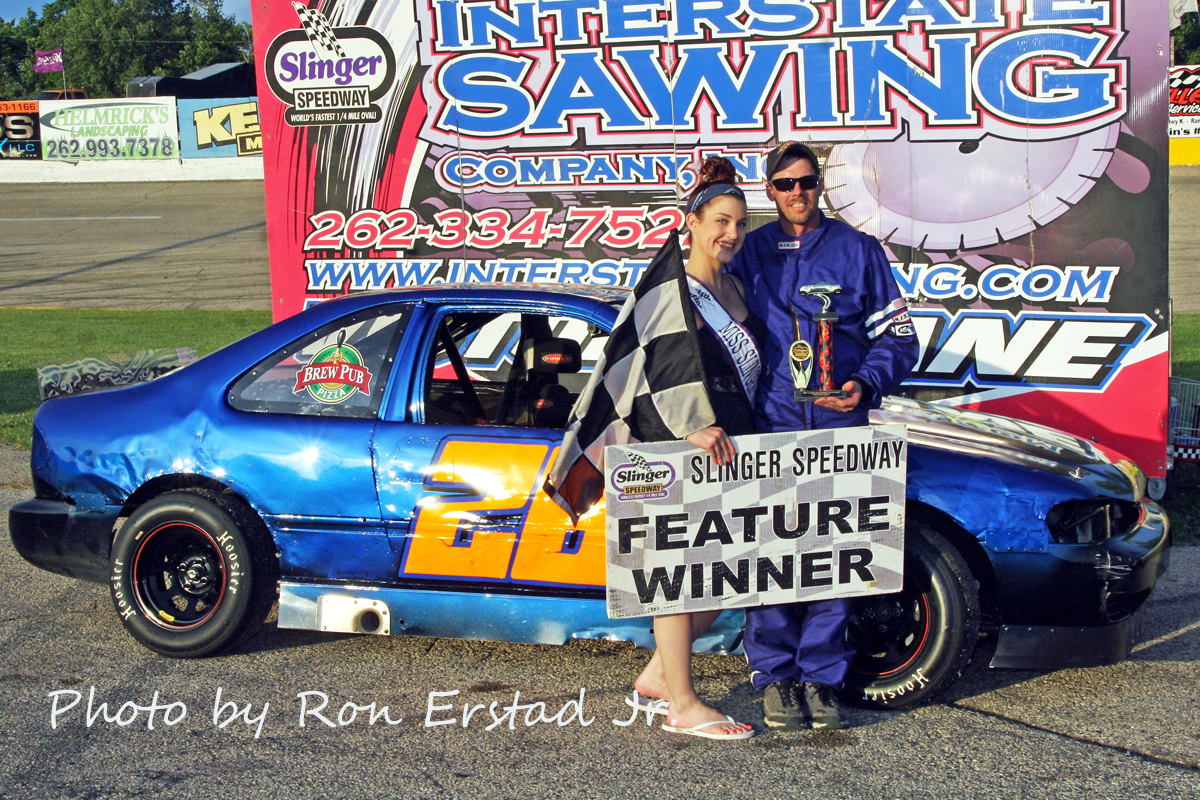 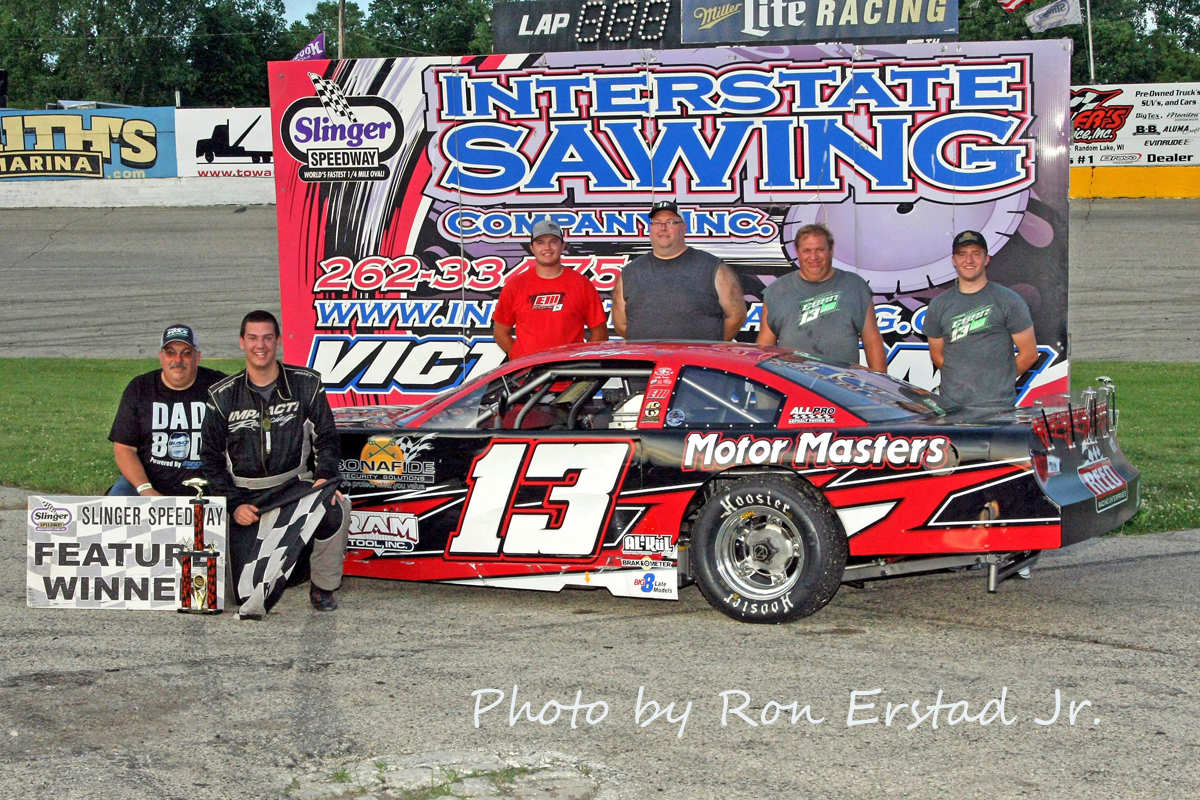 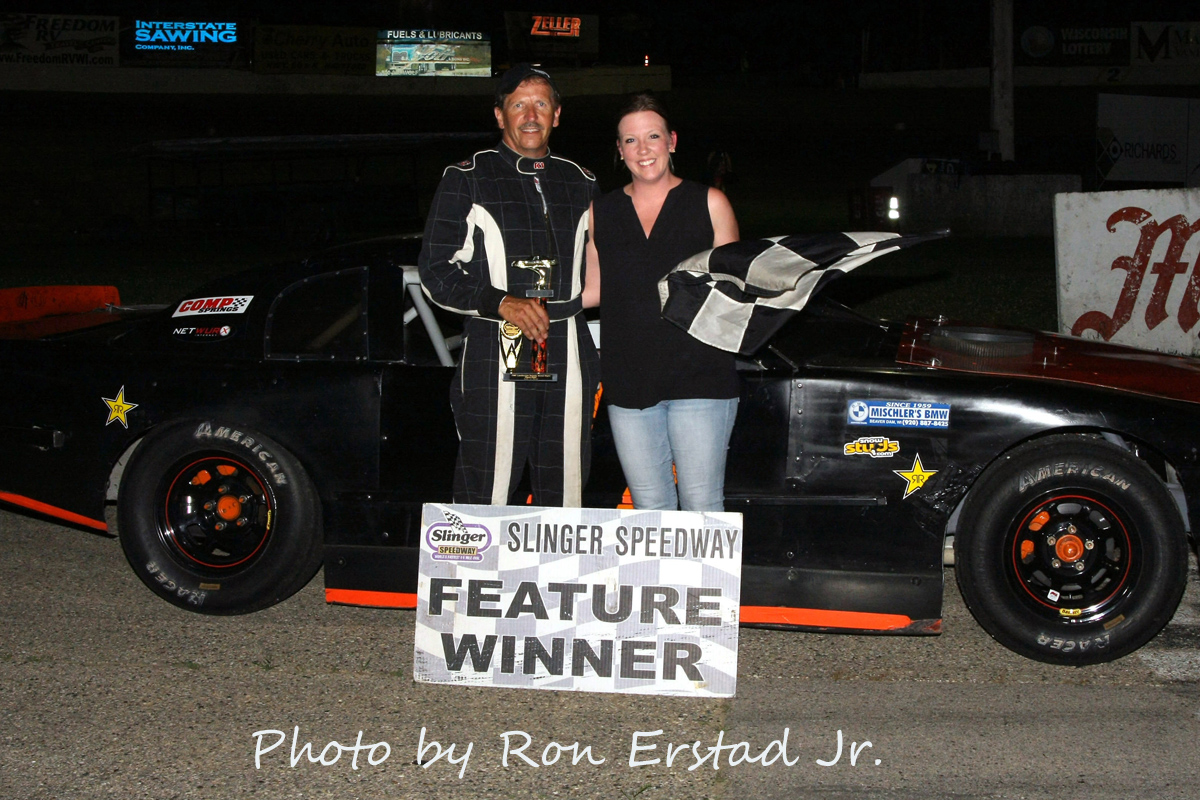