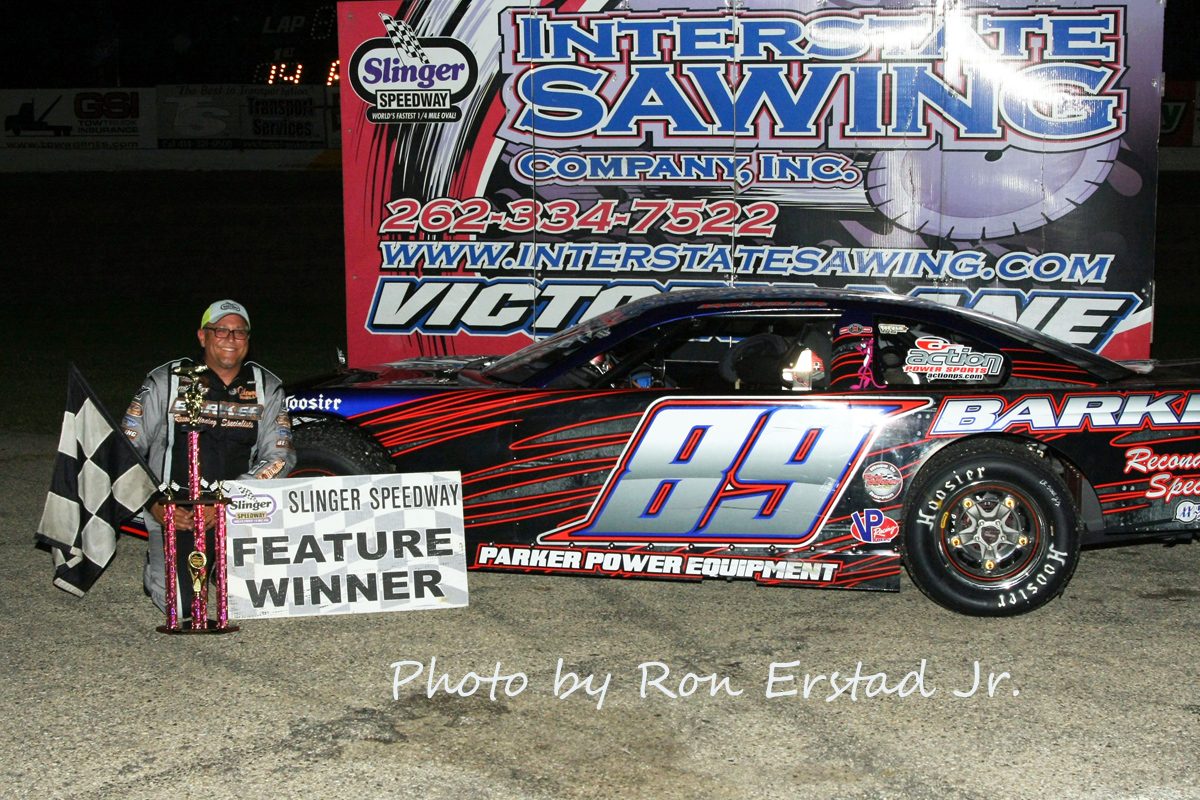 Slinger, Wis., June 24— After several promising races earlier this year, Brad Mueller put it all together Sunday night at the Slinger Super Speedway in the Lightening 75 super late model main event and captured his first victory of the season.

“God it feels great to be back in victory lane here, “ an excited Mueller told the crowd from the victory deck, “This is all about (car owner) Kevin (Barker), because the last couple weeks we’ve had a really good car and we just had to capitalize on a really good starting position. The guys have been working feverishly and I couldn’t ask for anything better than this.”

“And I flipped four times last night,” Mueller continued referencing a Saturday night race where he guest drove a dirt modified and rolled over in an incident, “I’m a little bit sore today but not sore enough not to win.”

Fred Winn and Rich Bickle led the field to the green flag and raced side by side for the lead in the opening laps before Winn eased ahead from the outside lane. Brad Mueller, Gary LaMonte, and Conrad Morgan also worked their way around Bickle as Winn set the pace out front. Mueller tracked down Winn for the lead and swept past on the inside to take the top spot on lap 8 and LaMonte and Morgan followed suit a few laps later to move into second and third respectively. Behind the front four, Bickle found himself in a battle with Alex Prunty and Grant Griesbach over the fifth spot as farther back contact between Rob Braun and Tim Lampman sent Lampman spinning off turn four to draw the first caution flag on lap 15. Braun “tapped out” at the start-finish line to take the blame for the incident as Mueller chose the outside lane for the restart. Mueller charged into the lead as racing resumed with LaMonte falling in line behind him in second. After one lap was completed, an incident back in the pack resulted in Lampman’s car spinning into turn three and in the ensuing melee Jerry Eckhardt’s car slid hard into the turn three wall while Brad Keith’s car also sustained severe damage as several other cars headed off the track to attend to minor damage.

Before a lap could be completed on the restart, the field bunched up off turn four which resulted in another incident this time involving Chris Blawat, Rob Braun, and Jeff Holtz as the caution waved again. As the race went back to green, Mueller once again edged ahead of LaMonte as Alex Prunty moved into third place, keeping pace with the leaders. Prunty’s strong run was short lived however as his car suddenly shot up the racetrack in turn four and then came to a stop in turn two on lap 29 after suffering a broken suspension part. Once again Mueller retained the lead as racing resumed while Steve Apel challenged LaMonte for second, eventually taking the position a few laps later. Farther back, Rich Bickle began to march through the field, advancing forward to battle Conrad Morgan over fifth. Mueller maintained a comfortable lead over Apel and LaMonte as the laps wound down while Bickle muscled his way around Morgan for fifth and then came out ahead of a several lap battle with Grant Griesbach over fourth place. Mueller drove to the victory over Apel while LaMonte finished third just ahead of a fast closing Bickle in fourth while Griesbach finished fifth.

Super late model heat races were won by Mike Held, Nick Wagner, and Rob Braun while Brad Keith was the fastest qualifier with a lap of 11.317 seconds.

Jay Kalbus won the 30 lap Area Sportsman feature after taking the lead on lap 11. Jacob Schraufnagel drove to a second place finish while Paul Wagner and Rich Wagner took the checkered flag in third and fourth place respectively. Joe Shelby finished fifth. The Area Sportsman heat race was won by Joe Shelby and the fastest qualifier was Jay Kalbus with a lap of 12.822 seconds.

Ryan Lovald bested the field in the ten lap Figure 8 race to take home the victory and close out the evening. 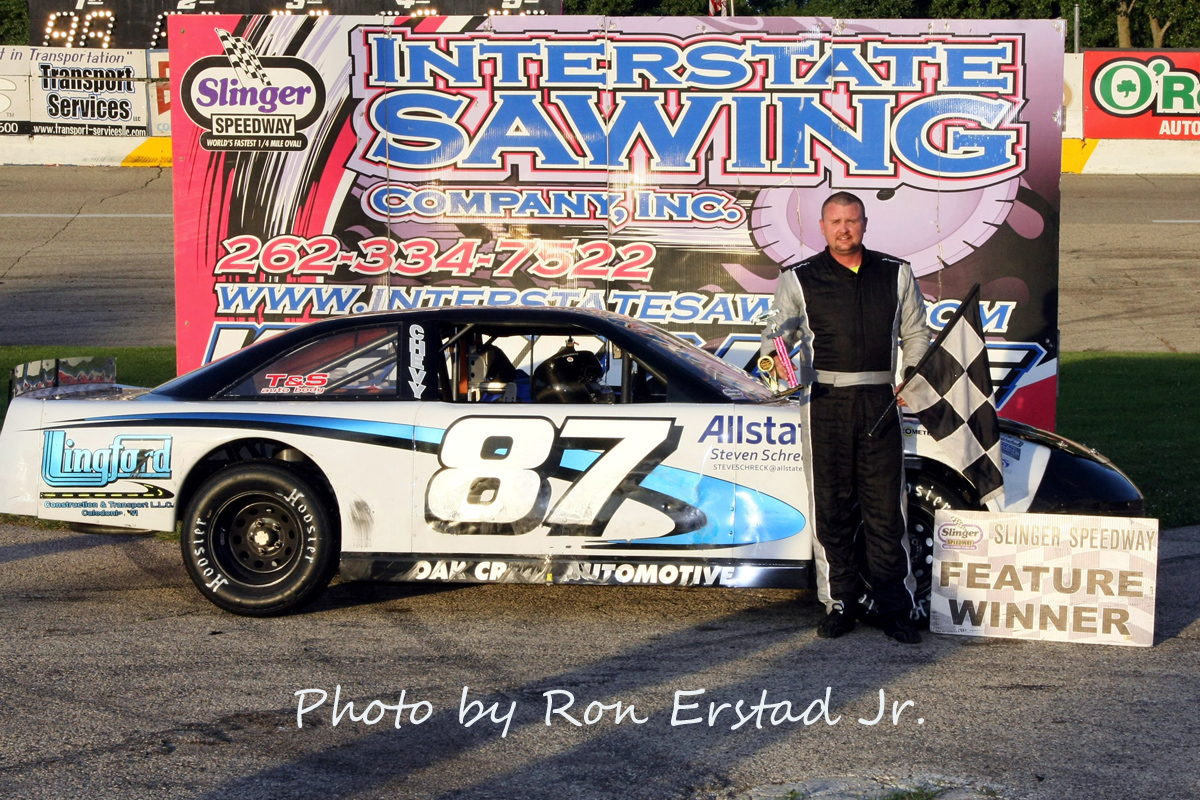 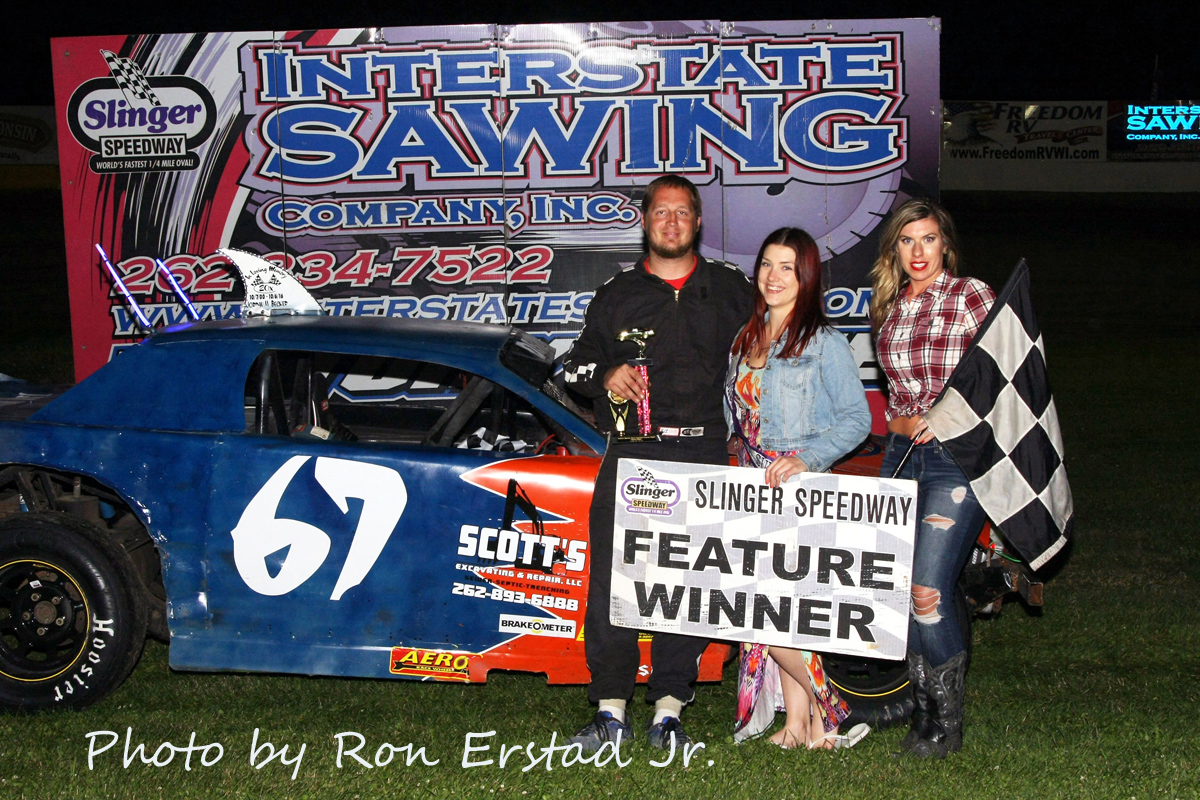 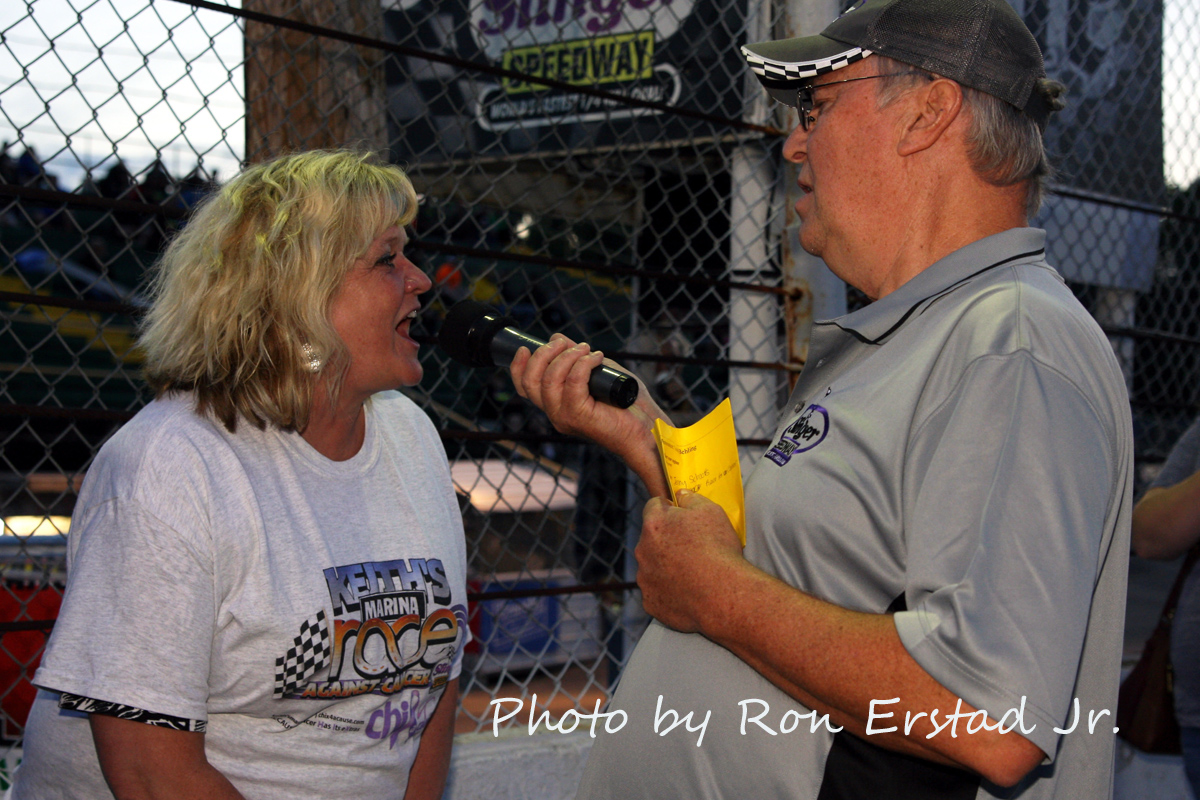 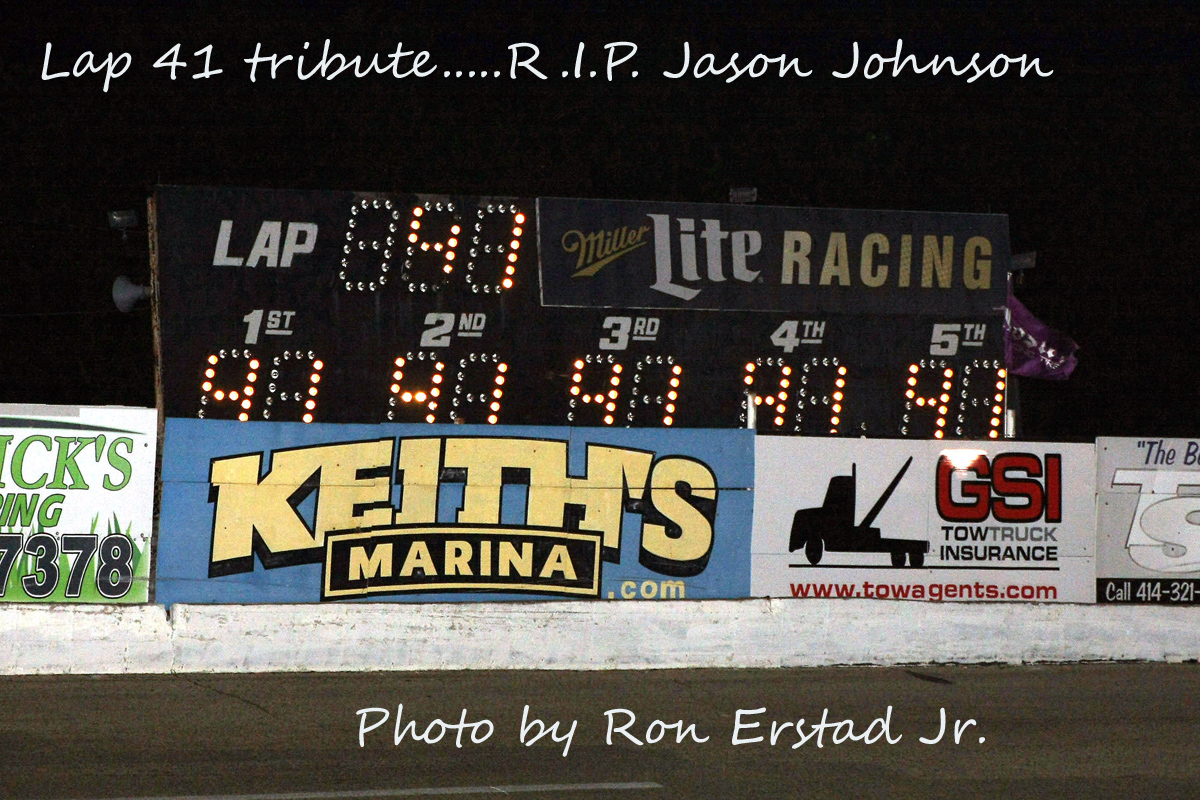 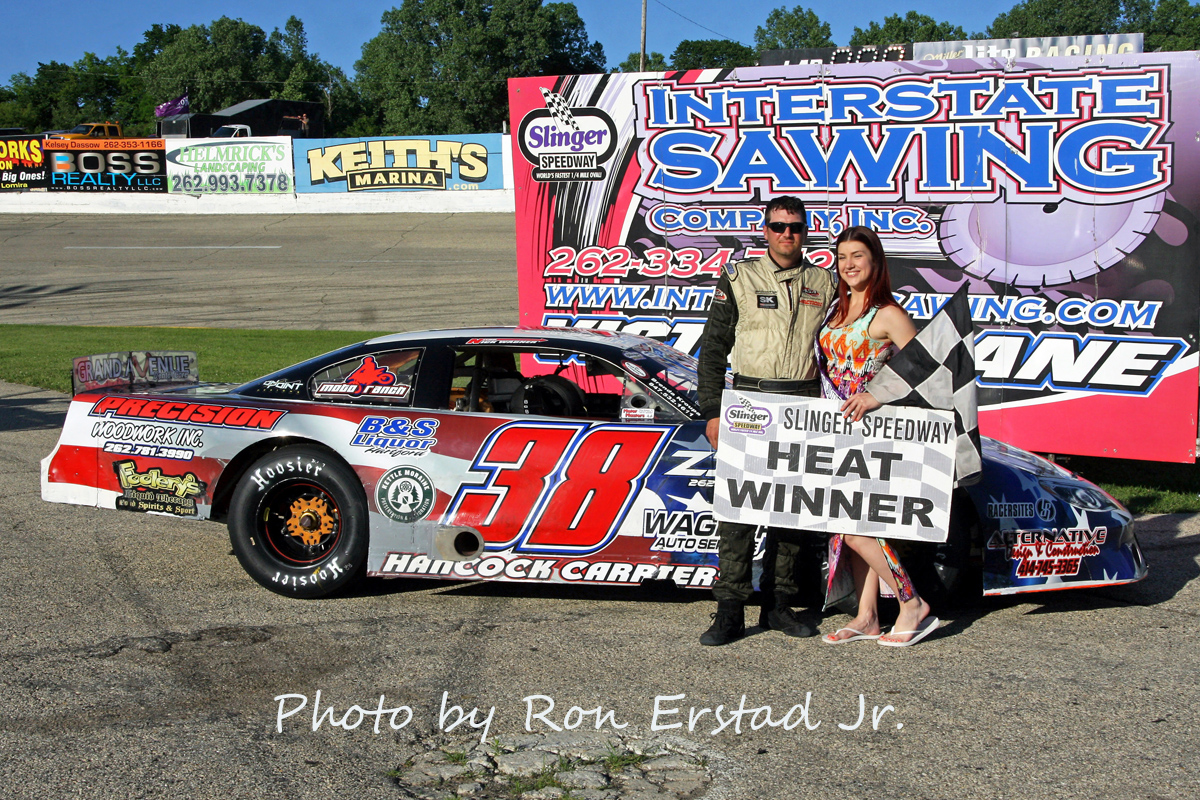 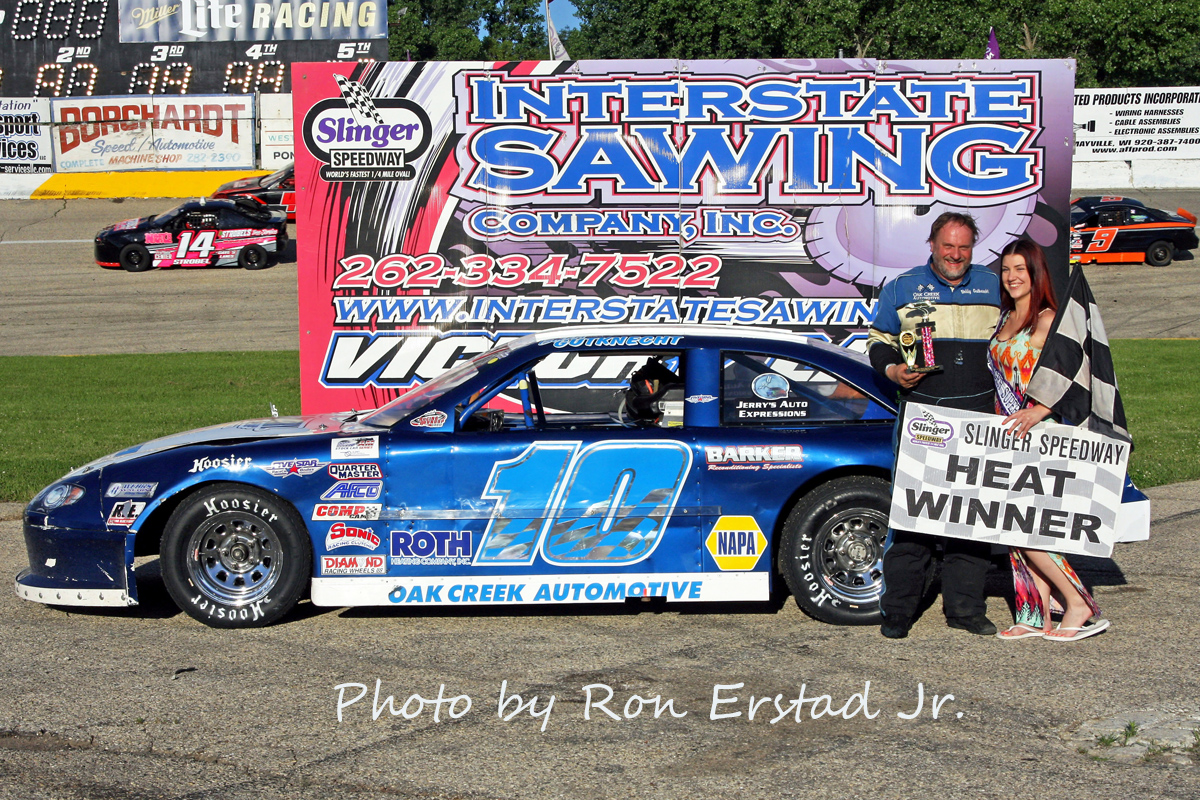 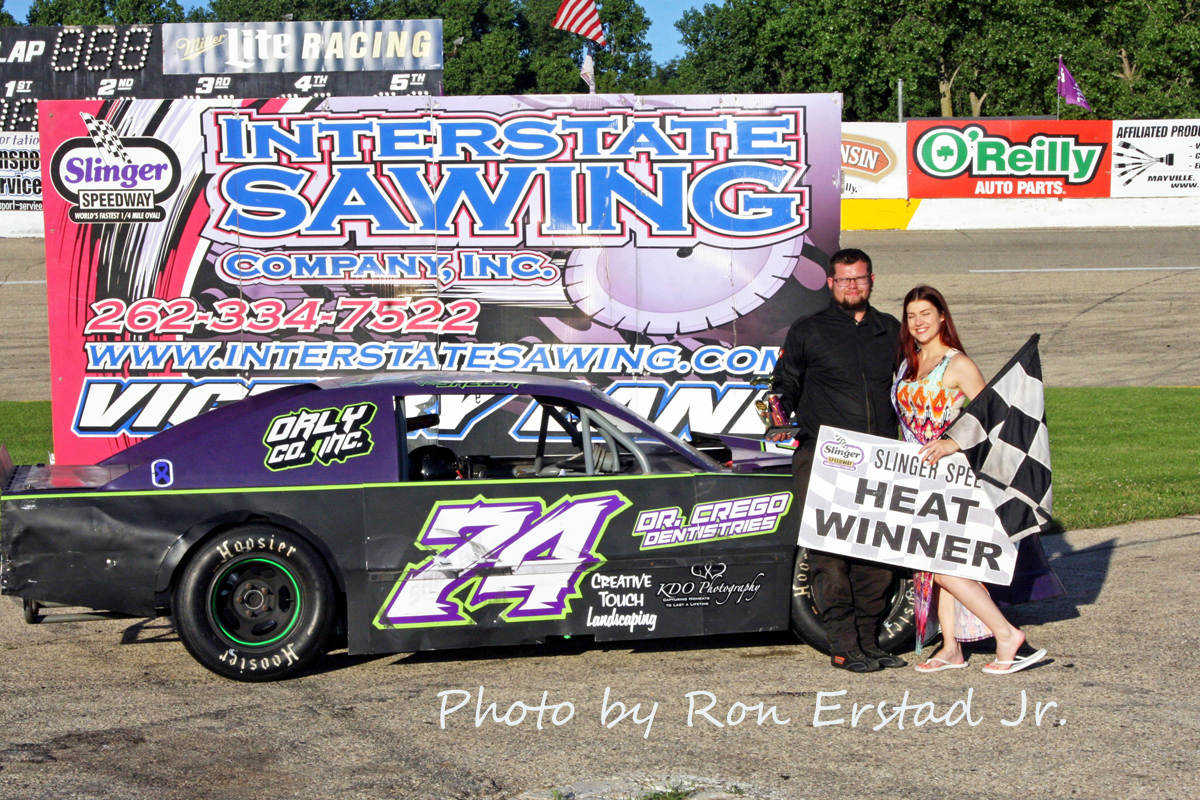 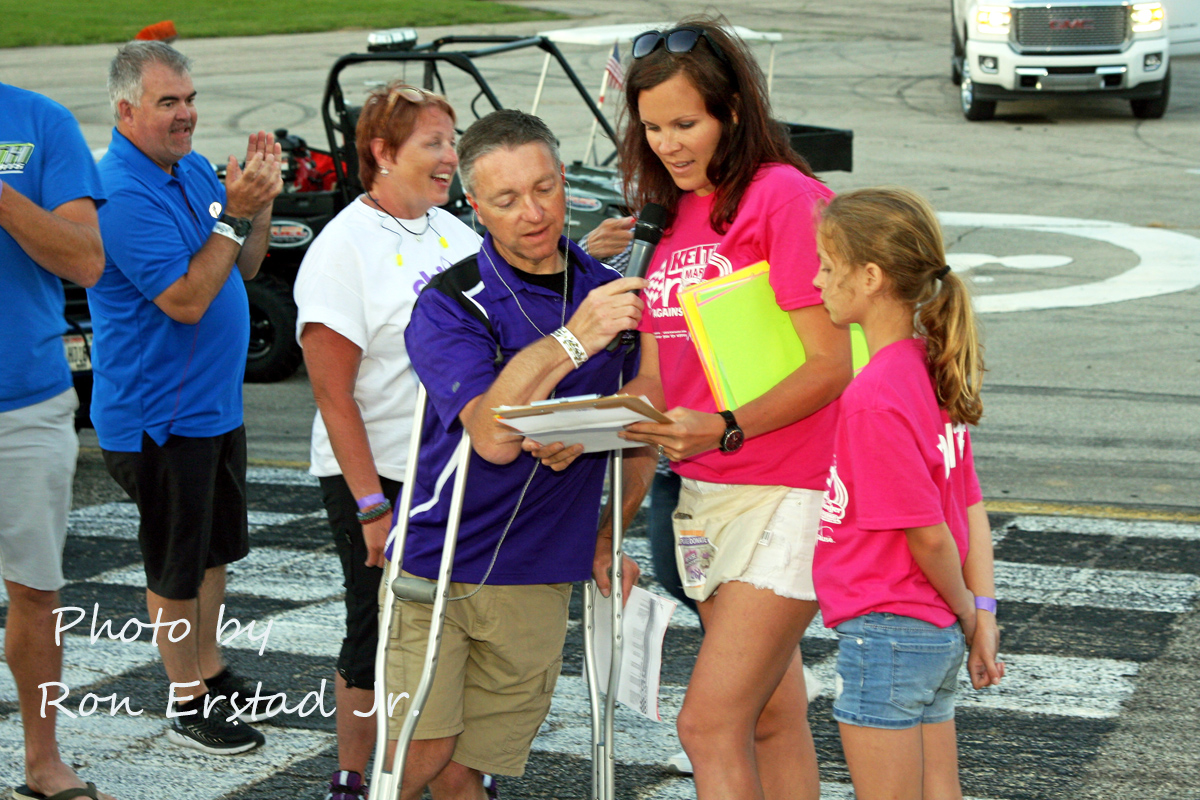 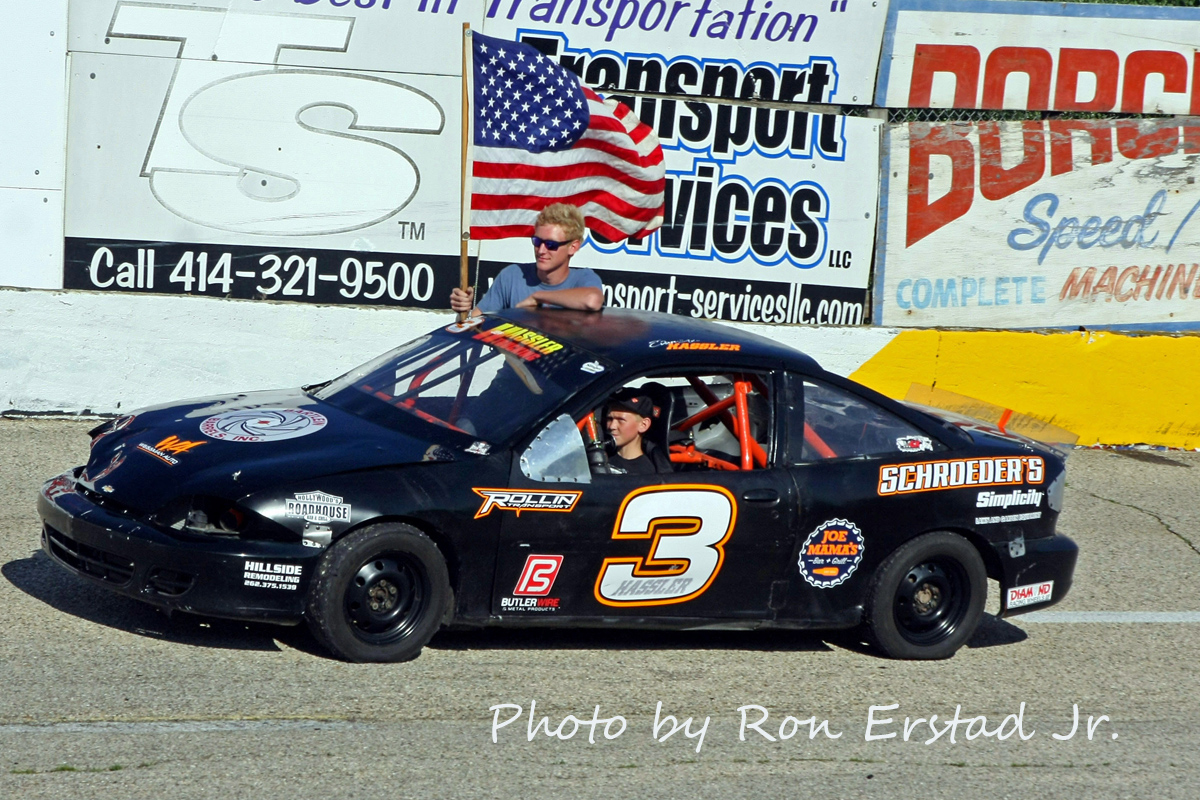 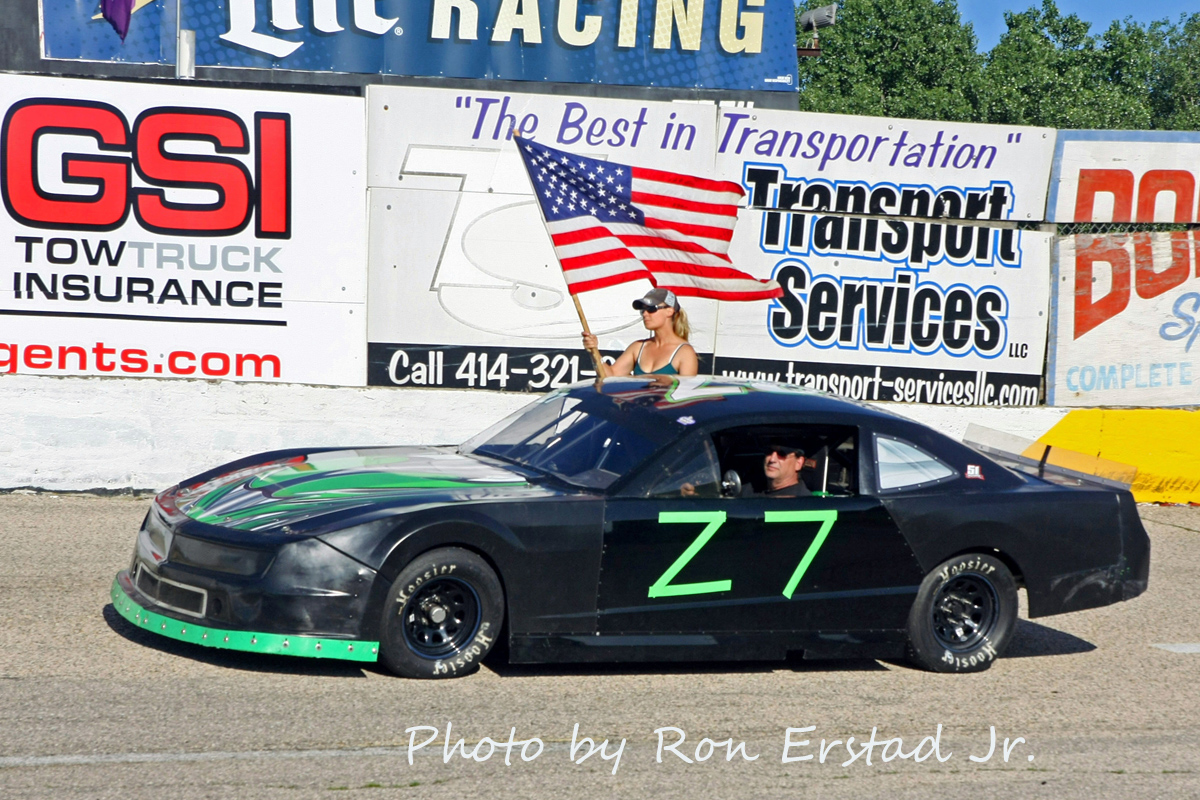 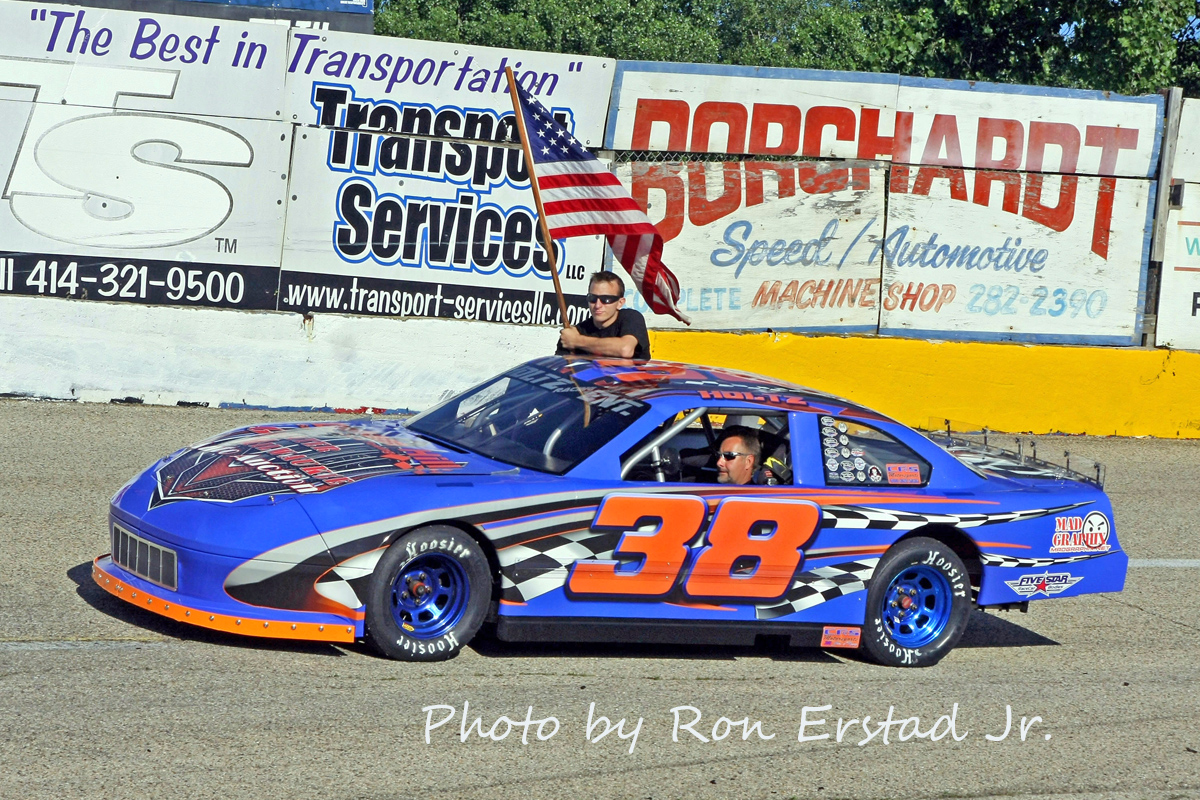 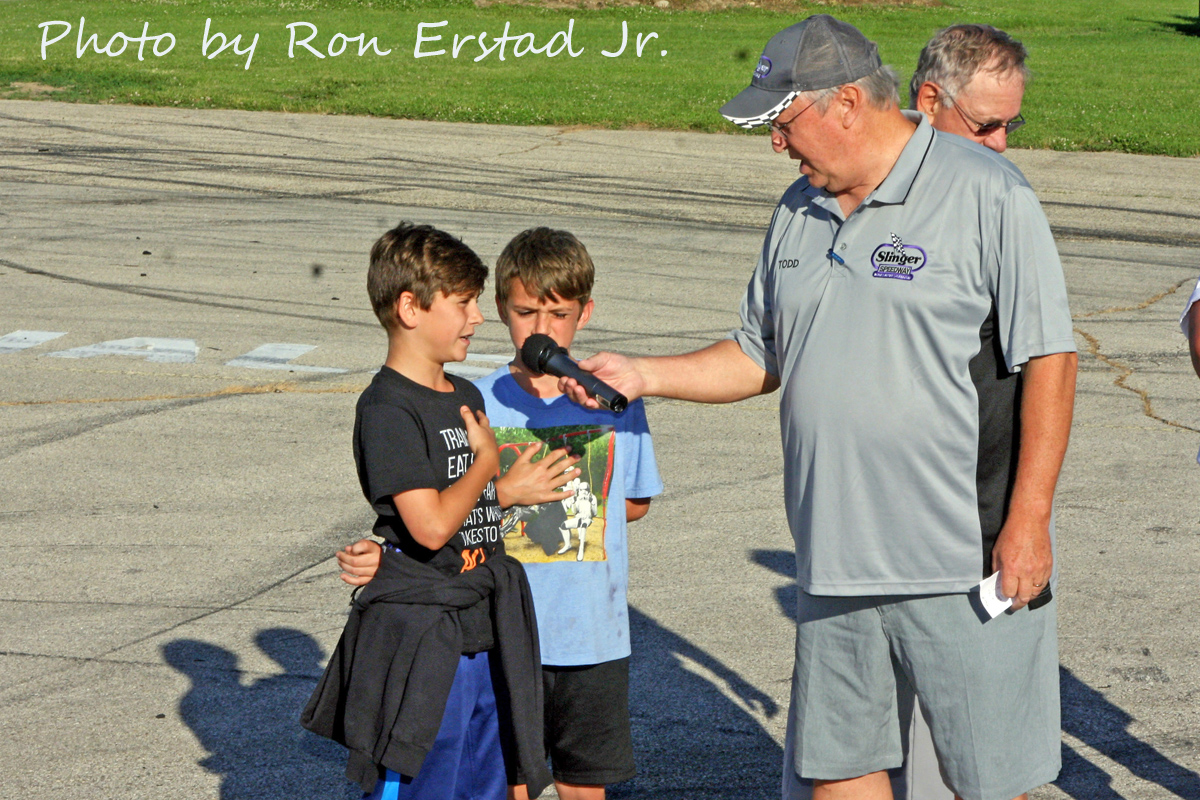 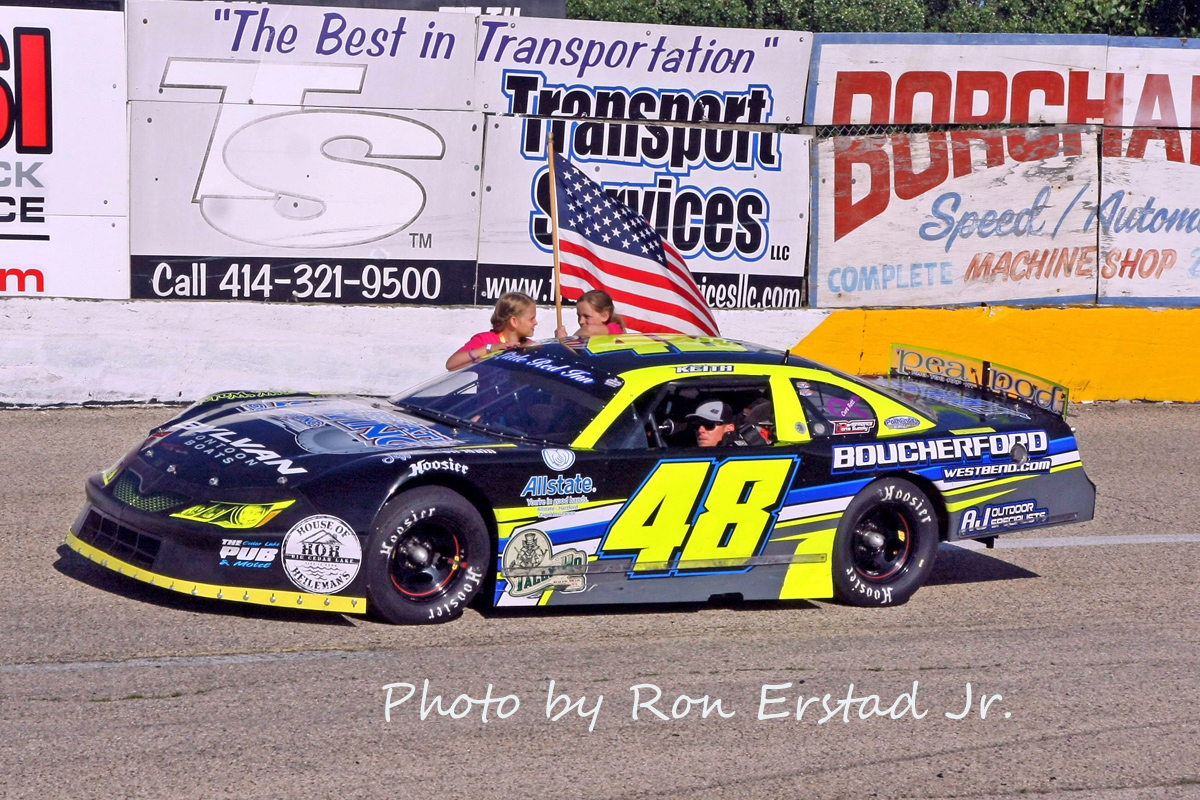