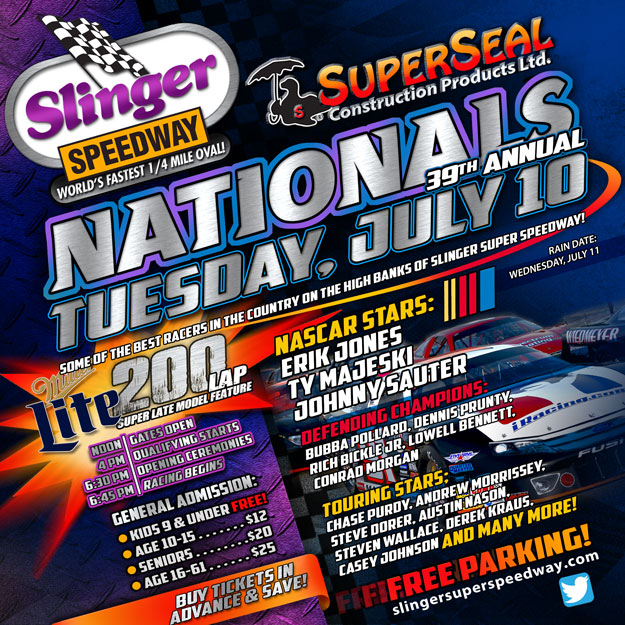 The 23-year-old, from Seymour, Wisconsin in currently residing in North Carolina and has won nearly everything that there is to win in super late model racing, in the Midwest, before moving south and racing in the NASCAR Xfinity Series, for Roush Fenway Racing. Majeski is a three-time ARCA Midwest Tour champion and is coming off of a career best seventh place Xfinity finish at Iowa Speedway.

“We needed that seventh place finish at Iowa, for the Xfinity program,” said Majeski. “We’ve just had some terrible luck and it felt really good to have a solid run all day long and a solid finish.”

Sandwiched in between the Iowa race and his next Xfinity race (Kentucky) will be a return to his super late model roots and the Slinger Nationals.

“We came real close last year at the Nationals,” recalls Majeski. “That’s just one of those events that I want to win. I want to put my name up on the board, alongside some of the great short-track racers that this area has seen.”

In the 2017 version of the Slinger Nationals, Majeski recovered to finish fourth, after getting sent to the rear of the field, for his involvement in an incident with 31 laps remaining.

Ty Majeski will have plenty of nationally ranked super late model competitors challenge him in his quest to be crowned a Slinger Nationals champion. Reigning NASCAR Cup Series Rookie of the Year, Erik Jones, has already signed up to return to Slinger, in quest of his first Slinger Nationals big check. Former NASCAR Truck Series champion, and current point leader, Johnny Sauter will be in search of his first Slinger Nationals crown while Georgia racer, Bubba Pollard looks to defend his 2017 Nationals victory. ARCA Racing Series rookie, Natalie Decker is expected to return to her home state and challenge for the Nationals win as is Chase Purdy. Purdy is a member of the 2018 NASCAR Next class while currently competing full-time on the ARCA Racing Series. Derek Kraus, yet another current NASCAR Next class member, and reigning Rookie of the Year in the K&N Pro Series West, is also expected to don his super late model shoes and challenge for the win. Florida’s Steve Dorer, a former Red Bud 300 winner and past top-five finisher at the Slinger Nationals is also entered. The latest entry is from Steven Wallace son of NASCAR Hall of Famer Rusty Wallace.