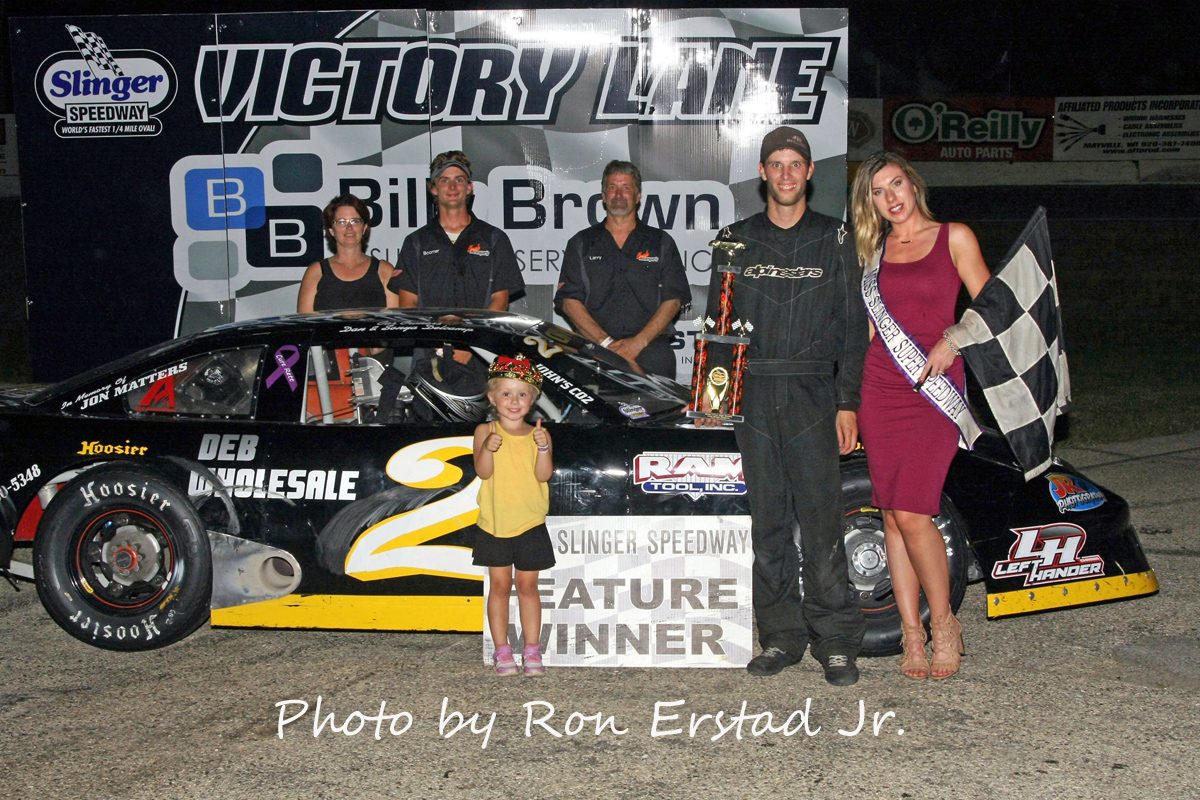 “We felt kind of bad losing on Tuesday night (during the Slinger Nationals) so we kind of went to work this week, “Chwala told the crowd from victory lane after leading every lap, “With qualifying so close, we were four hundredths off and qualified eighth and with the luck of the draw we were able to save tires and it worked out. It’s two years in a row so I guess I’ll have to come back next year.”

Ryan Gutknecht sliced his way forward from deep in the field and tried to catch Chwala in the closing laps but ultimately had to settle for second at the checkered flag.

“My car started to get a little tight in the center and loose off (the turns),” Gutknecht stated after racing in two separate divisions and nearly winning both features, “And I started getting really tired from all that driving today so I knew if I could get to him (Chwala) he would be really hard to beat.”

Jacob Nottestad made another trip to the Slinger highbanks and it paid off with a strong third place finish.

“It was a really good run for us and we had a solid car so I have to thank all the guys back at the shop for giving me a heck of a piece,” Nottestad stated after his third place result, “I really took a liking to this place the first week I was here and I don’t want to leave.”

Brian Holtz rebounded from a tough week last Sunday to finish a strong fourth after racing near the front of the field all race long and Nick Egan used a late charge to finish fifth. E.J. Waldron edged Al Stippich for the sixth position at the stripe while Shaun Scheel, Zach Braun, and Tom Jasinski rounded out the top ten finishers.

Not only did Ryan Gutknect set fast time and finish second in the late model feature, he also scored a clean sweep in the Lingford Construction Midwest Sportsman class by setting fast time and winning both his heat race and the 30-lap feature.

Gutknecht took the lead from Kenny Joosten on lap 23 of the main event and drove to the victory. Joosten, who grabbed the top spot from early leader Eric Lingford on lap 13, followed Gutknecht to the stripe to finish second. Bobby Gutknecht took the checkered flag in third while Eric Lingford and Jimmie Evans rounded out the top five. Jimmie Evans and Ryan Gutknecht were the winners of the Midwest Sportsman heat races while Gutknecht’s qualifying lap of 12.692 seconds was good enough for fast time on the evening.

Zach Greer captured his second feature win of the season as he won the 25-lap Slinger Bee feature in an exciting event. Greer raced into the lead in the waning laps after Tom Elsinger Jr. suffered a flat tire exiting turn four while battling with Matt Urban for the top spot and both leaders washed to the wall allowing Greer to charge by. Brady Held finished second while Urban recovered to finish third. Brandon Berens and Jake Rudser finished fourth and fifth respectively. Slinger Bee heat races were won by Zach Greer and Brady Held while Marty Tackes was the fastest qualifier at 15.228 seconds.

Baiden Heskett swept the Legends division as he set fast time, won his heat, and raced to the victory in the 25-lap feature. Tim Brockhouse finished a close second while Aaron Moyer rebounded from an early spin to finish third. Alex Braseth and Darrell L. Stewart finished fourth and fifth respectively. Ryan Mech and Baiden Heskett each won a Legends heat race while Heskett set fast time at 13.385 seconds which was a new track record.

Kody King held off Laney Osborne to win the 20-lap Bandolero main event. Robby Rucks finished third followed by Michael Guderski while Anna Price was fifth. Bandolero heat races were won by Zachery Konop and Karter Stark while Stark also was the fastest qualifier with a lap at 14.920 which was a new track record.

Nick Ostberg scored his first feature win of the season in the Figure 8 race at the end of the evening. 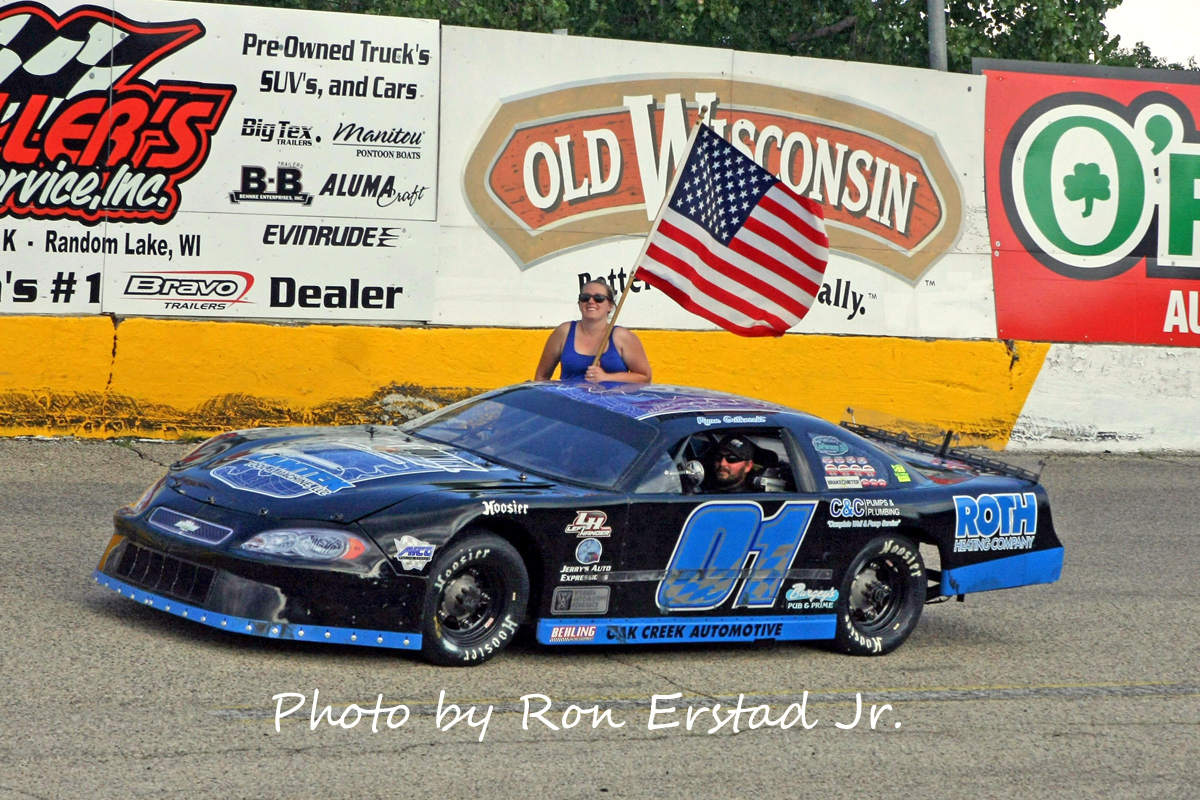 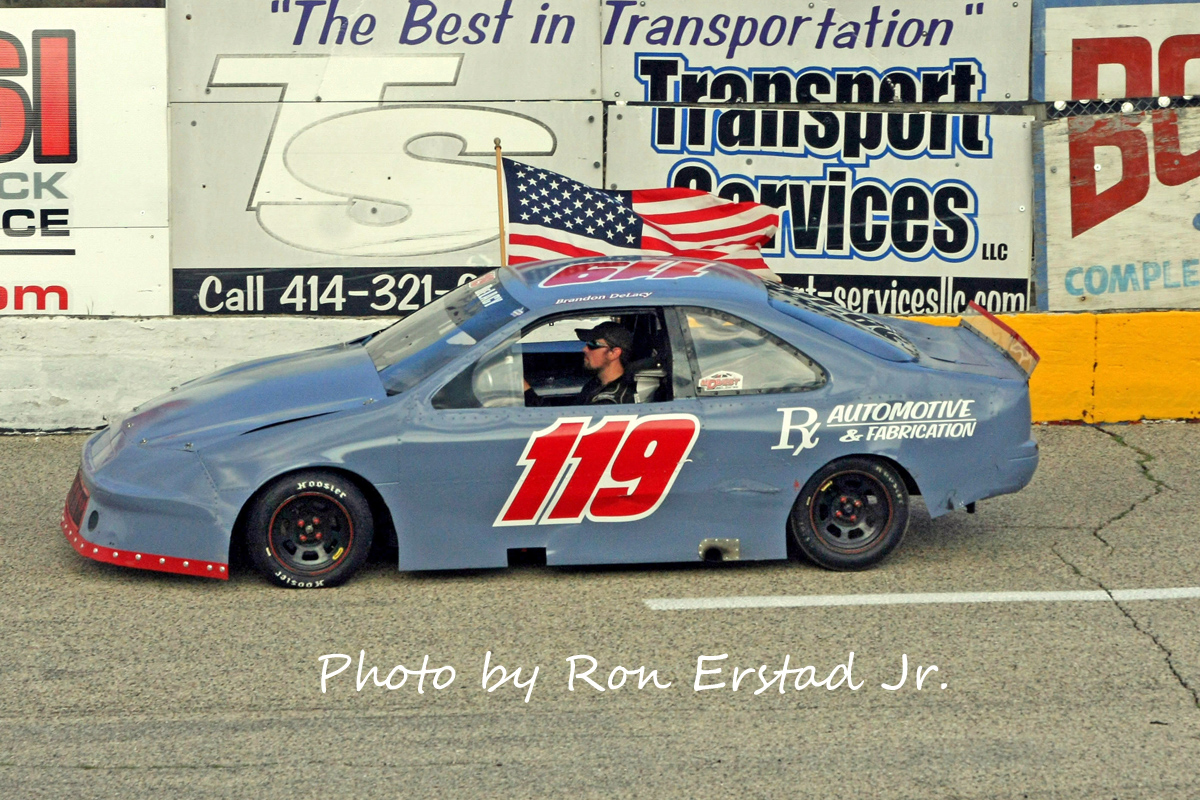 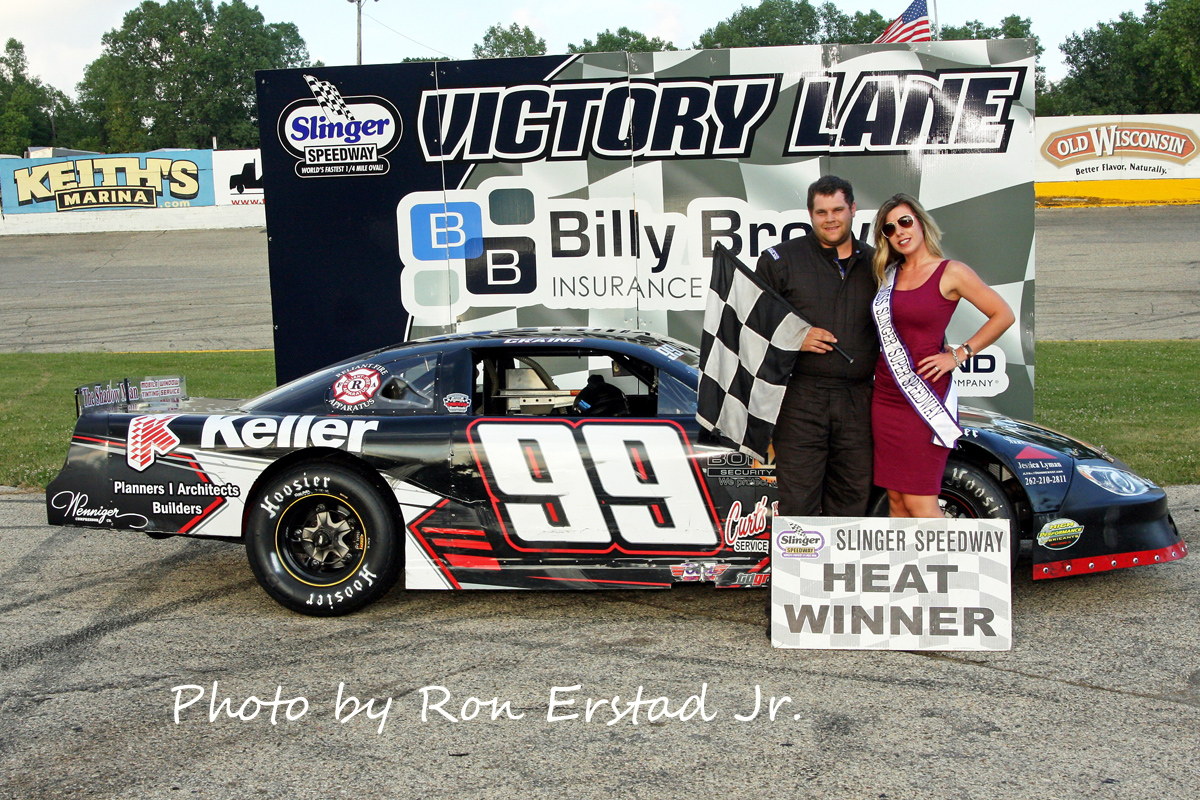 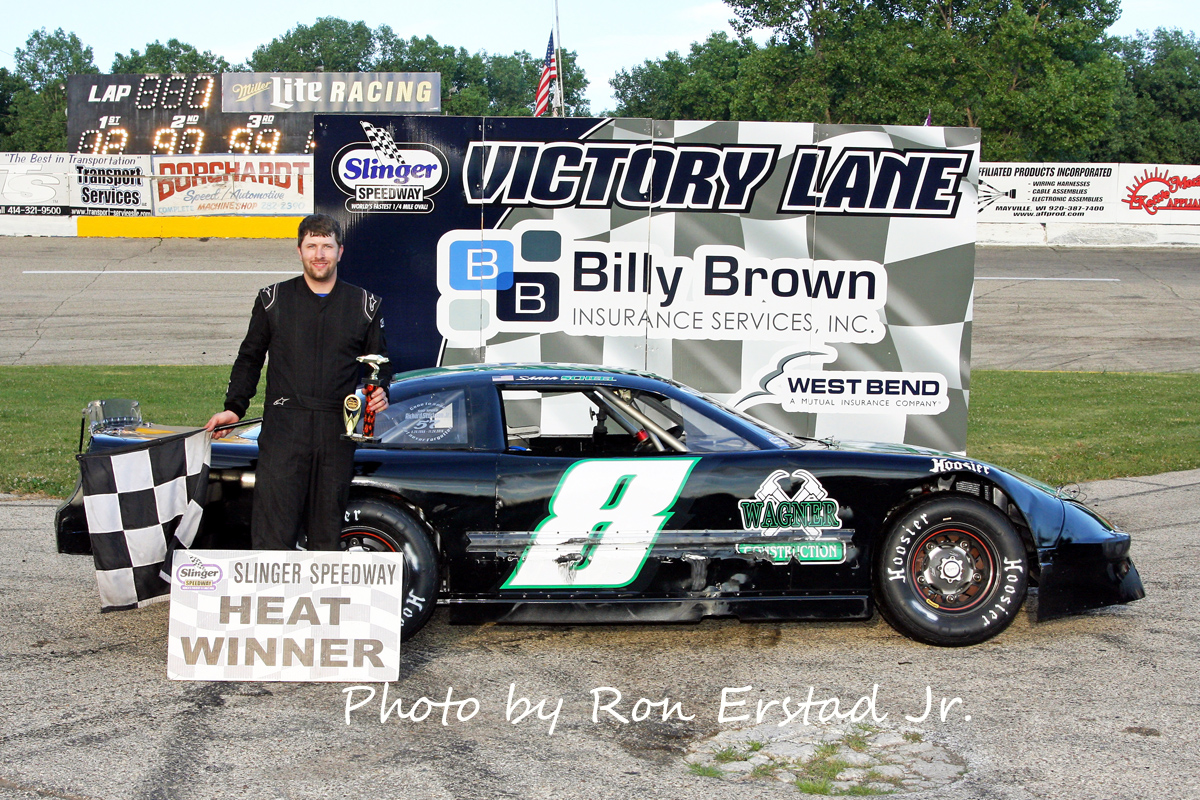 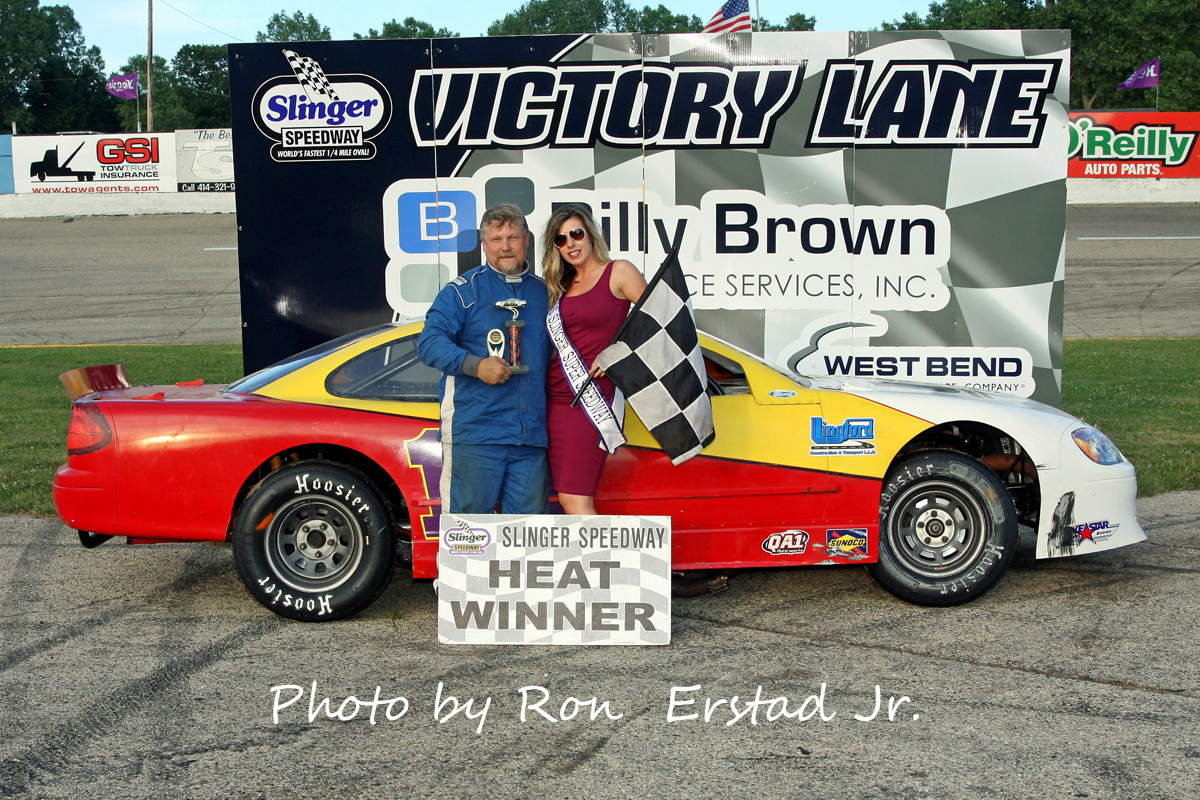 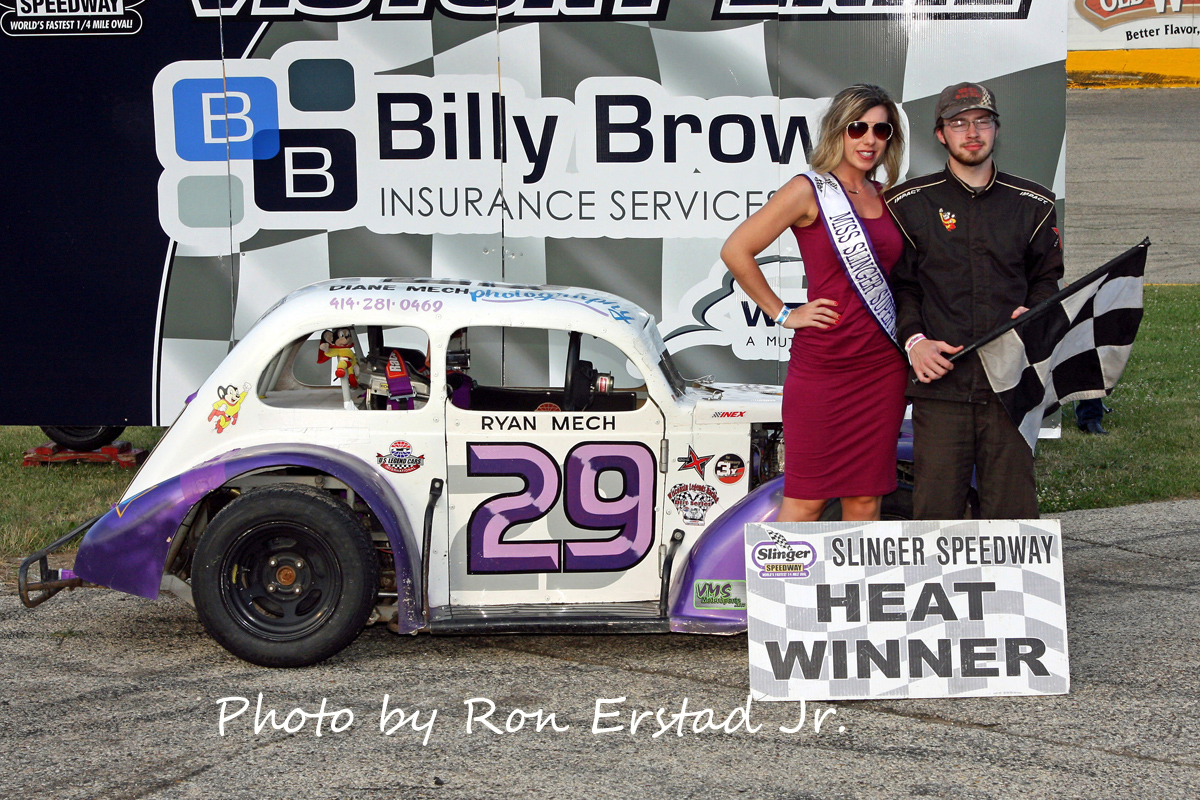 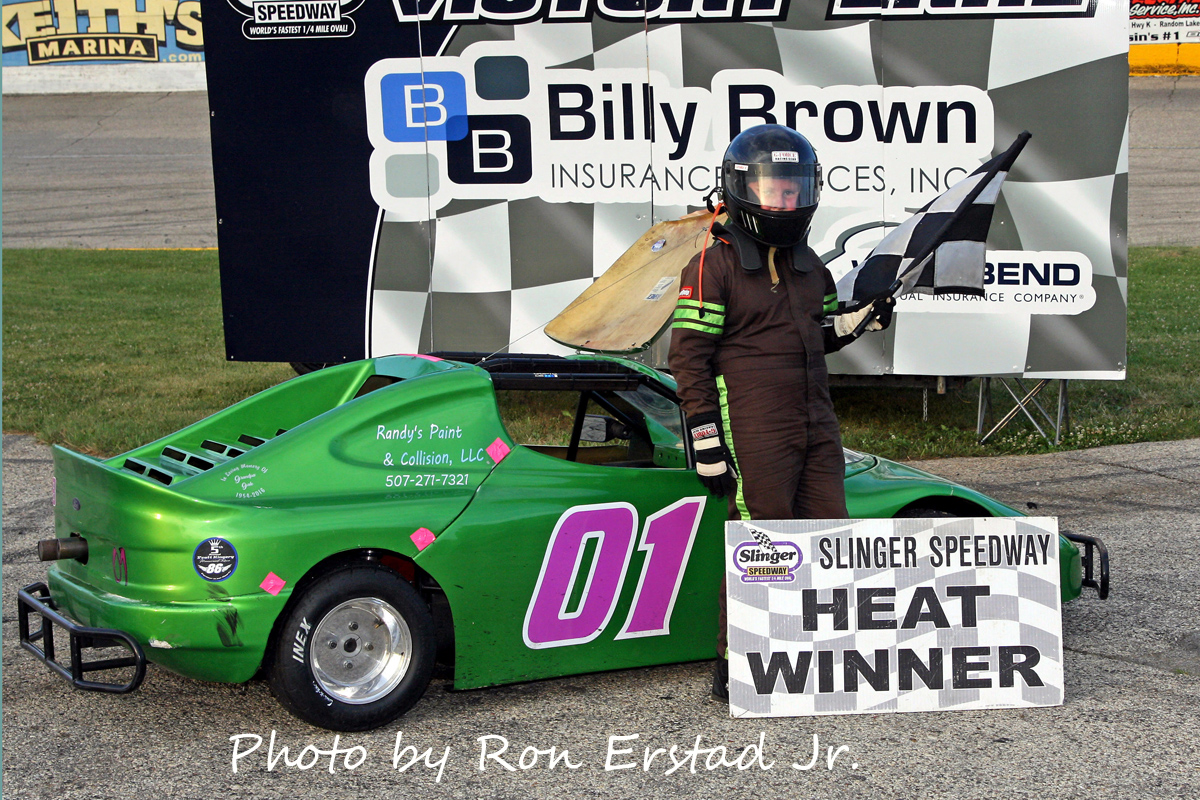 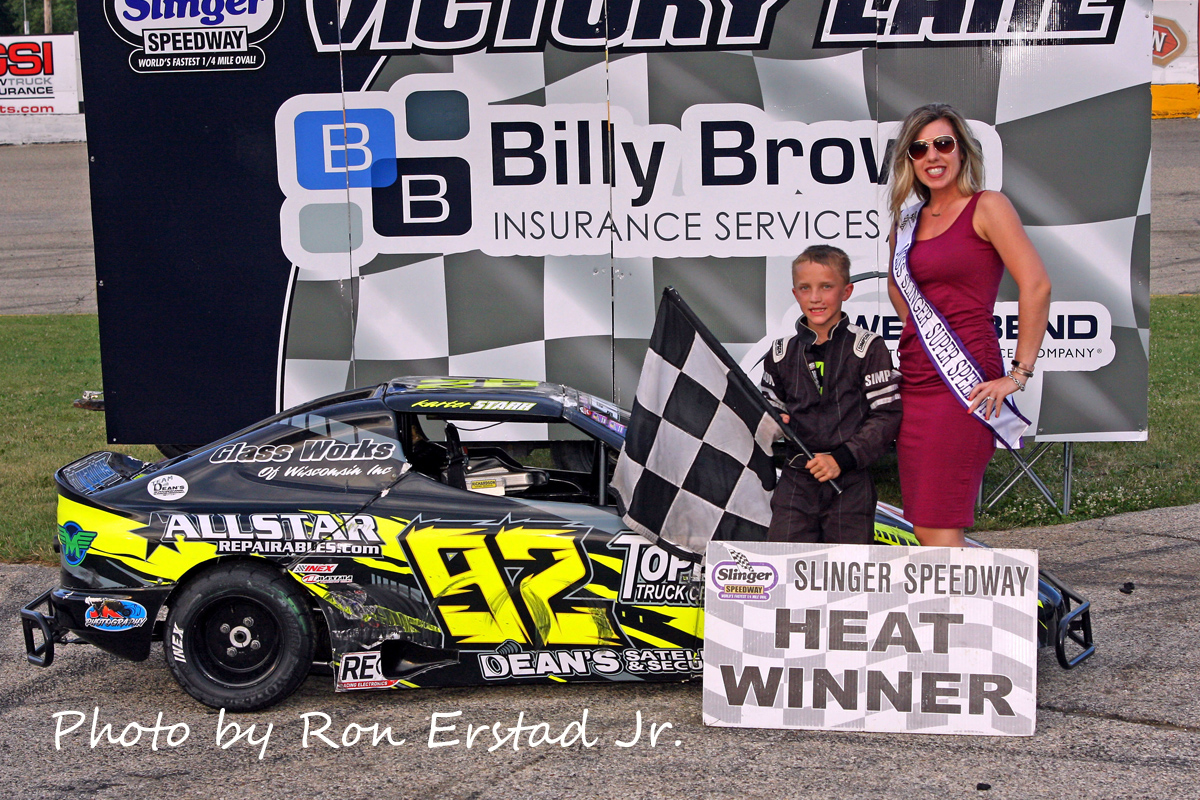 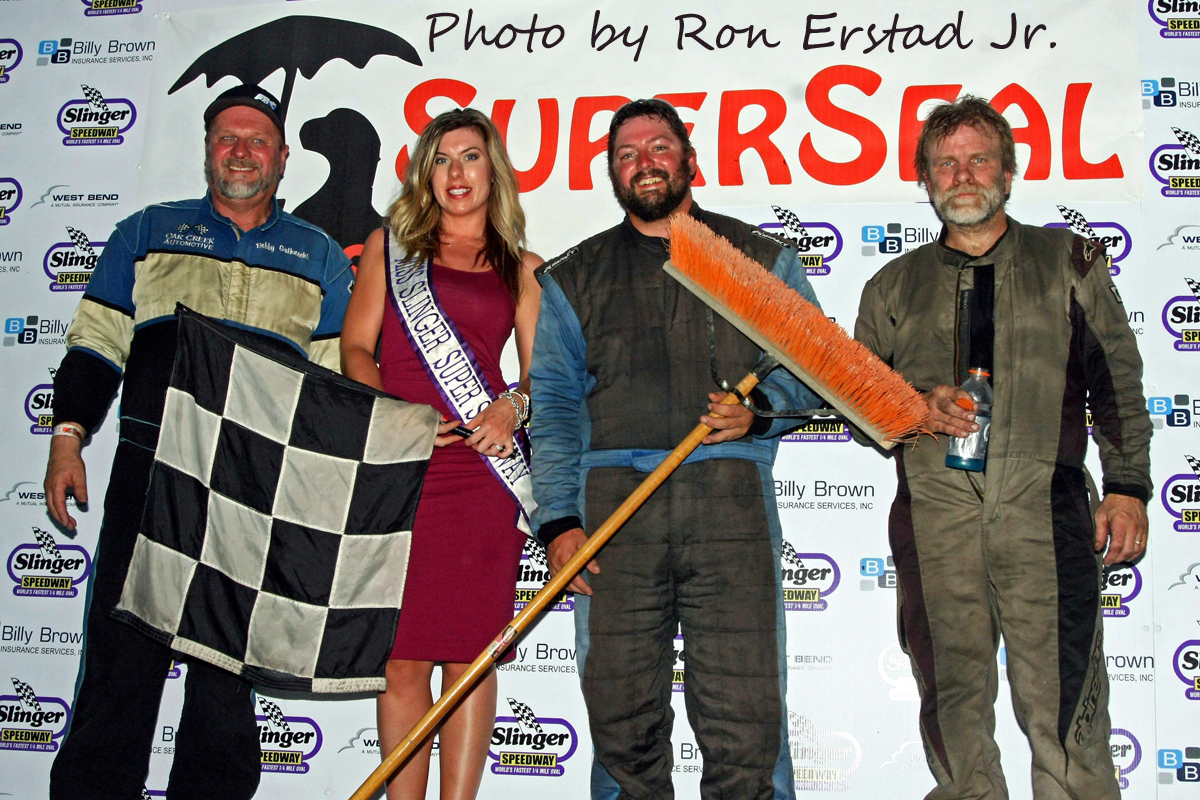 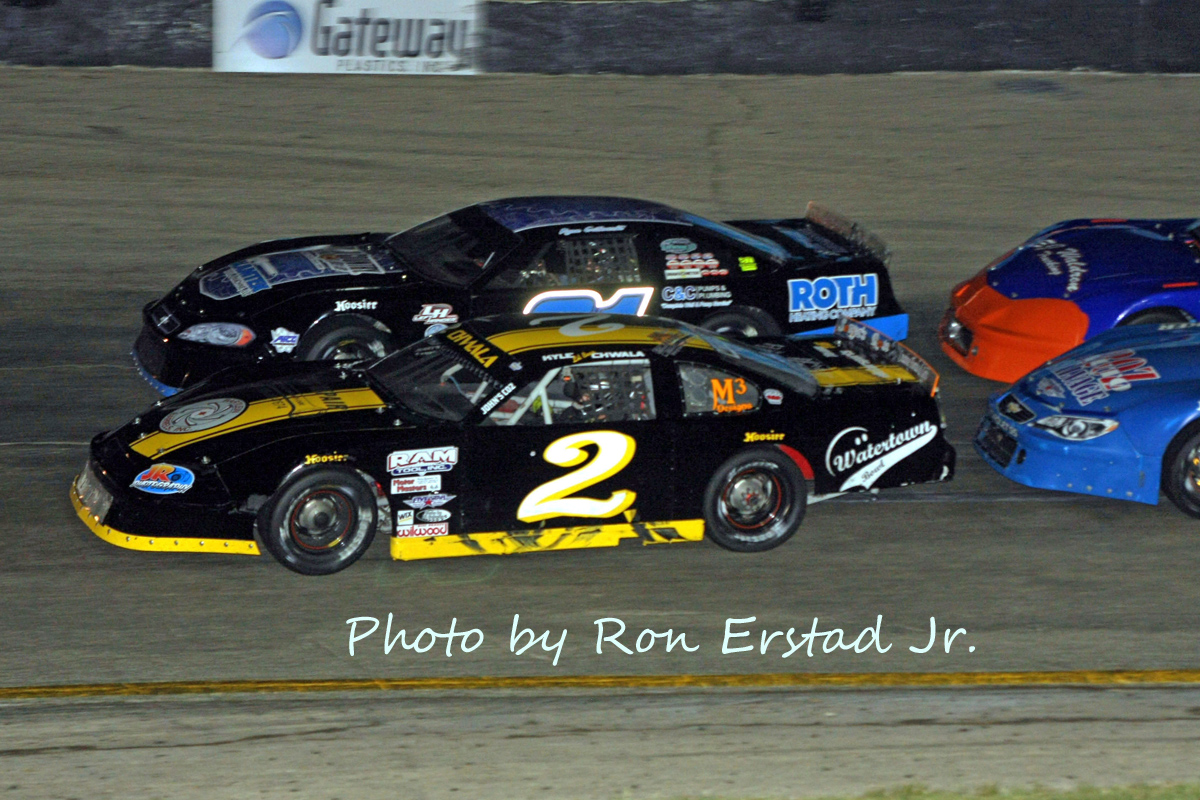 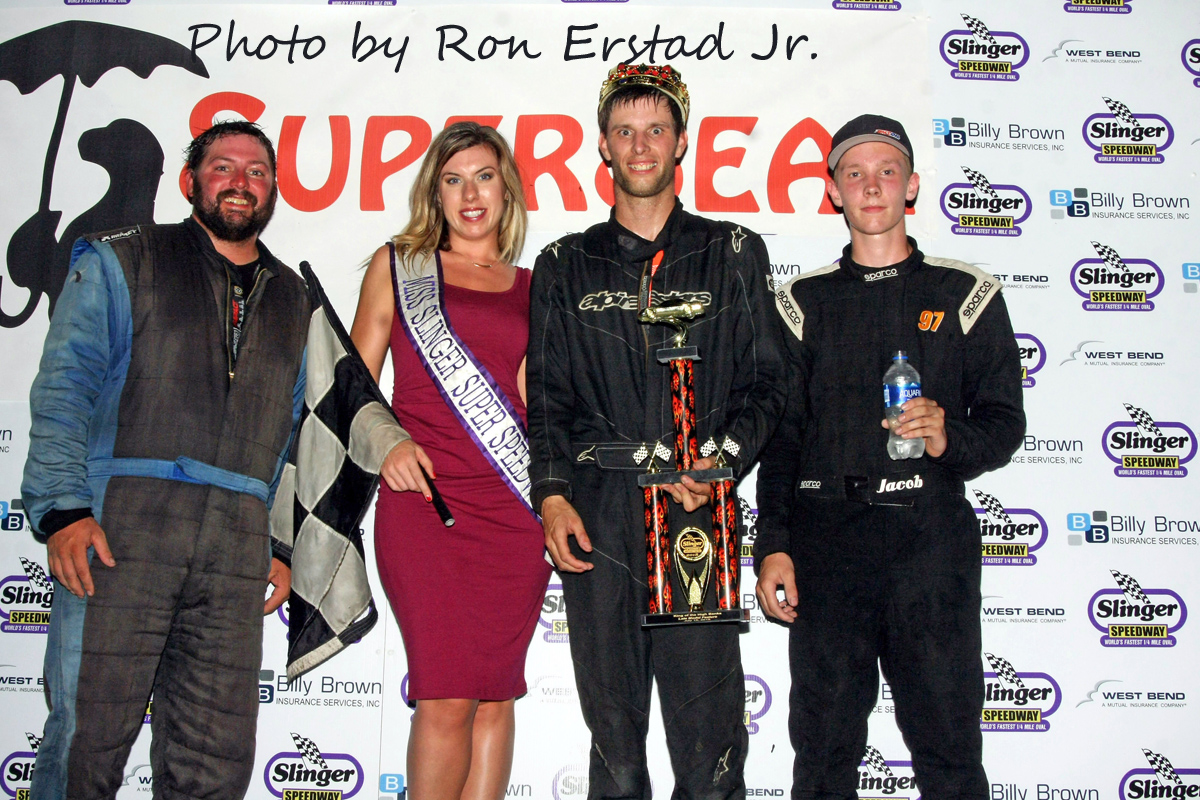 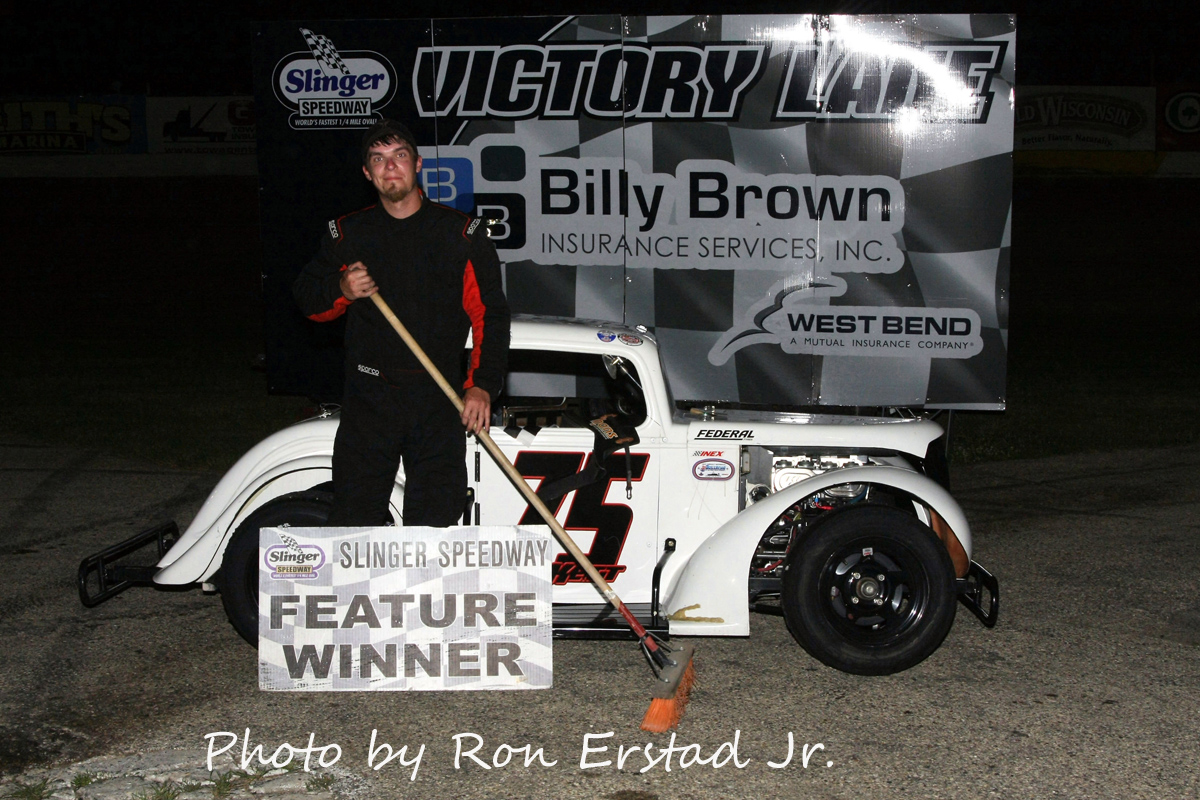 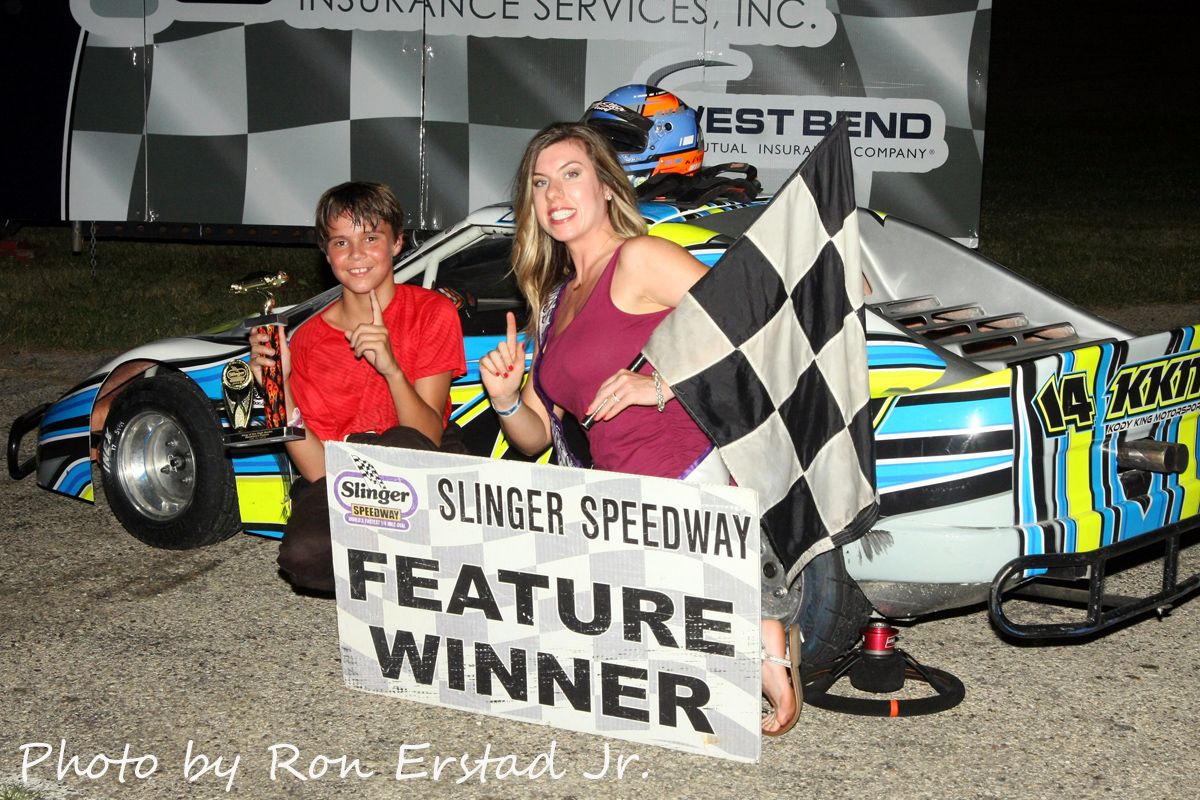 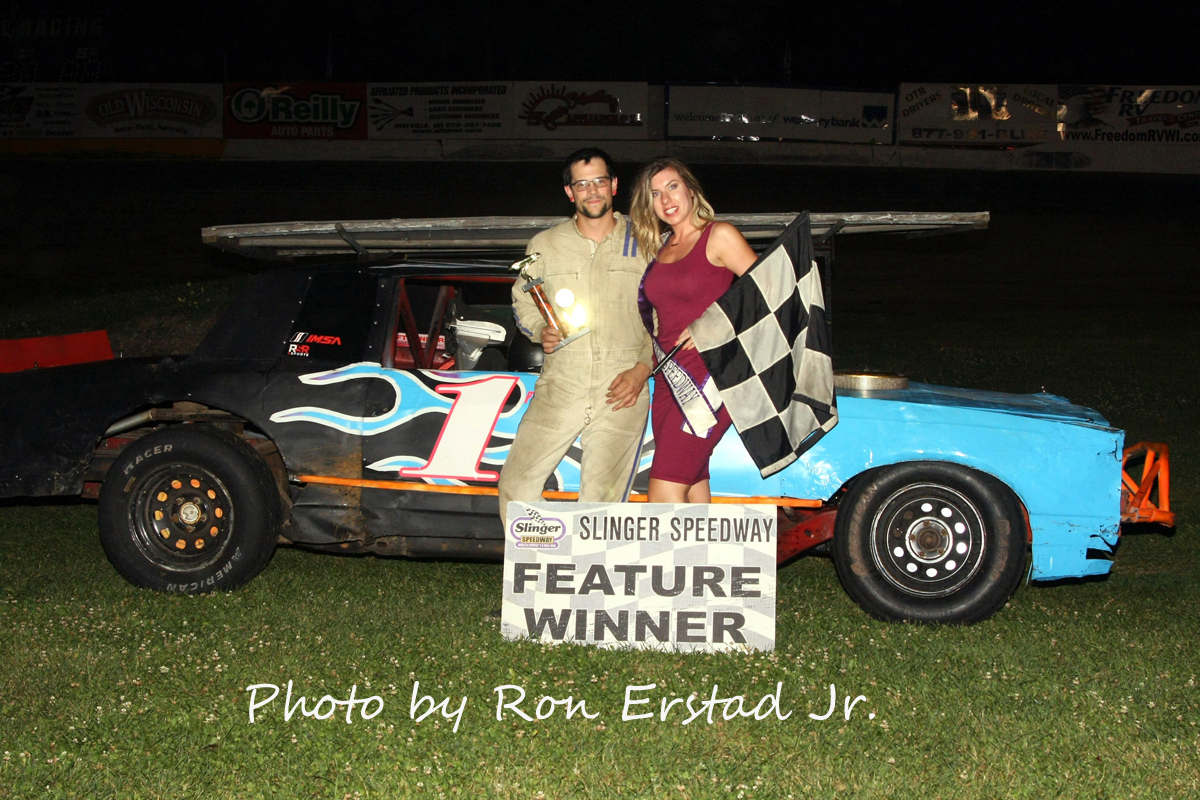