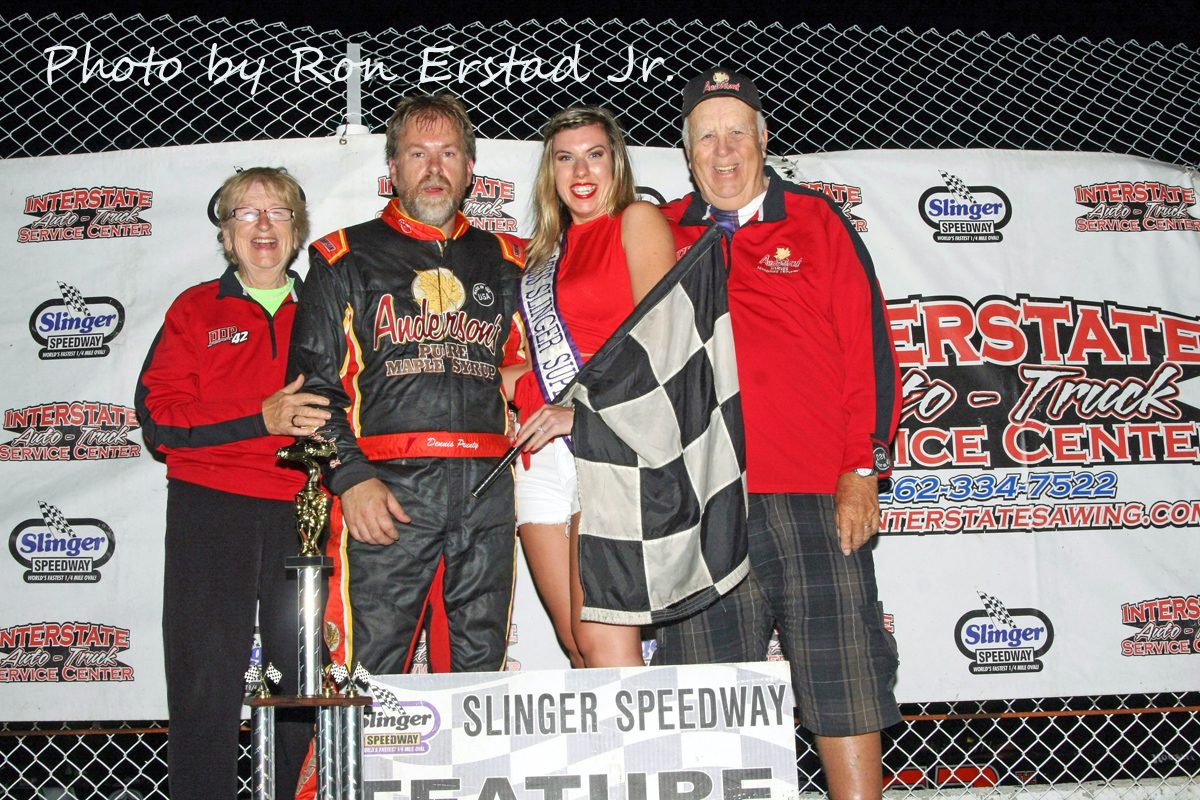 “I just wanted to stay slow so Gary (LaMonte) doesn’t know how fast I am for the (Slinger) Nationals,” Prunty said as he worked the crowd from victory lane after held off LaMonte in an aggressive late race battle.

“I’ve got to thank the crew,” Prunty continued, “We went to Ohio (Toledo) and it was hot and everybody lost a lot of weight but they did a good job turning this car around and getting it ready and if it wasn’t for Anderson’s Pure Maple Syrup, I wouldn’t have the energy to do this.”

“That was probably the best long range car we’ve had all year,” LaMonte stated after his runner-up finish, “We were a little bit better than Dennis (Prunty) there at the end and he was running a little bit wide and we tried to get him on the outside but lapped traffic didn’t help. He was a little loose and I was wide open, he knows why he got loose and why he got hit, it’s no big deal.”

“We’ll take second and we don’t have any damage before the (Slinger) Nationals, “ LaMonte continued, “We’ve got a great shot at a great run in the Slinger Nationals.”

John DeAngelis and Conrad Morgan led the field to the green and they battled side by side for the lead for the opening lap before Morgan edged ahead from the outside groove. Chris Blawat also used the outside to advance into second place while Alex Prunty, and Gary LaMonte battled DeAngelis for third. While Blawat began to track down Morgan out front, Alex Prunty and LaMonte worked their way around DeAngelis and into third and fourth respectively while Grant Griesbach and Dennis Prunty battled just outside the top five. Blawat was able to use the inside lane to sweep by Morgan for the lead on lap 14 just before the first caution flag waved on lap 15 when Tim Lampman had a tire go down which forced him into the turn one wall. Blawat chose the outside lane for the restart and maintained the top spot while Alex Prunty, Gary LaMonte, and Dennis Prunty all were able to advance forward and drop Morgan back to fifth. Following a quick caution on lap 22 when John DeAngelis experienced problems and stopped in turn two, Alex Prunty closed in on Blawat for the lead and was able to pass by to take the top spot on lap 24 while Dennis Prunty and LaMonte remained door to door right behind the top two. Alex Prunty was able to fend off any challenges Blawat tried from the outside but in the process, opened up the inside lane and Dennis Prunty took advantage as he grabbed the lead on lap 28. LaMonte followed Dennis Prunty on the inside and a few laps later was able to wrestle second place from Alex Prunty. LaMonte whittled away Dennis Prunty’s lead during the second half of the race and with fifteen laps to go was right on Prunty’s rear bumper. LaMonte let Prunty know he was there as he applied a few bumper taps as Prunty’s car swung loose off the turns but each time Prunty was able to power off the corner just enough to maintain the lead. The leaders worked lapped traffic over the final laps as Dennis Prunty held off LaMonte’s challenges and he drove to his fourth super late model feature victory of the season. Alex Prunty finished a strong third while Brad Kossow finished a very respectable fourth after starting at the back of the field. Chric Blawat finished fifth.

Super late model heat races were won by Brad Kossow, John DeAngelis, and Alex Prunty while Dennis Prunty was the fastest qualifier after touring the speedway in 11.337 seconds.

Jack Stern muscled his way past Shaun Scheel with two laps to go to win the 40-lap late model feature.

Jakob Hassler and Jacob Nottestad led the field to the green and Hassler quickly established himself as the leader over Nottestad while Kyle Chwala, Jack Stern, and Shaun Scheel joined the lead pack. The first caution flag waved on lap 13 when E.J. Waldron’s car stopped after experiencing a flat tire as Hassler led over Chwala, Stern, Nottestad, and Scheel. Hassler maintained the lead on the restart as the yellow flag flew again two laps later for an incident between Nick Roehl and Zach Braun. Hassler again kept the lead as racing resumed while behind him, Scheel wrestled second away from Chwala and Stern followed in his tire tracks to take over third place as Chwala slotted into fourth. Hassler had built up a comfortable lead which evaporated following a lap 31 caution for a two car incident in turn four. This time on the restart, Hassler’s car kicked loose off turn two and he lost several positions as he regained control, allowing Scheel to advance to the lead with Stern right behind him. With two laps to go, Stern was able to root his way around Scheel off turn four to take the lead and he drove to the victory. Scheel had to settle for second while Chwala finished third. Jakob Hassler recovered to finish fourth while Al Stippich took the checkered flag in fifth.

Late model heat races were won by Nick Roehl and Kyle Chwala and Ryan Gutknecht set fast time with a lap of 12.180 seconds. 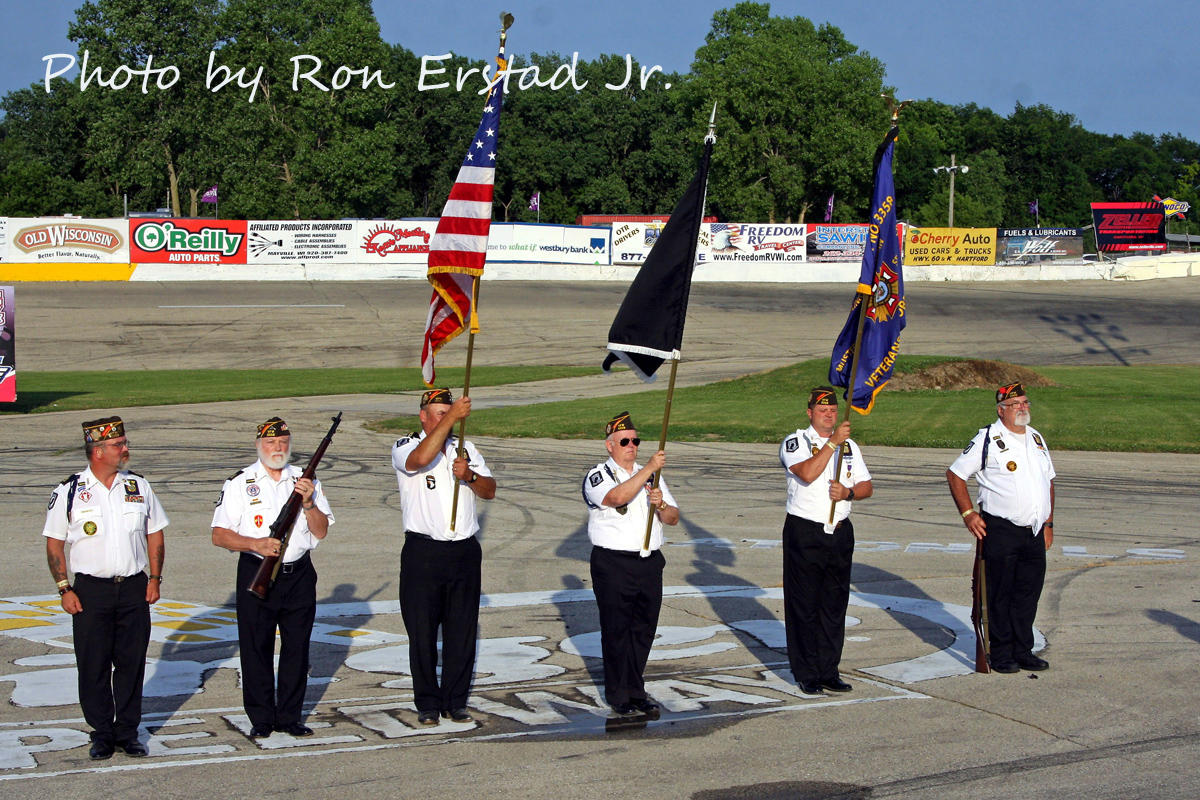 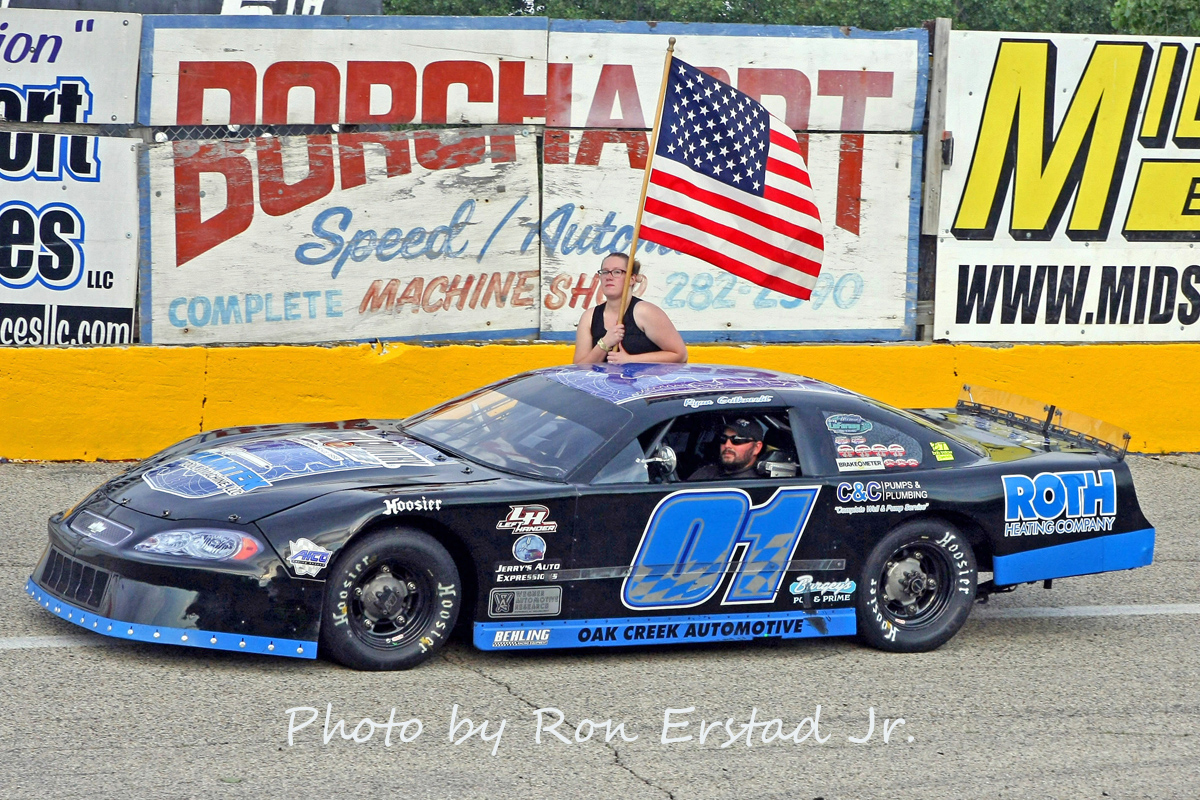 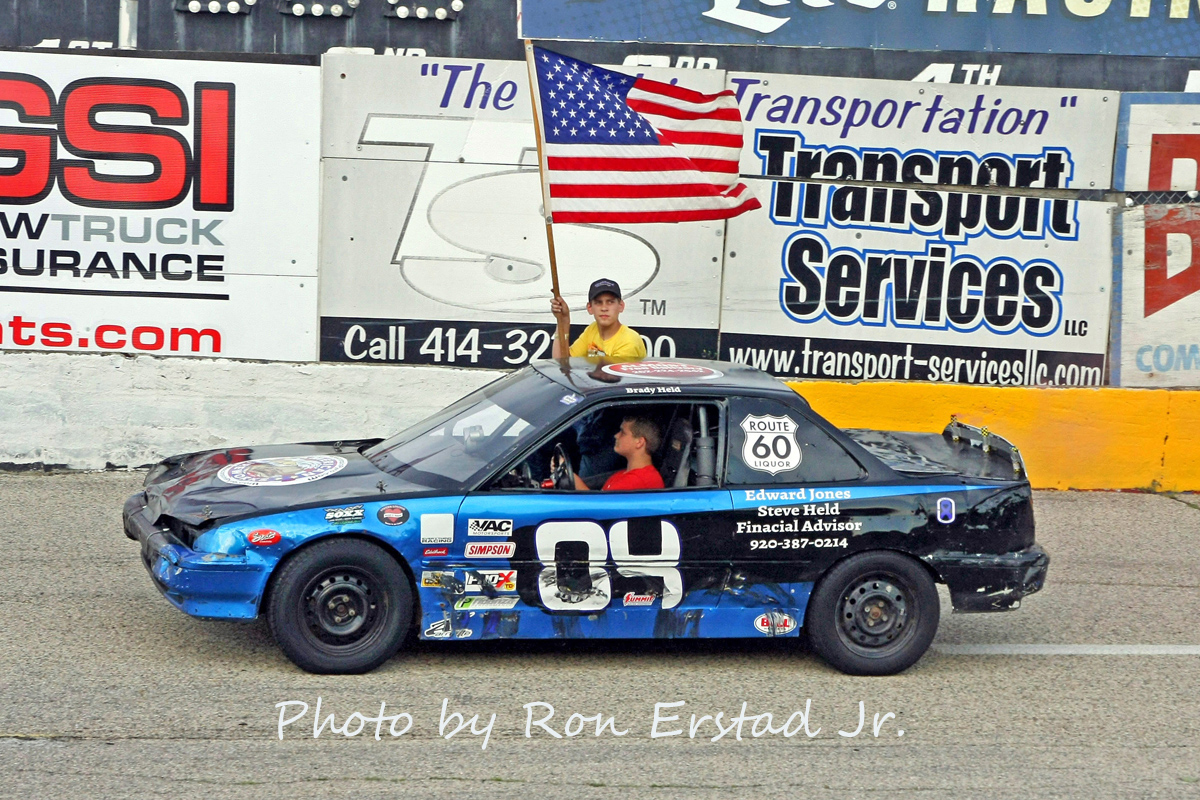 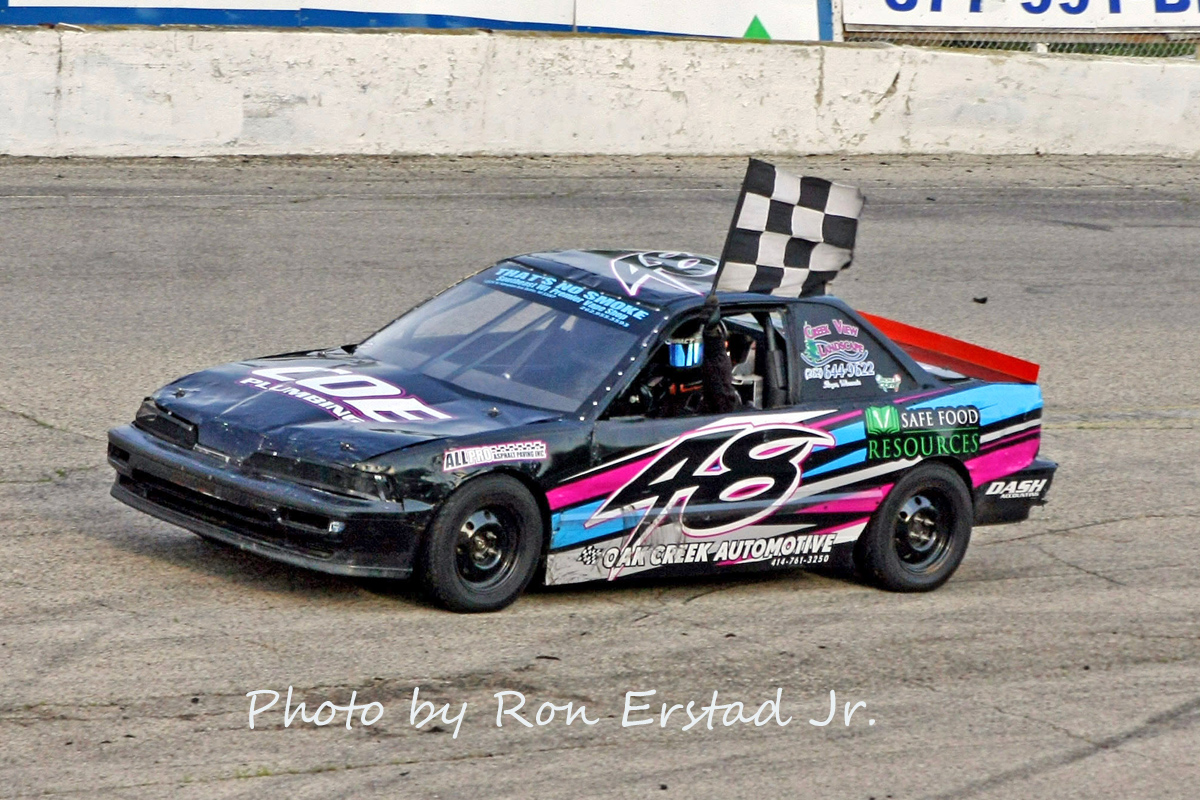 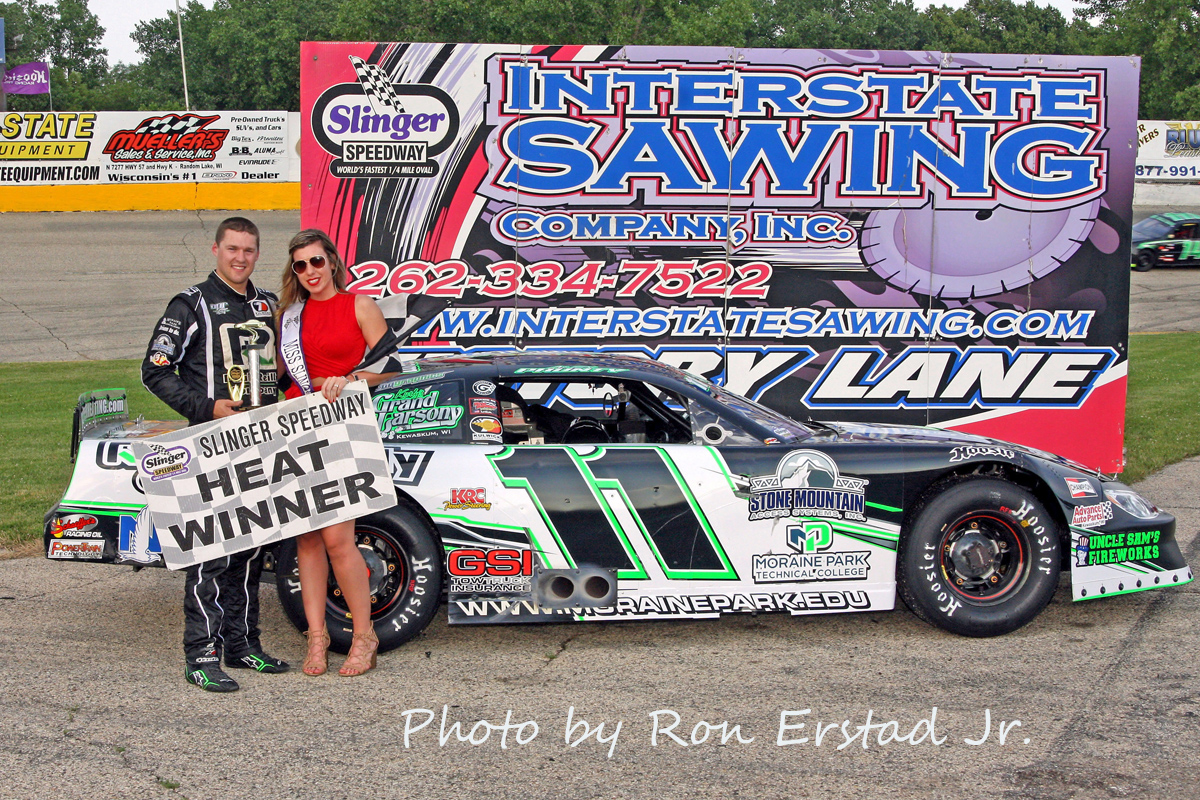 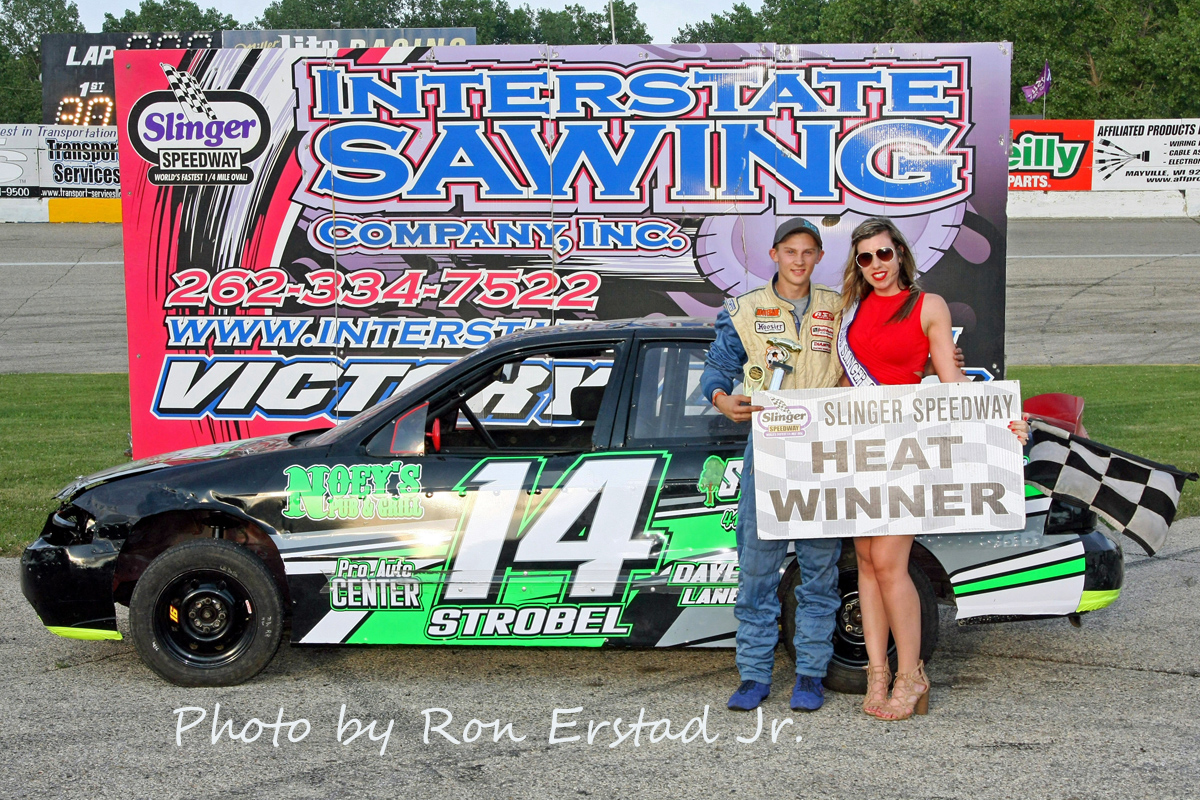 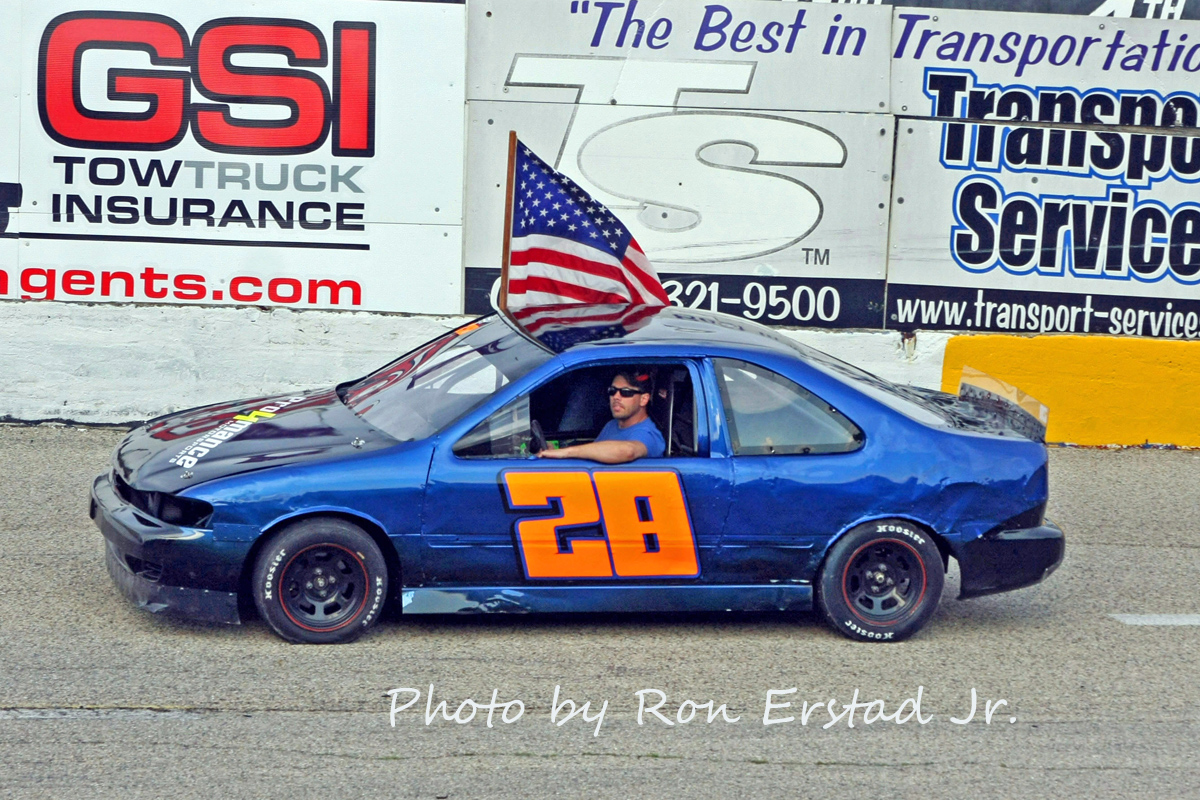 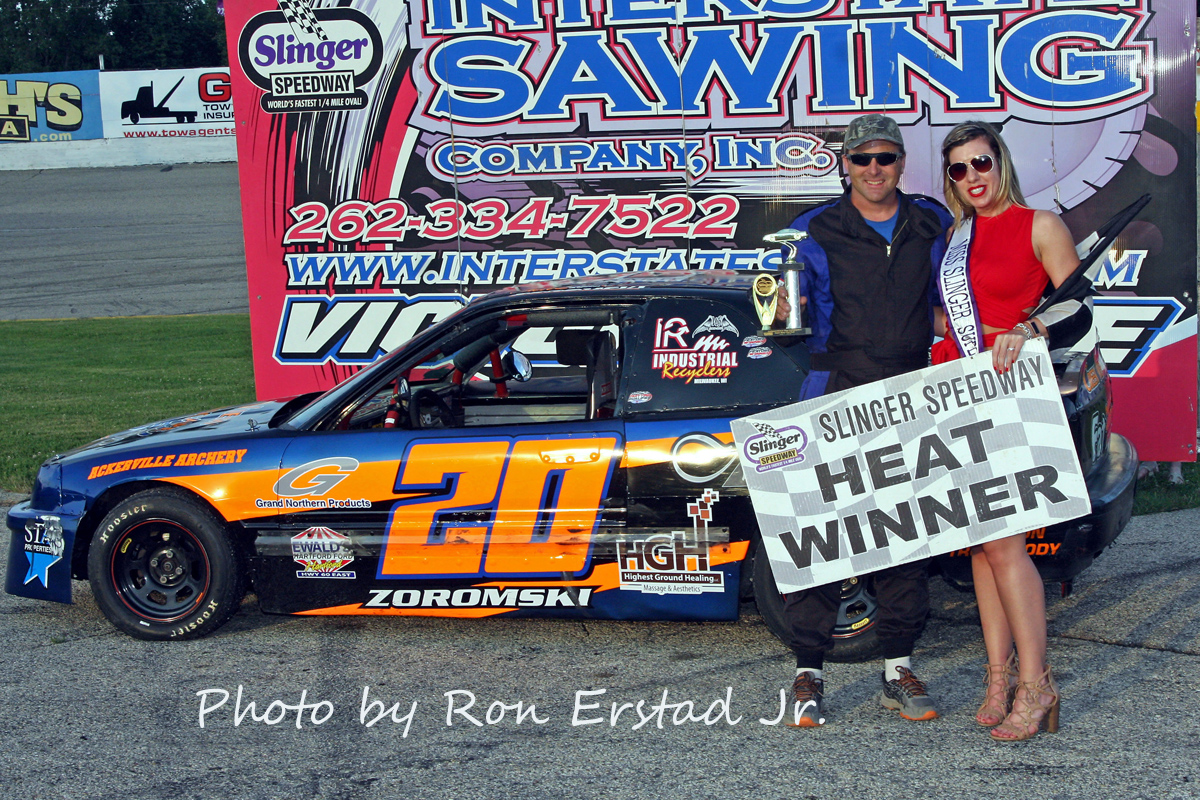 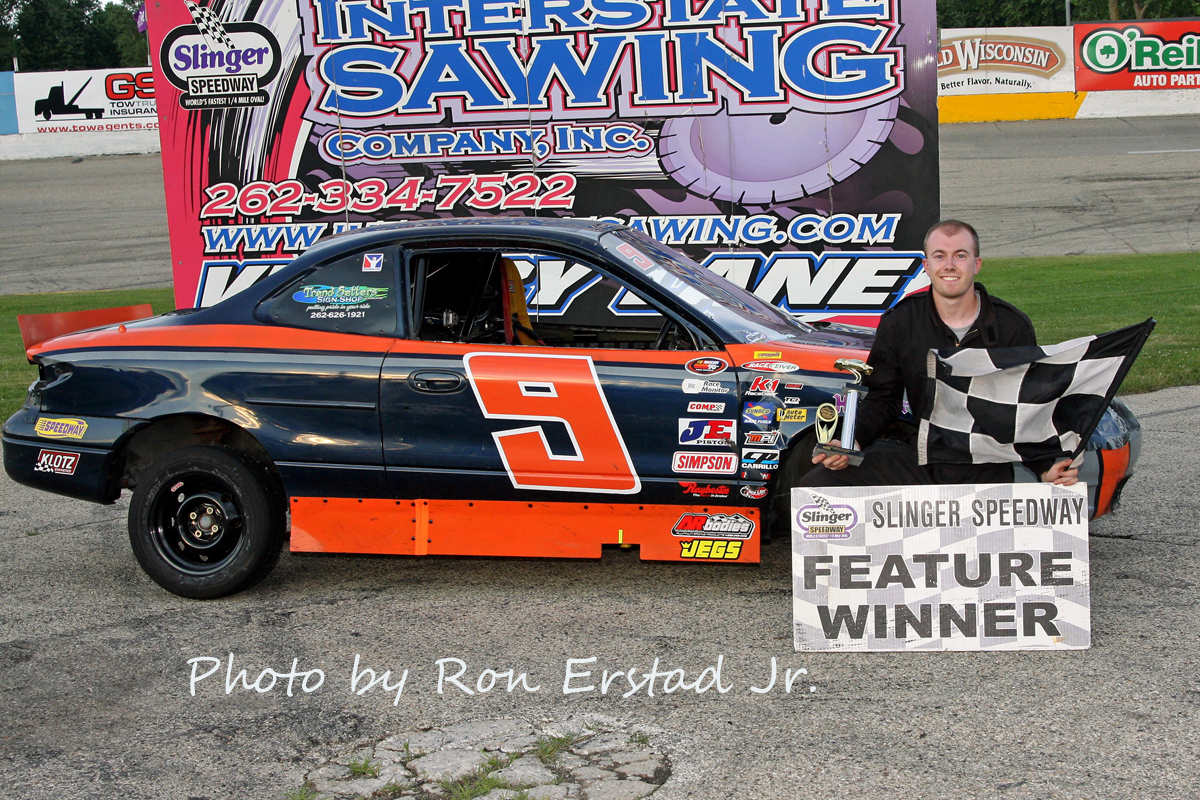 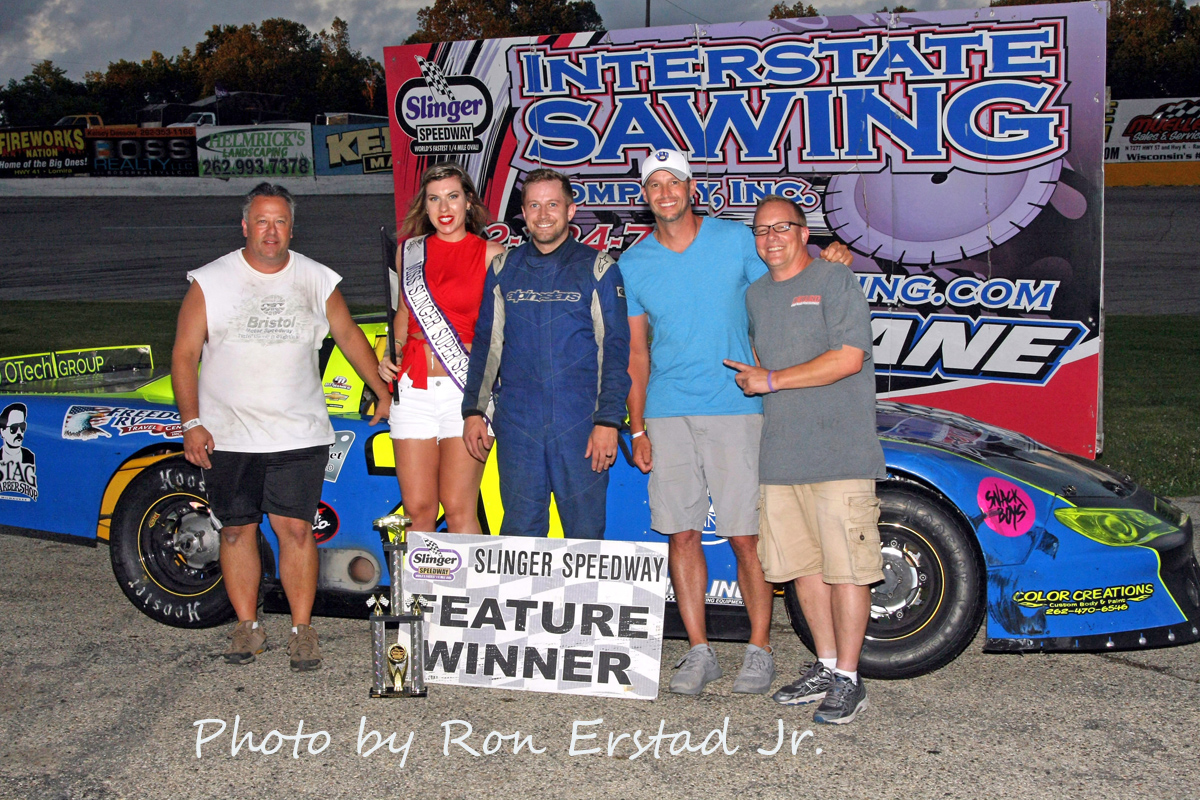 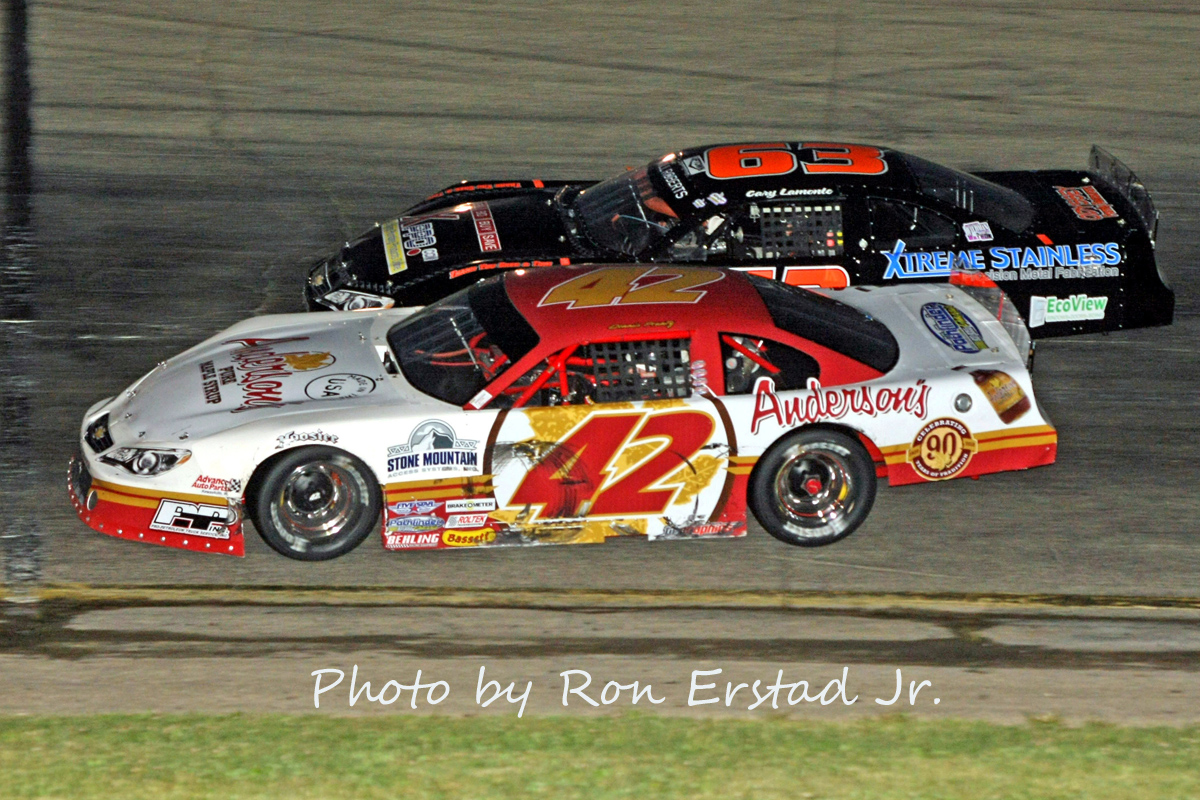 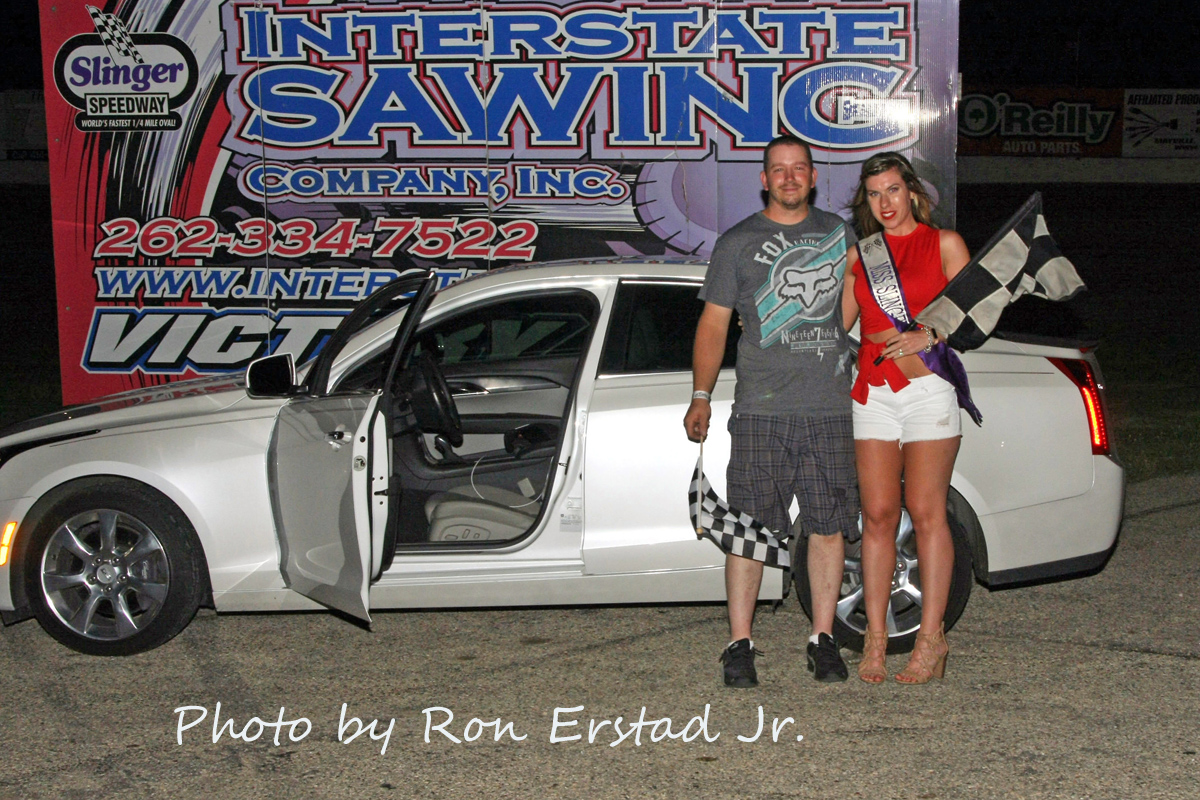 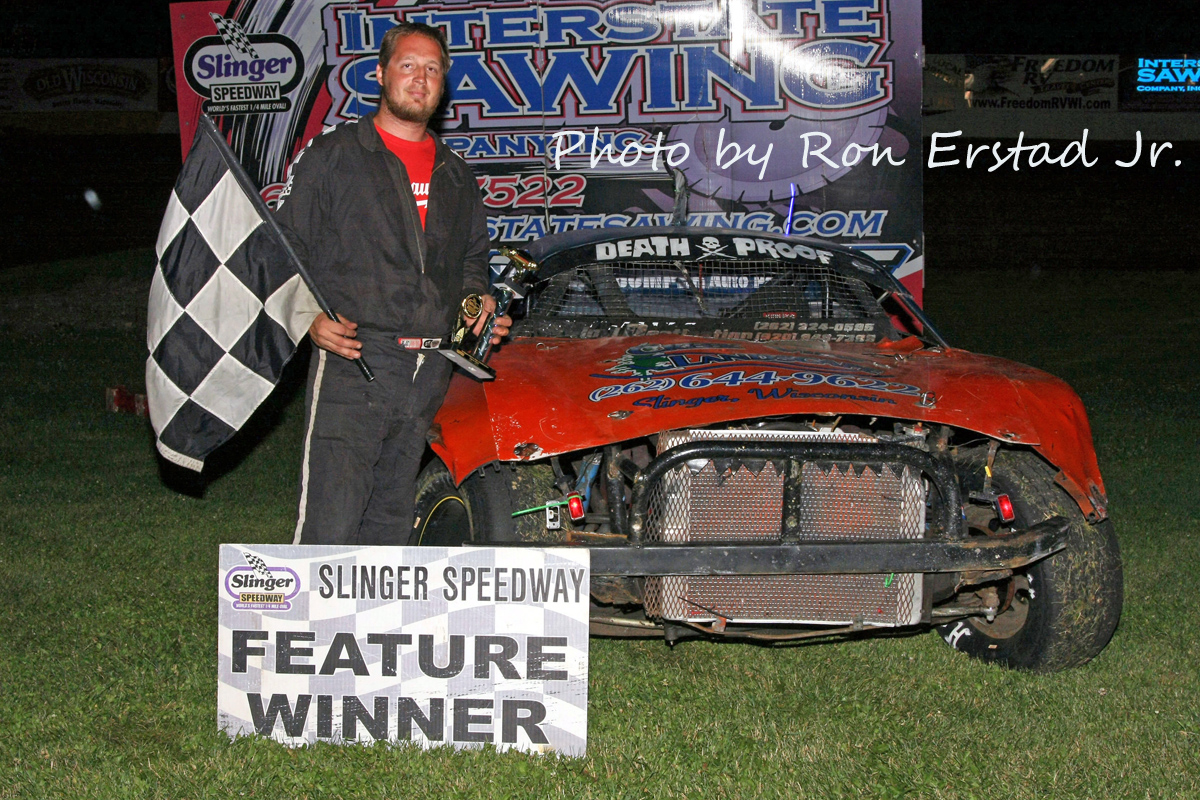