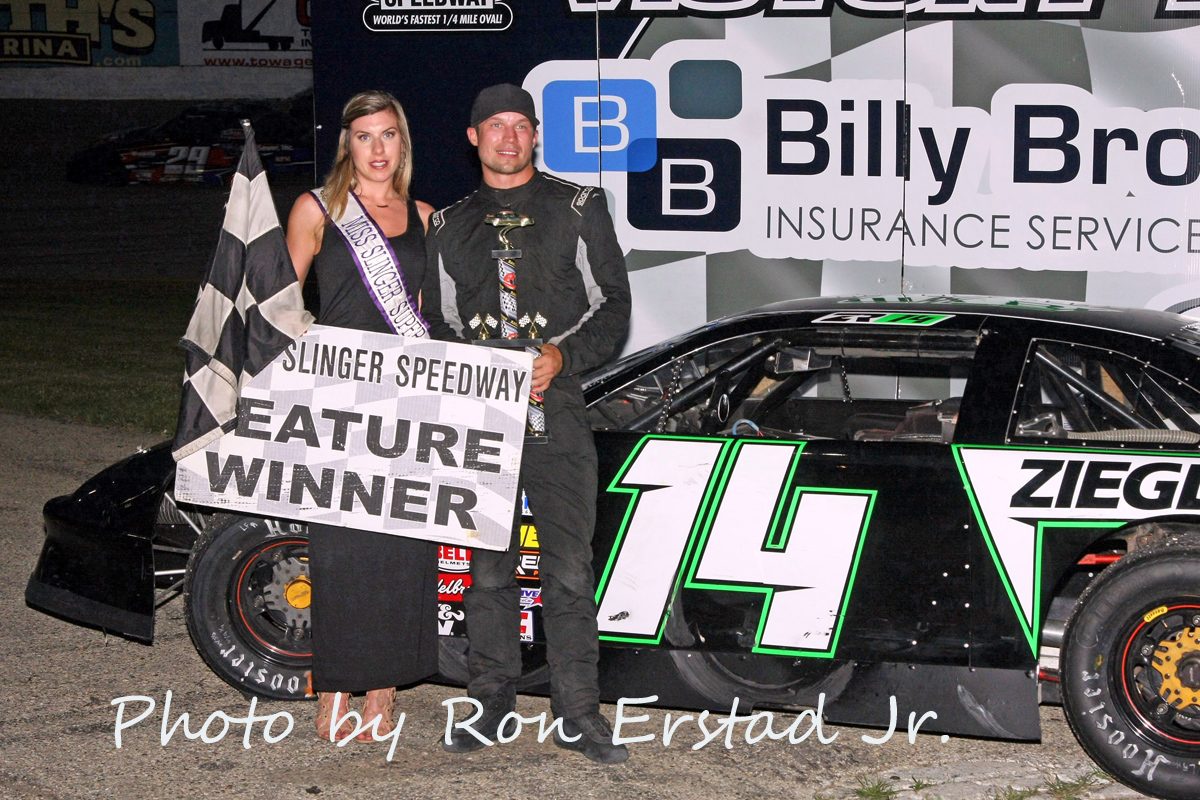 “Tonight we were able to hit it,” Riddle said from victory lane, “I had a good car and wasn’t sure if I could make it work and kind of backed down to save some tires and I knew Shaun (Scheel) saved some too for a restart, but I just took off again and it worked out.”

“It took a little bit to knock some rust off and get back in the groove here,” Riddle continued, “But as soon as we got it I think we were good.”
“I could tell early he (Riddle) was pretty fast and would be hard to beat,” Scheel stated after his runner-up finish, “I was hoping I could hold him on the outside for a while but he was definitely fast and it was fun racing with him tonight.”

R.J. Braun and Tom Jasinski led the field to the green flag and Braun powered out to the early lead while Jerry Mueller slotted into second directly in front of Jasinski and Brian Holtz. Mueller’s car washed up the track exiting turn four and Holtz quickly dove to the inside creating a three-wide situation with Mueller sandwiched between Holtz and Jasinski. The speedway has a safety rule against three wide racing in the division and Holtz was issued the black flag a lap later after failing to give back the position. The cars of Mueller and E.J. Waldron made contact entering turn one on lap five and as Mueller attempted to exit the speedway, those behind him including Jakob Hassler and Zach Braun tangled in turn two to draw the caution flag. Braun chose the inside for the restart and as racing resumed, Shaun Scheel was able to keep pace from the outside and eventually take the top spot a few laps later. Zack Riddle was advancing forward and he grabbed second from Braun who slotted into third just ahead of Jasinski and Ryan Gutknecht. Smoke began to billow from Zach Braun’s car on lap 21 as he entered turn one and the caution flag waved again with Scheel leading over Riddle and Braun. Scheel chose the bottom lane for the restart and Riddle was able to keep pace using the top line as racing resumed. After making numerous unsuccessful attempts to unseat Scheel from the inside lane, Riddle stuck with the top side and was able to power by Scheel on lap 25. Riddle maintained his lead following another caution period on lap 27 when Jack Stern’s car experienced problems in turn four as Scheel continued to try to get by. Behind the lead duo, Braun and Gutknecht staged their own battle over third as Riddle continued to lead. Riddle could not be caught in the final laps and he drove to the victory over Scheel while a last lap attempt to take third by Braun resulted in him spinning in turn four as Gutknecht took the checkered flag in the third position. E.J. Waldron finished fourth after Braun’s mishap and Ryan Crane completed a very strong race with a fifth place result.

Stephen Scheel, Zach Braun, and Jack Stern each won late model heat races while Zack Riddle was the fastest qualifier after nearly edging the track record with a lap at 12.081 seconds.

Ryan Gutknecht won the 30-lap Midwest Sportsman feature after taking the lead on lap six when the Ryan Farrell and Kenny Joosten both experienced problems at the same time while running first and second. Gutknecht then held off Eric Lingford to capture the victory. Tom Elsinger finished third and Mitchell Haver was fourth. Brian Holtz finished fifth. Brian Holtz won the Midwest Sportsman heat race and Ryan Gutknecht was the fastest qualifier at 12.738 seconds.

Matt Urban held off Brandon Tackes to win the 25-lap Slinger Bee feature in a competitive event with the front cars tightly bunched. Brady Held finished a close third while Garrett Konrath took the checkered flag in fourth. Brandon Berens was fifth. Slinger Bee heat races were won by Al Strobel and Brandon Berens while Tom Elsinger Jr. was the fastest qualifier with a lap at 15.291 seconds.

Rick Bruskiewicz won the thrilling Figure 8 race that was red flagged and declared official when Scott Goetzke and Ryan Lovald collided in the “X” on the final lap. Both drivers exited their vehicles uninjured. 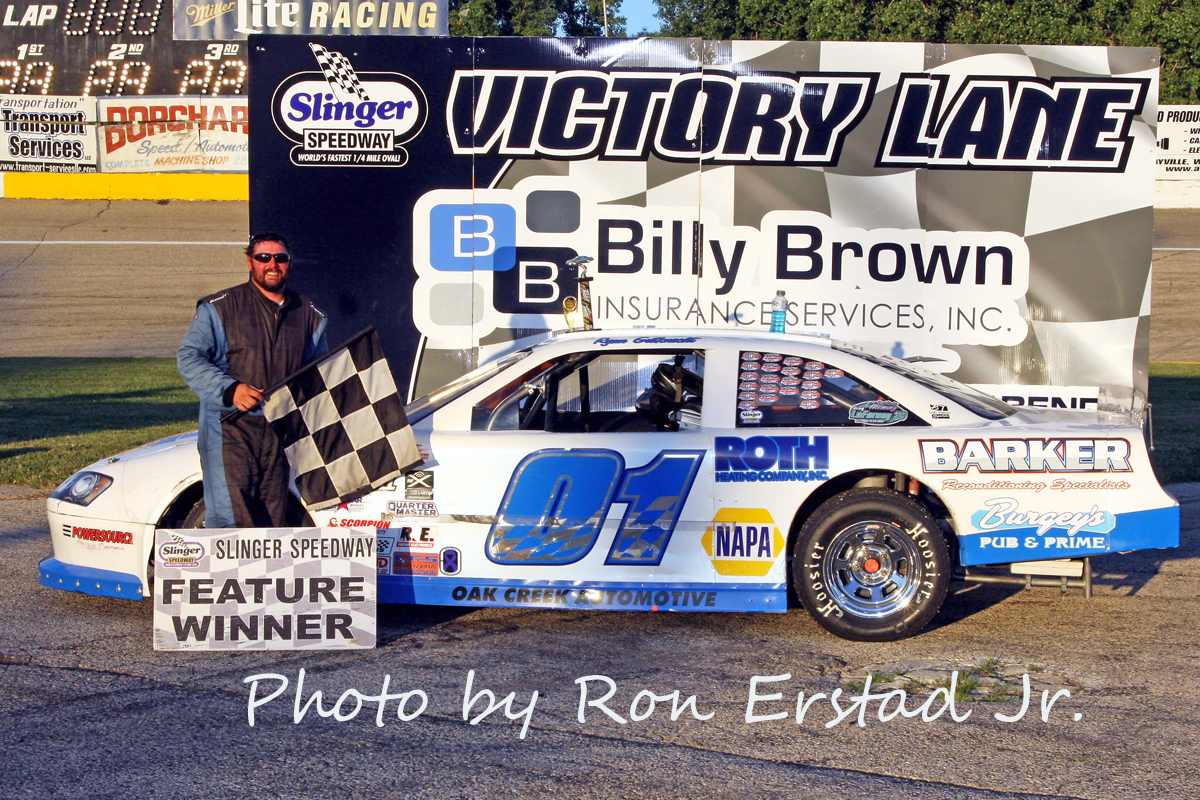 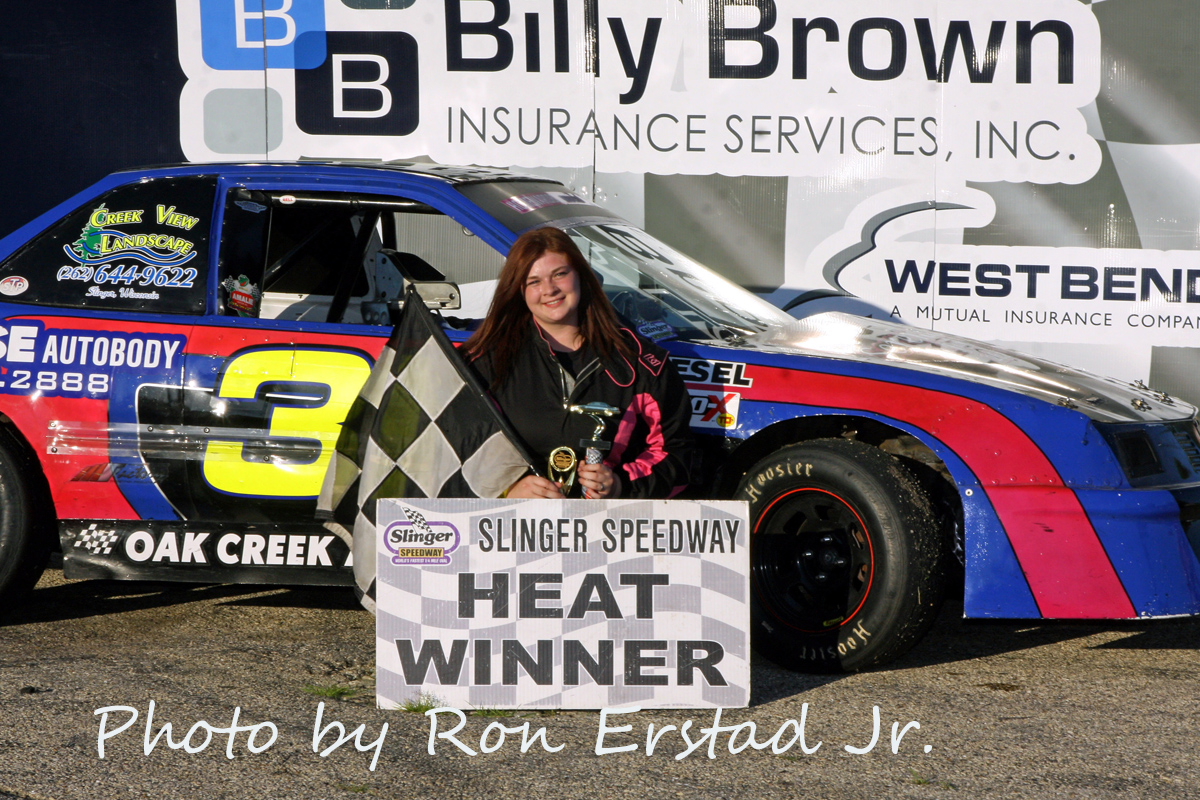 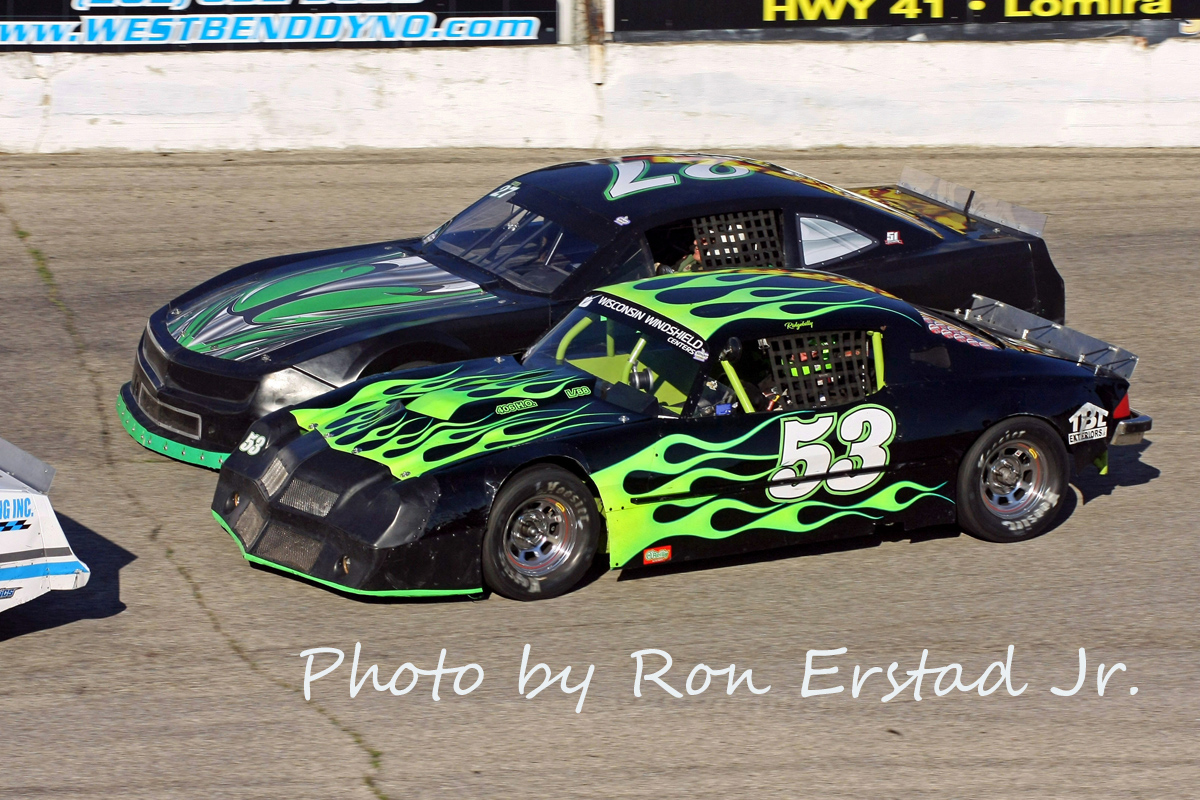 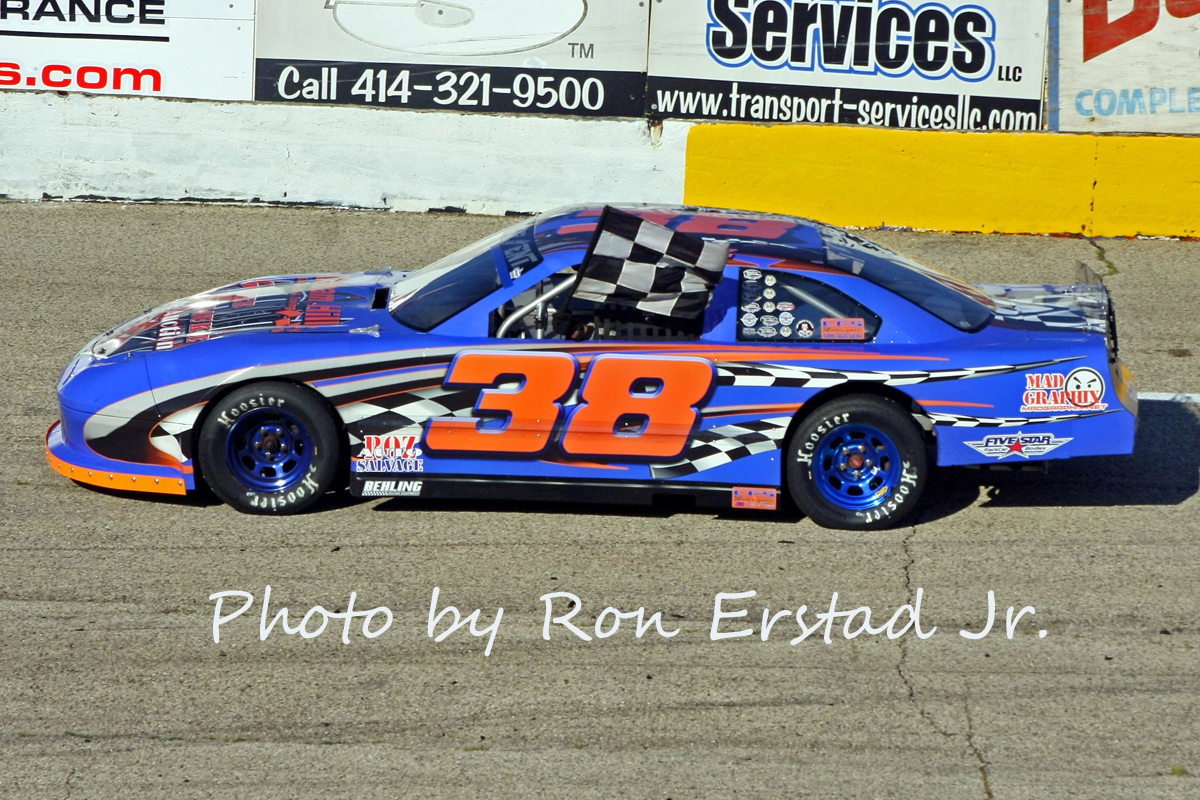 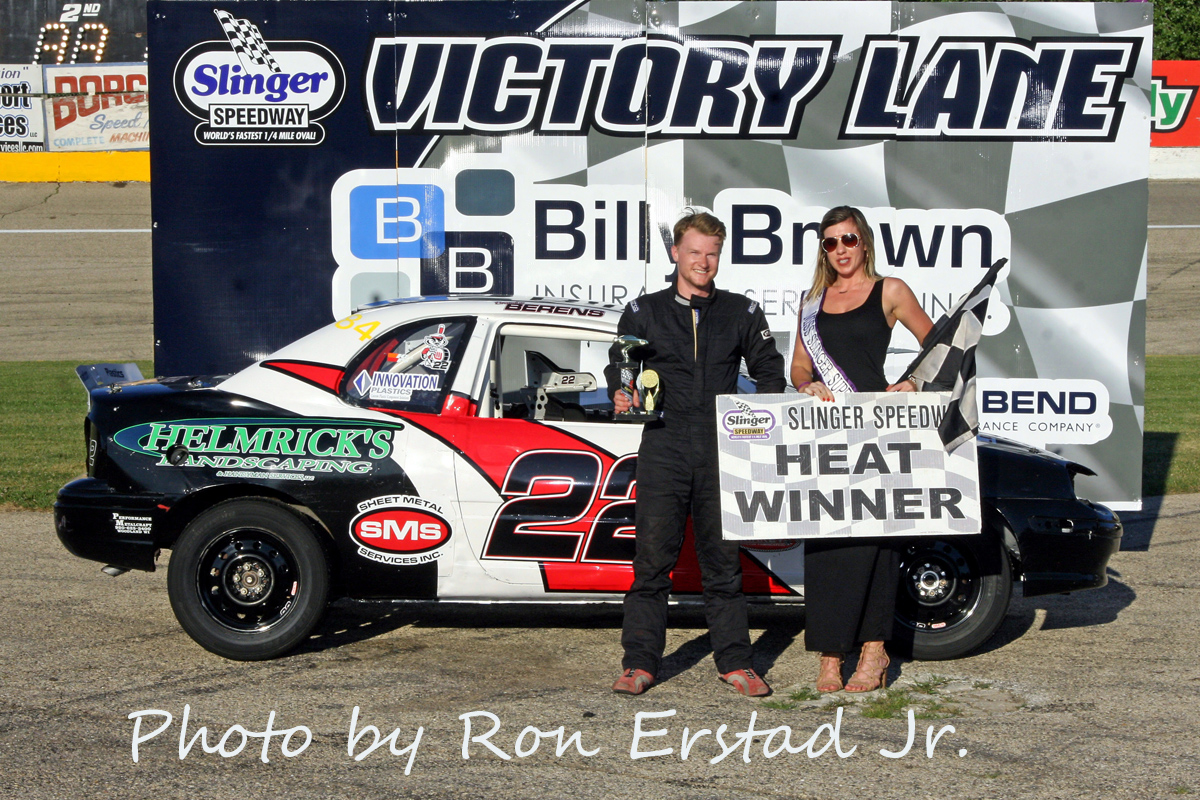 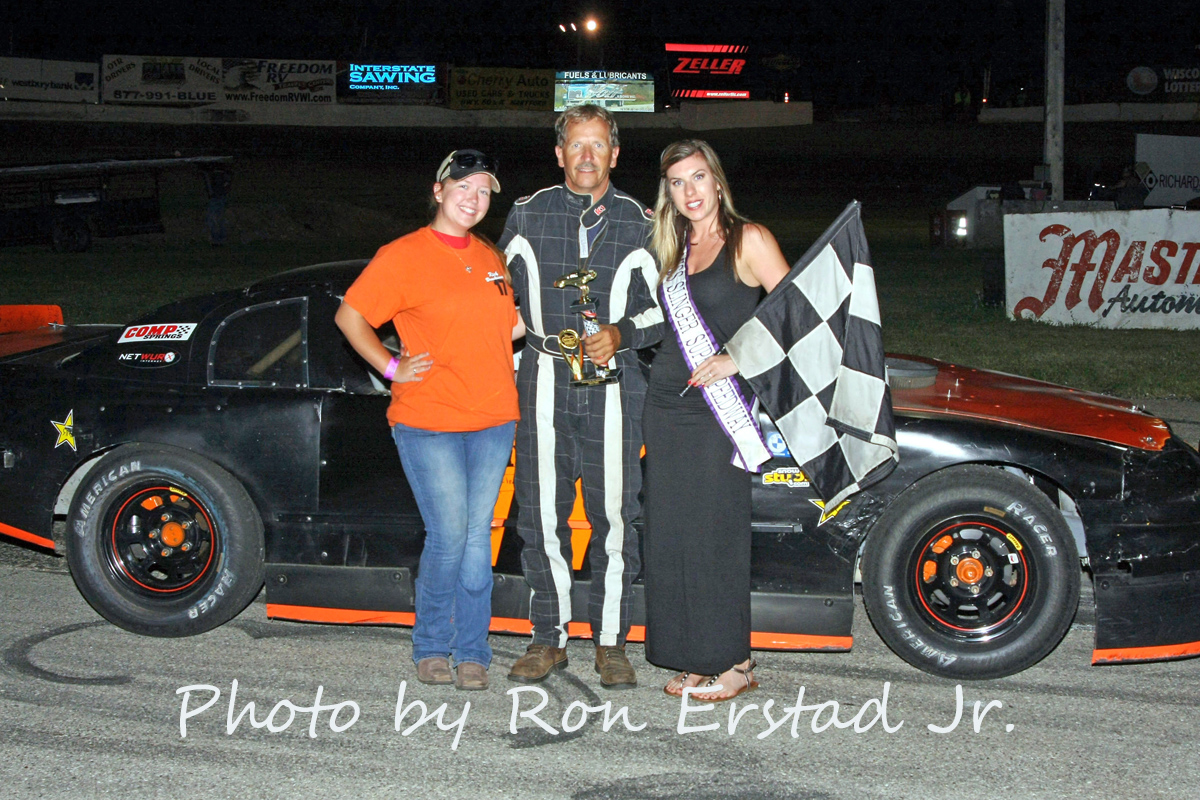 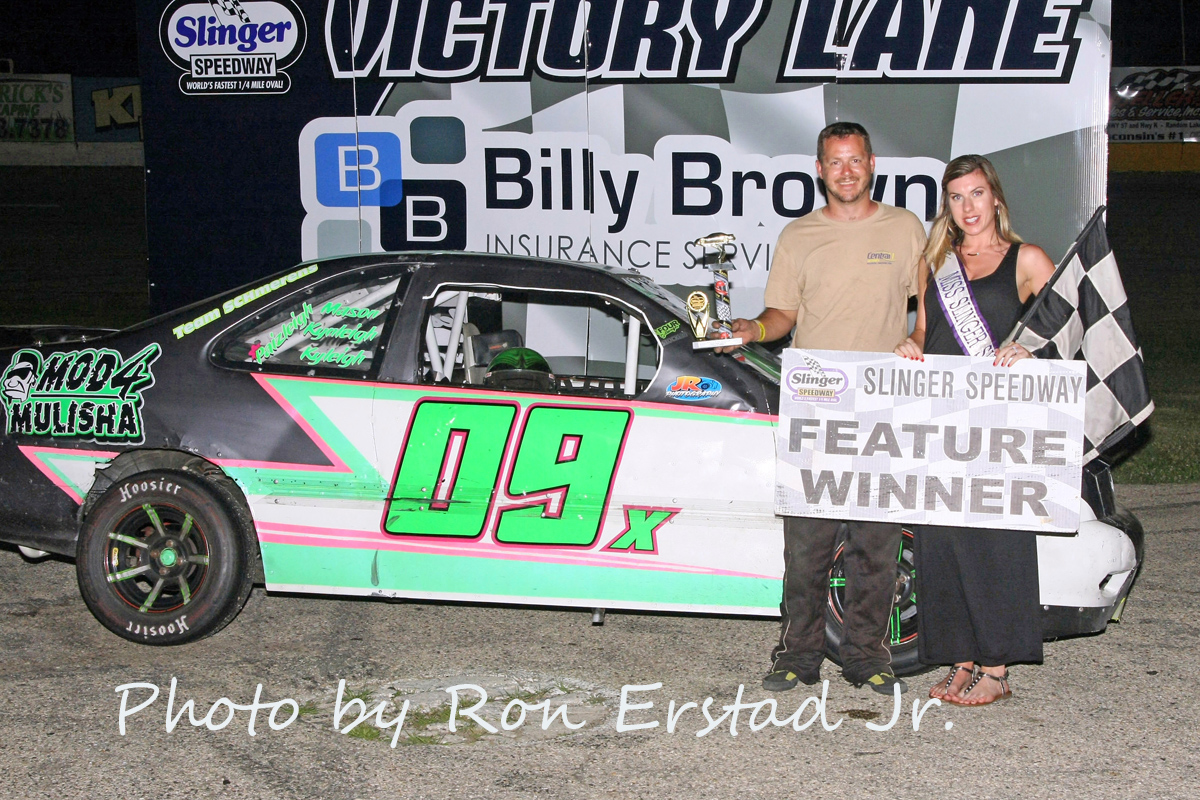 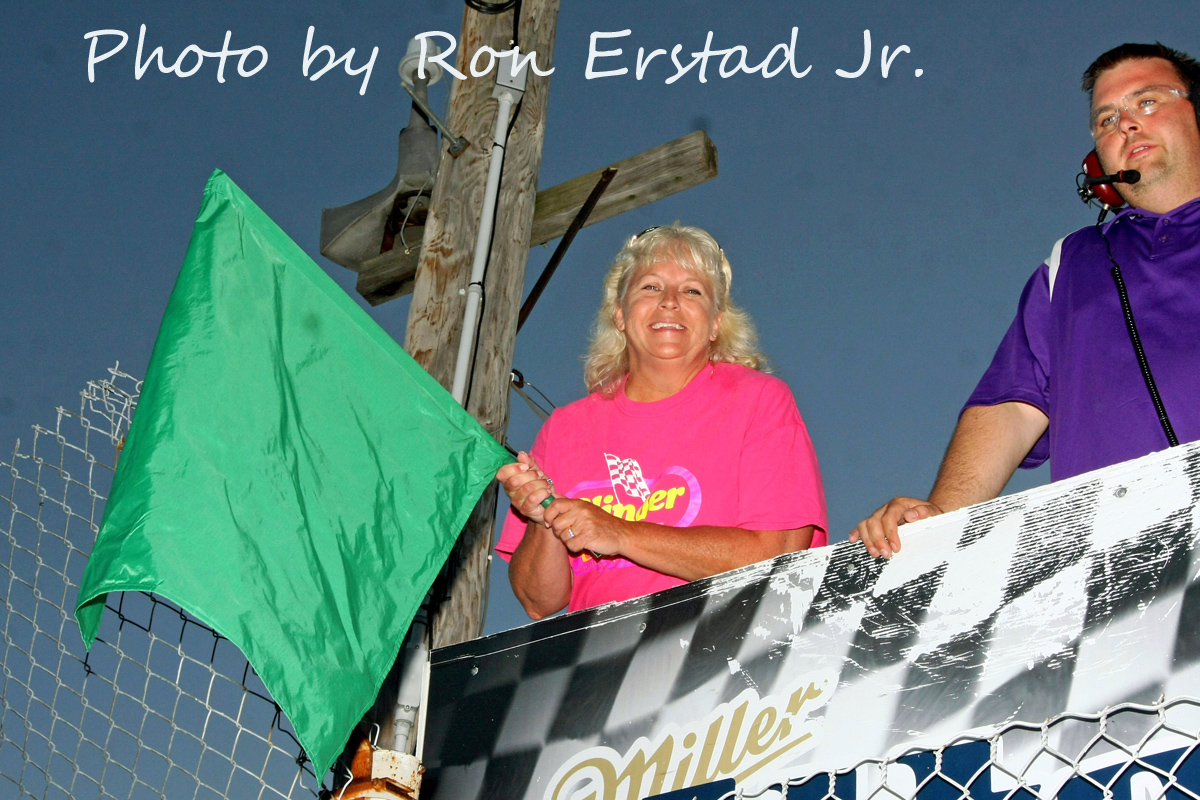 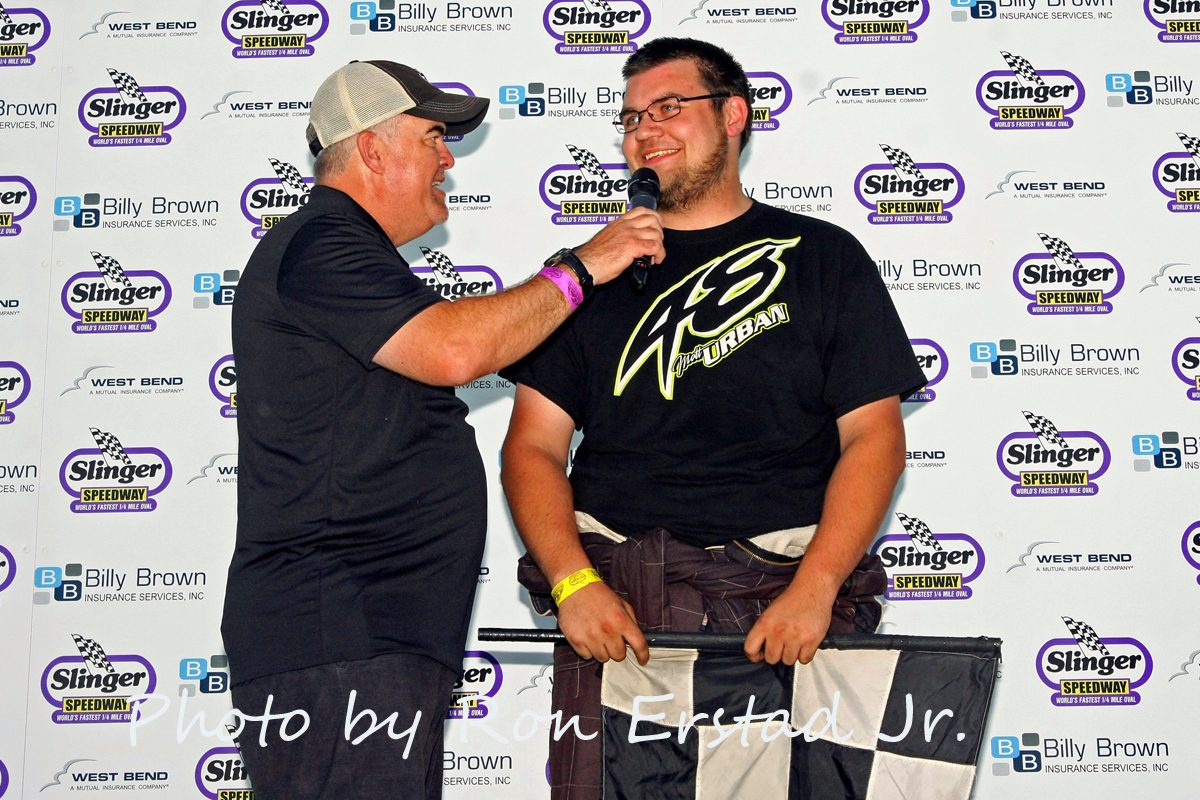 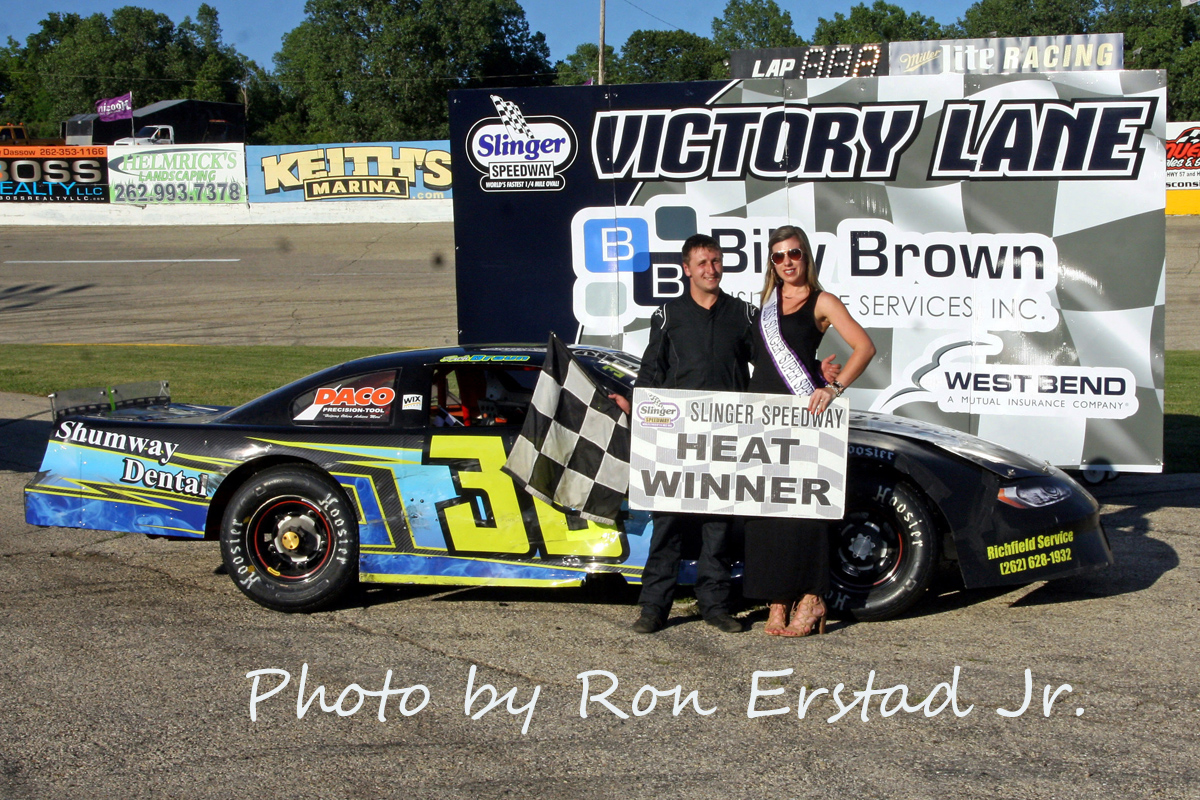 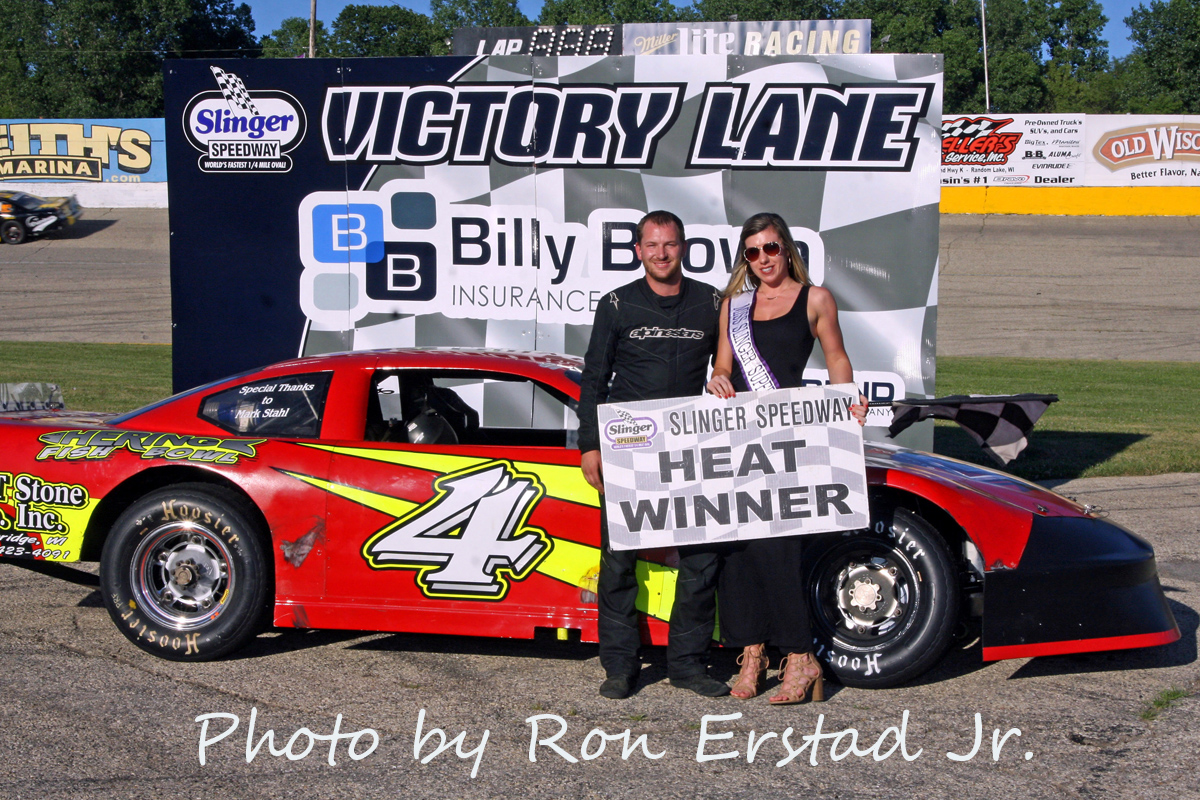 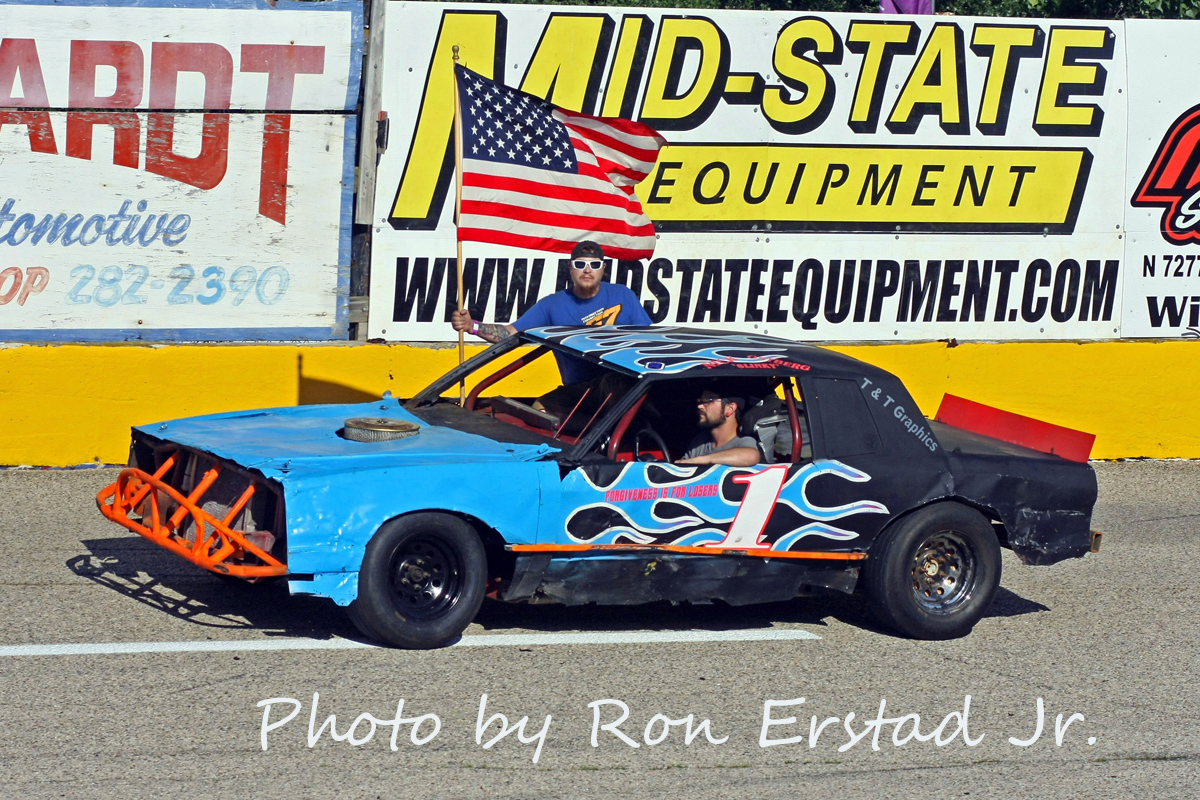 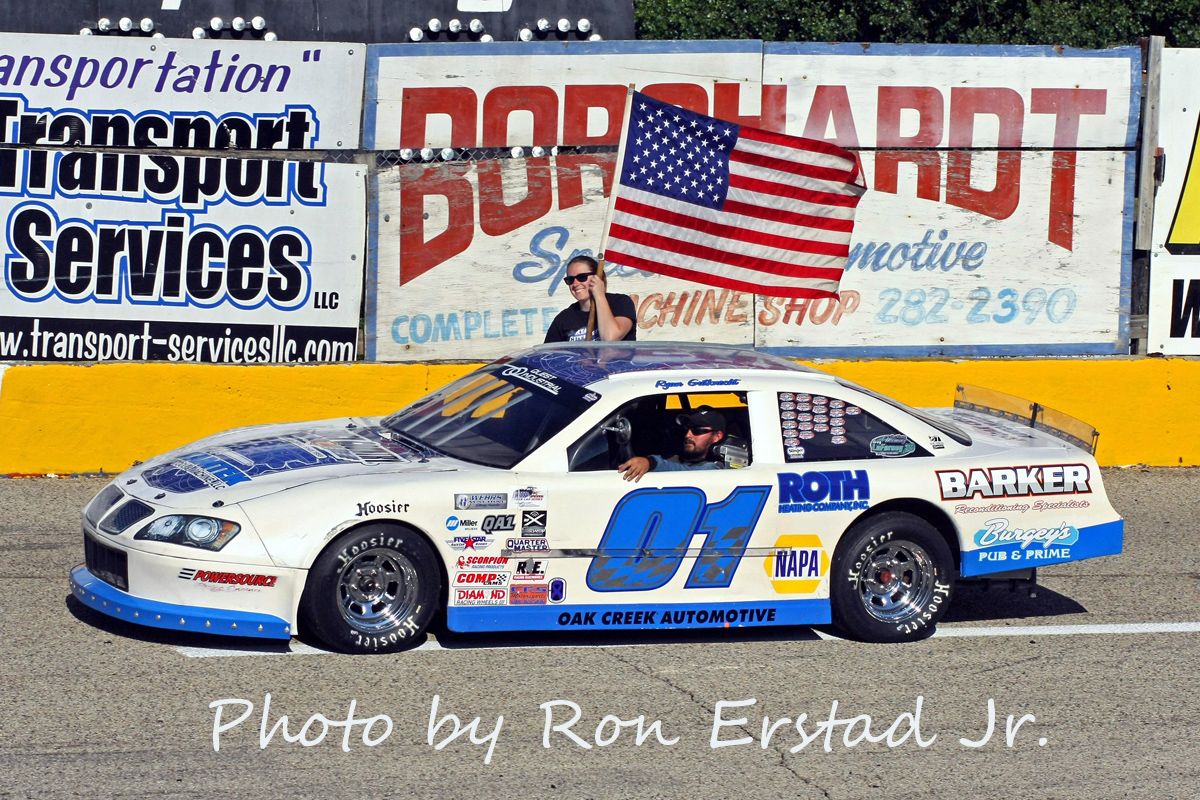 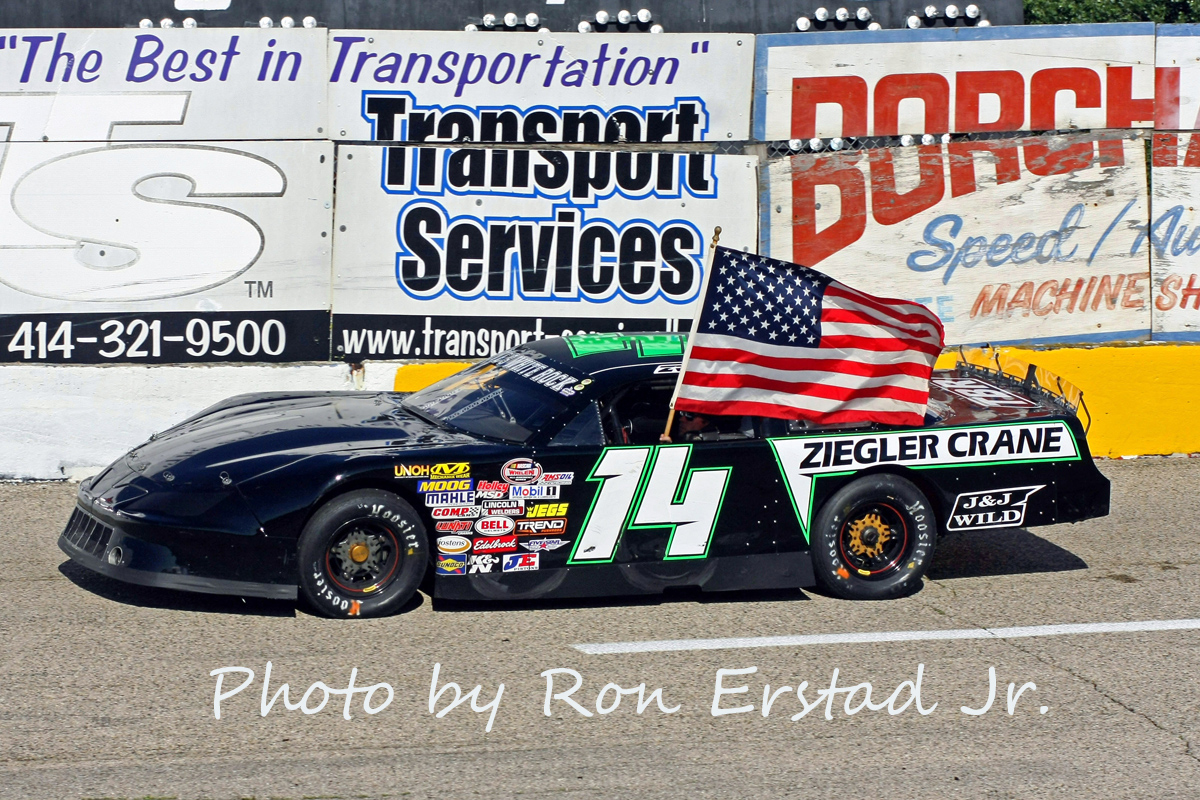