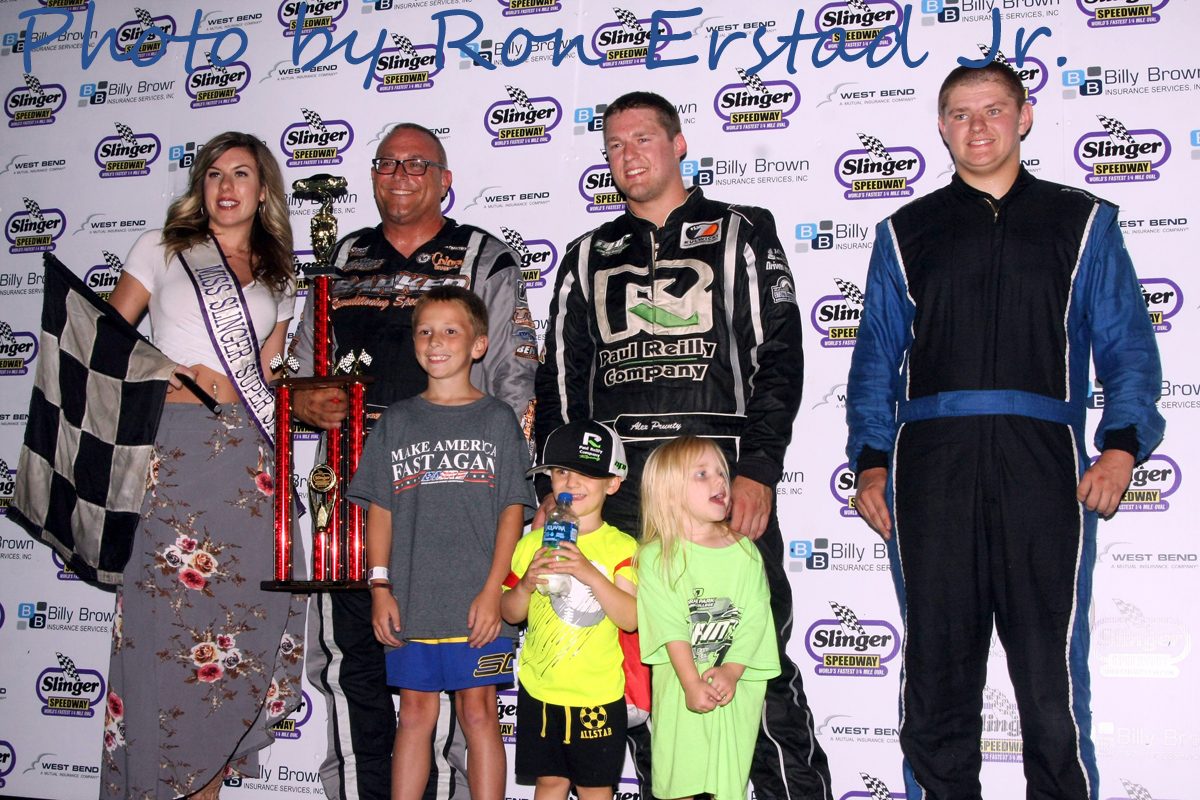 Slinger, Wis., Aug 12- Brad Mueller captured his second super late model feature victory of the season in dominating fashion Sunday night at the Slinger Super Speedway as he led all but three laps of the 60-lap event.

“It was a great car,” Mueller told the crowd afterward, “The crew and I worked on it this week and made a couple of changes and the changes we made were pretty good and It feels pretty good to be in victory lane. ”

While no one seemed to have anything for Mueller, Alex Prunty made it interesting at the end as he closed to Mueller’s bumper in the waning laps as the leaders worked lapped traffic to finish second and take over the championship point lead in the process.

“I have to thank my team for coming out here and practicing this week,” Prunty stated, “We’re trying to get this thing better and better and it’s one of those never stop learning deals.’

“It’s cool to take over the point lead,” Prunty continued, “We’re looking forward to a couple of good weeks here and hopefully we’ll end up in victory lane a couple more times..”

While Mueller and Prunty were stabilized in the top two positions for most of the race, the best battle on the track was between Grant Griesbach and Brad Keith who raced side by side many laps for third before Griesbach edged ahead at the finish.

“It was good racing with him (Keith) and he raced me clean,” Griesbach said, “We had very minimal contact racing side by side for twenty plus laps.”

“I thought we were as good as the top two,” Griesbach continued, “But racing side by side slowed us down and we didn’t get a yellow to help us. It seems like when you need the cautions you don’t get them and when you don’t want them you get them.”

Brad Keith completed another strong race with a respectable fourth place finish and Nick Wagner also capped off a good run with a fifth place result. Conrad Morgan finished sixth followed by Chris Blawat and Rich Loch in seventh and eighth respectively while Jeff Holtz and Mike Egan rounded out the top ten.

Super late model heat races were won by Mike Egan and Chris Blawat and Brad Keith was the fastest qualifier after clocking in at 11.295 seconds.
Ryan Gutknecht took the lead of the 40-lap late model feature just before the halfway mark and went on to capture the victory.

The event had a rocky beginning as after the first lap was completed front row starters Nick Roehl and Danny Heying tangled in turn one as both spun to the wall in turn two. Al Stippich took command as racing resumed while E.J. Waldron, Brian Holtz, and Gutknecht gave chase. Waldron was able to dispatch Stippich from the top spot on lap six, just before the race was slowed by another caution flag on lap seven when Shaun Scheel and Jakob Hassler tangled in turn three. Waldron led on the restart as Holtz and Gutknecht went to work on Stippich for position, eventually taking the second and third spots a few laps later. Gutknecht then tracked down Waldron for the lead, completing the pass just prior to the halfway point. A final caution flag on lap 33 set up a seven lap dash to the finish with Gutknecht leading over Waldron, Holtz, and Steven Schulz. Gutknecht would not be denied over the final laps and he drove to the victory leaving Waldron and Holtz to settle for second and third respectively. Shaun Scheel and Jakob Hassler rebounded from their earlier incident to finish fourth and fifth.

Garrett Konrath won the 25-lap Slinger Bees feature over Brady Held and Ricky Gebhardt. Zach Greer finished fourth and Brandon Mennicke was fifth. The event was stopped under the red flag twice, once for a roll over incident involving J. D Rudser and again for a hard hit off the fourth turn for Matt Urban. All drivers exited their cars uninjured. Marty Tackes and J.D. Rudser each won a Slinger Bee heat race and Garrett Konrath was the fastest qualifier with a lap at 15.222 seconds. Rick Bruskiewicz held off Ryan Lovald to win the Figure 8 event. 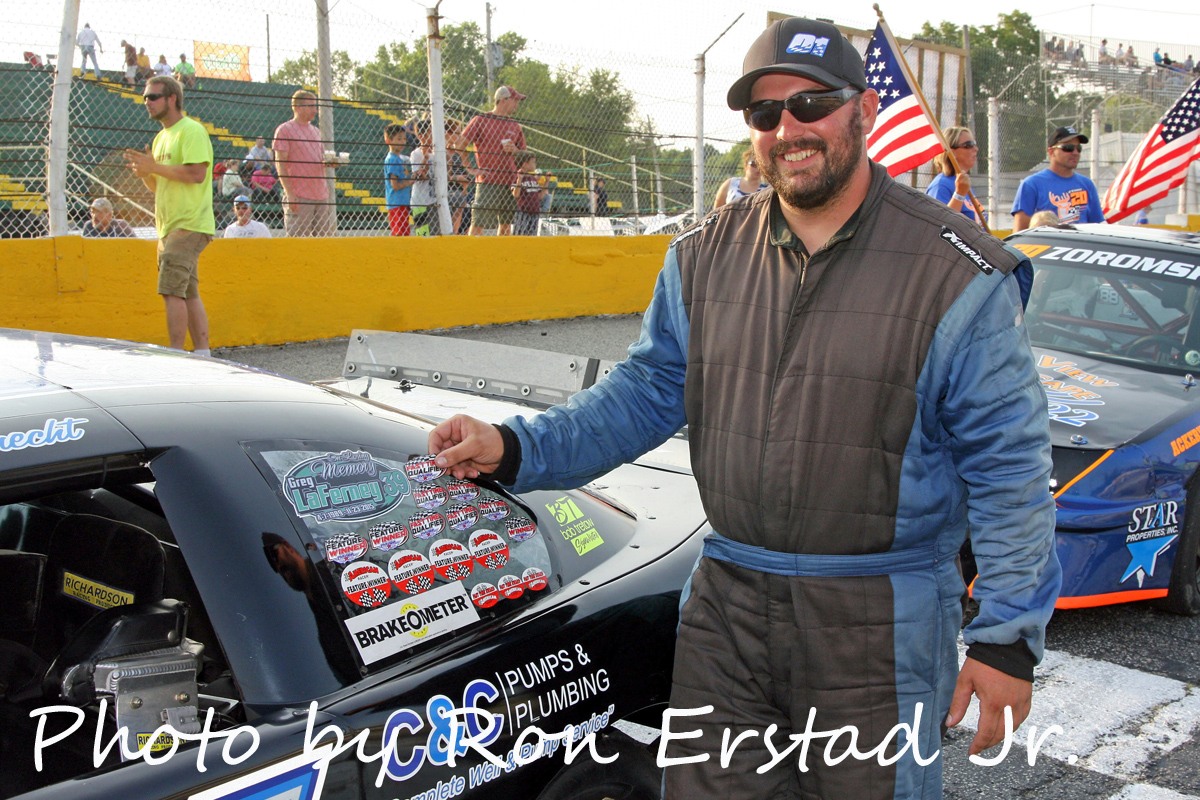 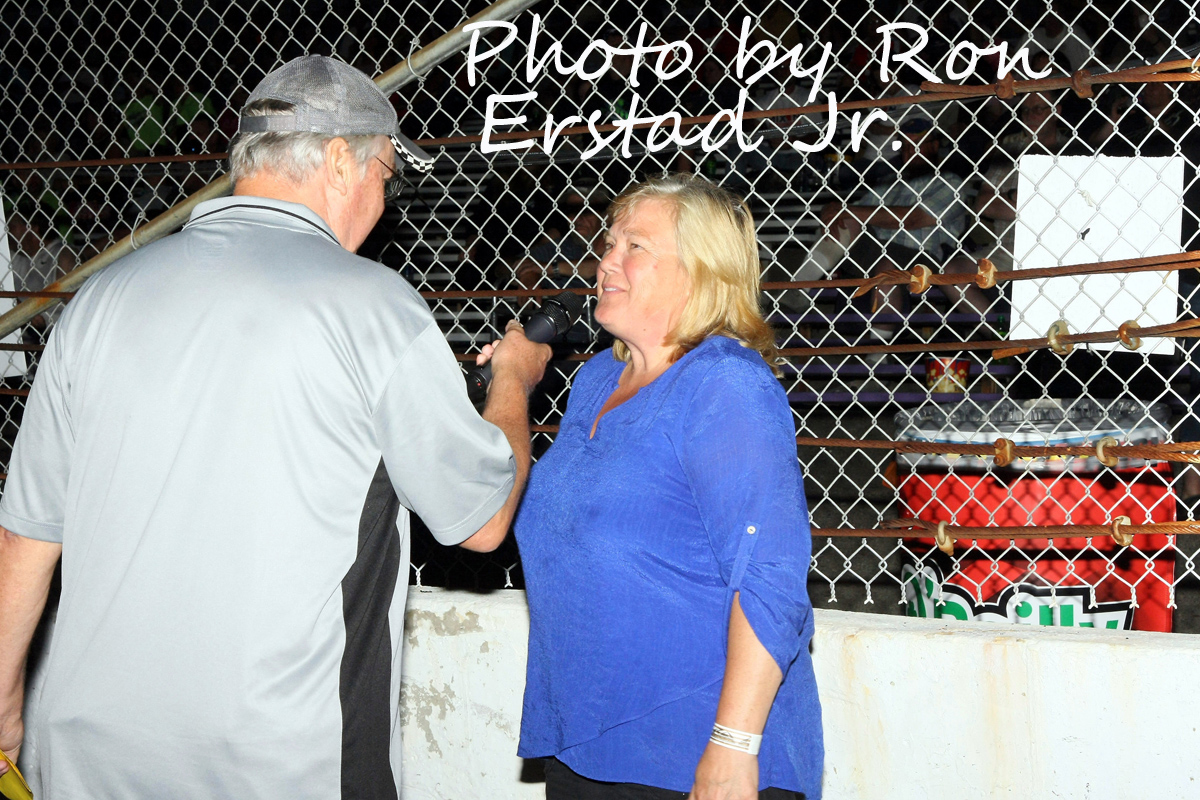 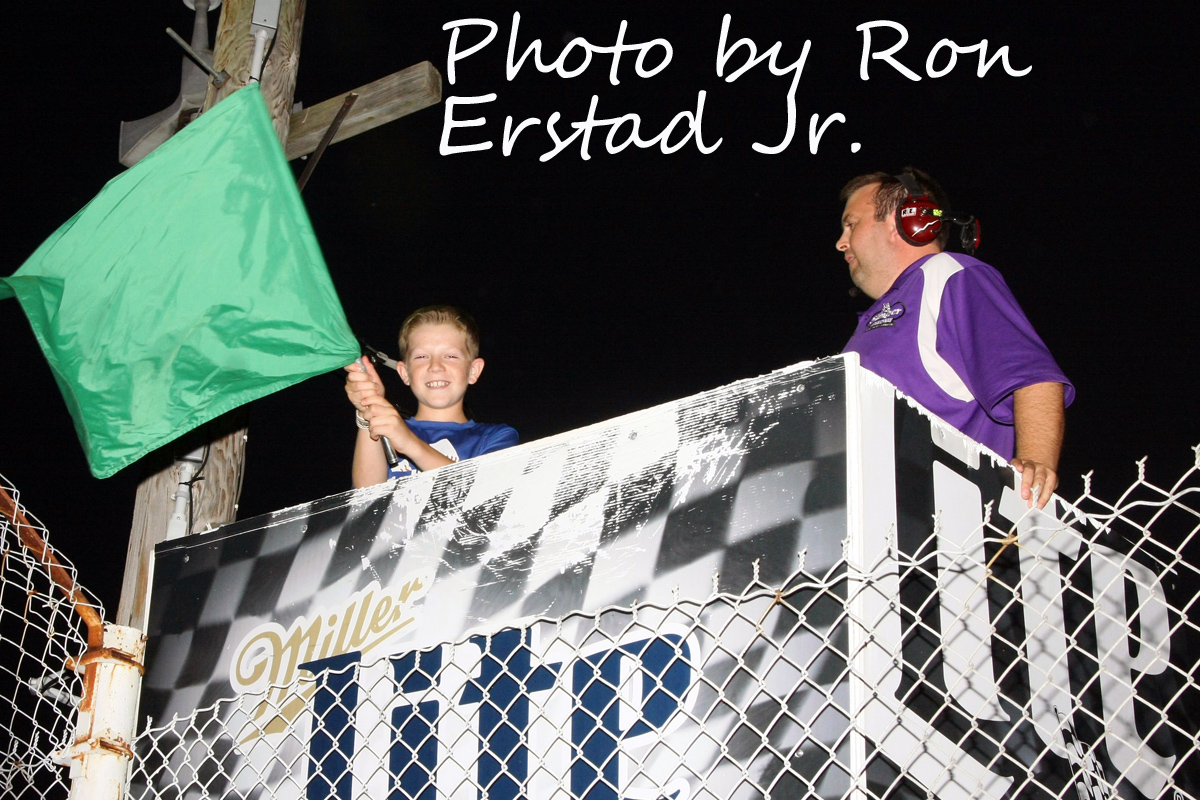 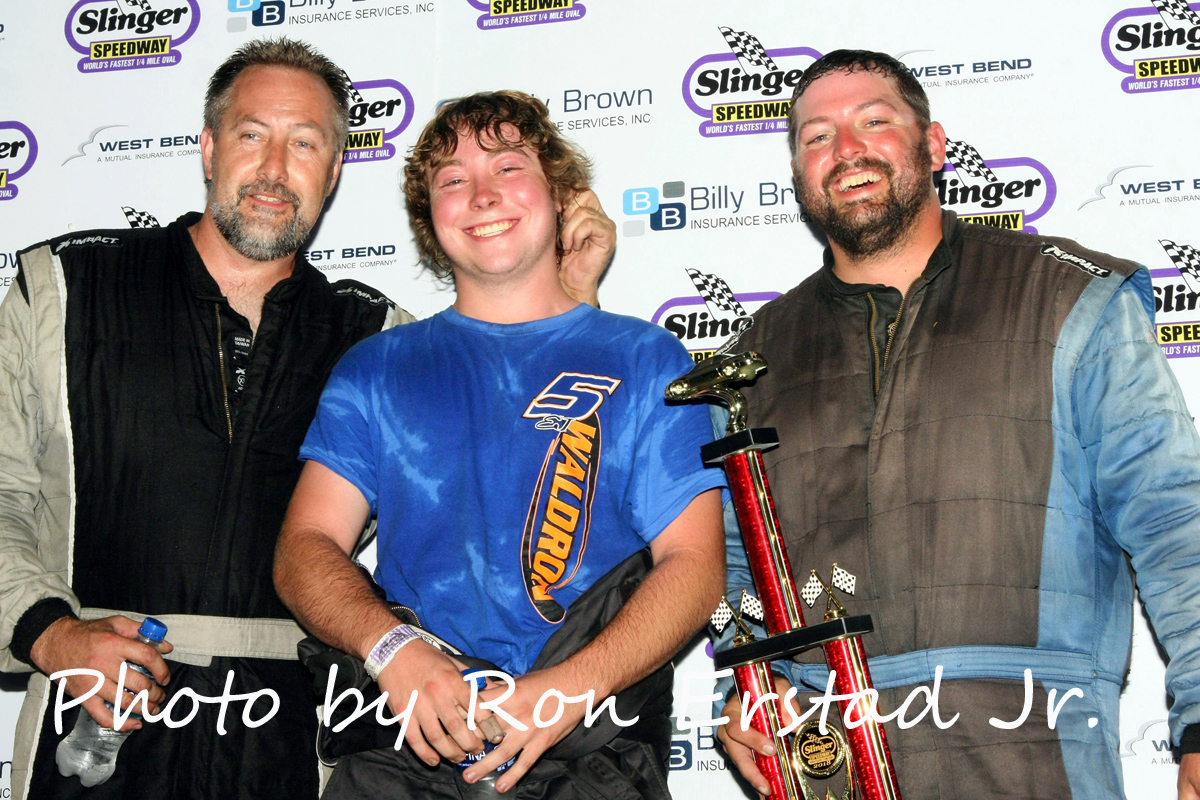 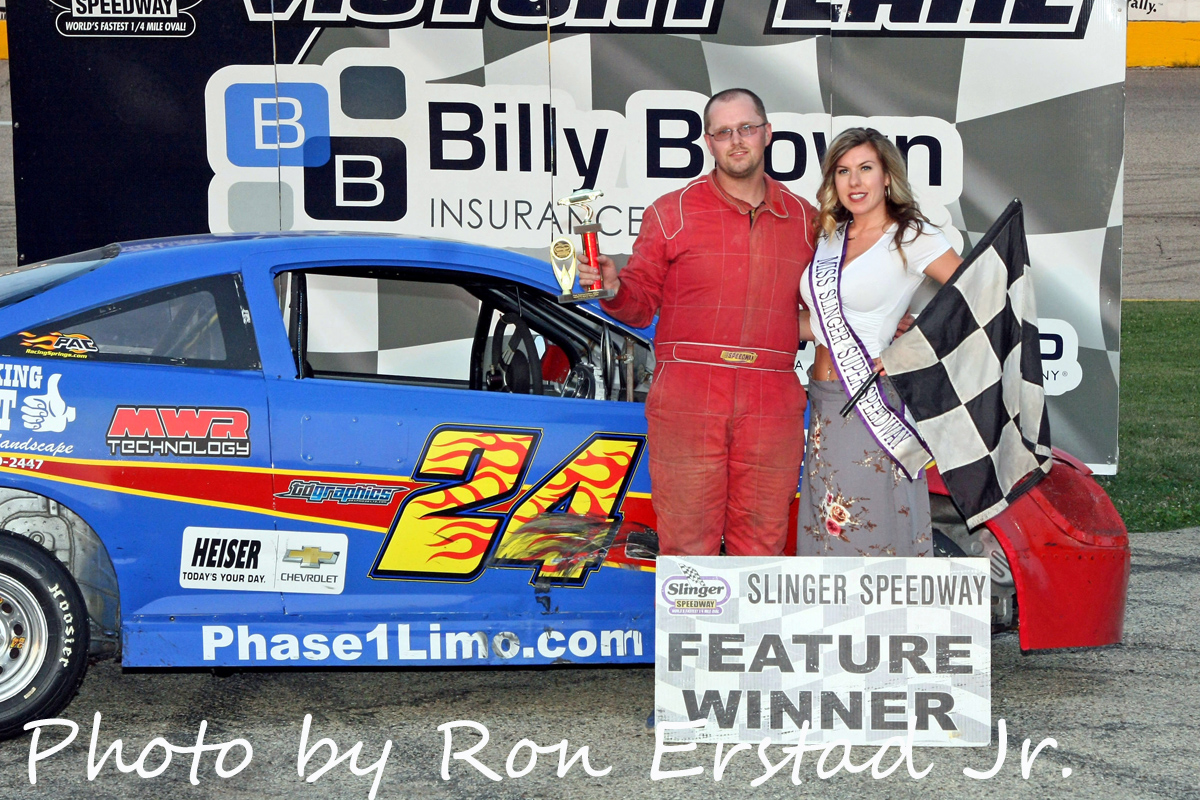 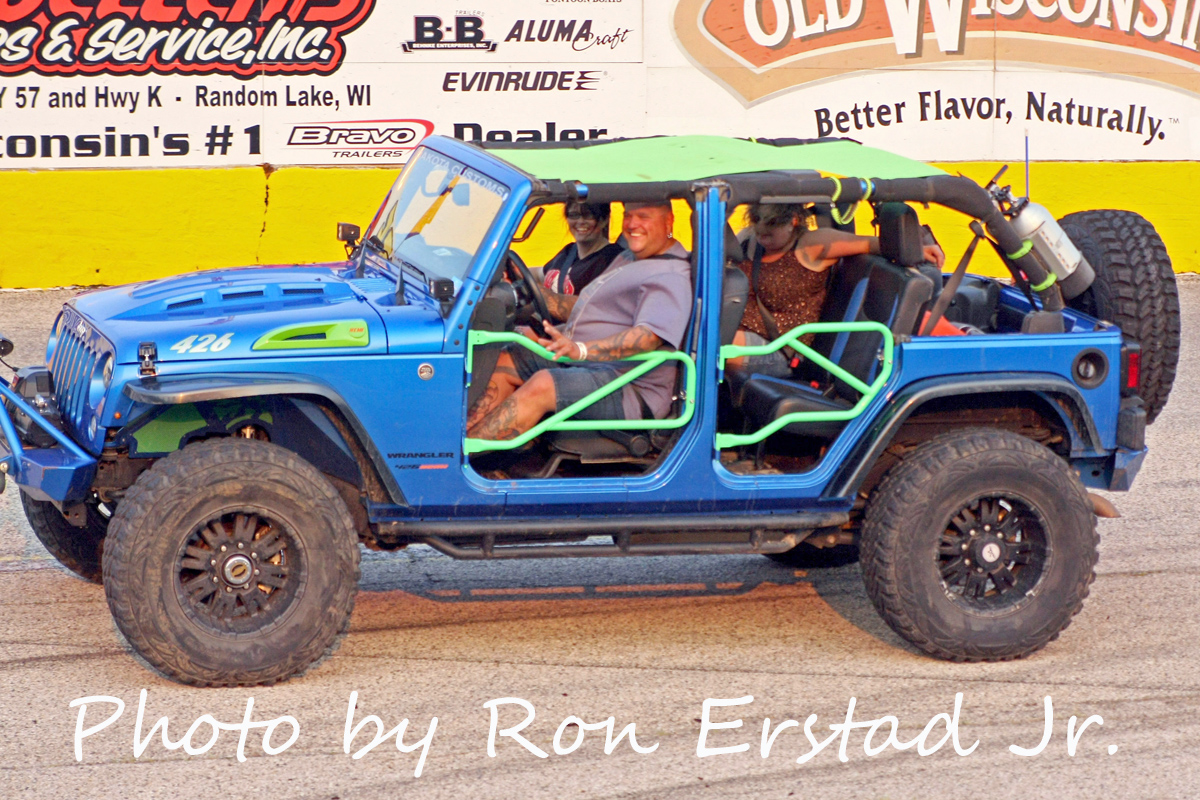 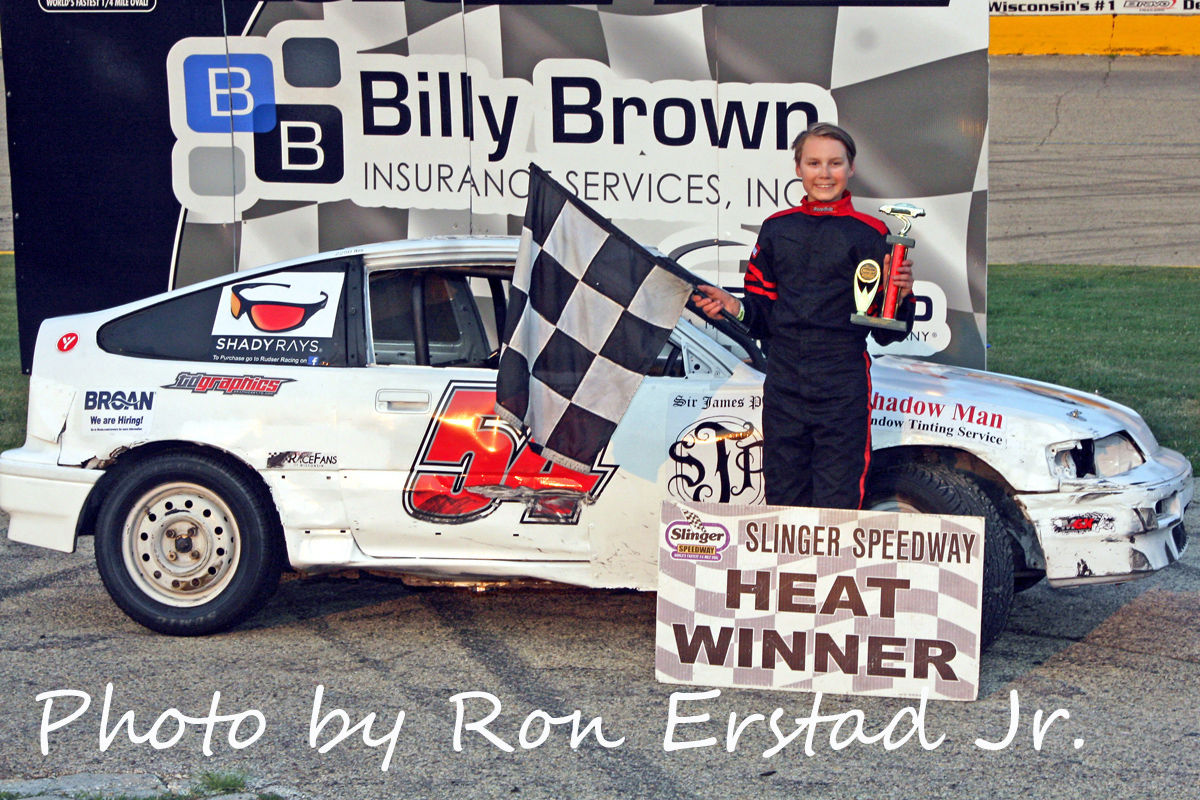 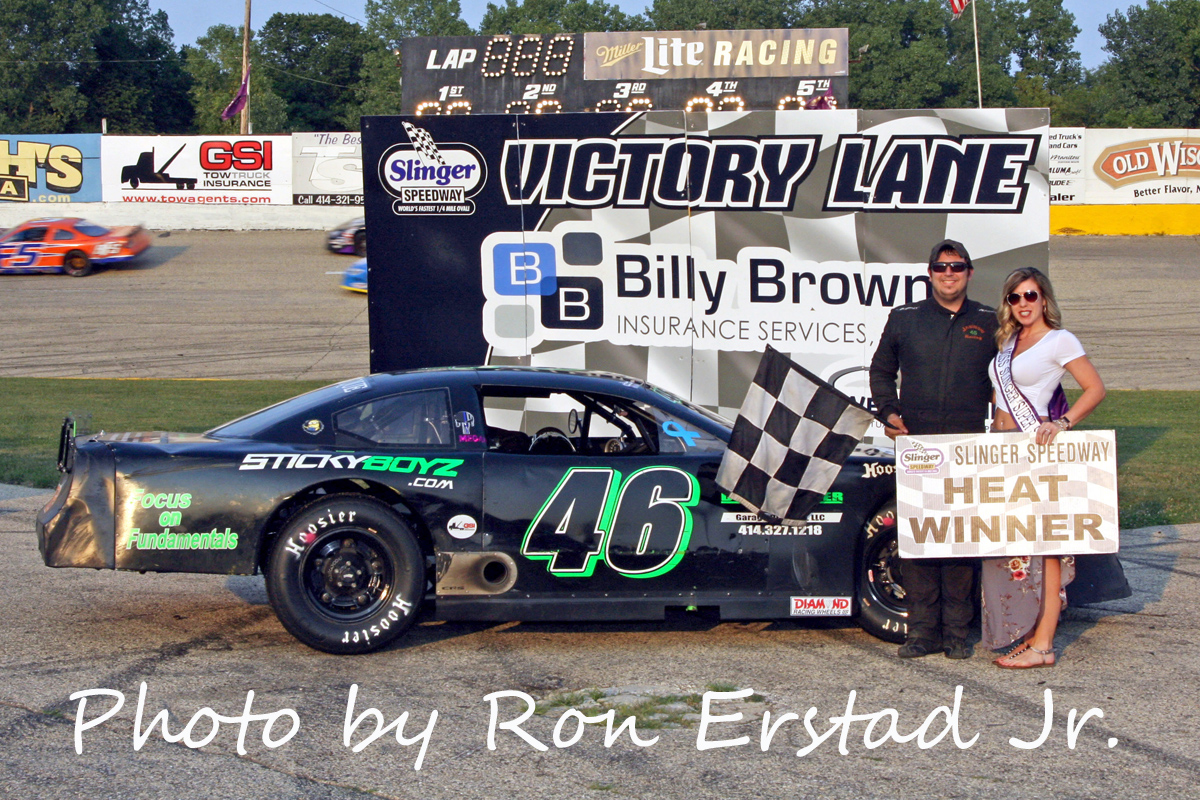 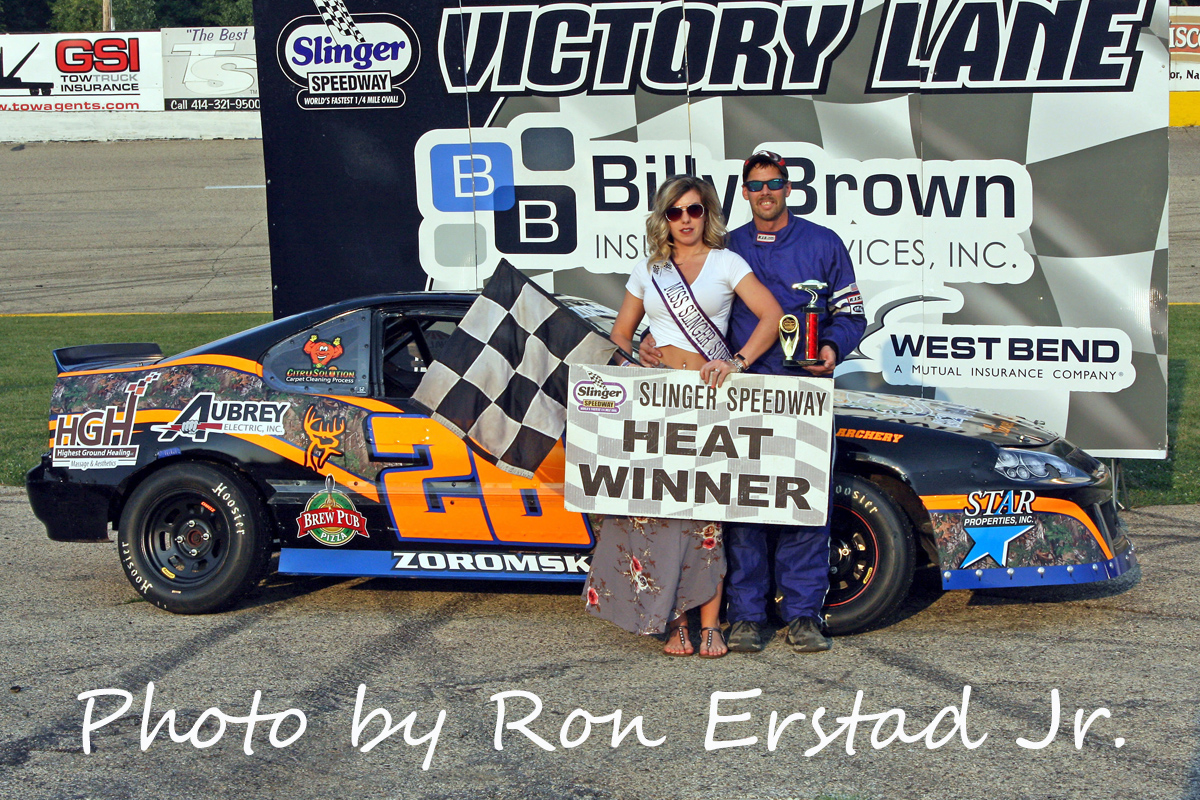 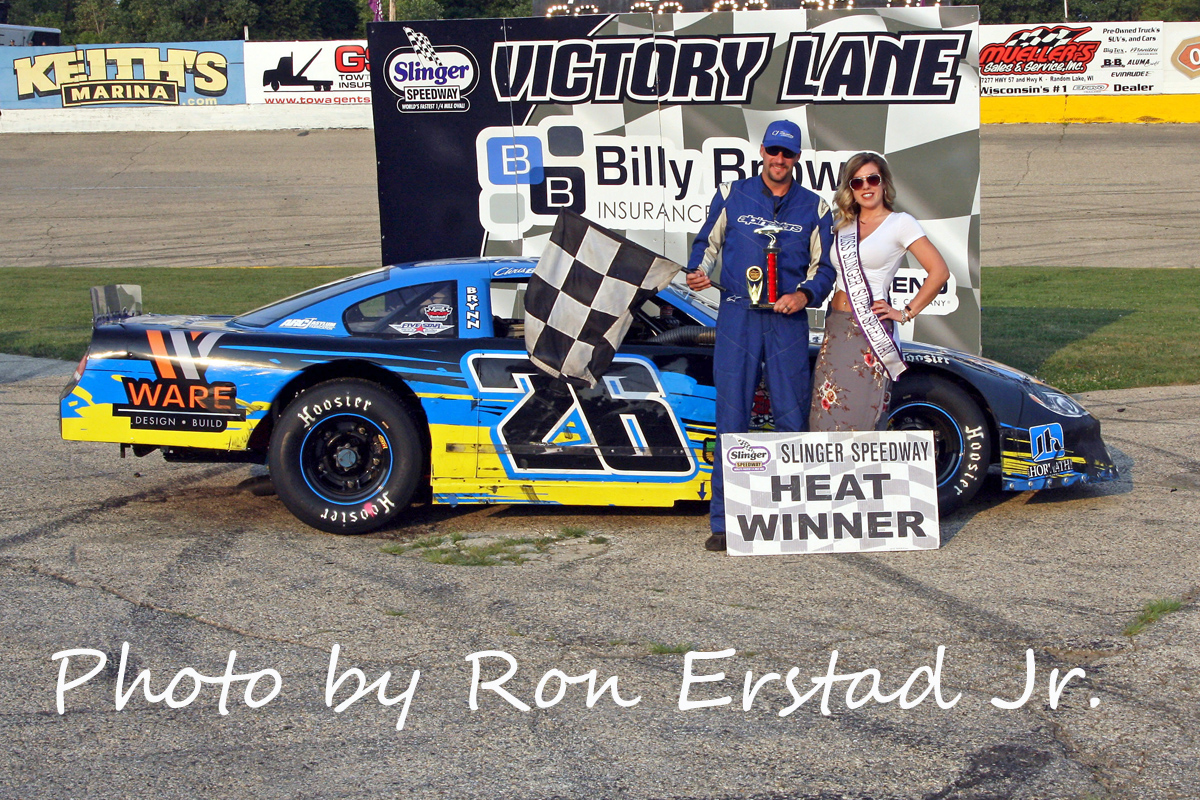 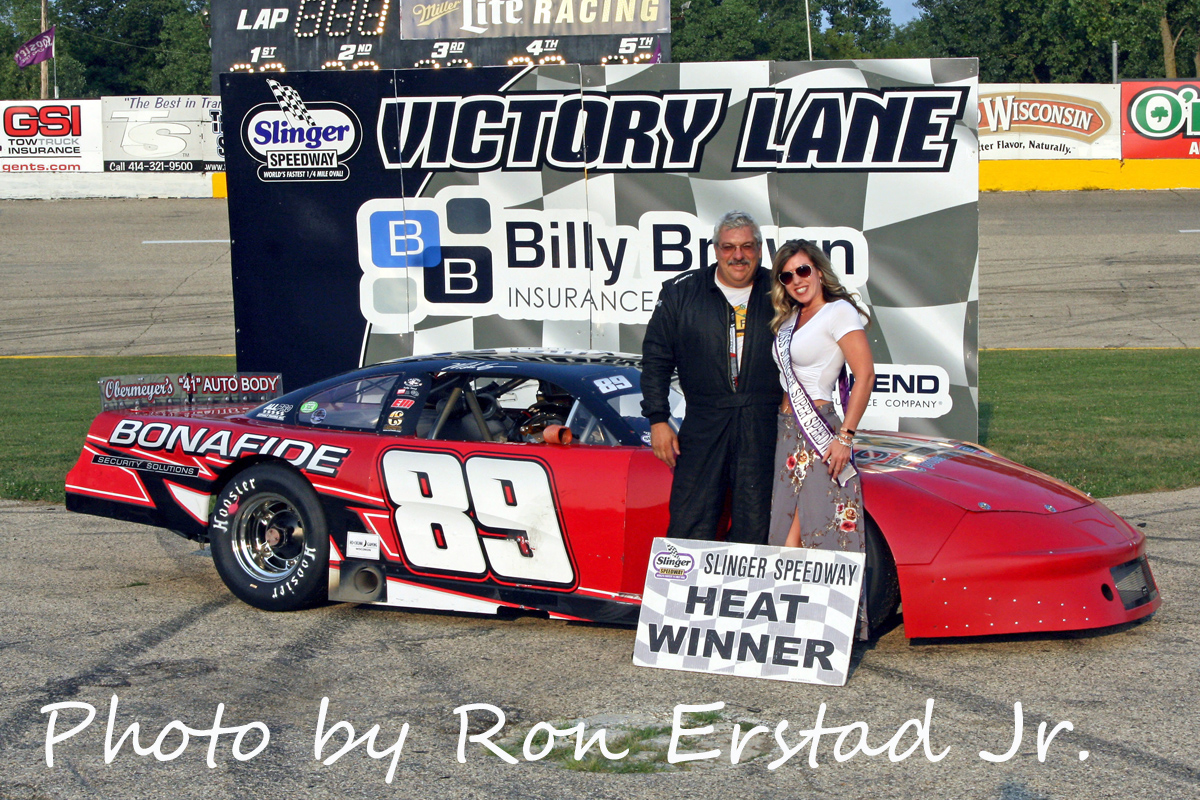 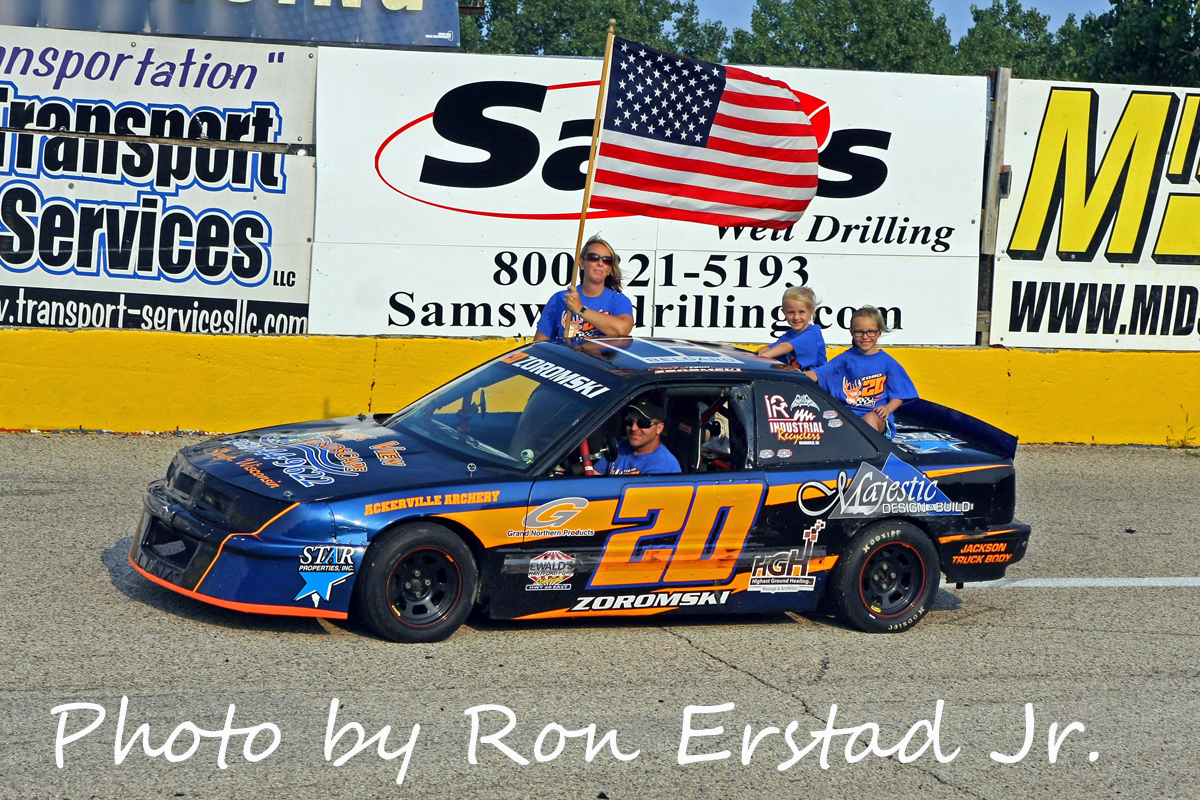 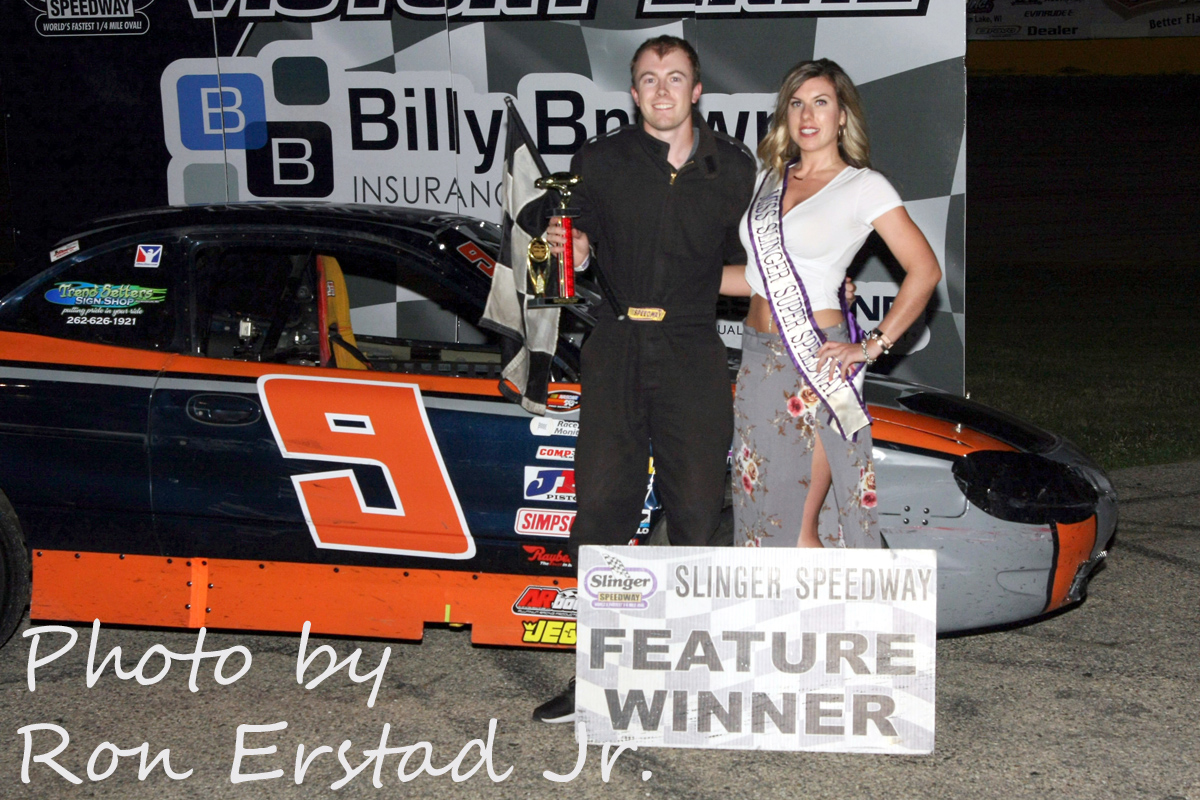 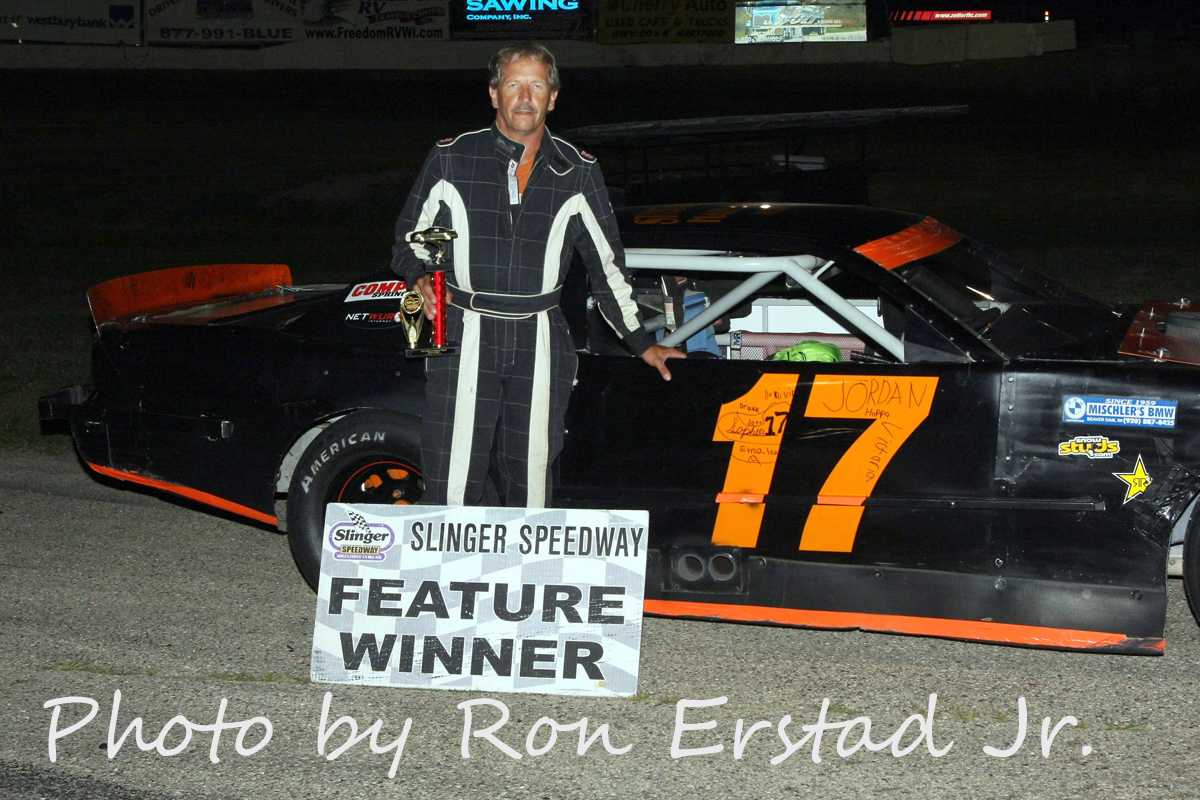 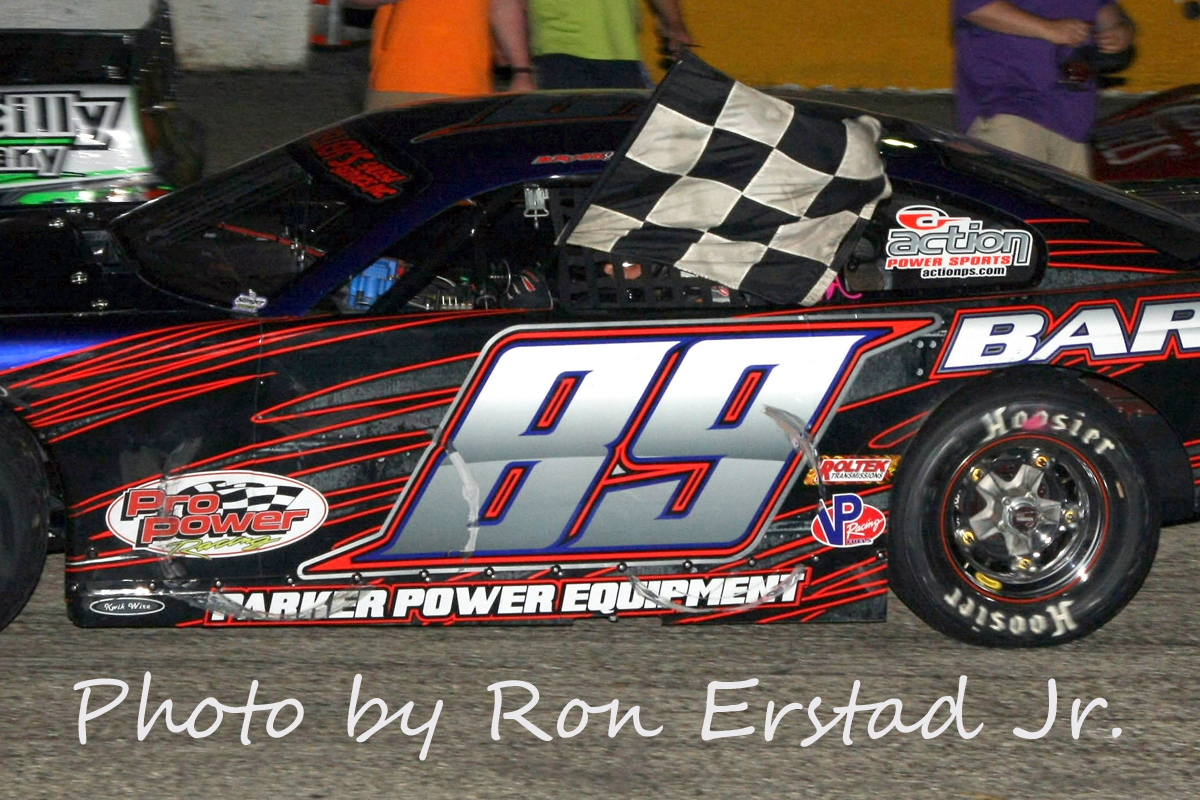