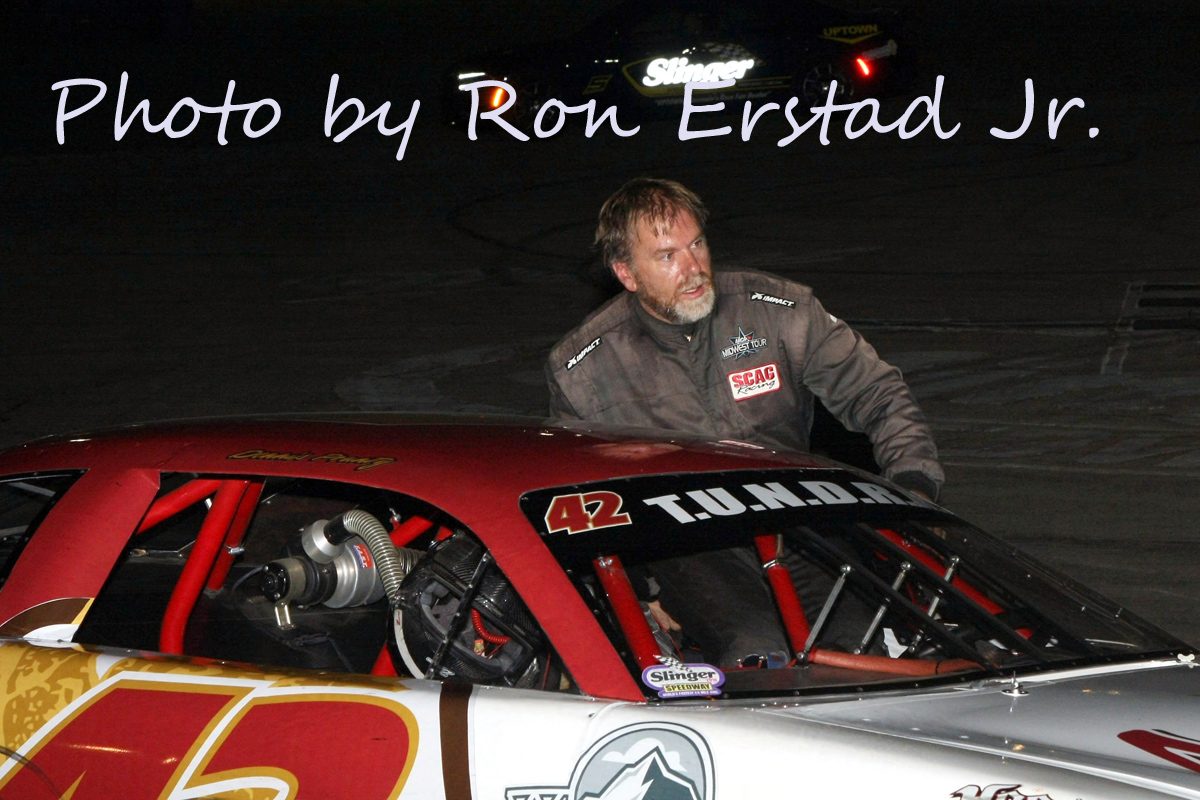 Slinger, Wis., Aug 19- Dennis Prunty drove to victory in the 60-lap super late model feature Sunday night at the Slinger Super Speedway in the third and final round of the Triple Challenge while Alex Prunty was the overall Triple Challenge winner.

“I thought of something all week, “ Prunty continued, “And I did something for the long runs and I think it works but it didn’t work in qualifying and it doesn’t work for the short runs, so we’ll after to figure out what we need to change.”

“I had a pretty good car tonight and I just burned it off a bit too much too early there on some restarts, “Alex Prunty said after surviving hard fought battles with Brad Keith and Chris Blawat to bring home a second place result.

“The bottom was just too slippery and I needed the outside and on that last restart he (Dennis Prunty) saw it, “Prunty explained after his second place finish netted him the Triple Challenge championship, “I got a run up top but it was just one of those deals where the top was hard to beat and we’ll just get them next week. It’s the first time I won the Triple Challenge and it really means a lot to me.”

Brad Keith became caught up in an early incident and then drove through the field to briefly run second before settling for a strong third place result at the finish.

“The car was really good tonight and we’ve been kind of struggling in race trim here, “Keith told the crowd afterwards, “It’s been qualifying really great and this week we took a big swing at it right before the feature and that think really came alive at the end.”

Chris Blawat battled with the front runners all race long and briefly challenged for the lead before finishing in fourth place and Nick Wagner racked up another top five result in fifth. Conrad Morgan finished sixth followed by Mike Held and Grant Griesbach in seventh and eighth respectively while David Prunty and Rich Loch completed the top ten finishers.

Ryan Gutknecht took the lead at the halfway mark and drove to the victory in the 30-lap Midwest Sportsman feature. Bobby Gutknecht worked his way forward from the fifth starting spot to finish second while Brian Holtz finished third after a spirited battle with early leader Eric Lingford who took the checkered flag in fourth. Tom Elsinger crossed the finish line in fifth. Eric Lingford won the Midwest Sportsman heat race and Ryan Gutknecht set fast time at 12.638 seconds.

Paul Wagner won the 30-lap Area Sportsman feature after driving to the front on lap nine. Jay Kalbus and Jake Schraufnagel battled intensely for the second position throughout the race before Kalbus edged Schraufnagel for the postion. Schraufnagel finished a strong third while early leader Scott Ascher took the checkered flag in fourth. Chris Beine was the fifth place finisher. Area Sportsman heat races were won by Adam Bleskan and Jay Kalbus while Kalbus also was the fastest qualifier at 12.818 seconds.

Brandon Tackes held off his father Marty Tackes to score the victory in the 25-lap Slinger Bee feature. Brandon Berens finished third while Zach Greer and Garrett Konrath rounded out the top five as the lead cars raced in a tight pack for the entire race. Ricky Gebhard and Jake Rudser each won Slinger Bees heat races and Garrett Konrath was the fastest qualifier with a lap at 15.215 seconds.

Ryan Lovald won the Figure 8 race over Bill Shavlik, Scott Goetzke, and Nick Ostberg to close out the evening. 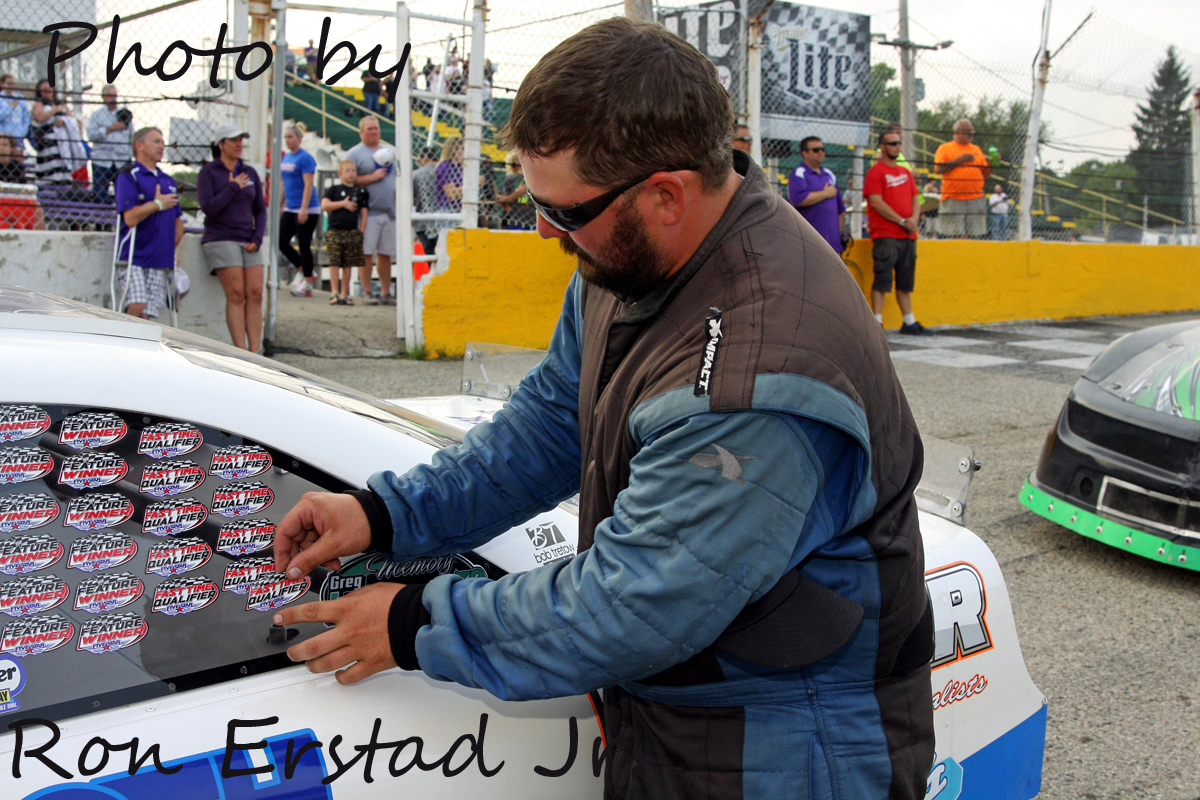 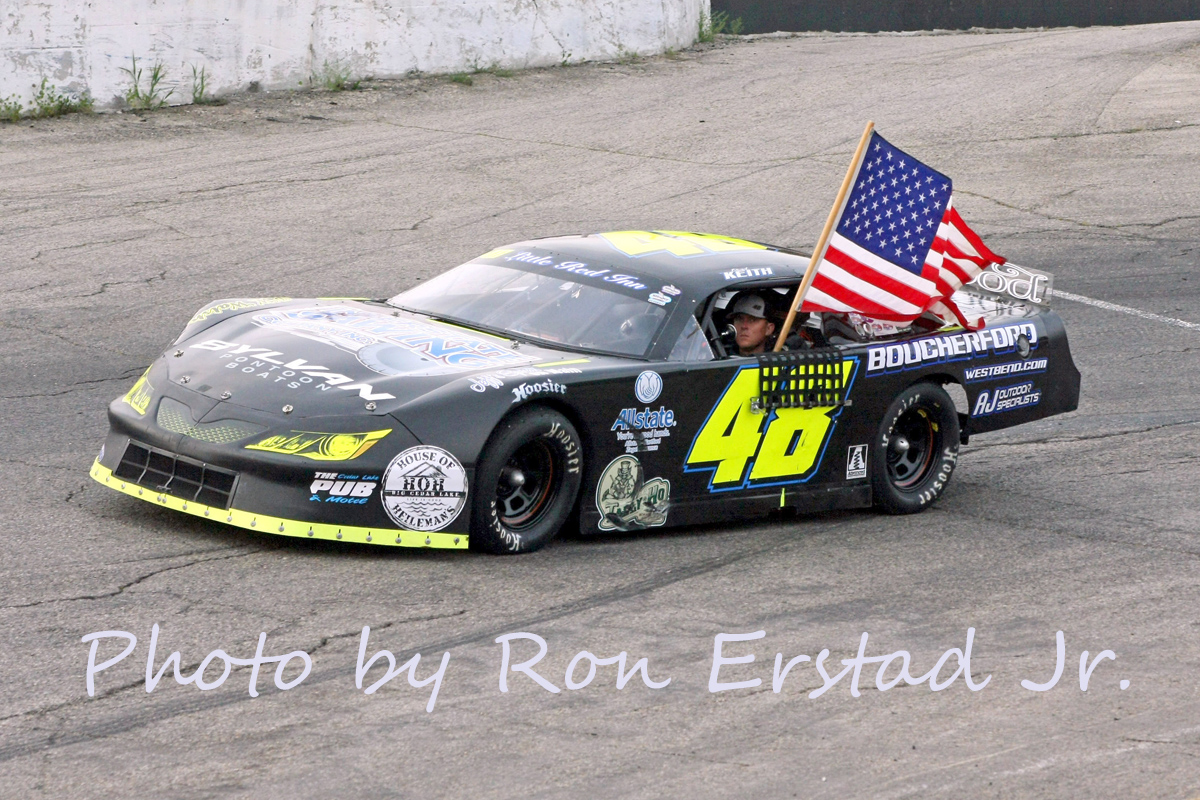 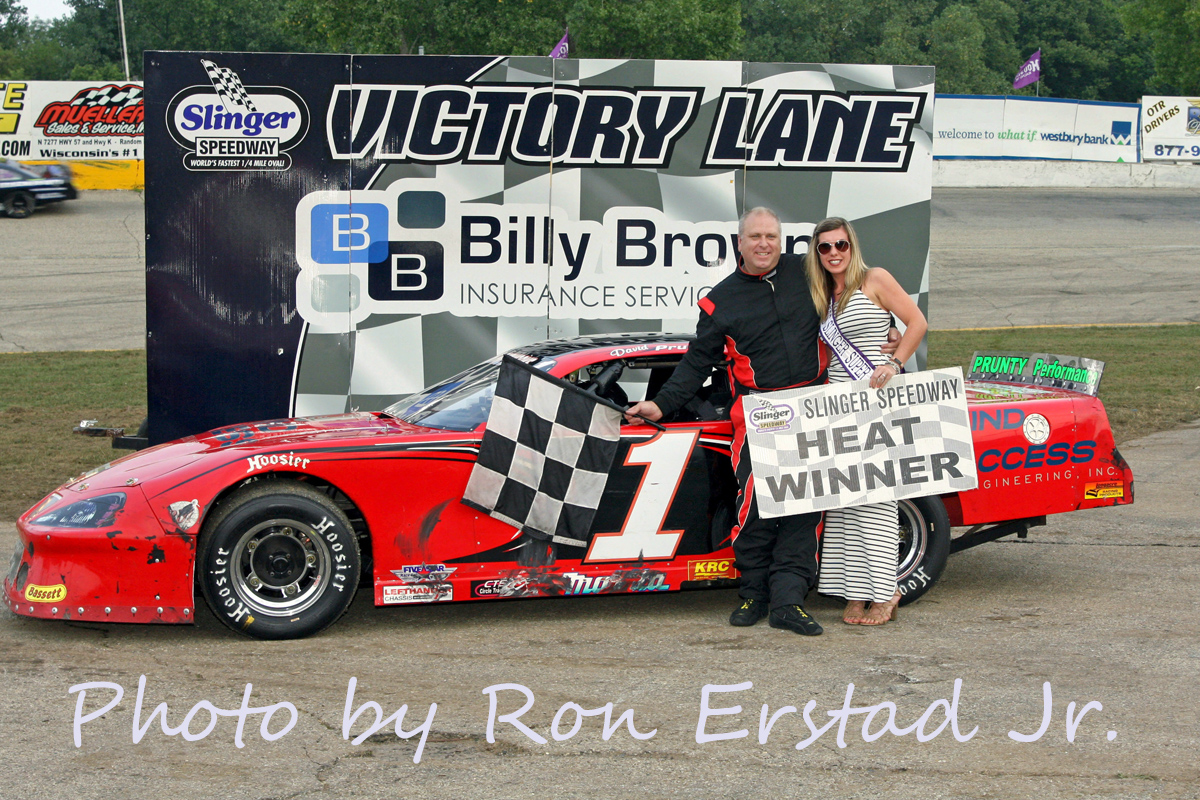 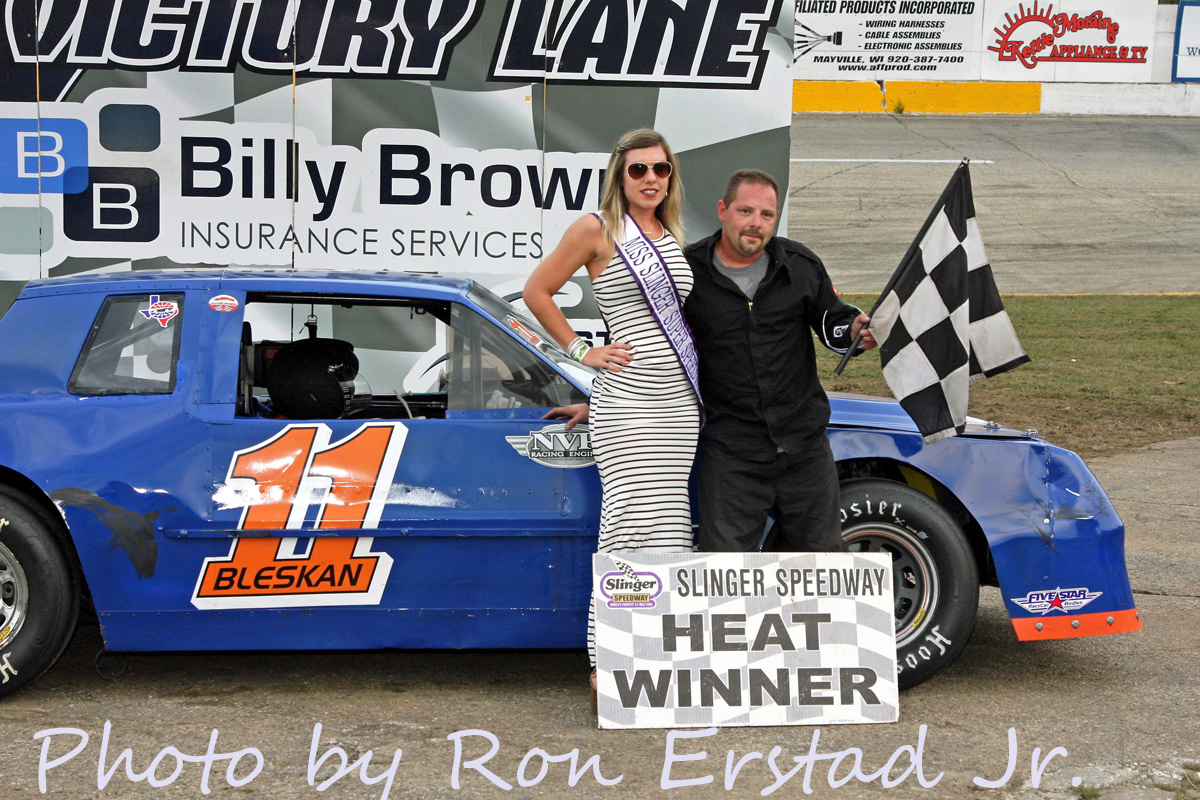 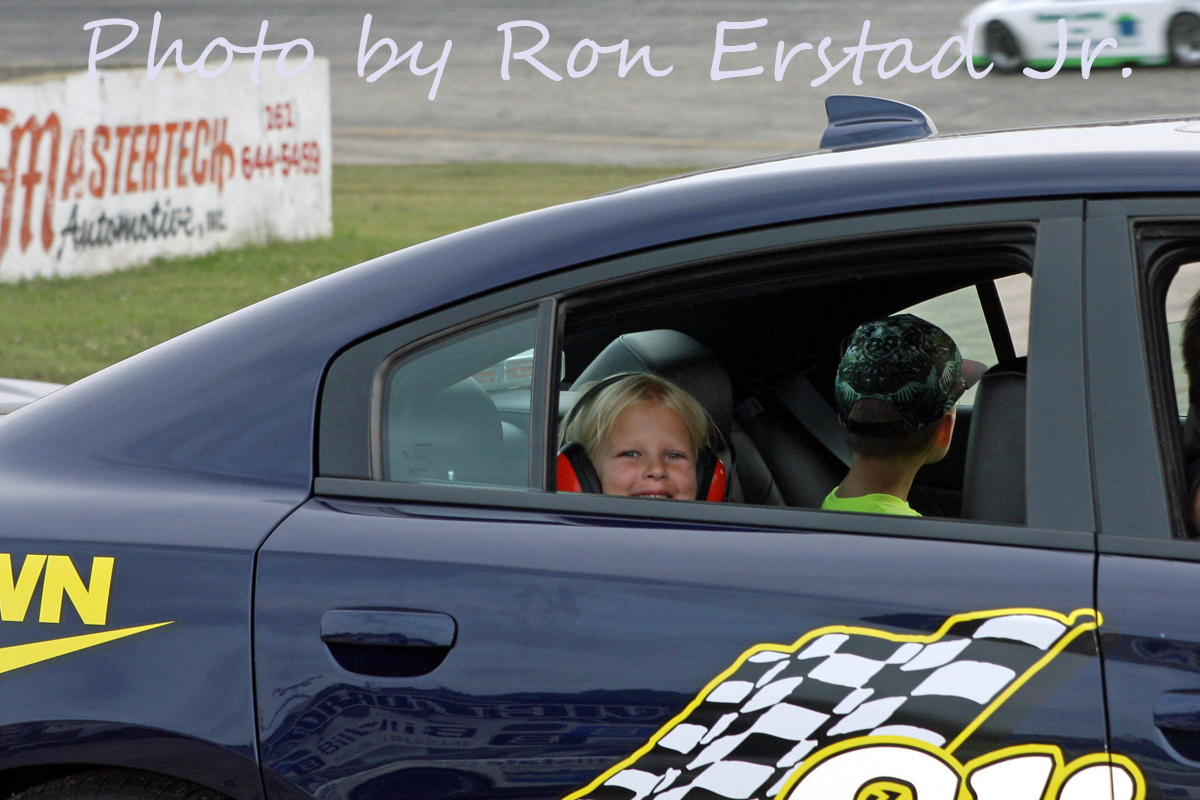 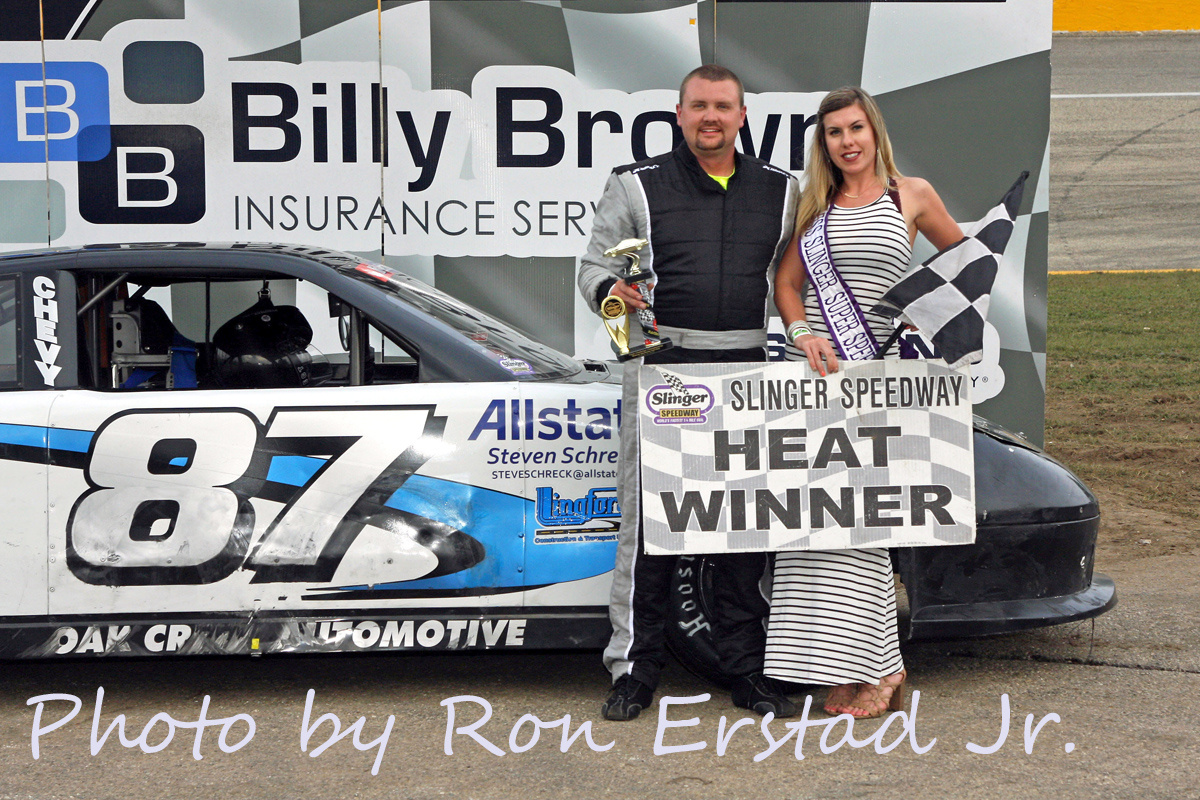 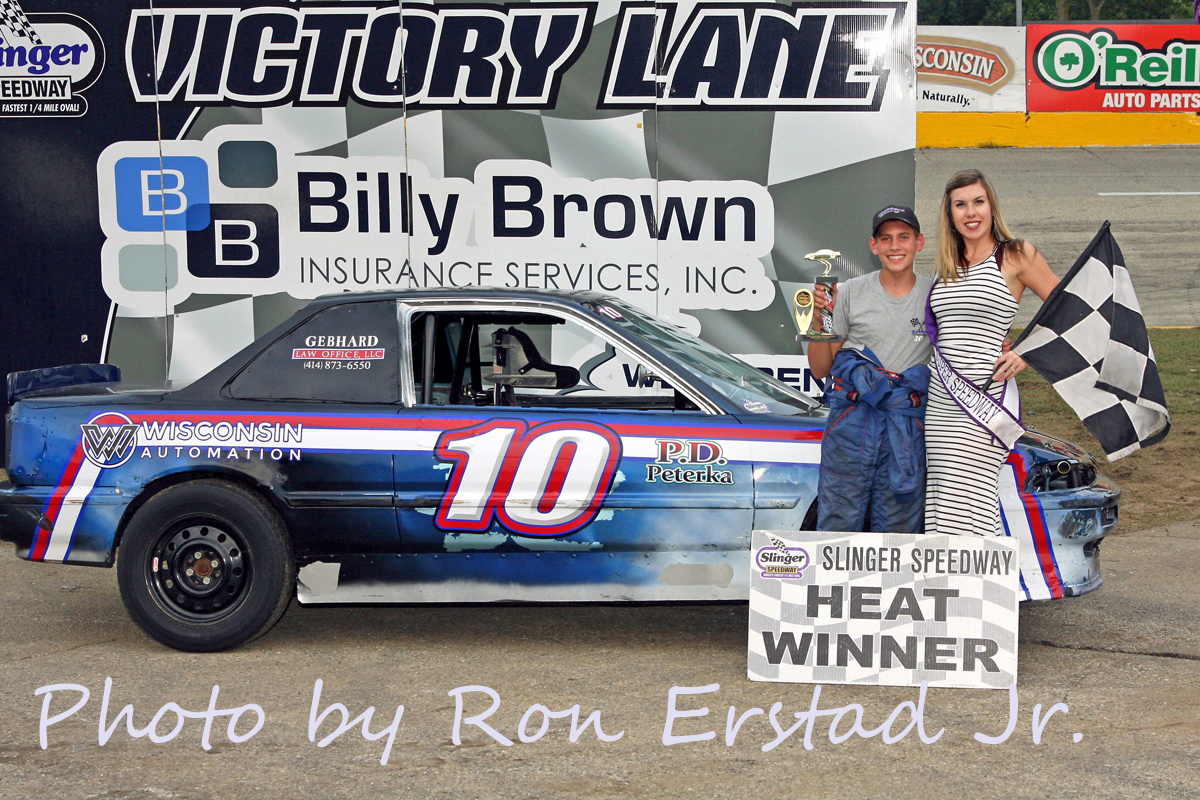 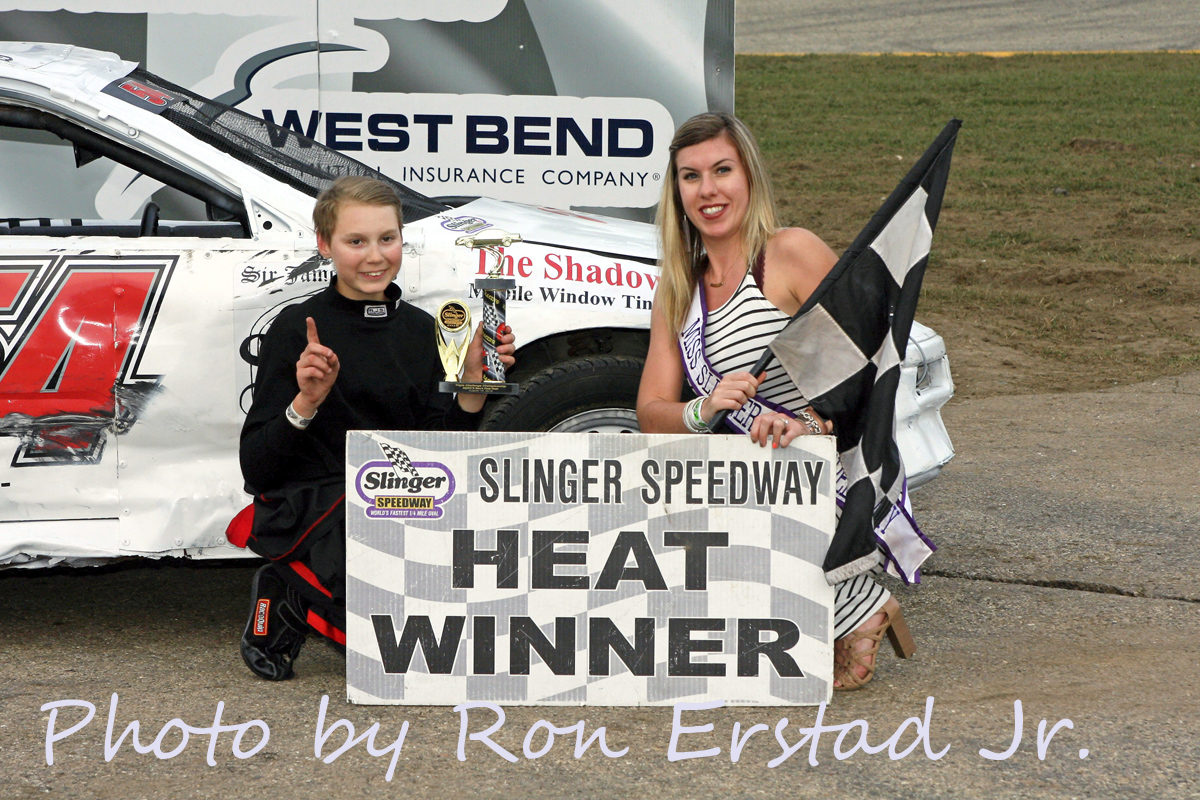 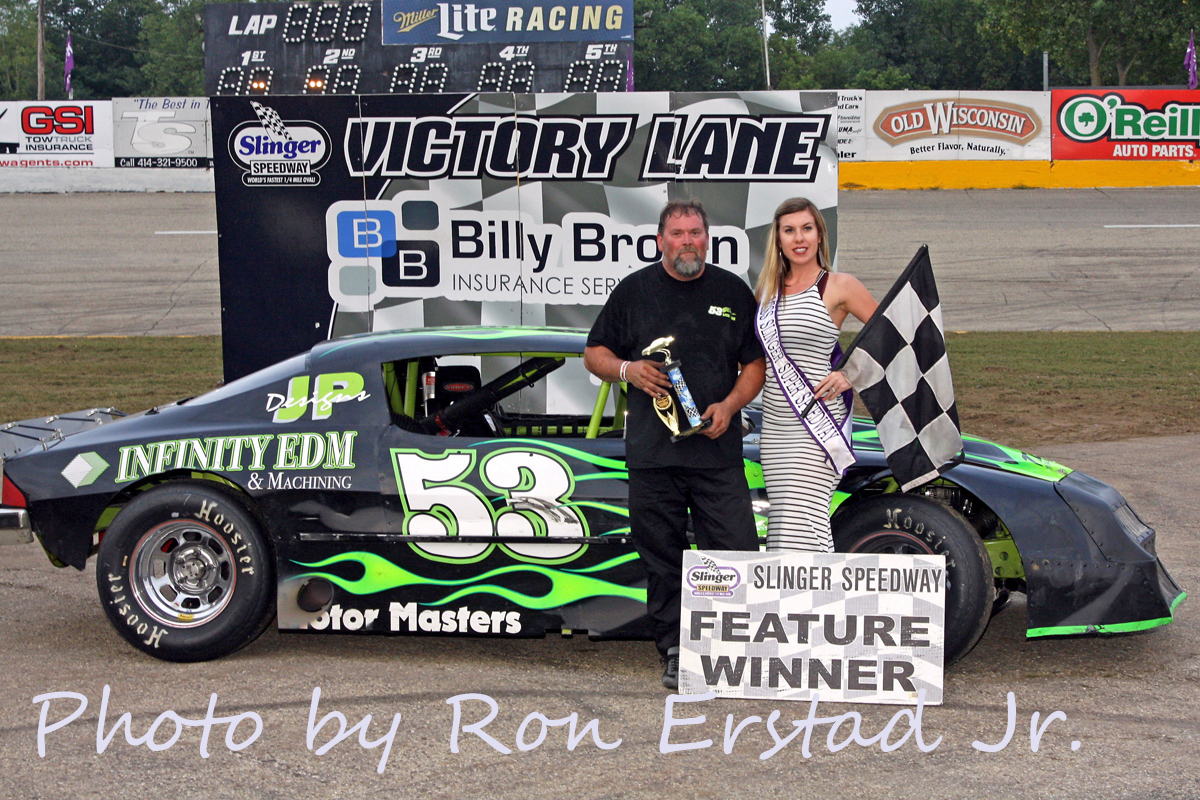 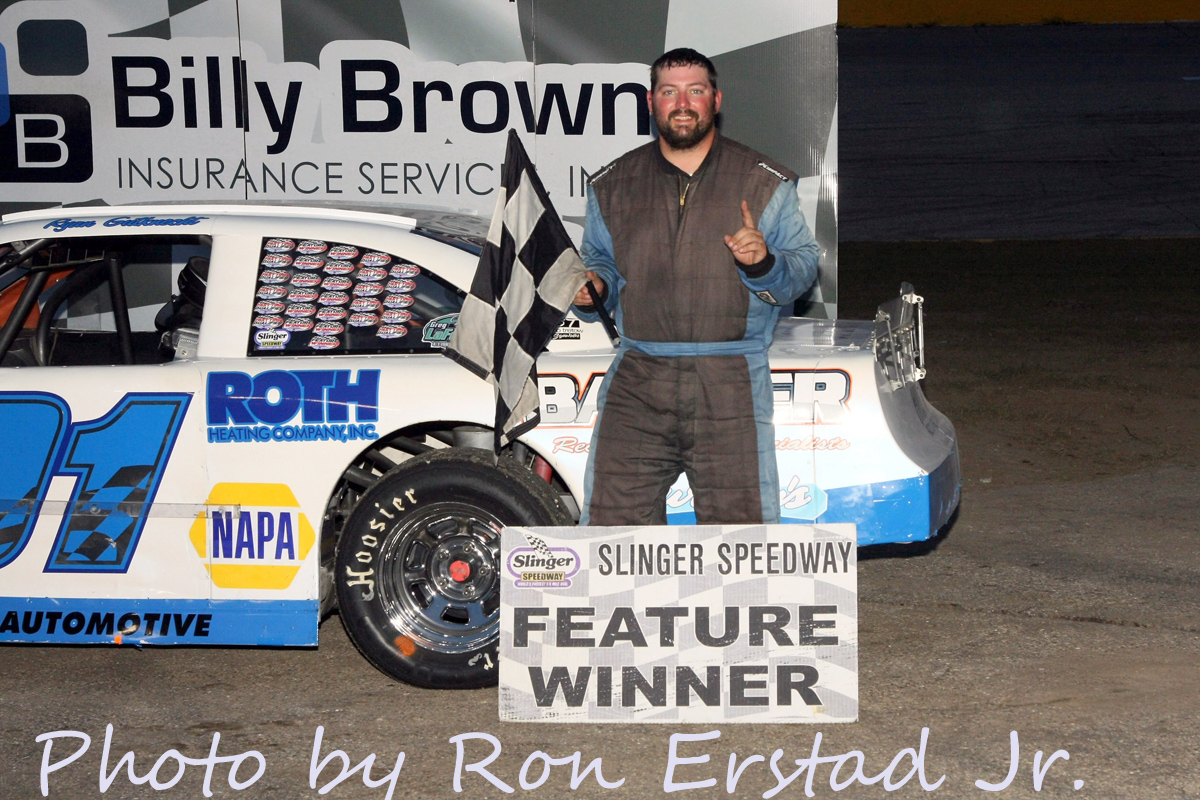 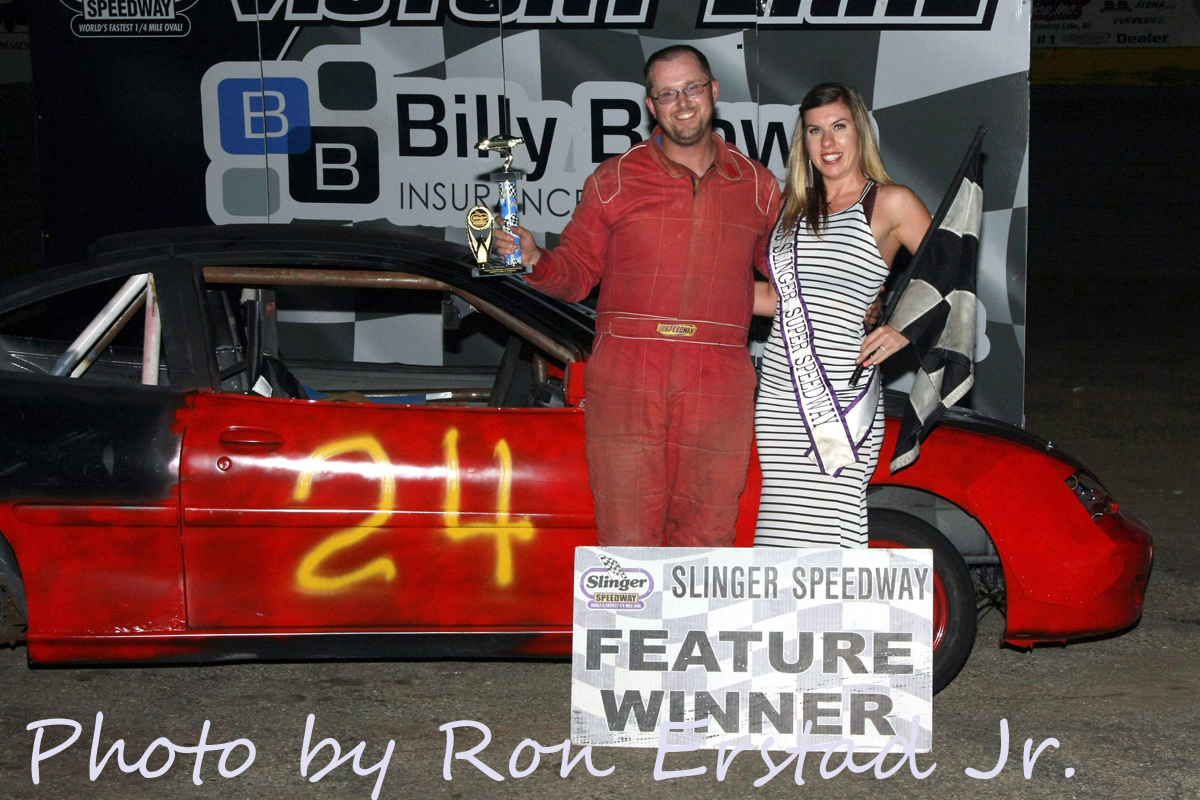 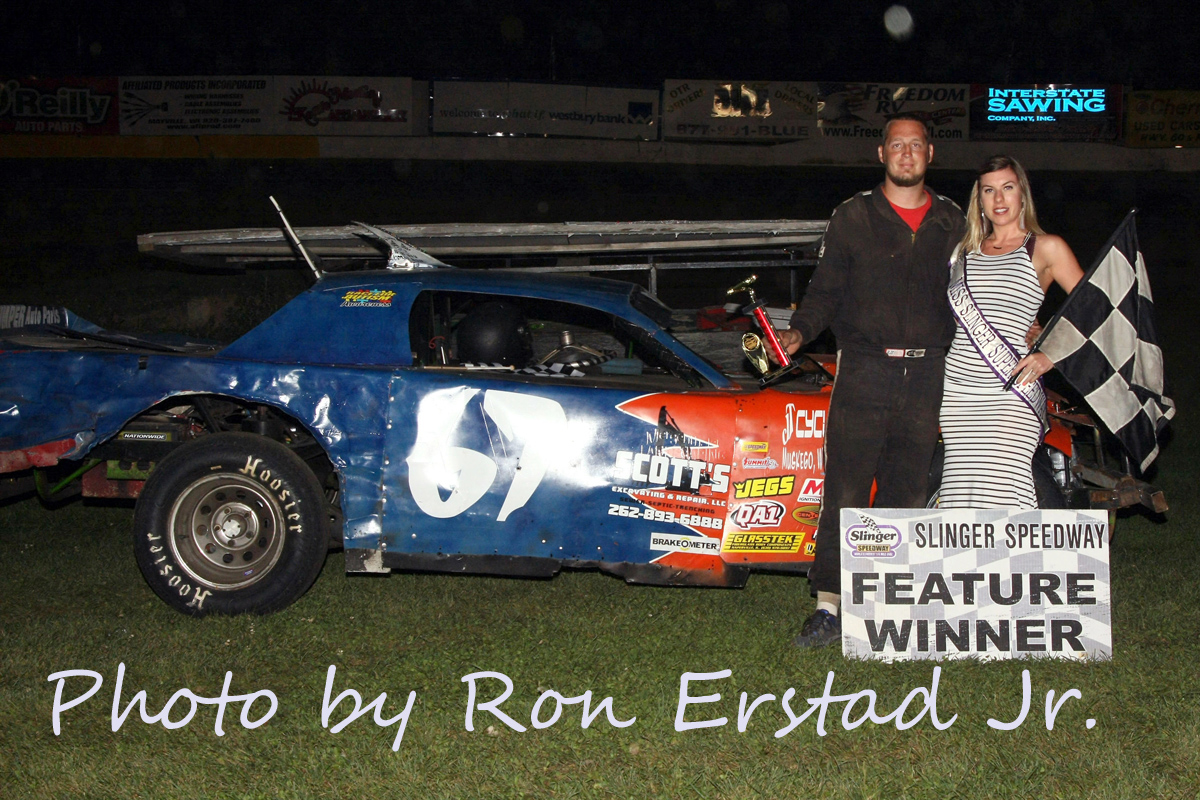