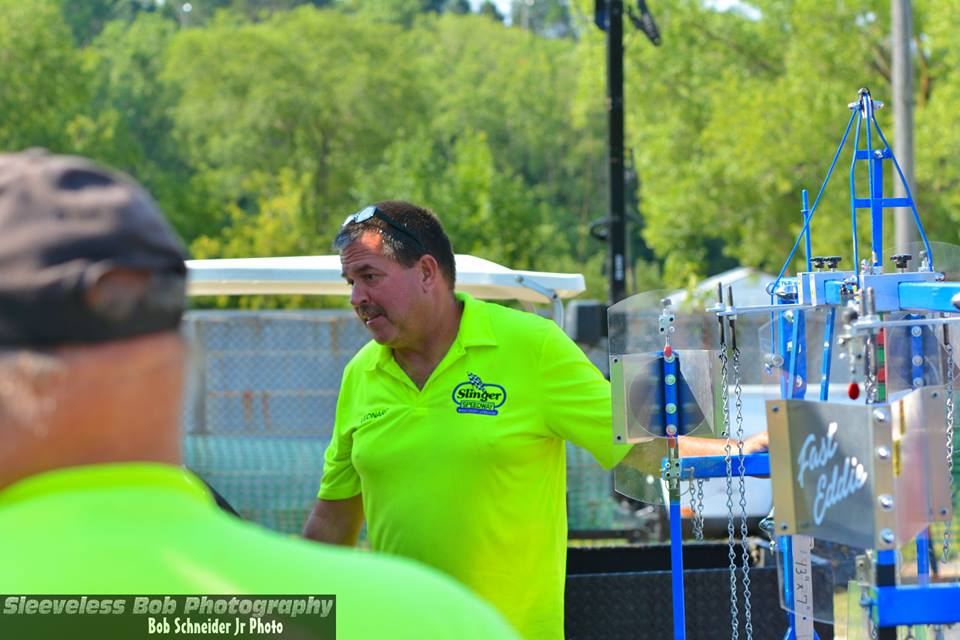 How did you get into racing?
My dad [#00, also named Leonard] raced super late models all around the state from 1974 through 1980. The year I was 14, we actually raced six nights a week! In those days you couldn’t go into the pits unless you were 16 or over. Starting at age 15, I lied about my age so I could get in. When I was 19, I started working as a crew guy for Mark Martin in North Liberty, Indiana. From 1982 through 1984 I worked with Joe Shear, and in 1985 I built a car with Rich Bickle. Then I started racing again (I ran go-karts when I was a kid), first in Enduros, then street stocks, Roadrunners, Figure 8’s, and finally late models.

What divisions have you raced at Slinger?
Figure 8
Late Model
Enduro – I liked that division the best because of the long races (250-300 laps)

How did you come to be employed at Slinger Super Speedway?
After I quit racing in 2008, I started teching for the Big 8 Series (I still do that). My dad was friends with Wayne Erickson, and Todd Thelen knew what I did with the Big 8 Series, so he set up a meeting between Wayne and I. I was hired to work in tech, and did that from 2012 until this year when I became Pit Director.

Run us through your duties in a typical week.
Teams can rent the track to practice three days a week, plus Sundays from 10:00 to 2:00, so I take care of that. Monday through Wednesday I clean up the garbage all around the grounds. On Tuesdays I’m at the track by 7:30am to unload the weekly tire shipment, then I sell tires on Thursdays from 4:00 to 6:00. On Fridays, I mow the infield and pits, touch up the walls around the track (get rid of the tire marks), repaint the line for the Start Zone, and touch up any billboard damage. In between those things, I do general repairs and maintenance around the grounds throughout the week. On Sundays, I get here around 9/9:30 (earlier if the Memorial Go-Karts are running) to get everything ready for race day.

What do you like about Slinger Super Speedway?
I don’t like it – I love it! Todd and Rodney treat me well. I like all of the people; the racers are like my second family…my racing family. I love my job!