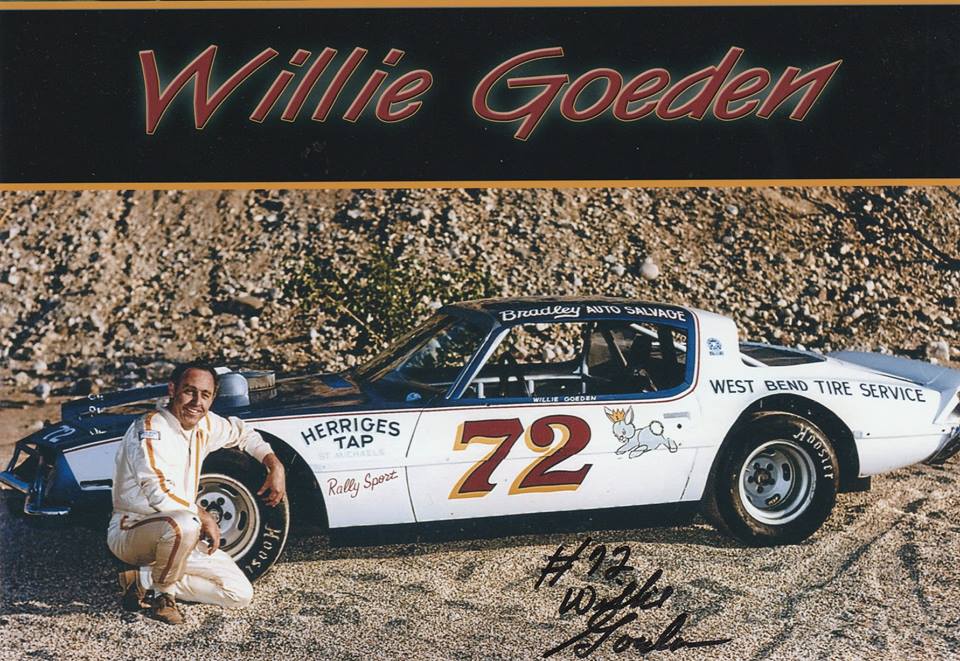 How did you get into racing?
I went to Slinger and saw Billy Chitwood in a Corvette, doing jumps – I liked that! As a 16 year old in high school, I decided I was going to get a car and go racing! (Jeanne: First he went into the Army Reserves from age 18 to 20.) I bought a ‘39 Ford Coupe and started racing in 1958. Eventually we raced seven times a week, five nights and then two races on Sunday. My last race was May 7, 1987. We had just purchased a new car that year and had a new sponsor, Schmit Brothers Ford. I had always run Chevys, Camaros usually, but if you ran something other than GM you got a 50 pound weight break, so we switched. (Jeanne: We tested the car at Slinger on Easter that year, and had our Easter dinner at the track.) Coming for the green flag on that day [Thursday, May 7, 1987 at WIR in Kaukauna], there was a pile up in the fourth turn and I hit the wall, on the driver’s side. I spent six weeks in a coma. The boys and Jerry Zingsheim rebuilt the late model. The next time I drove the car was on a Sunday afternoon at Slinger, I got out and couldn’t hardly stand. The centrifugal force caused bad headaches, so that was it.

What do you like about Slinger Super Speedway?
When I ran it, I thought it was the best track! The promotion was very good. I got along with Wayne [Erickson] and liked how he started the fastest cars in the back of the feature (and I had fast time there so many times!). Plus local people came to watch and supported our business [Goeden’s Auto Body & Towing] and the track. It’s a nice track! We have sponsored cars (Dale Prunty, Dennis Prunty, Alex Prunty, Scott Schoeni, Marty Tackes, Brandon Tackes, Ken Wills, Mike Graczkowski, Ron Schmitt, Mark Ritger, and others!) and we sponsored the backstretch wall there for over 25 years.

Who supported you back then?
Crew: For the modified – Jerry Zingsheim, Dave Wilson, Paul Lochen, plus our boys [sons Donny and David] washed the cars
For the late model – Bobby Backhaus Jerry Zingsheim, and our boys by then knew the engine, setups, and tires Jeanne: The boys also helped when Alan Kulwicki ran our car. He couldn’t tell them apart, so Donny had to wear the engine hat, and David had to wear the tire hat so that Alan knew who was who! I remember one night in 1984, it was around 11:30 and the boys had to drive all around trying to find something open where they could get ice cream and hot fudge because Alan had a thing for hot fudge sundaes!

What is your favorite racing memory at Slinger?
A good one or a bad one? (laughs) A good one was winning the last 100 lapper held there on dirt in the modified [1973]. Jeanne: and back then, a hundred laps was a hundred laps – you didn’t get to take a break…or go in the pits for fuel or ask directions!!

How did you get your car number (#72)?
Jeanne: He bought a mod in 1963, but couldn’t keep it up so sold it. Cliff Krause bought it and registered it with the MSC [Modified Stock Car] series as #72 but found out he couldn’t drive it, so asked Willie to drive it. Willie liked Benny Parsons in NASCAR, who was also #72, so he just kept the number. Willie: Then “The Rabbit” came in after Fuzzy Fassbender won the championship. I put it on my car because Fuzzy was “The Hound”, and what does a hound chase…? [Me: sooooo, you were doing a little trash talking on your car, then?] Willie: (with a big grin): yes!

What is your favorite food?
Ribeye steak on the grill, medium. The best is made by the caretaker of our property in Wautoma, Matt Sommers. He used to be a chef at a restaurant and he times how long the steak is on the grill – it’s terrific!

What was your first car?
A 1952 Chevrolet.
(Jeanne: but the one he really remembers is….)
Willie: A 1958 Black Chevy convertible! But I didn’t have it very long, I fell asleep and rolled it over. (shrugs) It happens.

What TV show(s) are you into?
NASCAR – I like the way Kyle Busch drives, he knows how he wants his car set up and how he wants it done, he’s able to tell his crew what he needs. Second place is Kevin Harvick – he’s a calm driver, doesn’t get excited, does a good job driving and doesn’t bang around (laughs)
The Rifleman (Jeanne: he likes Mark, the little guy)
Fox News

Alan Kulwicki drove for you, how did that come about?
Jeanne: At the end of 1982, there was a Fall Special at Kaukauna (WIR) but Willie was going for the championship in the modified division at Plymouth, so we needed a driver. Doc Liddle suggested Alan Kulwicki. We ran a Frings Chassis and Alan liked those, so he agreed and finished second or third. In 1983, Alan won the Miller 200 at the Milwaukee Mile and then got fired from his Trans Act ride. He came to us asking if we would run the ASA circuit. We didn’t have much money for that, but Alan said he would pick and choose his races. He finished 10th in points. [Me: So he must have run well then….?] Jeanne: To tell you the truth, every other race he crashed! An interesting tidbit: Willie was still driving that car too, so when Alan drove the car, it was number 97, but when Willie drove it they took the door off (it was riveted on) and put the 72 door on.

Which Slinger driver (past or present) do you respect the most?
Aaron Solsrud – I raced against him in the modifieds and late models and he was a clean, hard driver.
The Prunty Family – Dale, Dennis and Alex….They are fun to watch..sometimes starting in the back and coming through the pack. They are so professional and clean; they don’t have to pound their way through traffic. Their cars are set up to drive either lane! Like Kyle Busch, they know the setup on their cars and what they want done. (Jeanne: We like to watch Dennis because no matter where he starts, you know he is going to be the show. If I could add, our son, Don, has won six modified/IRA/360s championships. He always said, “I enjoy giving the fans a show!” And he always did, just like his dad!)

Special Note from Willie: I would like to thank my family and all those friends who supported me during my rehab time. I could have never come this far without your help and friendship. 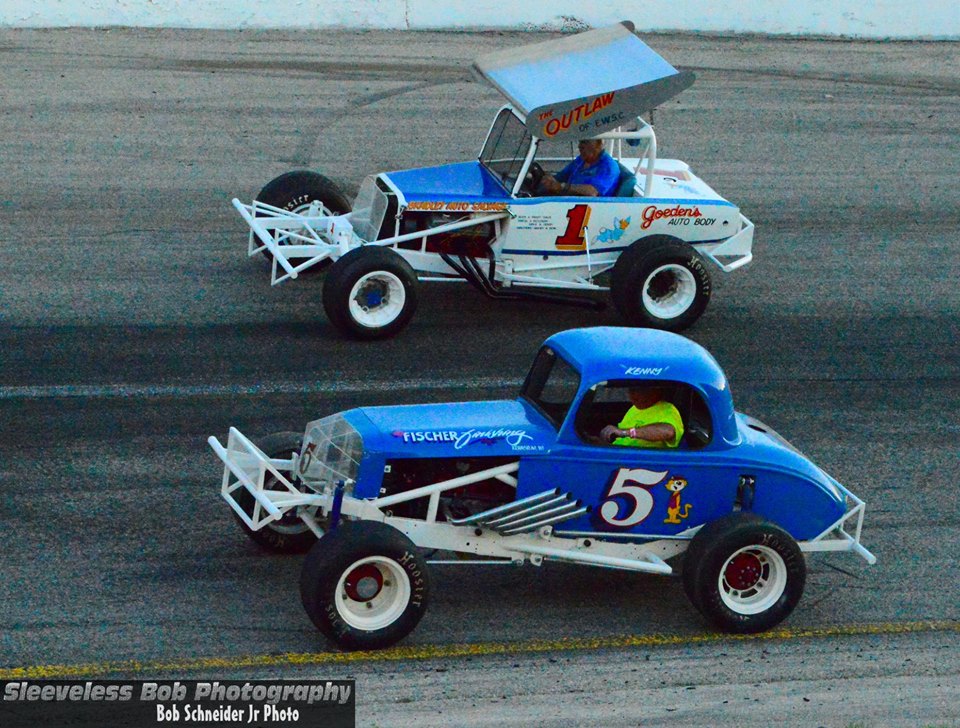 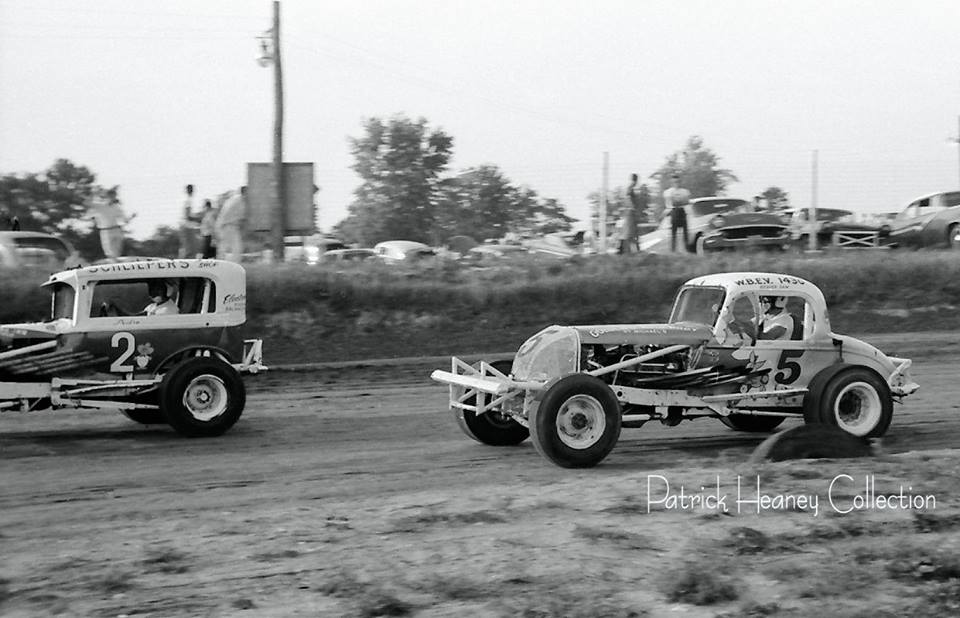 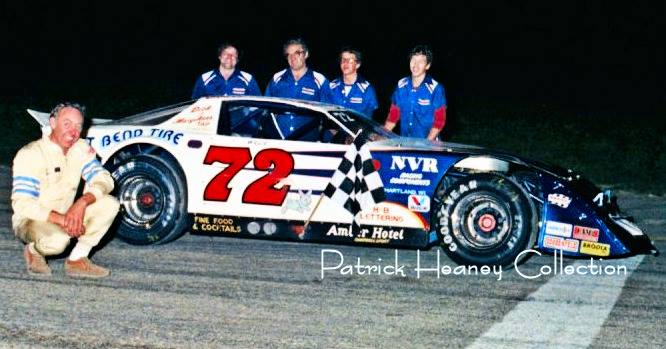