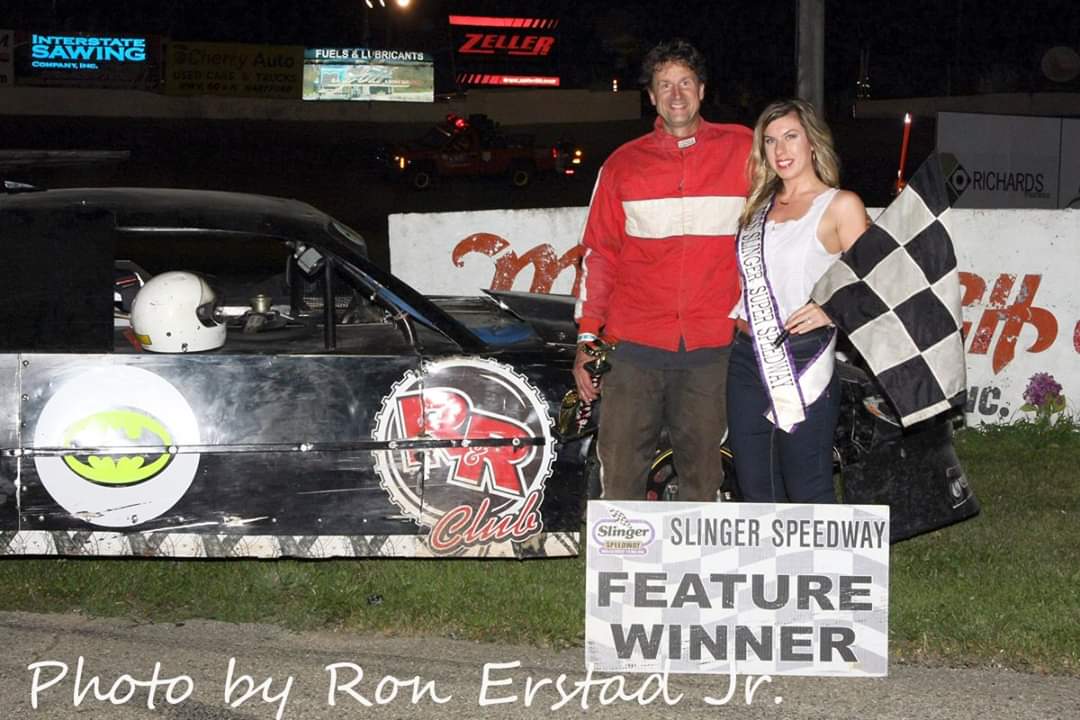 Why did you get into racing?
I started with a Demo Derby and an Enduro, both at Slinger in the late 80’s. That made me want to buy a racecar! The first one was a Stinger (in 1994 or 95). I bought it on a Saturday from Birdie Shong, and bought a trailer on Sunday morning. That night I took it to Slinger. The races started at 7, so I got there at 7, not knowing there was practice. Actually, I was late as usual, so I got there after 7. I backed it off the trailer and having never driven it before, I didn’t know the gas or brake. I ended up flooring it instead of hitting the brakes and spun gravel all over everyone. By then the race was starting, so they told me to “get out there!”. I didn’t have my belts fastened, or my helmet strap either, but took off for the track. Oh, and my window net was waving out the window! Lumpy was standing there, waving me on. Or at least that’s what I thought he was doing (he was actually trying to point me down to the track entrance) as I drove by him to enter the track thru the exit DURING the race! After awhile cars started pulling off the track, so I figured the race was over and pulled off too. Lumpy stopped me and asked, “What in the hell are you doing!?!? You were black-flagged every lap, but just kept going!” Then he grabbed my window net and asked why it was hanging down outside the window – “this is supposed to be up here!”. All the while he was talking to me, I was trying to keep my chin down so he wouldn’t see the chin strap on my helmet dangling unattached. My belts were just kind of tucked in, so I hoped he wouldn’t see those were unfastened too. That was my first real race, but I won the championship in 2000, so things did get better. Later I moved to mods for a couple of weeks, then super late models, then late models. I bought my first super late model from Jim Schmittinger. He let me practice it at Madison, and I wrecked it pretty bad. And I still hadn’t paid for it! (But of course I did still pay him for it!)

Who is your favorite NASCAR (or other pro) driver?
Matt Kenseth because he is a Wisconsin driver. But I like the local short tracks better.

What do you like about Slinger Super Speedway?
The people. The fans. The track. The racing. The competition–the fairness of it. The location-it’s close to home. And the awesome racing.

How did you pick your car number (#0)?
I’ve had so many different ones…40, 20, 0, 1, 18! The first one came on the first car I bought; 40 was Birdie Shong’s number. That’s usually how it’s chosen – it comes on the car. For the #1 it was because it was the easiest number to duct tape onto the car at the track. The #0 on the Figure 8 car is because the bat symbol fits perfectly inside it.

What is your “real job”?
I’m a tool and die worker/CNC programmer at Gruber Tool & Die.

What prompted you to make the jump to the Figure 8 division?
Mainly time and money constraints. Racing Figure 8’s is a lot cheaper and doesn’t take near the time or manpower. I can do things with my family and not get to the track until 7-8ish (I like to get there earlier to see more races, but it doesn’t always work out). Plus, I’m a hack and like to weld things together just to make them work. With super late models/late models you have to be so precise; I like to just make things functional.

If you could have dinner with any three people (alive or dead), who would they be?
God. My mom, Ann Shavlik, who passed away six years ago. My Grandpa Shavlik, who died when I was really young.

What is your favorite memory at Slinger Speedway?
Winning my first Figure 8 race, three or four years ago. I was running for my life! I started at the front, was driving a car I bought from Jason Sharpe, and it was my fifth time out!

Who do you need to thank?
Crew: There have been so many over the years! Sandy Shavlik, my sister-in-law, was one of the first. My brothers, Mark, Mike, and Paul. My wife, Becky. My nephew, Jake Shavlik, and his buddies. Chad Aker, Shawn Roethle, Dave Fuller, Jeremy Simonson, John Maramonte, Rick Lorbiecki, the Prunty’s, Chris Ratajczyk, Bob Boesch, Dan Jung, Scott Hackbarth, Jason Sharpe, and Shane “The Shark” Becker. I’m sure I’m forgetting many…

Sponsors: None right now, can you put “desperately needed”?

Anyone else: My wife and kids, Kristal, Brady, and Renna because I spend time away from them when I’m racing. Ryan Lovald, Nick Ostberg, Jason Sharpe and Shane Becker for helping me set up and unload/load my car.

Which Slinger driver (past or present) do you have the most respect for?
Shane “The Shark” Becker because he’s a straight-up guy, and because of his passion for Figure 8’s. He always said I should “move up” to Figure 8’s. Also Brad Mueller, Dennis Prunty, and Steve Apel – they are pretty good guys, and are very devoted to racing. 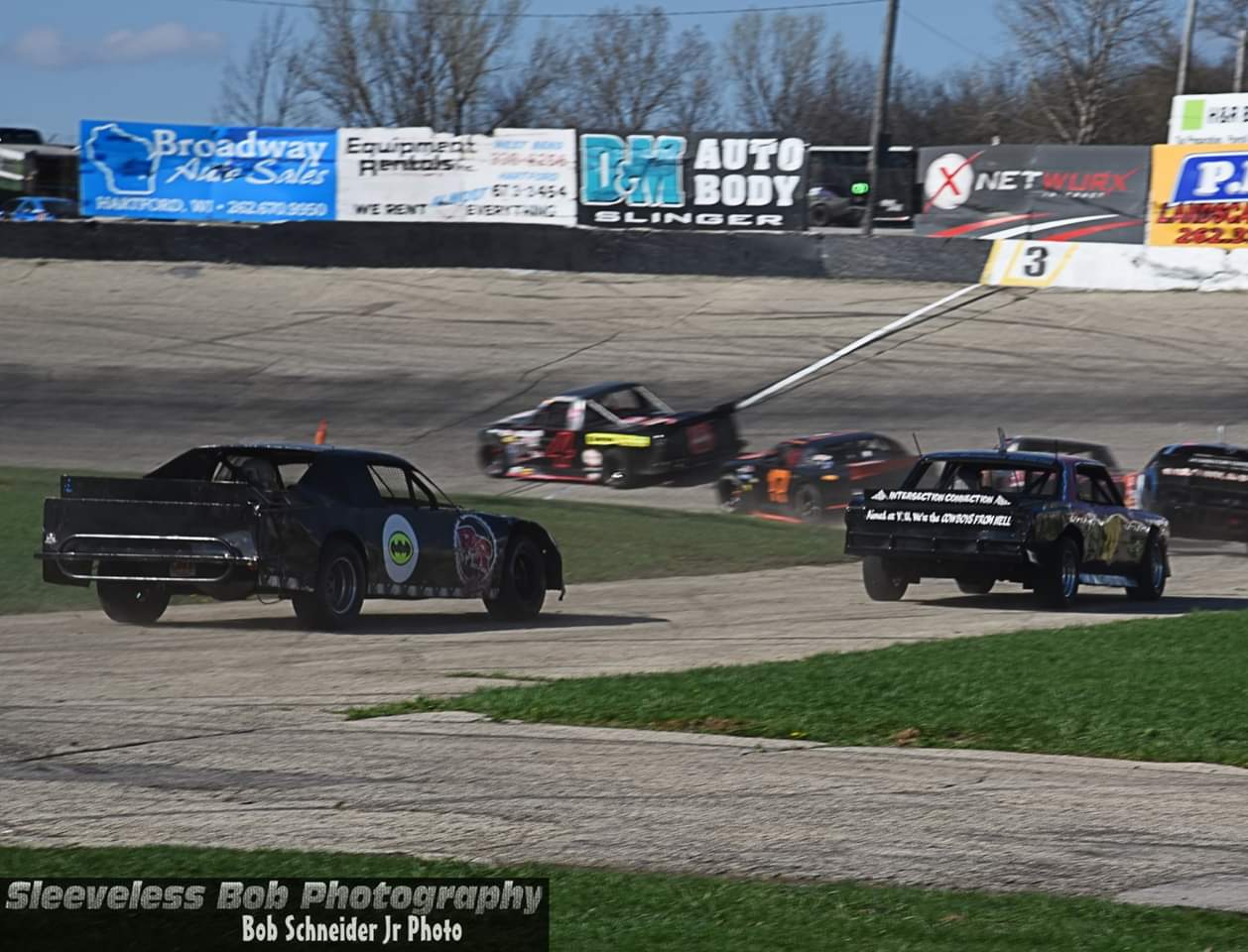 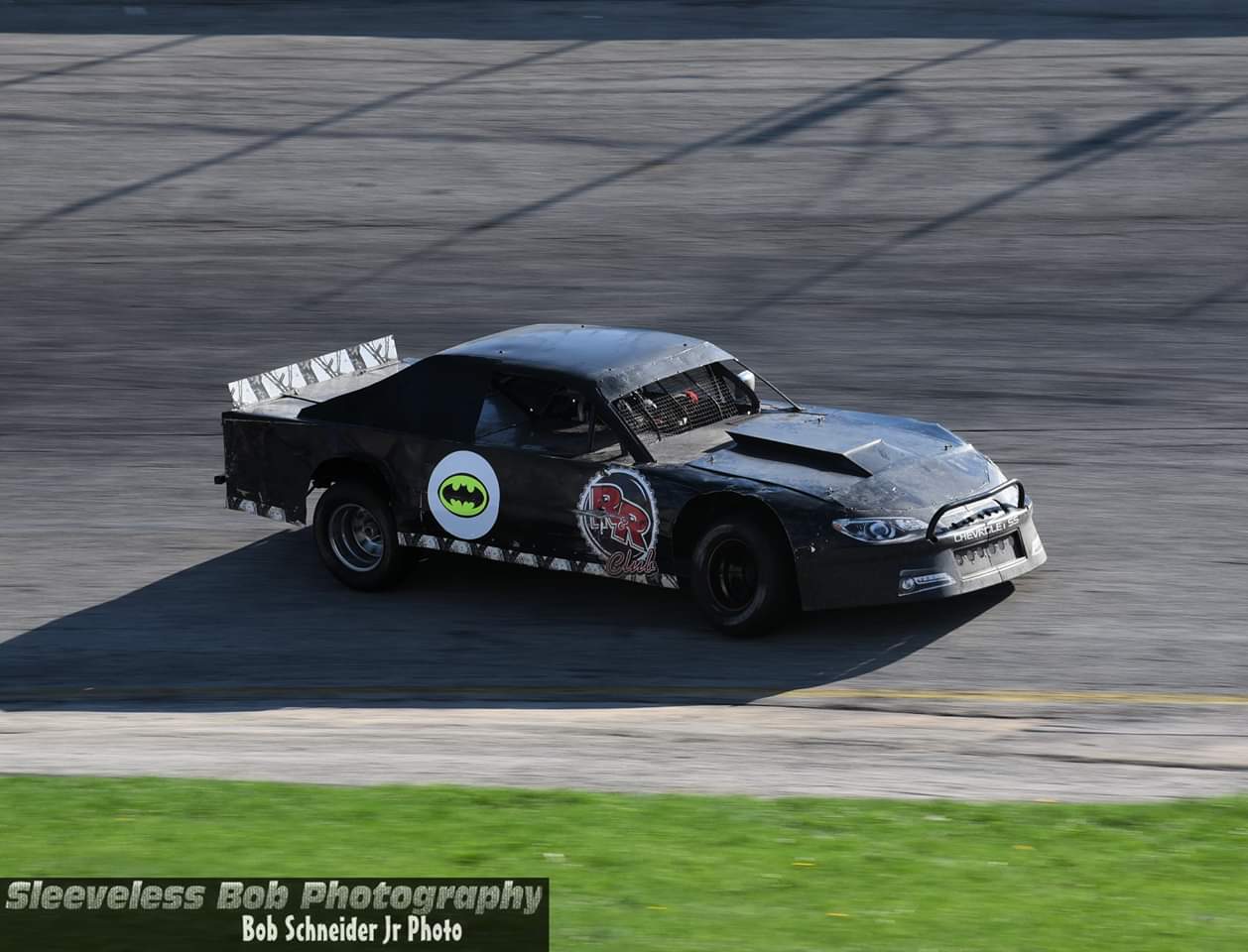