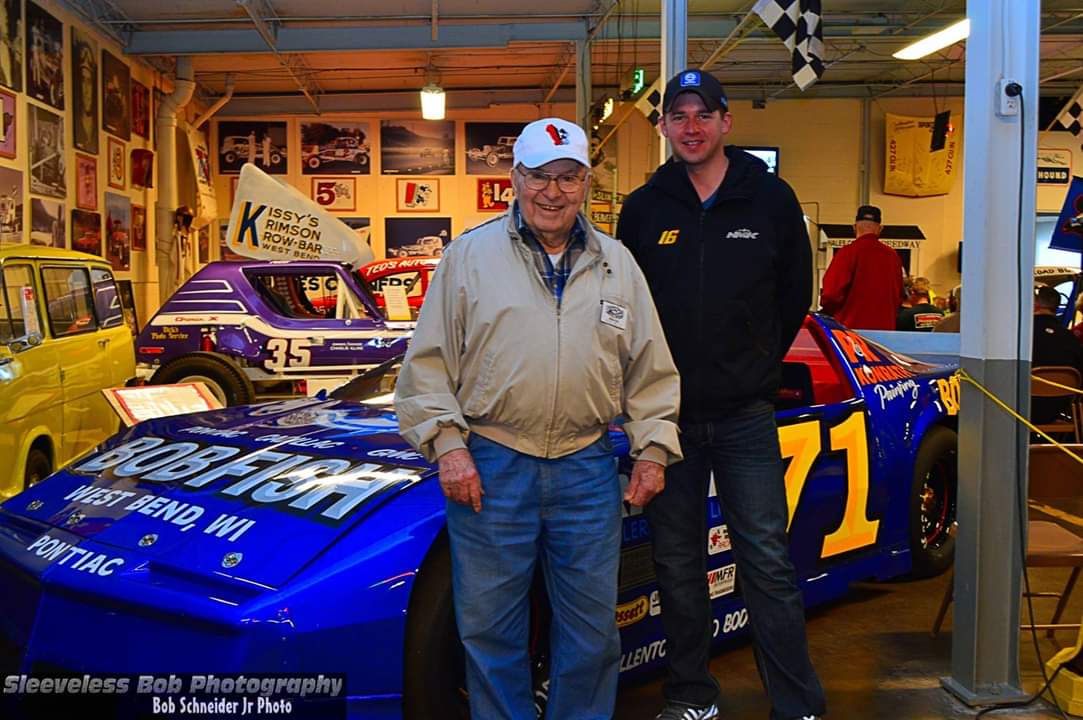 2011 Inductee – Southeastern WI Short Track Hall of Fame
Slinger Speedway Wall of Fame – Class of 2014
(Special thanks to Gene Schwister for his assistance!)

Stop at the Southeastern Wisconsin Short Track Hall of Fame in Hartford today from 10:00 to 2:00 to join Miles “Mouse” Melius’ 95th Birthday Celebration!

Why did you get into racing?
I was conned into it! William Johnson (Billy’s dad) was the Deputy Sheriff (later the sheriff) and he conned me into helping him build a midget and then I drove it for him. It wasn’t much, but we won two features (at Manitowoc and Sun Prairie) that year!

Who is your favorite NASCAR (or other pro) driver?
I’ve always liked Bobby Allison. I got to know him really well, he’s different, really down-to-earth. He’s visited me in Wisconsin a few times. I lived in Georgia for seven years, and he was in Alabama, so we visited all the time then. He even came up here when I was inducted into the Hall of Fame and presented it to me. I also really like Jeff Gordon. I watched him from when he was 16 years old at Sun Prairie in the midgets. He was the first driver I saw there that never lifted. I got to meet him many years later and he’s just a super, super human being. He stays out of trouble.

What do you like about Slinger Super Speedway?
Well, I helped build the first one!

How did you get your car number?
Well, by winning races! You got your car number by where you finished in the standings. After two years in midgets we won the Badger Midget Championship and got #1. We lost #1 when I wrecked at State Fair Park. I was #2, #3, and #8 too. We got #3 when the throttle stuck at State Fair Park one year. I was qualifying, and ended up going over the fence and over a grader then landed on the nose of the car. The frame was bent and I broke a bunch of fingers. The headers came through the windshield, and hit me in the face. That broke my cheekbone and knocked out some teeth. When we moved to stock cars, I was #15 my first year.

Who was on your crew?
Glen Dhein. We called him “Flutchy”. He was my bodyguard. If someone wanted to hit me, it was Flutzie’s job to hit him first.
Harry Woerner. He later married my daughter, Jean.
Bill Schwister

I drove Gene Schwister’s mod for the last three years that I raced. The last year (1967) we won championships at four tracks: Slinger, Hales Corners, Beaver Dam, and Cedarburg.

Who were some of your sponsors when you raced?
Schlieper’s Speed Shop
Ralph & Bob Fucci. They had “The Hot Rod Shop”. I taught Ralph about motors and then we built a really good one.

What is your favorite racing memory at Slinger?
It was my first day racing for Gene Schwister. We had a brand new car, a coupe…that car is in the museum. Before the race Gene asked me, “What do you think?” I said, “I think she’s gonna go like hell!” They had buried some tractor tires along the infield. I was running down on the inside in the south corner, close to the tires, when I got hooked in the back. I hit a tire, ran up it, and rolled over completely.

Why did you stop racing?
I was getting up there in age and worried about breaking bones. When you are over 40, bones don’t heal. You need iron around them to help.

Which Slinger driver do you have the most respect for (past or present)?
Kenny Tlougan. He was the cleanest driver I ever raced against. He could race you all day and never bother you. We were very good friends; I actually worked for him driving oil tanker for a couple of years.

What is your favorite food?
My daughter, Jean, is a super cook. Anything she makes – that is my favorite food! 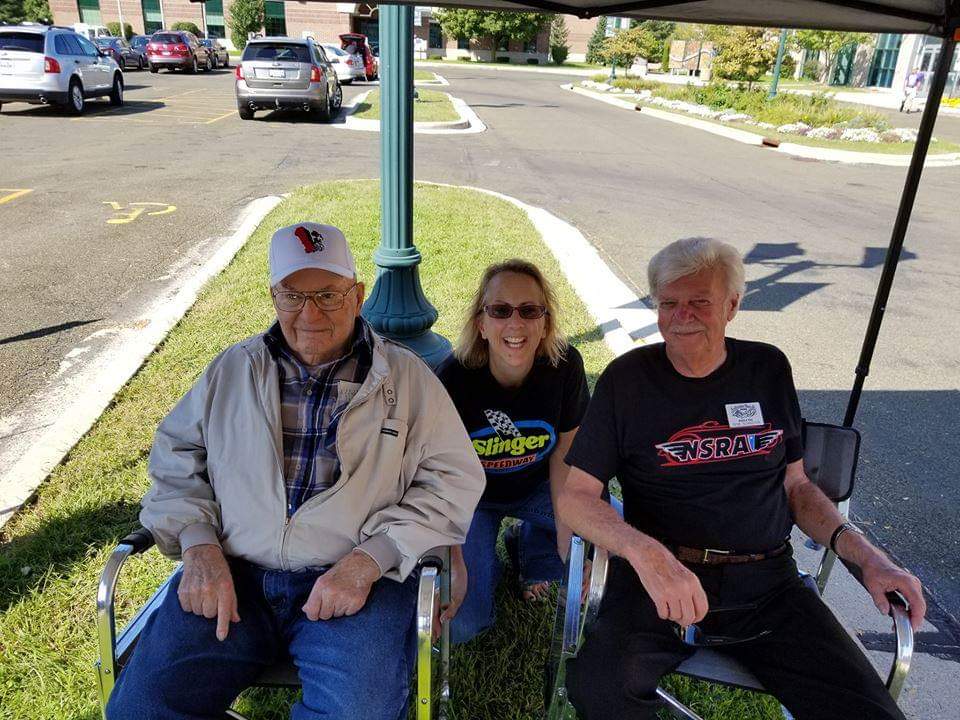