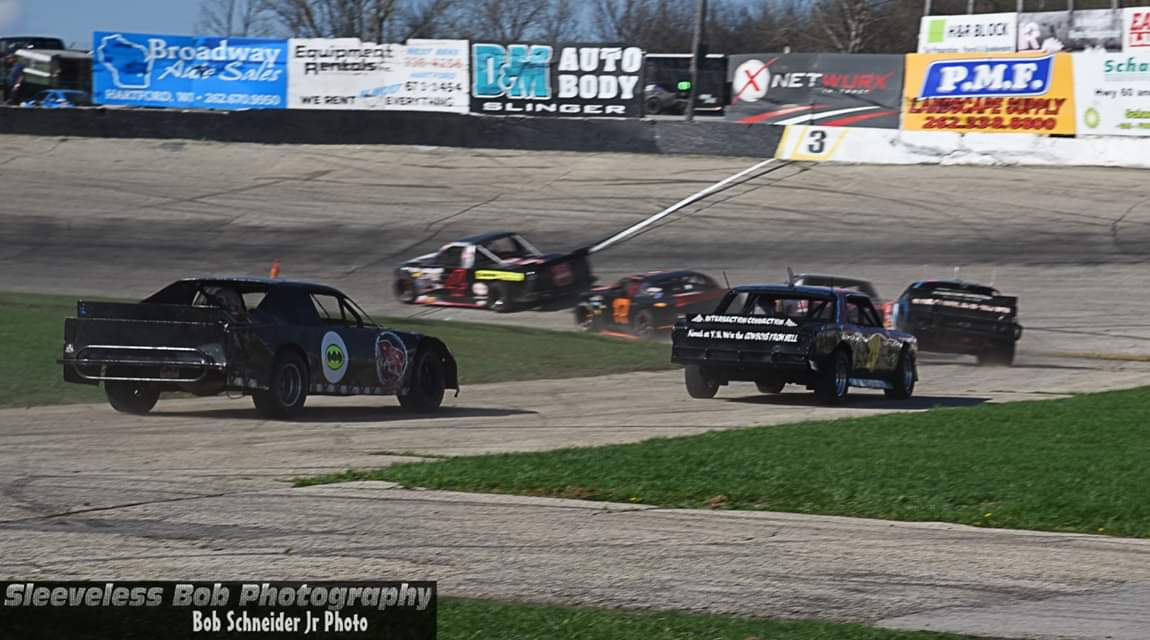 How much will it cost to get involved?
The cost of a figure 8 car really depends on a persons budget…cars can be built for 2,000$ or you can spend as much as 6-8000$. There is alot of used chassis for sale out there so alot of times you can find them pretty cheap for around 500-1000 $ complete minus a engine and trans then depending on your budget you can find a engine and trans for as cheap as 1000$ or you can have a engine built for as much as your willing to spend..the cool thing about figure 8 cars is that a 2000$ car is just as competitive as a 7000$ car but the more you spend the more likely the car is likely to be more durable and hold up to the abuse the cars endure especially when it comes to suspension parts and the engines to last longer. It’s always easier to start cheap and you can always make the car better as you gain more experience and seat time…I myself have 4 cars all ranging from 2000$ to 8000$ in cost and each car is just as capable as winning as the others. Also best thing to do is ask another driver for advice or where to find a car most figure 8 drivers have lots of spare stuff laying around or know where to find stuff at a reasonable cost. ~Ryan Lovald, #67 Figure 8, 2018 Figure 8 Champion

How do all the Figure 8 drivers get along with each other? Are they helpful with new guys starting out?
I get along with all the figure 8 drivers really well , they are a great group of guys and are very helpful with the new guys starting out in figure 8. Of course, there are few disagreements here and there, but that is all part of racing. racers tend to be quite competitive! ~Bill Shavlik, #0 Figure 8

Why should someone get involved in driving a Figure 8?
If someone was to get into a race car a Figure 8 car is a great place to be. Driving one will teach you how to adjust to just about everything that can go wrong in a lap, increase your situational awareness, and where the absolute limits of a car can be. The division rules are so open that building one is made easy. Lastly, they group of drivers that you meet in Figure 8s are not like most divisions, what happens on the track is the track. I havent met a driver yet that wont just sit around and talk before the race, may not tell you their secrets though. ~Nick Ostberg, #1 Figure 8

How often is there an “Intersection Connection”?
“Well to be honest, that’s a good question…Generally speaking, “Intersection Connection” is a term used when moving objects collide at an intersecting path. In Figure 8 terms, this generally occurs when two drivers, whose BALLS are bigger than their BRAINS, don’t let up for each other and end up smashing in the X. “Intersection Connections” can also include (but aren’t limited to): street vehicles, people walking or running, kids in Barbie jeeps…and turtles.” ~Shane Becker, Slinger Figure 8 Champion 2004

How many laps do the Figure 8s run in a night?
The main event for the Figure 8 division is usually 10 laps with a provisions in the rules for more or less laps depending on car count. ~Dale Norenberg, Slinger Scorekeeper

Describe the division, please.X-citement
When ever you talk to Slinger Speedway fan , figure 8 will always come up in conversion. The 2nd oldest division only to the Super Lates, it has always been exciting to watch . From Ritger & the Rat to Lovald & Goetzke , going in to its 38th year of closing out the show we are all figure 8 fans at heart! ~Scottie Koch, Slinger Figure 8 Champion 1985-86 and 1989-90

How many crew members does a Figure 8 need?
“It is nice to have at least one person that can change a tire in the pits if there’s a red flag, but most of the time with only 10 laps, there’s not much time to do anything if you pull off the track.” ~Rick Bruskiewicz, #17 Figure 8

When will the Figure 8s race in 2019?
“Figure 8’s race every Sunday except for July 14th and August 18th. Plus they race Slamfest!” ~Leonard Reimer, Slinger Speedway Pit Director

How would someone find sponsors for their car, to help with the costs of racing?
Most of my sponsors are people that have watched me race for years, or friends. But I have gotten a few sponsors from making my cars original or different. (“The Mack truck”, Lightning McQueen, and now the ‘55 Chevy are a few examples). Figure 8s don’t get a lot of track time so it can be tough. ~Rockstar Russ Lorbiecki, #9 Figure 8

If someone is interested in racing the Figure 8s, how can they get more information?
“Join us at the Figure 8 Informational Meeting on Wednesday, February 20 at 7:30, upstairs at Nite Owls in downtown Slinger or email me at
lynn@slingersuperspeedway.com.” ~Lynn Wagner, Slinger Speedway Public Relations 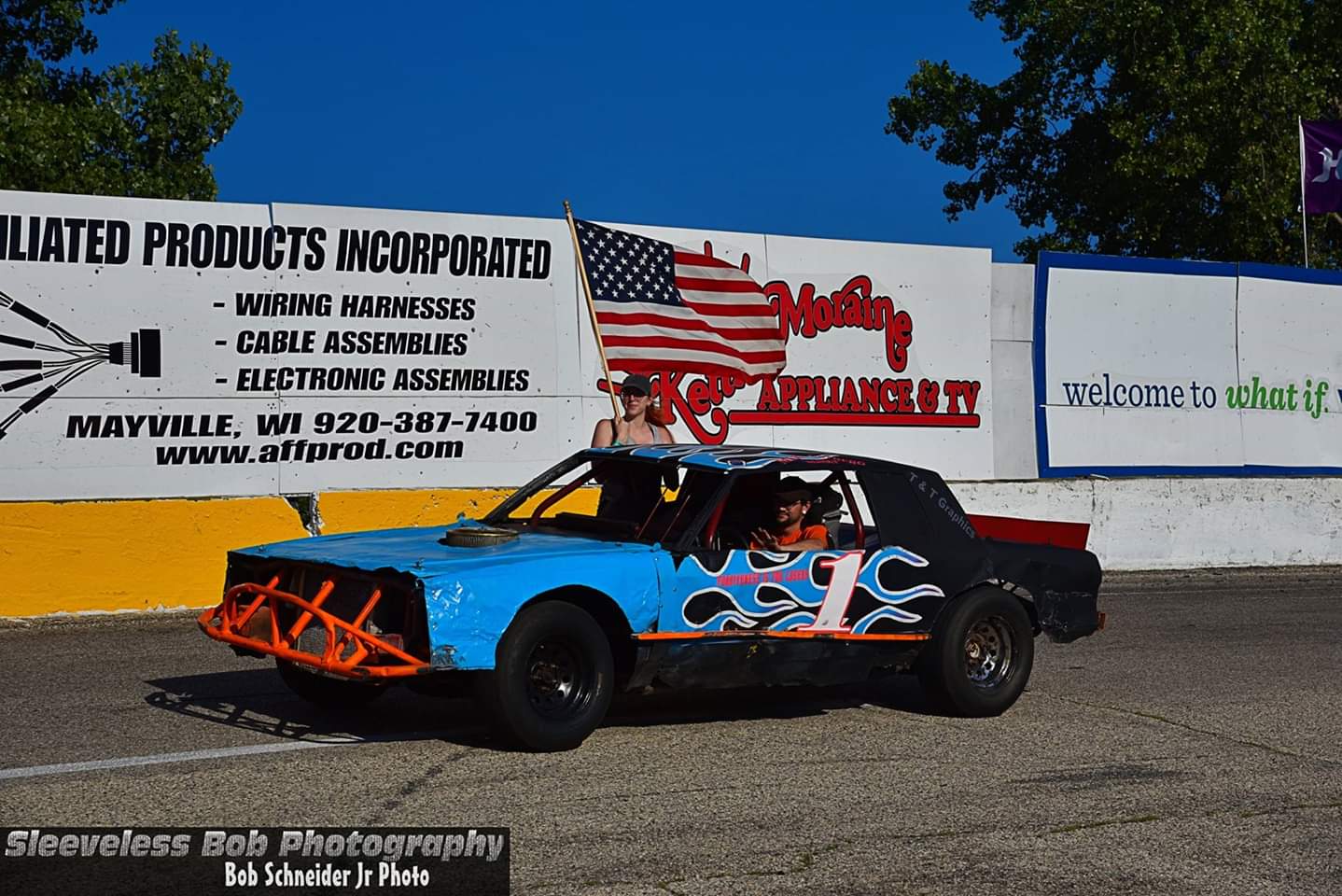 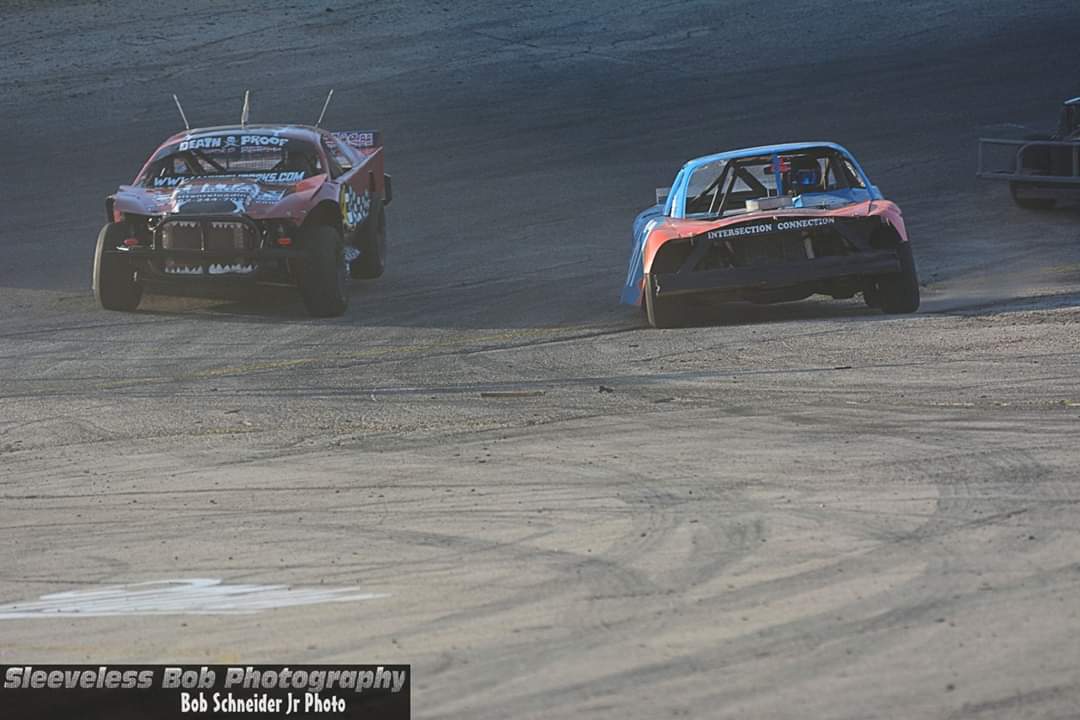