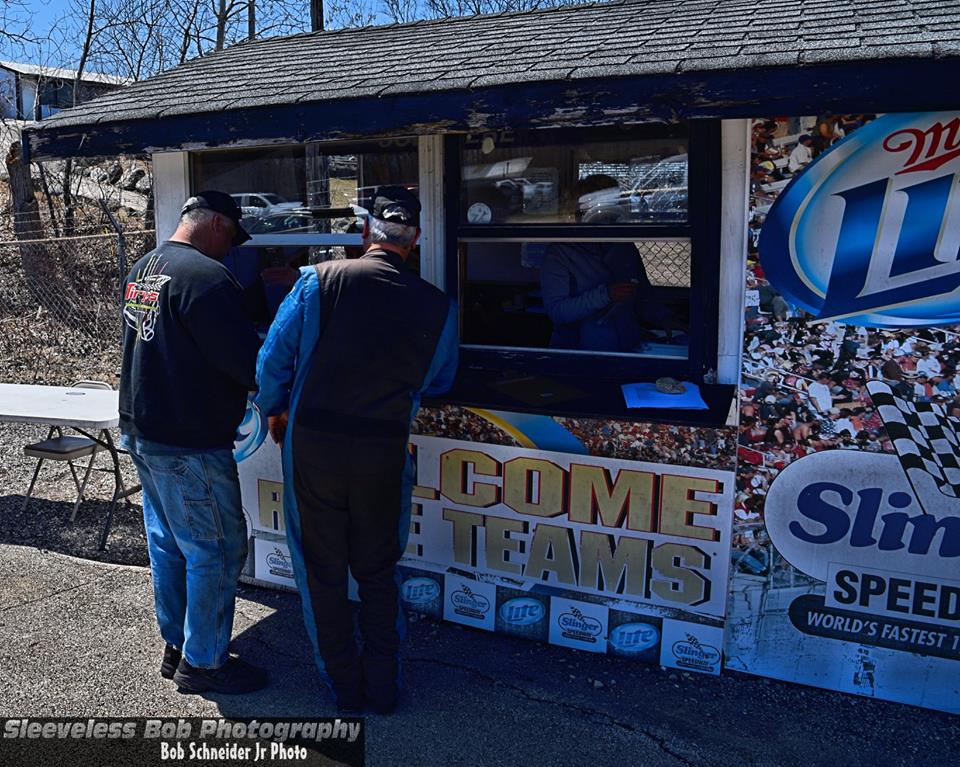 Stop and see Janet today at the 2019 Orientation (10-noon) and Registration (Noon-4) in the Pavilion at Slinger Super Speedway!

How did you get into racing?
Naturally that was through my hubby, Butchie [The “Lil Stinker” of dirt modified fame]. He was kind of on a break from racing when I met him, but we did go to racetracks and watch racing – Slinger was one of them. Then he built a new car, a modified, and started racing again.

Who is your favorite NASCAR (or other pro) driver?
I guess I have to go with, even though he’s not racing anymore, Matt Kenseth because he’s from Wisconsin and because of his ties to Slinger.

How did you end up in the Pit Shack at Slinger?
Welllll, that wasn’t actually my first job there. I used to line up cars and direct traffic on the other end [at the track entrance in turn 4]. I thought I needed a break from it, so I quit about halfway through the year and was gone for a couple of years. Then Todd called when he and Rodney took over, and asked if I would take over the pit shack. This will be my seventh year in there. [Butch currently works the back gate at Slinger also. Other areas he has worked at Slinger include tech, wrecker, jam truck for Enduro, flagman, tireman, and safety crew.]

Tell us about your family.
Well, there’s my hubby, Butch – we are going to be married 24 years in July. He has a son, Billy, and a daughter-in-law, Jenny. Then there are our fur babies, Pepe and Blackjack [cats].

You are kind of “famous” in Campbellsport for your Christmas decorations. How did that get started, and are they all down yet?
(laughs) No they are not all down yet; we took down the lights last weekend. You may not know this, but we decorate inside extensively too. This year there were 25 trees of assorted sizes. Butch has his “checkered room” and most of them are in there. We bought our house in ‘92 and had the signing on December 11. I said, “If we get a tree up, I’ll be happy with that”. We had one real tree that year. After that, we added little by little. In ‘93 or ‘94 we started doing the outside and it has kind of progressed throughout the years! Butch uses a lot of his vacation in November to put the lights up outside of our house, plus displays around the village as a Lion’s member – the Lion’s buy it and he puts it up.

Is there anyone you want to thank?
Jeanne and Willie Goeden – They kind of were the ones that helped us get into Slinger as far as working. They are like racing family to us. [Butch currently works the back gate, and has worked in tech as well.] Sid Seidl – We miss working with him.
Todd and Elizabeth Thelen – For being so understanding

What is your real job?
I’m an administrative assistant at BesTech Tool in West Bend (behind Wal-Mart). I’ve been there two years in February. Before that I was working in Milwaukee; this drive is a lot nicer.

What is your favorite memory at Slinger?
Way back, when Ernie Irvan used to run Nationals. I was a spectator then. I don’t know why, I just thought he was so cool.

What TV show(s) are you into?
Ohhh, where do I start? “Chicago Fire” is one of my favorites. Plus “This is Us”, “The Voice”, “American Idol”. [Follow-up question: Do you sing?] I like to do a variety of songs. I do a lot of The Carpenters – I do five of their songs that Butchie likes, plus Carole King, Carly Simon- “You’re So Vain” and I’m working on “Anticipation”. We follow Mike Thompson from Extreme Karaoke.

What do you like about Slinger Super Speedway?
Everybody that comes in the pits for the most part is pretty nice. They are ready and rarin’ to go on Sundays! It’s like family, like anything, you look forward to the next week, but don’t know what’s going to happen…hopefully all goes well and everyone has a good night. I’m looking forward this year to seeing who is all coming back as far as racing – hopefully most. People move on and you kind of miss them. They are racing family; I like to shoot the shit with them.