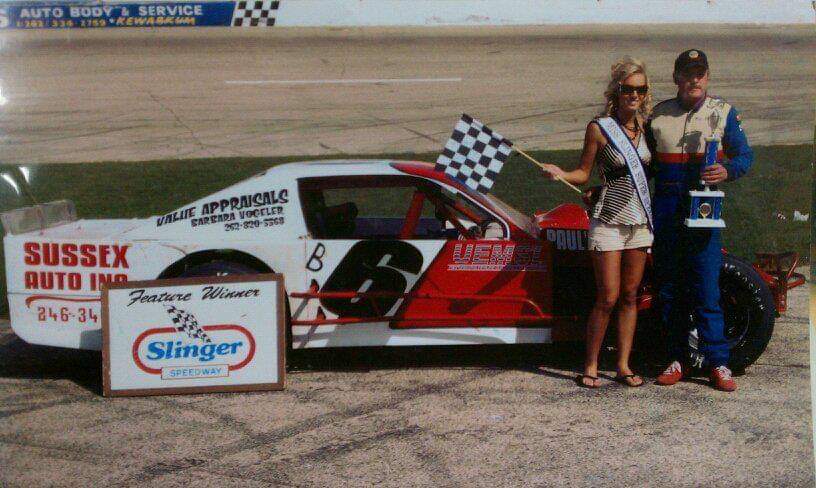 10) TODAY is the Memorial Go-Kart Swap Meet and Wes Biswell Memorial Car Show at Kettle Moraine Bowl in Slinger from 9:00am to 1:00pm. Admission is FREE! Look for the Slinger Speedway “booth” for the first chance to purchase Bar Car driving opportunities! Regular Sunday –AND– Nationals tickets (Meet & Greets too!) will also be available for purchase (cash or check only).

9) This event is also a fund-raiser for Memorial Go-Kart, a great program that gets kids into racing; they are the future Slinger Super Speedway racers! Go to http://memorialgo-kart.org for more info.

Justin Poenitsch
Wes was a guy that I think a lot of people got along with and when he passed his funeral was like a big racing reunion. I even remember car body parts spread throughout the funeral home. The idea of the annual car show in his memory came from me learning at his funeral how much he was a general automotive enthusiast along with the whole racing deal. It, in a way, summed up my philosophy for the whole event: bringing racers and general automotive enthusiasts together to find a common bond…and maybe even make an unplanned trip to a racetrack they’ve never been to!

Joe “Napa Joe” Osterman
Anyone who was a friend of Wes Biswell knew that when it came to racing on Sunday, not much was ever going to stop him from getting on the track. This was the case in April, 2007 on the night before the first race of the year at Slinger Speedway. Wes was doing his normal Saturday night routine of getting his modified ready for the race the next day at Slinger. He was in the process of changing the oil when he noticed some shiny metal chunks in the oil filter screen. His heart sank, these were some sizable pieces of metal that could not just be ignored. Wes called me up and I flew over to his place. We shortly came to the conclusion that it was something major that needed the attention of his engine builder. Wes was really disappointed. Not only was it looking like he wouldn’t be racing, but it would have put him in a hole for the season points standings right off the bat.

We were about to call it a disappointing night when Wes looked at me with that, ”I’ve got a crazy idea that involves us getting no sleep” look. He says to me, “How long do you think it would take to get your car ready to race?” Now, my modified was in my garage in pieces. It had not been touched since it was disassembled after the 2006 season. Of course, without hesitation we jumped in the truck and headed over to my house. At 9pm on Saturday, before an early day race, Wes, Troy and I started a process that you would normally start in January or February. Wes worked at a lightning pace, getting the suspension put back into the car while I worked on getting the fluids changed and the engine ready to fire. Around midnight to 1am, we had it on the ground and we fired it up. We loaded it in his trailer and headed over to his house. After getting it into his garage we changed out some springs and started setting up ride heights, scaling and setting the valve lash. Between 2am and 3am the car was as done as it was going to get. The next morning Wes and Ben loaded the car and off to Slinger they went.

After an almost all-nighter with next to no sleep and some prayer, Wes went on to win the modified feature that day at Slinger Speedway. He did it in a car that he had never before driven, and that had been in pieces 14 hours before the race. It wasn’t a big Nationals win or an end-of-season race for the championship win, but it was one of those wins that no one in the stands would ever realize what it took to be there and why it was so special.

We raced at a fall special at Lake Geneva Raceway with a group of cars from other race tracks. There were three cars racing for the win in the feature. Wes and I ran wheel-to-wheel for several laps before I was able to get past him on the outside. About five laps later, the engine in my car let go. Wes ended up finishing second in that race, getting beat by a dirt car. He was not happy with finishing second to a dirt car…. LOL. Wes was a great friend and competitor that we miss at every race.

Jeff Hassler
#23…Super great guy! I hung out with Wes a lot over the years. His parents, Bill and Rosie, owned The Roadside, which is now Joe Mama’s. Wes and I used to ride dirt bikes and 3-wheelers on Lake 5 in the winter; he could wheelie his 3-wheeler all the way across the lake. I helped him when he raced his modified at Slinger. He was a quiet guy and a very funny guy at times. He really loved racing. It was a sad day when I got the news of his death. Like I said, he was a great guy – a genuine friend for sure.

Jared Apel
When Steve and I were like 8-10 years old, our parents would take us to The Roadside. Wes always had his race shop door open. We would go in there to talk with him and he would let us sit in the car. That was something I always looked forward to when we went out to eat.

Steve Schulz
I was trying to come up with a funny or interesting story involving Wes, but I kept coming back to the time in my first year of racing when we wrecked the modified and were trying to get it back together for the following week. Even though Wes was a competitor, he helped me out with a great deal on some parts and with reaming out some spindles. We did make it out in time for racing that week. He was always a great competitor and a clean racer that was a lot of fun to race with. I was a crew member at the time, but I also remember around 1995 or so it was always the Wes Biswell Miller Genuine Draft car against the Jerry Stenstrup Budweiser car. It was always a blast to watch the Miller-Bud shootout!

David McCardle
I don’t have a story per say, I looked up to Wes, not because he was flashy, because he wasn’t. Not because he had a bunch of money or fancy equipment, because he didn’t. Wes worked hard on his stuff and beat guys way better stuff. He was a real racer. He was so quiet, never said much. He helped me a lot when I started out, he was the guy I could ask those dumb questions I always had, or if I needed an idea on something. Just a good, genuine guy, soft-spoken, but would race the shit out of his cars. Great family man. He was always so proud of his kids’ accomplishments; I’d stop over and there was always something one of the kids did he was proud of.

Troy Martingilio
Wes Biswell, one of the Slinger legends whose name will live on for eternity. How do you pick just one memory of all the amazing moments (good and bad) spent with the man? I chose to go back to the beginning and share the story of how I met Wes. Way back in the dark ages of the year 2001 (yes children, electricity had already been invented), my wife Pam & I moved to Sussex, or more specifically the Town of Lisbon just north of Sussex. Turns out, the house we purchased made us next-door neighbors with the Biswell family. We knew the name Wes Biswell from our many Sunday night visits to Slinger, but had no idea what kind of person he was, what his family was like, or even what he looked like for that matter. Fast forward to the year 2004, when I made the decision to try my hand at racing the high banks of Slinger Speedway for the first time. I had put together a “bee” from a salvage yard find and Pam & I headed north for our first practice day at the track. Now mind you, we have lived next door to the Biswell’s for three years now but have never spoken a word to them; an occasional wave in passing was the extent of our communication. In fact, at the time I’m not even sure if I knew what Wes looked like, we probably could have passed on the sidewalk and not known who each other was. So as we are heading north on Hwy 164 to Slinger driving a borrowed decommissioned ambulance pulling a borrowed trailer (thanks Mike Rose) with my pride and joy new race car on it, I saw something in the rear view mirror that caught my eye. I said, “Honey, I think the neighbor is behind us” and behind us he was, black Chevy dually belching black smoke and coming fast! I pushed that old ambulance as hard as I could, but it was only a matter of minutes before the front bumper of his truck was inches from the back of my trailer, and stuck there for the duration of the trip to the track. Now, this being my first time as a “racer” to the track, not knowing where to go and with this “legend” on my bumper making me nervous as hell, I pulled the rig into the spectator entrance and thankfully he blew right on by and went into the pit entrance. I turned around and followed suit, made my way to a parking spot in the pits and started unloading. About three minutes later Pam says, “Uh-oh, I think the neighbor is walking over here” and I look up just in time to see a man walking with purpose directly towards me. All I can think at this point is great, this racing legend is going to chew my ass for slowing him down and tell me I should have pulled over and got out of his way. He walks up to me, cracks a big smile and says: “Aren’t you my neighbor? I didn’t know you raced!” I replied: “I didn’t until today!” He shook my hand, wished me good luck and hustled back to his pit. That was it, that was the start of a friendship that literally wore a path through our back yards from garage door to garage door. That was the start of many late nights working on race cars, sleepless nights wondering how to make them go faster, and fun nights at the track. It was also the start of getting to know the family, getting together for cookouts, birthday parties and lazy summer afternoons hanging around the pool. I am happy and proud to have known you, my friend, the “often imitated, never duplicated, infamous Wes Biswell” may be gone but certainly not forgotten. Until we meet again. 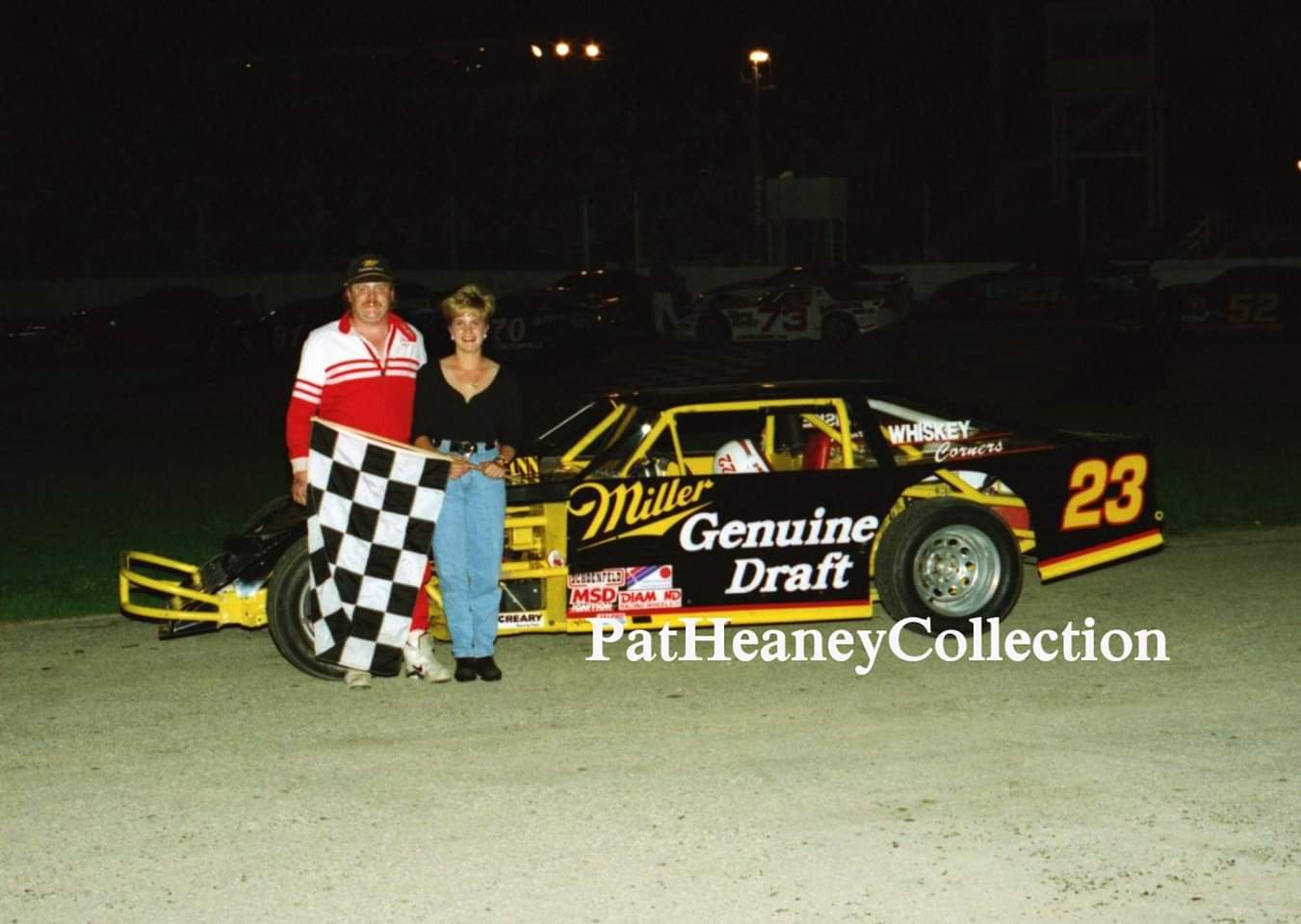 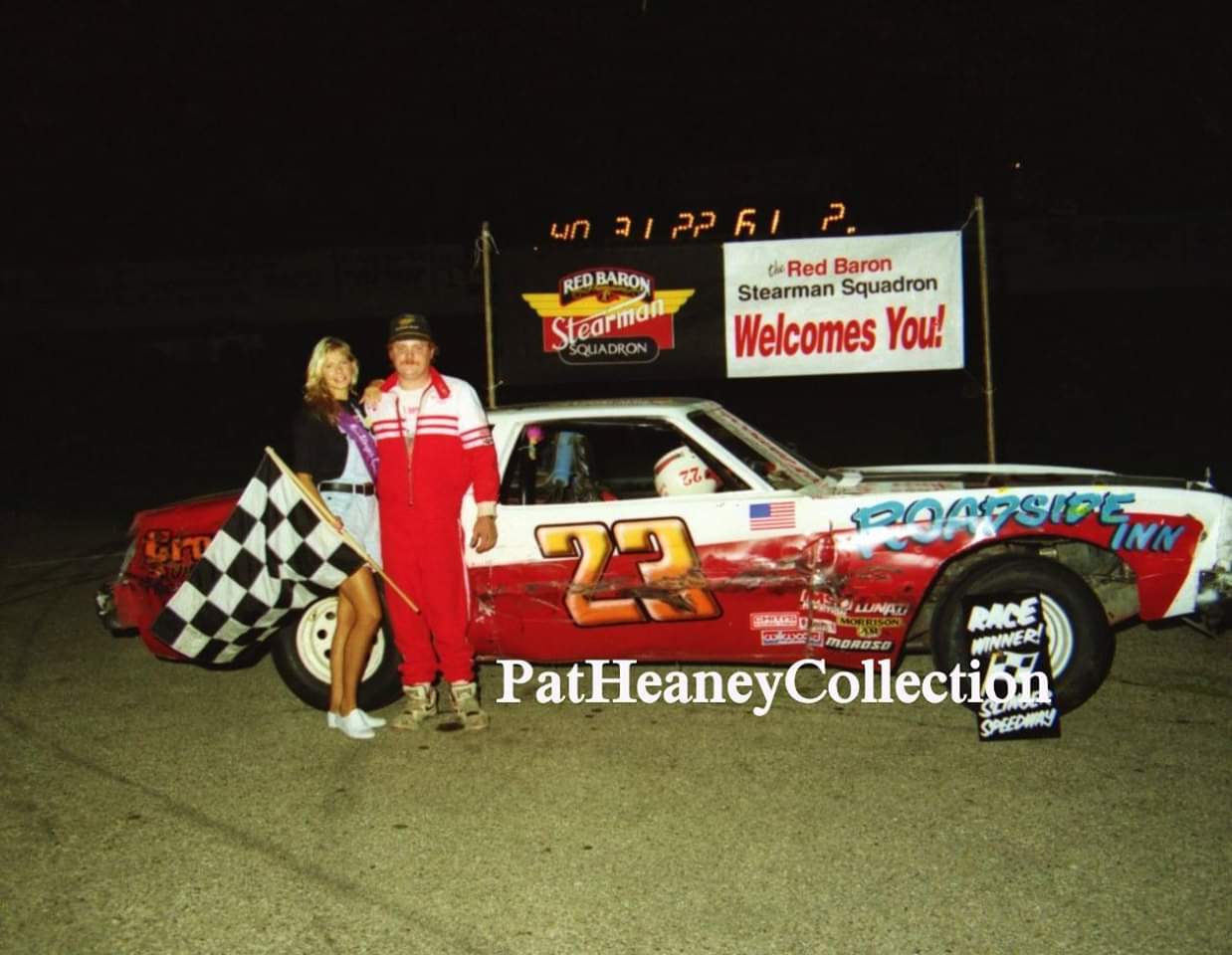