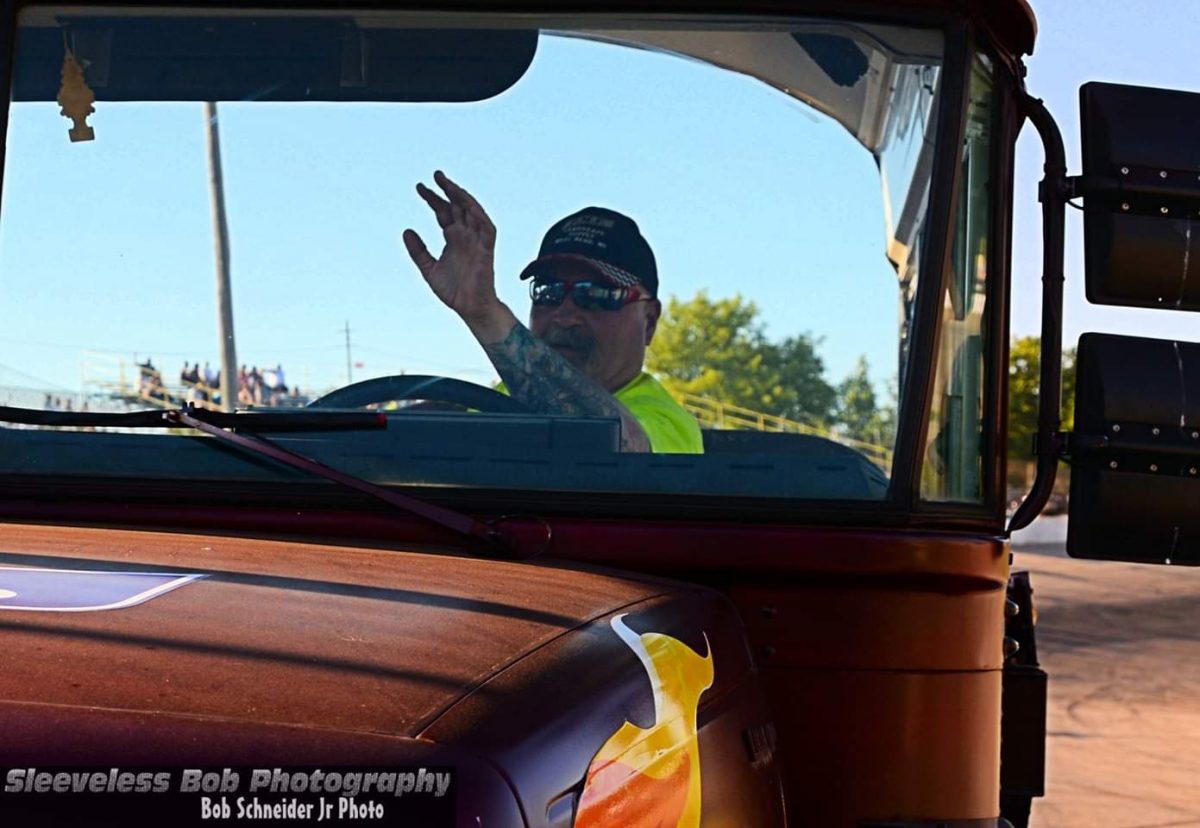 How did you get into racing?
I’ve always been a gearhead, always had fast street cars and rode Harleys. I used to hang out at Great Lakes Dragaway, Hales Corners and the Kaukauna drag strip. In 1980 I moved here and started going to Slinger. I watched everyone from Trickle to Bickle….Bobby Allison…Rusty Wallace…Kenseth when he was a little kid. I also watched Harley drag bikes when I had time.

Why do you sponsor racecars?
Because I’m too old to race! I do it because I know it helps them out. [Follow-up question: Do you think you get your money’s worth out of sponsoring?] I don’t look at it that way. I like getting my name on the car and people talking about it. When I’m in the pits at Slinger, there are a lot of guys thanking me – that’s cool.

What was your first car?
A ‘55 Pontiac – light blue [What happened to it?] It just wore out. I’ve always been a Chevy guy; it’s what I grew up with. I build really good street motors – I had a ‘66 Chevelle with a big block and had it set up for that era – early 70’s – it was a ground pounder! That car is still in Milwaukee somewhere. I’ve had lots of cars and pickups – too many to mention. The one I love to drive right now…my favorite old-time car, is a 1952 Chevy Pickup. That’s the most fun to drive around. And when I have time, I like to hop on one of my Harleys and go for a cruise!

What do you like about Slinger Super Speedway?
I’d say what most people say…the intensity of how fast they go and how alert they have to be….the total concentration, fast-pace, and the sound of the cubes of the engine!

What is your real job?
I was always a gearhead, fixing stuff at my dad’s house, then at my buddy’s gas station. After that I started as a heavy equipment mechanic and then went into an apprenticeship for the Operating Engineers. Later I bought a dump truck and started landscape stuff. I did side jobs hauling material and a little bit of decorative stuff. In 1980 I bought this farm in West Bend, and it kept growing from there into what it is today [PMF Landscape Supply].

How did you get your nickname?
I don’t know; I’ve had it since I was a little kid. Probably because of the way my name is spelled – somebody flipped the f-o-r-g around to f-r-o-g. There was another Paul in my neighborhood, and they started calling him “Pauli-wog” and me “Frogy”.

What are your most memorable moments at Slinger?
When Marty flipped upside down….no, I’m kidding. In 1987, Dale Earnhardt and Neil Bonnett were there for the Slinger Nationals and Bonnett hit the wall in turn three. The race was red-flagged for 45 minutes so they could fix the wall. It’s always fun, too, when any of the guys I sponsor win a race.

Earlier in this interview you mentioned being in a rock band. I think the Slinger drivers and fans will want to know more about this…!
I played guitar and did background vocals in a rock band, “The Shame”, when I was a teenager. We played in Battle of the Bands in the ‘60s, many Friday-night CYO [Catholic Youth Organization] dances, and lots of teen and beer bars around Wisconsin. I wrote songs with the drummer, and we made a couple of recordings. I still have them somewhere. Then everyone just kind of went their own way. I still play guitar; I’ve played since I was 11 years old. I’ve always been a music guy; my first concert was in 1967 at the Arena seeing Vanilla Fudge. My ticket was $4.50, and we were in the fourth row on the aisle – the whole band went. There was an article in the “Milwaukee Journal” about the band being so loud they did damage to the building. We just laughed! The wall of amps was ridiculous, but fun!

Which Slinger driver (past or present) do you respect the most?
Lowell Bennett because of his non-aggressive race style; he’s a gentleman driver. Plus some of the veteran drivers like Jerry Eckhardt, Conrad Morgan, Fred Winn, Mike Egan, Rob Braun, and Brad Mueller. There are also lots of new, upcoming Super Late Model and Late Model drivers that are all great racers – there’s too many to mention. I have lots of respect for Dennis Prunty also, for his knowledge of racing and because he’s a hard-core driver. 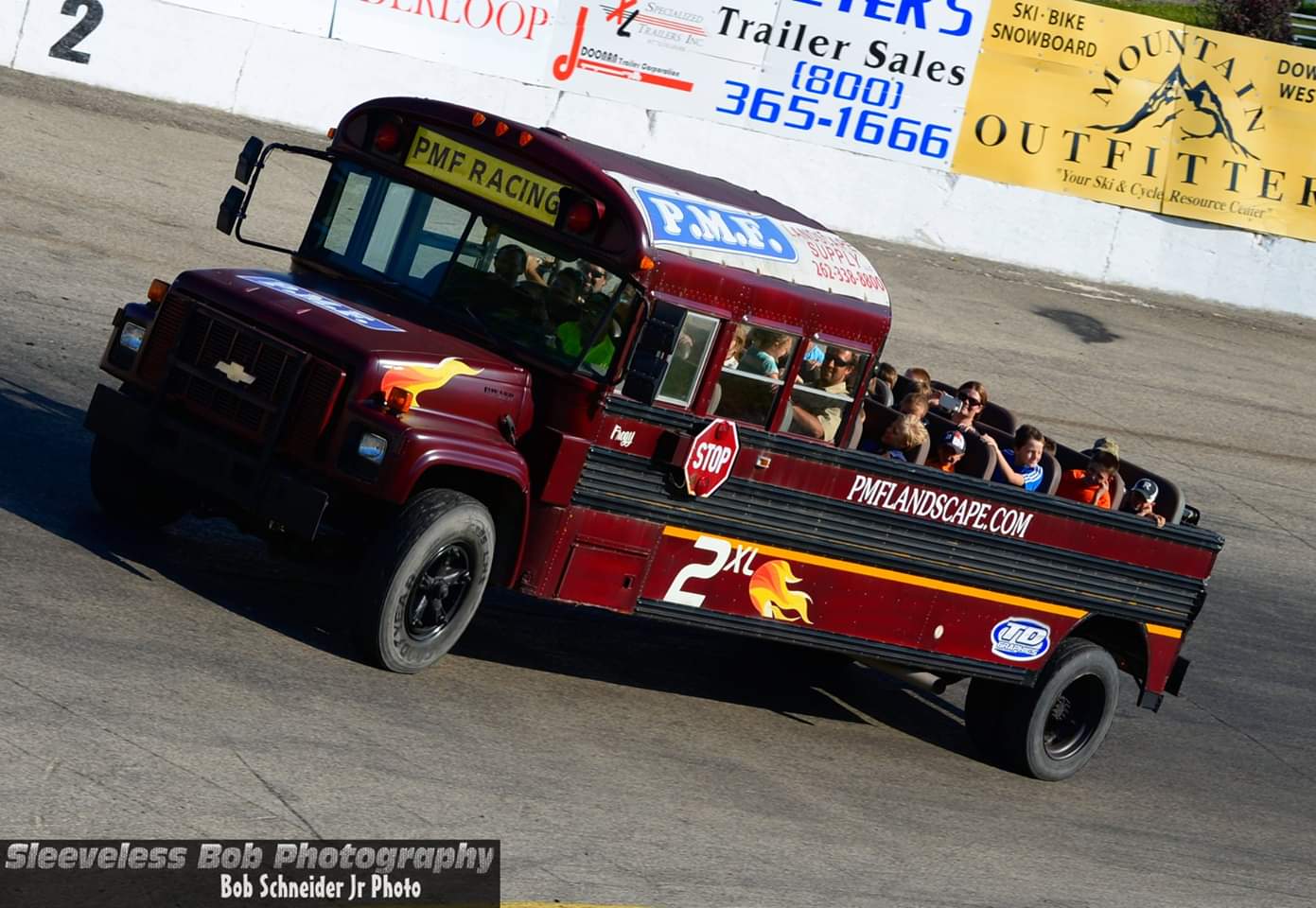