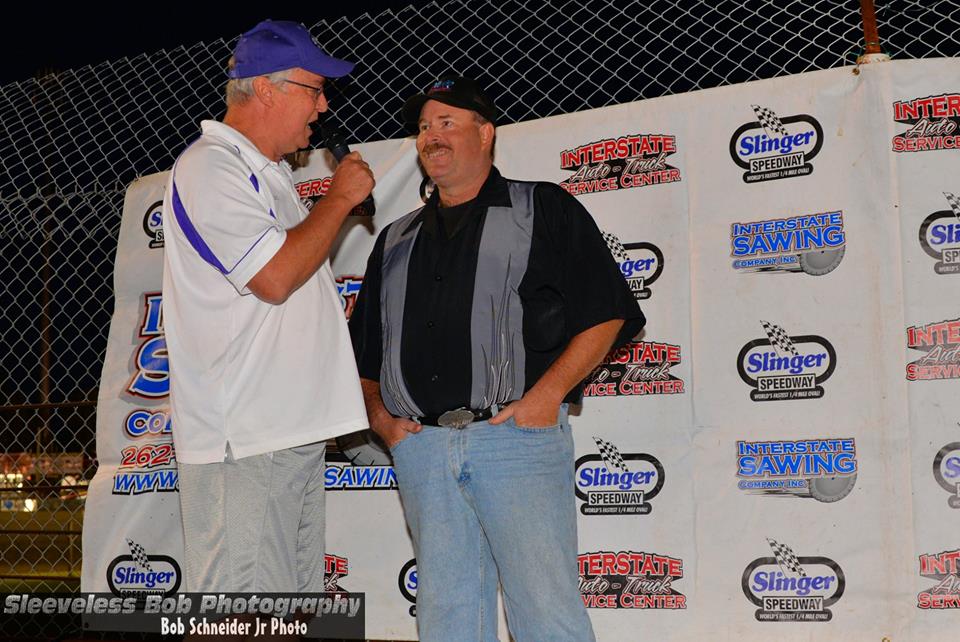 Scottie and 75 other Slinger Speedway Champions will assemble for a group picture tomorrow at 1:30 by the flagstand at the Potawatomi Hotel & Casino Season Opener!

What have you been up to since you stopped racing?
I haven’t stopped! My duties have just changed from when I was a driver. I’ve been a crew member, an engine builder, and a spotter (for Tyler Hromadka for the past four years). I quit driving, but I didn’t quit racing.

Why did you stop driving?
Finances were slim and I had a bad wreck with the mod in ‘94. I hurt my back pretty bad, and the doc said I probably shouldn’t do that anymore.

How did you get into racing?
I’m a second generation racer; my dad raced midgets and jalopy cars. He ran a Texaco Station at the corner of Beecher and 84th Street, so his number was 84. I used that number too, or sometimes 48. Unfortunately, he was never able to see me race. I started here in Spectators in the late 70’s/early 80’s, then started putzing a little in Figure 8s before hooking up with Jim Kannenberg. That man would bring lots of cars to the track. Some people would laugh at the “junk”, but he gave lots of kids a chance to race! Then in 1987, he had a horrendous shop fire and lost everything. In ‘88 I putzed with Enduros and the Slinger Stingers and put my own shop together, going full-time in ‘89 in Figure 8’s and Stingers. I did that through ‘91, then mods from ‘91 to ‘94.

What do you like about Slinger Super Speedway?
It’s pretty much home. It’s the first place I came to race a car. It’s the first place I won a race. No matter where I went to race, I would always be back here. I’ve only missed seven races in 42 years: five were when Wayne switched to Saturday nights in 1983 and I had to work. I ended up getting off of work by quitting that job!

Is there anybody you need to thank from your racing days?
John Church, Bumper-to-Bumper, Jim Kannenberg, Mark Melchiori, Ralph Schneider and Schneider Motorsports. Those were the ones who were instrumental in keeping me going. My boss, Tom Nickerson at NVR Racing too, because when things got slim I got motors.

You are one of the members of the Slinger Speedway Focus Group, which was formed over the off-season to improve everyone’s experience at the track. Talk about that a little.
I was honored to be chosen. The Focus Group is the best thing that has happened here in a long time. As we are standing here talking, members of the Focus Group and other fans are out there painting fences and cleaning up! It’s a mix of fans and racers working for a good common cause. Everyone helps a little, but in the log run it helps a lot.

What was the “Kannenberg Connection”?
We had probably ten kids, all in their 20’s; Jim was a little bit older than us and owned a junk yard in Jackson. He was the first Figure 8 Champion and the first Slinger Stinger Champion, but he also gave a lot of people an opportunity to race. If you could get to the racetrack, he would have a car there for you. We’d come in with his truck hauling three cars and me hauling two more – it was like watching the circus come in! He’d keep the weekly winnings, but if you raced every week, he’d let you keep the point fund money. He encouraged a lot of people to race, and helped supply parts out of his junkyard. When I started, he told me to go out back and pick a car; I ended up with Jim Rogers’ Hobby Stock.

What is your real job?
I’ve worked for NVR Racing, an engine builder in Butler, for the past 25 years. I’ve been a mechanic, run the Dyno, tuned cars at the track, and assembled engines. I’ve pretty much done everything but run the office! At Slinger, Tyler Hromadka (#3 Late Model), Adam Bleskan (#11 Sportsman), Scott Shambeau (#88 Sportsman), and Ryan Lovald (#67 Figure 8) run our motors.

What is your favorite racing memory at Slinger?
The very first race I won, in the Figure 8’s in 1984. Back then, Wayne would come out and take a picture with you. Being just a kid, it was really cool to get a picture taken with the track owner!

Which Slinger driver (past or present) do you respect the most?
Hopefully without offending any of my customers…Mike Egan. I’ve known him since I was 15, before we raced. We used to go roller skating, then started racing at the same time. He started at Hales and I went there to watch him. I started at Slinger, and he came here to watch. 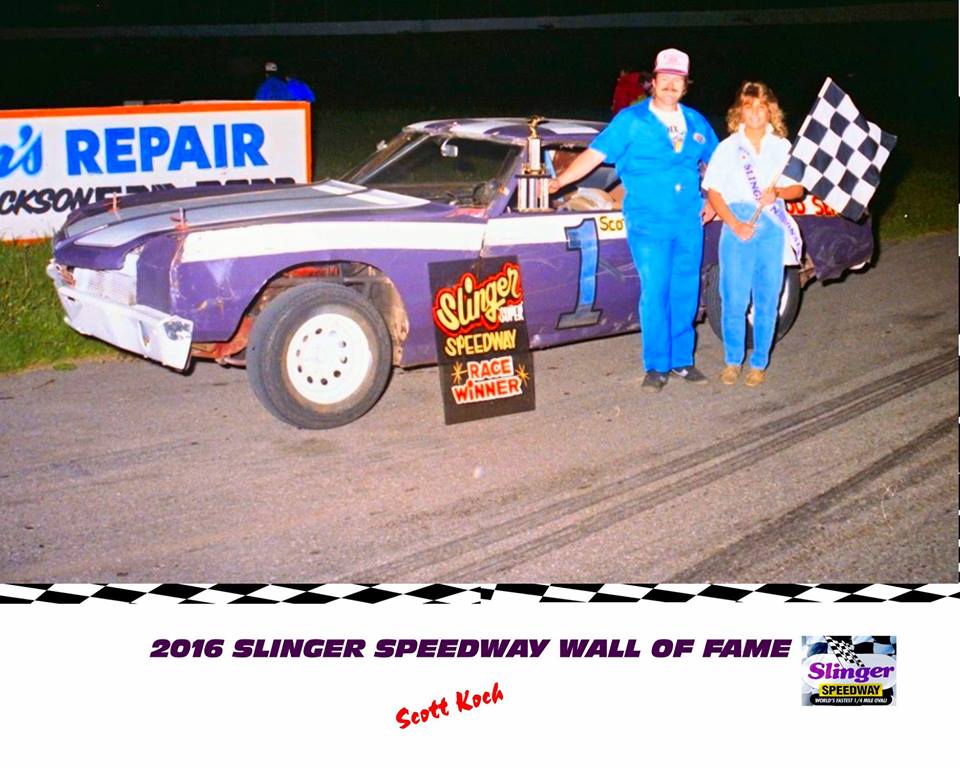