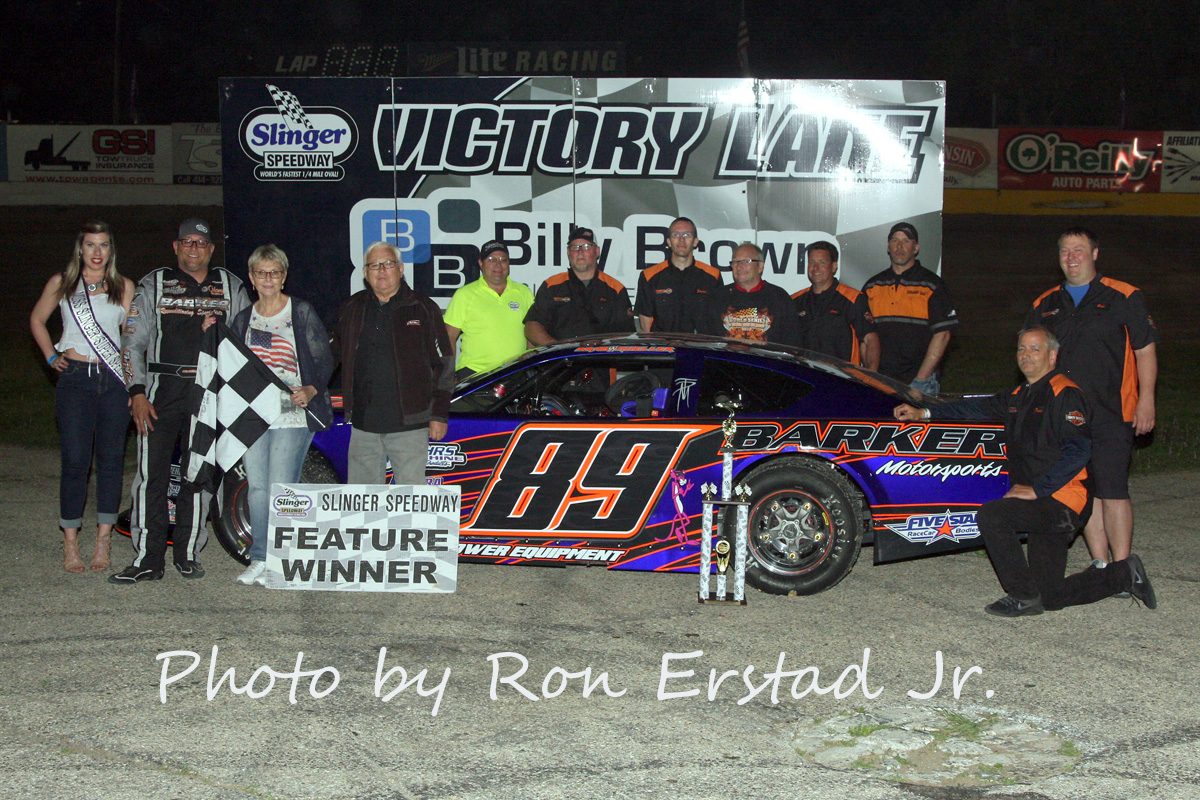 “I’m telling you, that there is a great race car,” Mueller proclaimed from victory lane after leading 65 of the 100 laps of the main event, “My guys never give up and we made some changes to it this week and I told them it should help it in qualifying but it might get free in the long haul and it was starting to get free during that really long green segment.”

“I didn’t want a caution,” Mueller continued, eluding the a late-race slowdown in the final 25 laps, “But I kind of needed it to cool the rubber down a little bit and it is what it is.”

Gary LaMonte and Grant Griesbach paced the field to the green flag and Griesbach launched to the lead from the outside of the front row with LaMonte settling in behind him while Nick Wagner, Mike Held, and Brad Mueller fought for third place. A quick sideways slide by Brad Keith out of turn four drew the first caution flag on lap four and as racing resumed Griesbach and LaMonte staged a side by side battle for the lead as Mueller began to work his way forward past Wagner and Held and into third. Alex Prunty also advanced toward the front as he moved into fourth place while Mueller tracked down Griesbach and LaMonte who continued to dispute the lead as they battled alongside each other. LaMonte finally prevailed from the inside lane and he brought Mueller along with him and into second as Griesbach fell into a battle with Prunty for third. The top two began to stretch ahead as Prunty and Griesbach raced together which allowed Rich Loch and Steve Apel to join the party creating a four car battle for third. Once again the high side proved to be unkind to Griesbach as Prunty, Loch, and Apel all were able to move on by as Mueller continued to stalk LaMonte out front. Mueller muscled his way into the lead on lap 34 as LaMonte’s car was sent up the racetrack, dropping him to seventh as Prunty, Apel, Loch, Ryan DeStefano, and Griesbach all were able to pass by. The top three stabilized as the best battle on the speedway was between Loch and DeStefano over fourth which continued until the caution flag waved on lap 46 as Dennis Prunty’s car went for a spin in turn four.

Mueller chose the high side for the restart and was able to clear Alex Prunty for the lead as the field went back under the green flag while Apel used the inside lane to pass Loch for third. Mueller began to pull away out front as Apel edged alongside Prunty to challenge for second and by the time they were finished swapping the runner-up spot, Mueller had gained a sizeable advantage. Mueller’s advantage was quickly erased however when fluid on the track as a result of mechanical issues on Gary LaMonte’s car brought out the caution flag on lap 70. Apel challenged Mueller on the restart but couldn’t complete the pass as Mueller maintained the top spot with both Apel and Alex Prunty in his tire tracks. Dennis Prunty had an issue on the right front of his car on lap 75 and when it smacked the turn three wall, the caution flag waved once again. This time as racing resumed, Apel pressed harder in his bid for the lead and he was able to keep alongside Mueller using the bottom lane as Griesbach charged around Alex Prunty for third. Apel’s inside lane bid nearly came to an end a lap later when the back end of his car got out from under him entering turn one and by the time he drove through the miscue, Griesbach got around him for second as Mueller drove off with the lead. Mueller would not be challenged from there and he drove to the victory while Apel was able to retake second and hold off Griesbach at the finish. Alex Prunty finished fourth and Brad Keith rebounded from his earlier troubles nicely to finish fifth. Mike Held completed a strong run to finish sixth ahead of R.J. Braun and Rich Loch. Tim Lampman and Bobby Kendall completed the top ten finishers.
R.J. Braun won the 30-lap super late model semi-feature over Jordan DeVoy and Josh Wallace. David McCardle finished fourth ahead of Josh Nelms in fifth. Gary LaMonte won the super late model fast dash and Brad Mueller toured the speedway in 11.291 seconds to take top honors in qualifying.

Shaun Scheel paced the opening 19 laps before Stern took command on lap 20. Stern maintained the top spot throughout numerous caution periods as Nottestad methodically worked his way toward the front. Nottestad was up to second place as racing resumed from the seventh and final caution flag of the event and he kept Stern in his sights as the laps wound down. With four laps to go, Nottestad made his move and completed the pass for the lead, never looking back as he drove to the victory. Stern finished second followed by Shaun Scheel, Stephen Scheel, and Jerry Mueller in third through fifth place respectively.

Tom Berens and Jacob Nottestad each won a late model heat race and Jack Stern set the pace in qualifying with a blistering 11.994 second lap.

Brady Held scored a convincing win in the 25-lap Slinger Bee feature over Carl Benn and Matt Urban while Ronald Osborne and Garrett Konrath finished fourth and fifth respectively. Al Strobel and Matt Urban took home heat race victories and Carl Benn was the fastest qualifier as he turned in a lap at 15.271 seconds.

Baiden Heskett charged to the win in the 25-lap Legends feature, besting Jake Tretow and Austin Jahr in the process. Aaron Moyer finished fourth and Tristan Swanson took the checkered flag in fifth. Legends heat race wins were scored by Frank Beutel and Tristan Swanson while Aaron Moyer set a new track record in qualifying with a 13.200 second lap.

Kaleb Bradley was the winner of the 25-lap Bandolero feature over Alex Hartwig and Ayrton Brockhouse. Jacob Bradley and Karter Stark rounded out the top five finishers. Cohen Henze and Mason Surgener each won a Bandolero heat race and Alex Hartwig paced qualifying with a record setting lap of 14.362 seconds.

The Team Cruiser division made its return to the Slinger high-banks and the Super X Racing team of Jacob and Ken Schraufnagel won the event over Team Fogle’s Mark Fogle Sr. and Mark Fogle Jr. Al Roberts bested Dave Behling to win the Bar Car race and Russ Lorbiecki closed out the night with a victory in a wild Figure 8 event. 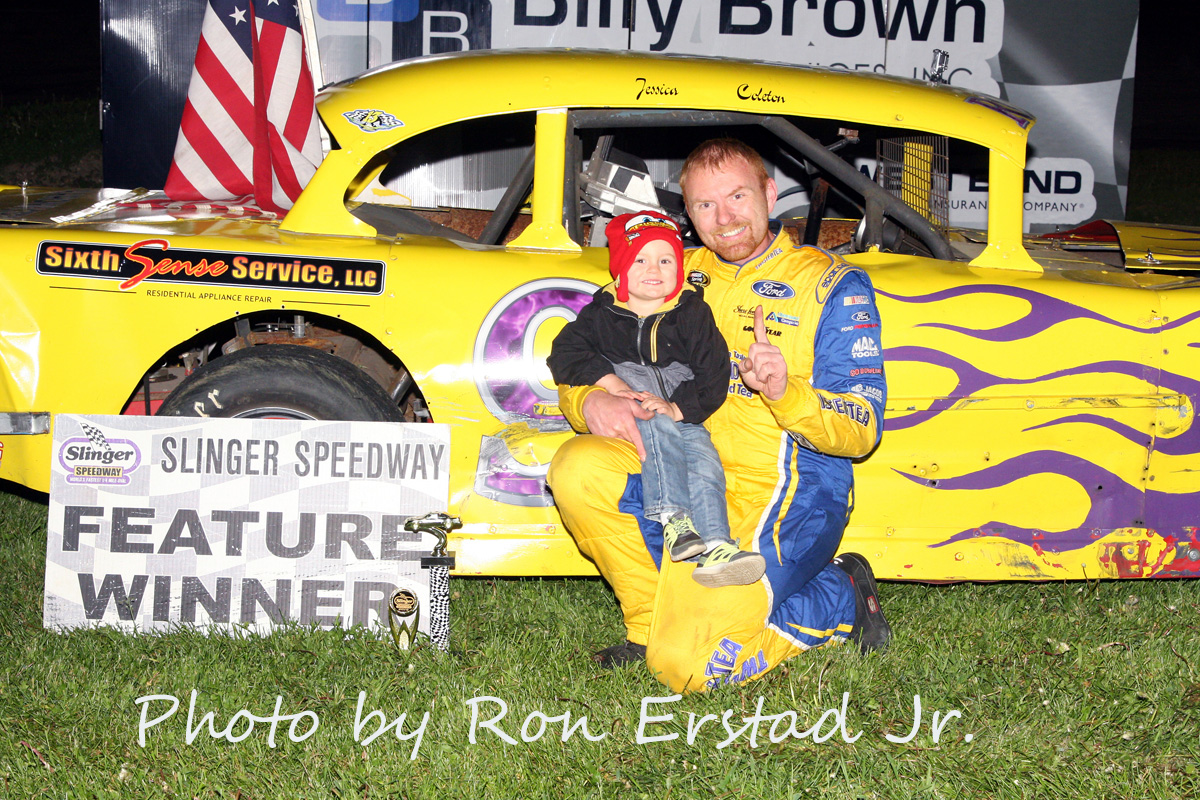 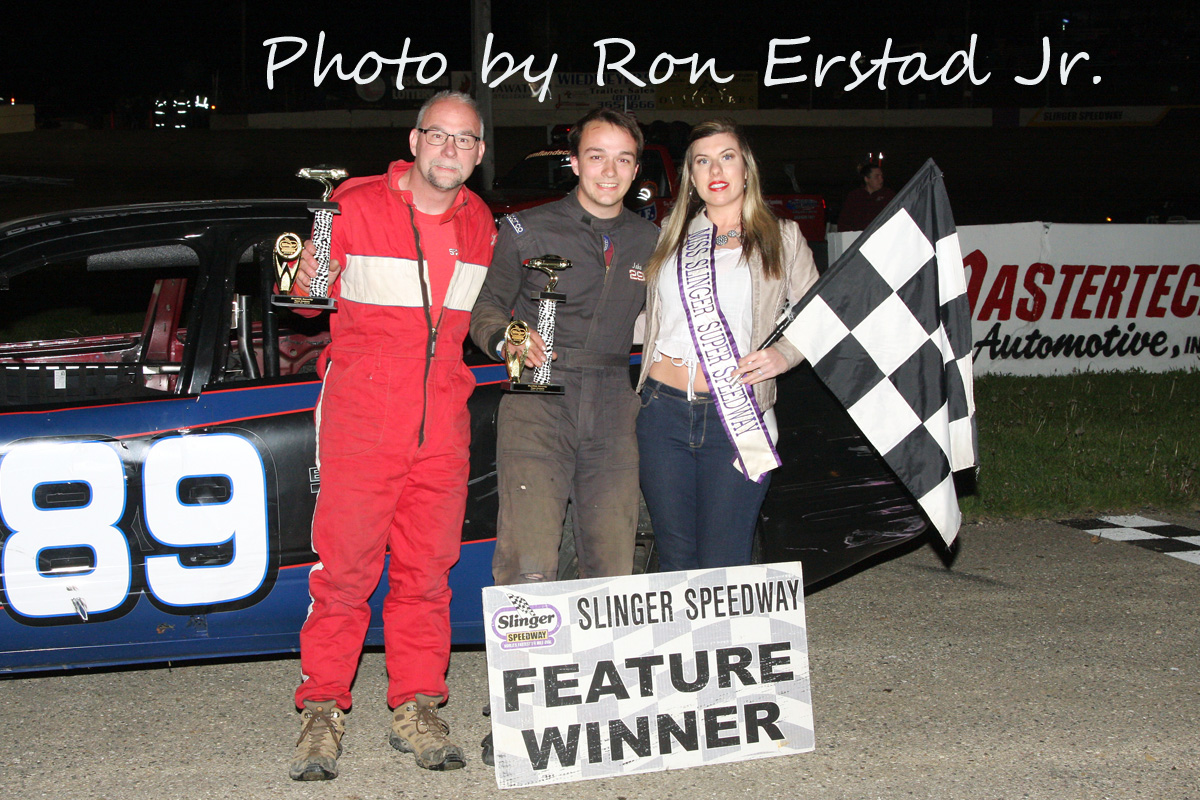 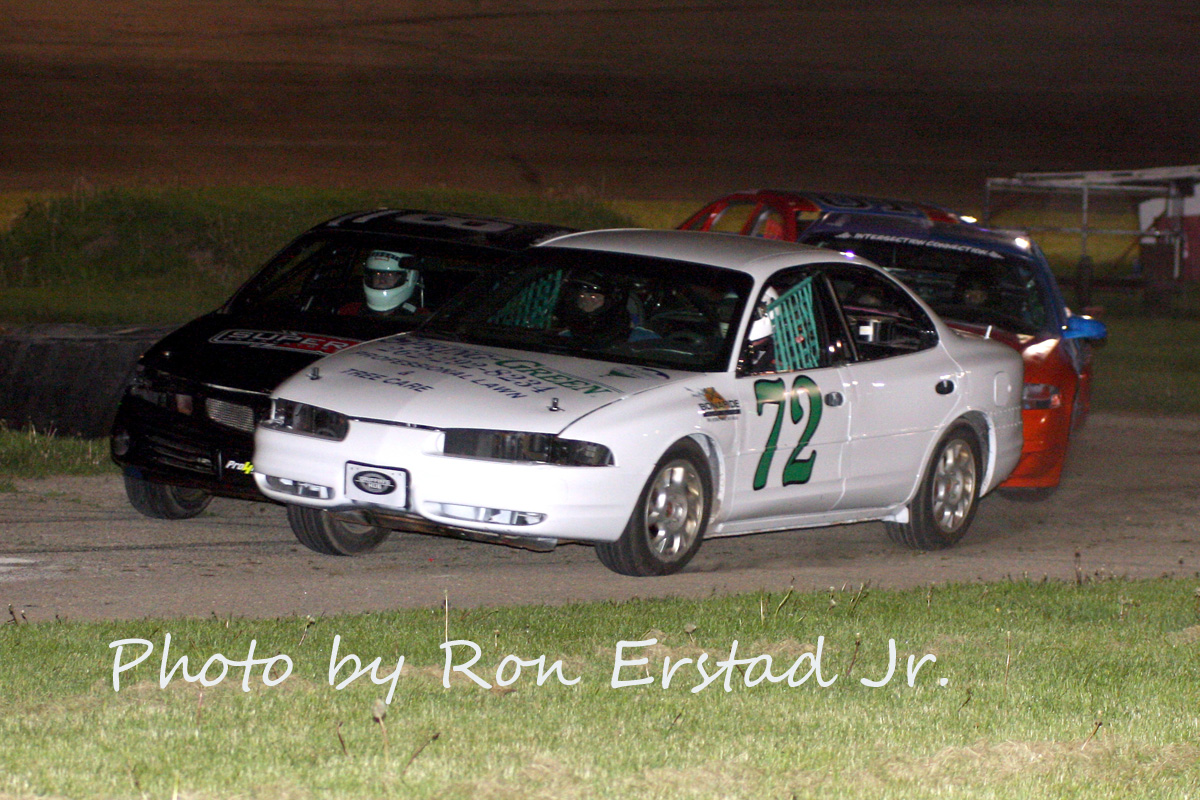 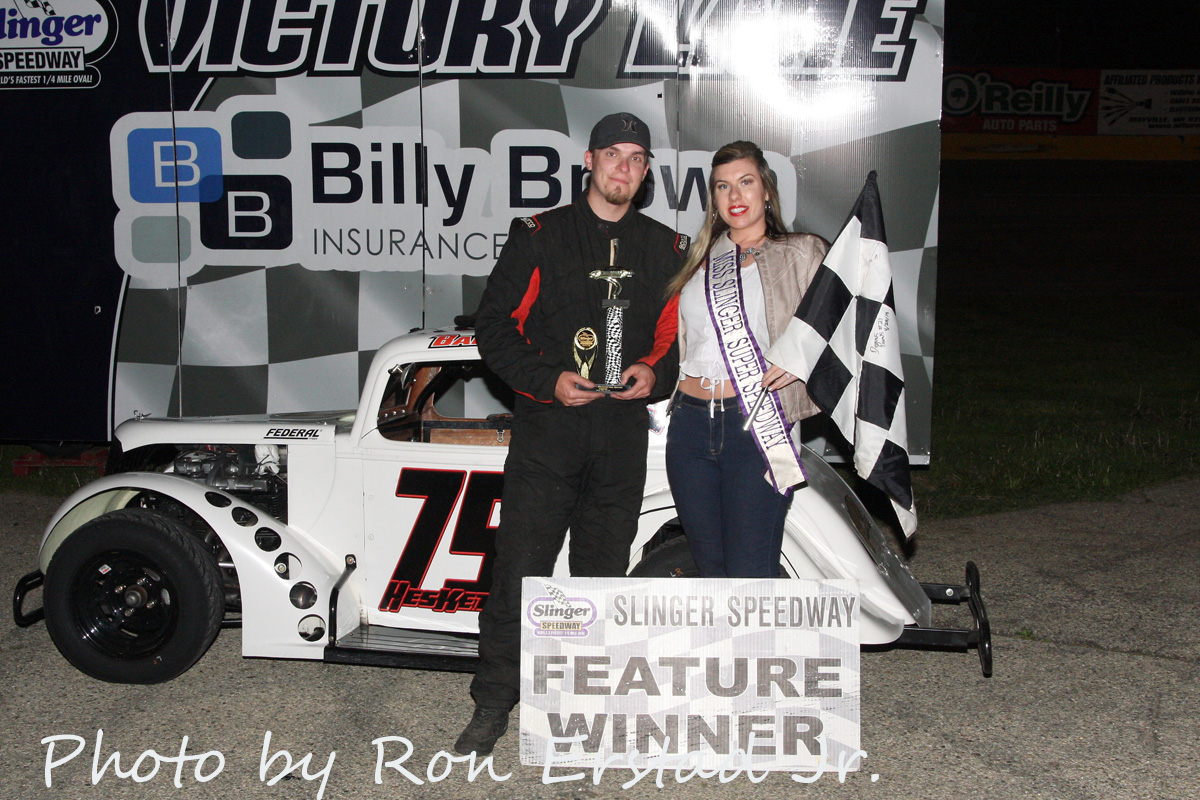 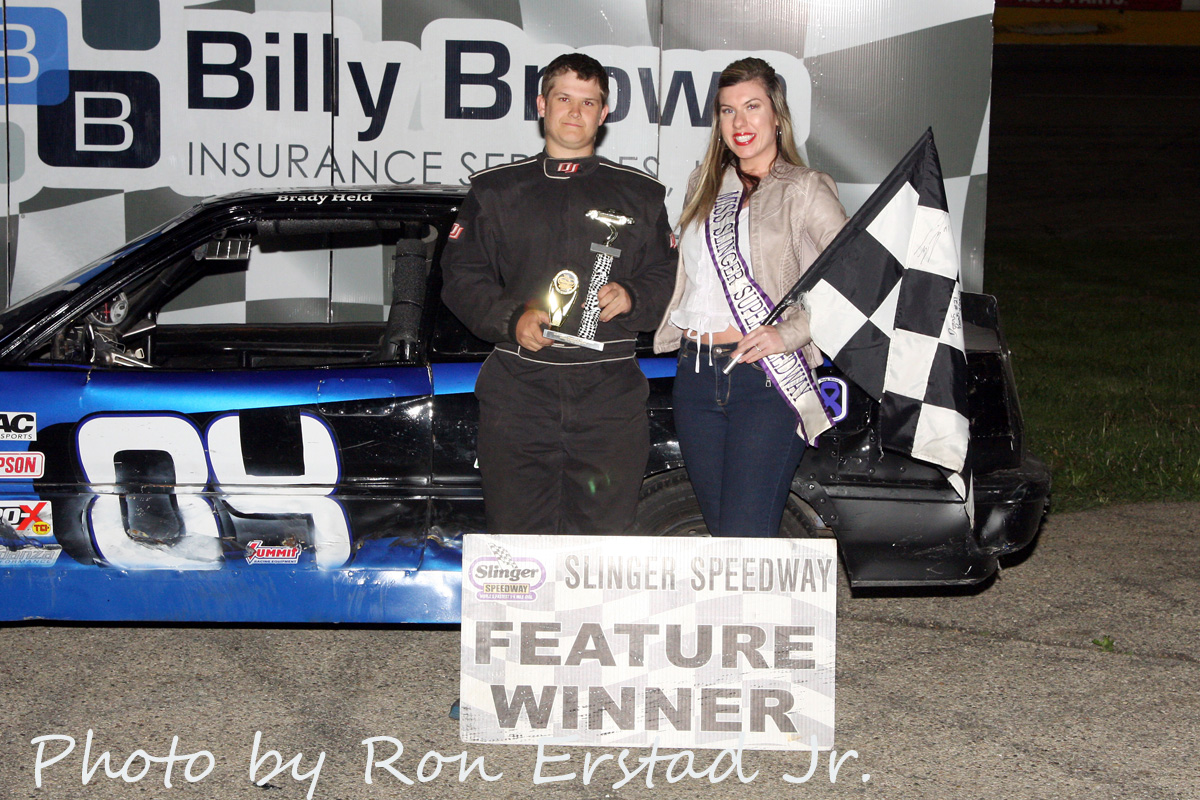 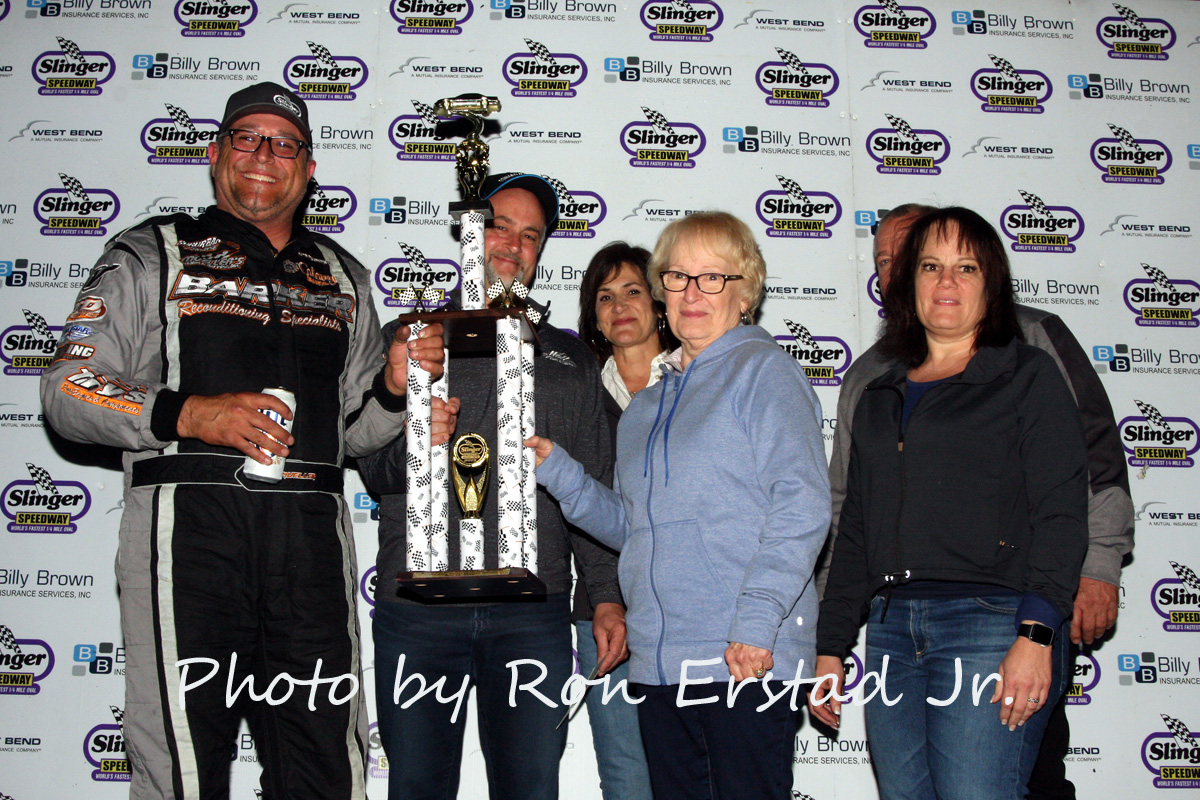 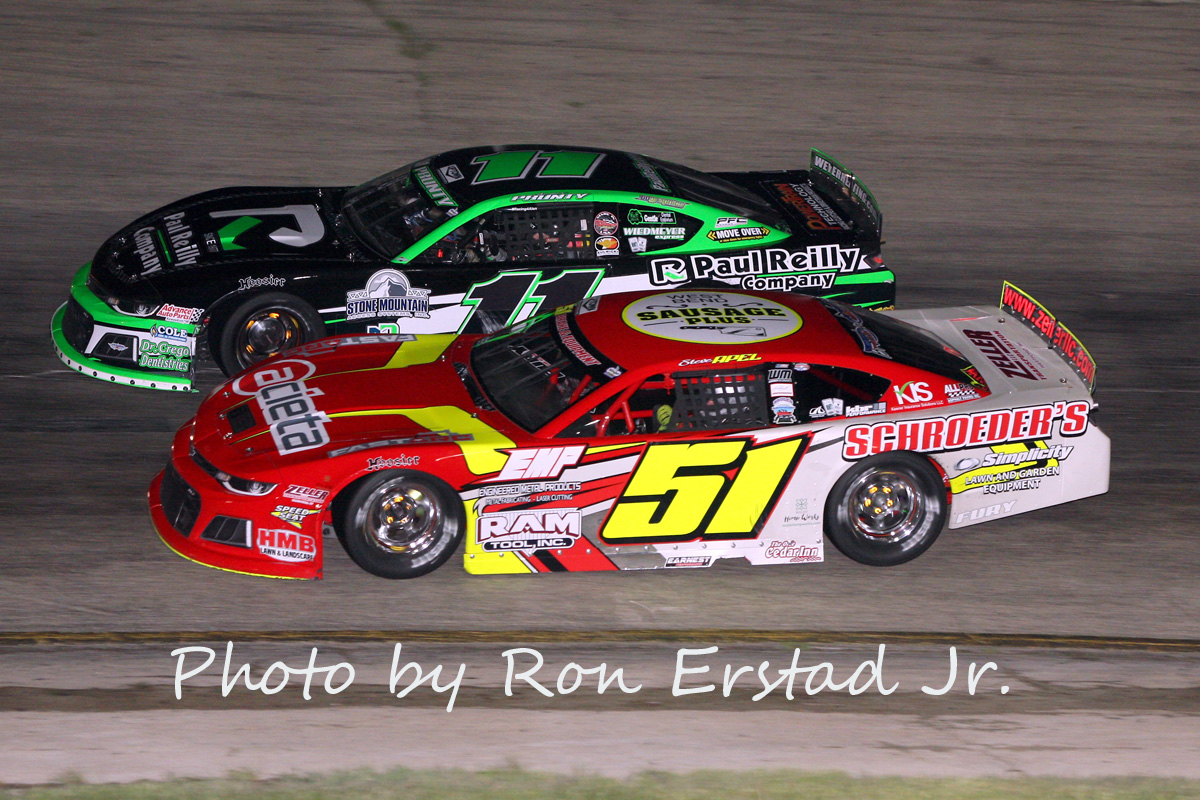 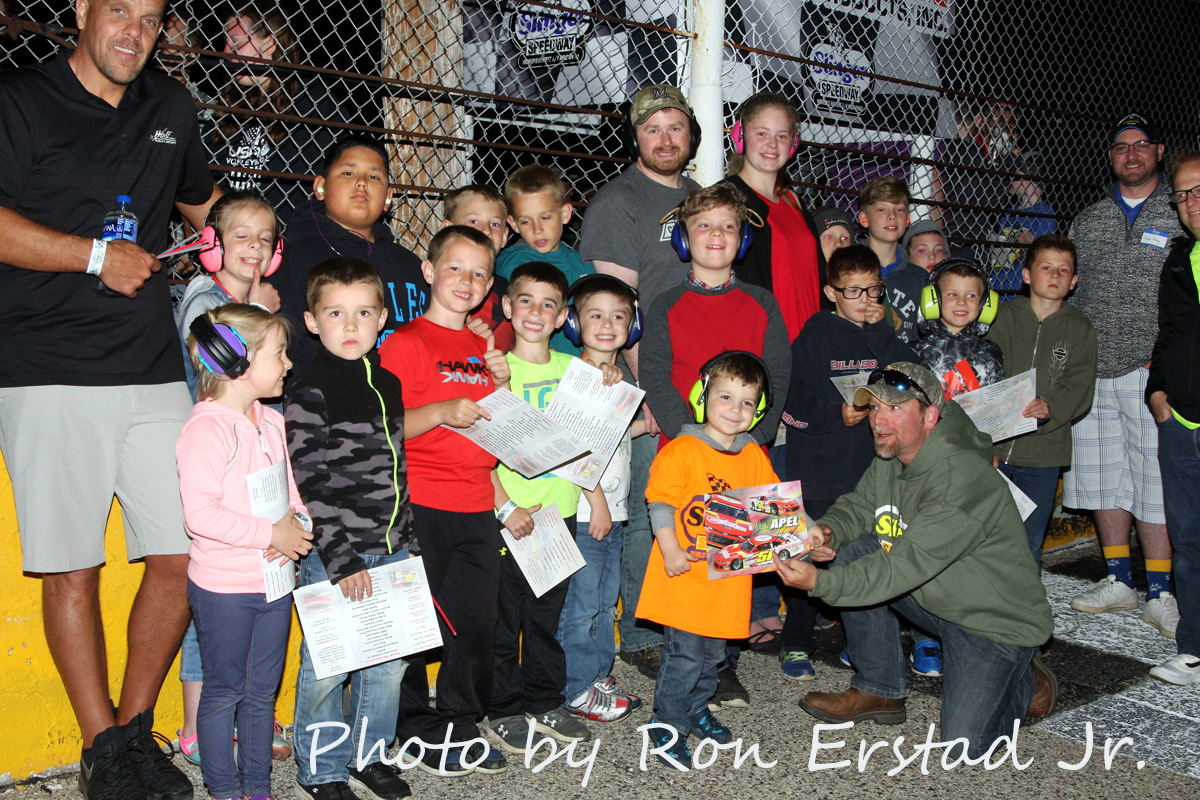 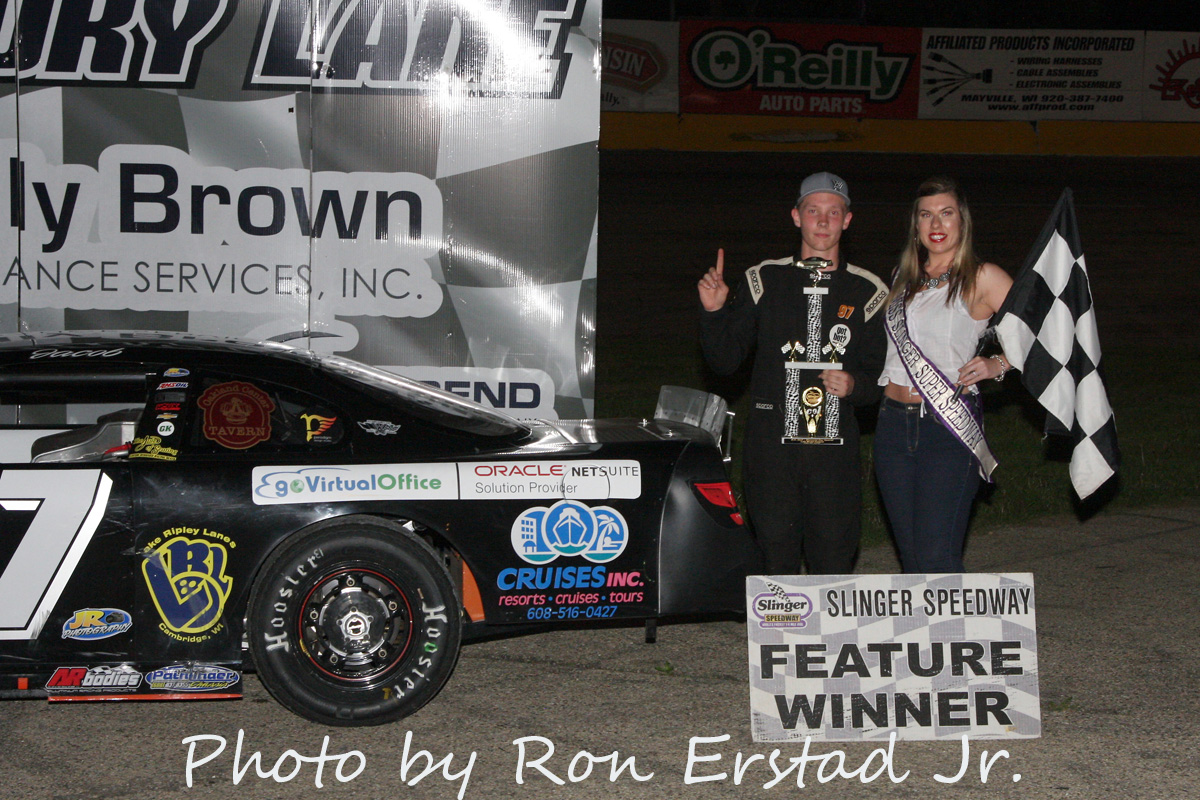 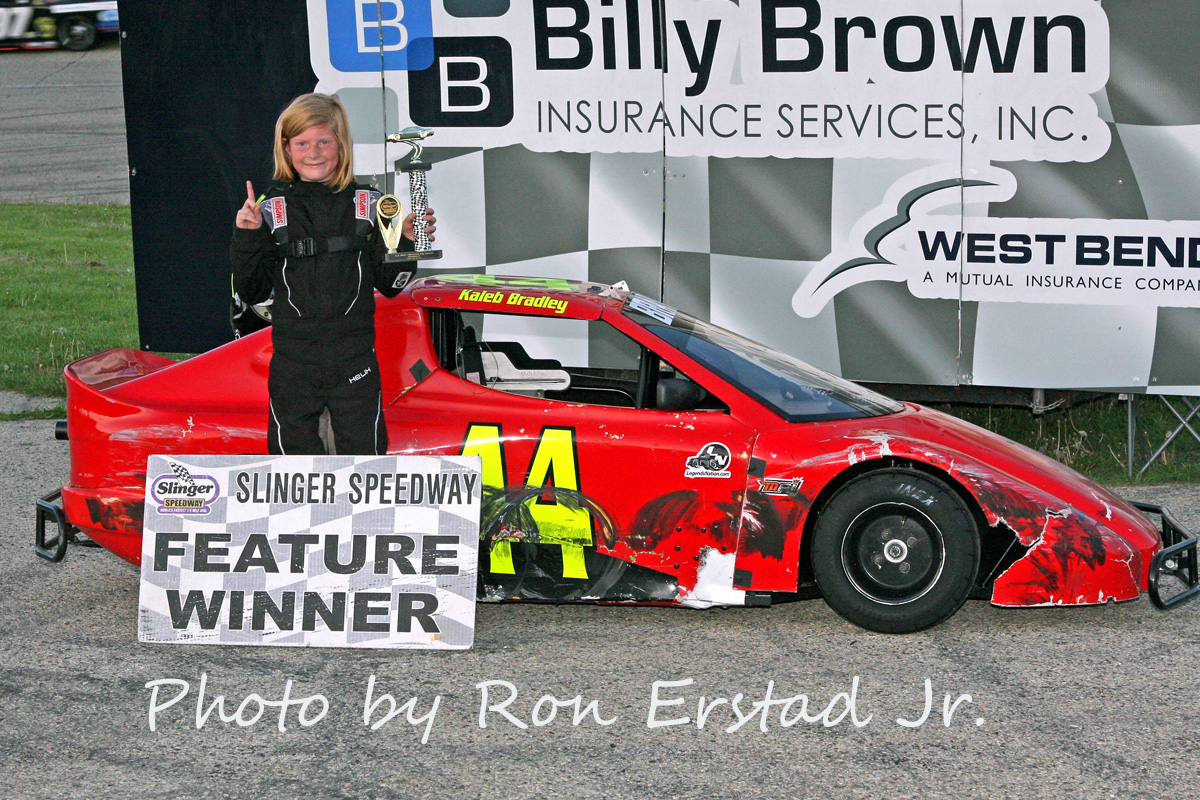 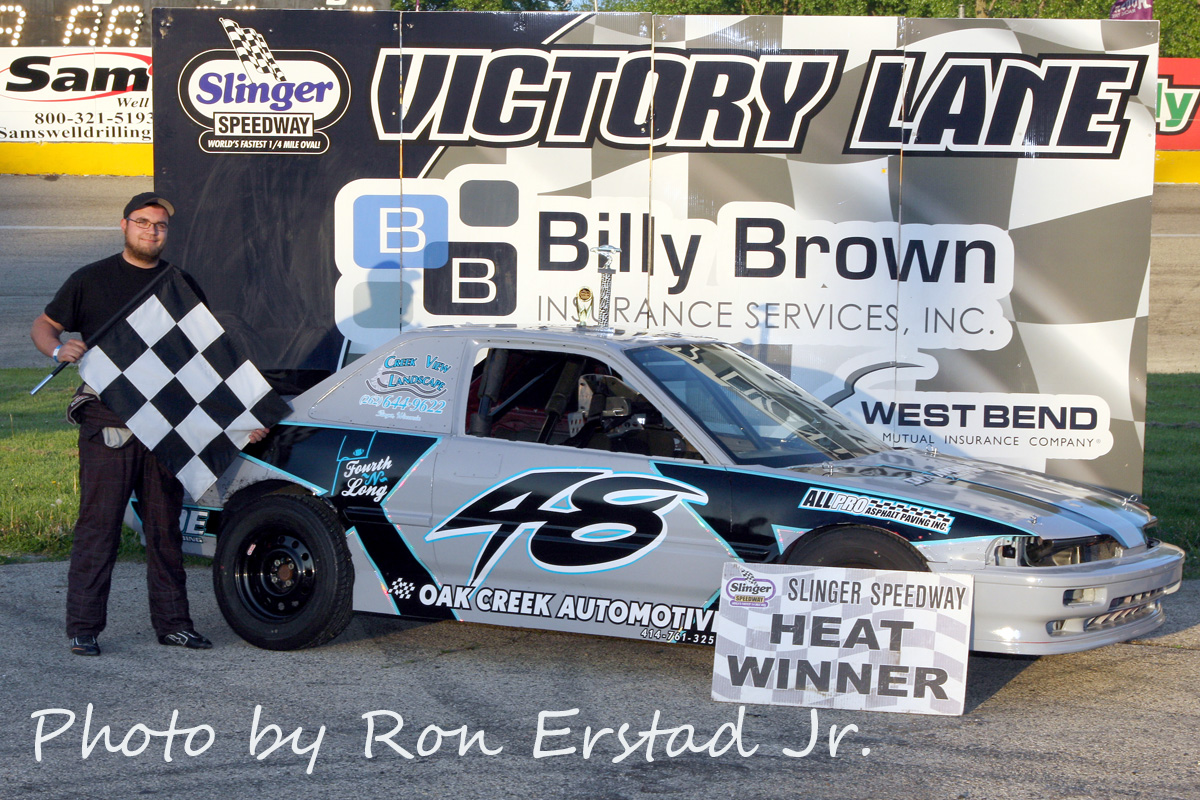 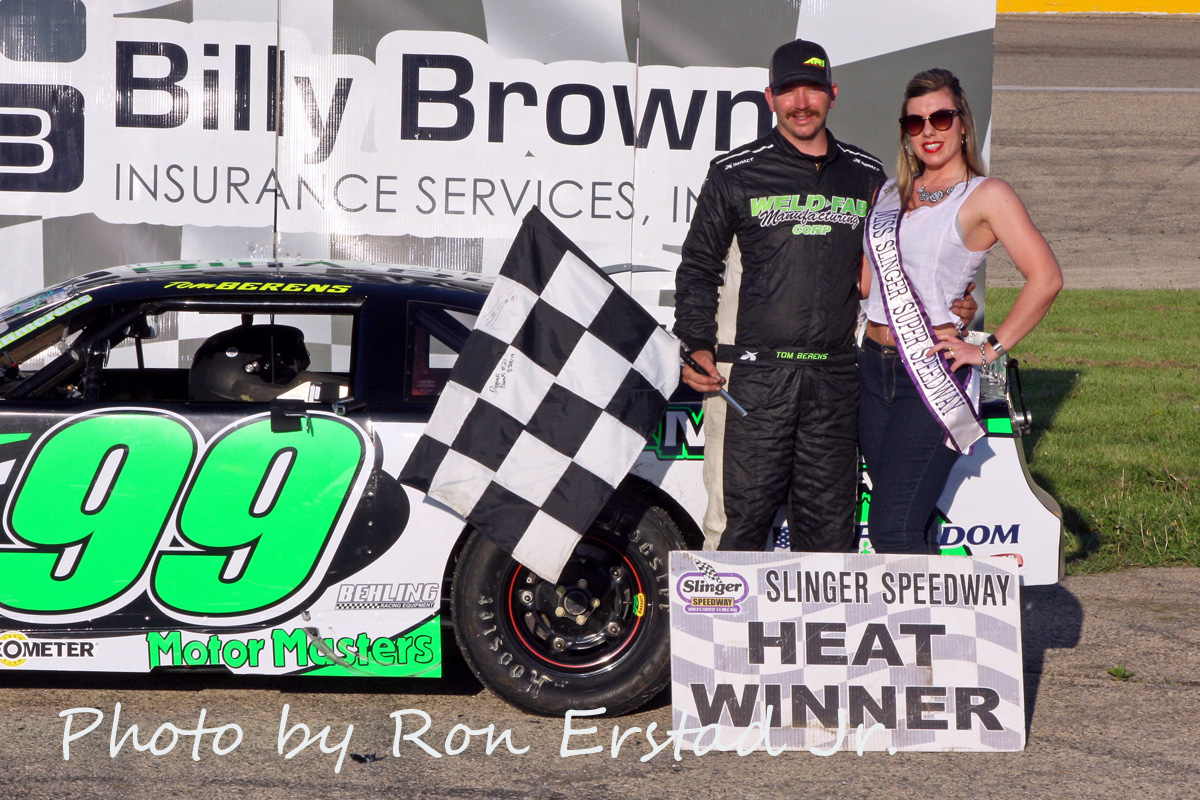 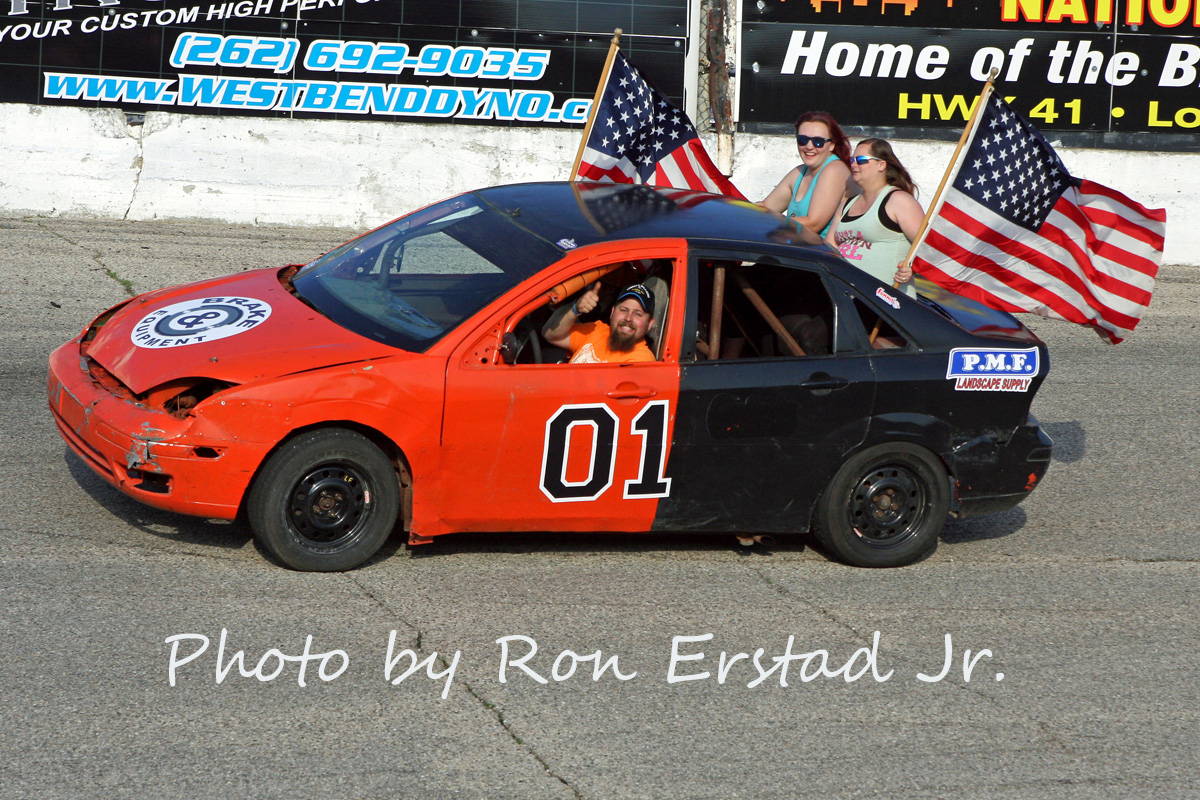 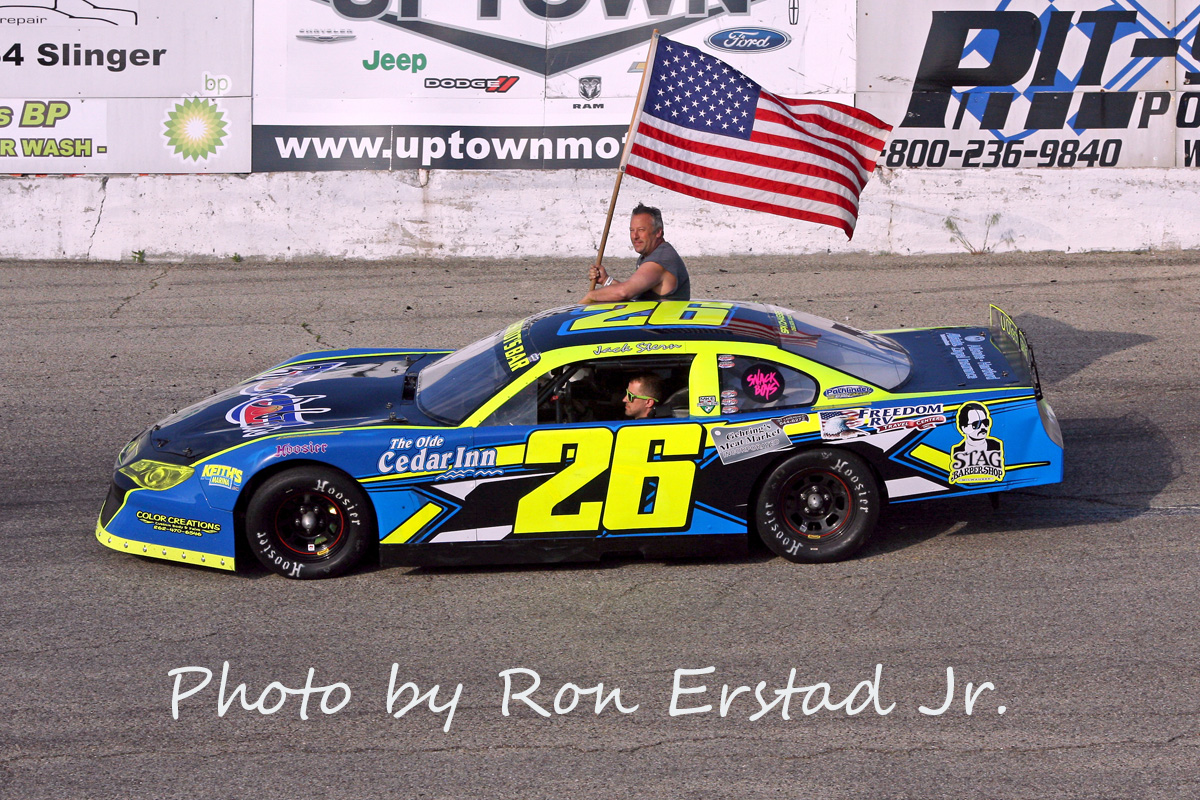 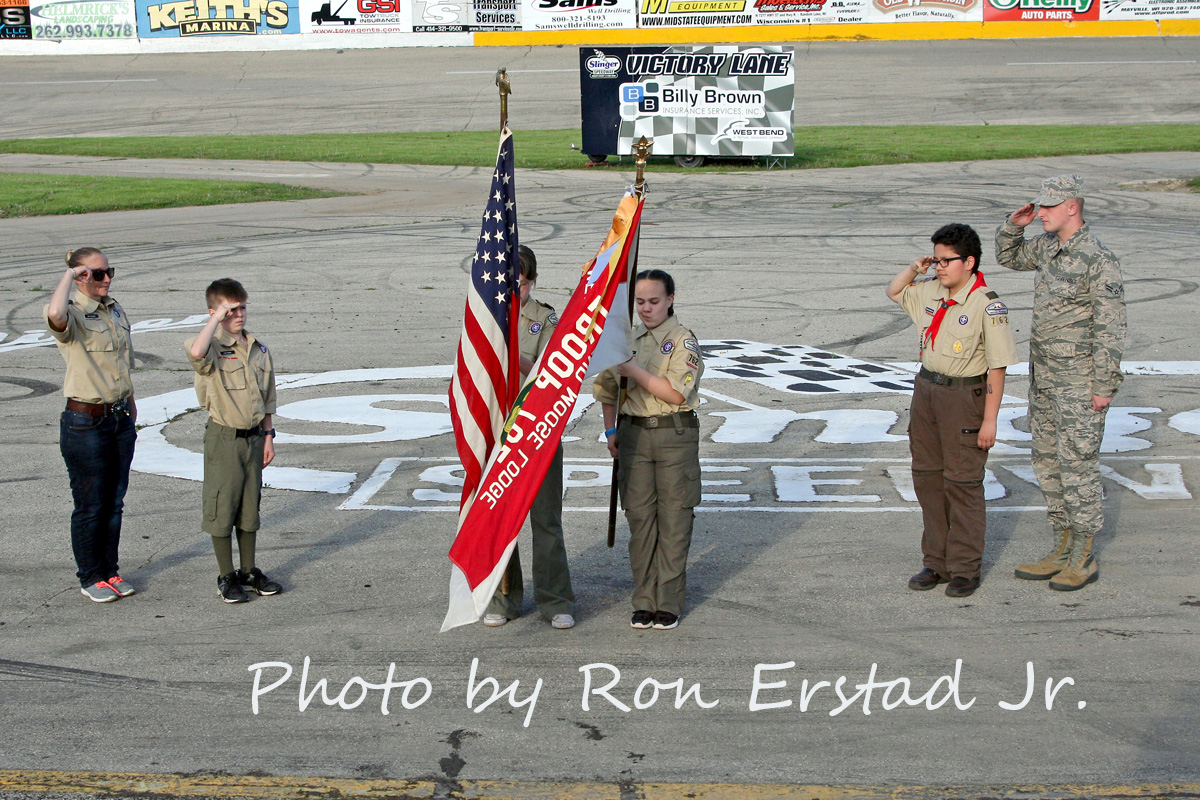