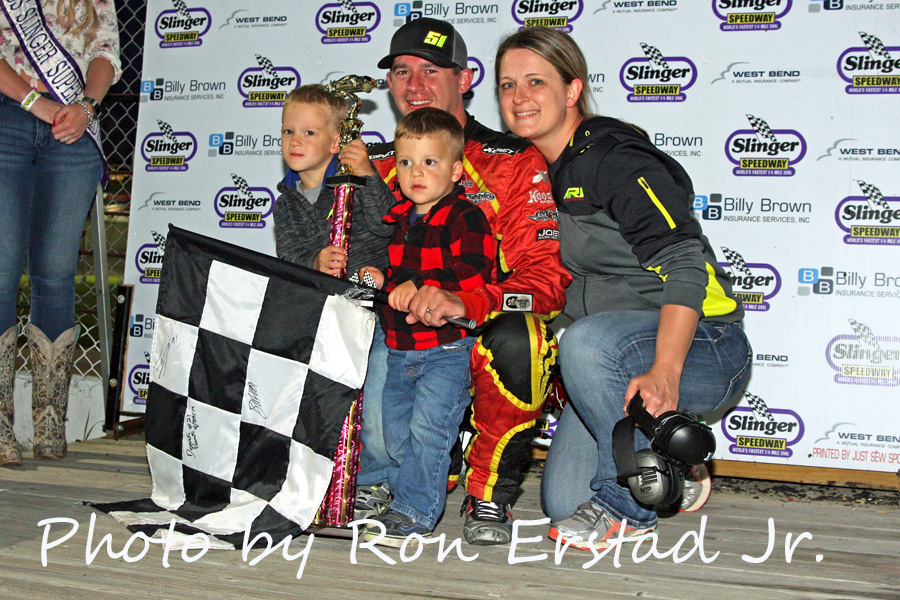 By Dan Margetta
Slinger, Wis., June 9— After experiencing mechanical problems with his own car last week, Steve Apel hopped aboard the #12 machine normally piloted by Brad Kassow, and drove to his first victory of the season in the Race Against Cancer 75-lap super late model feature Sunday night at the Slinger Super Speedway.

“After last week, we weren’t sure what we were going to do,” Apel explained from victory lane, “This is one way to top it off and I have to thank Kelly Bires and Brad Kossow for letting me drive this car.”

“We worked on it all night Friday and then worked all day testing it,” Apel continued, “And that thing was a rocket ship. I couldn’t be more grateful for the opportunity to drive this car and it was an awesome experience.”

Bobby Kendall charged to the lead at the start of the race as the inside row of cars quickly advanced forward bringing Chris Blawat into second ahead of Steve Apel and Nick Wagner. Blawat worked the inside on lap two and moved alongside Kendall off the second corner before snaring the lead off turn four on lap three. Apel and Wagner followed Blawat through on the inside for second and third place while behind them Alex Prunty and Brad Keith traded paint just in front of Brad Mueller. As Blawat edged ahead, Wagner dove to the inside of Apel for second while Dennis Prunty moved into fourth place ahead of the continuing scuffle between Alex Prunty and Brad Keith. The hard racing between the two culminated in the first caution flag on lap 11 when Alex Prunty’s car spun off the second turn and they appeared to have a brief on track discussion before falling to the rear of the field for the restart. Blawat chose the outside lane and Wagner lined up alongside and the two raced side by side for the lead as racing resumed. A slight bobble near the start-finish line on lap 12 caused Blawat’s left front tire to ramp over Wagner’s right rear tire which sent Blawat’s car hard into the turn one concrete as it rode the wall all the way to turn two before coming to a rest. Blawat was uninjured in the incident but his car was severely damaged as the red flag appeared while track clean-up was underway.

Apel used the outside groove to take the lead as the race was restarted and Rich Loch raced into second also on the outside just ahead of Wagner. Behind the top three Dennis Prunty tried to squeeze ahead of Grant Griesbach over fourth place and when he didn’t quite find all the room needed, the chain reaction effect that followed sent Brad Mueller sailing through the infield grass heading into turn one. All drivers maintained control and the race remained under green as Mueller lost several positions. The top three stabilized a bit as Dennis Prunty eventually made the pass on Griesbach to take over fourth place by lap 25. Nick Wagner’s car slowed on lap 27 to draw the caution flag and as the field tried to avoid him, Brad Mueller made a second trip through the infield grass but was able to regain control and keep going. Apel maintained the lead as the green flag waved and Rich Loch battled valiantly on the outside, racing side by side for several laps before eventually losing ground which allowed Dennis Prunty, Mike Held, and Alex Prunty to race by. A tangle between R.J. Braun and Brad Keith in turn two drew another caution flag on lap 39 with Apel leading over Dennis Prunty, Held, and Alex Prunty. Apel once again retained the lead on the restart over Dennis Prunty and Alex Prunty while Held raced with Loch and Griesbach over fourth. As the lead cars settled down, Brad Mueller began to march forward and he joined the battle for the top five by lap 50. As Apel remained out front, Alex Prunty used the inside lane to take over second place from Dennis Prunty as Mueller continued his charge by racing into fifth place. Mueller then raced Mike Held for several laps over fourth and at one point, his car kicked loose off turn two which caused Held’s car to twitch and while neither lost control, Mueller gained the position as Held fell back several spots.

Apel could not be caught in the final laps and he captured his first feature victory of the season over Alex Prunty and Dennis Prunty who finished second and third respectively. Brad Mueller’s adventurous race ended with a fourth place finish and Rich Loch was fifth. Grant Griesbach finished sixth ahead of Josh Wallace and Conrad Morgan. Bobby Kendall and Tim Lampman rounded out the top ten.

Mike Held won the super late model fast dash and Brad Keith was the fastest qualifier after turning in a lap of 11.332 seconds.

Jesse Bernhagen scored his first feature win of the season in the 40-lap late model main event after holding off Jack Stern in a green-white-checkered finish.

Cole Thomas paced the first 16 laps before Jack Stern took command of the event while Jesse Bernhagen ran a close third. Bernhagen was able to get around Stern two laps later to take the lead. Bernhagen maintained the top spot through several caution periods with the final one setting up a green-white-checkered shootout finish. Bernhagen was up to the task and he held off Stern to score the victory while Stern finished a strong second. Brian Holtz finished third while Steven Schulz and Jakob Hassler completed the top five. Ryan Gutknecht finished sixth while Tyler Hromadka was seventh and Ryan Craine took the checkered flag in eighth. Zach Prunty and Cole Thomas were ninth and tenth respectively.

Jerry Eckhardt and Jesse Bernhagen each won a late model heat race and Jacob Nottestad was the fastest qualifier with a lap of 12.092 seconds.
Jimmie Evans held off a hard charging Jay Kalbus to win the 30-lap sportsman main event. Jacob Schraufnagel finished third ahead of Paul Wagner and Bobby Gutknecht in fourth and fifth respectively. Jimmy Evans and Jacob Schraufnagel also each won a sportsman heat race and Jay Kalbus set fast time at 12.652 seconds. 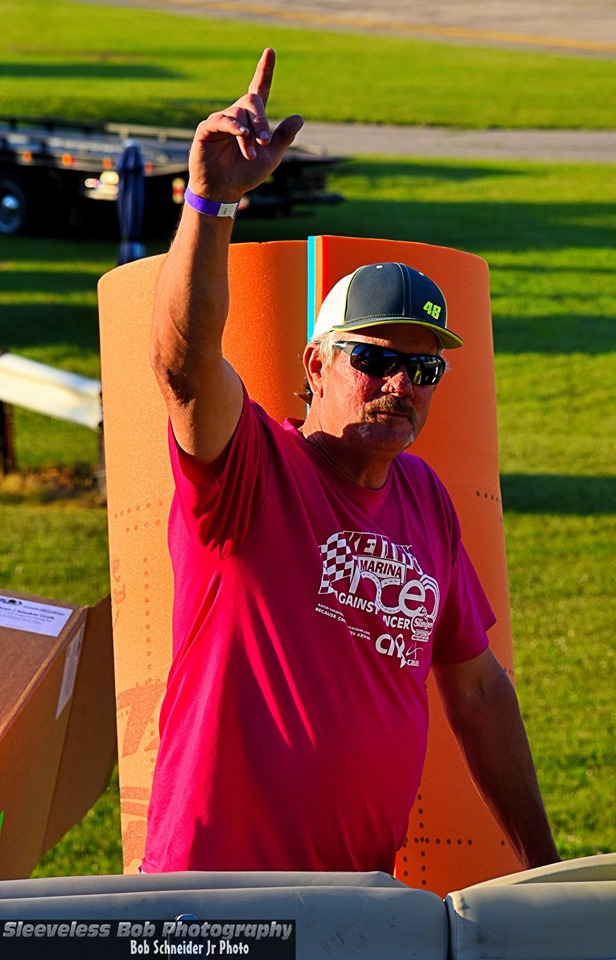 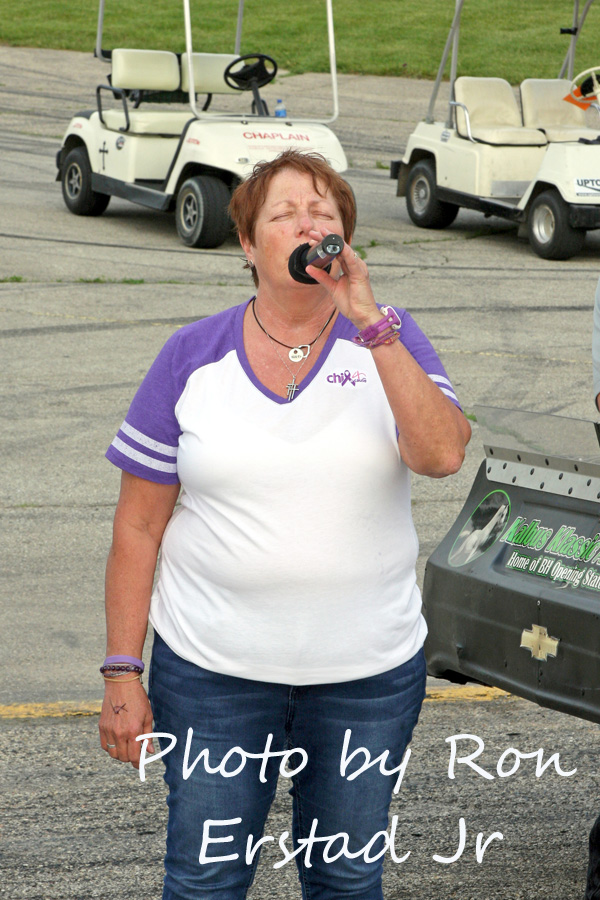 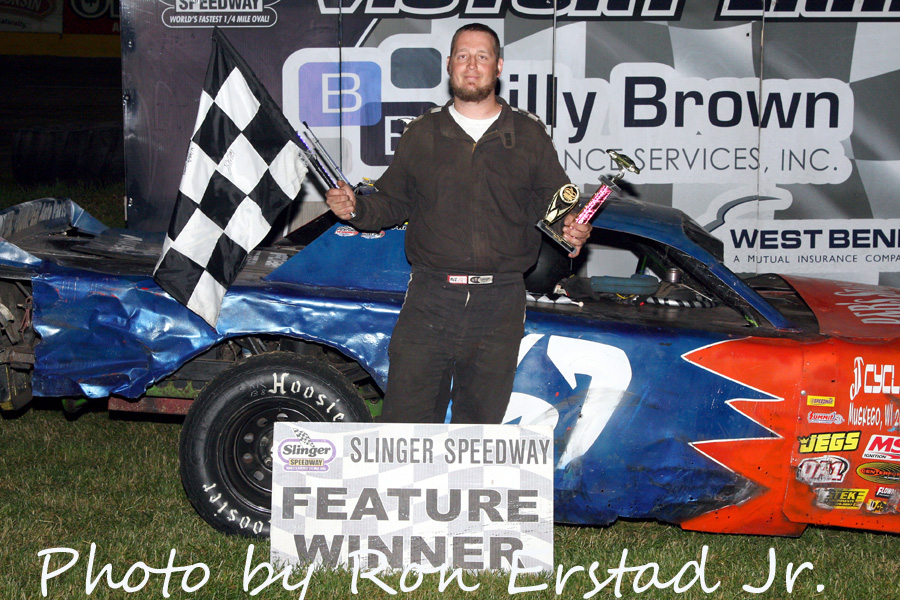 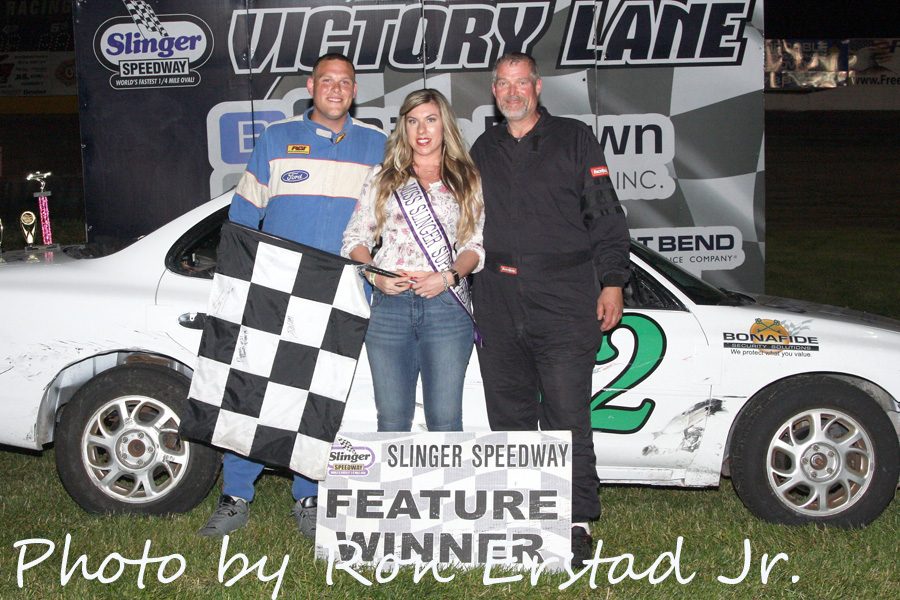 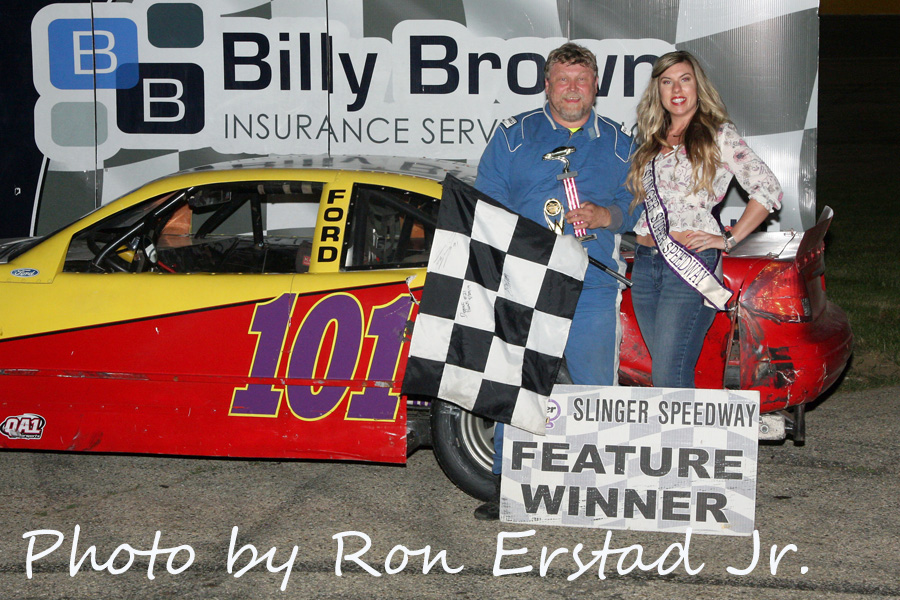 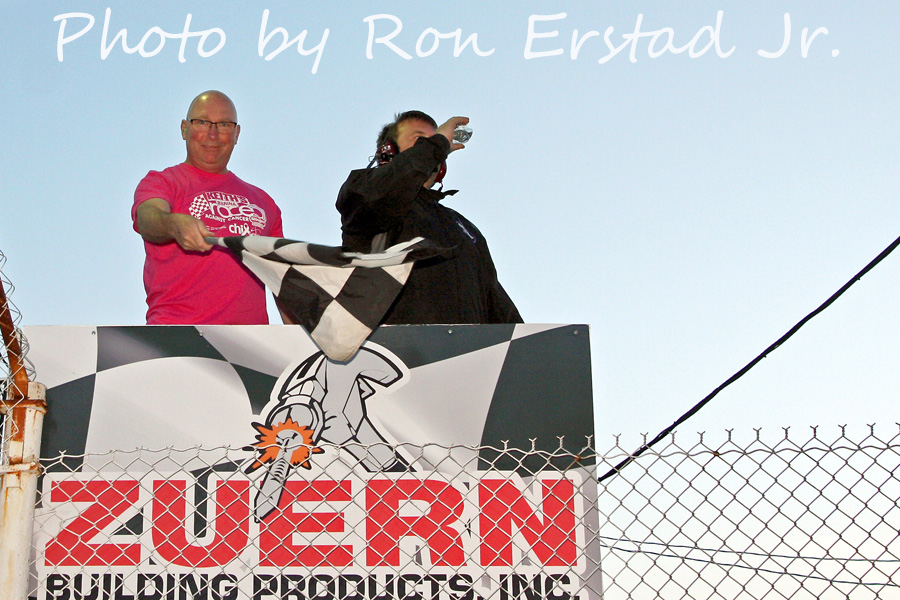 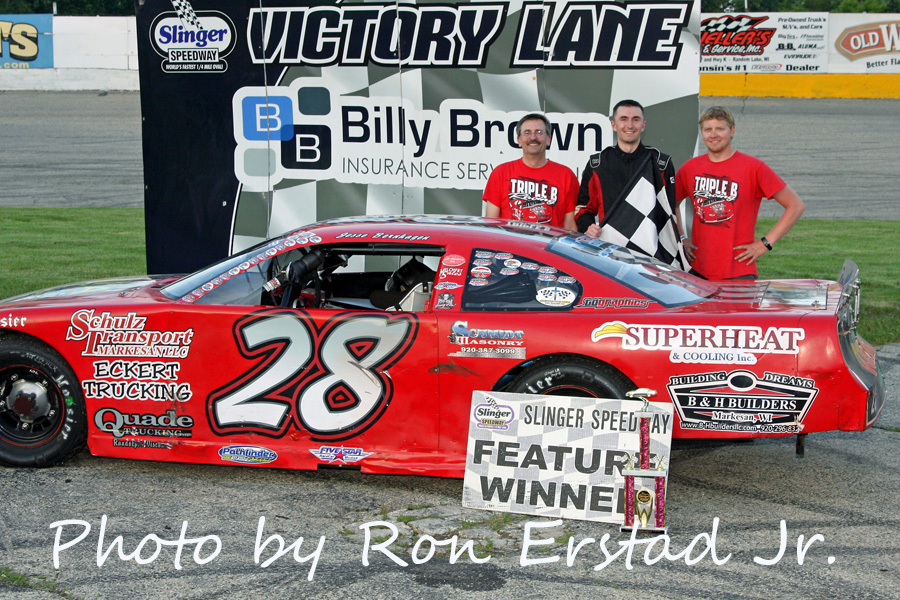 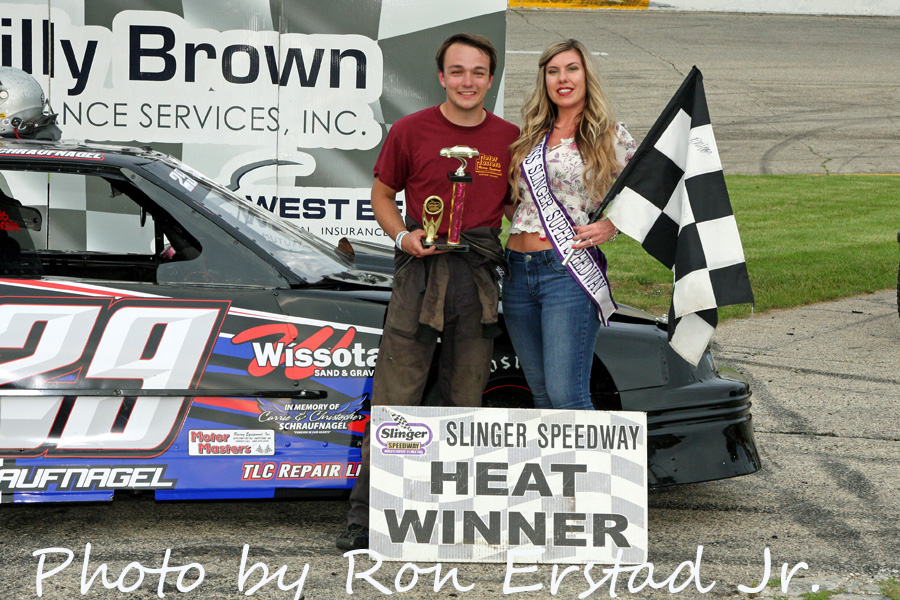 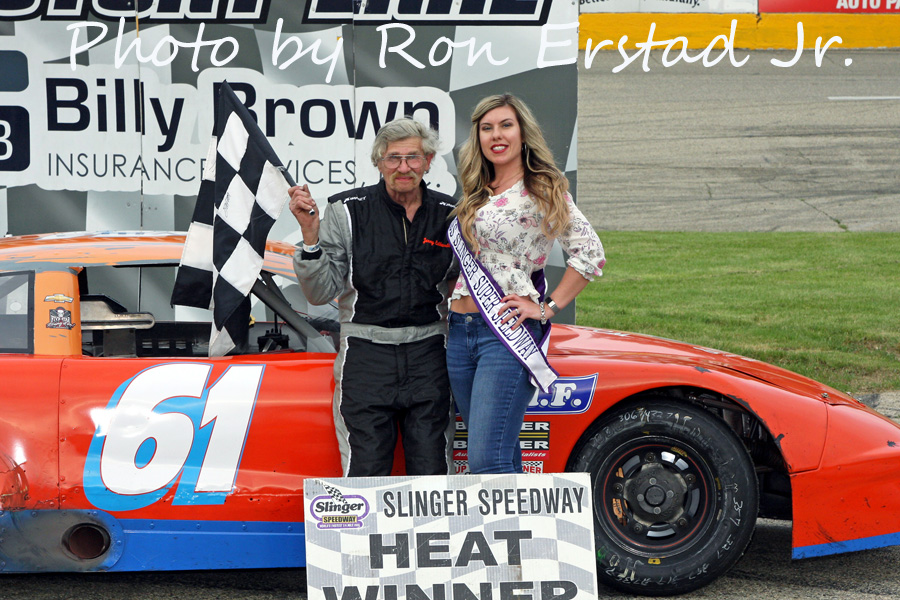 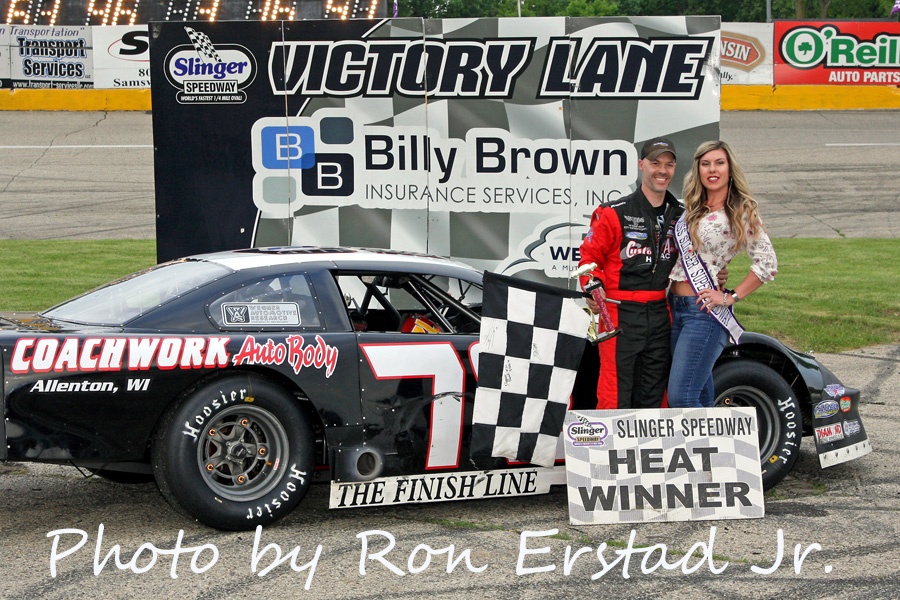 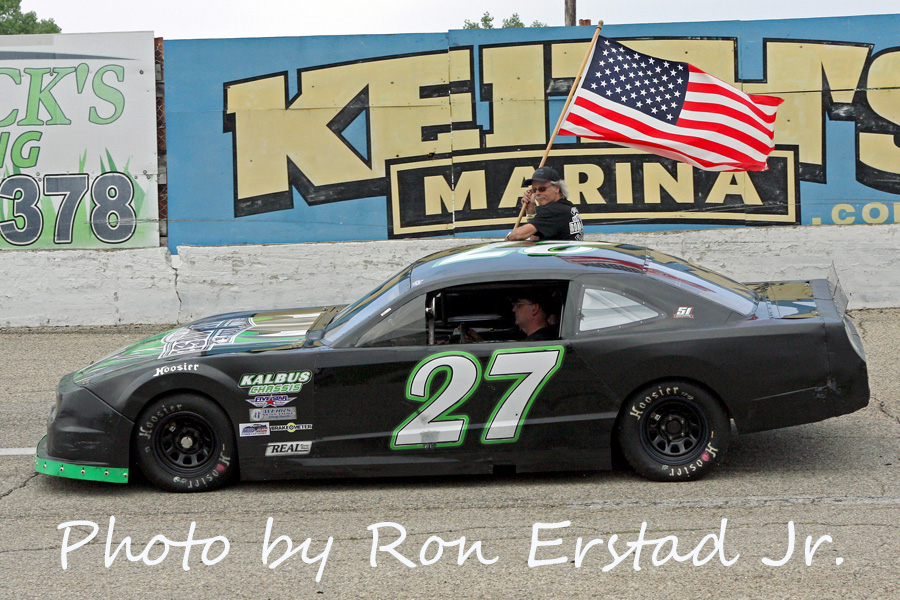 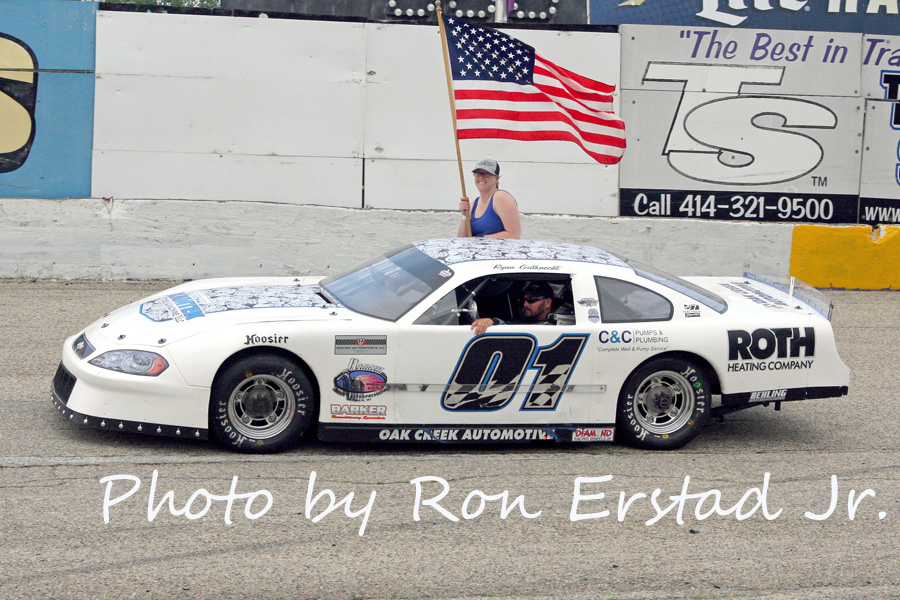 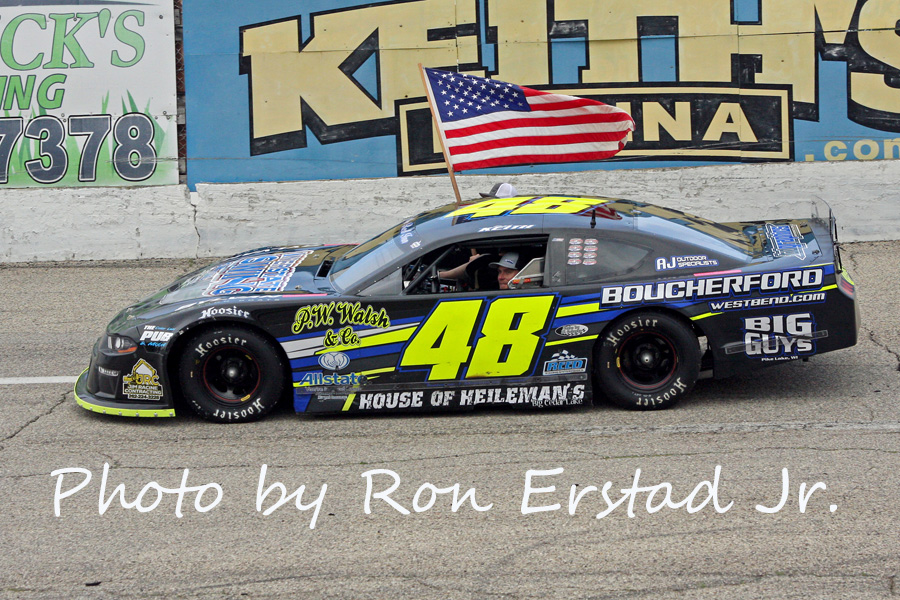 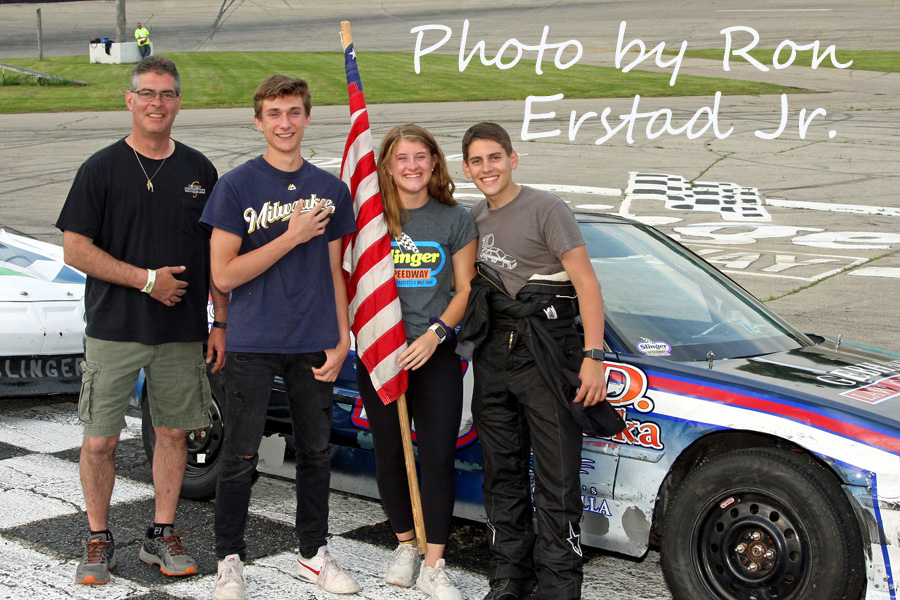 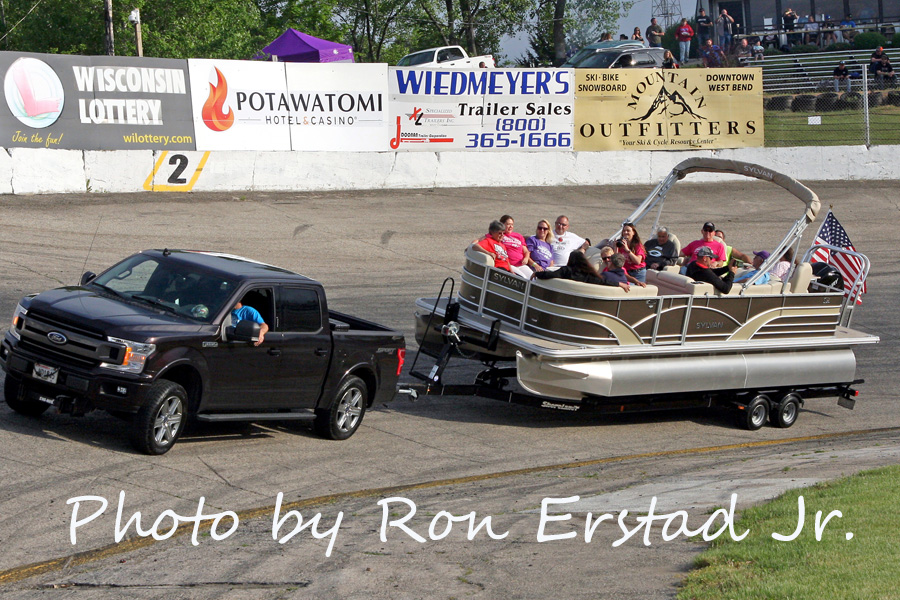 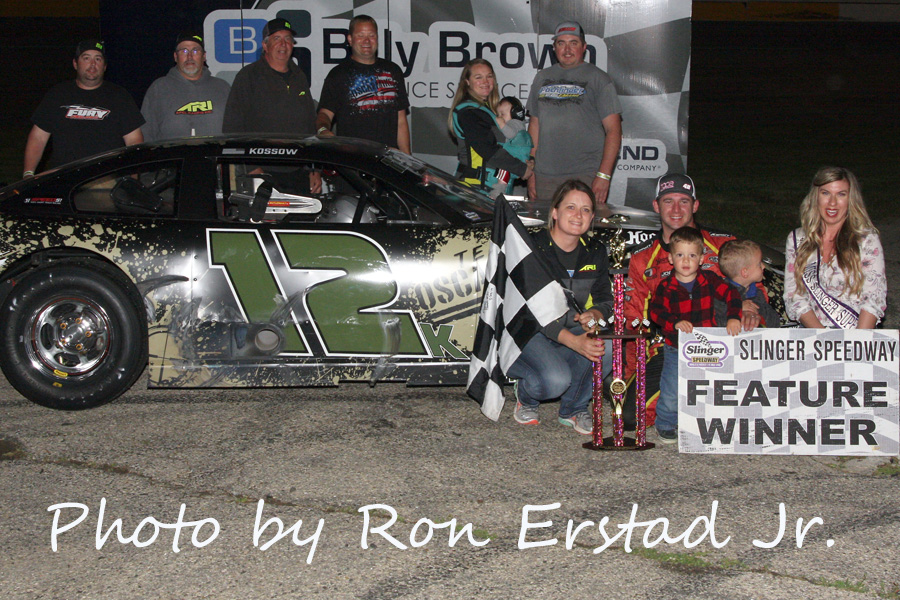