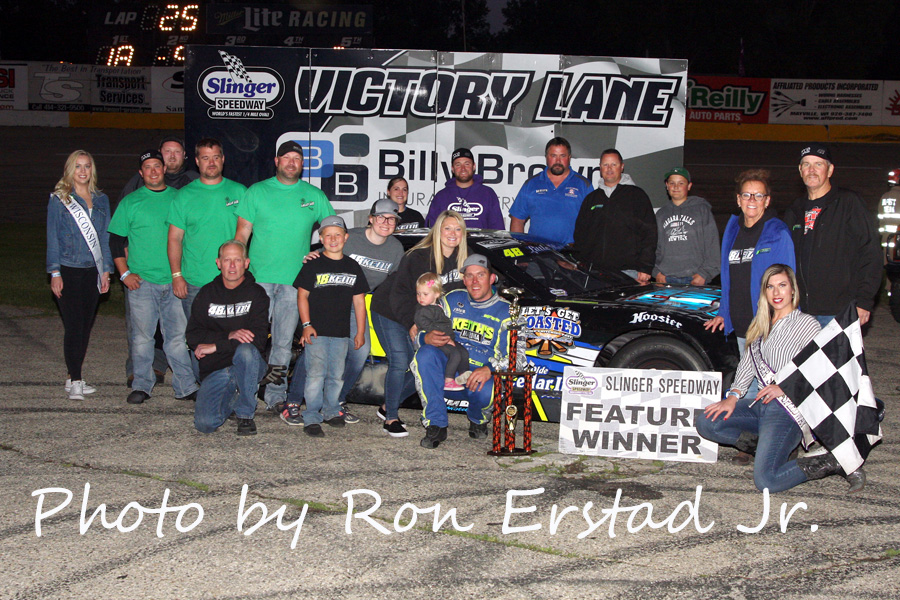 Slinger, Wis., June 16—Brad Keith found himself at the right place at the right time when dominating leader Brad Mueller experienced problems and he drove to his first super late model feature victory of the season in the PMF Landscape Supple Father’s Day 75 Sunday night at the Slinger Super Speedway.
Mueller charged to the lead at the drop of the green flag and appeared to have the race in hand as cruised to an immense four second lead while Keith battled hard with Alex Prunty, Steve Apel, and Ryan DeStefano for the remaining top five positions. However, on lap 52 Mueller’s car bobbled and he suddenly slowed with a broken axle being the culprit as Keith and the others rocketed by. Keith was then able to hold off his rival Prunty and the others to capture his first feature win of the season.

“We had a really good car but in the beginning we didn’t get going pretty good,” Keith said from victory lane, “but we got a little luck with Brad (Mueller) breaking.”

“I also have to thank Alex (Prunty) as last week we had a little misfortune and it was fun to come back and race him clean again the way that we should be racing each other,” Keith continued referring to a dust-up with runner-up Alex Prunty a week ago, “Last year we got our first win on Father’s Day night and we backed it up again this year.”

“The car wasn’t really that good and it pushed in the center of the turns so we have to get back in the shop and see what’s going on,” Prunty stated following his second place finish, “but it was still a good points night for us with a second place run.”

“We kind of got in a rhythm there in the middle of the race just to see how the car was, “Steve Apel said after his solid third place result once again driving the #12 car normally driven by Brad Kossow,” It wasn’t the same car we had last week but I have to thank Brad Kossow again and we’ll bring our car back next week and hopefully be in the top three.”

Ryan DeStefano raced up front the entire event and came home with a respectable fourth place finish and Grant Griesbach took the checkered flag in fifth. Dave McCardle completed his best race of the season so far with a sixth place result ahead of Mike Held and R.J. Braun. Jacob Vanoskey and Brad Mueller completed the top ten finishers.

Brad Mueller won the super late model fast dash and Brad Keith was the fastest qualifier after turning in a lap at 11.276 seconds.

Jacob Nottestad claimed yet another victory in the 40-lap late model main event for his third feature victory in four weeks.

Ryan Gutknecht paced the first 18 laps as Nottestad, Jack Stern, and Jerry Mueller all battled for positions behind him. Nottestad was able to edge around Gutknecht for the lead on lap 19 and a few laps later Jack Stern followed to move into second. Nottestad could not be caught in the closing laps as he charged to the win ahead of Stern who finished second for a fourth consecutive week. Gutknecht finished in third while Jerry Mueller and Jakob Hassler rounded out the top five.

Ricky Gebhard edged Al Strobel in a photo finish to win the 25-lap Slinger Bees feature. Strobel broke out of the 15.2 second bracket on the final lap and was disqualified leaving Matt Urban to finish second and Carl Benn third. Zach Greer and Mitchell Strobel rounded out the top five. Mitchell Strobel and Brady Held each won a Slinger Bee heat race and Brandon Mennicke was the fastest qualifier with a lap at 15.204 seconds.

The Bar Car race was won by Russ Dobberque in the Foolery’s car and Brandon Knepperath won the school bus figure 8 event for West Bend East and West high school in the match race with Slinger High School and Hartford High School. Ryan Lovald won the figure 8 race to close out the evening. 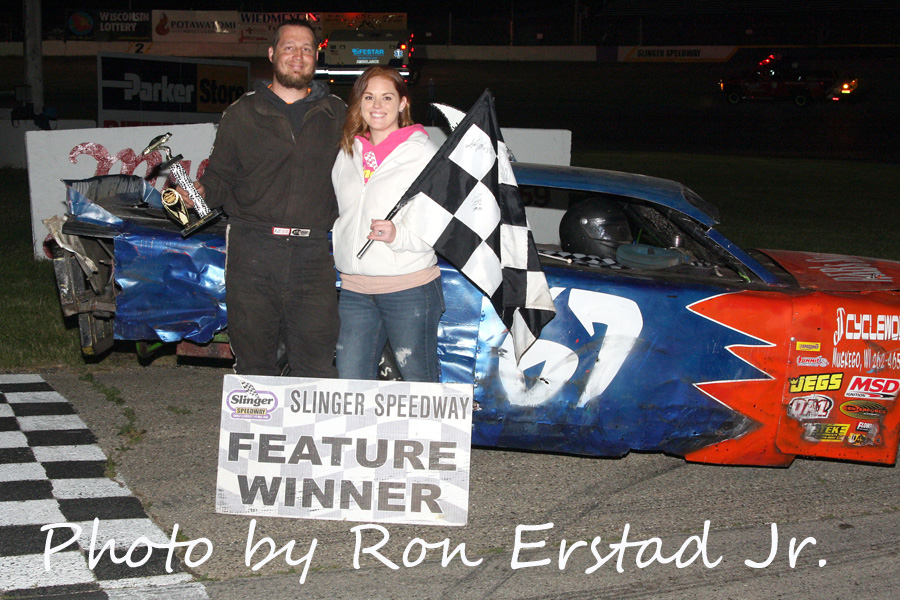 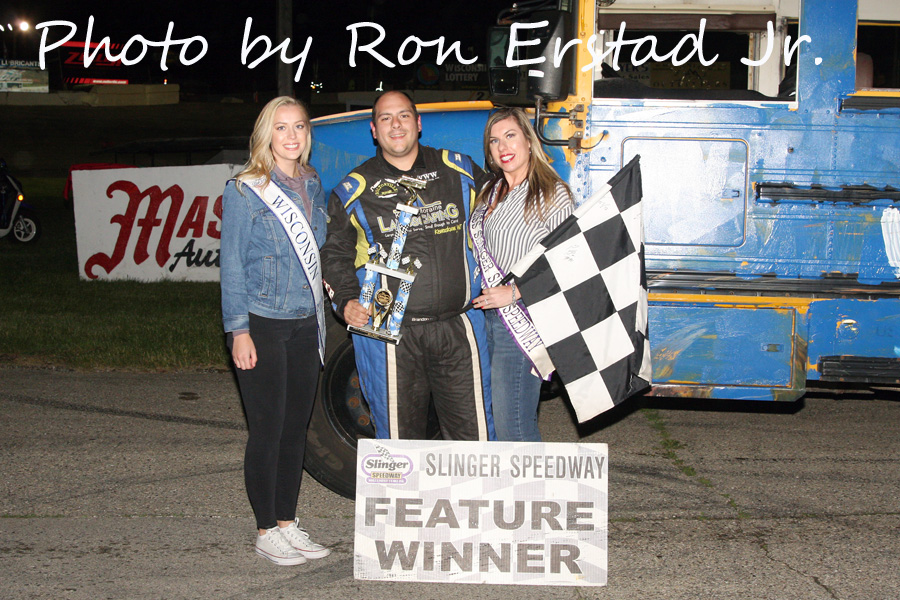 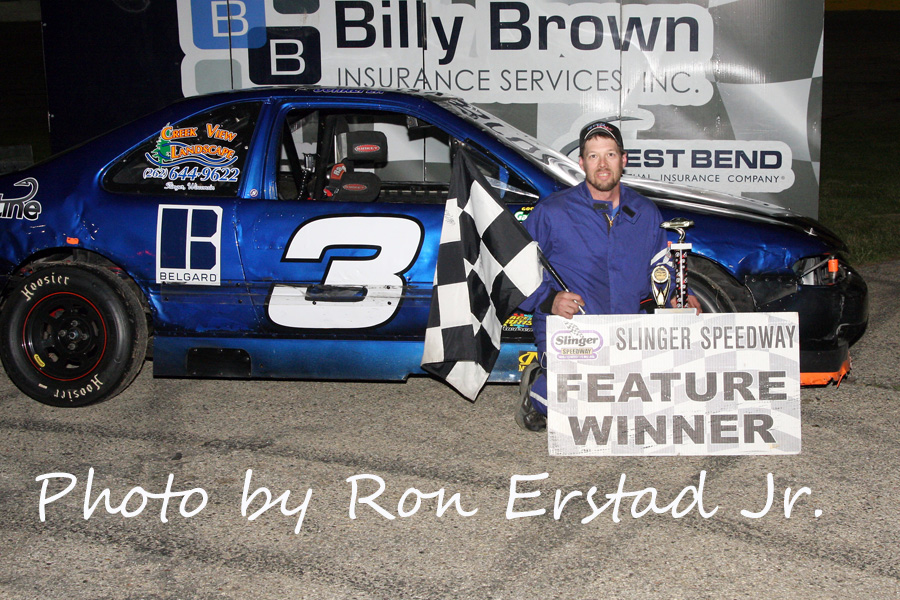 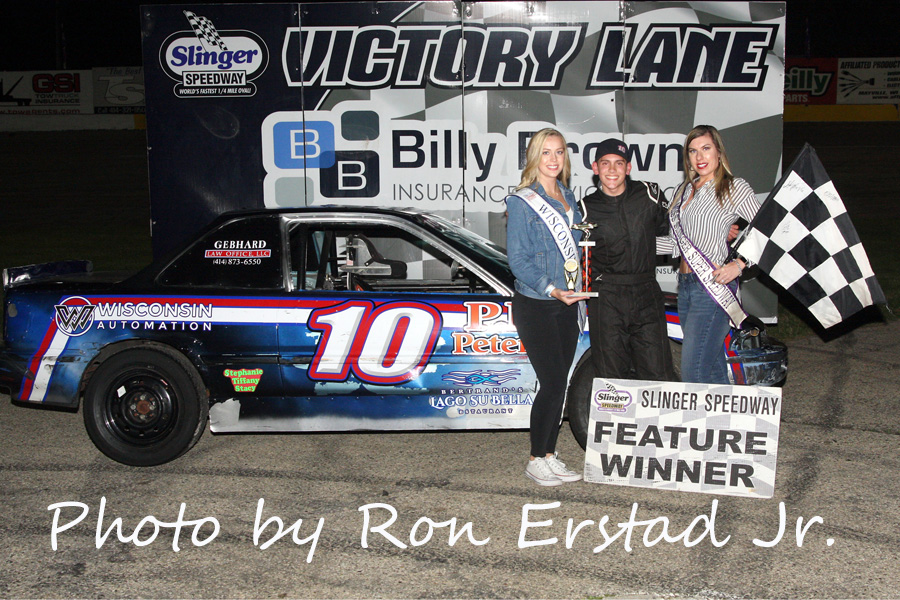 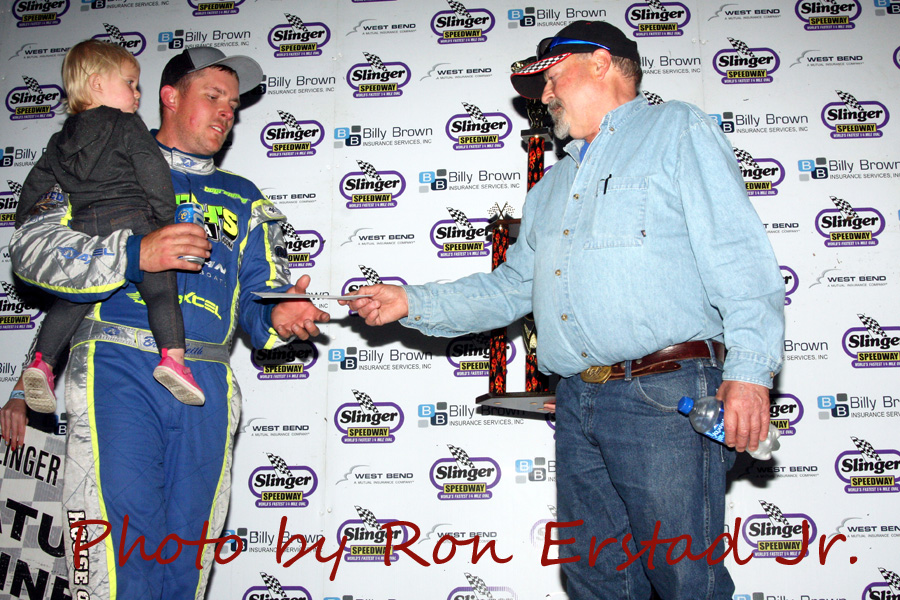 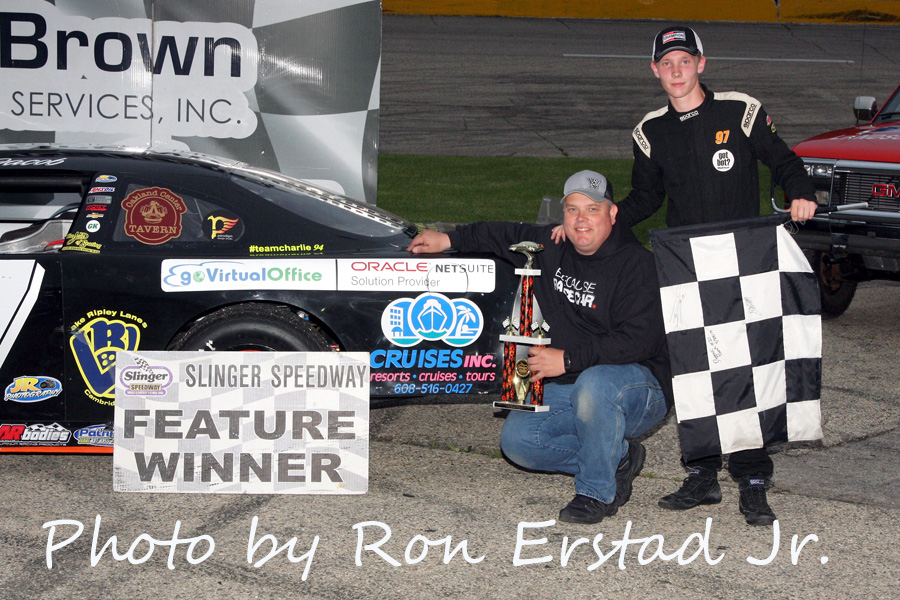 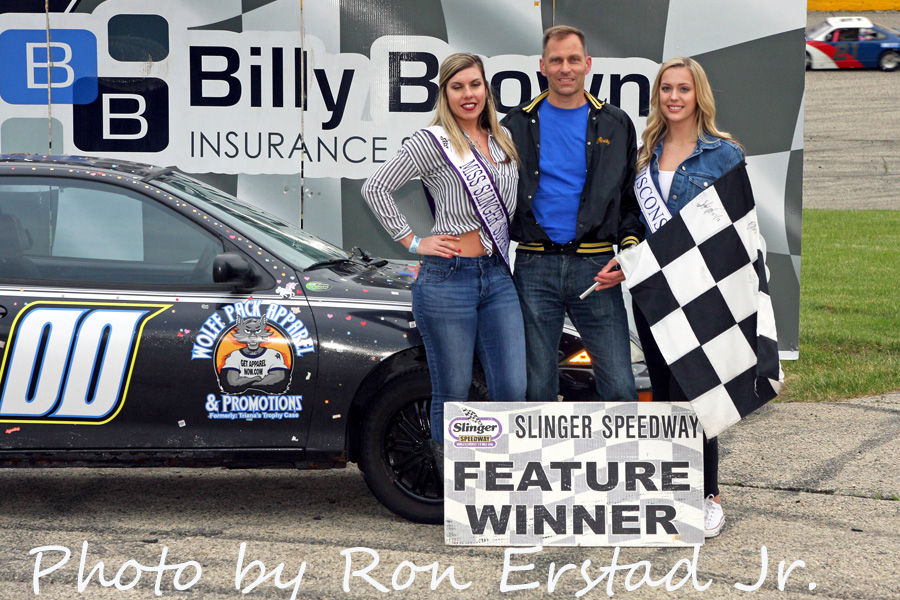 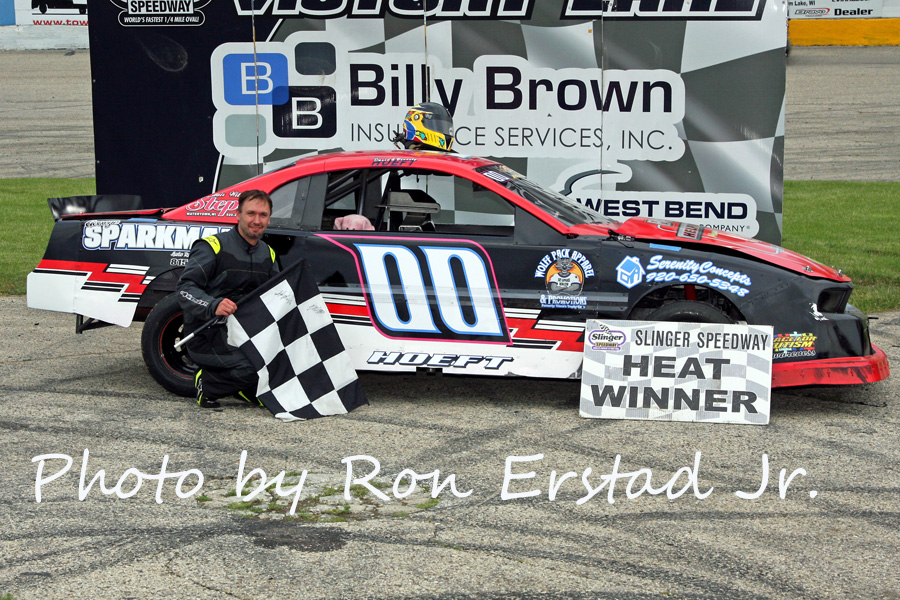 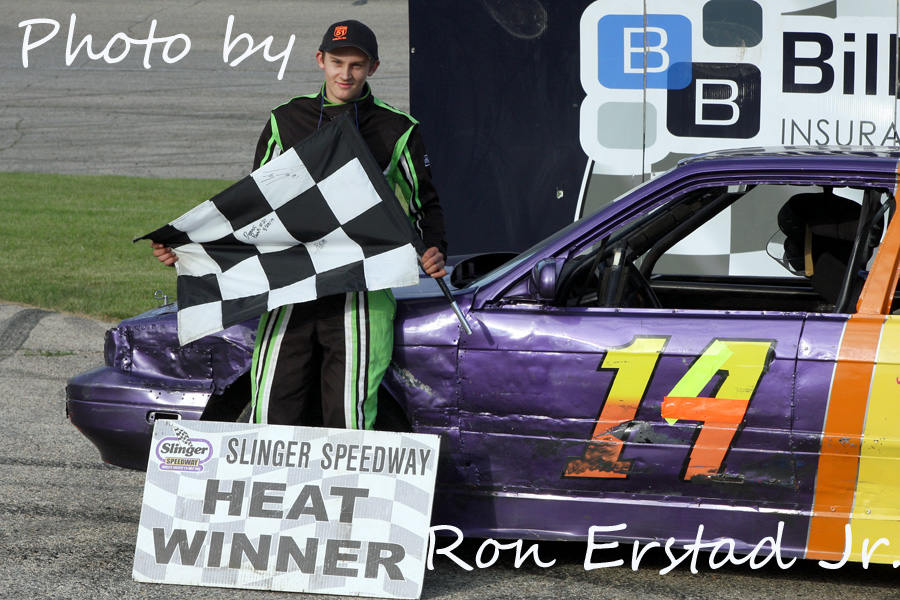 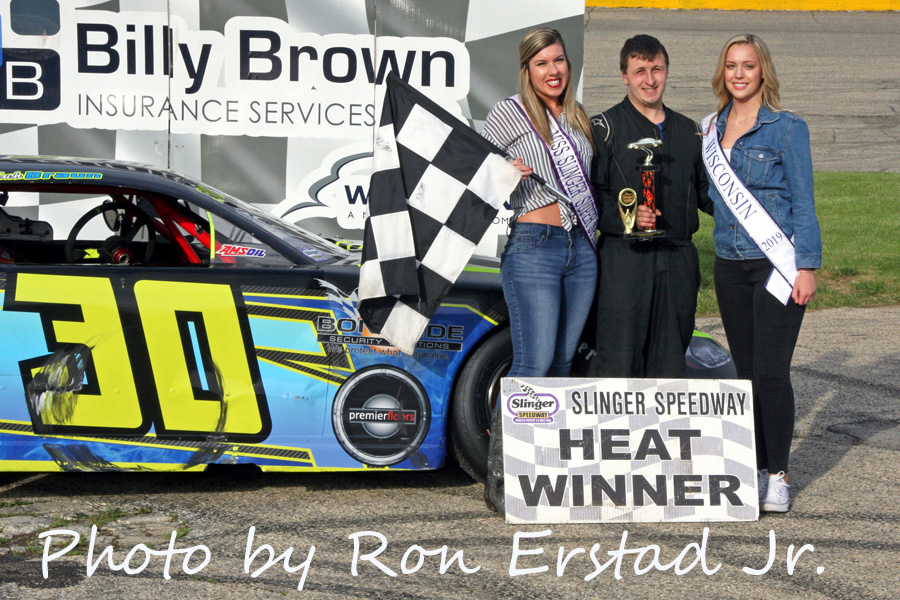 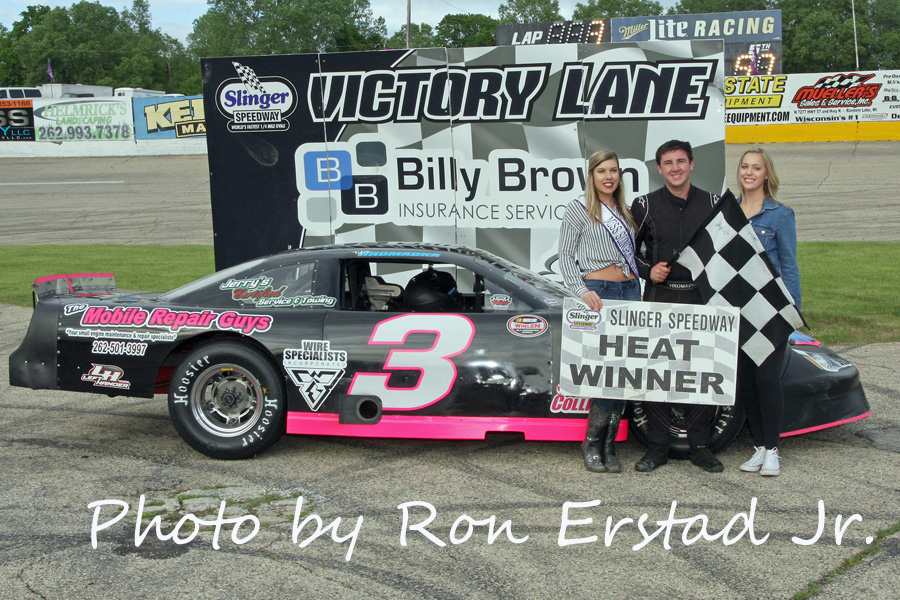 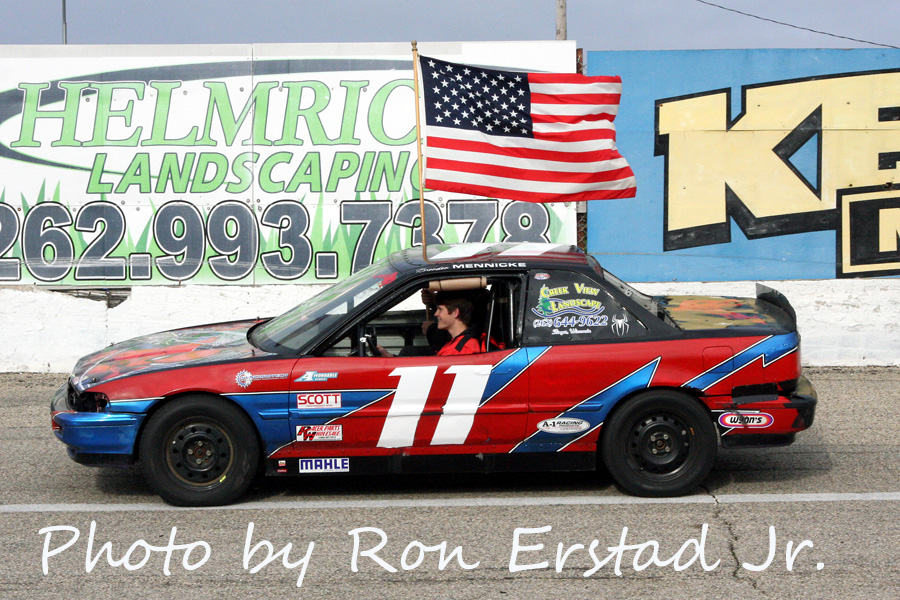 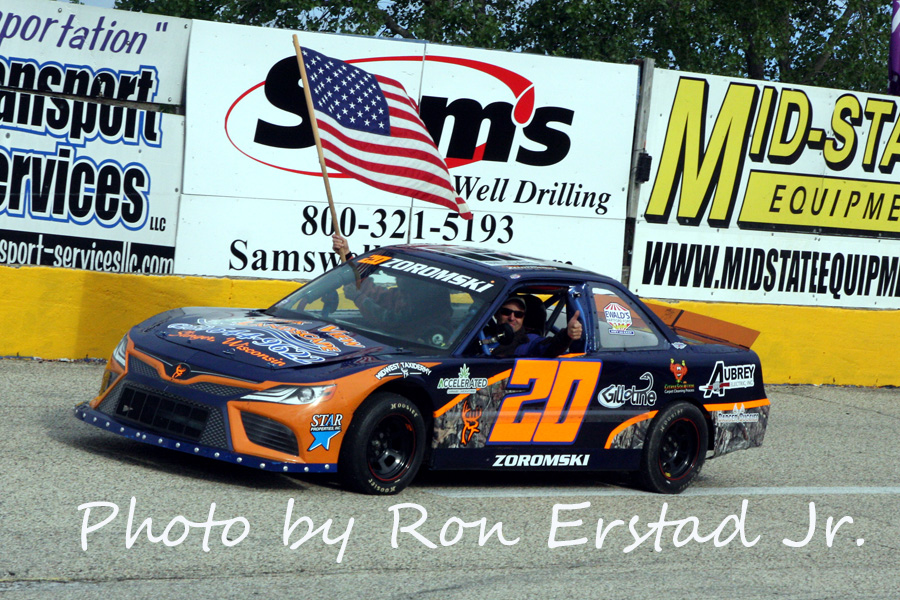 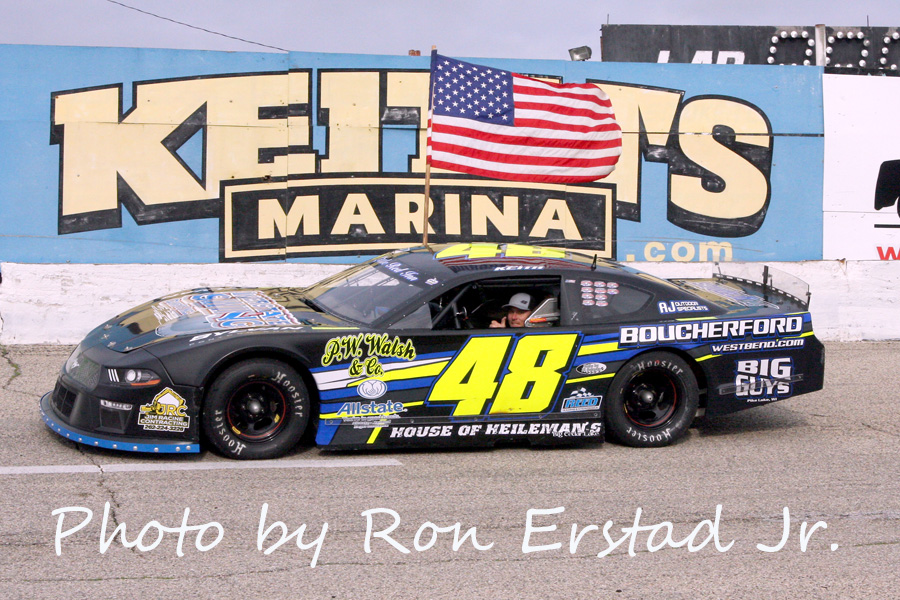 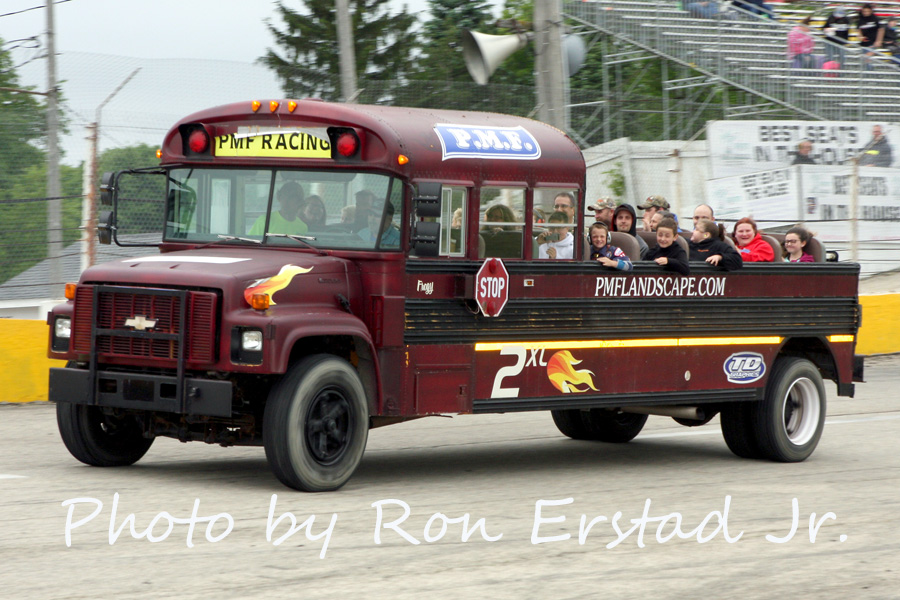