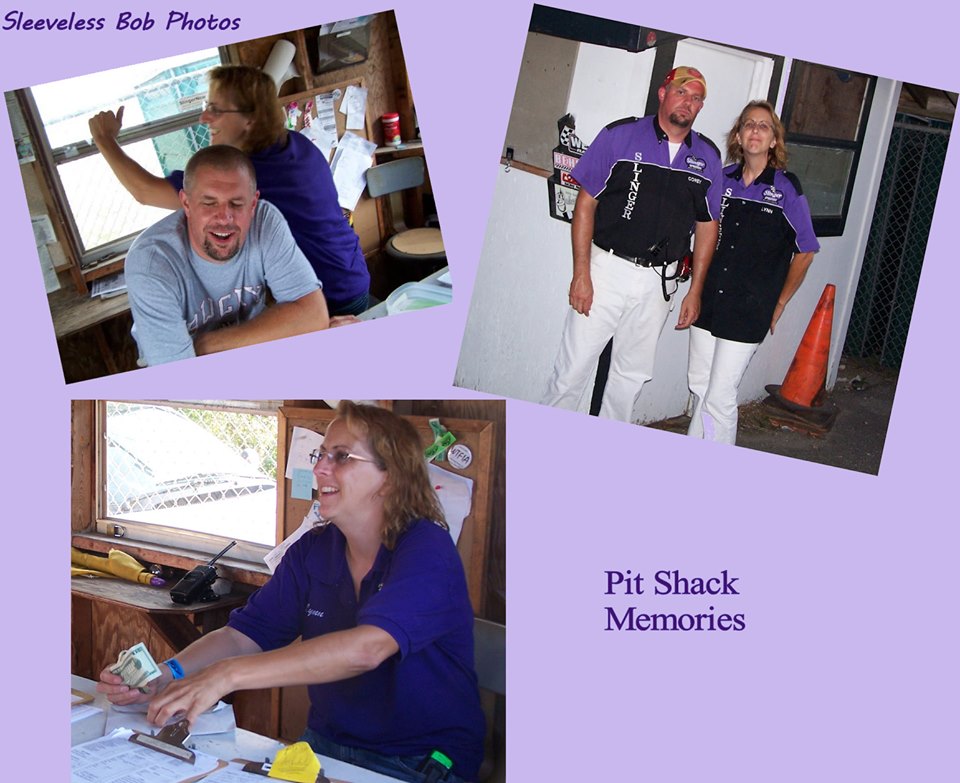 The Questioner role is being filled by Todd Thelen today.

1. Do you have a family member that raced or was on a race team? If not what attracted you to racing?
When I was a kid, my Uncle Denny (Duehning) worked at the track. Every Sunday, he would pick my older sister [Lisa] and I up and take us to the races, along with his daughters Tracy and Kelli. We’d sit up on the hill (in what is now Prunty Nation) with Mikey and “Little Tony” Strupp and cheer on the blue #12 Camaro of Tony Strupp. I don’t remember how old I was the first time he took us, or even for how many years. He passed away unexpectedly when I was 12, and those visits stopped. I went to the track on and off for the next 15 years or so, then applied for a job in the beer stand. Donna Zenisek was the secretary then and she called and asked if I’d be interested in a job in the pit shack registering drivers instead. That sounded interesting…I did that until 2010, when I moved south to take a job teaching on the Army base at Fort Campbell, Kentucky. Then last year, you invited me to get back involved, and here we are.

2. What is your real job?
I’m a teacher at a juvenile detention center. My students are anywhere from 10 to 17 years old and can be with me for a few hours, a few months or anywhere in between. In some ways it is challenging, and in others it is actually easier than being in a traditional classroom. Either way, I absolutely love it. I also bartend every so often, do booze/beer/wine samplings for a company out of Milwaukee, and coordinate the ticketing staff for the Washington County Fair. In my spare time, I volunteer at Make A Wish once a week, and am also a Wish Granter for them. Plus, of course, I spend a minute or two on track stuff each week. I like being busy.

3. What was your first car?
A 1977 Pontiac Grand Prix, gold with pinstriping, fat tires, chrome wheels, jacked-up rear end. I lovvvvvvved that car. For my senior pictures, I spent all day washing and waxing the car (it was in the pic with me, obviously), then took about 15 minutes to get myself ready – actually dried my hair by sticking my head out the window as I drove to the photographer’s house. Then it started nickeling and diming me to death. I sold it to a friend…who later sold it to Chris Beine…who turned it into a thunderstock. Remember the t-stock that had the boat motor on the back of it?? Yup, that was my baby. I will never forgive him.

3. What was your favorite memory when you worked the back gate with Corey Abel?
Nationals, I think it was 2008. Rains out on Tuesday. Wednesday, Corey and I get to the pit shack and there’s already a long line of people waiting to swap out their wristbands. Dick Trickle pulls up to the gate from inside the track, so I grab the clipboard to get him signed in and banded. He says, “Darlin’, wanna come along for a few laps?” Robbie Konrath was the scoreboard operator back then, and was just walking into the shack to sign in. I threw the clipboard on the counter, yelled to Robbie that he was doing wristbands, and ran to the car. Ed Cluka moved to the backseat and I jumped in the front. Cluka read off lap times as we went around “18.5, 18.3…”. I don’t think I stopped smiling for hours! Ohhh, was my story supposed to include Corey? Hmmmm….ummmm…wait I can think of something…ahhhhh… Seriously, though, Corey and I had a lot of fun and worked well together. He has a lifetime supply of Monkey Butt Powder because of the drivers and I. Maybe someday he will even grace us with his presence at the track again ; )

4. What has been the most challenging over the last year at Slinger Speedway? (can’t say working for me that’s too obvious)?
The weather?? Keyboard warriors on social media who don’t realize they are hurting all racing….or that the kids, wives/husbands/etc read the stuff posted about their loved one?? Let’s go with not having enough time to do everything we want to do. So many great ideas have been presented this season, there just aren’t enough hours in the day to implement them.

5. What has been the most rewarding over the last year at Slinger Speedway?
All of the people who have messaged, called, and/or stopped me to say they love the change that is happening, and asked how they can help. This whole #makeslingersuperagain thing is happening because SO many people want to see this track stay open. I get far too much credit for it; there are a lot of people working on it. I’m just the loudmouth who gets the word out about it all.

6. What is your favorite food?
It varies, but pretty much anything I’m not allergic to. That means no tree nuts, peanut butter, coconut, watermelon/cantaloupe/etc, asparagus, sunflower seeds, teriyaki seasoning…the list goes on, I can’t think of them all right now. One of my friends has a list on her phone so they don’t kill me when they invite me over for dinner.

7. Where is your favorite place to vacation?
Anywhere I haven’t already been! After I hit Oregon in a couple of weeks, I will have visited 35 states. I like seeing what this beautiful country has to offer. If I can find a racetrack where I’m going, that’s a bonus (planning to hit Cottage Grove Speedway while in Oregon) or sometimes I plan a trip around a track. Last summer I finally made it to Anderson [Indiana] and also made the trek to Toledo Speedway. I’m hoping to hit Winchester for my birthday weekend in October this year. I’m told it’s like a “big Slinger”.

8. What 8 drivers would be in your “All Star” heat race (alive or dead), they had to race Slinger Speedway at least once?
You could have been nice and said they can’t currently be racing at Slinger, to help me stay out of trouble with anyone. I can make the rules up as I go, right? Good. The question has been amended to only those who no longer race. Since you said “alive or dead”, I’m going with the thought that they are racing at their “prime” in this race and they are all in identical cars like the old IROC series. Kris Kelly, Josh Bauer, Tony Strupp, Miles Melius, Austin Konetski, Todd Thelen (people will read about your racing past in the yearbook, let’s see how you stack up against these guys!), Willie Goeden, Kenny Wallace (just because he would make the pre- and post-race so much more entertaining), Joel Laufer, Dick Trickle.

9. Have you ever raced? If not would you like to take a few laps some day?
I’ve raced a Bee once and the Port-A-Johns cars twice. I’m s l o w. Frank Verhunce and Rick Bruskiewicz used to keep their Bee by me during the week, and I asked if I could race it one week. When I asked “permission” from the powers-that-be (since I was working in the pit shack at the time), Rodney told me once was fine, but racing every week was not an option. Yea, that really wasn’t a concern. I was waaaaay too distracted by everything I could see; it’s a pretty cool view! I actually waved at Corey when I came around two – he responded with the “hurry up” motion. In response to your second question, I actually would love to drive a super late model at Slinger! Definitely not in a race, definitely all alone on the track, and Leonard can definitely not FB Live it!

10. If you could have dinner with any 3 people (alive or dead) who would they be and why?
My Uncle Denny – he was one of those people that everyone loved – the life of the party. I had a conversation recently with Joel Laufer about Denny, and I said I wish I would have been old enough to hang out at the bar with him (like I said above, I was 12 when he died). Joel just laughed, which reaffirmed my belief that it would have been a great time!
My good friend, Eddie Moser, who was killed in a motorcycle accident in 1987. He was such a great guy and I think of him often. This dinner would need to have a mini-bottle of Tobasco Sauce, because Eddie was known for chugging them on a bet (for, like $1).
My son, Kyle – Both Denny and Eddie passed before Kyle was born. He’s heard lots of stories about both, and I’d want him to meet these two amazing people who were so important to me.