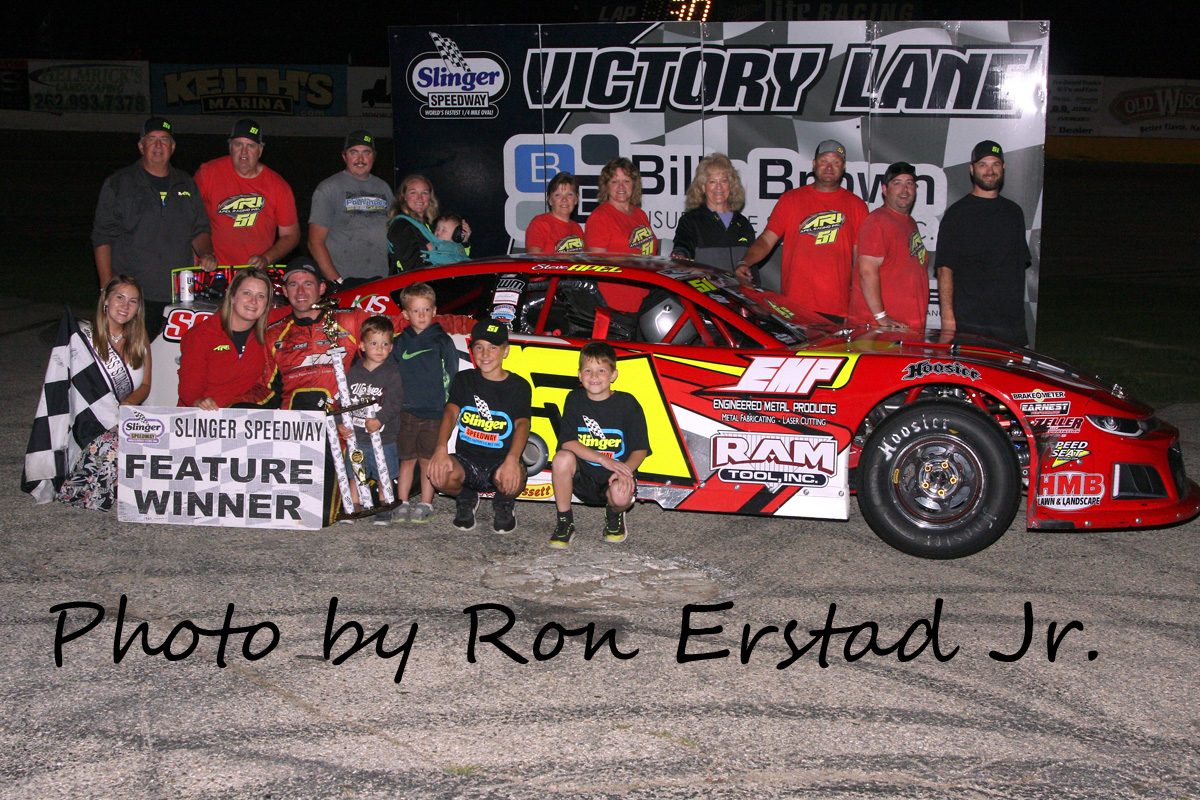 By Dan Margetta
Slinger, Wis., July 21— Steve Apel propelled himself from third place to the victory when leaders Alex Prunty and Brad Mueller tangled on a green-white-checkered final restart in the “Back in the Day” 75-lap super late model feature presented by the Washington County Fair Sunday night at the Slinger Super Speedway.

“We caught the top two late in the race and I really didn’t have anything for them but then the caution came out,” Apel told the crowd gathered around victory lane, “I saw a heck of a battle for the last 20-lap or so before that and Alex (Prunty) was trying to give Brad (Mueller) the bottom and it looked like Brad had the faster car. Then on the restart, I knew Alex (Prunty) was going to push out and I’m not sure if he pushed out but somehow they got together and we ended up here in victory lane, what a way to end the week.”

Alex Prunty and Brad Mueller were the story of the race until the final restart as they staged an intense but enjoyable battle for the lead with Mueller making numerous attempts to pass on the inside lane while Prunty worked the top side and used lapped traffic to his advantage. A final caution flag for a single car spin in turn one set up the green-white-checkered finish and set the table for the dramatics that followed. As the leaders took the green flag for the final restart somehow Prunty’s right rear and Mueller’s left front made contact just past the start finish line and created a chaotic scene entering turn one. Apel, who was running third at the time cleared the scattering cars ahead of him and charged into the lead bringing Dennis Prunty along with him. Apel was then able to drive to the victory with Dennis Prunty in tow while Brad Keith and Grant Griesbach took the checkered flag in third and fourth respectively. Brad Mueller was able to recover to finish fifth. Nick Wagner finished sixth and Conrad Morgan was seventh while Alex Prunty fell to eighth in the final laps. Ryan DeStefano and Jacob Vanoskey rounded out the top ten.

Many of the players in the fireworks at the end of the race presented their viewpoints afterwards beginning with Dennis Prunty who was sent to the rear of the field after tangling with Conrad Morgan while battling for the early lead before slicing his way to second at the finish.

“The car was just OK and we just had to pick them off one at a time and do the best we can,” Dennis Prunty explained afterwards, “After that happened (being sent to the rear) I had two choices, either load it up and go home or give it all I got, and I gave it all I got.”

“I was way too loose and was doing everything I could to hold Brad (Mueller) off on bottom,” Alex Prunty told the crowd afterwards, “Finally it came down to two to go and I thought we were clear.”

“I did get a little bit free off the corner but the 11 (A. Prunty) wasn’t clear,” Brad Mueller stated after the race, “If the roles were reversed I wonder if I would’ve gotten punted out of the way because I ran him like a king for all those laps. He gave me the bottom one time and I couldn’t get it done, but right now…I’m just really disappointed.”

Conrad Morgan won the super late model fast dash and Nick Wagner was the fastest qualifier after circling the speedway in 11.305 seconds.
Jacob Nottestad took the lead with eleven laps to go and charged to his fifth late model feature win of the season in the 40-lap main event.
Brad Hetzel paced the first two laps before Tom Berens took command of the race on lap three. Berens held the top spot until a lap 28 restart following the only caution flag of the event as Nottestad was able to power by for the lead. Jack Stern advanced his way into second during the closing laps but could not catch Nottestad who drove to the victory. Stern had to settle for second while early leader Berens finished third. Tyler Schley and Zach Prunty charged forward late in the event to claim the fourth and fifth finishing positions respectively. Zach Braun and Tyler Hromadka were the winners of the late model heat races and Jack Stern set fast time at 12.079 seconds.

Paul Wagner held off Dale Lecus and Jacob Schraufnagel in a thrilling three-car battle to the finish in the 30-lap sportsman main event. The excitement was set up when leader Andrew Meyerhofer was unable to avoid a spun car in turn four with three laps to go and left the speedway as the caution flag waved. Wagner, Lecus, and Schraufnagel raced hard for the win with Wagner claiming the victory at the stripe over Lecus Schraufnagel. Adam Bleskan finished fourth and Bobby Giers was fifth. Mark Pluer and Dale Lecus were the winners of the sportsman heat races and Jacob Schraufnagel was the fastest qualifier at 12.689 seconds.

Mark “Kurly” Kissinger won the Bar Car event driving for the Finish Line and the team cruiser race was won by Zach Greer and Garrett Konrath. Ryan Lovald won the Figure 8 race to close out the evening. 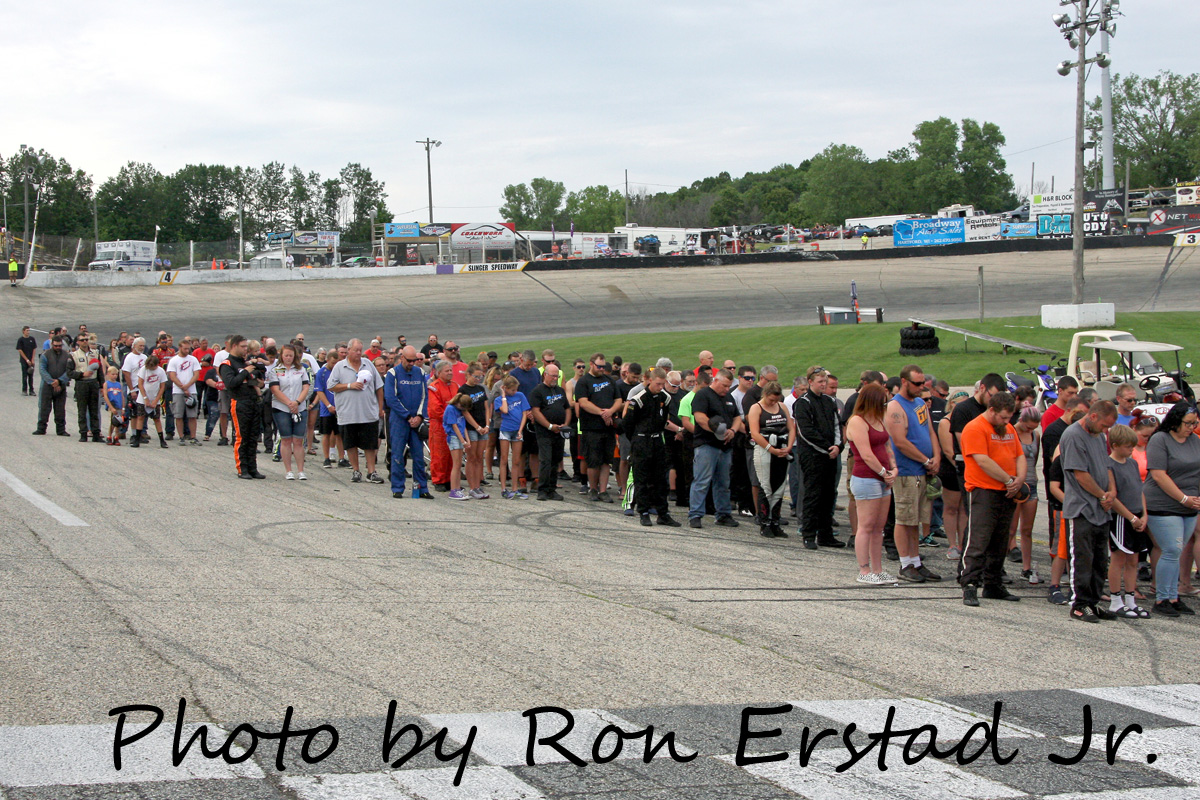 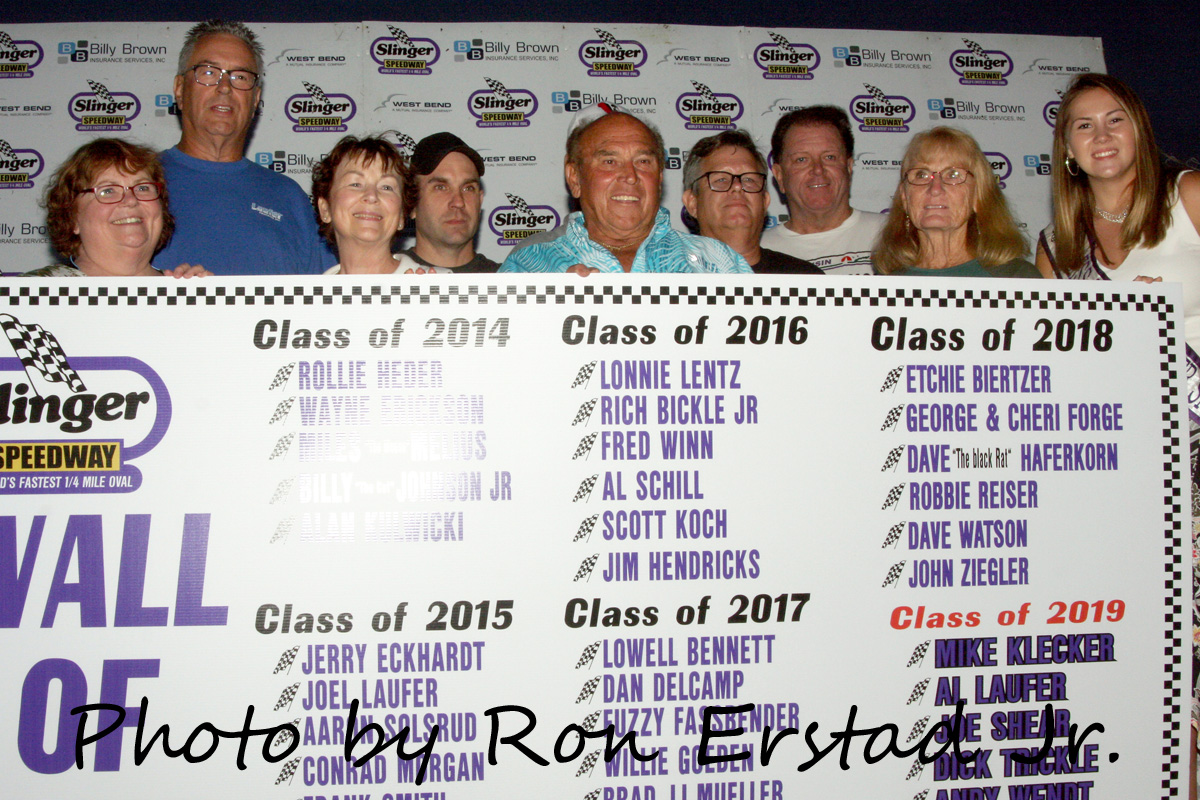 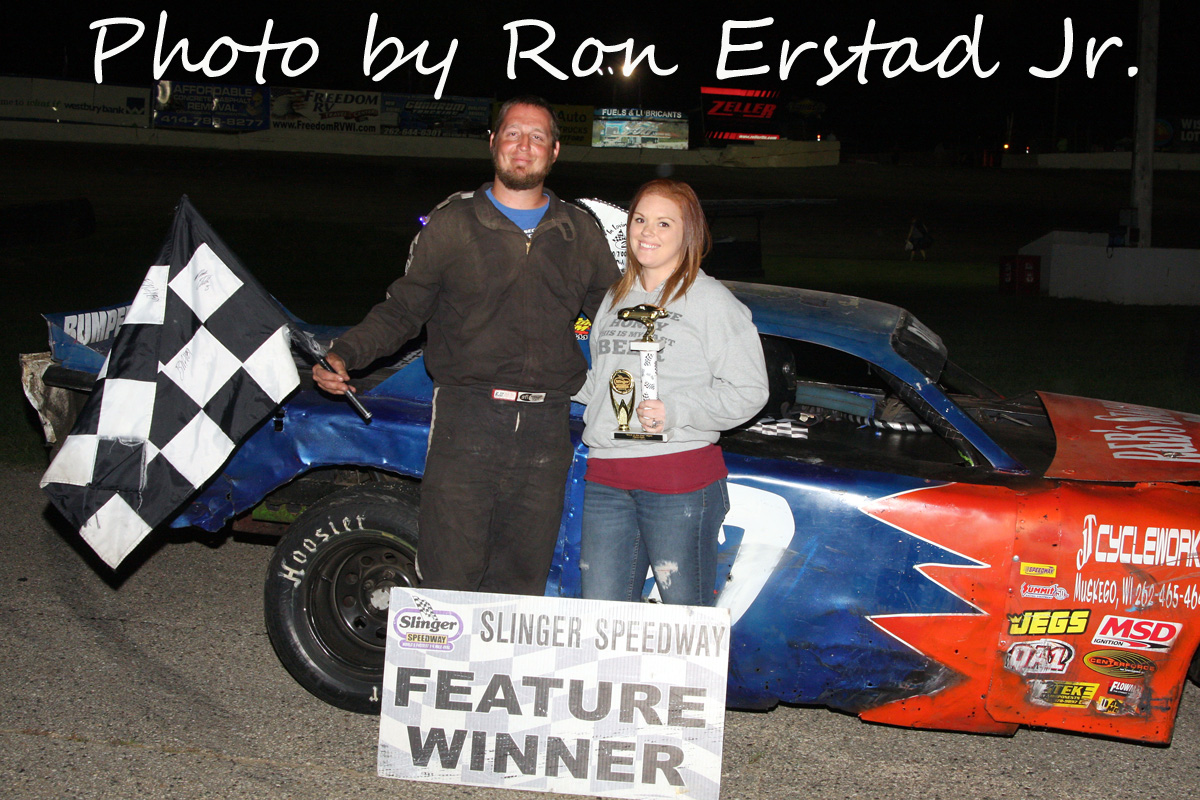 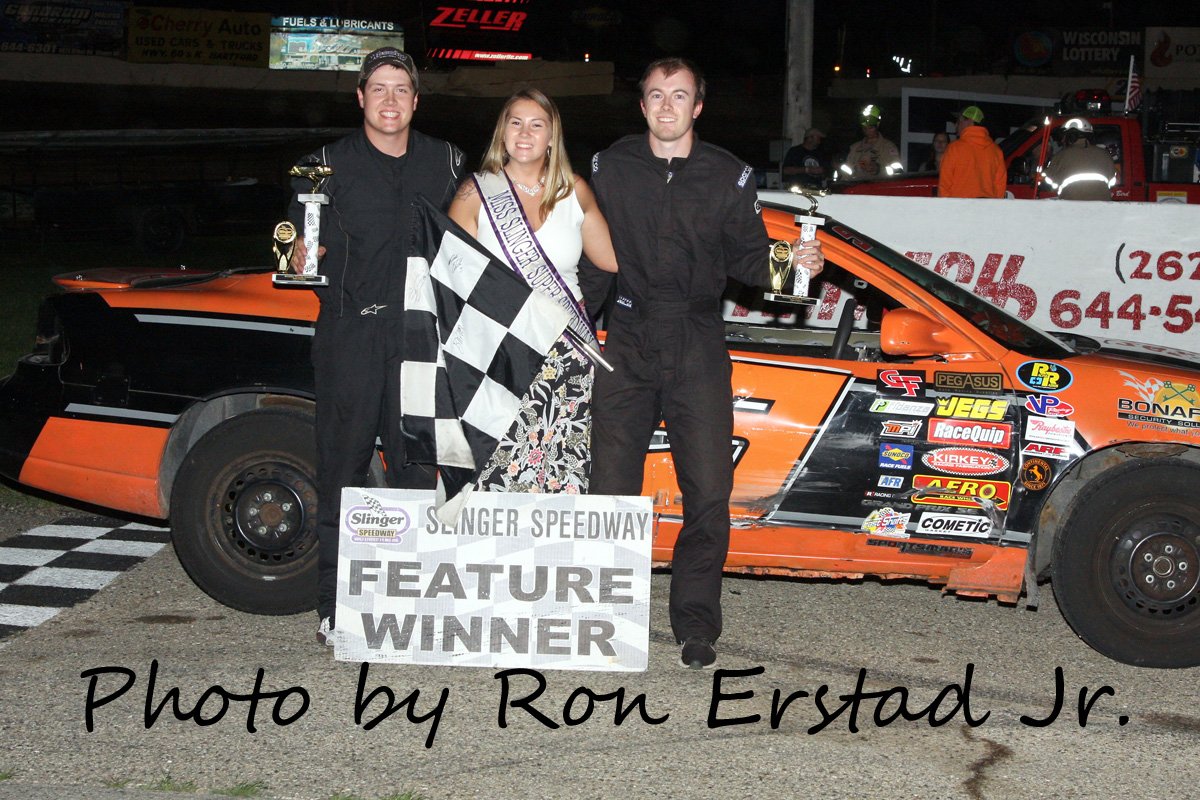 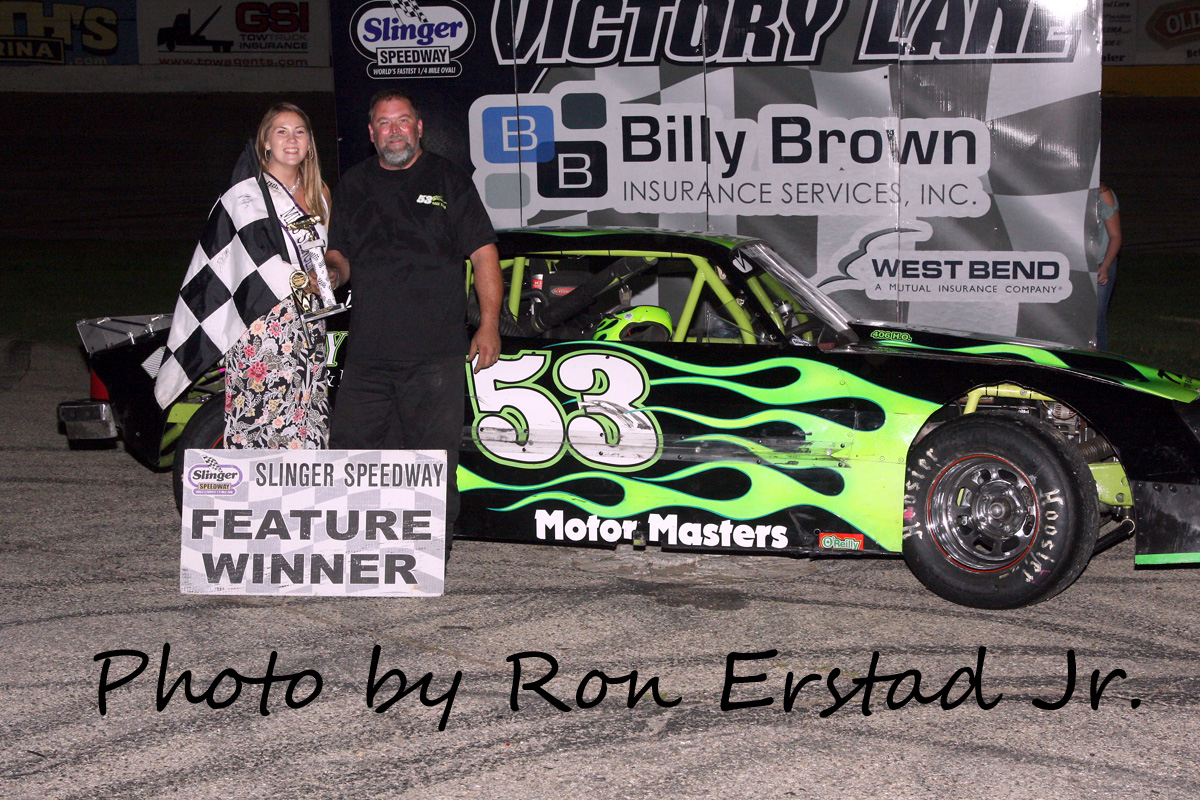 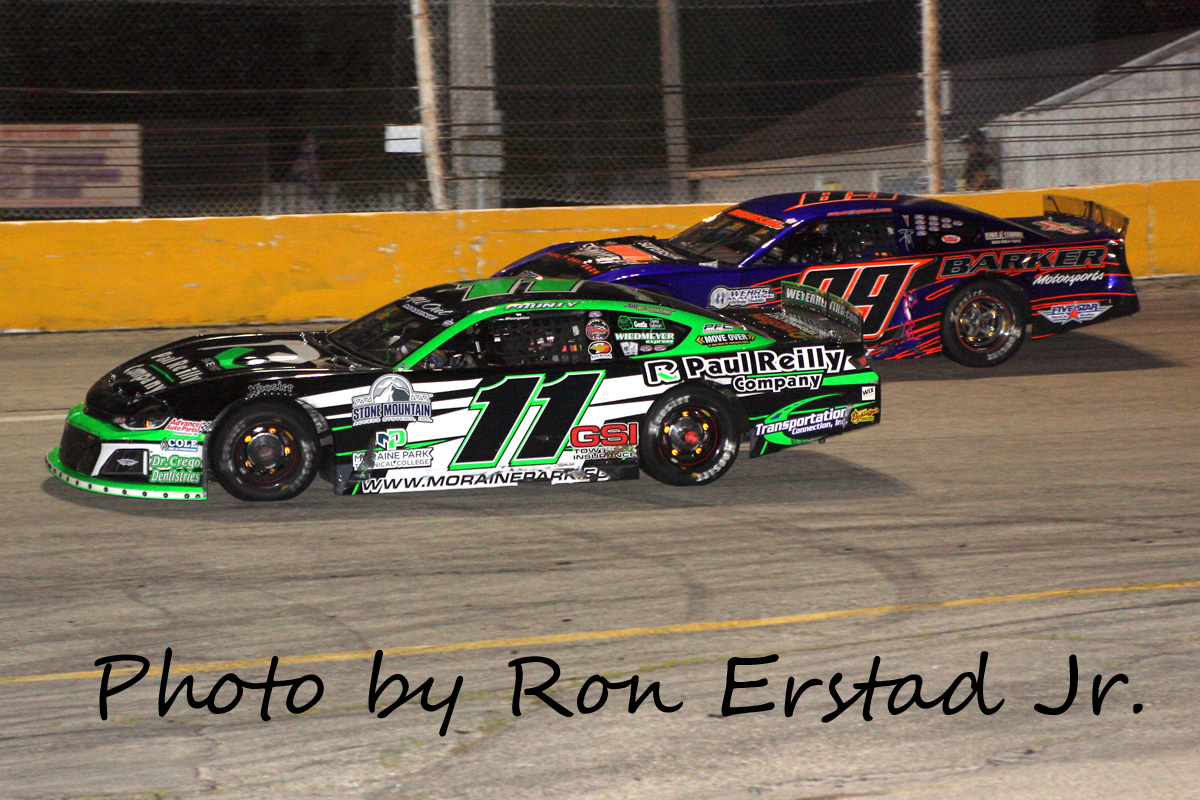 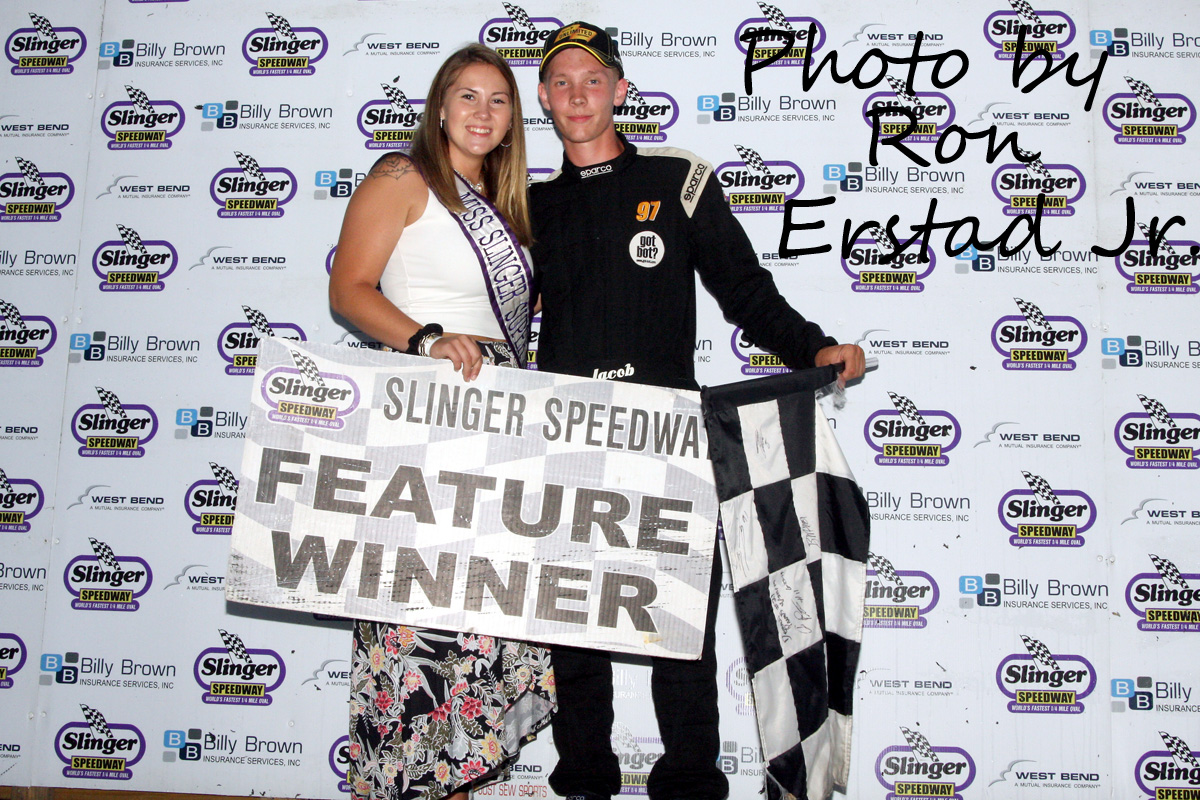 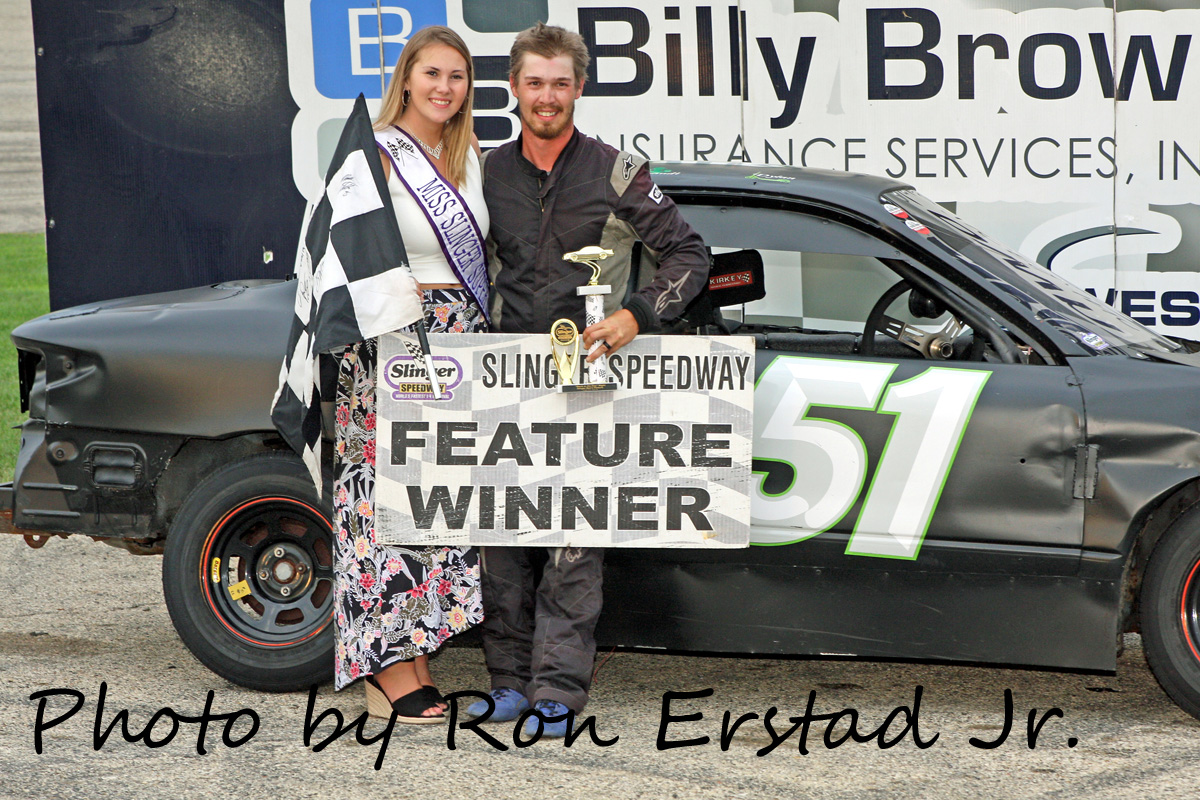 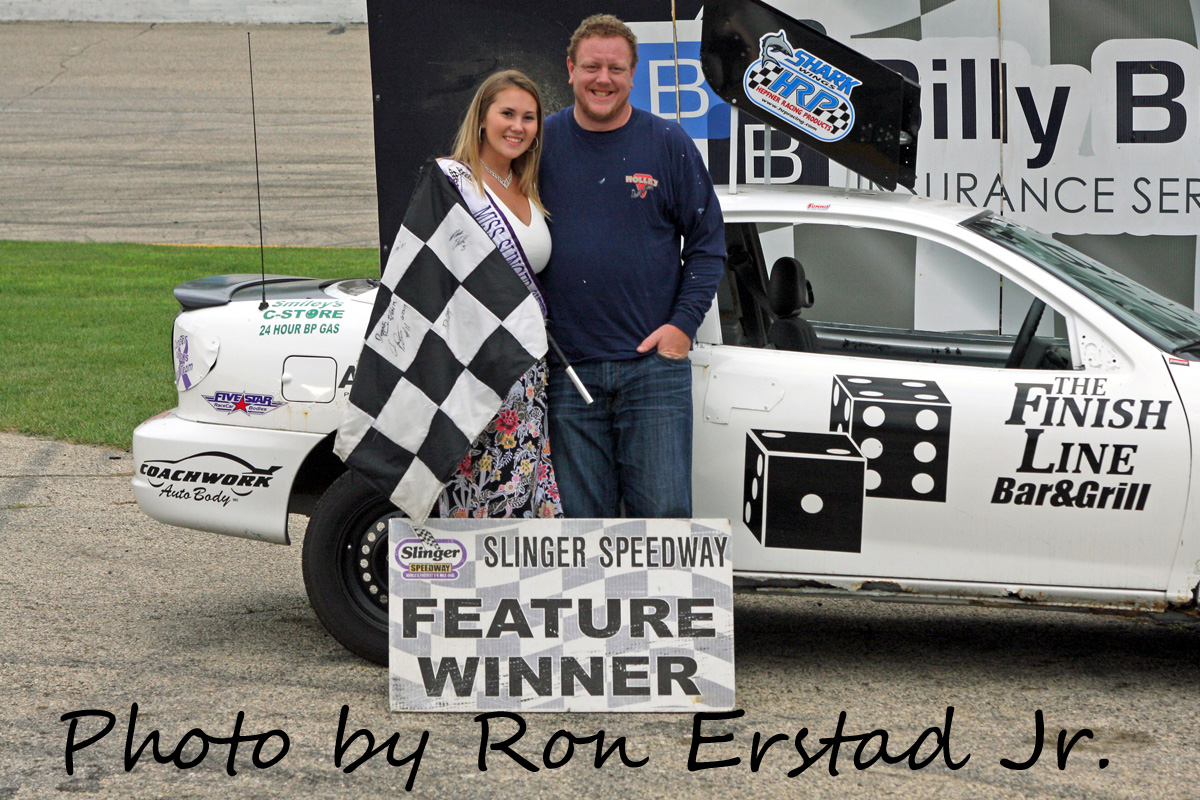 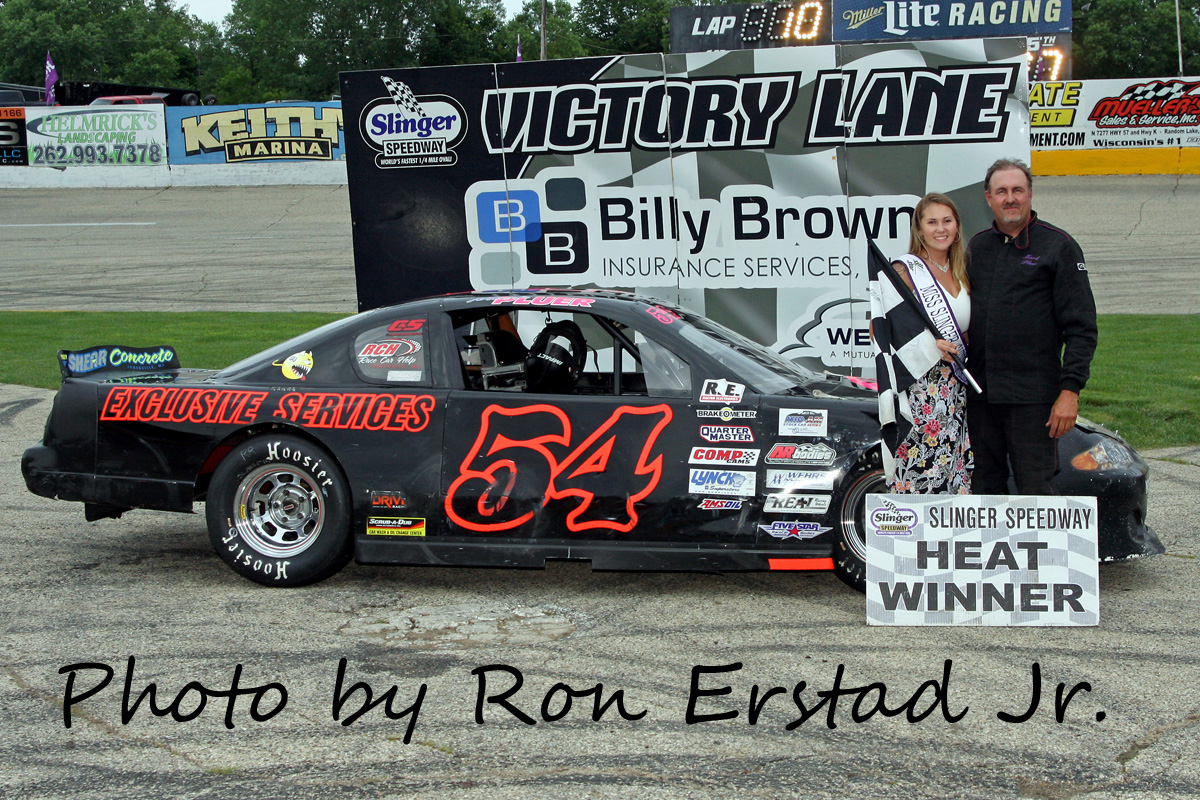 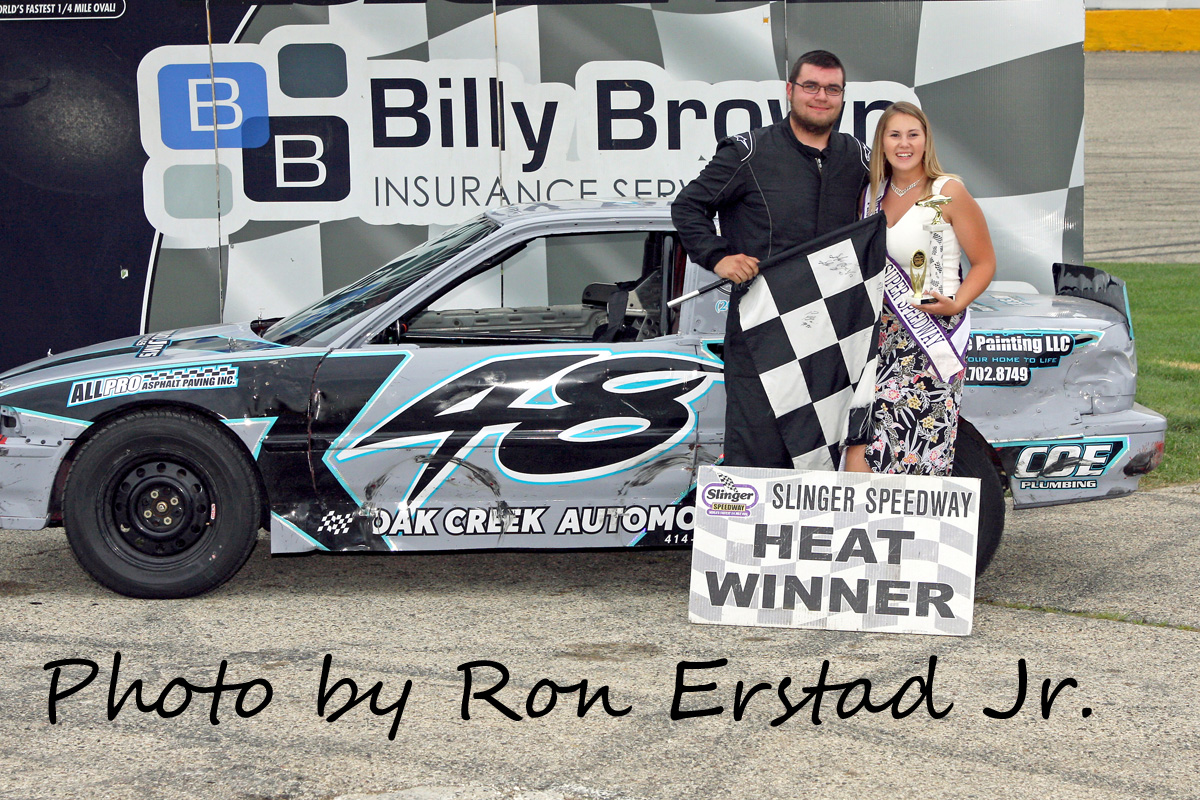 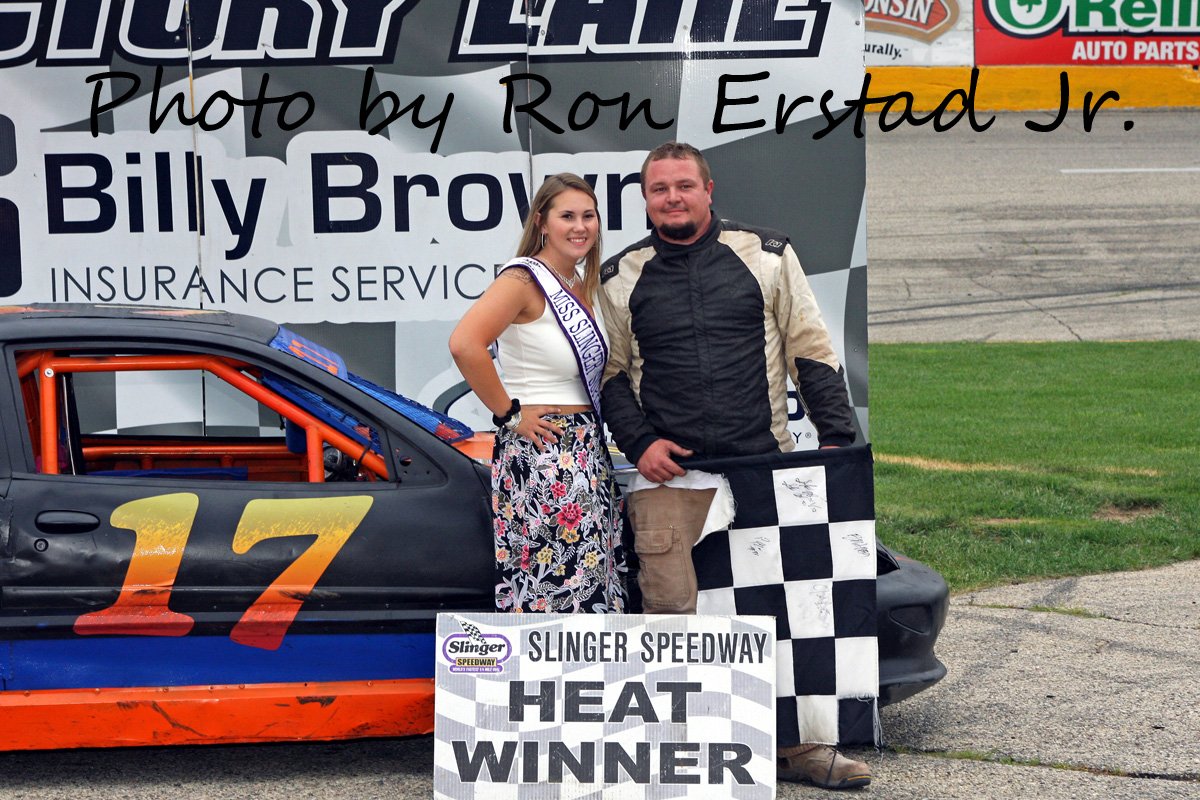 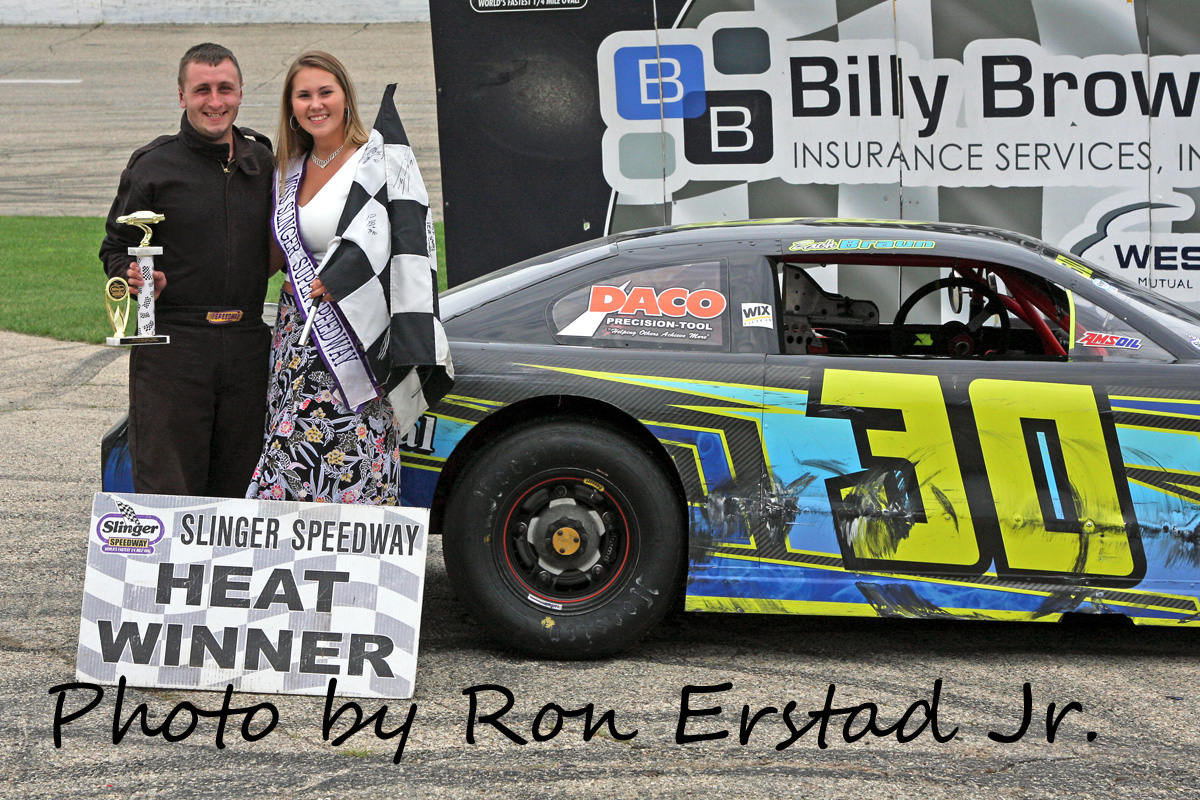 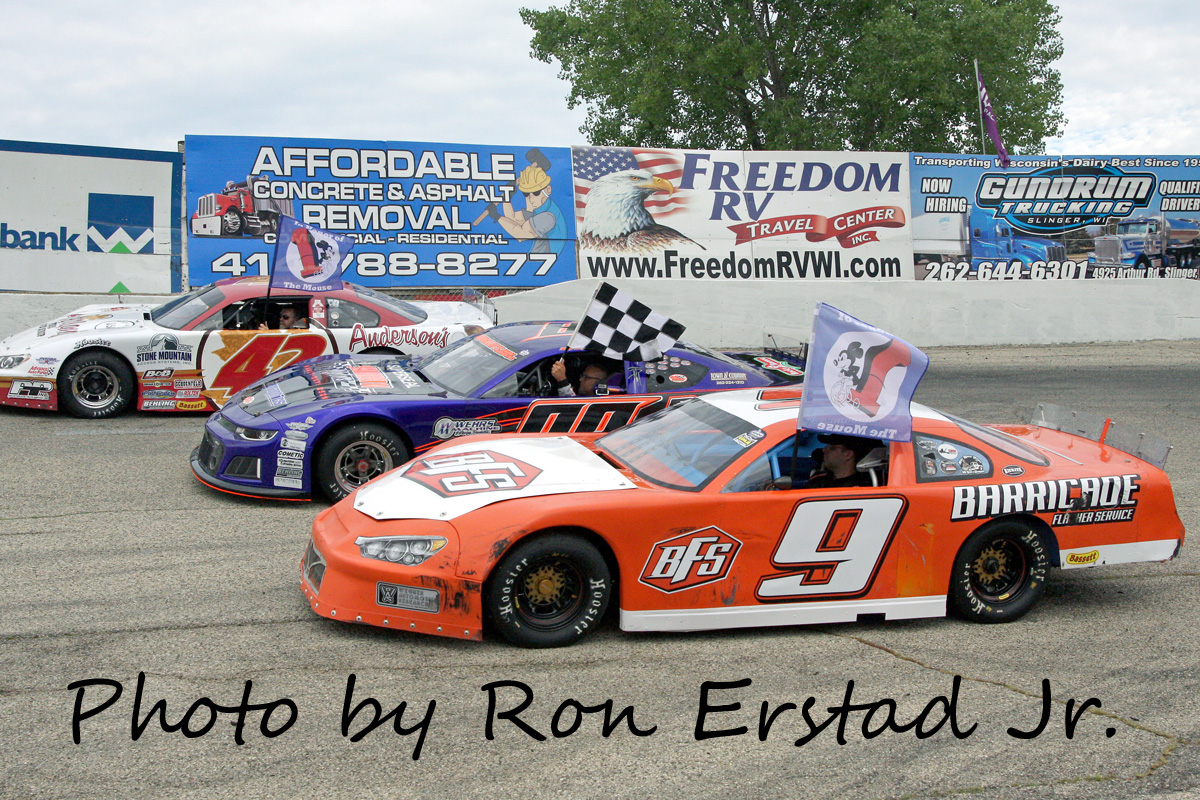 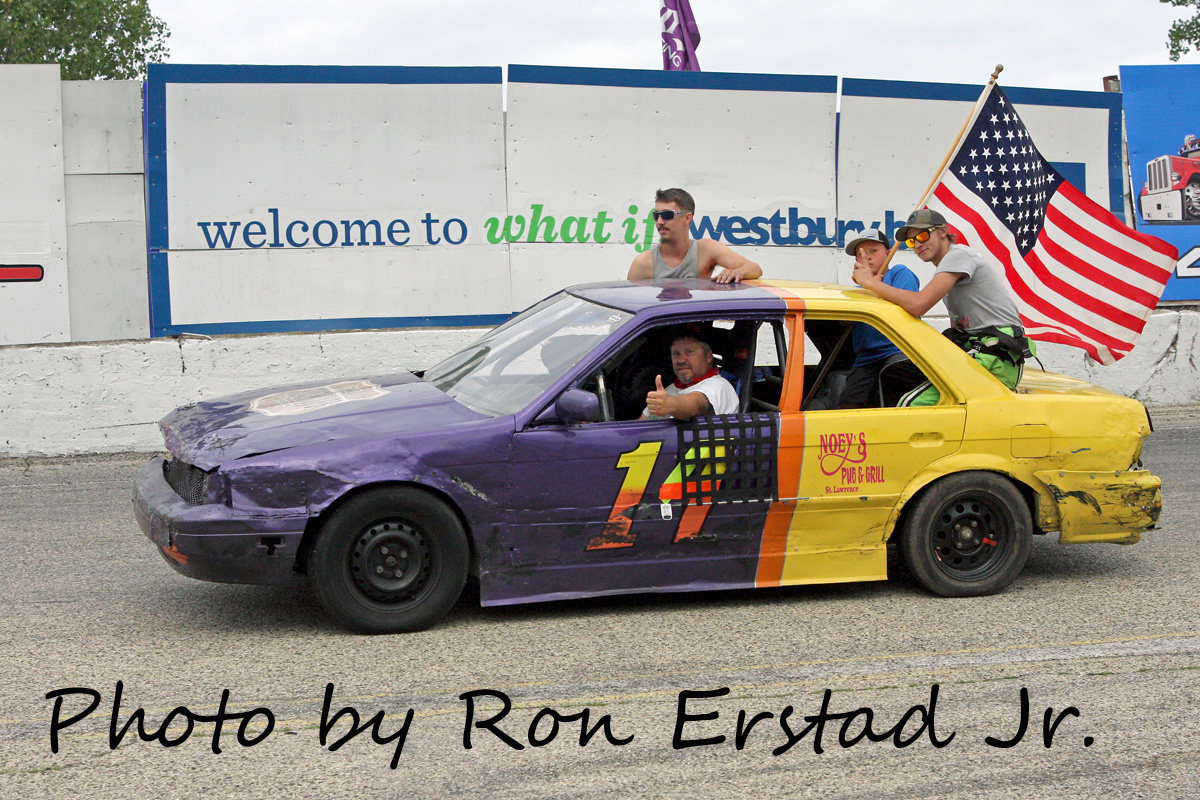 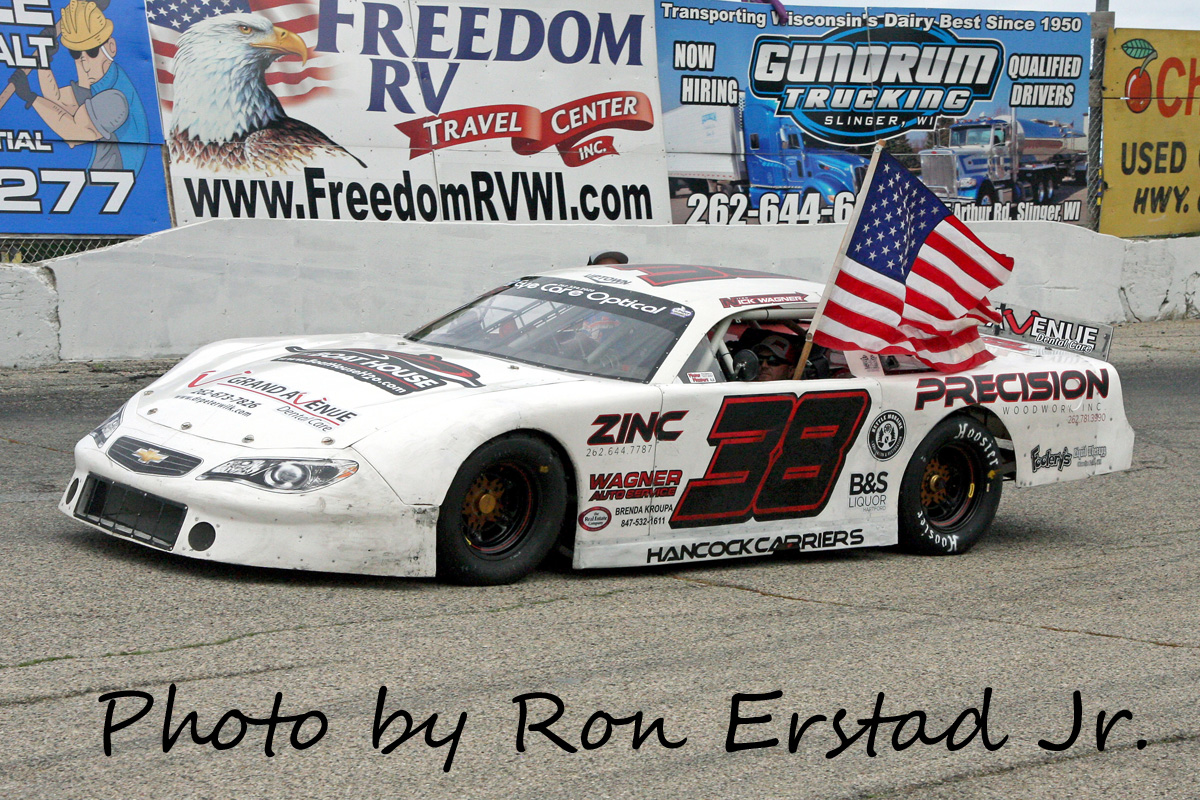 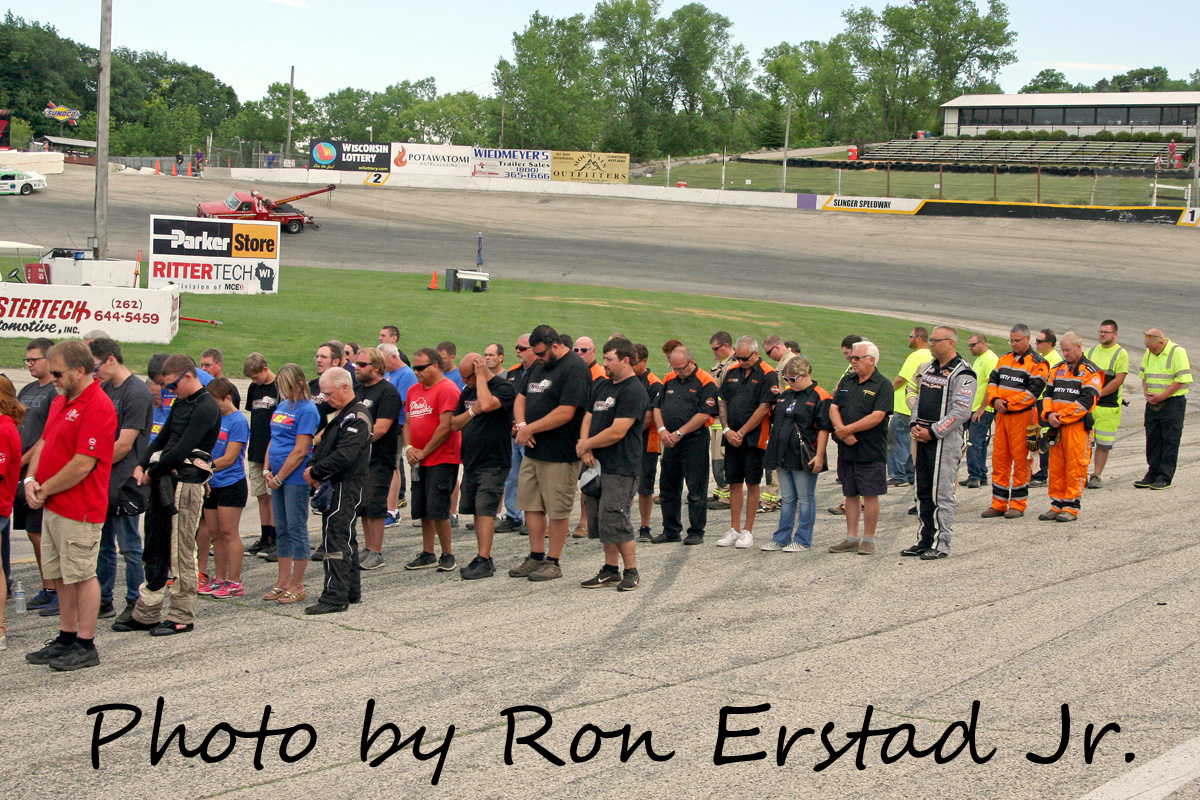