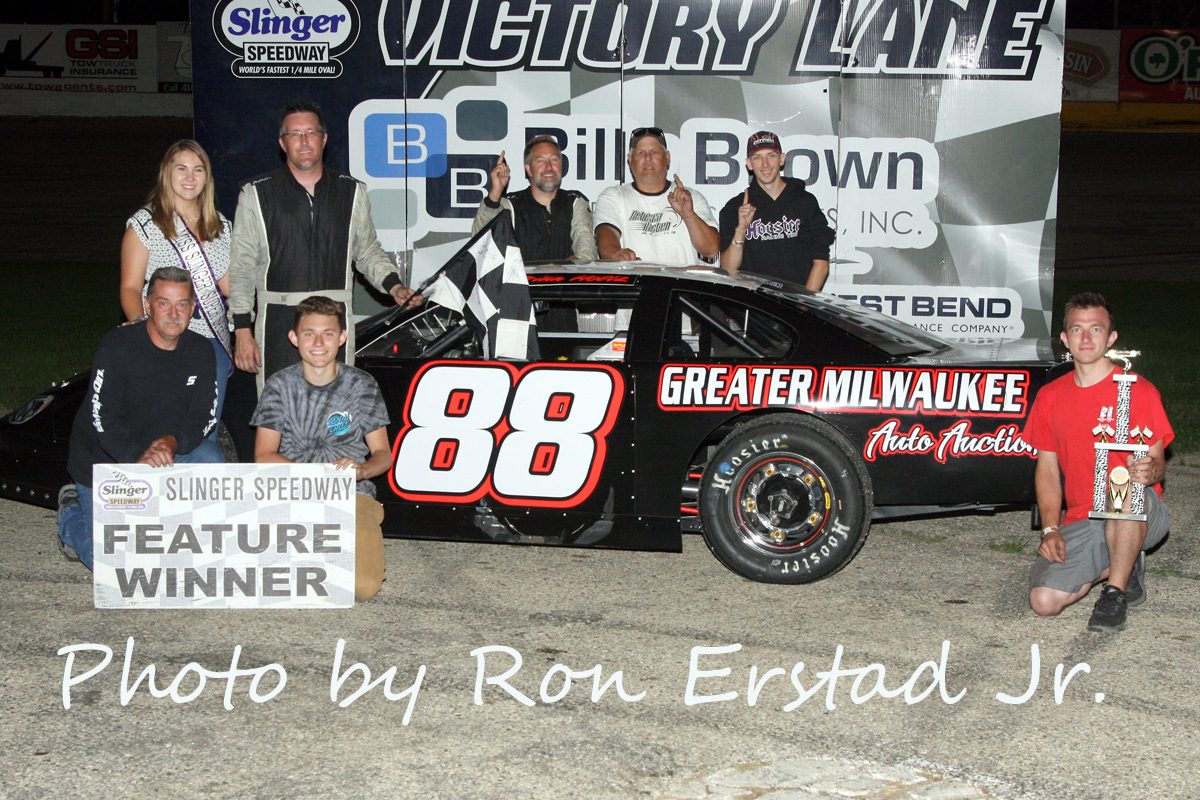 Slinger, Wis., July 7—Jeff Holtz made his first appearance of the season in a late model at the Slinger Super Speedway Sunday night and drove to victory in the 50-lap Prelude to the Nationals main event.

The event got off to a rough start when on the very first lap, a tightly bunched field resulted in the pole-sitter becoming crossed up down the backstretch before spinning back across the track entering turn three. The melee collected numerous cars with Ryan Gutknecht suffering the most damage when his car climbed the turn three wall and struck a billboard before coming to rest on top of the wall. No one was seriously injured in the mishap as the field realigned for a complete restart minus the cars involved.

Jeff Holtz and Jakob Hassler paced the field to the green flag and the two raced side by side for a few laps before Holtz prevailed in the outside groove and took the lead as Hassler slid loose in turn one. Jon Reynolds Jr. and Nick Egan followed in third and fourth respectively while Jack Stern and Jacob Nottestad battled for fifth. The second caution flag waved on lap six when Jerry Eckhardt’s machine looped around off turn four and when racing resumed, Holtz and Hassler renewed their battle for the lead. Holtz held the inside lane while Hassler hung tough on the outside before eventually giving way as slipping to third as Reynolds worked his way around from the inside. Another caution flag appeared on lap 12 as Brad Hetzel’s car spun off the backstretch with Holtz leading over Reynolds, Hassler, and Jacob Nottestad. This time it was Reynolds’ turn to challenge Holtz from the outside and he briefly led a few laps as he raced door to door for the lead while Nottestad moved past Hassler and into third. Reynolds’ race came to an end five laps later when smoke suddenly appeared from the rear of his car and the caution waved as he coasted to a stop on the track. Holtz maintained the lead on the restart over Nottestad and Hassler while Jack Stern and Jesse Bernhagen rounded out the top five positions. Holtz was able to hold Nottestad off while behind the lead duo, Stern and Hassler tangled in turn one on lap 33 with Hassler’s car spinning around to draw the caution flag. During the slowdown, Stern “tapped out” and took the blame for the incident allowing Hassler to maintain his third place position. Once back to green, Holtz again was able to keep his lead over Nottestad while Jesse Bernhagen moved up to challenge Hassler for third. Their dispute over third ended on lap 38 when Hassler’s car spun around in turn one as a result of their hard racing and both went to the rear of the field as the final caution flag of the event was displayed. Holtz was up to the task for the remaining laps and he was unchallenged as he drove to the victory while Nottestad finished a strong second. Jerry Mueller capped off a strong run with a third place finish while Brent Edmunds made his first appearance of the season worthwhile with a fourth place result. Zach Braun turned in his best career finish in fifth just ahead of Jack Stern in sixth and Ryan Craine in seventh. Jason Stark, Tom Jasinski, and Jakob Hassler rounded out the top ten finishers.

The pavement modifieds made their return to the Slinger high banks for the first time in ten years and Steven Schulz was the winner of the 20-lap feature. Braison Bennett finished second ahead of Bill Prietzel and Justin Okruhlica in third and fourth respectively. Dan Church finished fifth. Cole Howard won the modified heat race and Steven Schulz was the fastest qualifier. 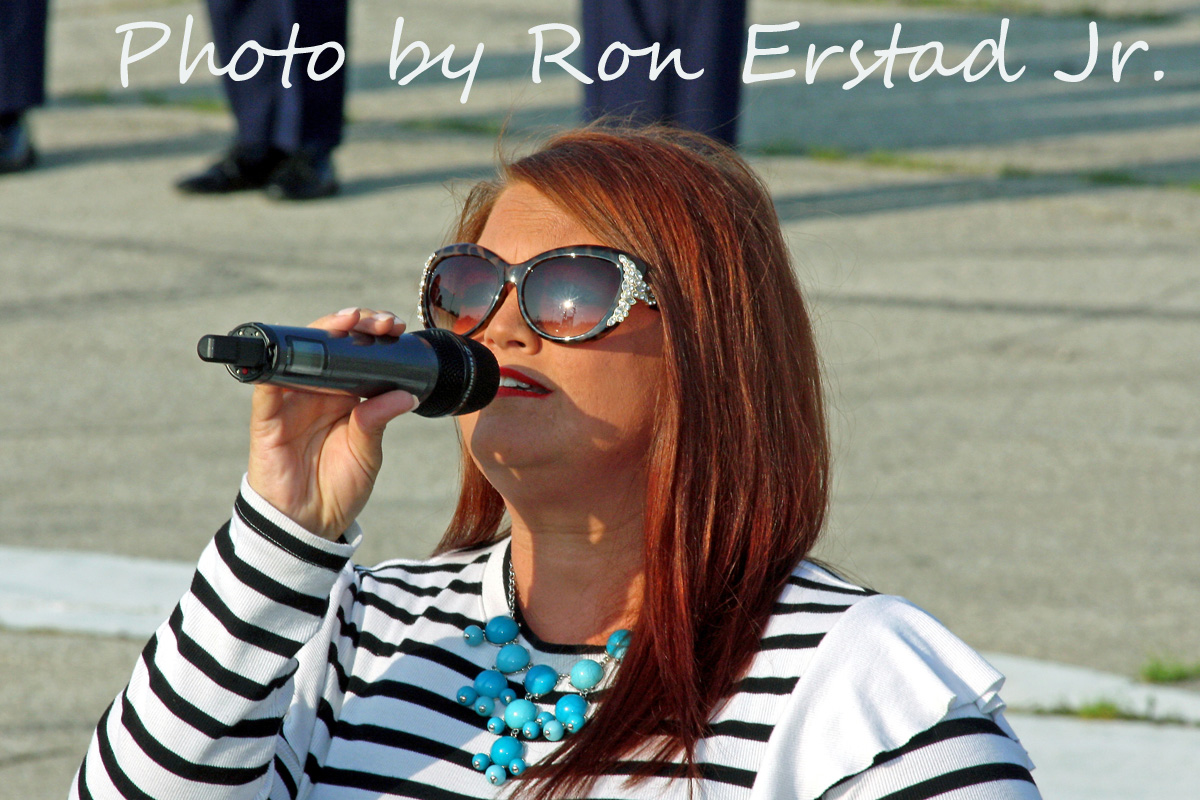 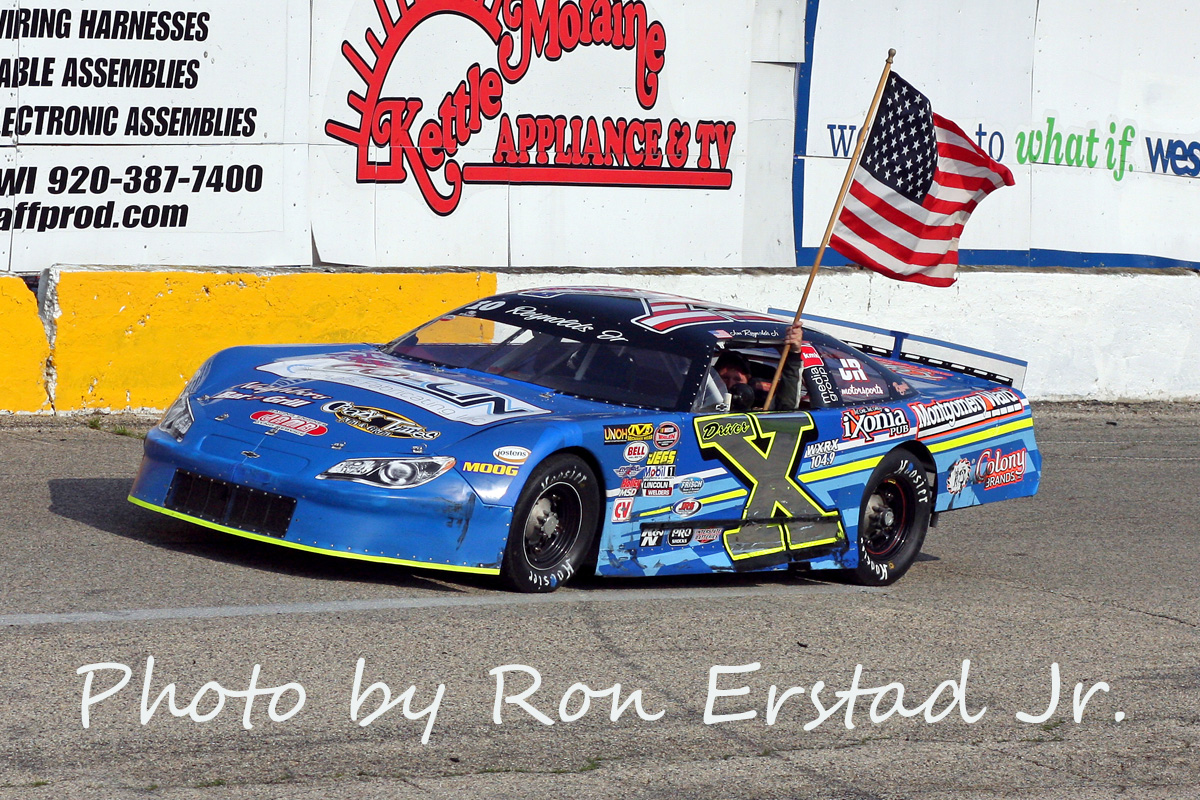 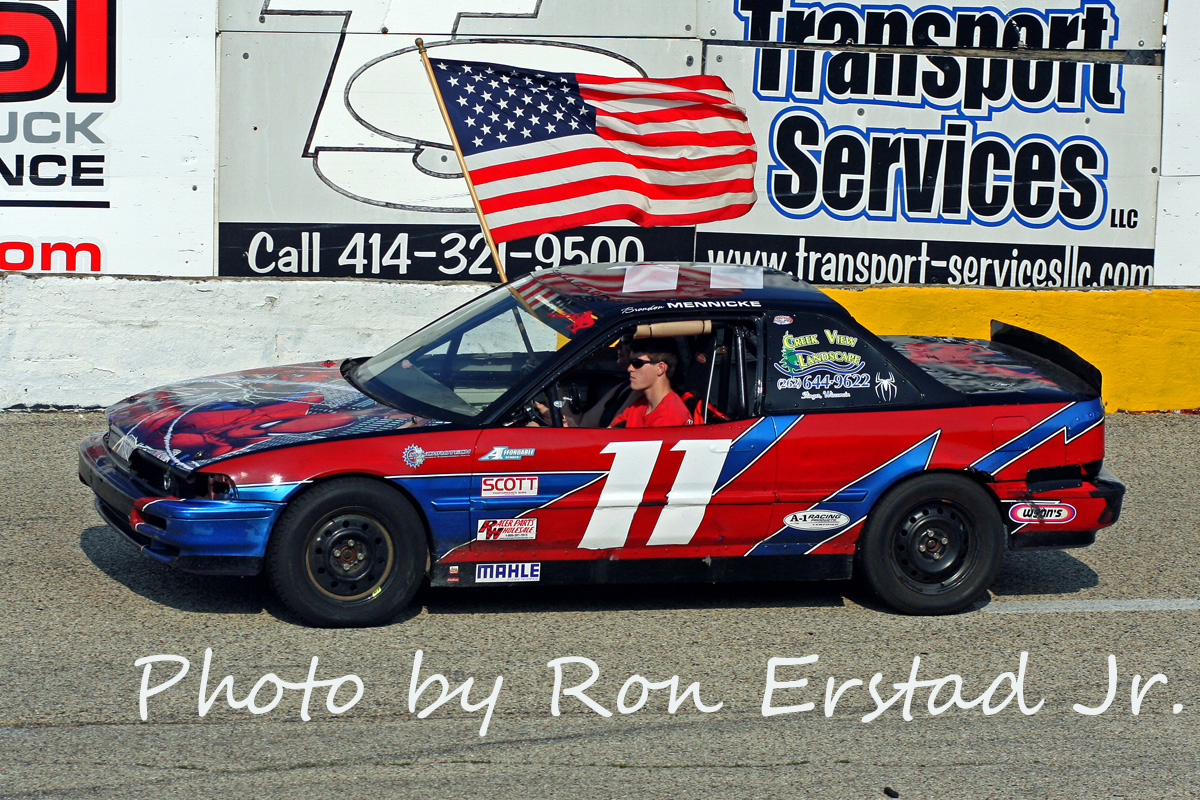 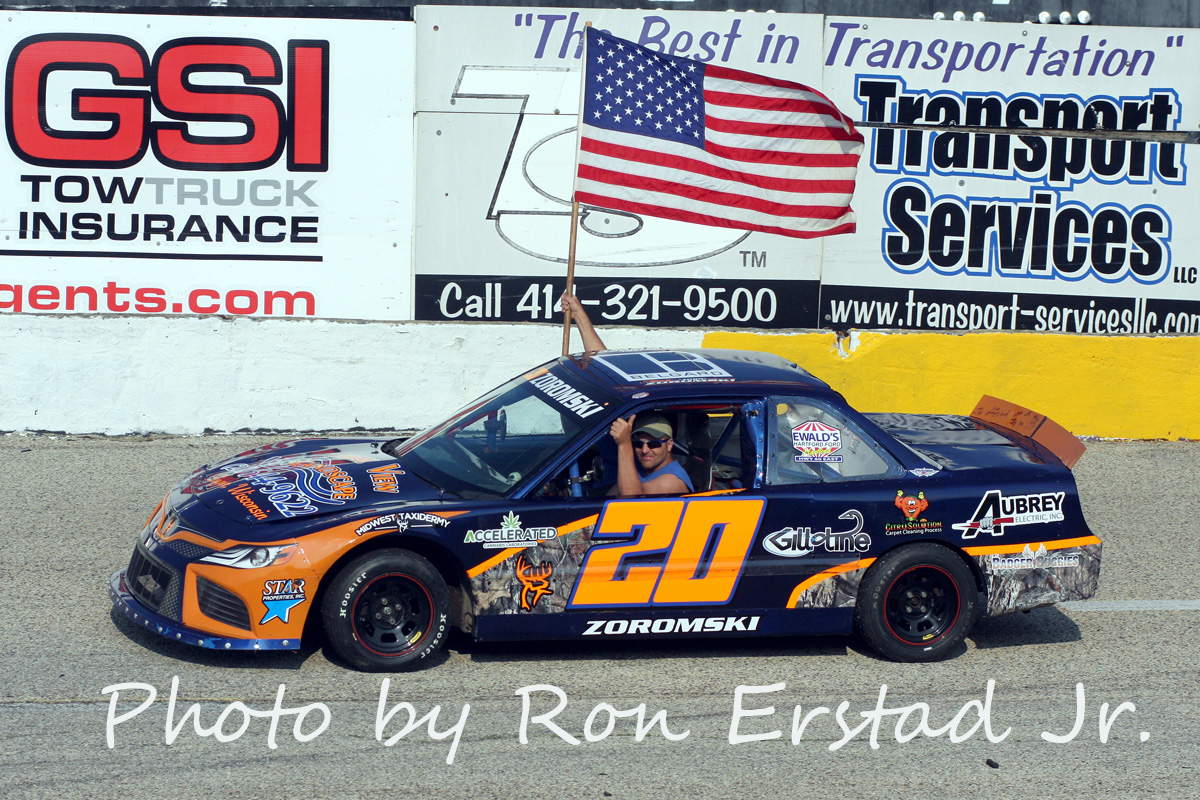 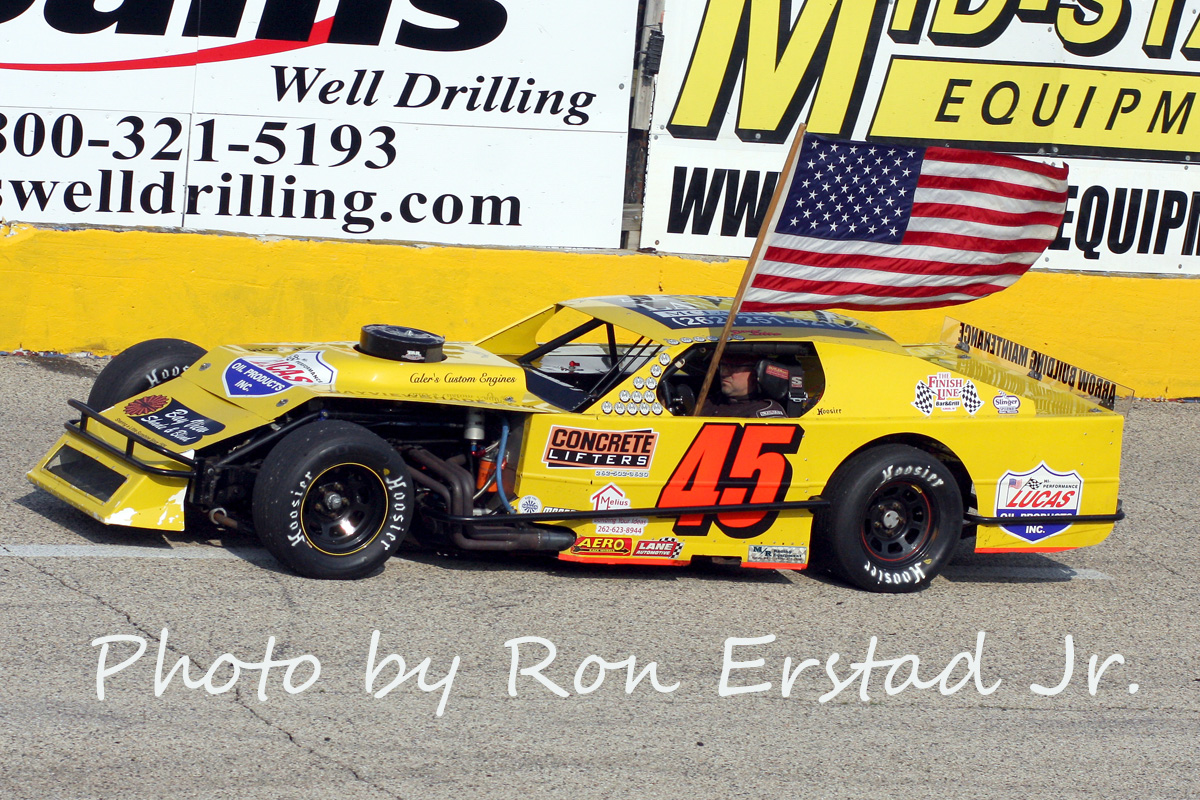 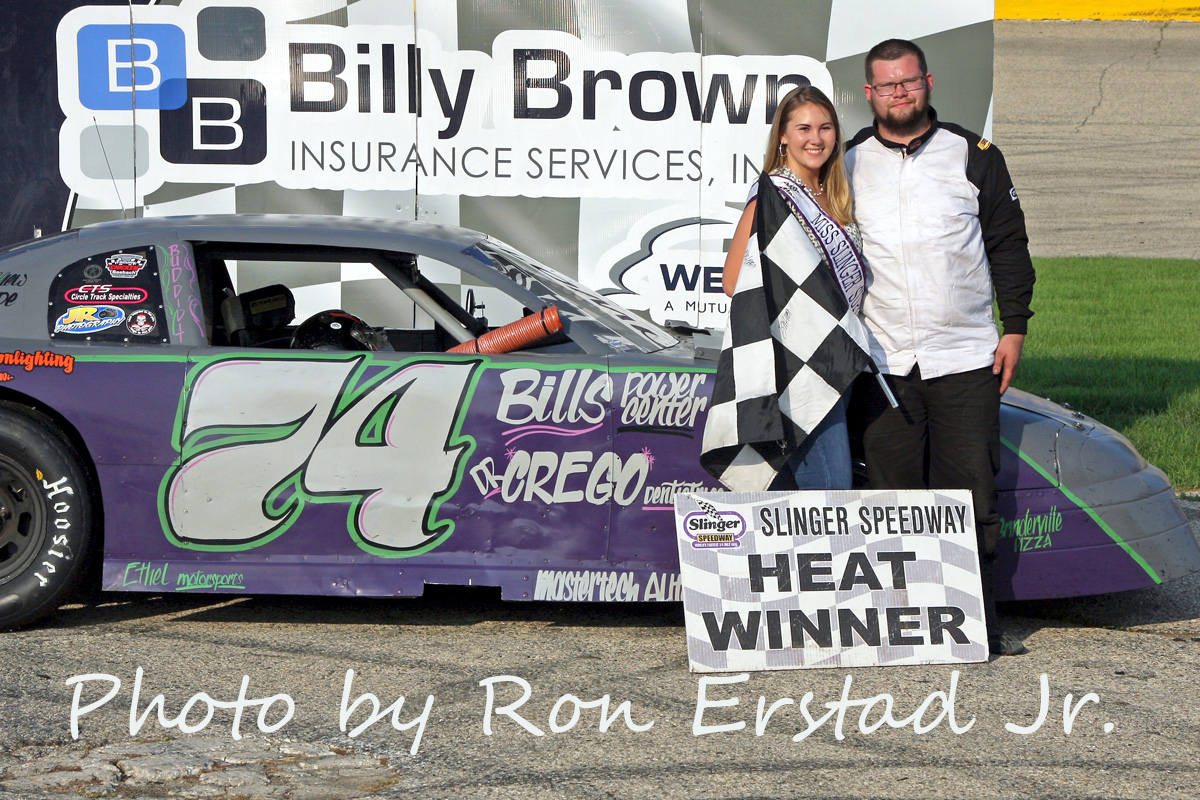 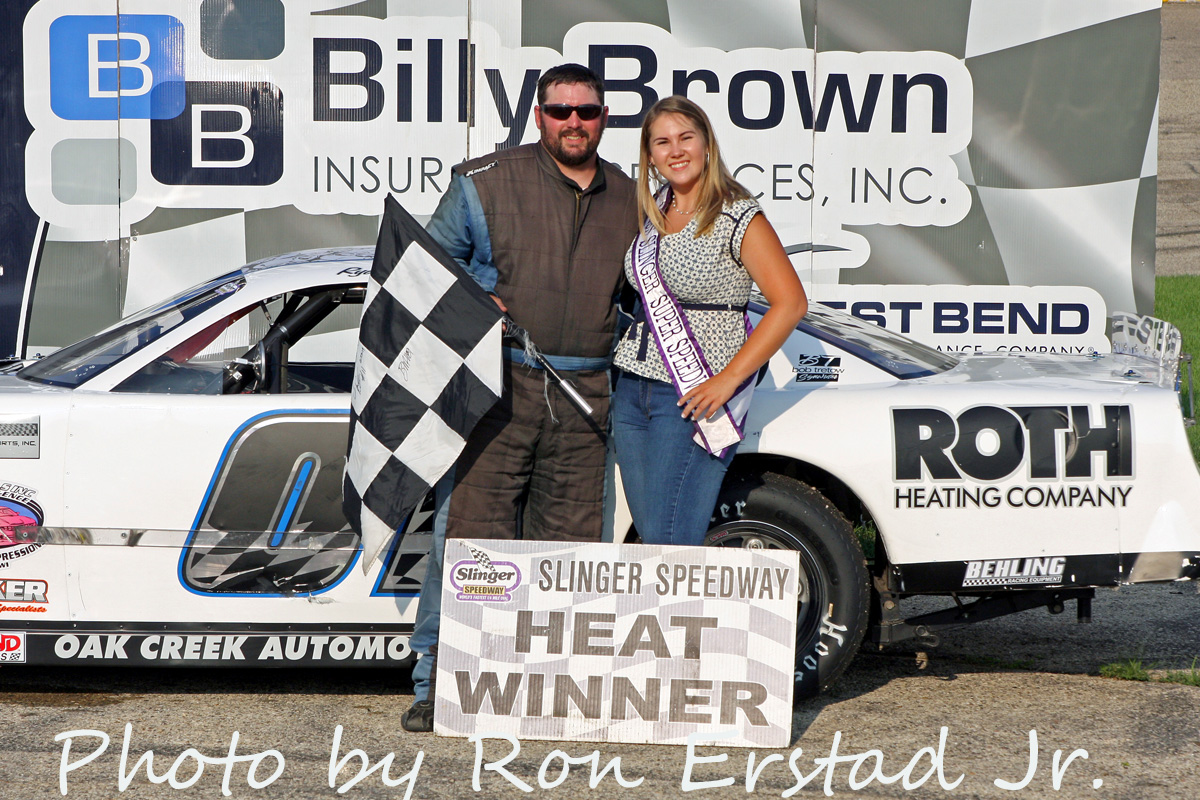 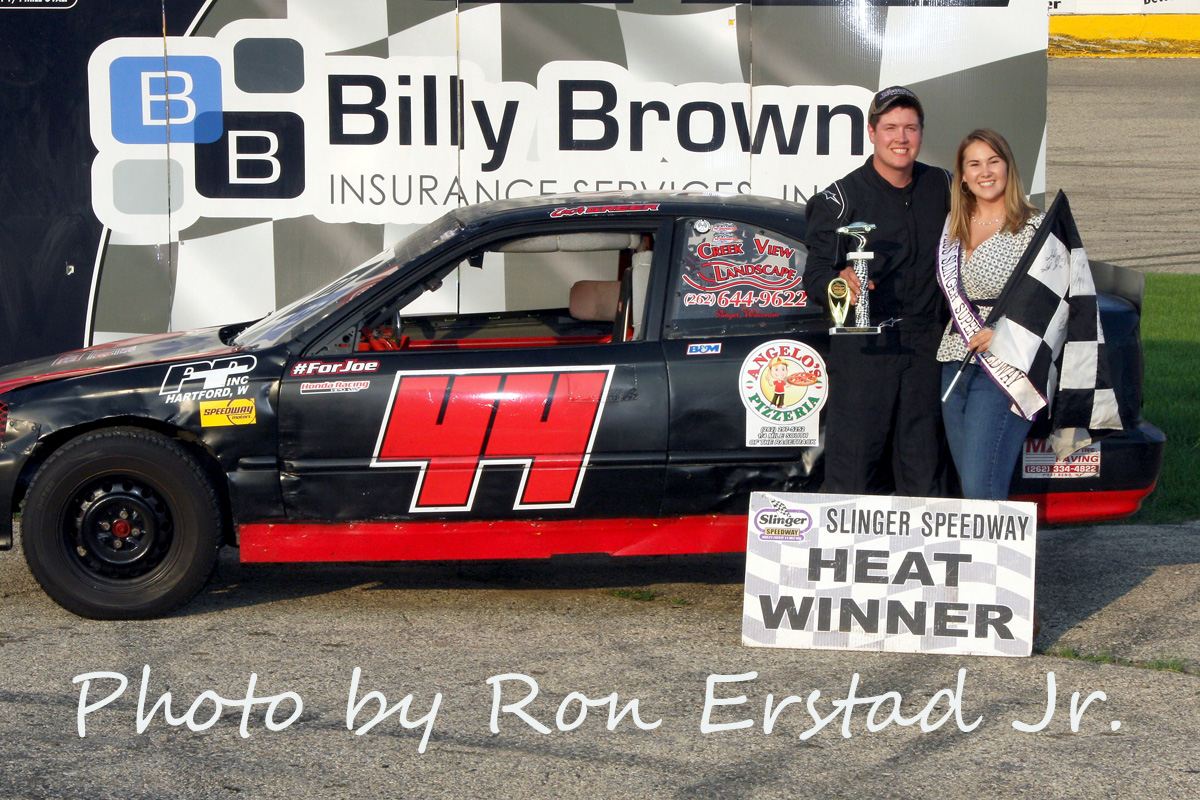 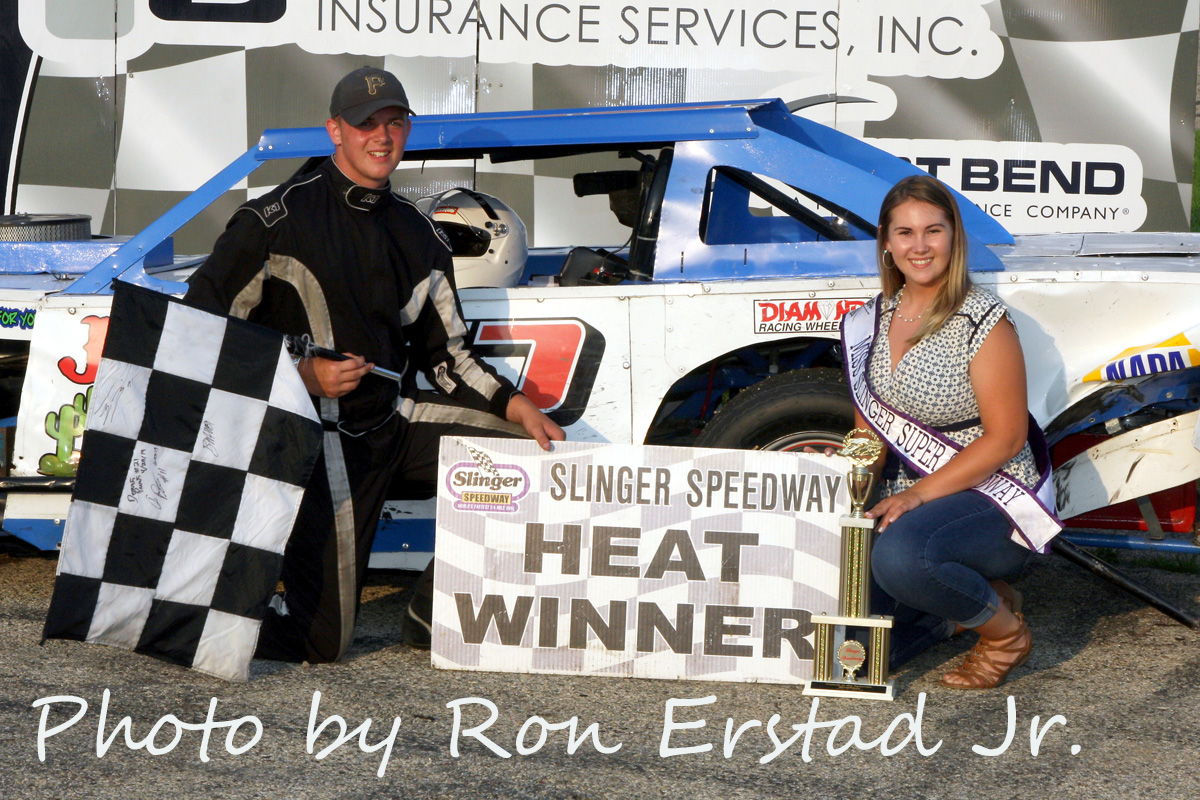 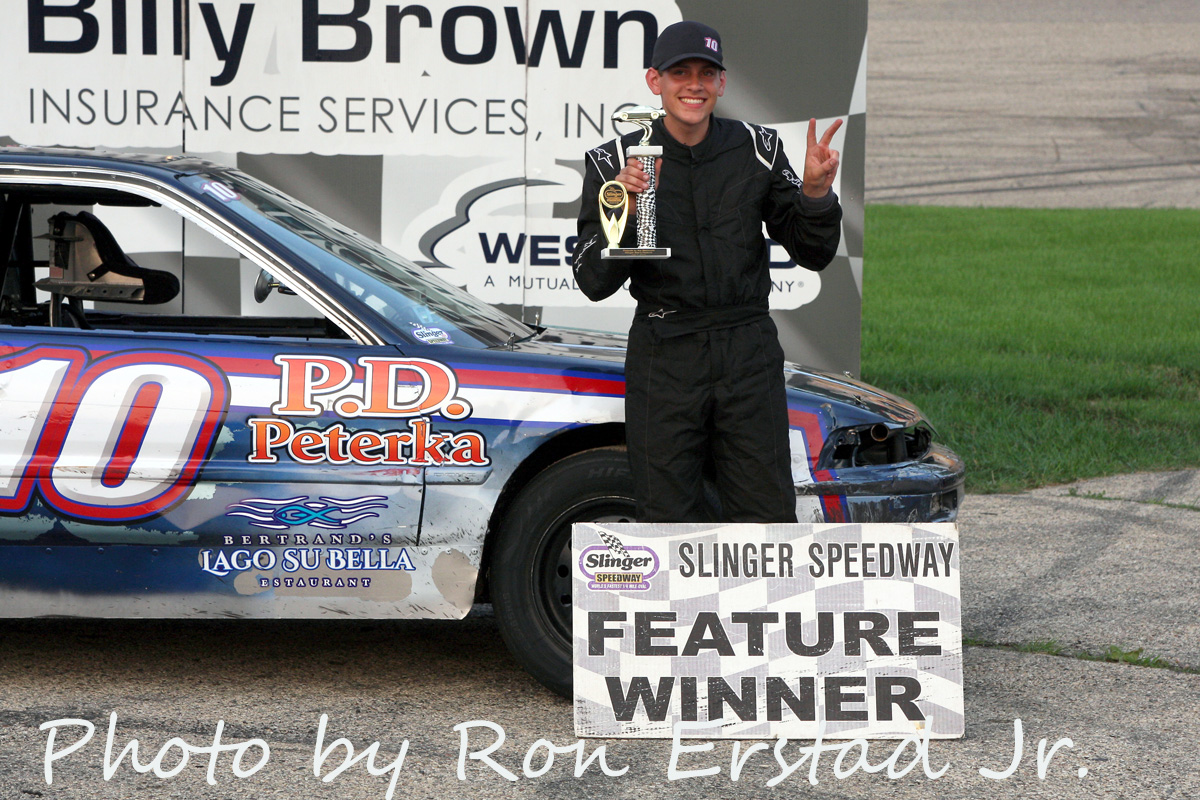 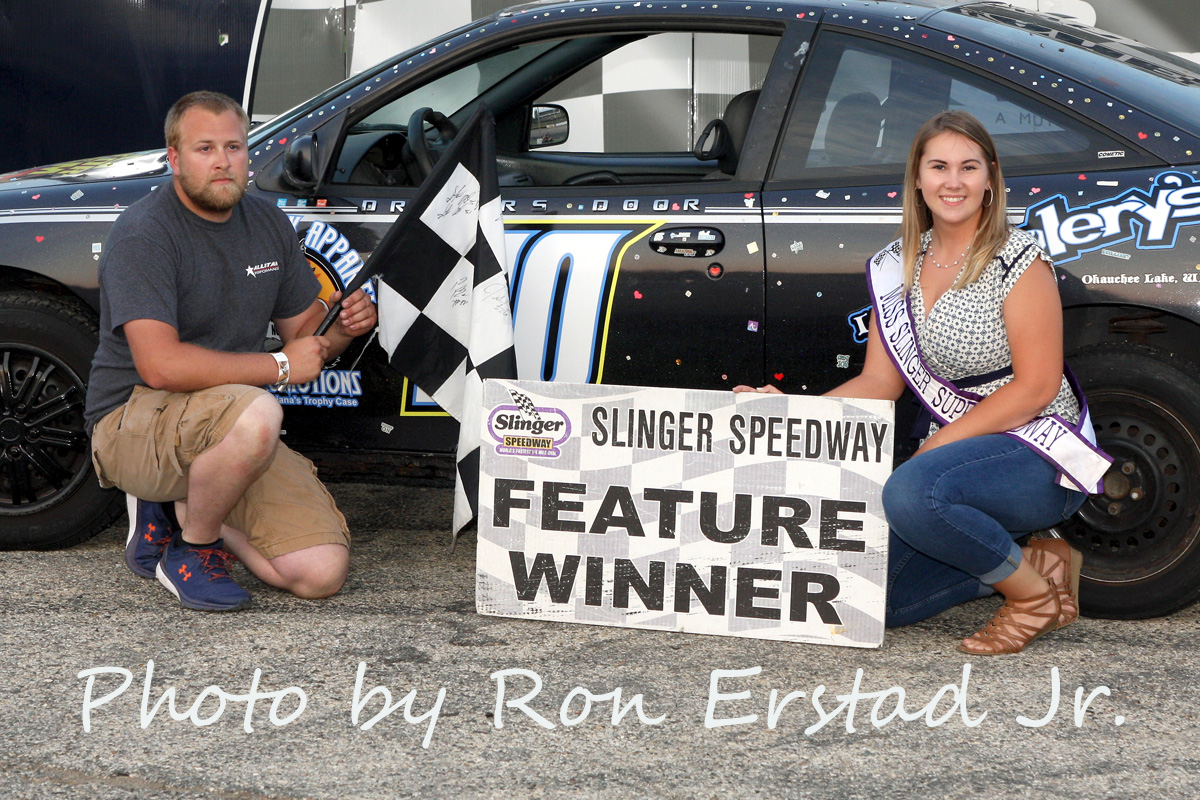 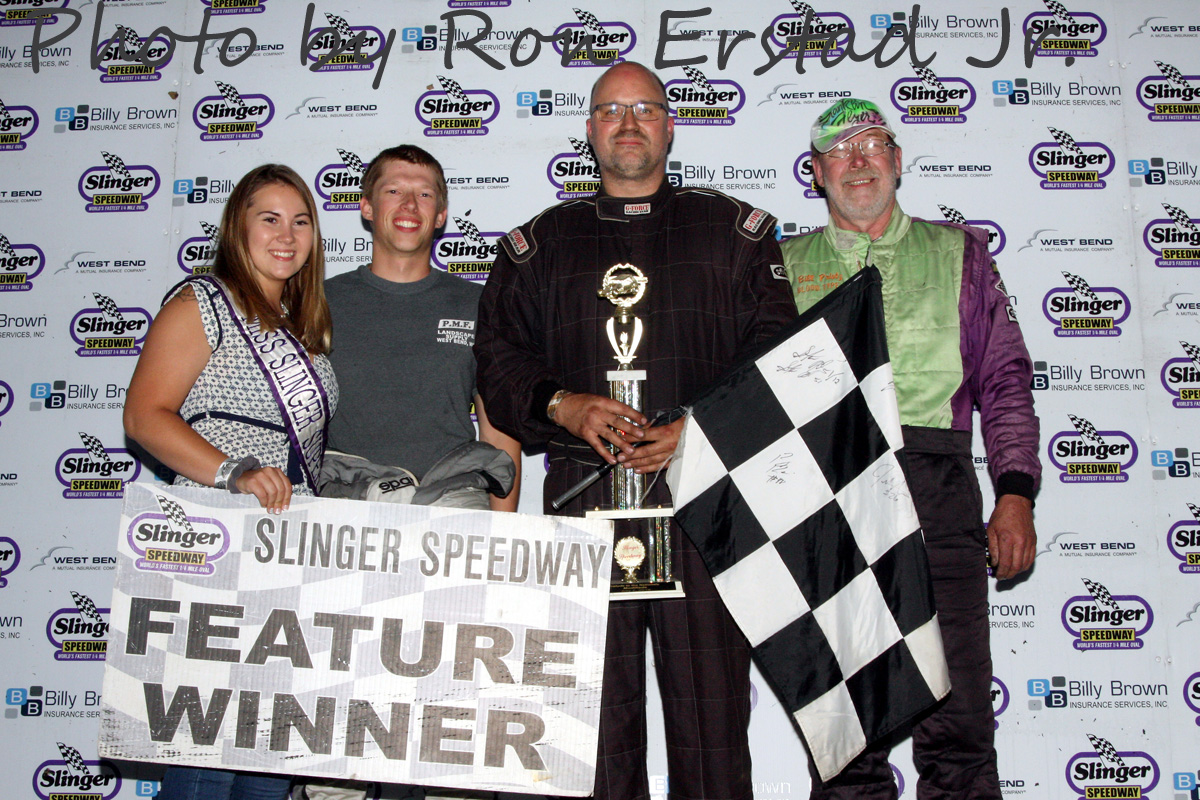 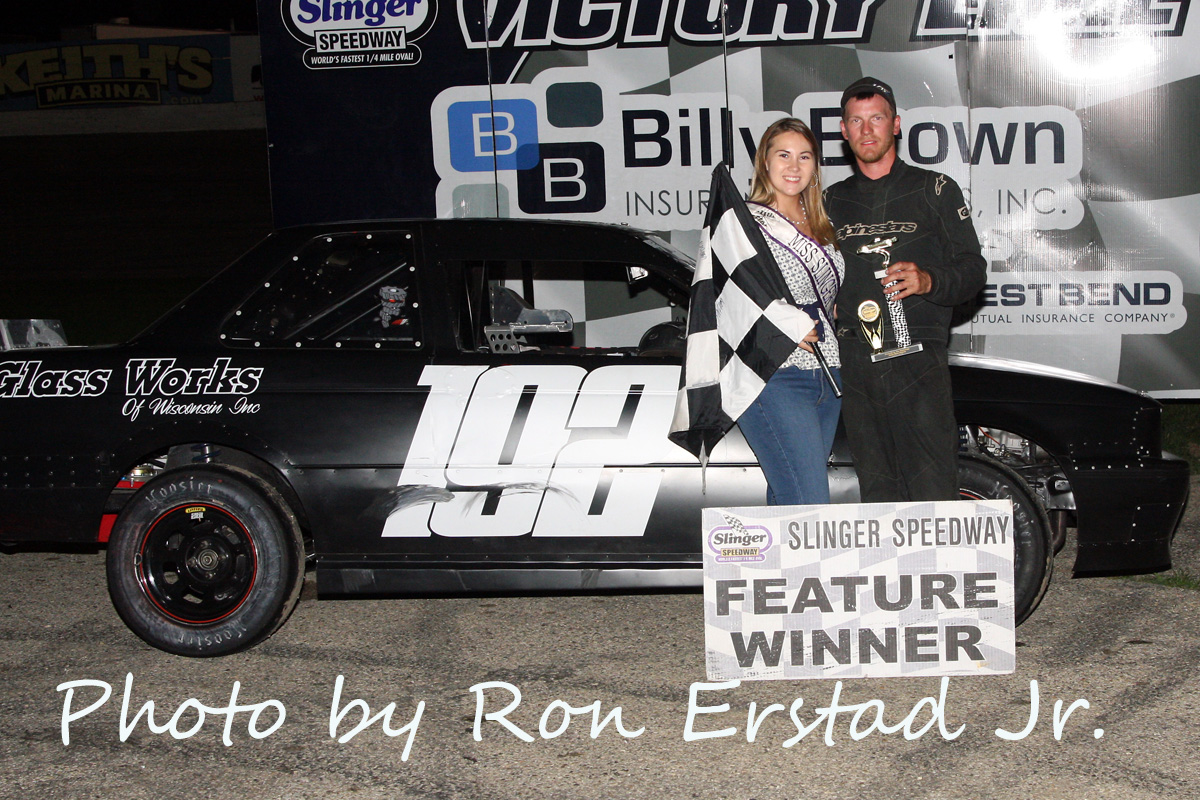 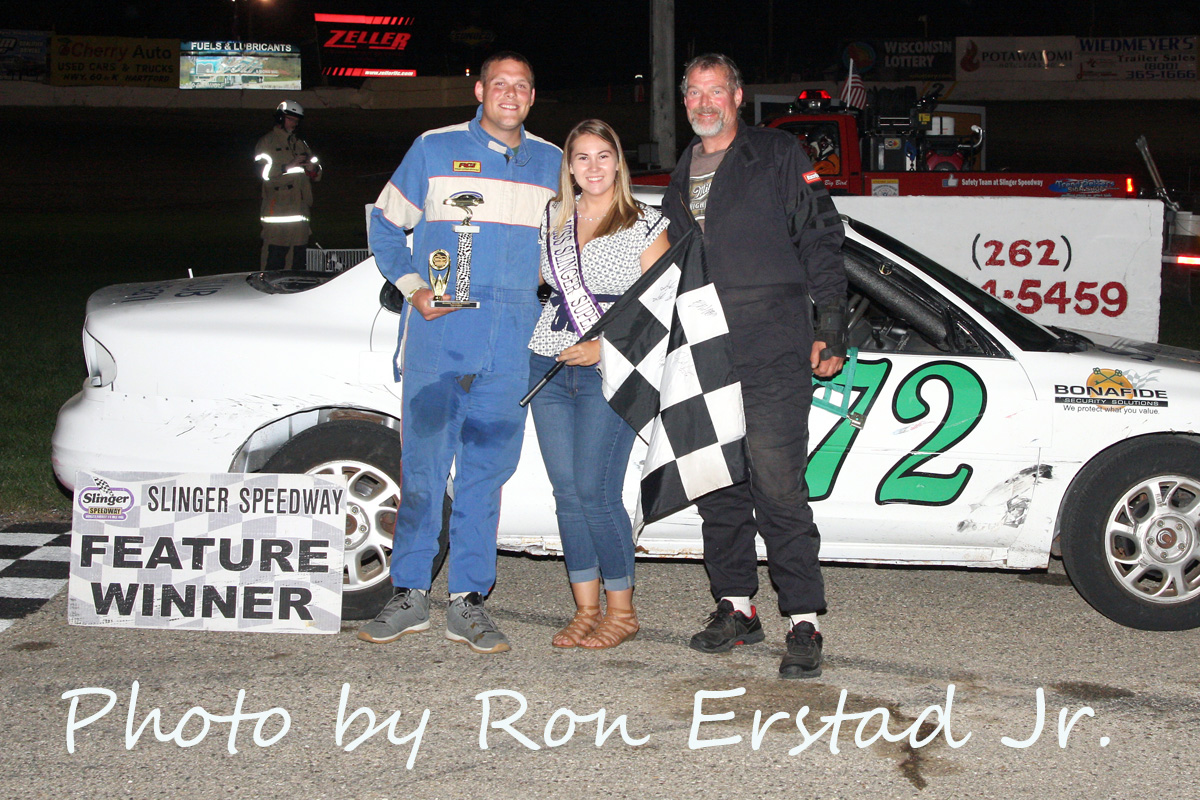 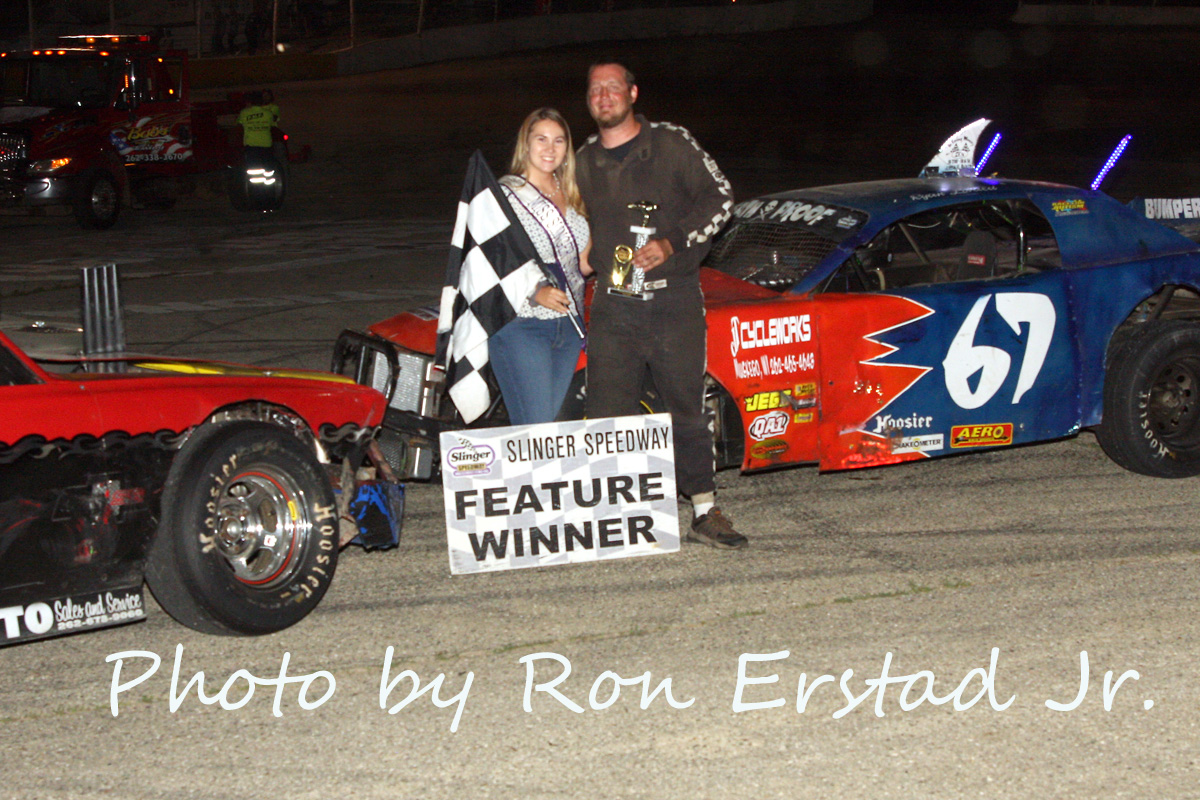