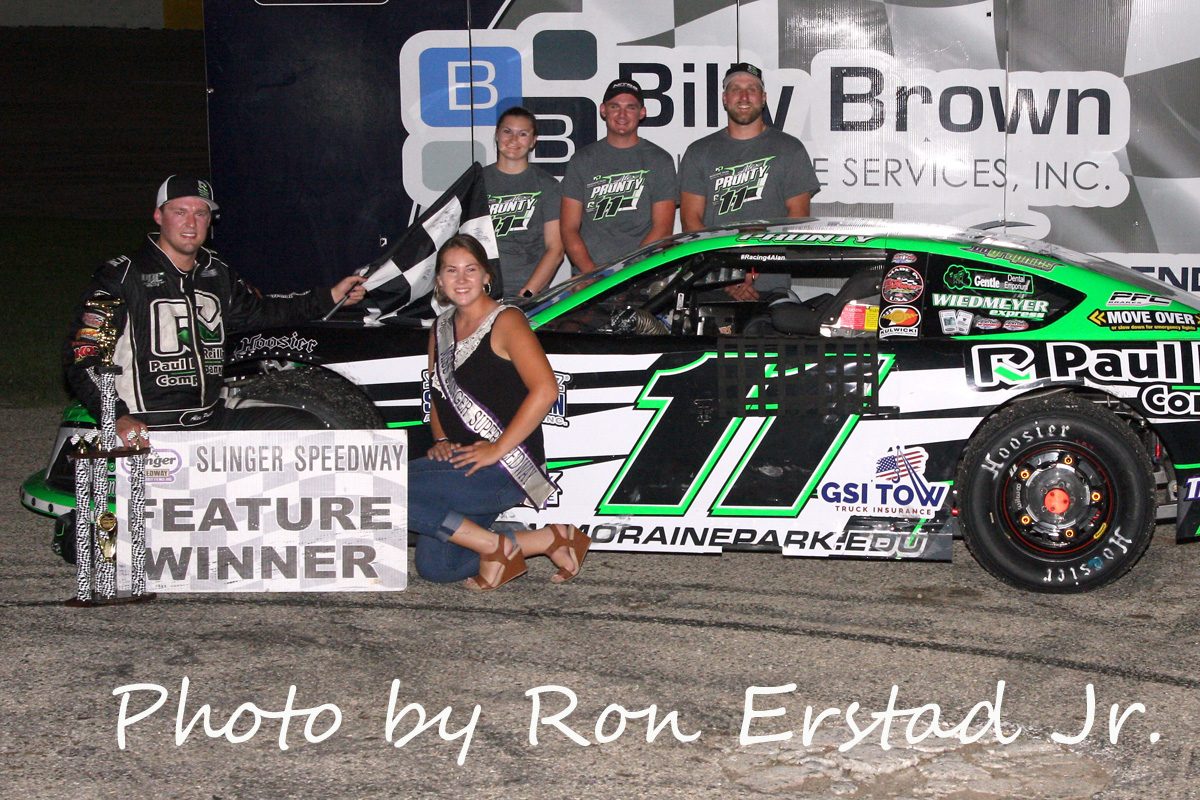 Slinger, Wis., July 28—Alex Prunty wasted no time on his trek to victory in the South Eastern Wisconsin Short Track Hall of Fame Tribute 75 Sunday night at the Slinger Super Speedway as he captured his third super late model feature win of the season.

Seemingly mired in third place behind Brad Mueller and Chris Blawat in the in the waning laps, Prunty decided it was time to go and muscled his way around Blawat for second place. Fourth running Conrad Morgan took advantage of the opening created when Blawat’s car skated up the track and moved into third place while Prunty began to track down Mueller for the lead. Mueller’s car began to fade near the end of the race while Prunty’s was moving forward and within several laps, Prunty was able to move into the lead. Morgan also worked his way around Mueller for second but Prunty proved to be too much to handle and he drove to the victory. Morgan’s second place finish was his best result of the season and the 71-year-old veteran joked afterwards the he’s probably “good for another ten years” behind the wheel. Blawat rebounded from the earlier contact to finish a strong third, which was a welcome result just two week back from rebuilding his car from an early season crash. Brad Mueller led a majority of the race and finished fourth while Brad Keith took the checkered flag in fifth. R.J. Braun completed another strong run with a sixth place finish ahead of Steve Apel, who drove back through the field after being involved in the event’s only caution period to finish seventh. Grant Griesbach, Nick Wagner, and Tim Lampman rounded out the top ten finishers.

The only caution flag of the event waved on lap 26 when Ryan DeStefano’s car broke loose entering turn one while racing for fifth place with Steve Apel. DeStefano’s car ricocheted off Apel’s side panel and made a hard right turn into the wall just off turn two before coming to rest on the backstretch where it was struck by the sliding car of Dave McCardle who was attempting to avoid DeStefano’s stopped car. Both drivers emerged from the incident uninjured but both cars were severely damaged and were unable to continue.

Earlier in the evening, Ryan DeStefano won the super late model fast dash and Brad Keith turned in the fastest lap in qualifying at 11.253 seconds.
Jack Stern drove to a convincing win in the 40-lap late model main event, leading every lap en route to the victory. The victory also gave Stern the lead in the battle for the late model season championship as Jacob Nottestad, the other driver involved in the tight points chase, finished laps down after experiencing a flat tire during the race. Tom Berens drove his best late model race to date to finish second ahead of Ryan Craine who also turned in an impressive performance by finishing third. Ryan Gutknecht, who continues to sort out a new car, finished a respectable fourth and E.J. Waldron made a return visit to Slinger and finished fifth. Brian Holtz finished sixth and Jerry Mueller took the checkered flag in seventh. Sportsman driver Jake Schraufnagel gave the late models a try and drove the #16 car to an eighth place finish ahead of Brent Edmunds and Tyler Hromadka in ninth and tenth respectively. Jacob Nottestad was the fastest qualifier after turning in a lap at 12.081 seconds.

Jake Schraufnagel climbed back aboard his sportsman car and promptly won the 30-lap feature holding off Jay Kalbus and Andrew Meyerhofer in the process. Jimmie Evans finished in the fourth spot and Paul Wagner was fifth. Dale Lecus Jr. finished sixth just ahead of Adam Bleskan and Randy Ruth while Natalie Haver and Tom Elsinger rounded out the top ten. Jay Kalbus was the fastest qualifier.

Carl Benn won the 25-lap Slinger Bees feature over Matt Urban. Keegan Bush led the most laps in the race and ended up tangling with Evan Hassler on the final lap while battling for third. Hassler, who spun in the incident, was awarded the third position per track rules governing situations where a driver is spun on the final lap. Zach Greer finished fourth and Brian Stanczyk was fifth. Marty Tackes was the fastest qualifier with a lap at 15.267 seconds.

Austin Jahr won a wild 25-lap Legends feature which featured the lead cars being involved in incidents twice. Jahr was involved in the first one and drove from the rear of the field to capture the victory. Frank Beutel finished second and James Lynch was third. Ryan Braseth and Alex Braseth completed the top five finishers. Will McCully and Hans Roeschli were the winners of the Legends heat races and Aaron Moyer was the fastest qualifier at 13.329 seconds.

Rahn Sewell won the Bar Car race driving for the Finish Line tavern and Scott Goetzke was the winner of the Figure 8 race to close out the evening. 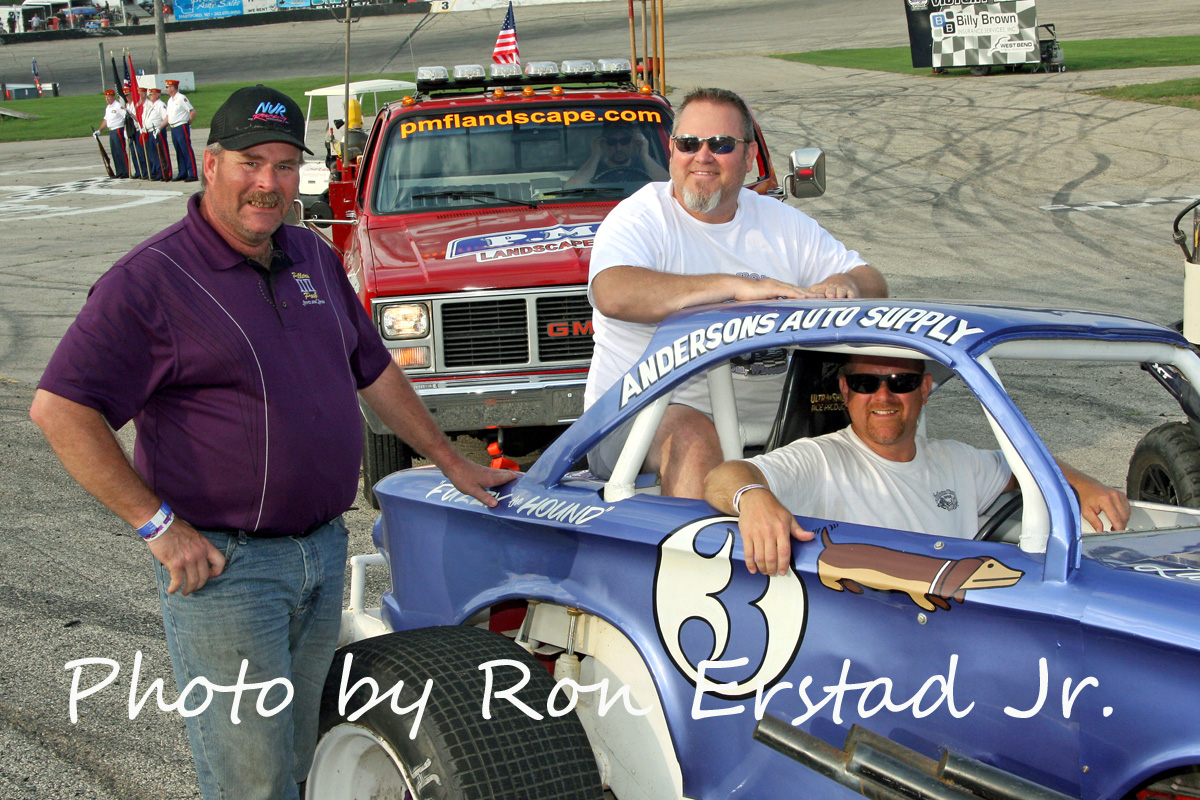 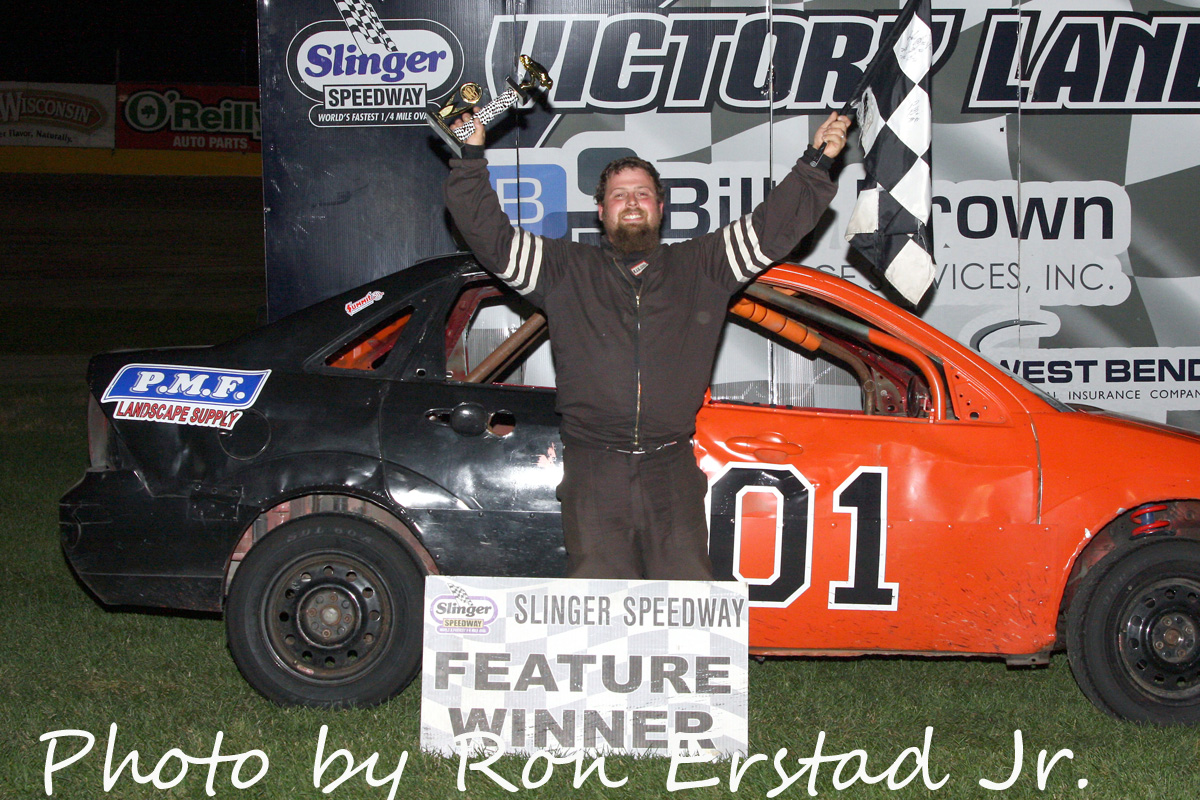 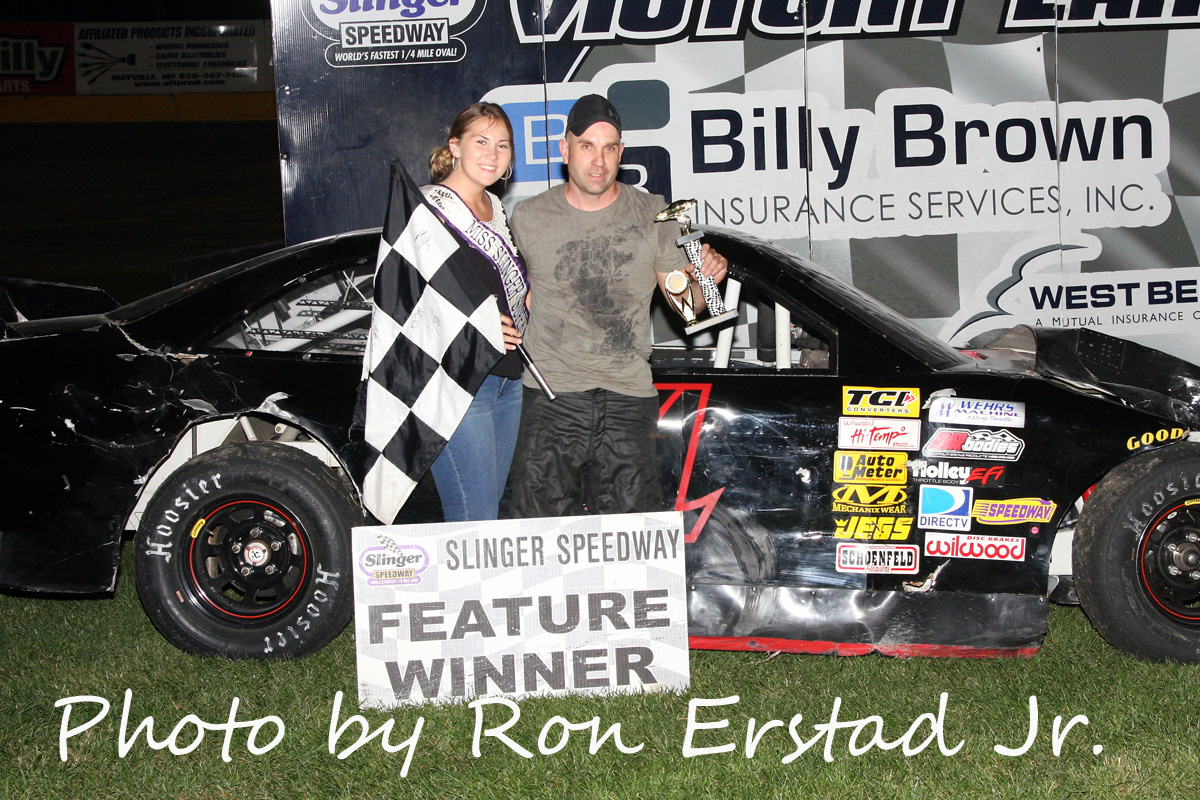 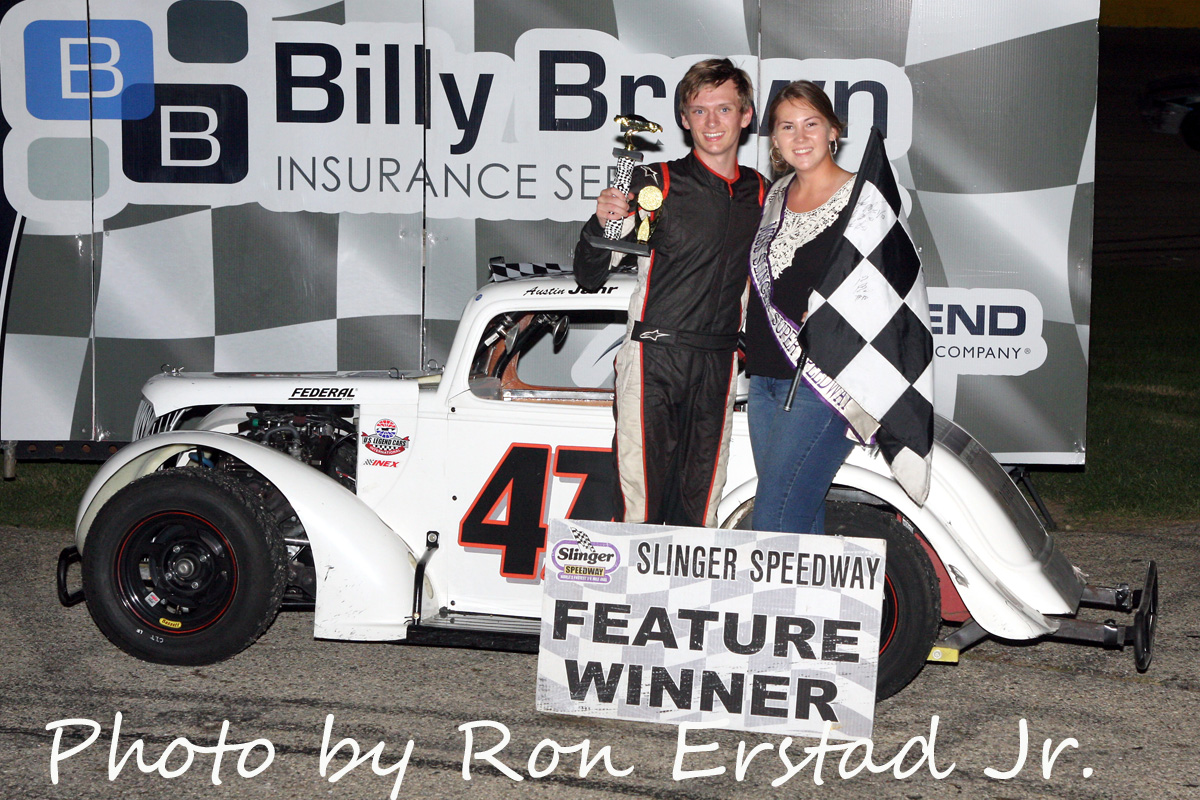 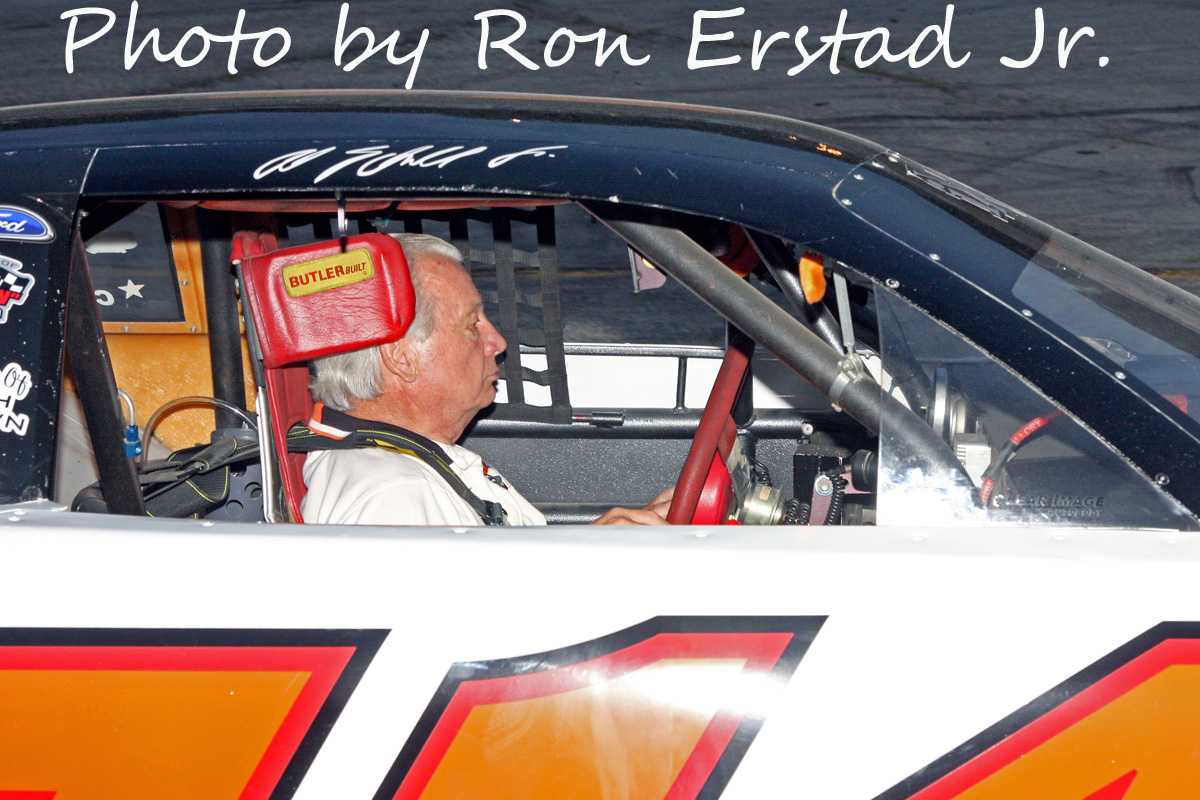 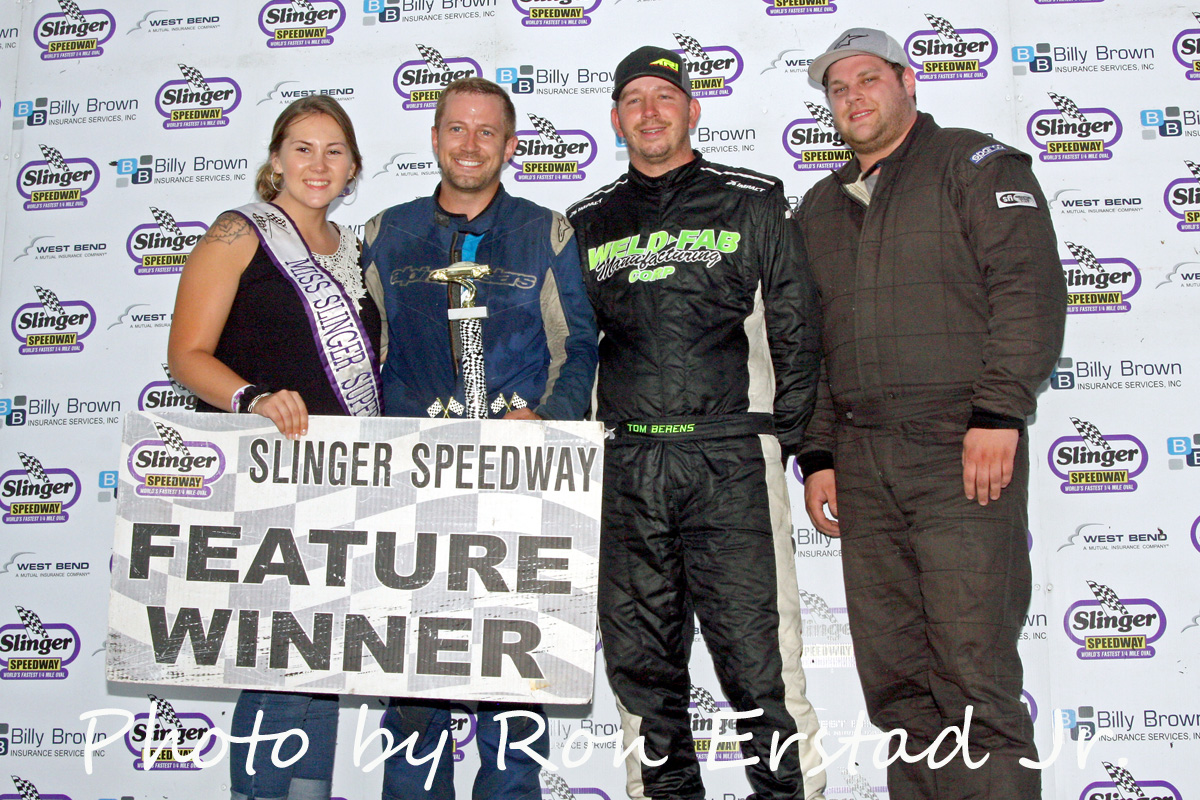 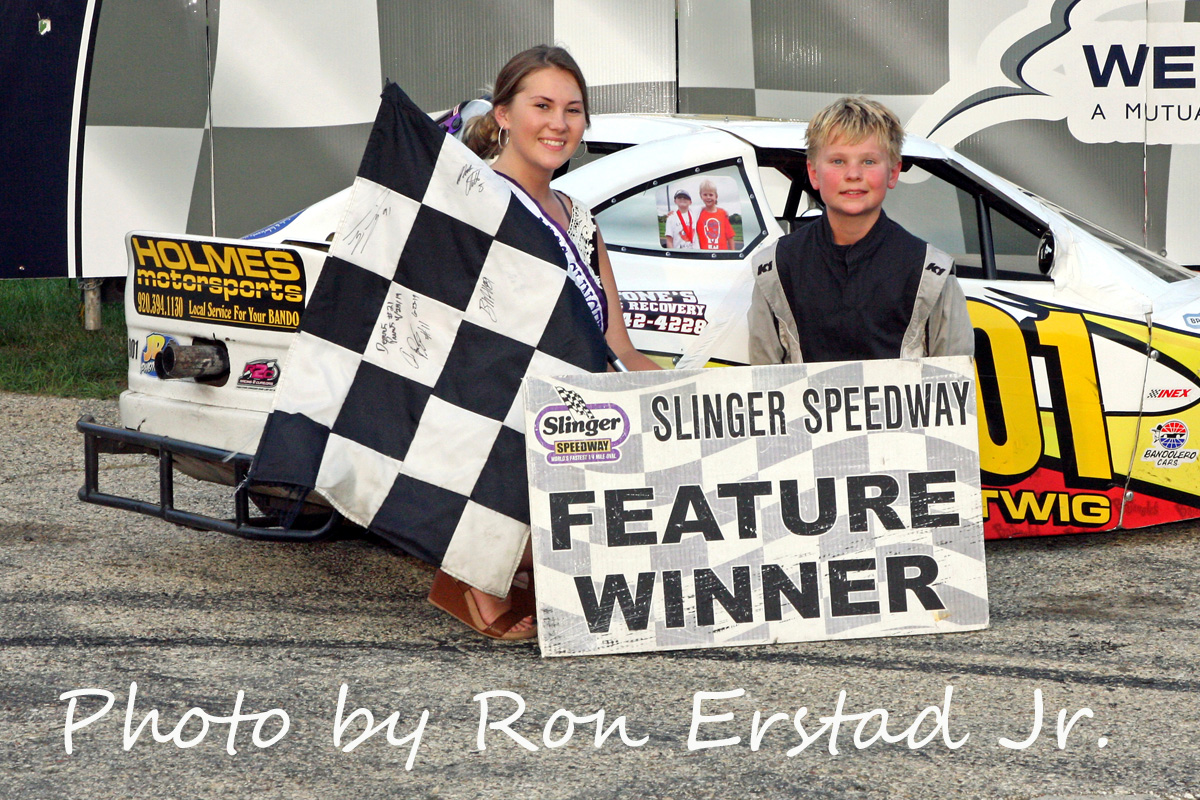 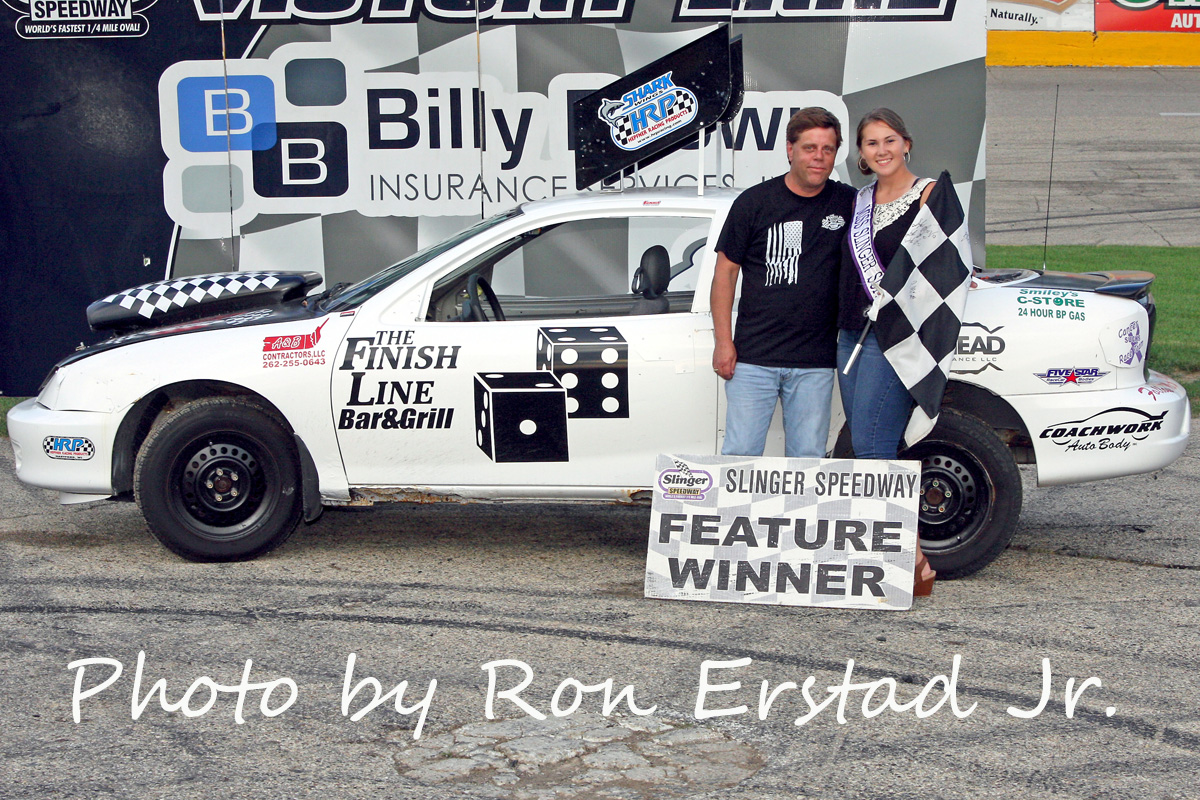 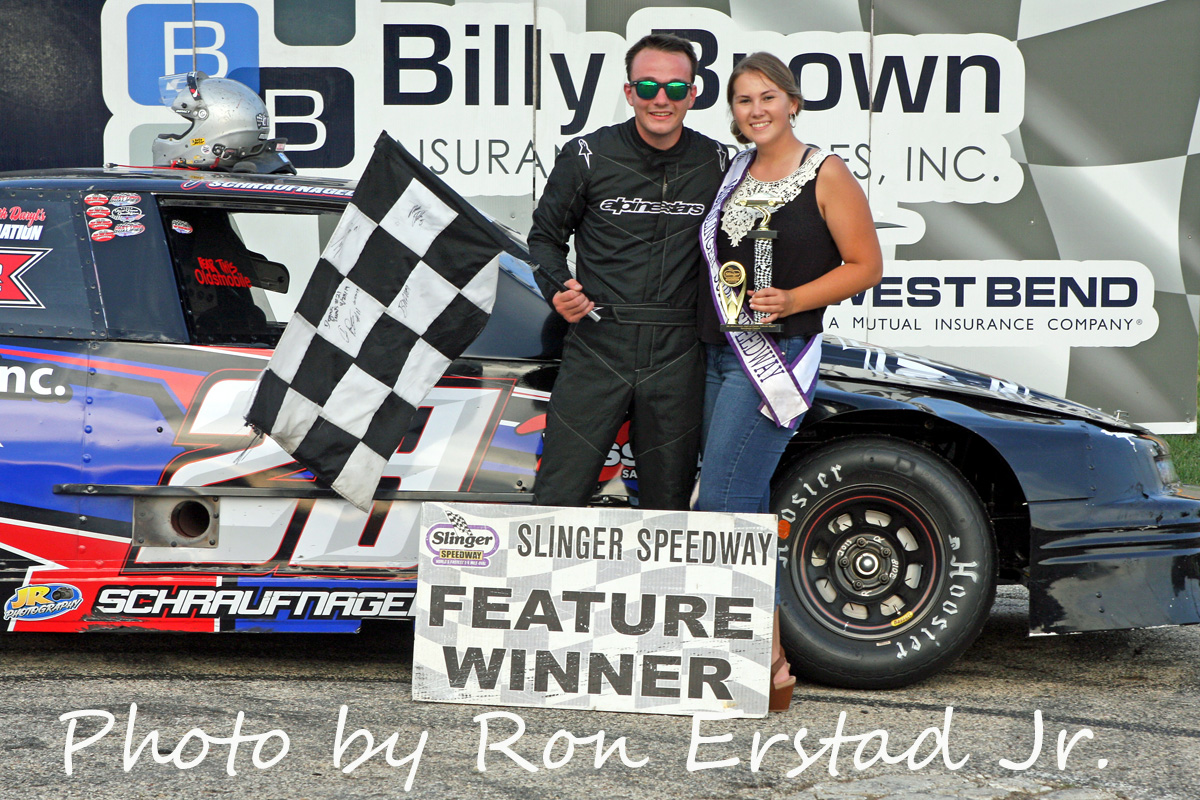 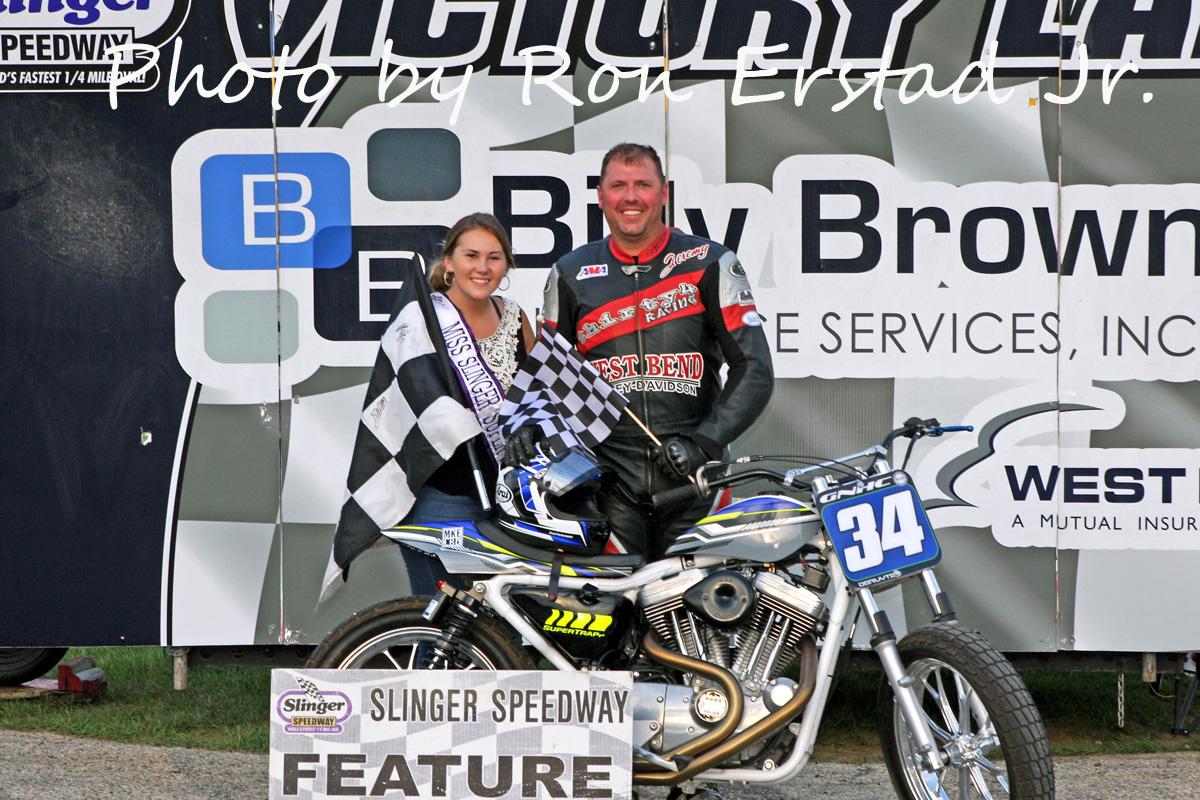 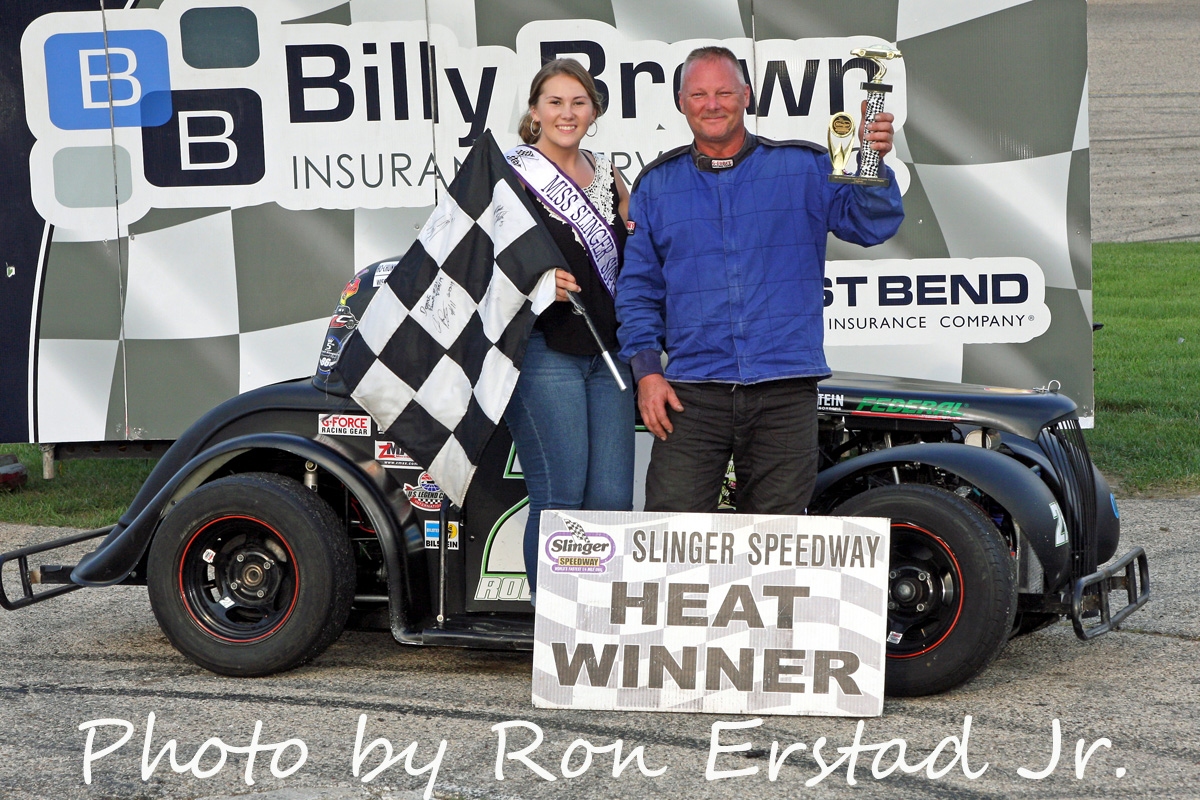 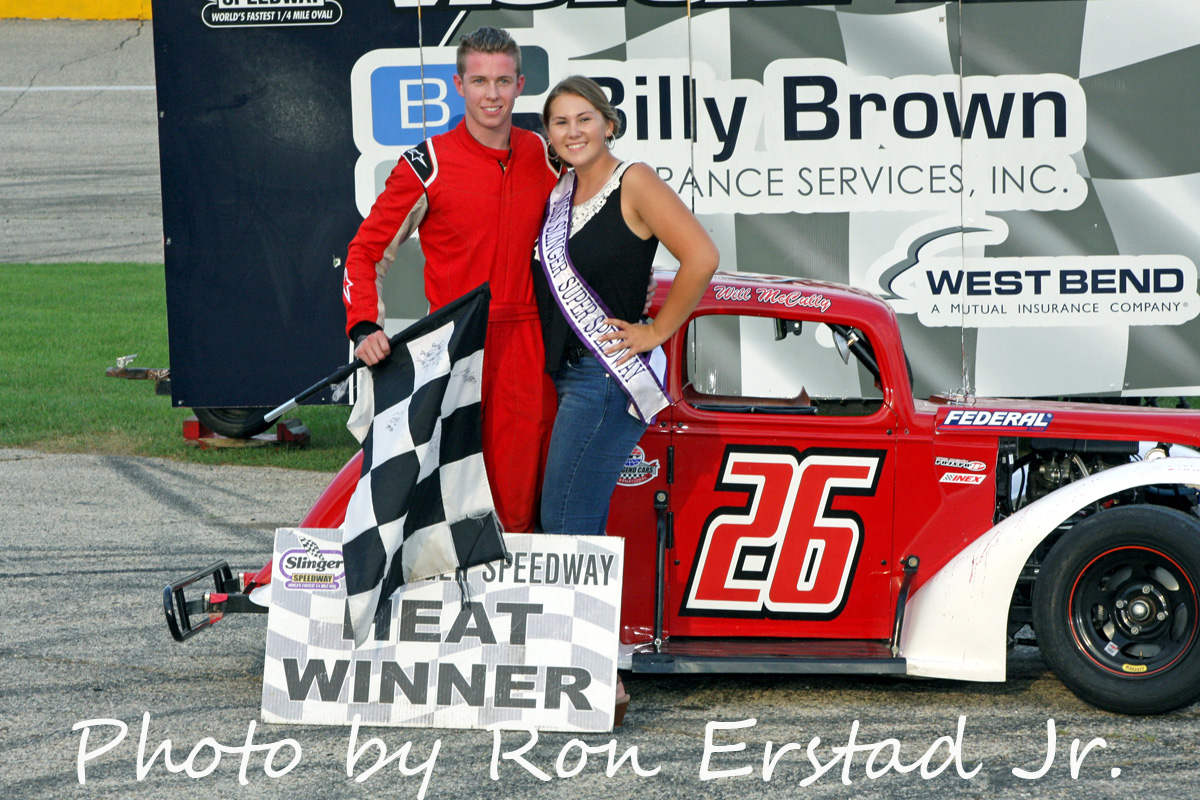 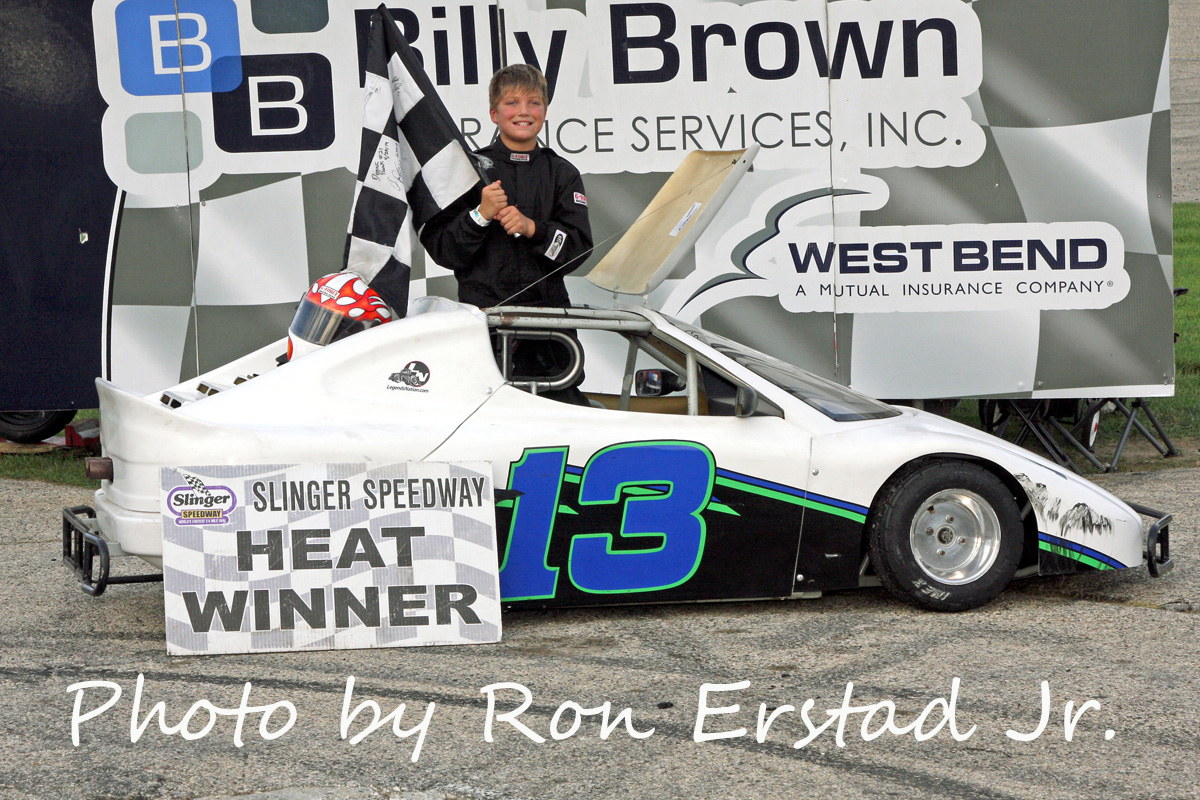 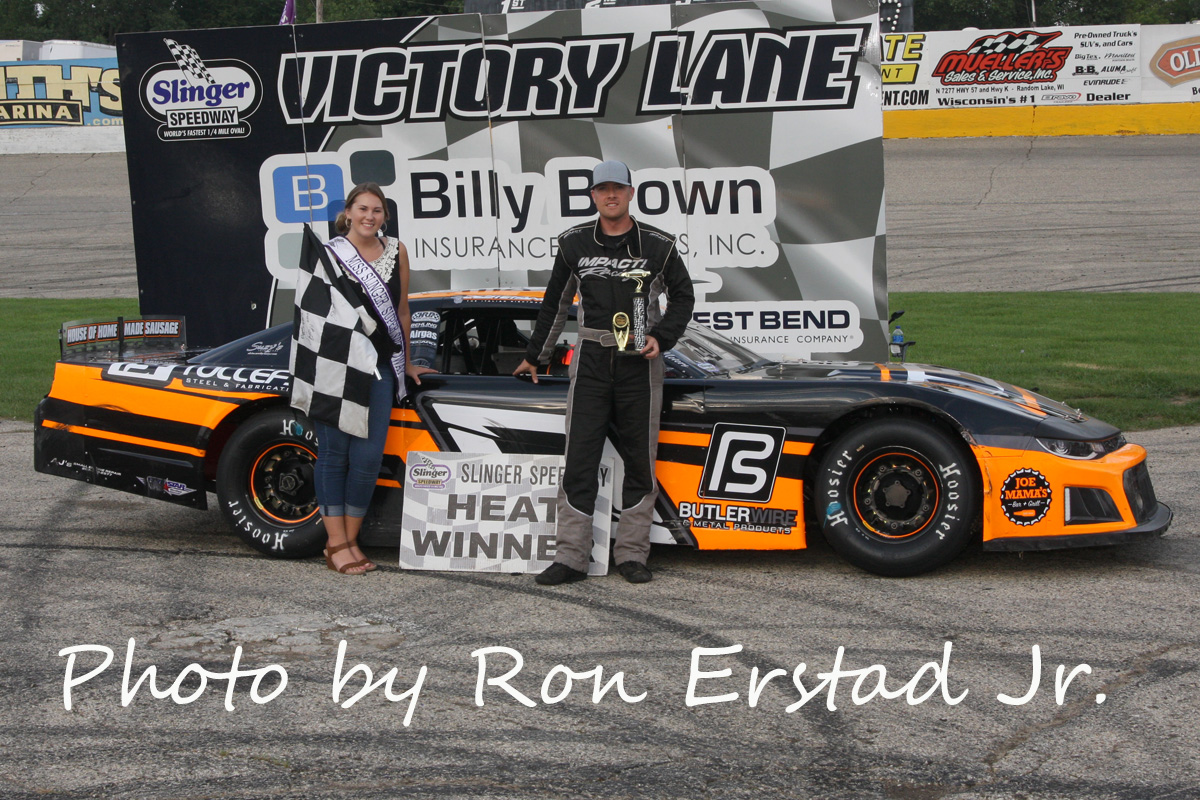 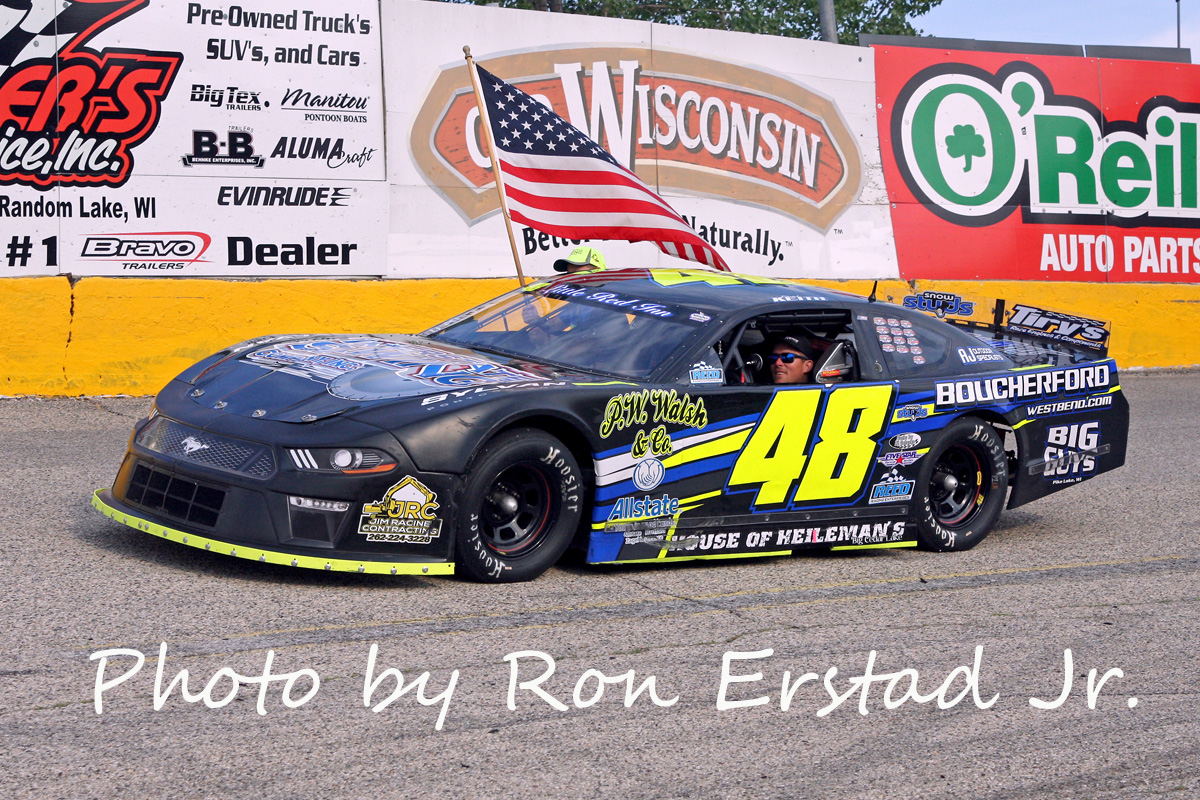 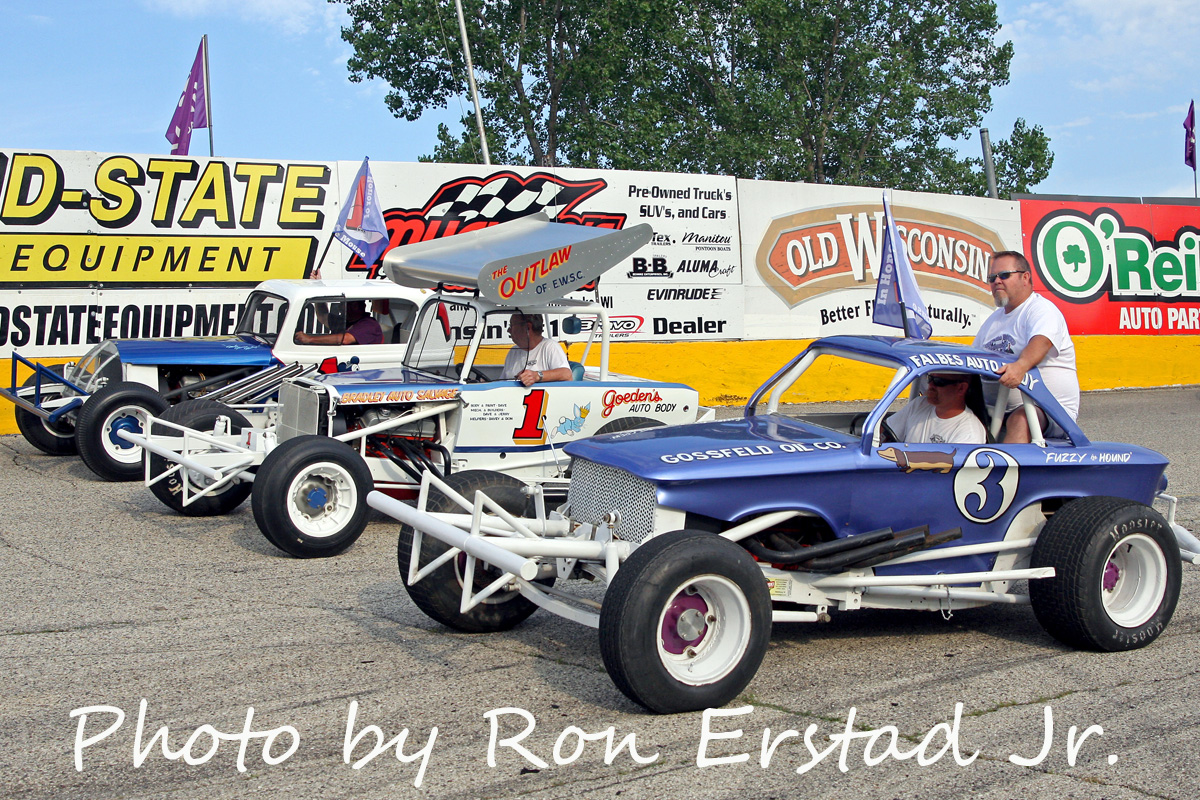 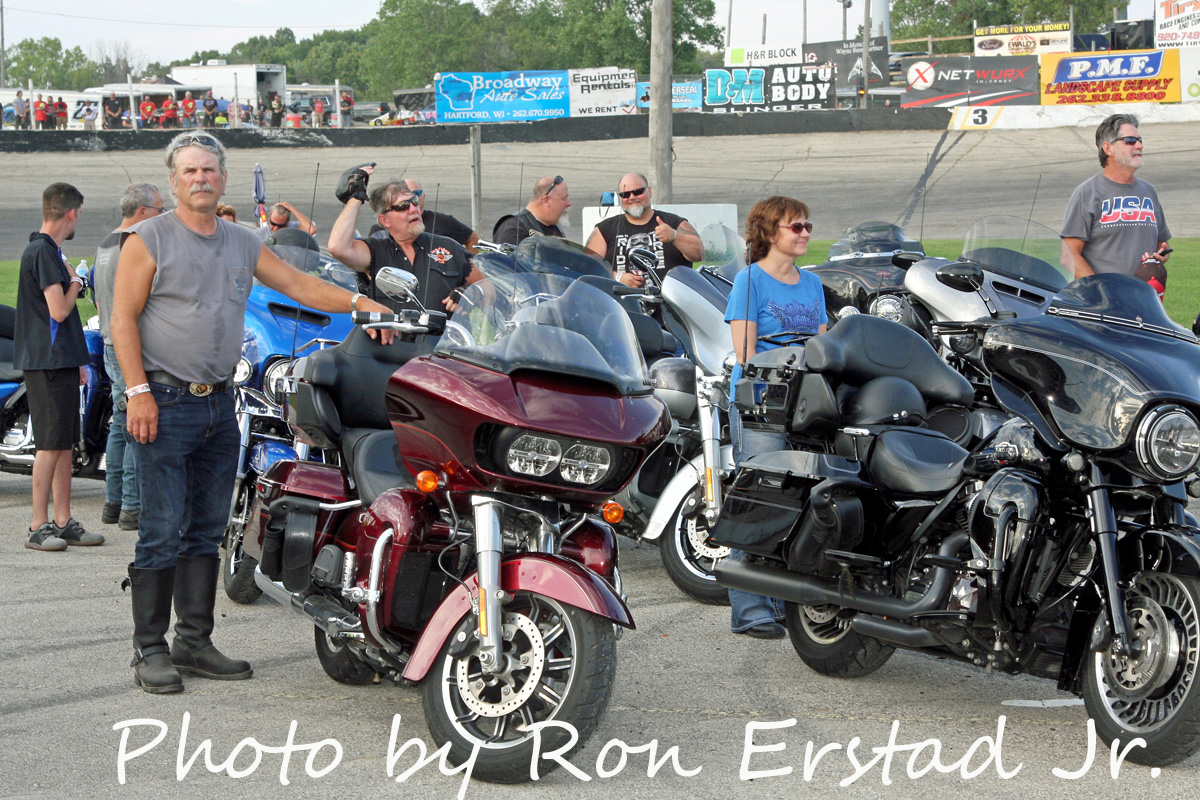