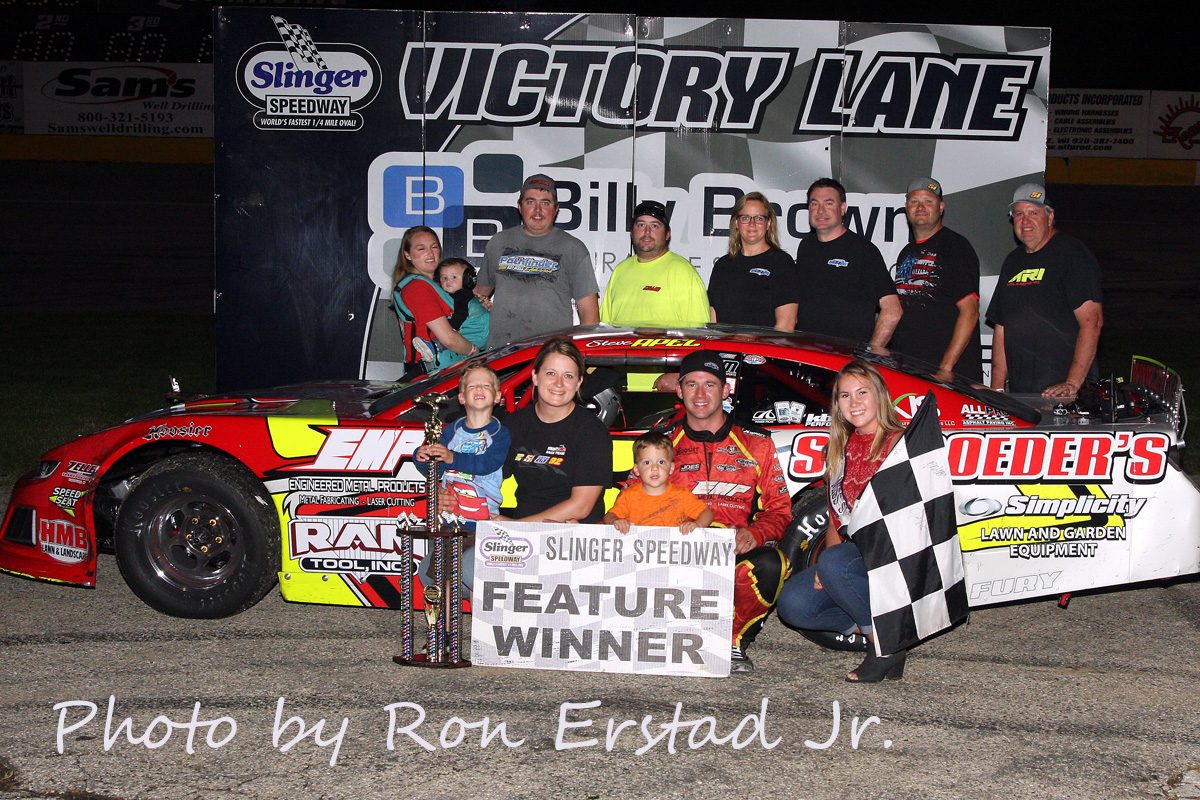 Slinger, Wis., June 30—Back behind the wheel of his family’s familiar car #51, Steve Apel bested Alex Prunty and Brad Mueller to collect his second super late model feature victory of the season in the Zeller Transportation 75 Sunday night at the Slinger Super Speedway.
Nick Wagner and Rich Loch paced the field to the green flag and the two ran side by side for the opening laps before Wagner edged ahead slightly just prior the first caution flag waving on the fourth lap when R.J. Braun slid off the track on the front straightaway. Wagner and Loch continued to battle for the lead as racing resumed while Steve Apel and Brad Mueller occupied their tire tracks in tight formation behind them as farther back Conrad Morgan, Brad Keith, and Grant Griesbach raced for fifth. The inside line prevailed as Wagner grabbed the lead and brought Mueller along with him into second while Loch contested third with Apel from the outside lane. Morgan and Griesbach were the beneficiaries of some tight quarters racing between Morgan and Keith that dropped Keith back two places as Alex Prunty joined the front runners. Griesbach appeared to experience a mechanical issue as his car shot up the track and into the turn four wall on lap nine to draw the second caution flag of the event. Mueller and Apel used the outside lane to charge into first and second respectively on the restart as Rich Loch followed into third as Wagner tried to fend off a challenger over fourth from Alex Prunty. Apel began to pressure Mueller for the lead and things got dicey at one point when Mueller’s car twitched loose in turn two and Apel slammed the brakes to let him catch his car which allowed Loch and Alex Prunty to close in. The top four raced in a pack until Loch’s car broke loose off turn four and he looped around on the frontstretch to draw a caution flag on lap 21. Mueller chose the outside lane for the restart and the decision proved costly as once racing resumed, Apel was able to charge by on the inside to take the lead while Alex Prunty moved into third just ahead of Nick Wagner and Brad Keith. Behind them, Dennis Prunty began to work his way forward as he raced around Conrad Morgan and Mike Held, leaving them to battle aggressively behind him. A few laps later the caution flag waved again on lap 48 when a mechanical issue sent Morgan’s car hard into the backstretch wall. Apel chose the inside for the restart and the outside lane proved to be detrimental to Mueller again as Apel charged to the lead and Alex Prunty edged into second from the inside groove. While Alex Prunty chased Apel for the lead, Mueller slipped into a tough battle with Keith over third which allowed Dennis Prunty to close in as well. Mueller muscled his way into the third spot in the closing laps while the occurred just behind him as Keith and Dennis Prunty fought over the fourth spot. Their battle featured some fender-rubbing action that resulted in both cars getting extremely loose off turn four and ended when Keith ran out of real estate on the very high side of the track in turn two with Prunty right alongside him. With the action occurring well behind him, Apel drove to the victory over Alex Prunty while Brad Mueller finished third. Dennis Prunty finished fourth and Nick Wagner took the fifth spot. R.J. Braun finished sixth and Brad Keith fell to seventh and had harsh words afterwards concerning his battle with Dennis Prunty. Ryan DeStefano finished eighth while Mike Held, and Tim Lampman rounded out the top ten finishers.

Jimmie Evans took the checkered flag first in the 30-lap sportsman feature but Jacob Schraufnagel was declared the winner after post race technical inspection. Jay Kalbus was second and Paul Wagner was third. Dale Lecus Jr. finished fourth and Andrew Meyerhofer crossed the finish line in fifth. Dale Lecus Jr. and Adam Bleskan were the winners of the sportsman heat races and Jay Kalbus was the fastest qualifier after turning in a lap at 12.694 seconds.

Brandon Tackes won the 25-lap Slinger Bee feature as the held off his father Marty Tackes for the victory and giving the family race team a sweep of the top two spots. Zach Greer finished third and Paul Reagles and Ricky Gebhardt were fourth and fifth respectively. The Slinger Bees heat races were won by Evan Hassler and Marty Tackes and Paul Reagles was the fastest qualifier at 15.219 seconds.

The Wisconsin Sport Trucks made an appearance on the high-banks and Dom Sokolik scored the victory in their exciting 20-lap feature event. Drew Habeck finished second and Brian Vixmer was third. Kasey Vanderloop took the checkered flag in fourth and Dylan Vandenberg finished fifth. Dylan Vandenberg and Cody Vanderloop were the winners of the Wisconsin Sport Truck heat races and Kyle Quella set fast time with a lap of 13.897 seconds.

The Bar Car race was won by Kevin Moldenhauer driving the Sheryl’s Club 175 entry and Jakob Hassler won the Spectator races in his Chevy Cavalier. Bill Shavlik broke Ryan Loval’s win streak at three by winning the Figure 8 race to conclude the evening. 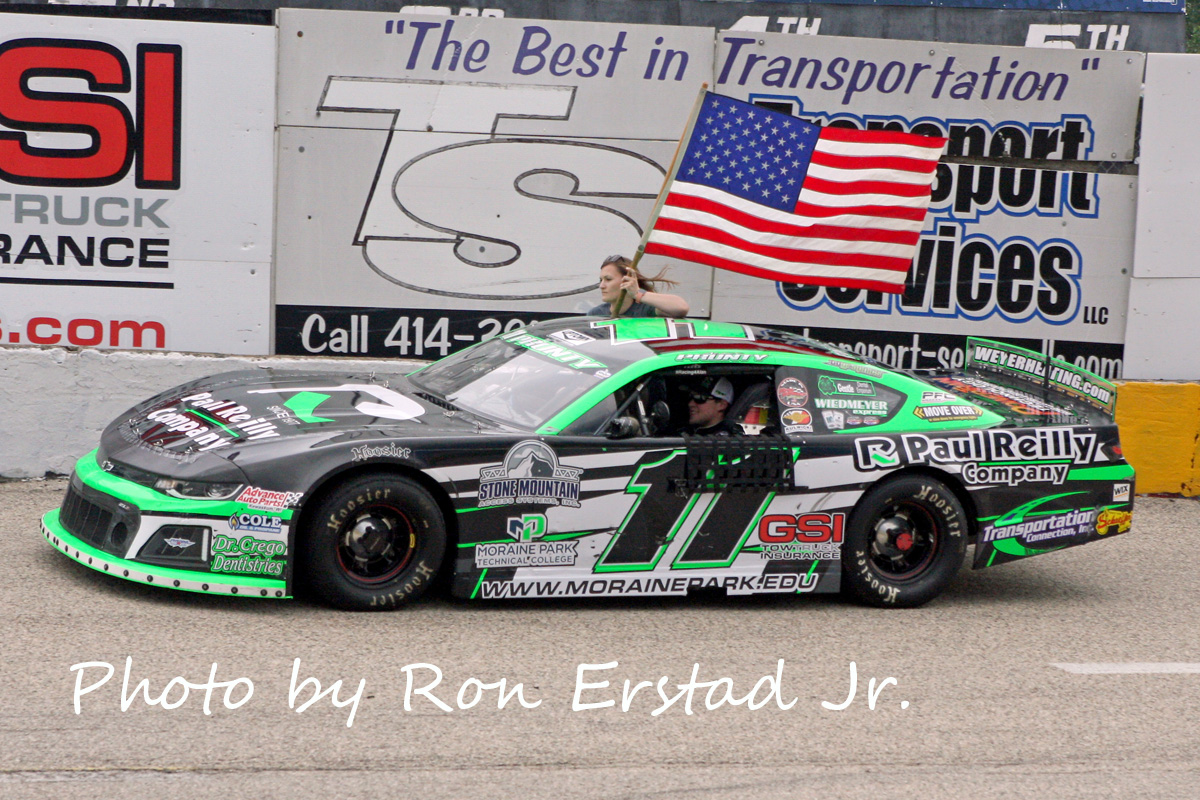 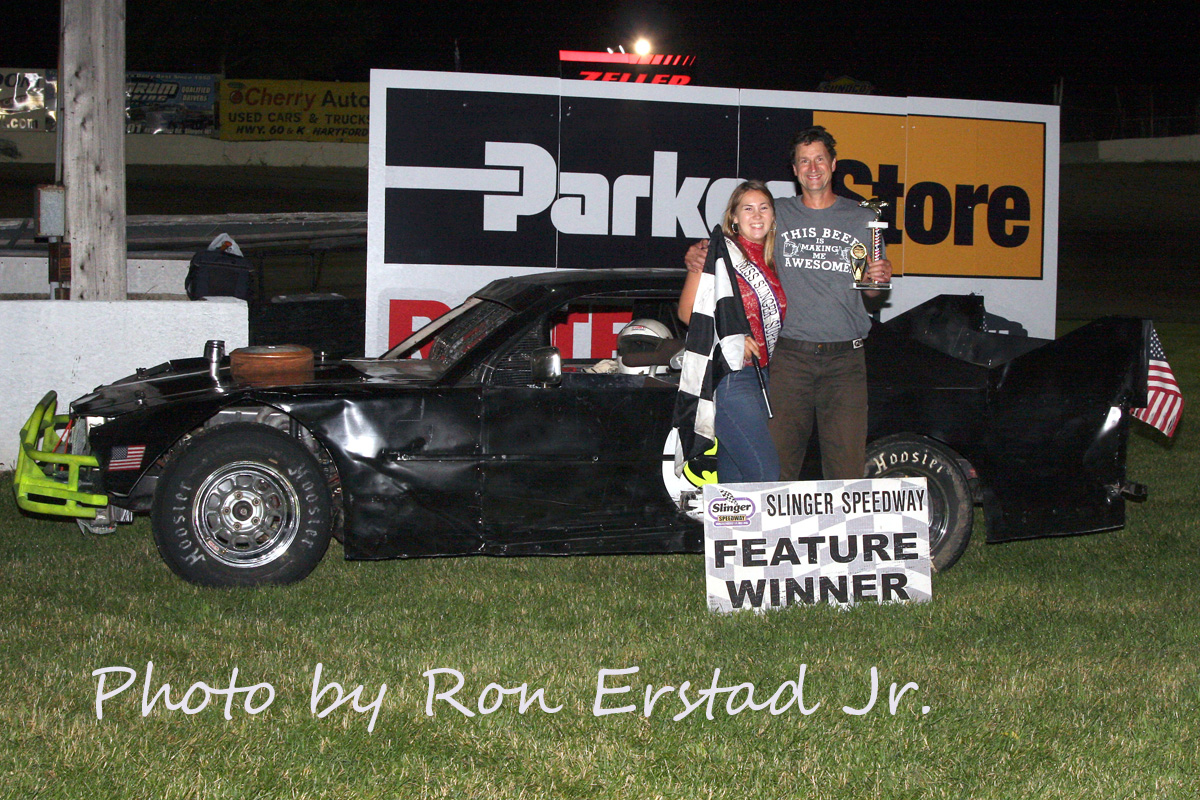 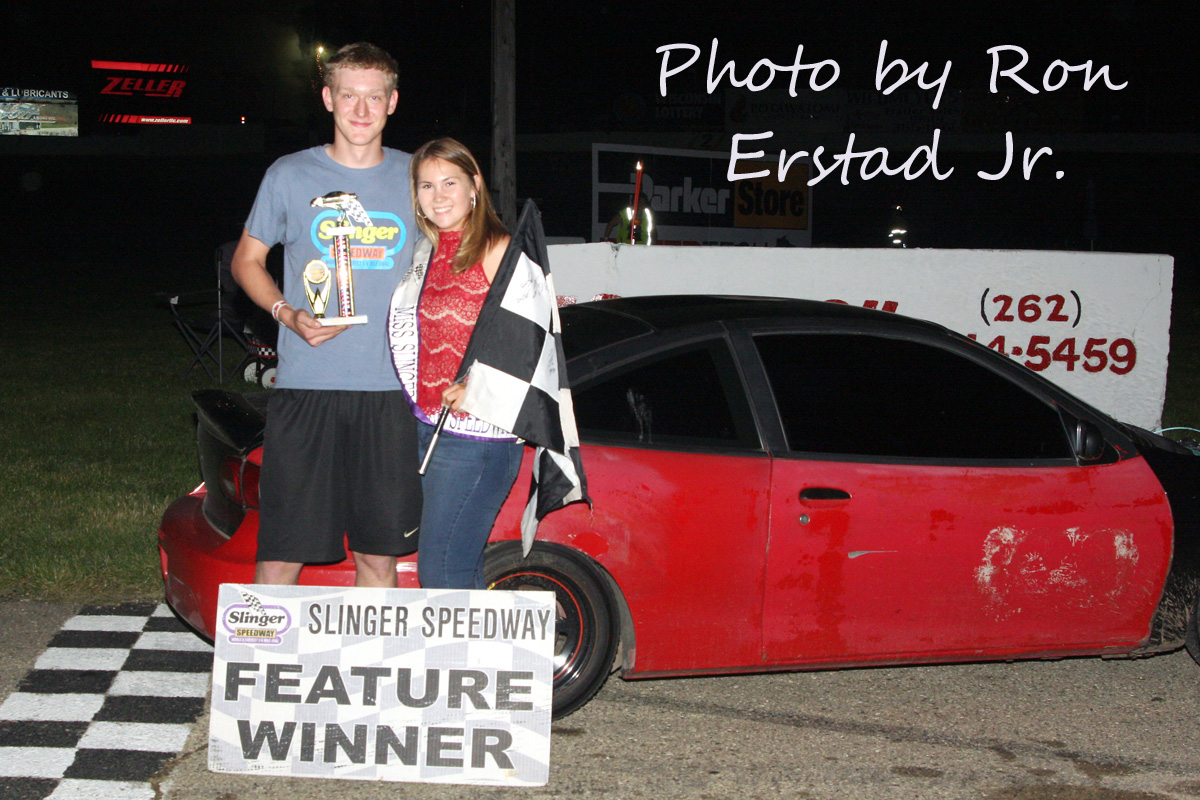 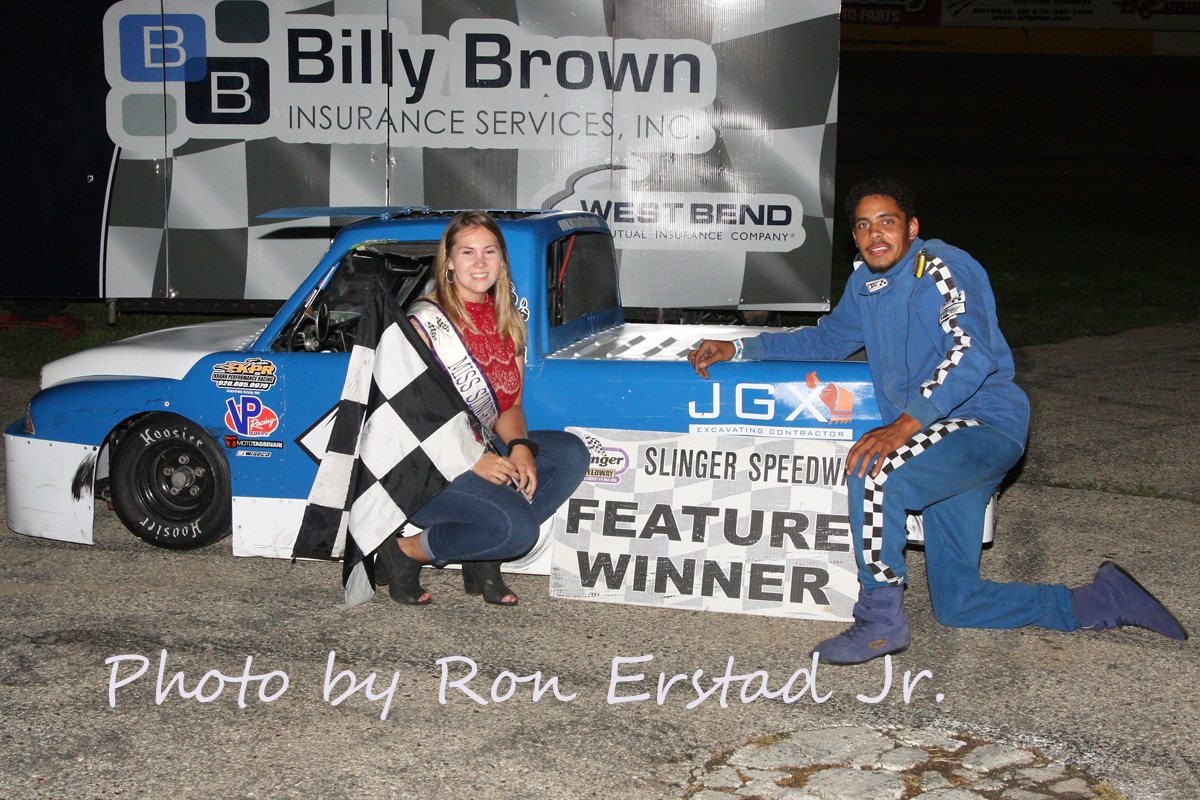 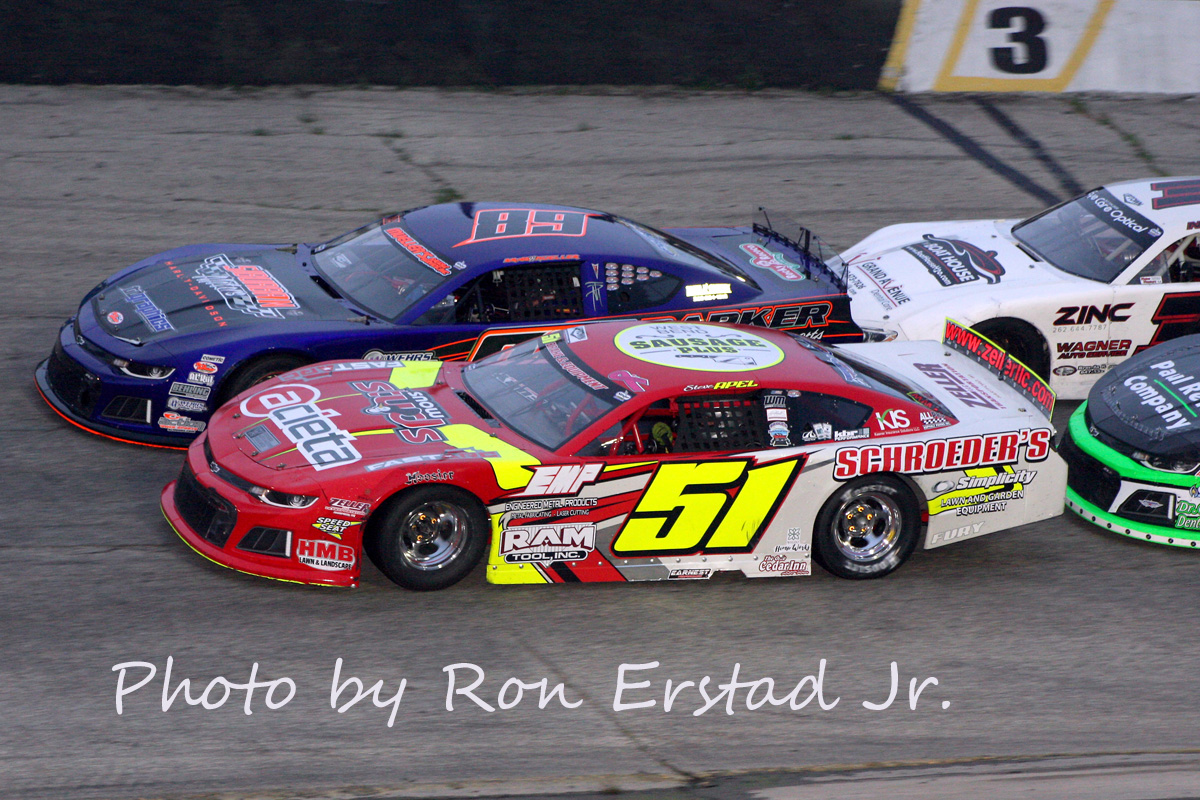 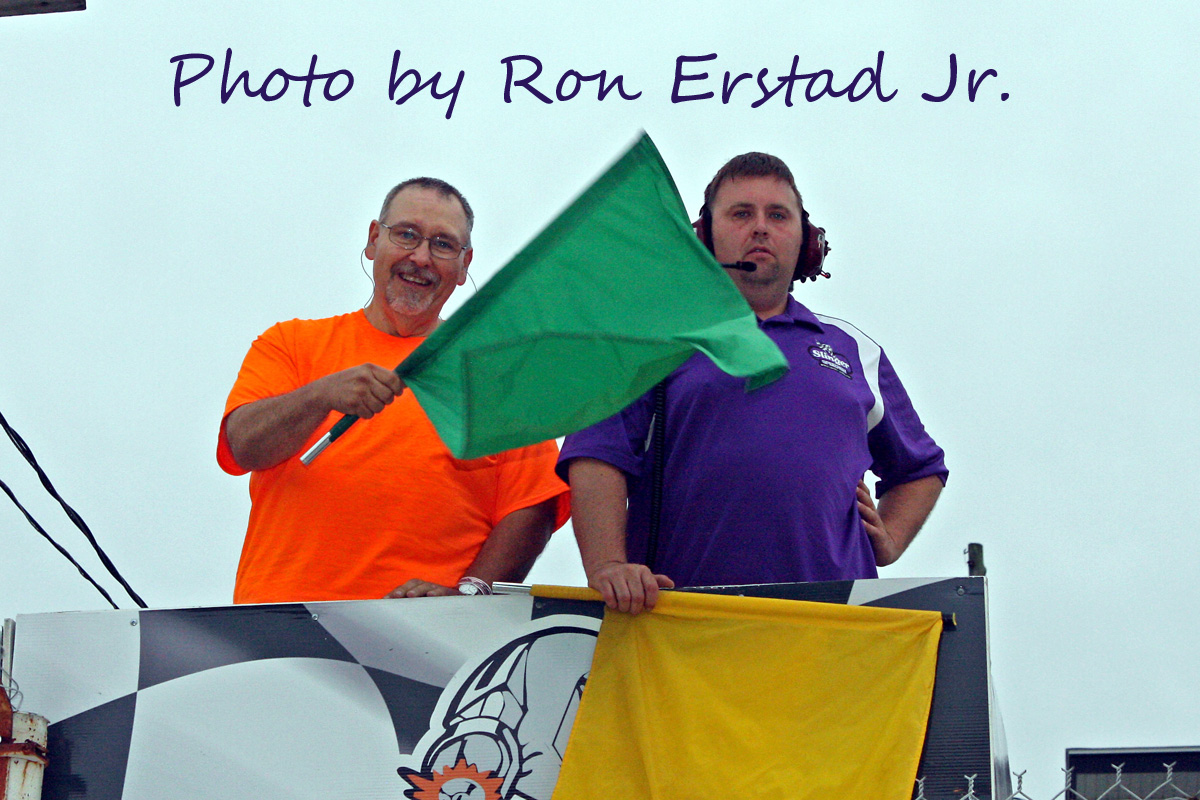 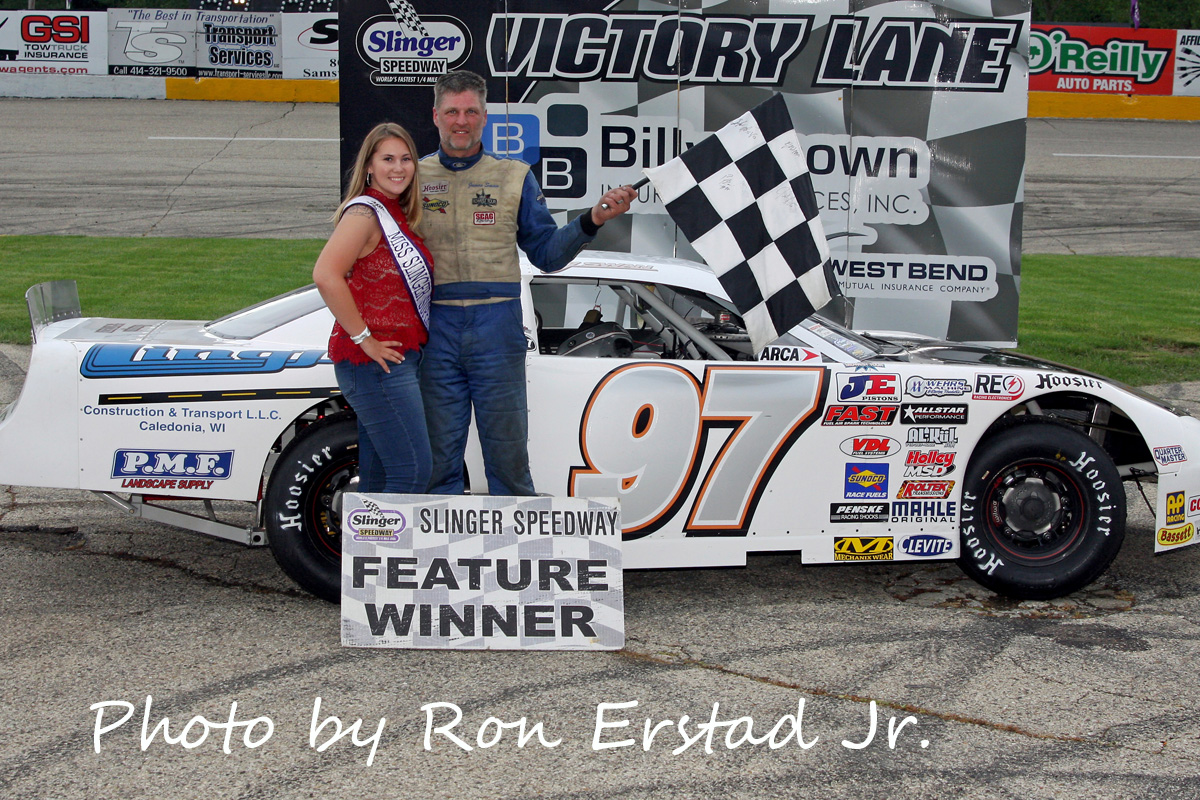 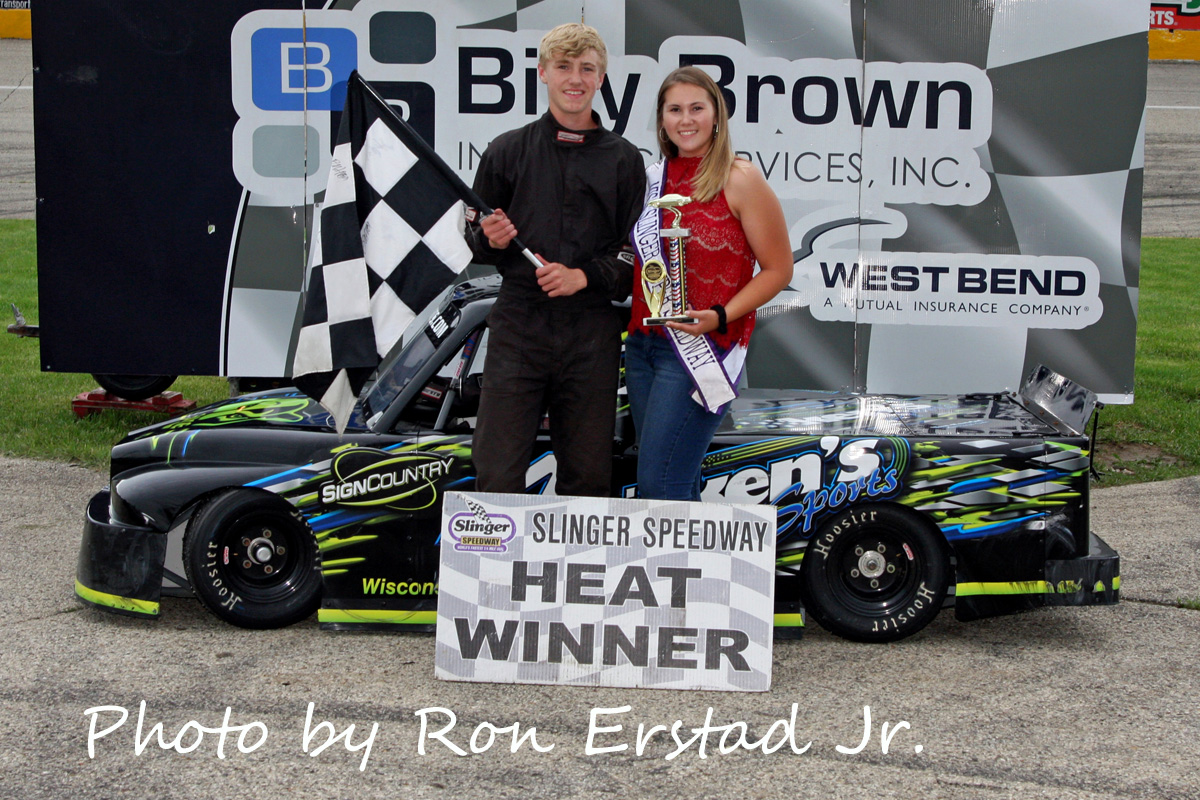 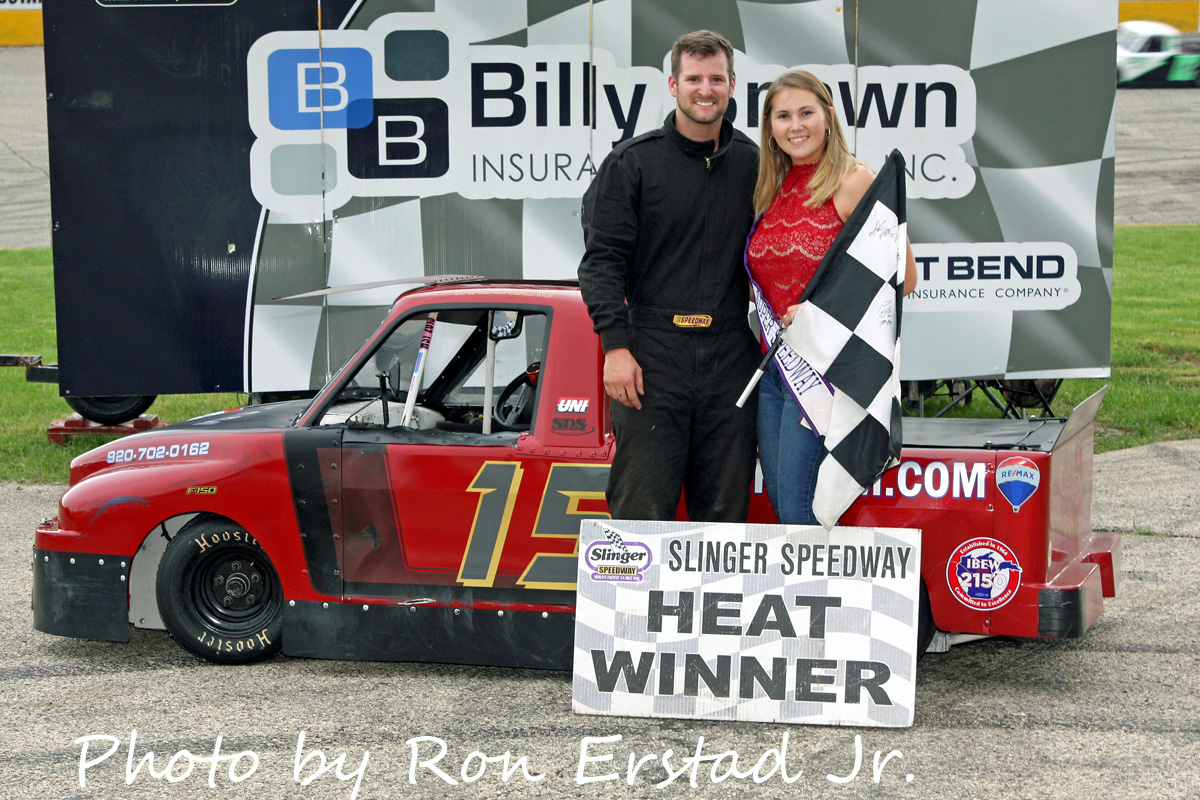 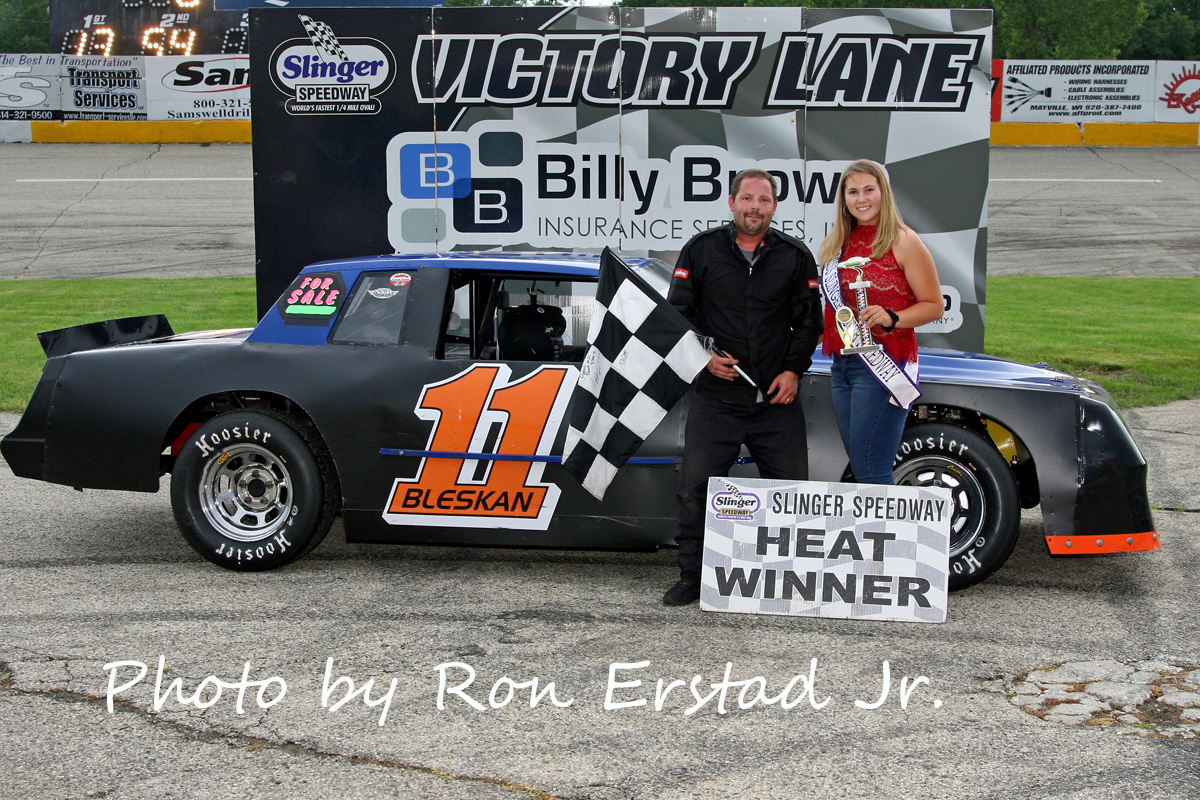 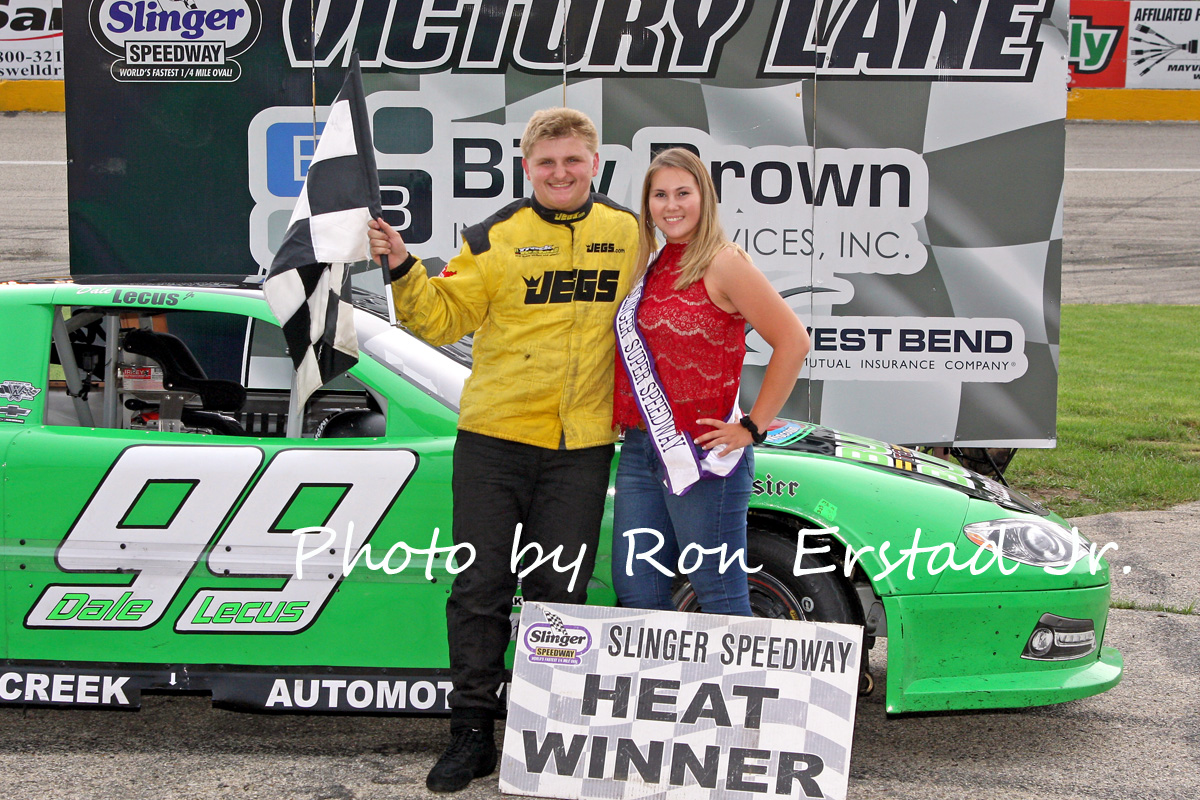 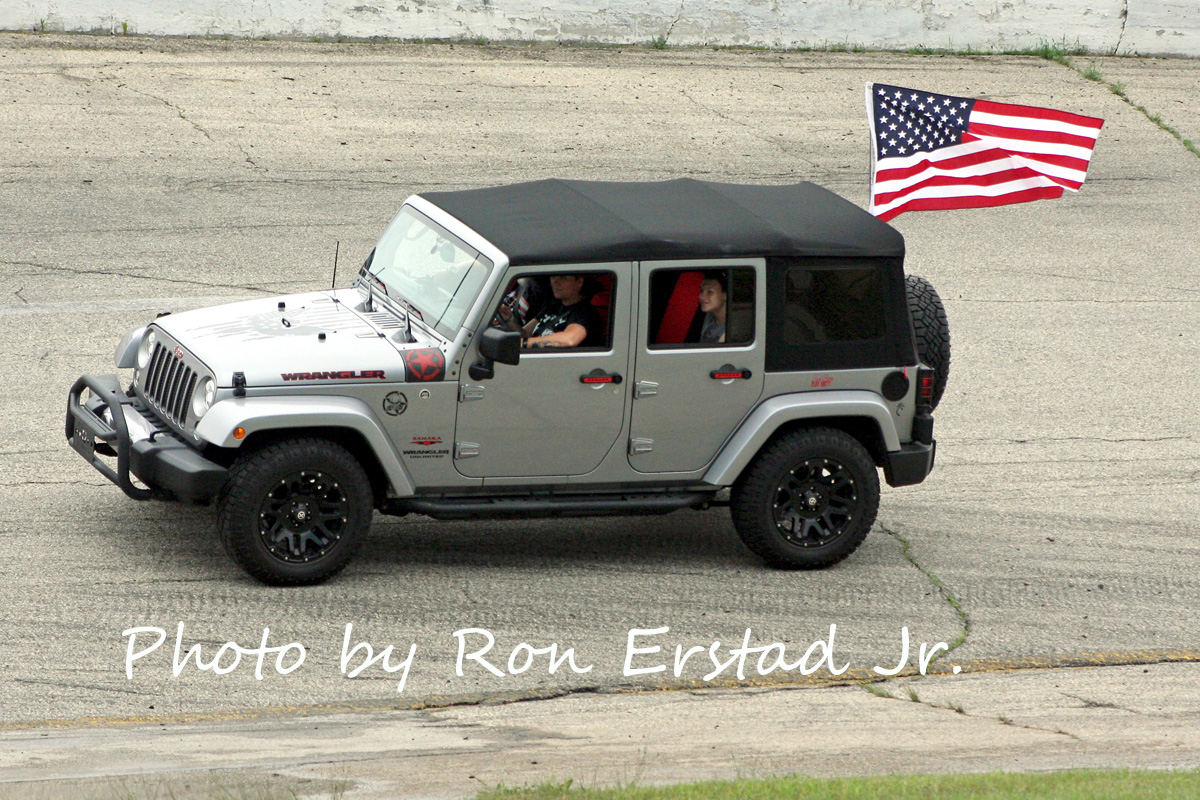 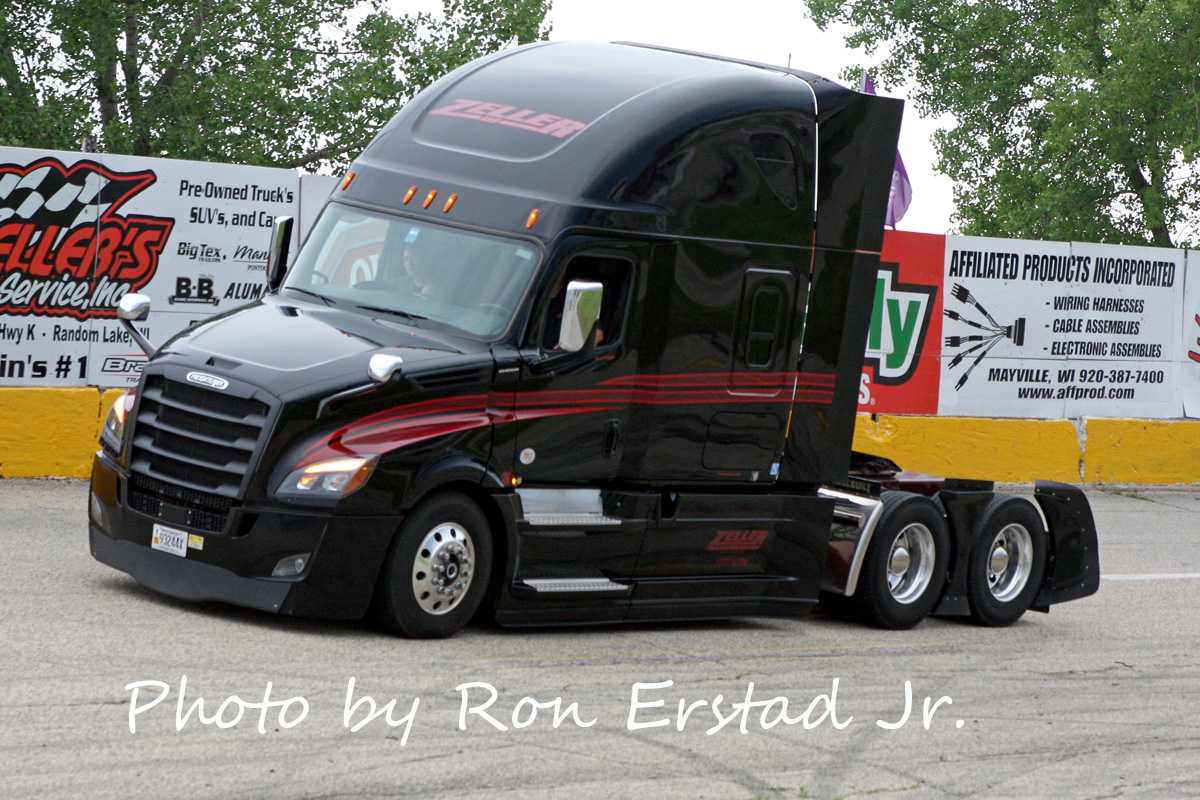 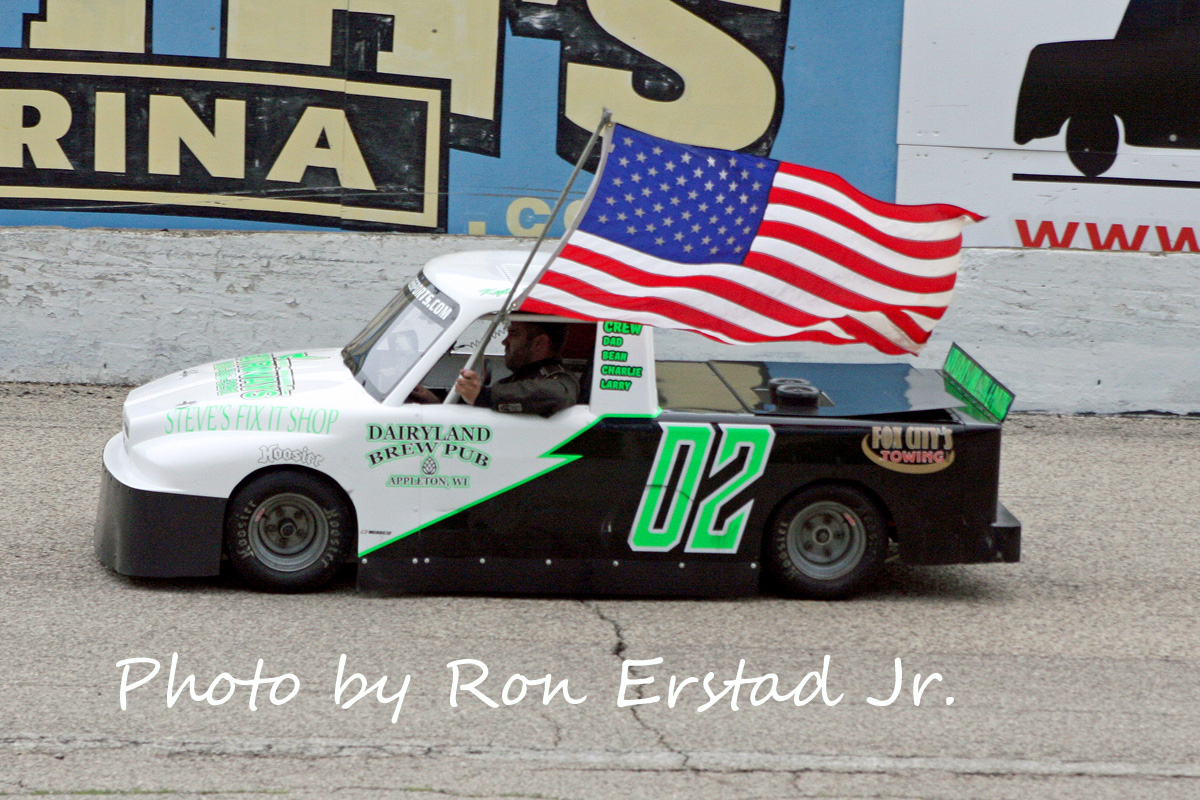 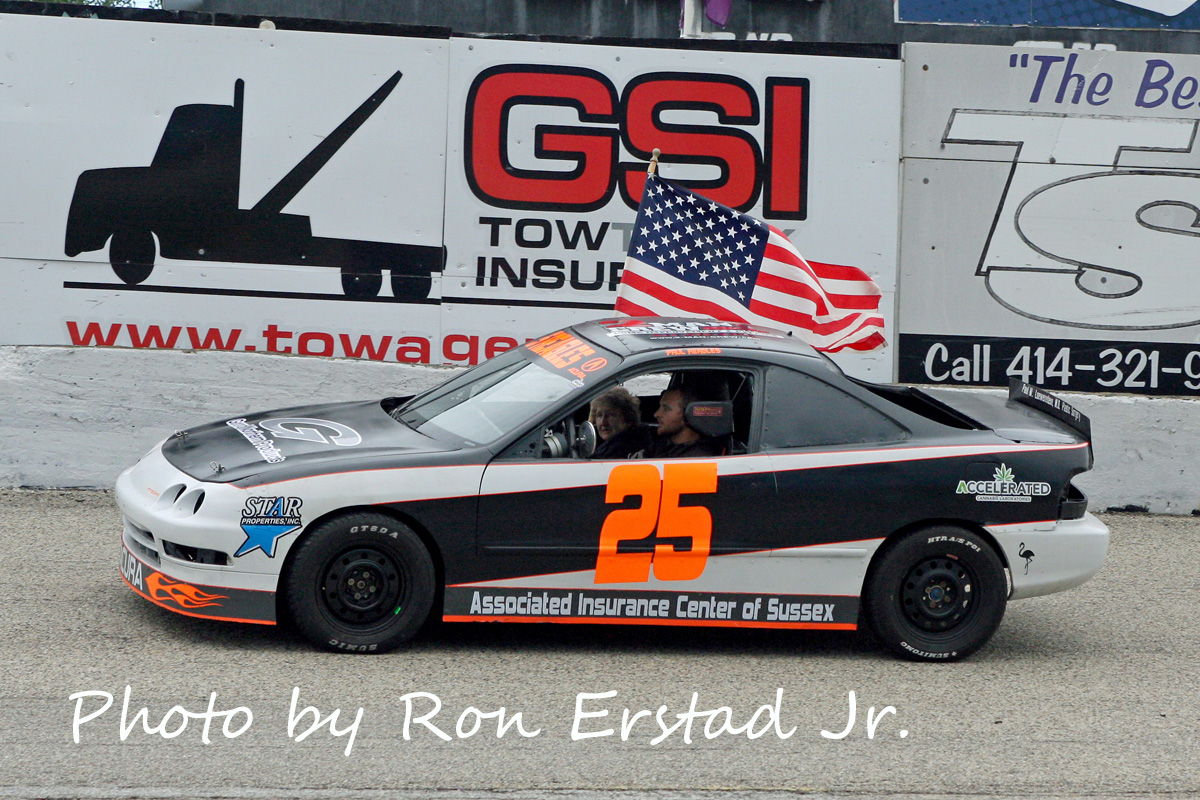