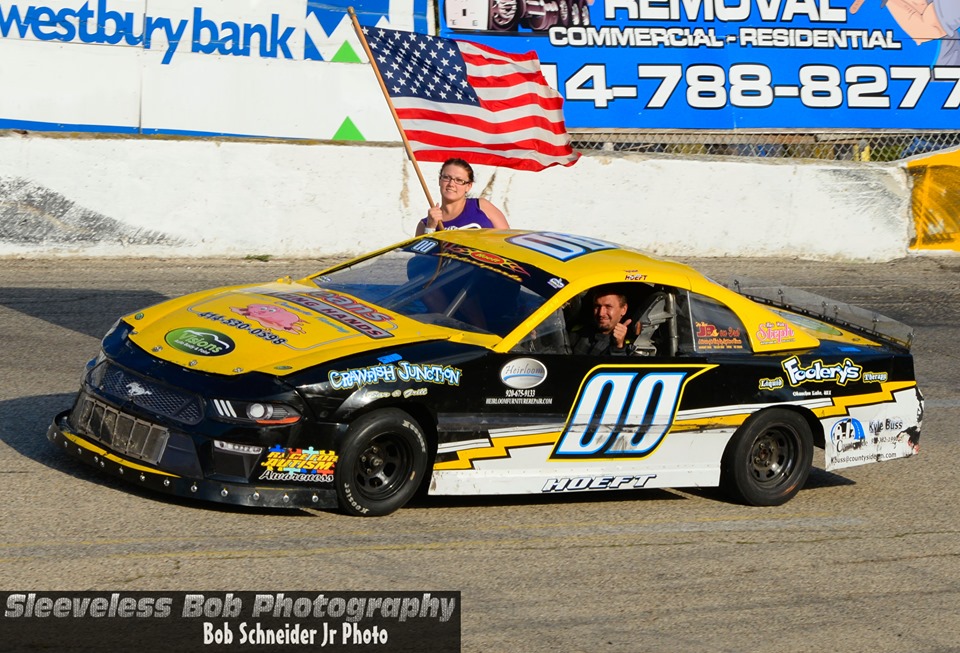 #mytrackmyroots
Driver of the #00 Super Beez

Join us for the Race for Autism Awareness tomorrow night, as the Hobby Stocks, and some extra Super Beez, invade Slinger Super Speedway!

How did you get into racing?
My parents had been taking me to the track since I was little. Then they bought me a go-kart when I was nine years old and it took off from there. They spent $125 on that first go-kart, and thousands since then…

What do you like about Slinger Super Speedway?
The tradition. So many great drivers have come through there, and it’s the toughest short track in the country to win at. And it’s the fastest ¼ mile oval in the world. So basically…the tradition.

Tell us what is going on this weekend?
Well, it’s the Race for Autism Awareness Shootout for the Hobby Stocks and the Super Beez. We’ve been working on this part of the deal since January or February, trying to get everything organized. Lots of great sponsors have come on board! It will be the toughest race to win in our division [Super Beez] all season, with all of the traveling cars that are coming – there are a lot of good ones! It’s a two-race deal for both the Hobby Stocks and the Super Beez, with the race at Jefferson tonight and the race at Slinger tomorrow night. There will be an overall winner in each division between the two nights.

Why did you choose Autism awareness to receive the funds?
My little buddy Danny has autism, so it started with him. Since then I’ve met so many other neat families with kids who are on the spectrum. I went to an event that the Autism Society of South Central WI put on, it was a football camp and was free for all of the kids. I asked them how they get the funding that and they said it all comes from donors. I got to thinking that through racing we could raise some funds and help them out a little bit.

Who do you need to thank?
Crew: My mom and dad (David and Beverly), my girlfriend-Tara, Nick, George, Kevin, Darryl, Jason, Josh, the Kreuser family, Dustin, Tyler, and the wives/girlfriends of my crew. Sponsors: Foolery’s Liquid Therapy (Okauchee Lake), Bean’s Helping Hands (Oconomowoc), Crawfish Junction (Johnson Creek), Heirloom Furniture Repair (Jefferson), Countryside Auto Group-Kyle Buss (Beaver Dam), JB’s on Third (Watertown), Hair with Steph (Watertown), Visions Auto Body (Watertown), Luke Wegner Construction (Watertown), George Sparkman Auto Repair (Loves Park, IL), Joe Mama’s Bar & Grill (Colgate), Wolff Pack Apparel and Promotions (Watertown), Serenity Concepts (Whitewater), Allstate Insurance-Nick Wendt (Oconomowoc). Anyone else: All the race fans that come out each and every weekend! All the track promoters that give us a place to race. Anyone behind the scenes at the race tracks that are forgotten about – the unsung heroes behind the scenes.

What is your favorite memory at Slinger?
The old school Nationals with Morgan, Schill, Trickle, Bickle, Shear…I don’t know what years they were, but growing up the nationals were THE event. Basically all the Nationals.

The saying goes that there are two types of people in the world. What two categories would you put them in?
The straight shooters and the bullshi*#ers. [Which one are you?] laughs I’m pretty straight forward and I think that‘s a lot of my problem. I say exactly what I’m thinking.

Which Slinger driver (past or present) do you respect the most?
Conrad Morgan. If I can be at the level he is when I am at his age, with all of the accomplishments he has reached over those years, we are doing something right. And he’s very helpful, he doesn’t shy away. He’s helped me a lot over the years with making my car go faster, finding my line at Slinger, and calming me down when I’m frustrated. That’s not the easiest thing to do.