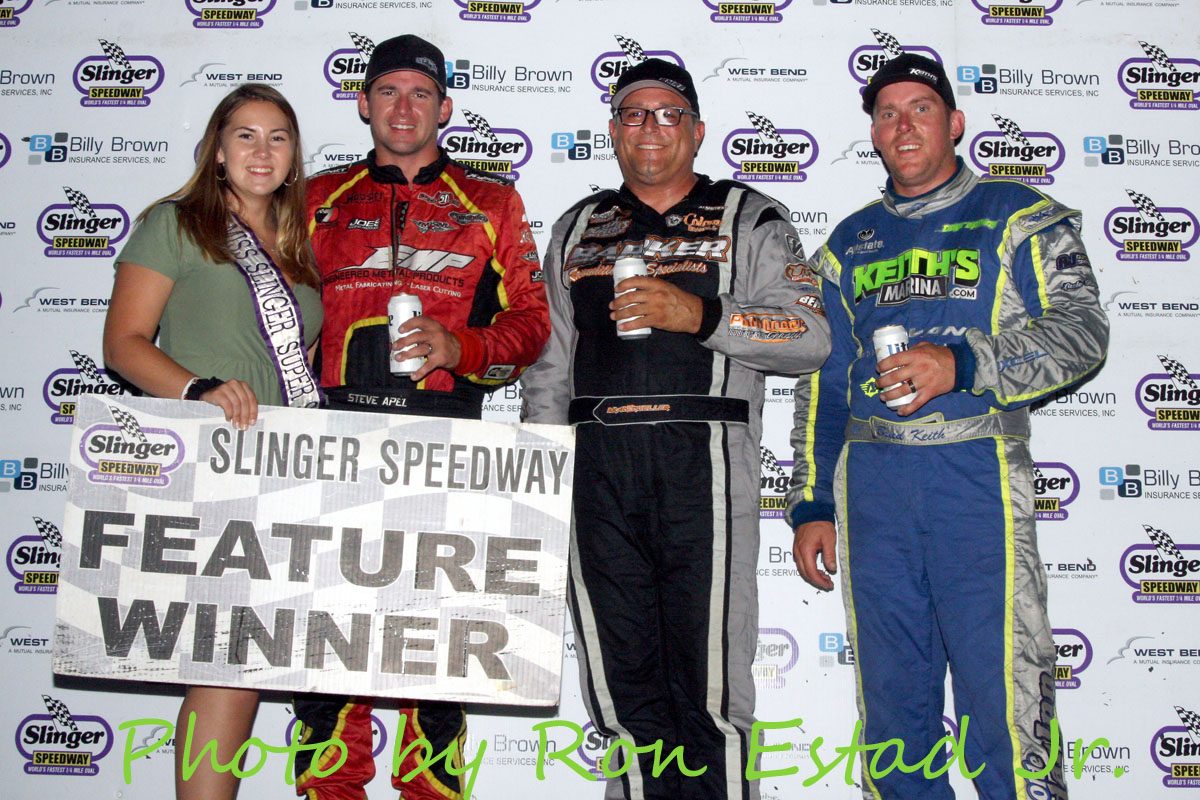 Slinger, Wis., Aug 4— Steve Apel and Brad Mueller staged a superb battle for the lead throughout the Obermeyer’s 41 Auto Body 75-lap super late model feature Sunday night at the Slinger Super Speedway before Apel was able to edge ahead to his fourth main event victory of the season.
“I’ll tell you what, we need to pack these grandstands because that’s what we do…put on a show for you,” Apel said afterwards referring to his spirited duel with Mueller for the win, “I wouldn’t want to race anyone else for a win besides him (Mueller). He gave me a lane and he ran me tight but he gave me a place to race…man what a race!”
“Was that exciting or what?” Mueller rhetorically asked the crowd, “That’s called respect and we try to teach the people that’s the way it should be done.”

Tim Lampman charged to the lead at the drop of the green flag over R.J. Braun, Conrad Morgan, and Chris Blawat while both Steve Apel and Brad Mueller began to work their way forward from deep in the field. Morgan caught Lampman and took the lead as Lampman ran his car in the high groove and R.J. Braun also used the low line to move into second place as Rich Loch slid through the infield off the backstretch after becoming swept up in some hard racing for position. The race remained green and Blawat, Mueller, and Apel all moved into the top five as Morgan continued to lead over Braun. Braun was able to pull alongside Morgan and as the raced side by side for the lead, Mueller and Apel were both able to close in. The lead cars caught lapped traffic and as Morgan, Braun, and Mueller worked the traffic with some close calls, Braun’s car snapped around in turn four just after clearing the lapped machines to draw the caution on lap 34. Mueller timed the restart perfectly and was able to edge Morgan for the lead as racing resumed. Apel was also able to get around Morgan for second as Morgan found himself trapped in the outer lane. The second caution of the race waved on lap 43 when Nick Wagner’s car came to a stop entering turn one after battling hard for the fifth position with Lampman and Grant Griesbach. This time on the restart, Apel used the outside line to power by Mueller for the lead just as the caution waved once again a lap later for cars scattering off the track farther back in the field. As racing resumed, Apel and Mueller staged an intense and clean 25-lap side by side battle for the lead with neither driver laying a fender on each other and nary a rub mark on either car. Apel showed the ability to turn back Mueller’s challenges as the laps wound down and a final caution flag on lap 70 when Grant Griesbach and R.J. Braun tangled in turn two while racing for fifth set up a five lap dash to the finish. Apel was able to get a better restart than Mueller and he was able to ward off the challenges in the final five laps to drive to the victory just ahead of Mueller who finished second. Brad Keith made a late charge to take the third position while Chris Blawat finished fourth and Tim Lampman scored his career best finish in fifth. Jacob Vanoskey also had his best finish of the season in sixth followed by Grant Griesbach and Nick Wagner in seventh and eighth respectively. R.J. Braun and Pat McIntee rounded out the top ten.

Nick Wagner took top honors in the super late model fast dash and Steve Apel was the fastest qualifier after touring the speedway in 11.239 seconds.

Jack Stern masterfully used the outside groove to take the lead in the late stages of the 40-lap late model feature en route to his second victory in as many weeks. Tyler Schley followed Stern on the high side and drove to a second place finish while Jacob Nottestad finished third after spending numerous laps trying to find a way to the lead from the inside lane. Ryan Gutknecht led the most laps hugging the bottom but had to settle for a fourth place finish in the end. Tom Berens battled back from an early incident to finish fifth. Late model heat race wins were collected by Tyler Hromadka and Ryan Gutknecht while Jacob Nottestead set fast time at 12.030 seconds. 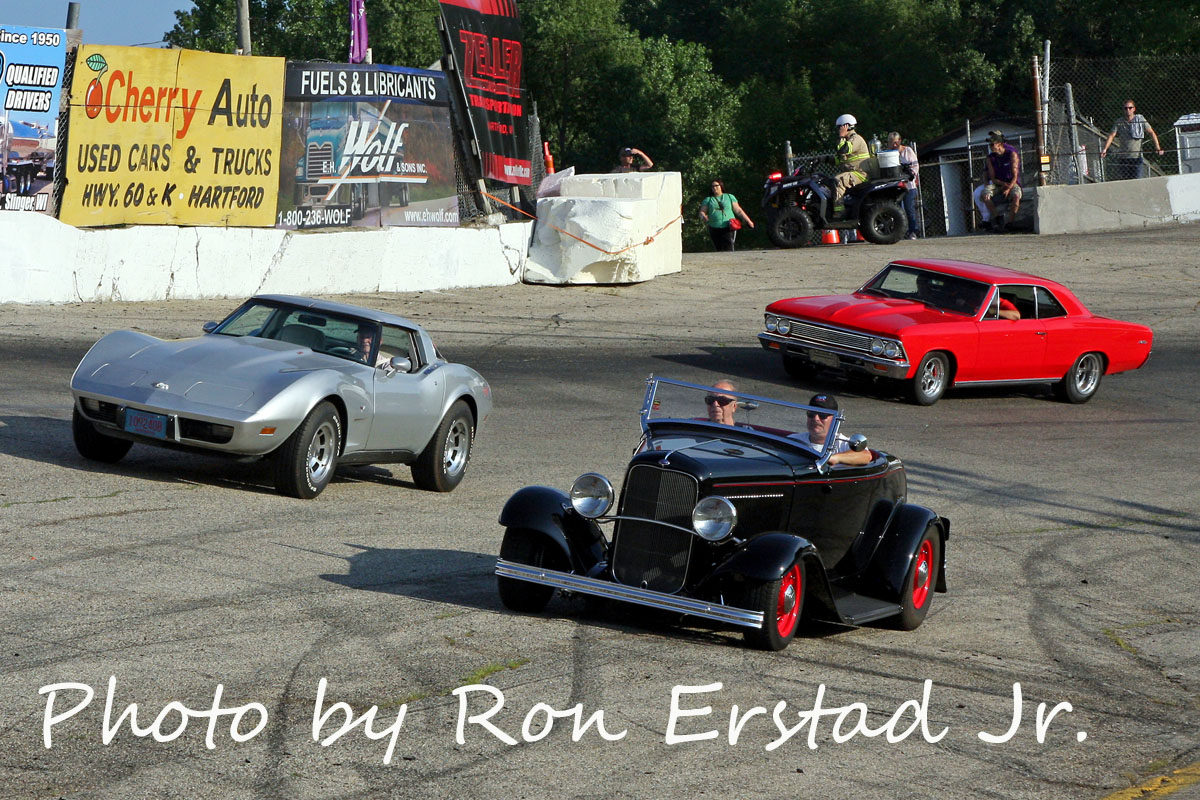 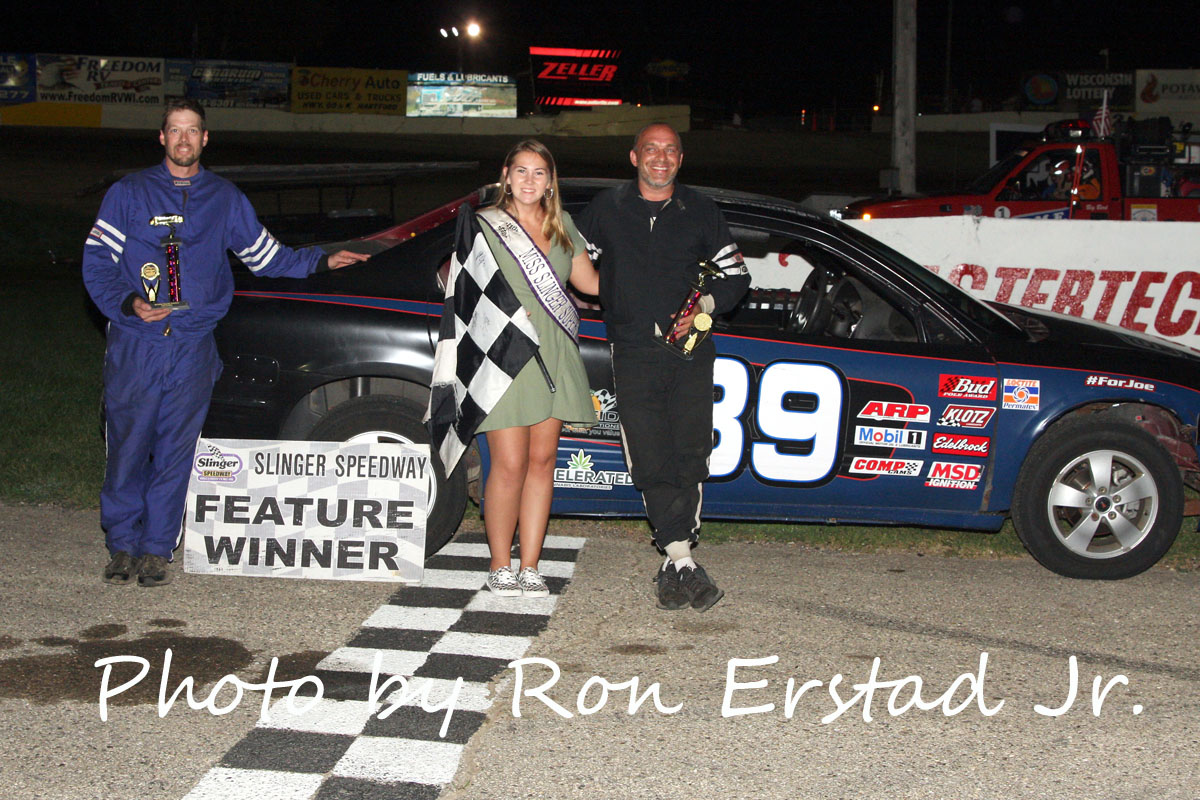 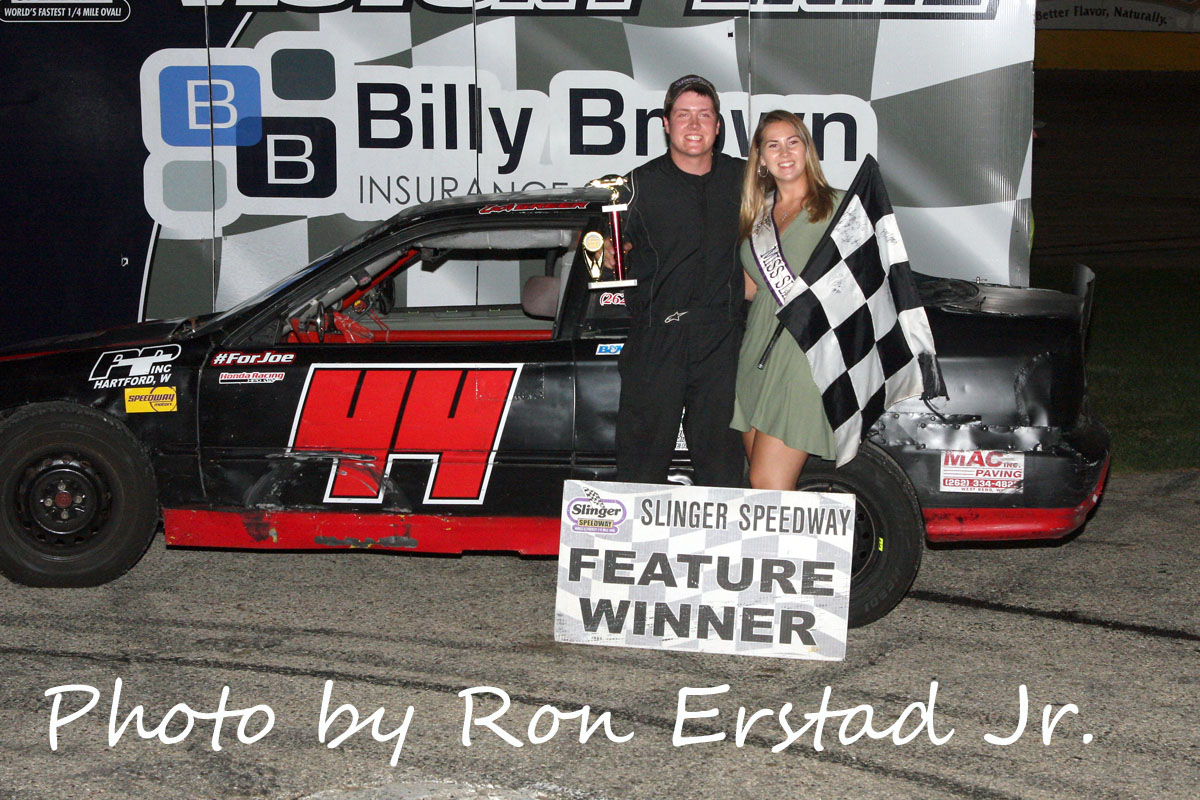 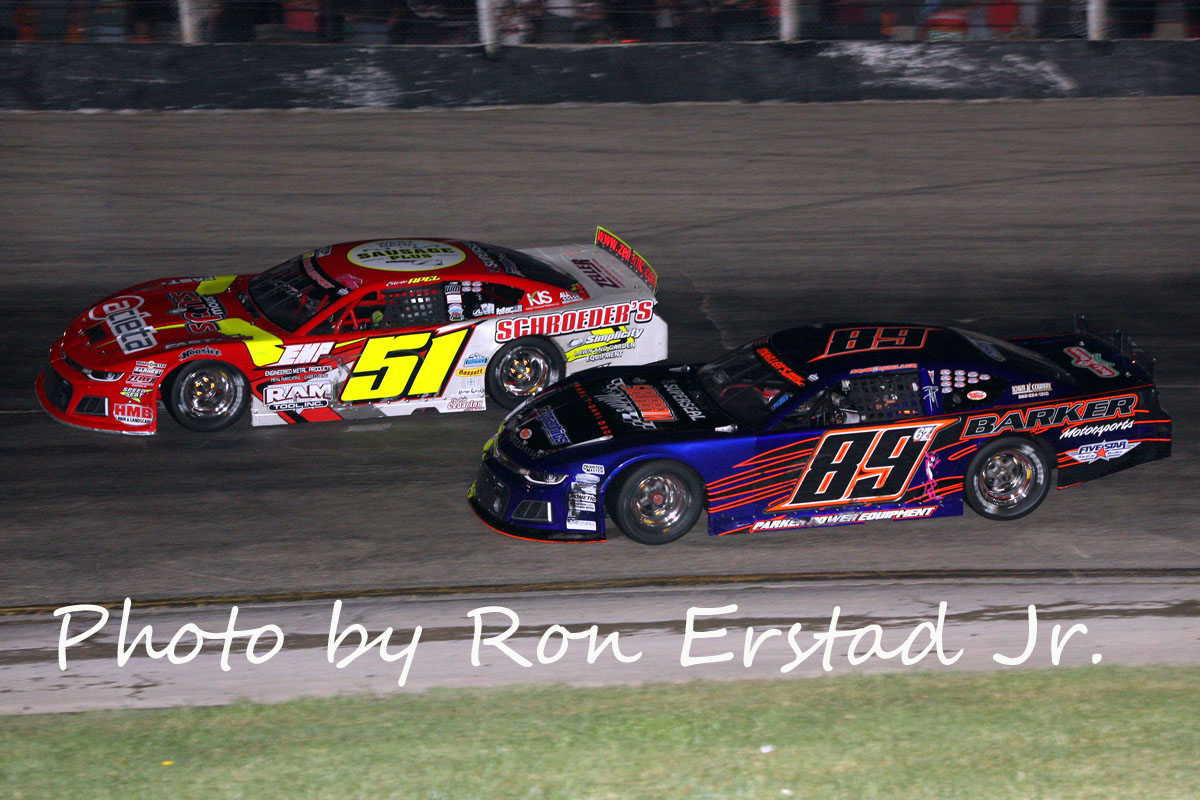 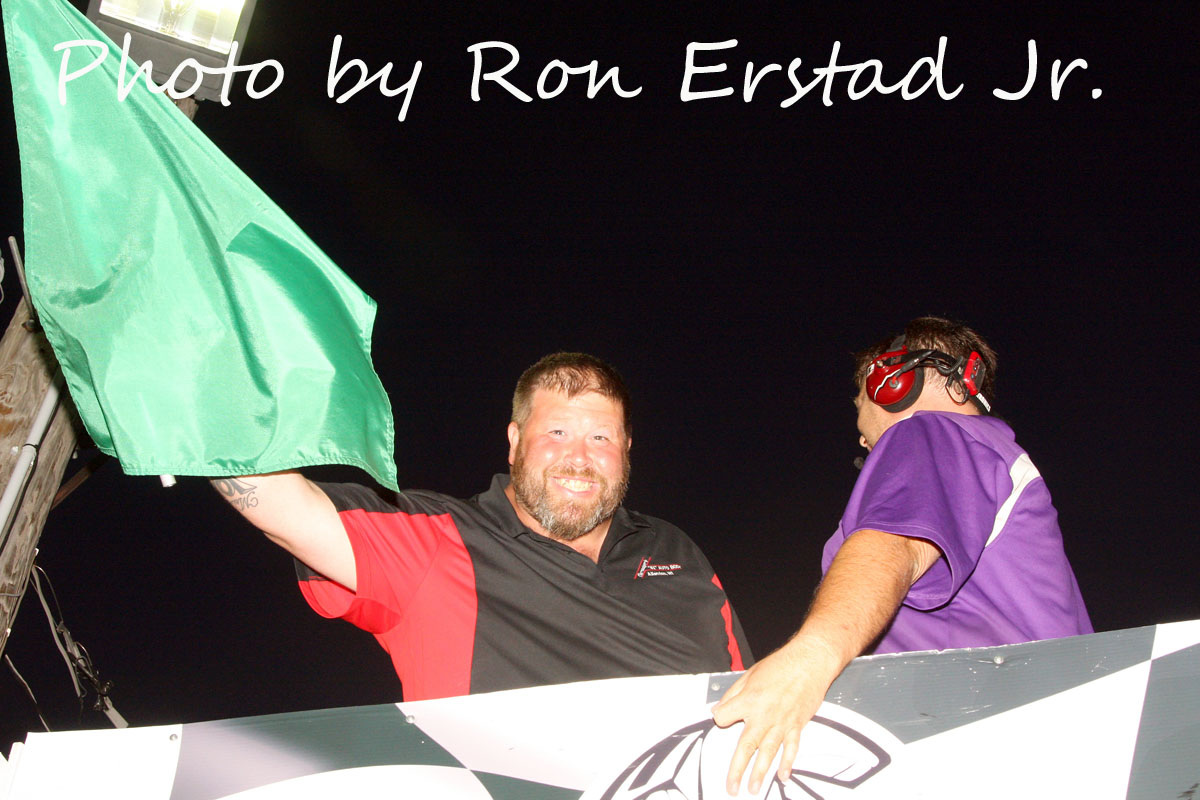 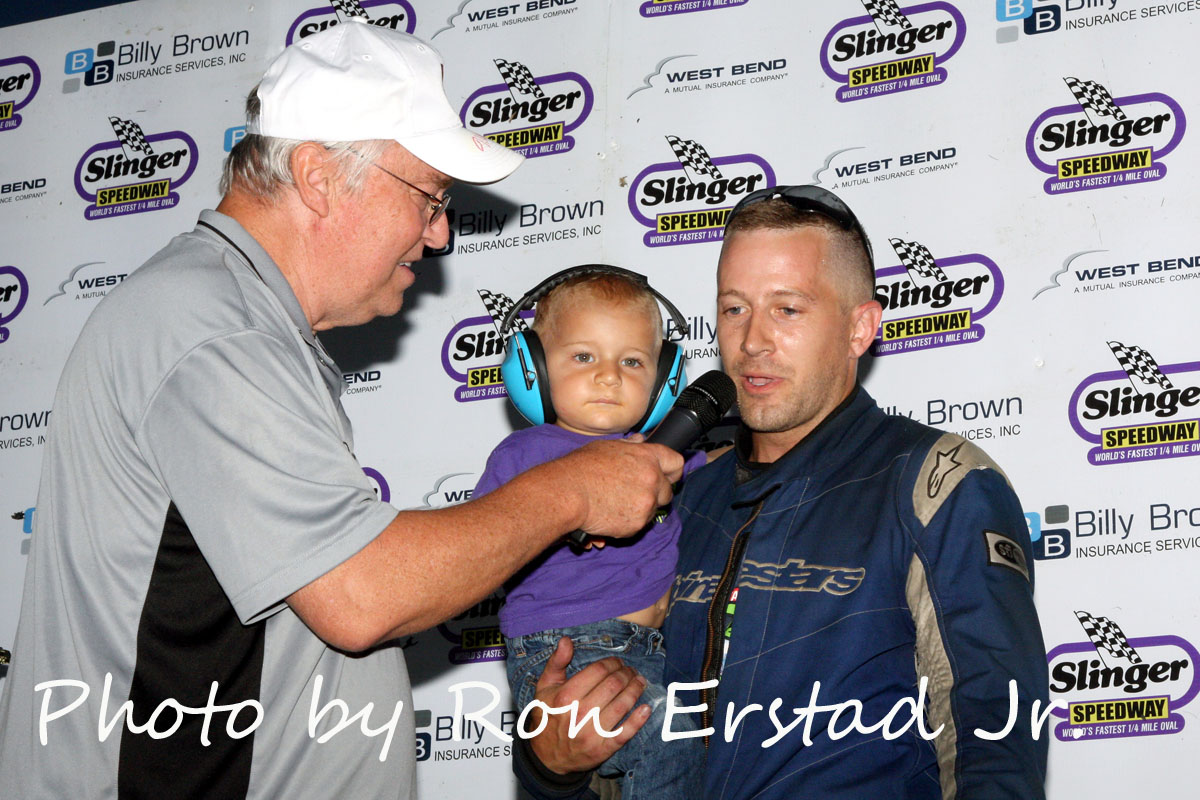 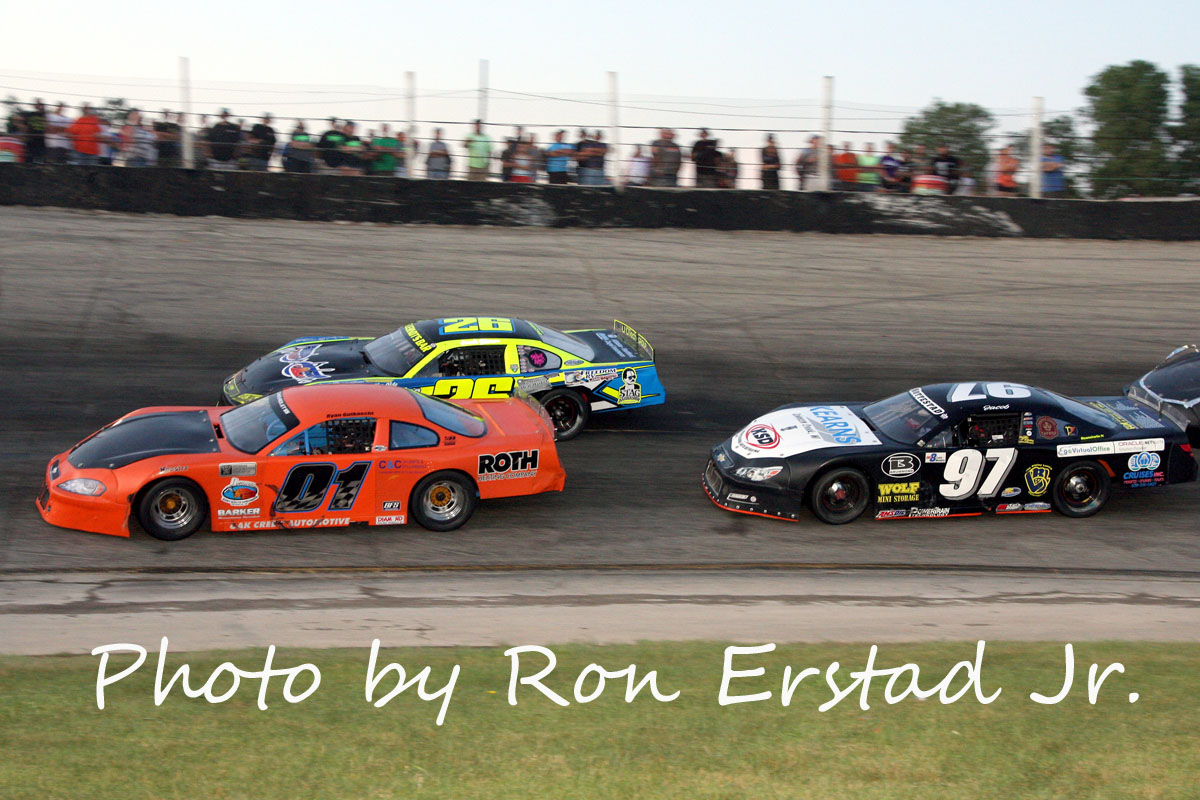 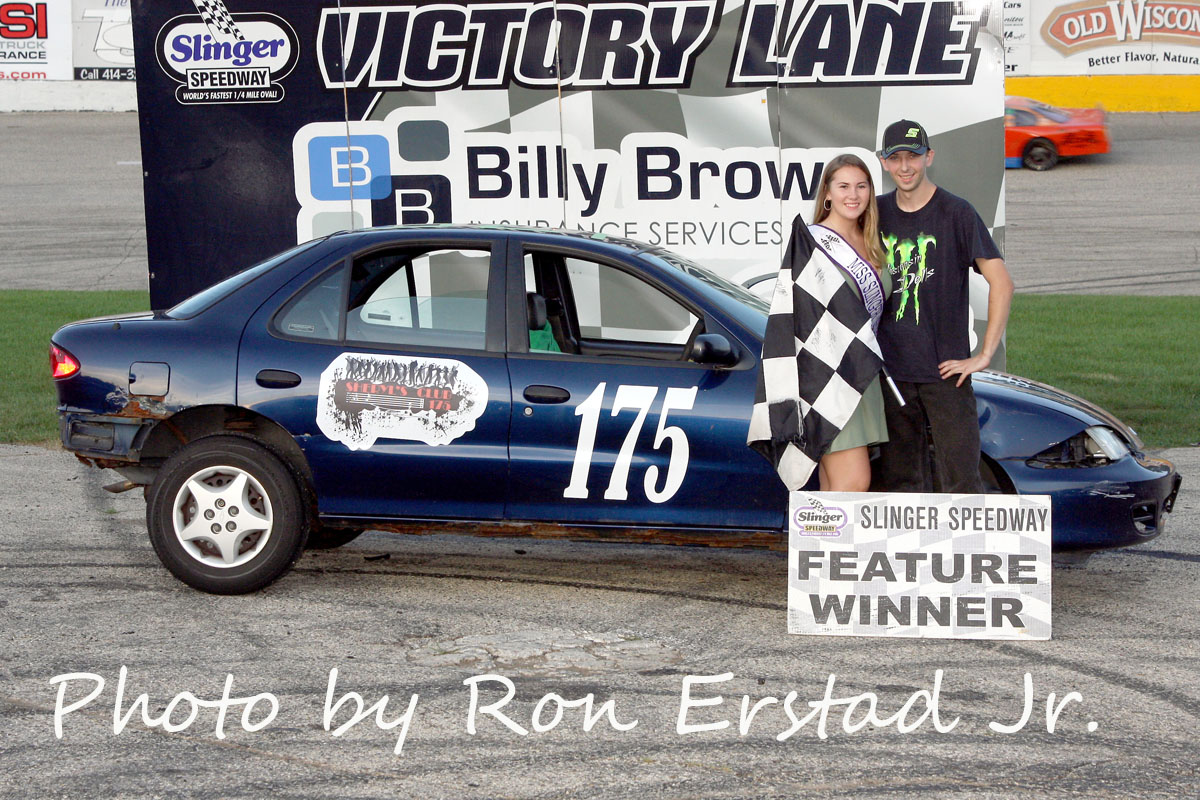 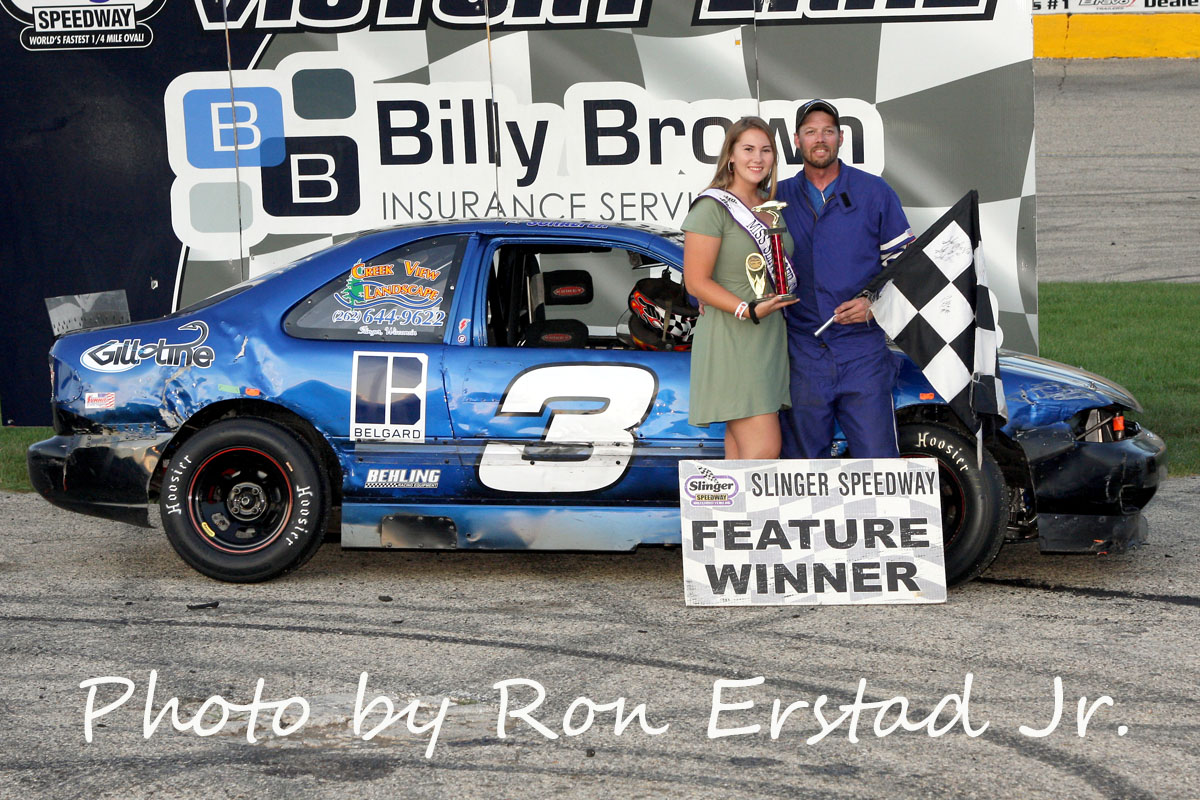 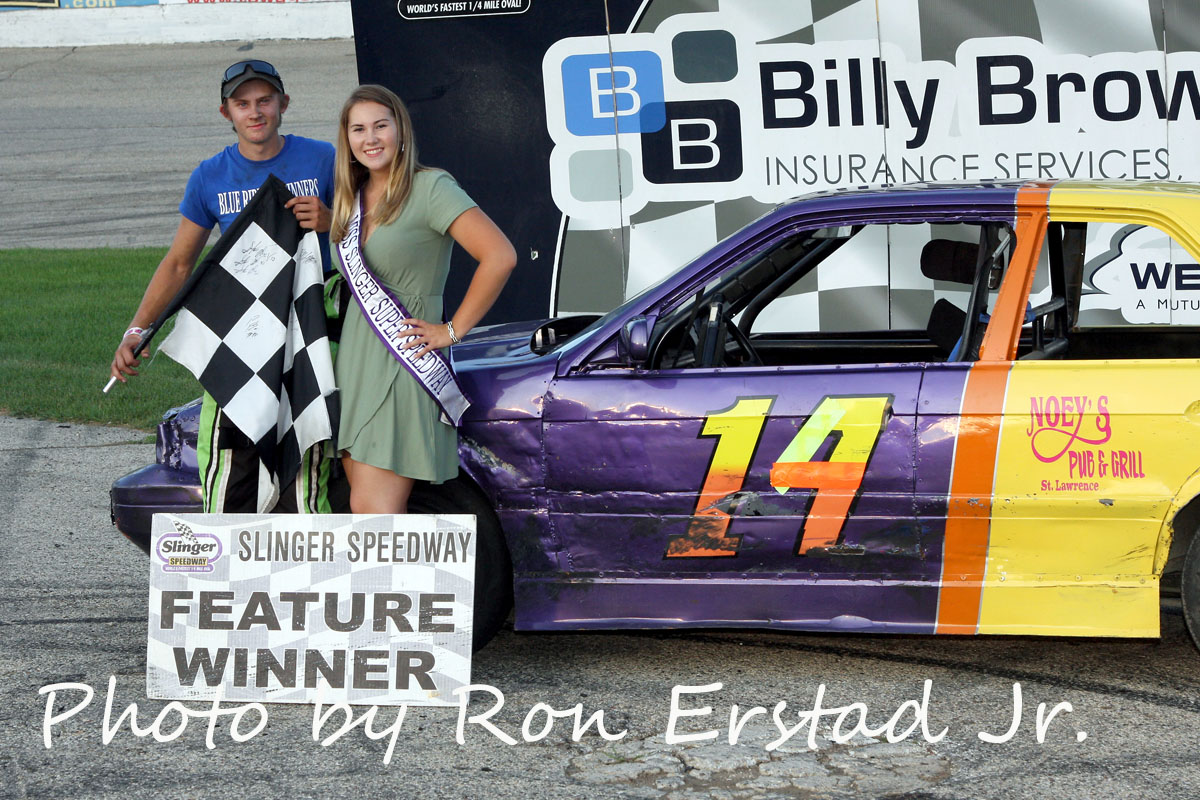 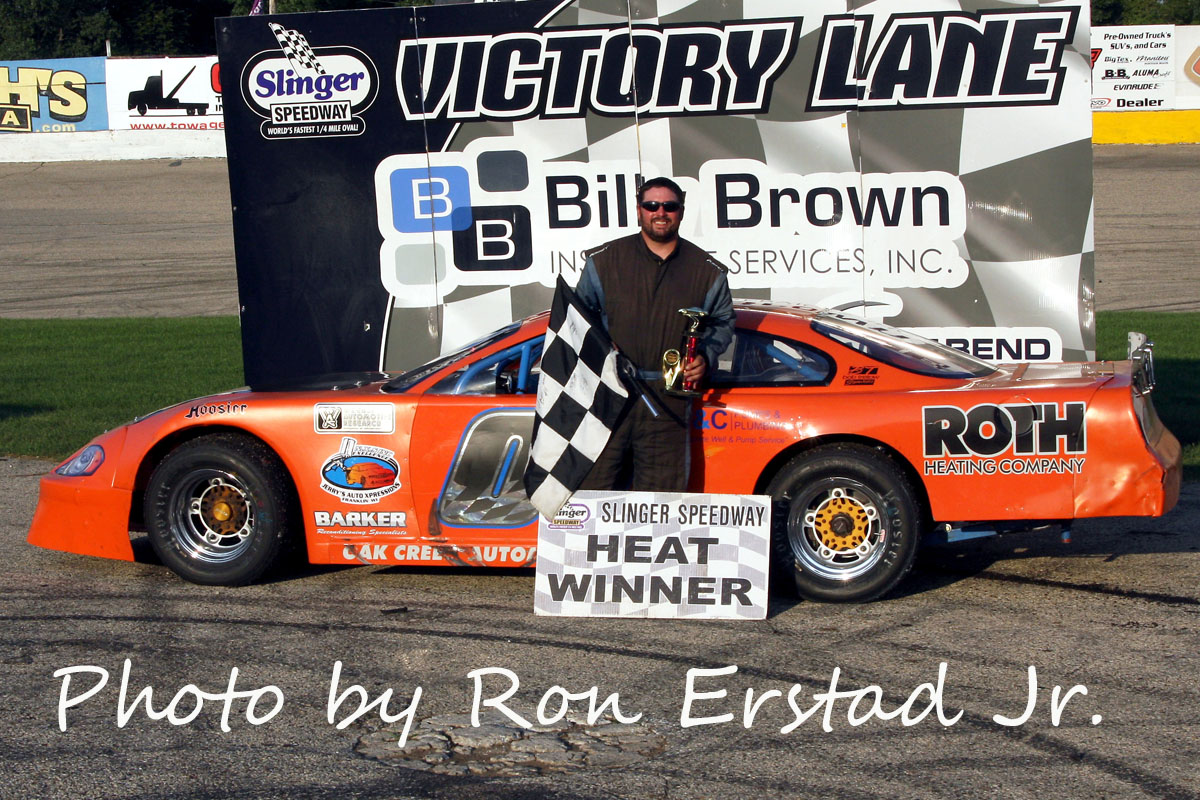 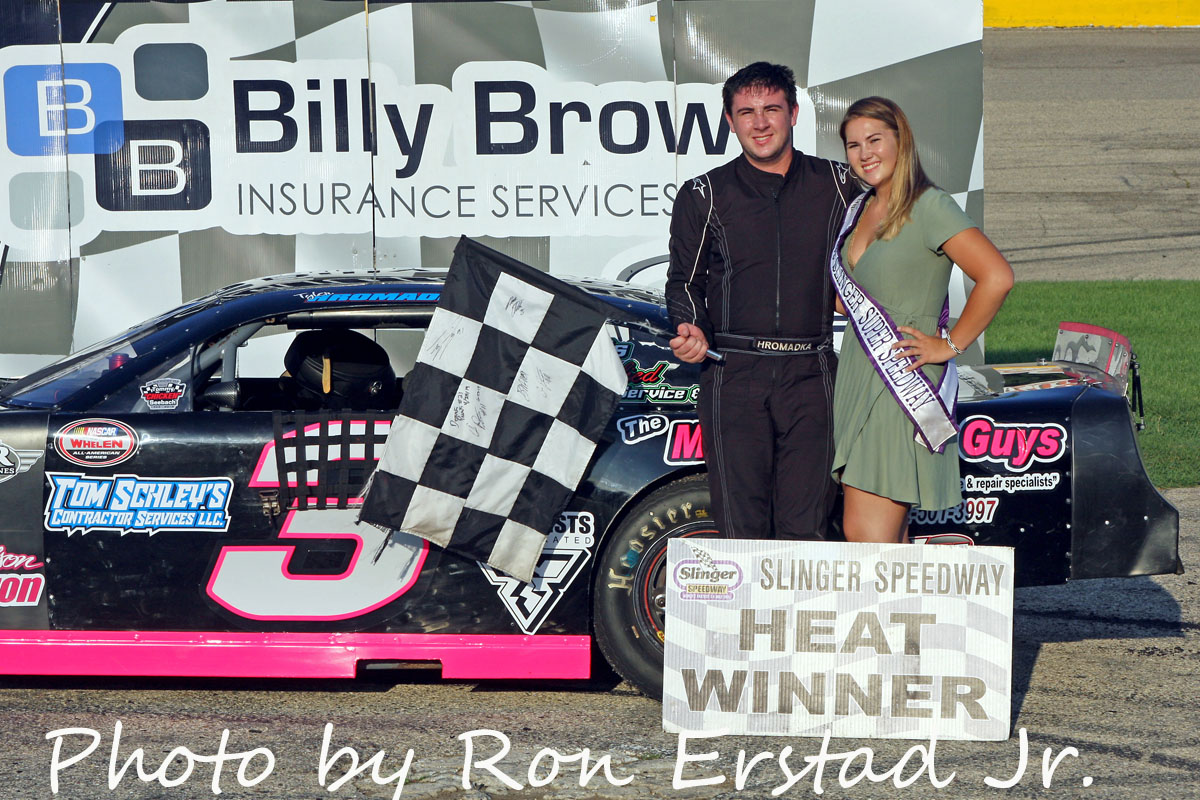 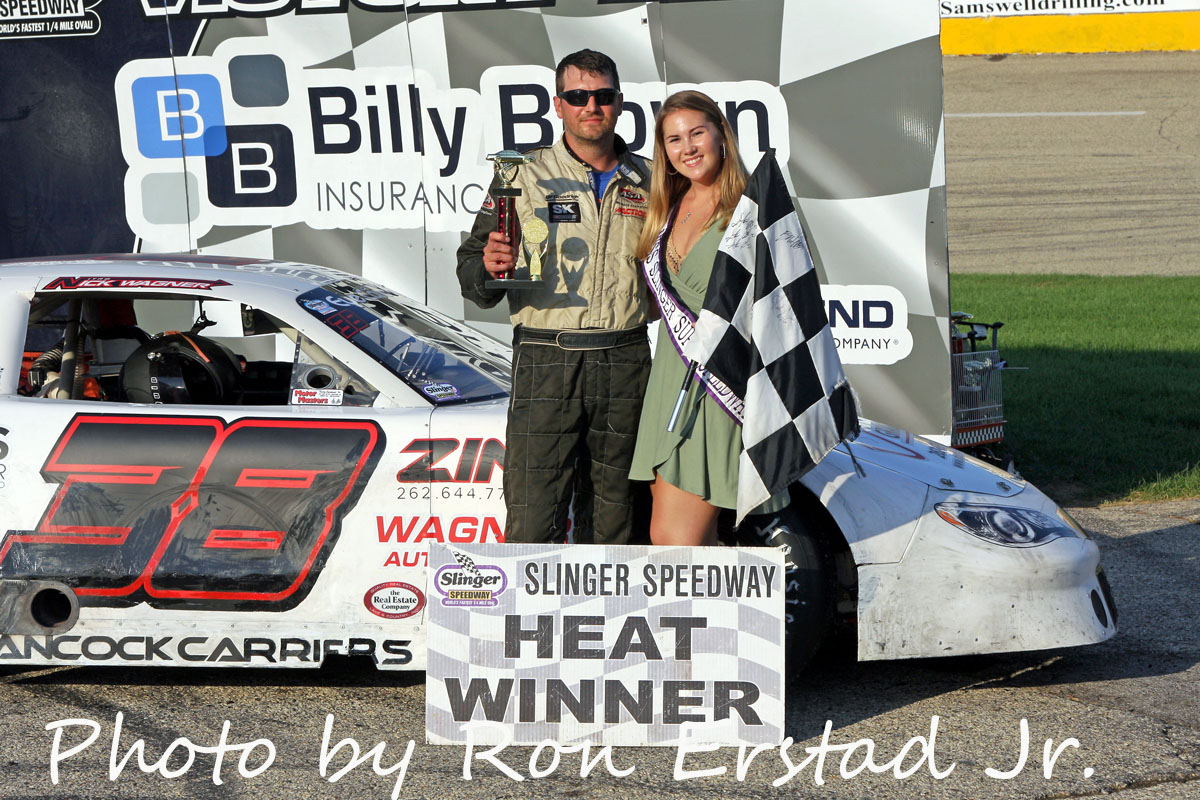