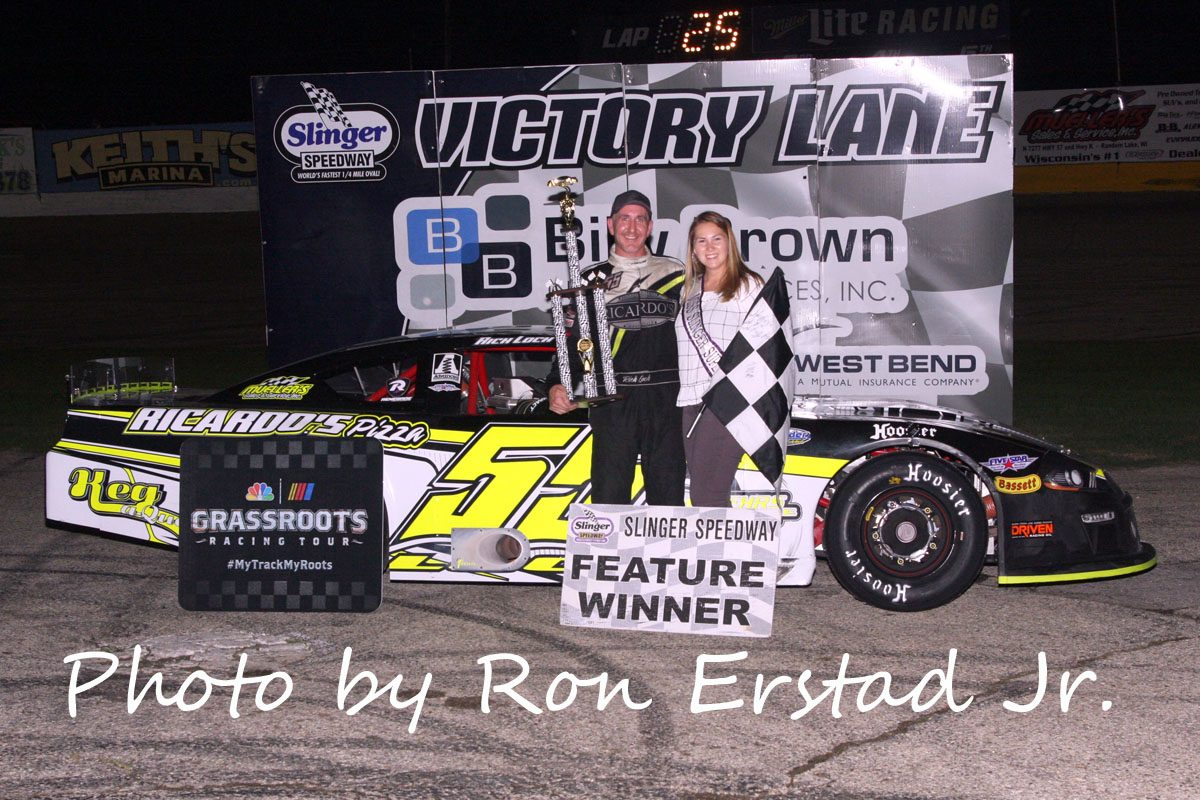 Slinger, Wis., Aug 11— For the past several years, anything that could happen seemed to happen to Rich Loch and his Loch Motorsports team, yet through personal loss, injuries, accidents, and heart-breaking mechanical failures, they continued to race week in and week out without a word of complaining.
That perseverance finally paid off Sunday night at the Slinger Super Speedway as Loch emerged from an intense four-car last lap battle with Brad Mueller, Alex Prunty, and Steve Apel to win the Oscar Mike Foundation 75-lap super late model feature.

“It feels like my first feature win, “ Loch said from victory lane after winning for the first time in several years, “Don’t look it up because I don’t want to know how long it’s been.”

“Brad (Mueller) and I have been racing against each other for a long time and it’s not the first time we have done that,” Loch continued describing the final 25-lap side-by-side battle with Brad Mueller while Alex Prunty and Steve Apel remained glued in their tire tracks, “It’s just been awhile since I got to do that and there is pretty much no other guy I’d like to run side-by-side with than Brad.”

“The car has been really good all year and we just haven’t got the finishes to show for it,” Loch continued, “When you don’t win for so long you just doubt yourself every week and I couldn’t have done this without my crew chief who comes down from Oshkosh every week and my Dad. This is the first feature I won since we lost my Mom and she was probably my biggest supporter out there so I think she was riding with us today.”

Loch spent the final 25-laps running the high groove while Brad Mueller occupied the lower lane as neither seemed to be able to gain an advantage while Alex Prunty and Steve Apel closed in right behind them. On the final lap Loch and Mueller remained door to door entering turn three and when Mueller bobbled slightly exiting turn four, Loch was able to streak to the victory. Alex Prunty was able to sneak past Mueller for second, leaving the recovering Mueller to finish third just ahead of a hard charging Steve Apel in fourth. Tim Lampman finished fifth for his second consecutive top five result.

“In the end there my car came to life,” Alex Prunty stated after his runner-up finish, “I had the best seat in the house for the last lap battle and I was really hoping Richie (Loch) could get rolling up top so we could slide to the front but we were able to get second there on the final lap.”

“If I couldn’t win tonight, how about Richie Loch…that was awesome,” Mueller told the crowd after finishing third, “I just got in too hot and got a little sideways but it is what it is, I led a lot laps again and just couldn’t capitalize on the win but we’ll just come back next week.”
R.J. Braun finished sixth followed by Grant Griesbach in seventh and Chris Blawat in eighth. Nick Wagner and Mark Eswein rounded out the top ten finishers.

R.J. Braun was the winner of the super late model fast dash and Steve Apel topped qualifying with a lap at 11.262 seconds.

Ryan Gutknecht scored his first feature win of the season in a similar thrilling finish to the 40-lap late model main event.

Gutknecht used the high lane to battle Jakob Hassler over the final two circuits as the pair traded the lead while fighting to control their cars as the raced for the win. On the final circuit Gutknecht used a strong drive off the fourth turn to secure the win, leaving Hassler to finish second. 76-year-old Jerry Eckhardt rounded out the podium with a late charge to finish third while Jacob Hassler took the checkered flag right behind him in fourth and just ahead of Jerry Mueller in fifth.

Brian Holtz and Tom Berens were the winners of the late model heat races and Tyler Schley set fast time at 12.126 seconds.

Scott Ascher made an appearance on the Slinger high banks and he drove to the victory in the 30-lap sportsman feature. Andrew Meyerhofer finished second while Jacob Schraufnagel, Paul Wagner, and Jay Kalbus finished third through fifth respectively. Jimmie Evans and Scott Ascher each scored wins in a sportsman heat race while Bobby Gutknecht was the fastest qualifier at 12.753 seconds.

Brandon Johnson won the Bar Car race driving the Sheryl’s Club 175 entry while Carl Trapp bested a field of ten spectator racers to win in his 2016 Chevy Corvette. Bill Shavlik took top honors in the Figure 8 race to close out the evening. 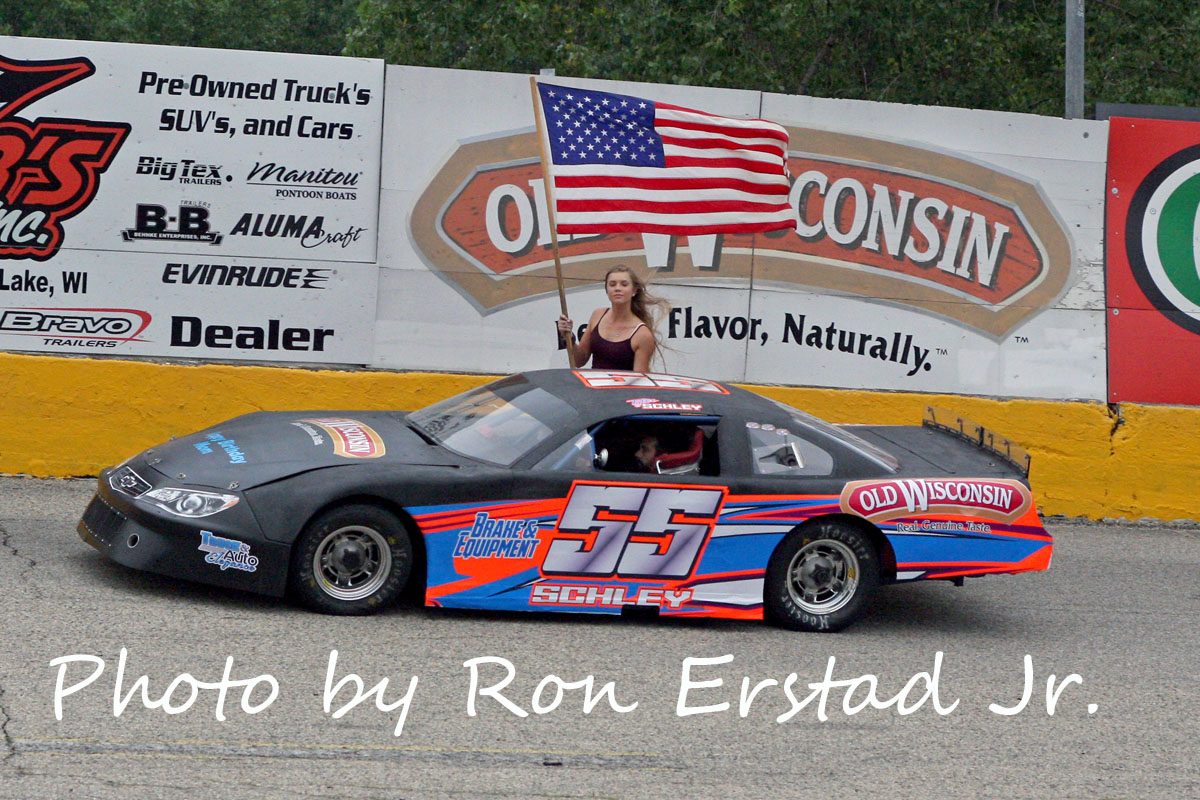 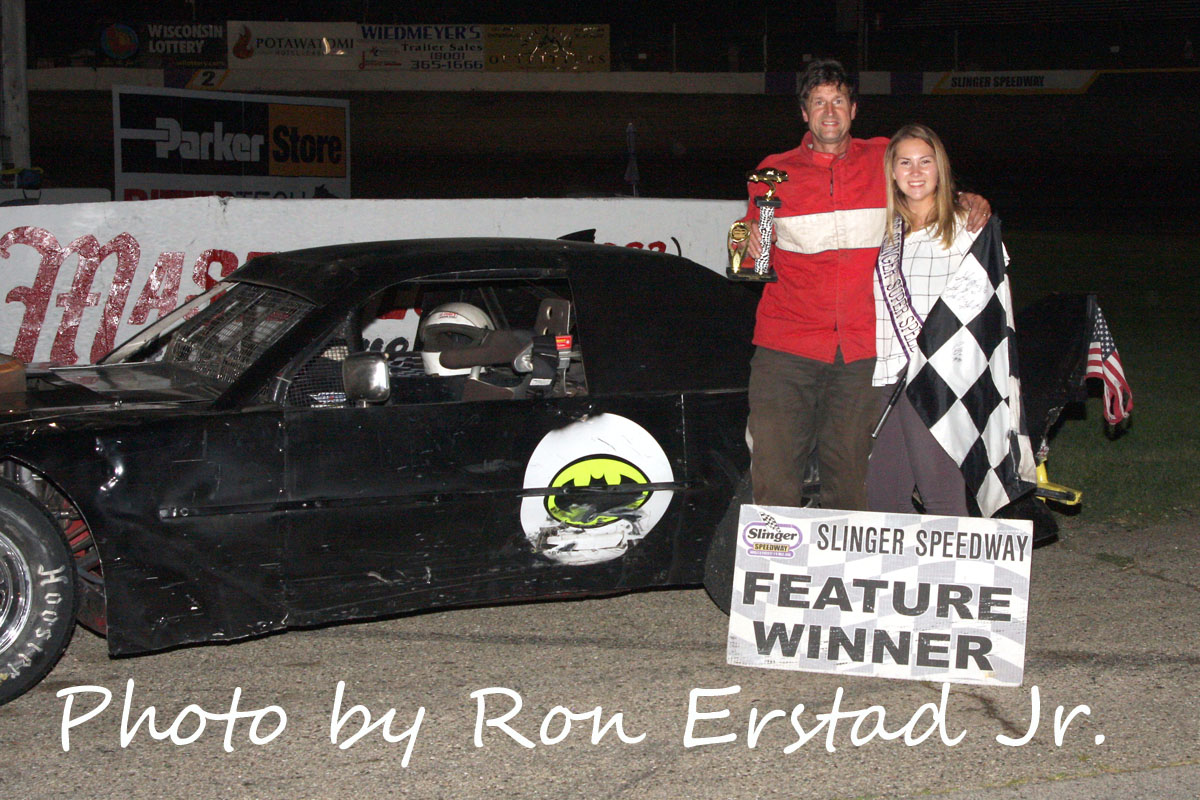 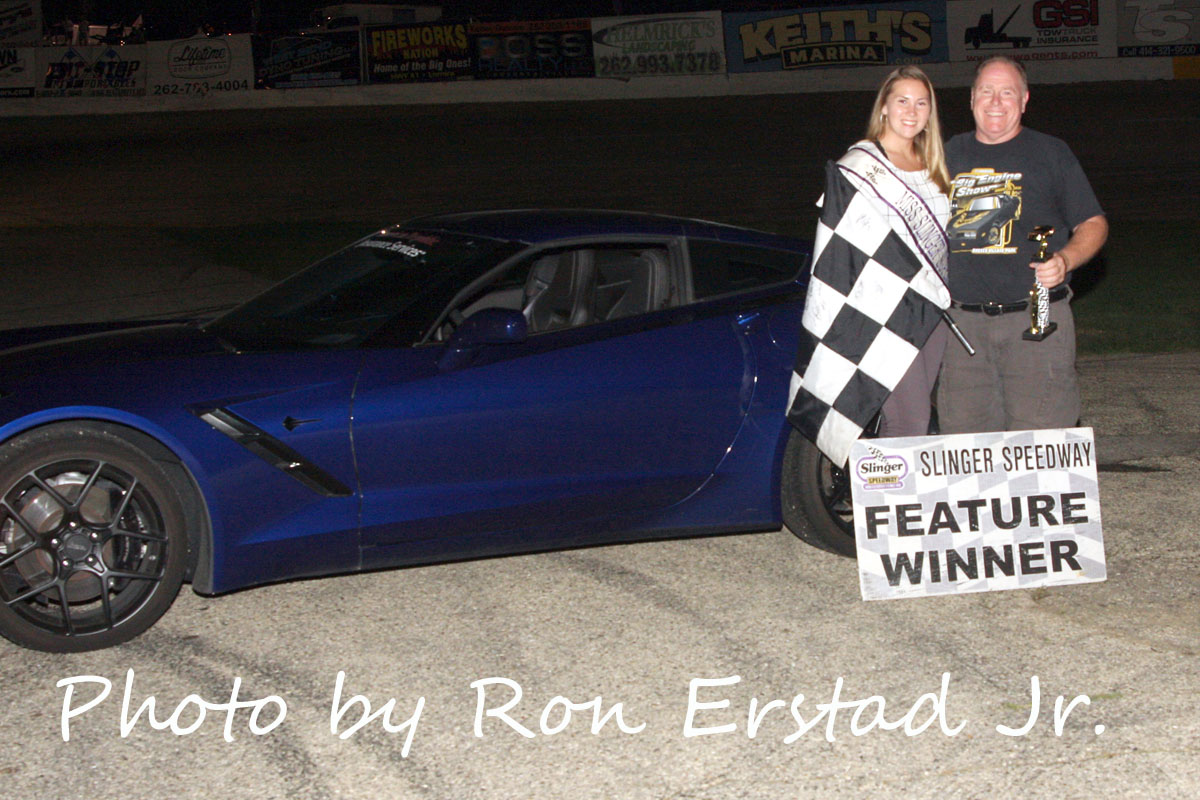 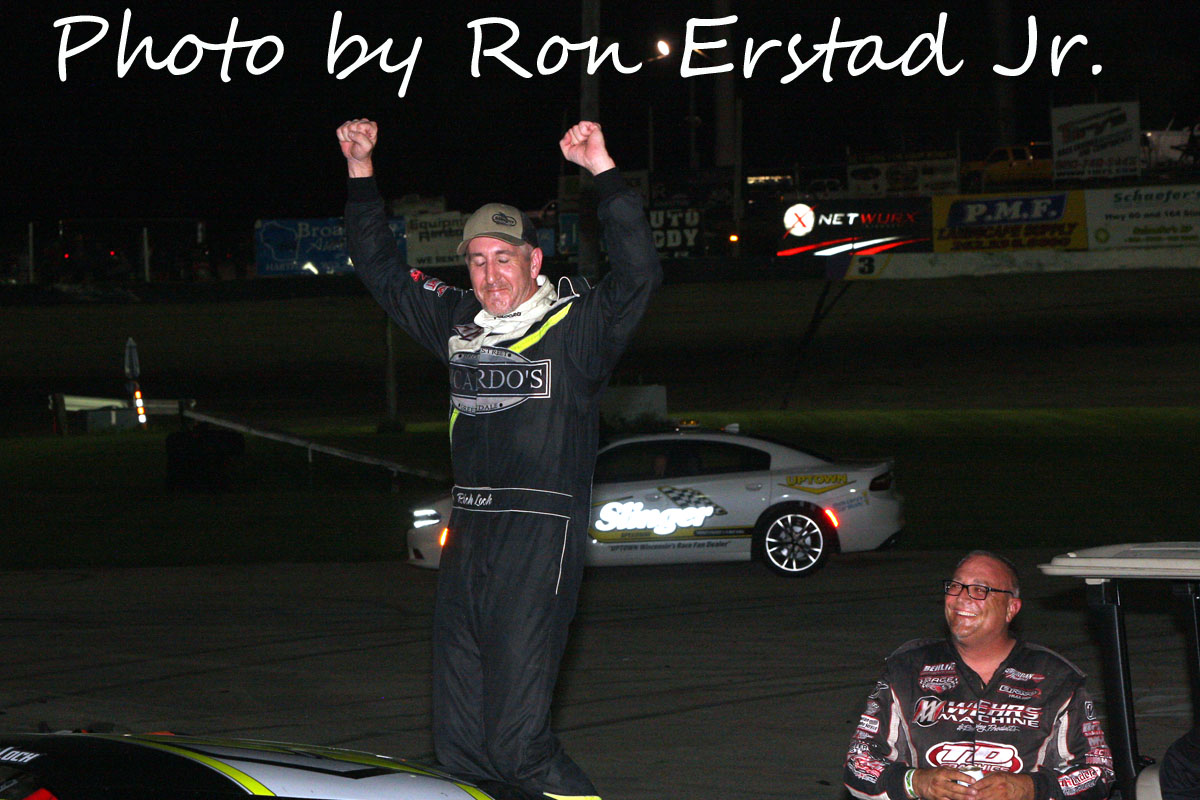 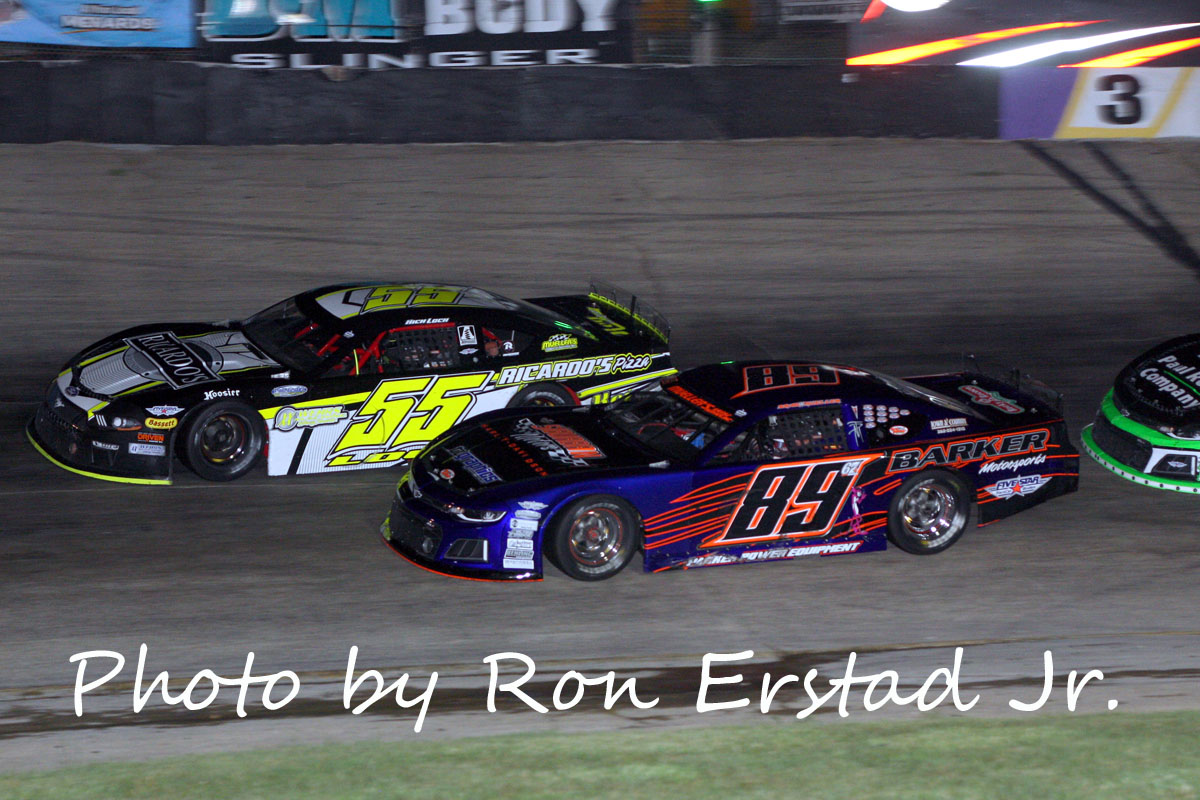 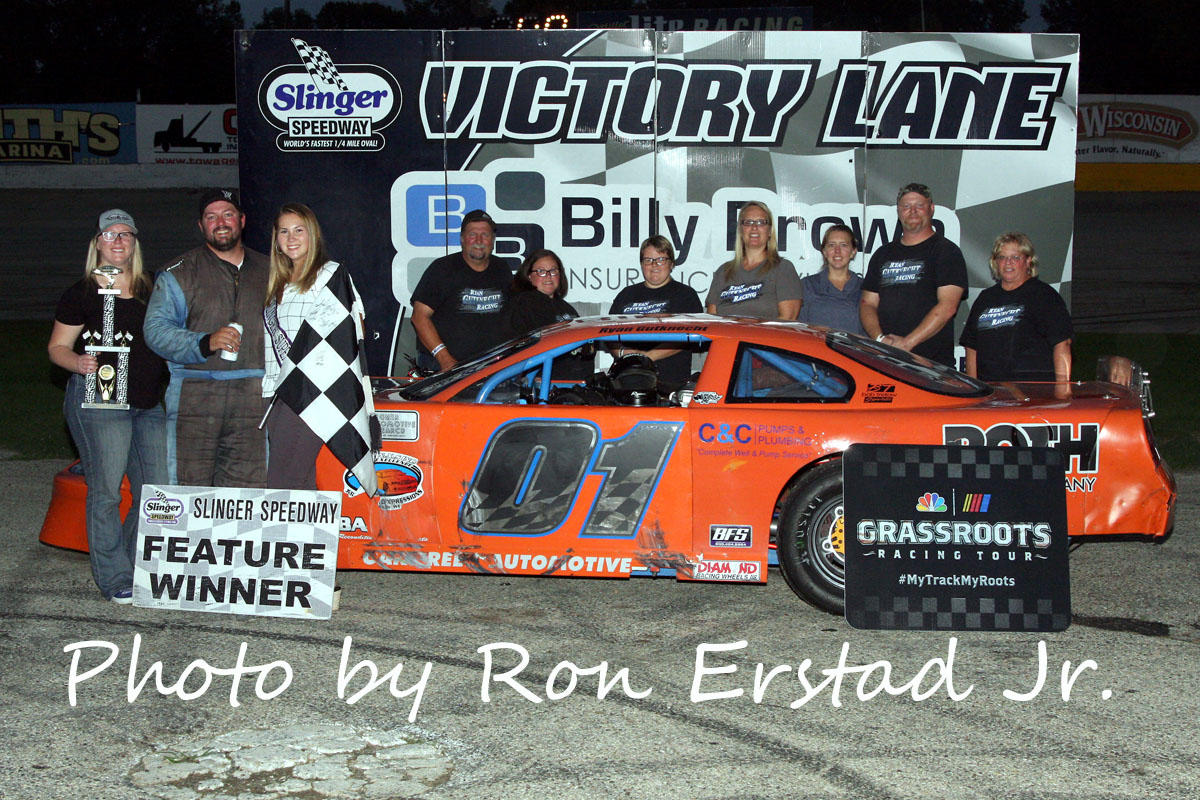 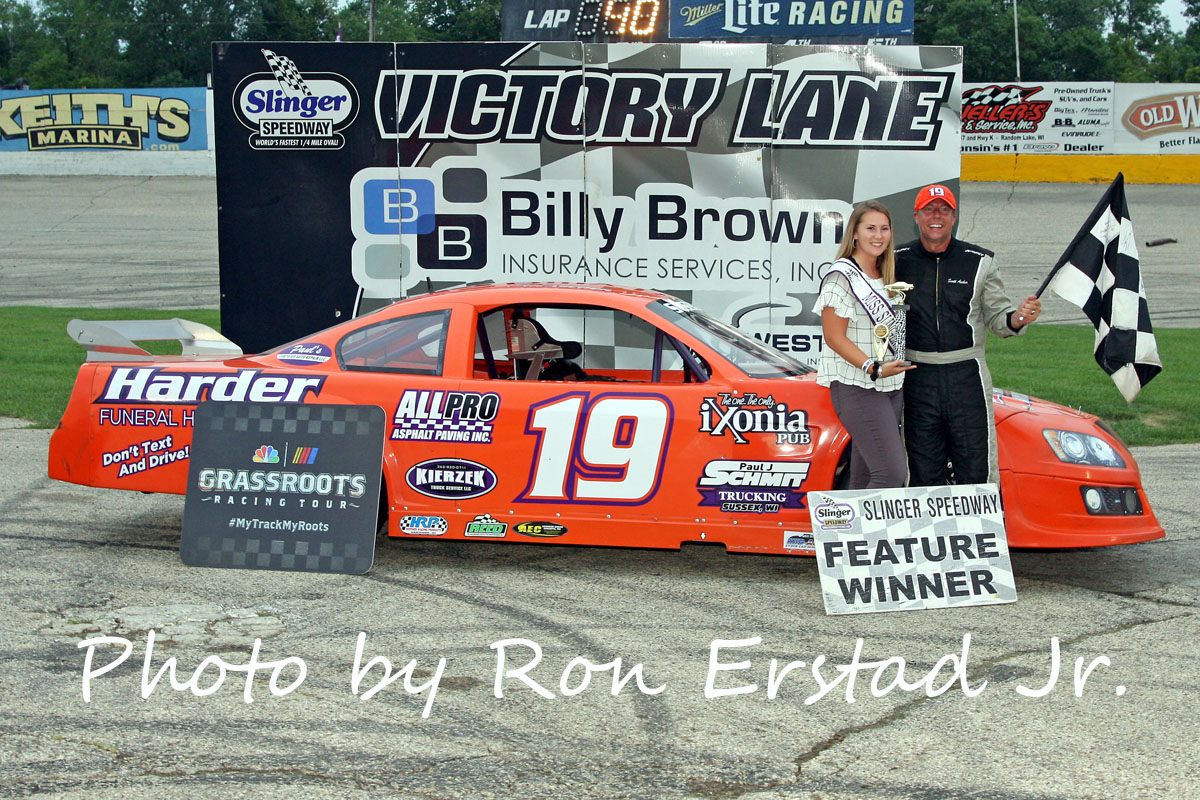 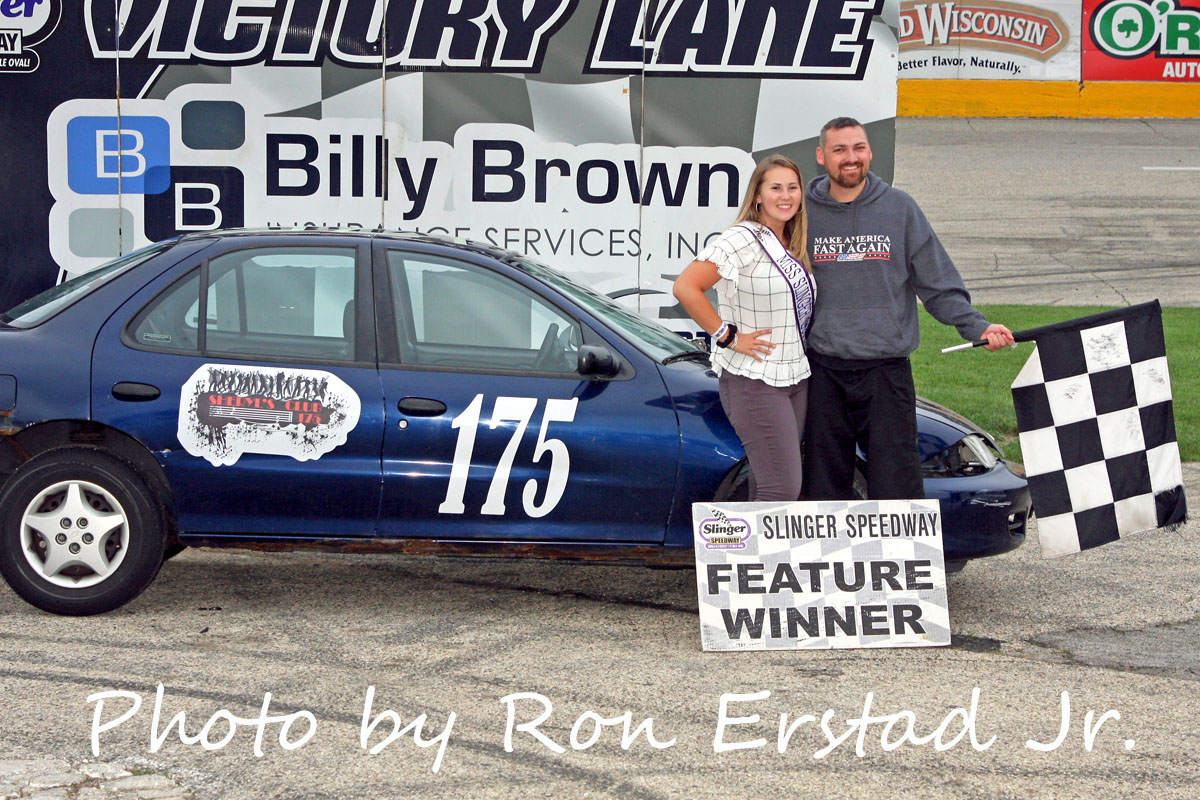 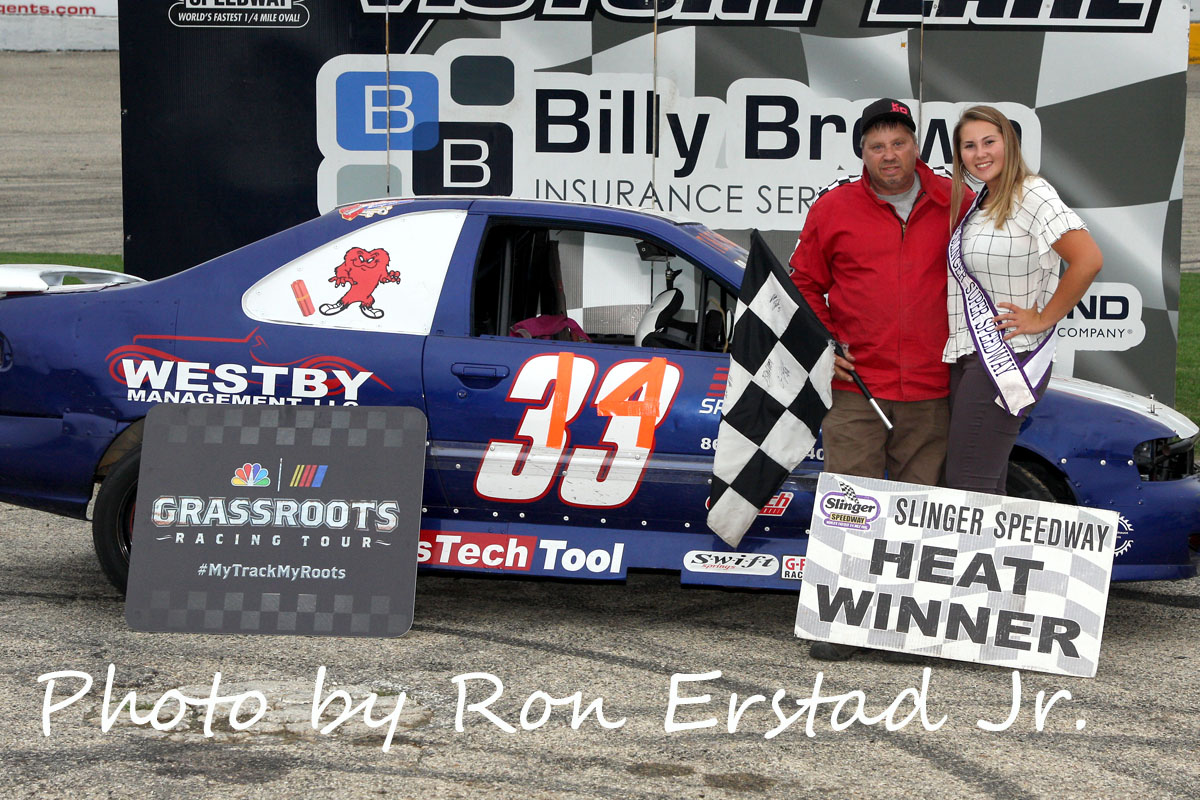 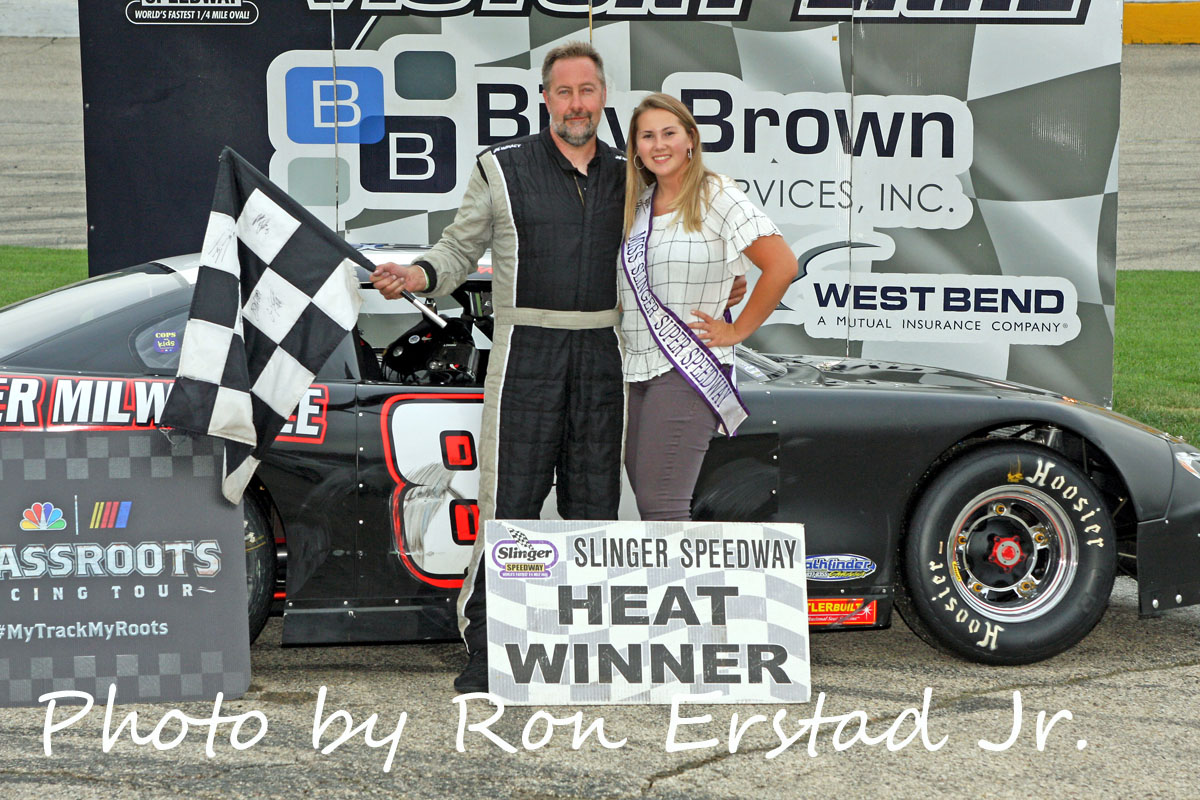 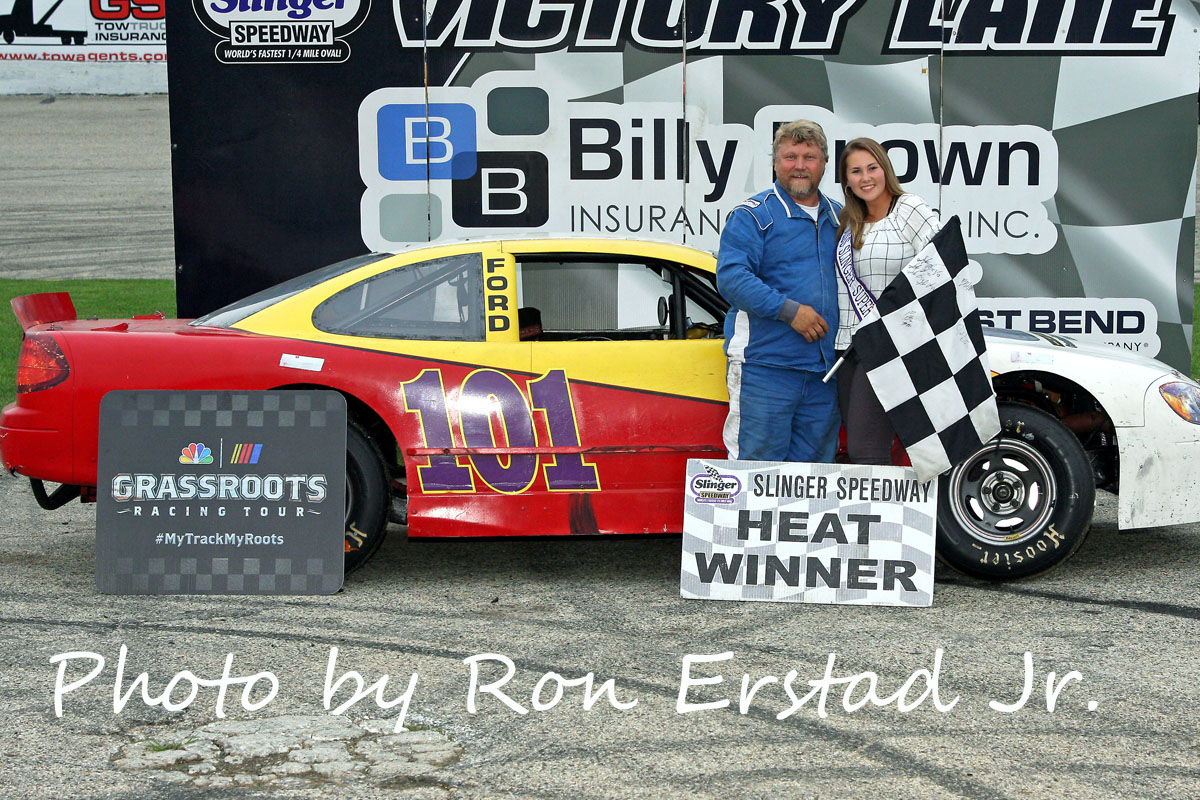 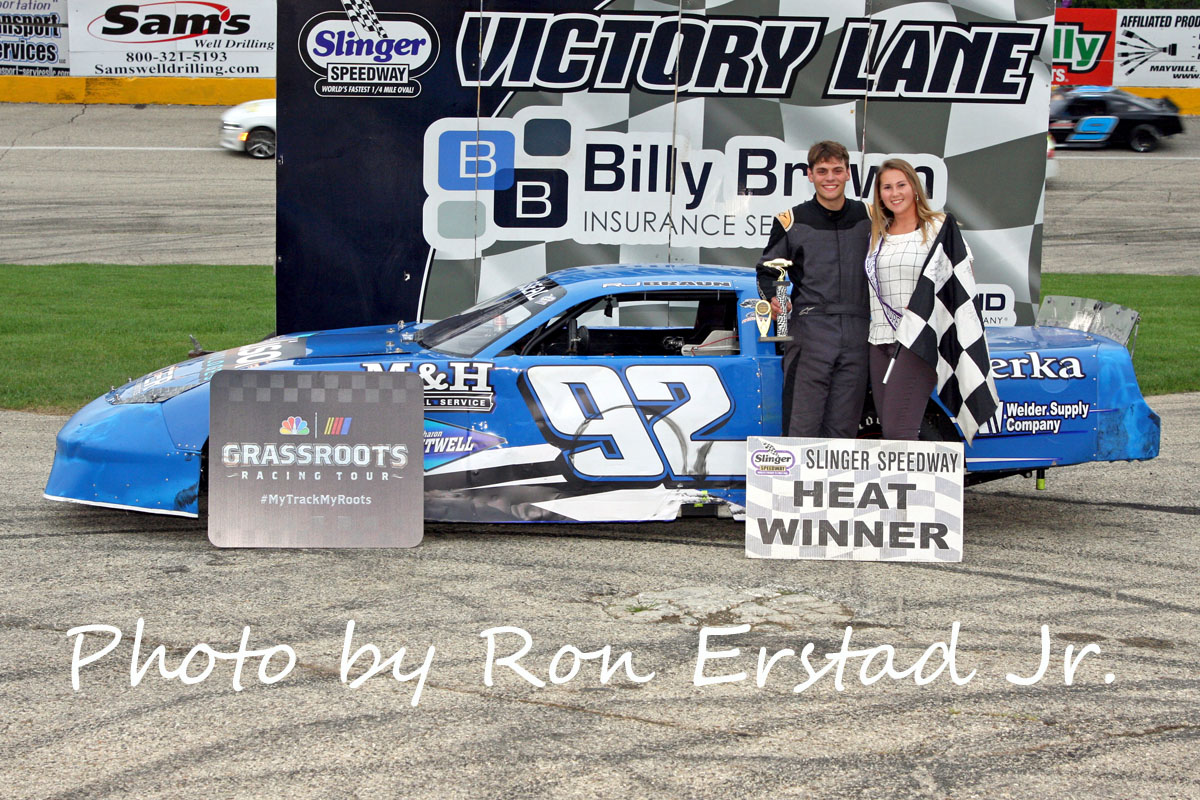 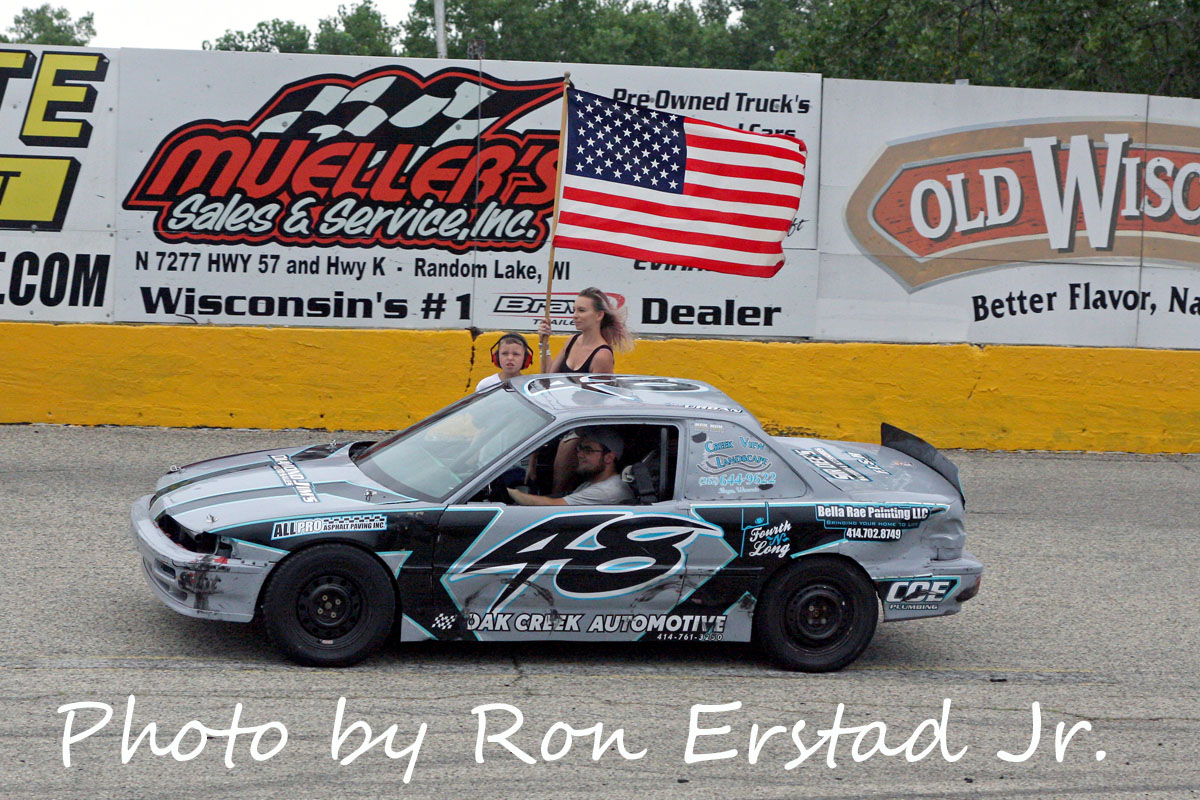 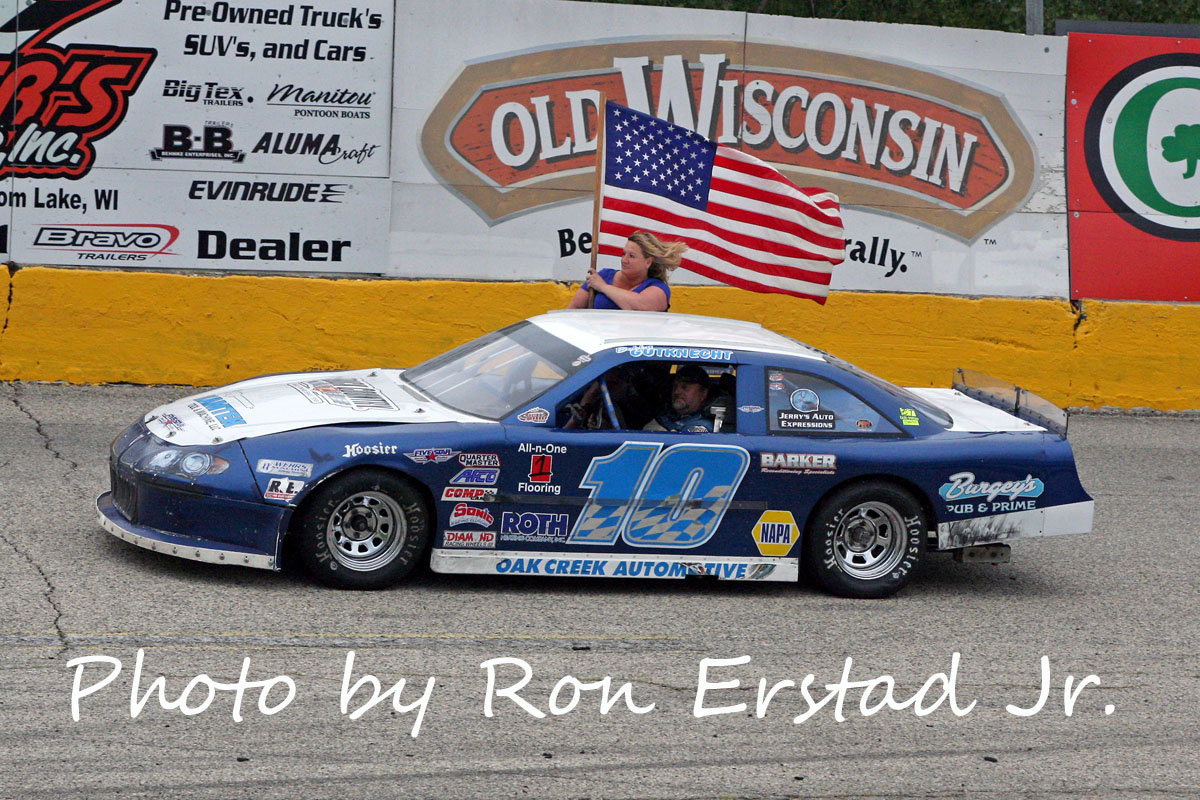