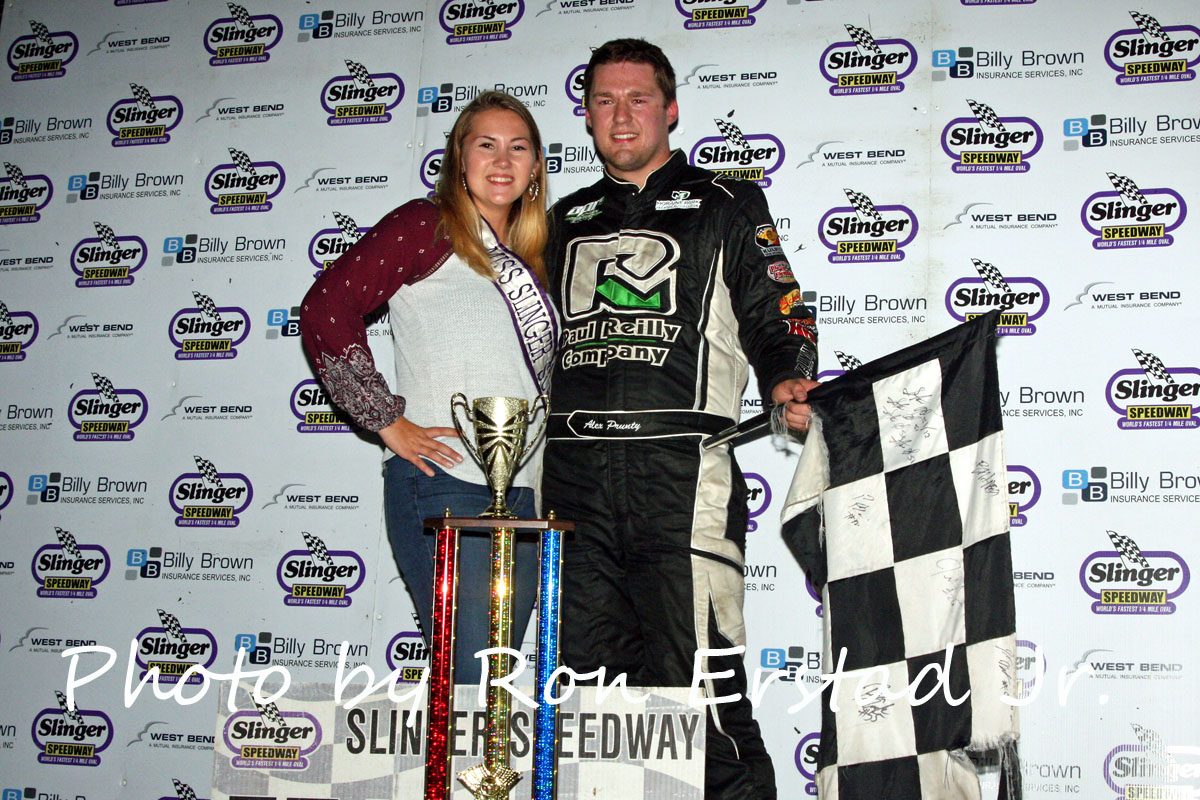 Slinger, Wis., Aug 25—The box score shows Alex Prunty nearly led every lap of the Race for Autism Awareness 75-lap super late model feature Sunday night at the Slinger Super Speedway but the victory was anything but easy as he had to fend off numerous challenges from Brad Mueller before taking the checkered flag.

“The track was really tight during practice and my team made a great adjustment after qualifying,” Prunty said from victory lane, “It was the first time we missed the fast dash all year so we didn’t get to see if the changes worked but they sure did.”

“I was going all out,” Prunty continued describing the multiple laps he ran side by side battling for the lead with Brad Mueller, “I had a blast racing with such a clean guy like Brad and we ran side by side for a majority of the laps without touching and that seems to be the motto at Slinger this year…clean racing,”

“I think my car might have grew stagger after that last restart,” Brad Mueller explained following his third consecutive runner-up finish, “It ran free and I couldn’t get off the corner the way I wanted to and Alex was real good on the top.”

“Ever since they sprayed the top, it’s been pretty hard to pass on the bottom, “ Mueller continued referring to the traction compound being placed in the upper lane of the speedway to open up an outside groove, “Maybe next week they’ll spray the bottom but my crew doesn’t give up, my car owner doesn’t give up, my family doesn’t give up and there is no better place to race than Slinger Speedway.”

Alex Prunty and R.J. Braun led the field to the green flag and the inside lane proved to be advantageous in the early going as Prunty and third-starting Steve Apel charged to the top two spots using the low groove. Conrad Morgan filled the third spot and Brad Mueller moved to fourth as the outside lane starters, Braun and Brad Keith raced for fifth. The caution flag waved early on lap four when Keith’s car looped around off turn four and Prunty chose the high lane for the restart. Steve Apel fought for the lead valiantly for a few laps in the inside lane but could never clear Prunty who was able to maintain the top spot from the outside. The upper groove eventually prevailed and Brad Mueller and Grant Griesbach both used it to pass Apel and take over second and third respectively. Conrad Morgan held the fifth spot just ahead of Rich Loch as farther back Brad Keith began to march forward from deep in the field. Mueller took a few stabs at the lead from the inside but each time Prunty was able to fend him off while Griesbach and Apel looked on. The caution flag waved again on lap 26 when R.J. Braun’s and Brad Keith’s cars hooked together in turn one and slid into the wall.

As racing resumed, the top four raced in two by two formation with Mueller edging Prunty for the lead barely on one lap before Prunty regained the advantage off the corners on the next while Apel and Griesbach remained side by side in their tire tracks. Prunty eventually cleared Mueller for sole possession of the top spot while Griesbach moved ahead of Apel for third. As the laps wound down, Conrad Morgan had the fastest car on the track and he ran down Apel to take fourth and followed that up by muscling his way around Griesbach for third a few laps later. As the leaders worked lapped traffic, Morgan was able to close in but time was running out with Prunty maintain the lead over Mueller. Prunty drove to the victory ahead of Mueller while Morgan finished a strong third. Apel took the checkered flag in fourth while Rich Loch used a late surge to finish fifth while Griesbach experienced a mechanical issue and left the track on the final lap. Nick Wagner finished sixth followed by Mike Held and Tim Lampman in seventh and eighth respectively. Chris Blawat and Jacob Vanoskey rounded out the top ten.

Steve Apel won the super late model fast dash and Brad Mueller blistered the speedway in qualifying by turning in a lap at 11.190 seconds to become the fastest qualifier.

Nottestad and Jack Stern fought side by side for the lead in the final laps with Stern on the inside and Nottestad working the outside. With two laps to go, Stern’s car bobbled slightly in between turns three and four and when contact was made with Nottestad’s car, it spun around to set up a green, white, checkered finish. Stern utilized the “tap out” rule in effect taking blame for the incident and allowing Nottestad to retain his position, which was the lead, for the restart. During the final two laps, second-running Jerry Mueller appear to suffer a tire issue and the field scattered as he fought to control his car, allowing Nottestad to drive away out front. Nottestad took the victory while Ryan Craine sliced his way through the chaos to finish a career-best second place while Zach Prunty also scored a career-best finish in third. Brian Holtz crossed the finish line in fourth place followed by Tom Berens in fifth.

The hobby stock class from the Jefferson Speedway competed at Slinger for the first time this season as part of a special two-day event and Phillip Wuesthoff won the 25-lap feature over Chris Flairty and Scott Riedner. Jim Tate Jr. finished fourth and Christian Janssen was fifth. Jordan Egli won the first hobby stock heat race and Phillip Wuesthoff won the second heat race in a photo-finish with Scott Riedner. Jared Vike was the fastest qualifier with a lap at 13. 851 seconds which was a new track record. 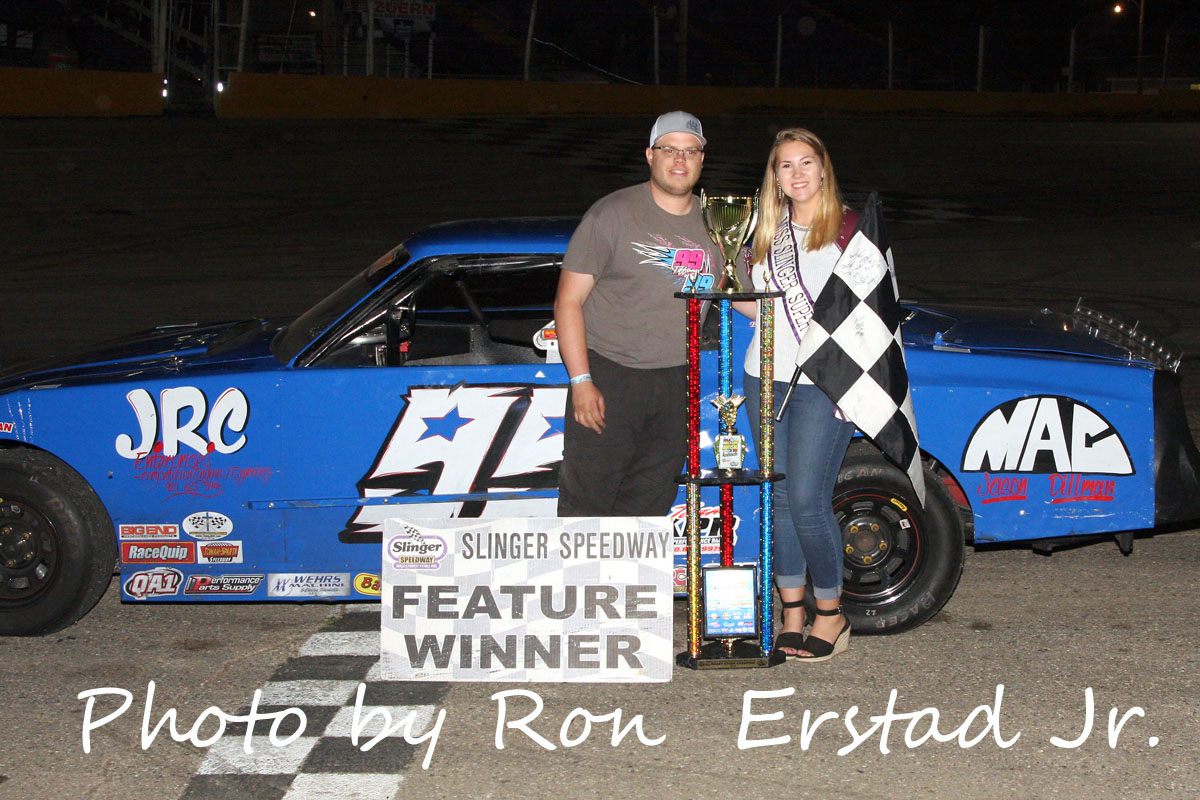 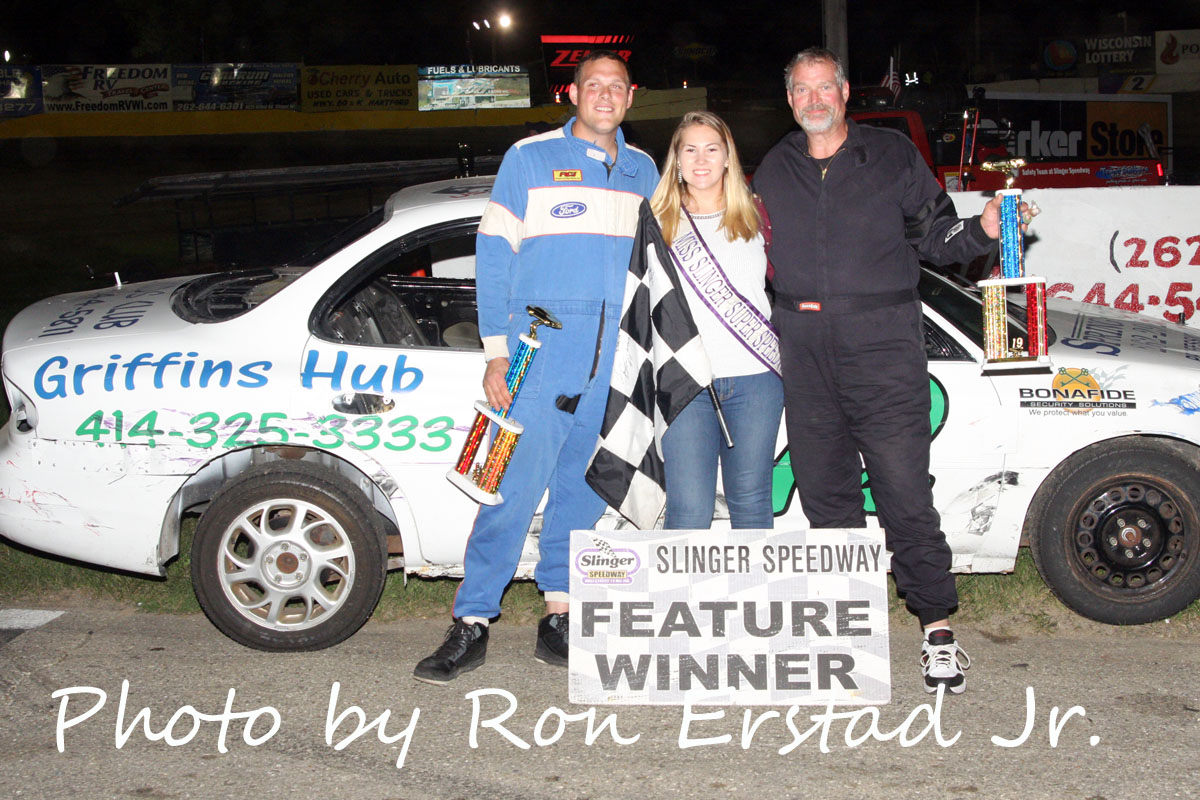 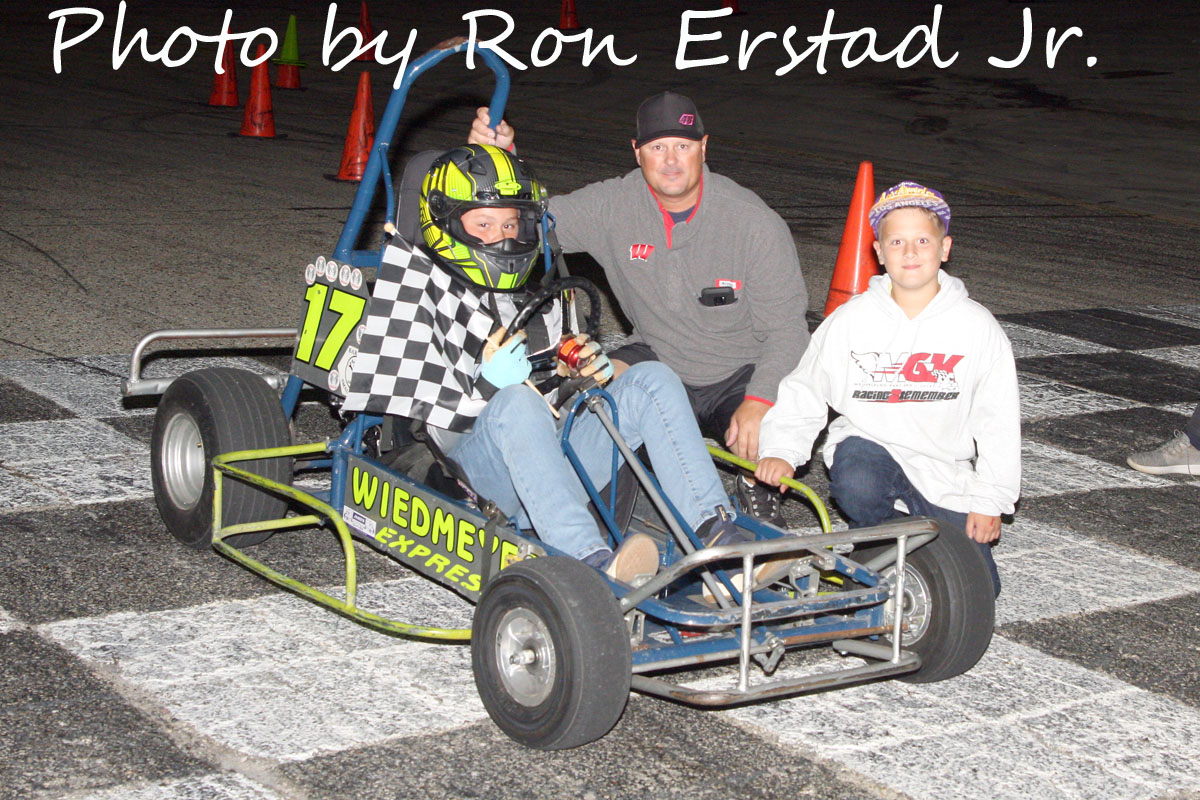 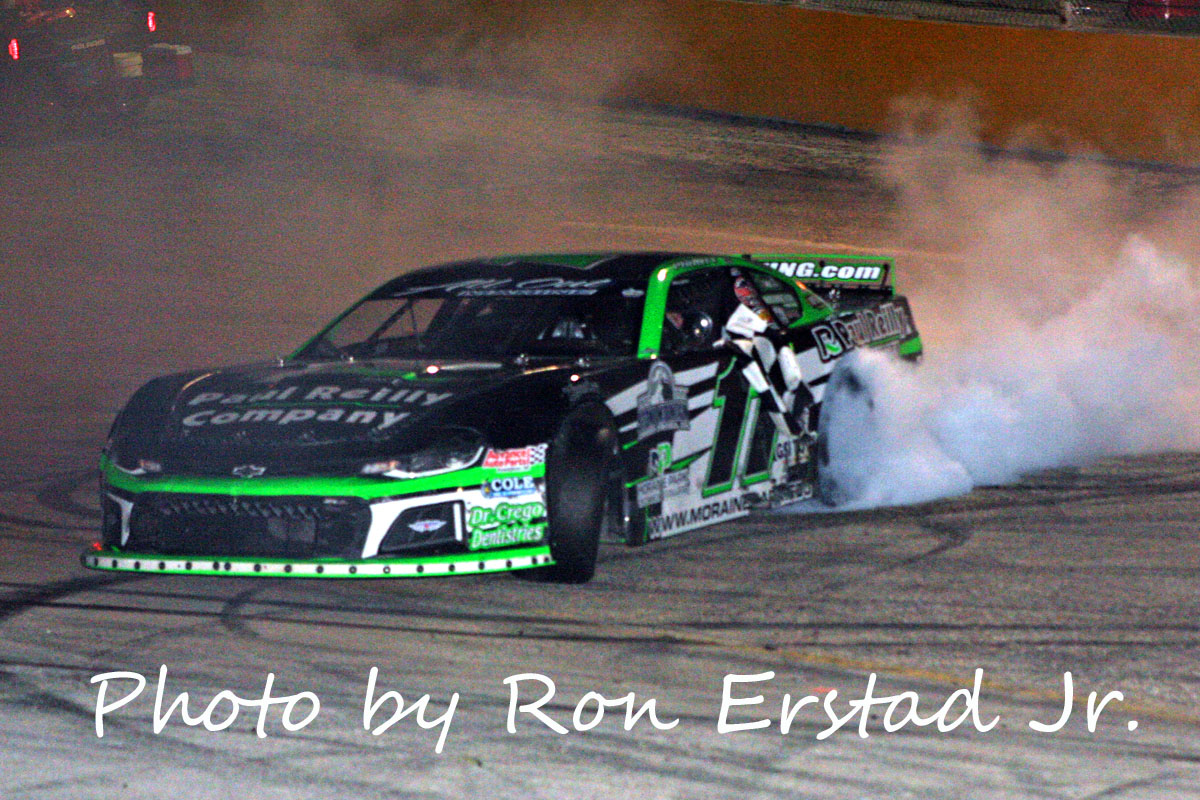 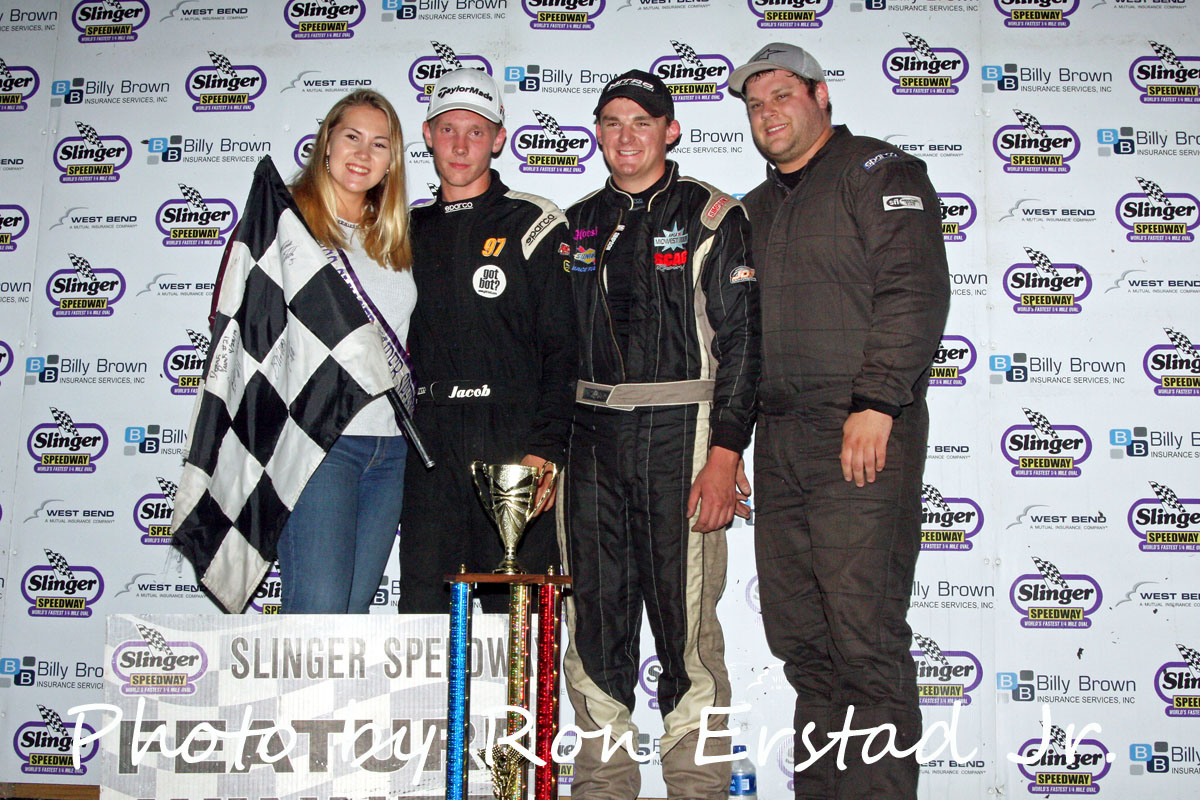 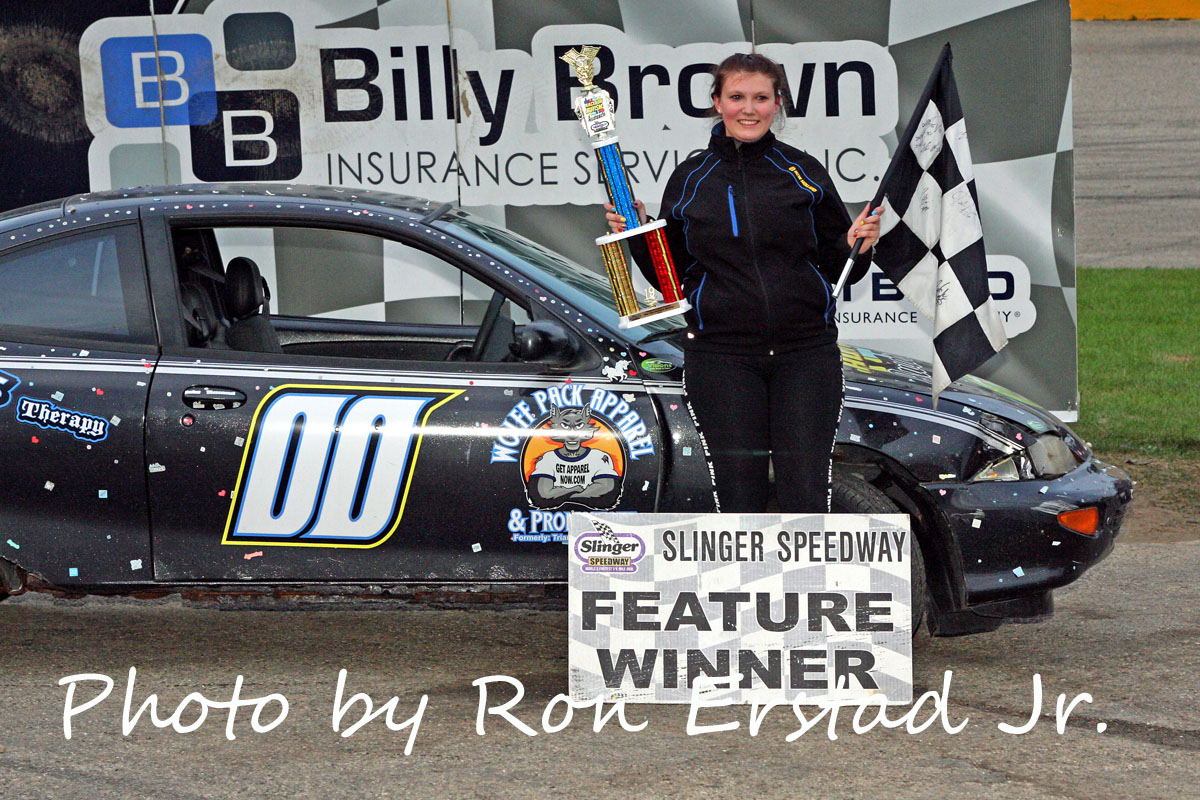 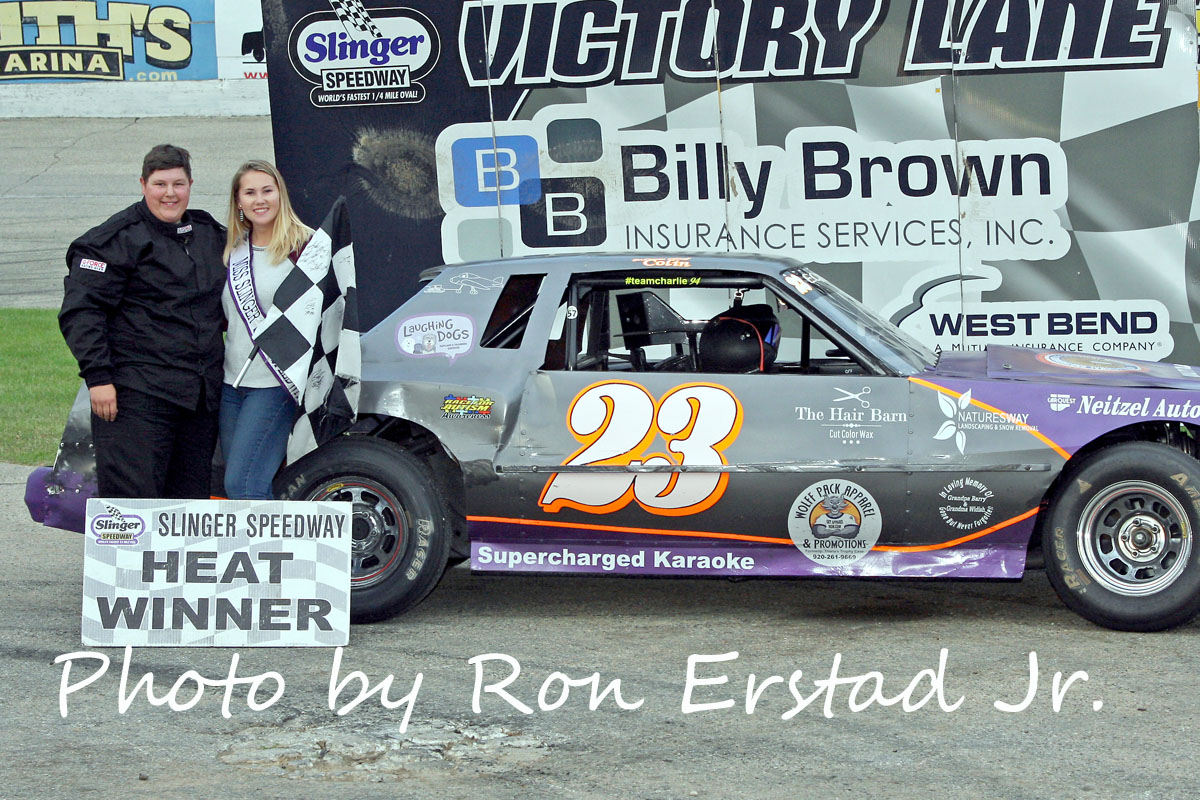 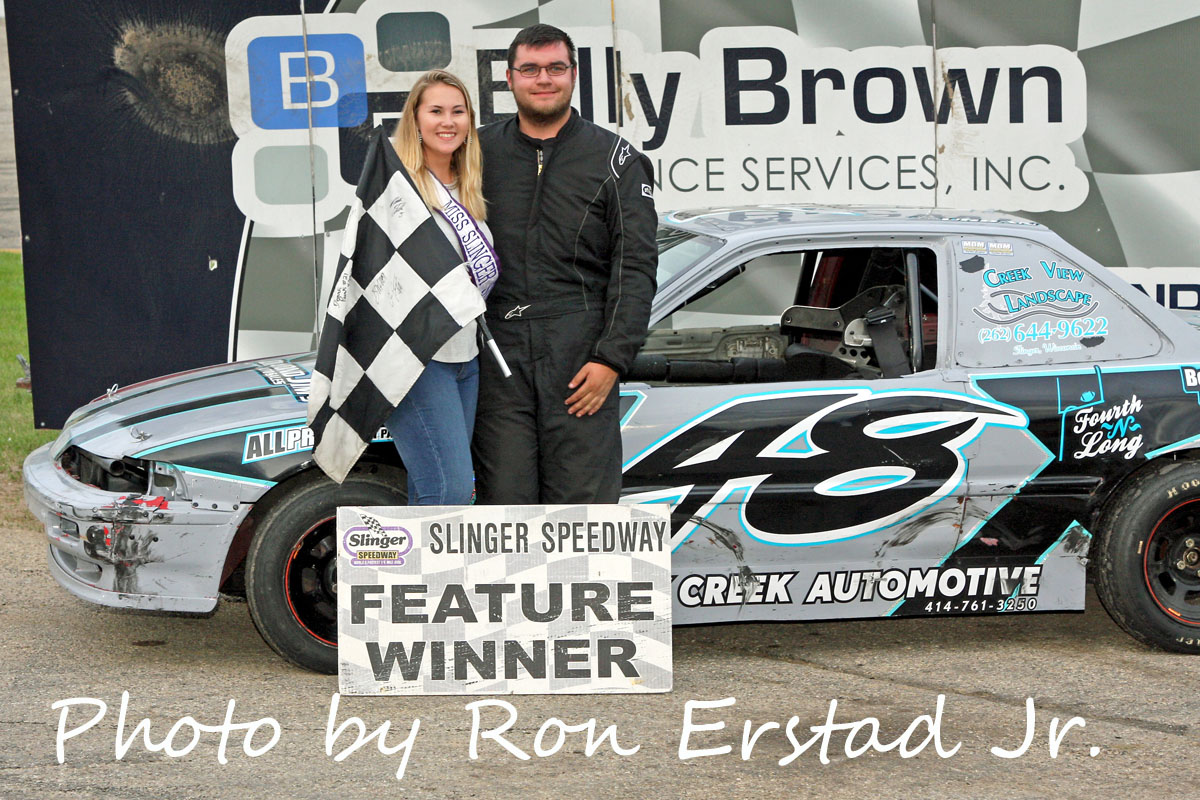 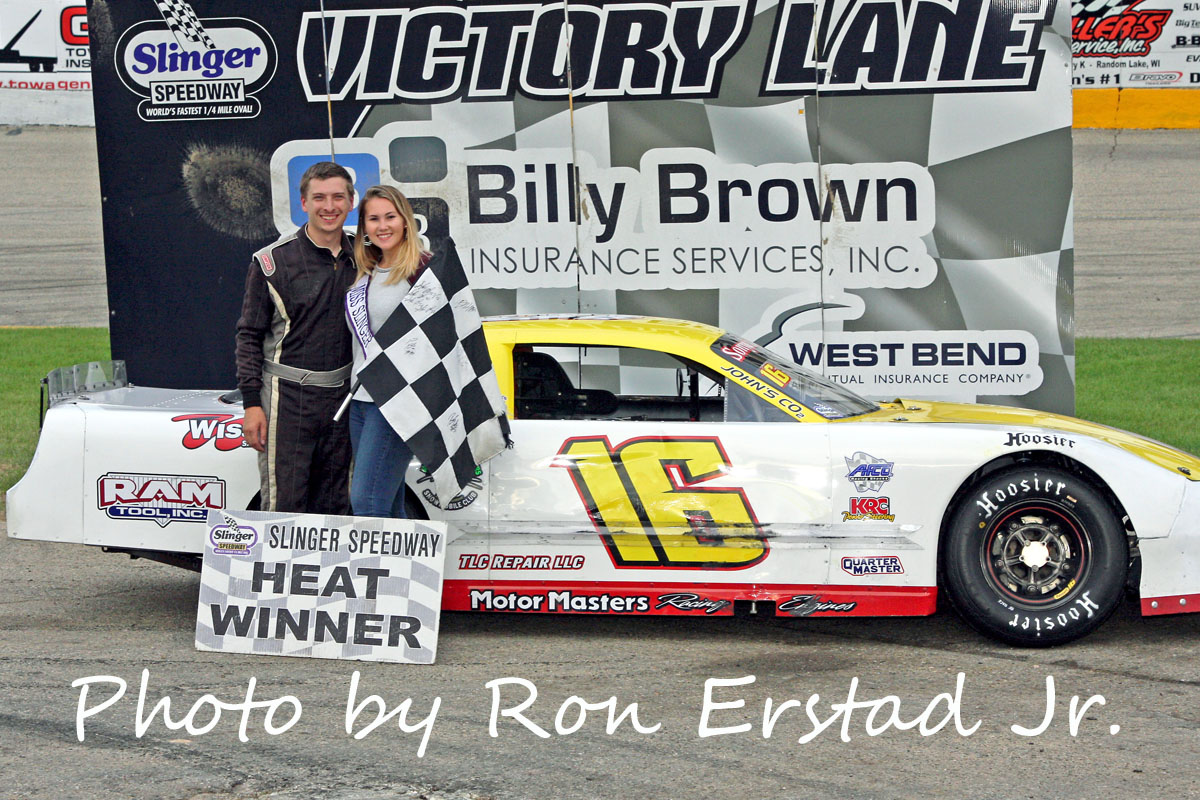 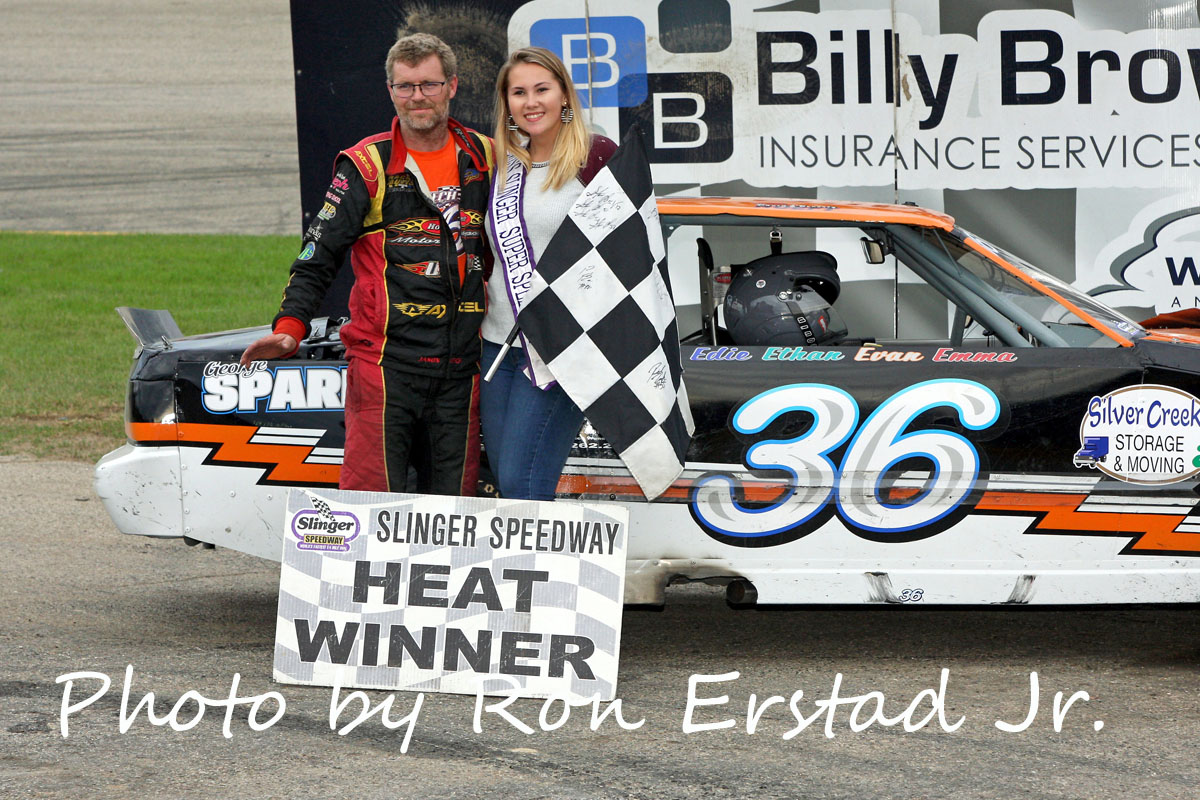 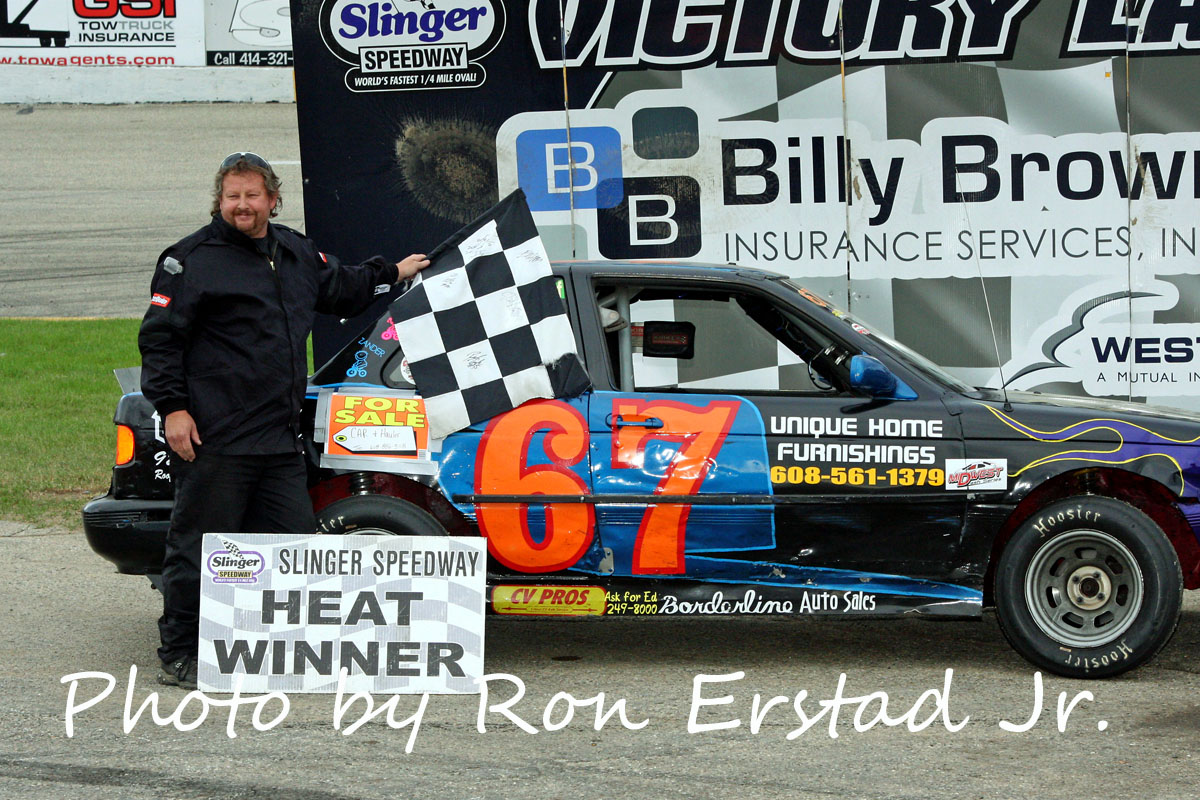 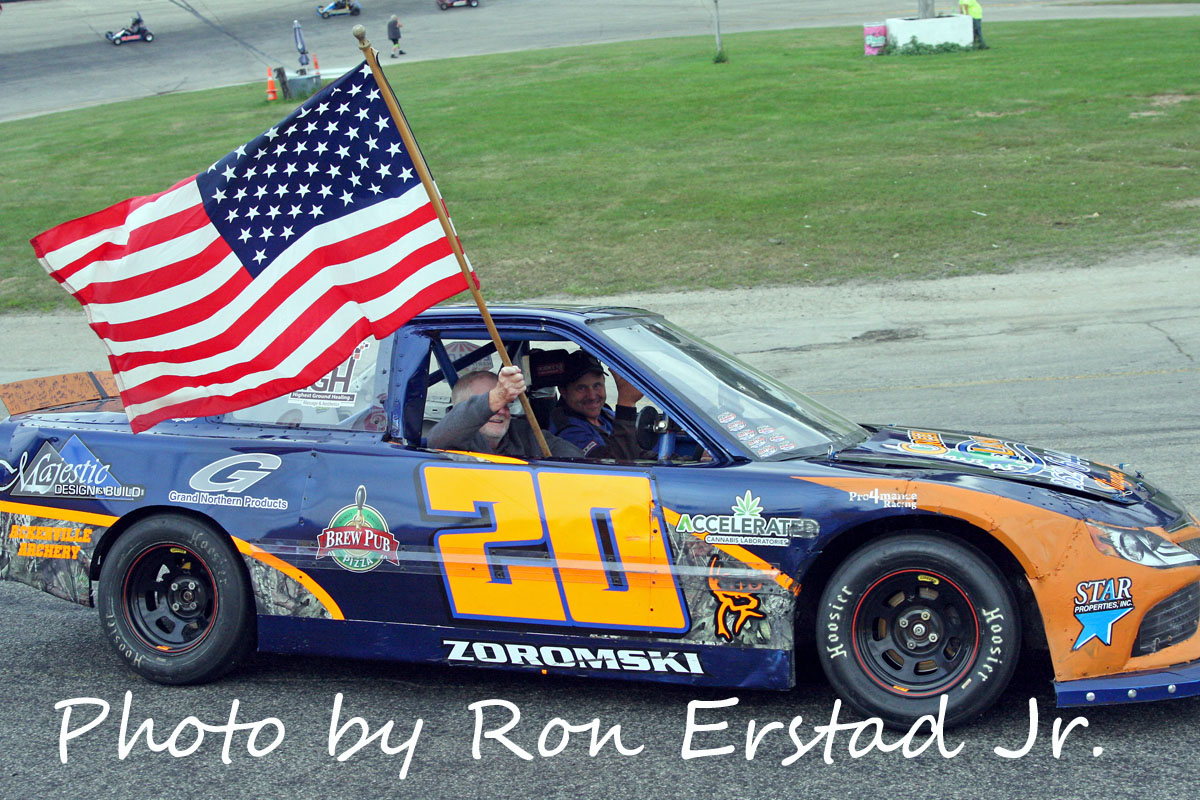 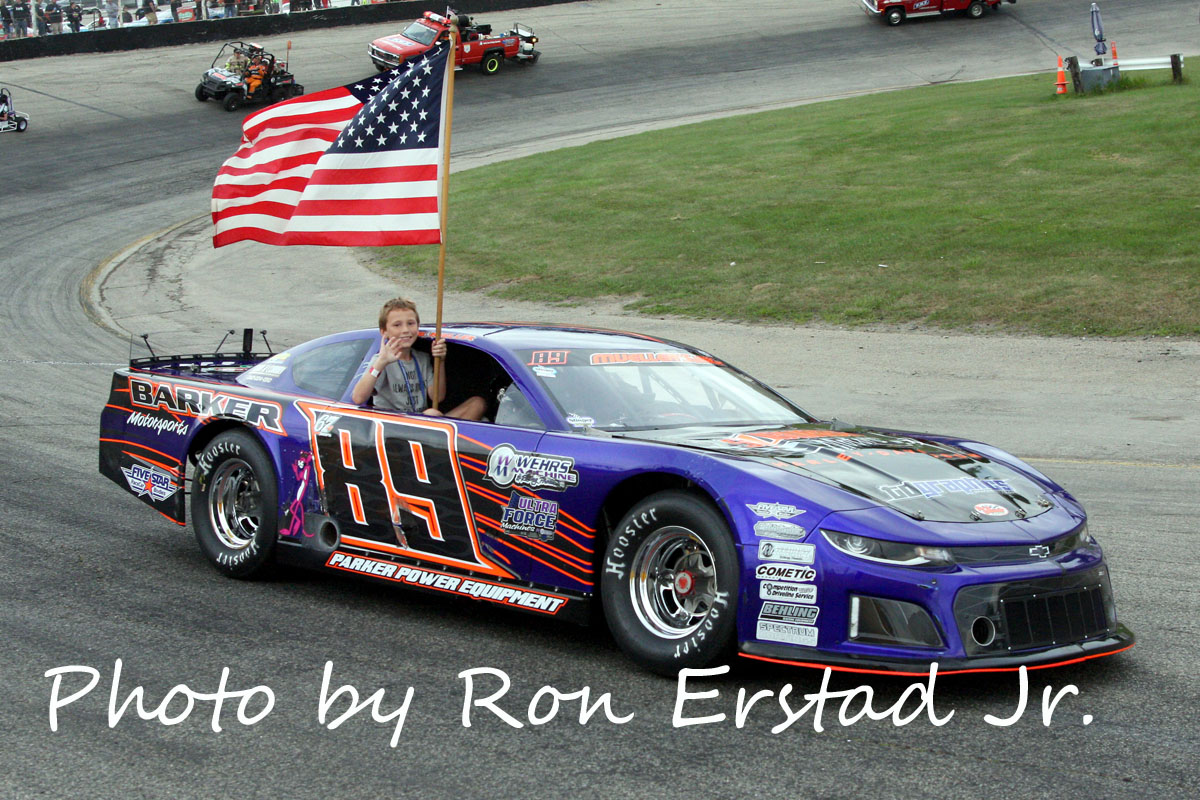 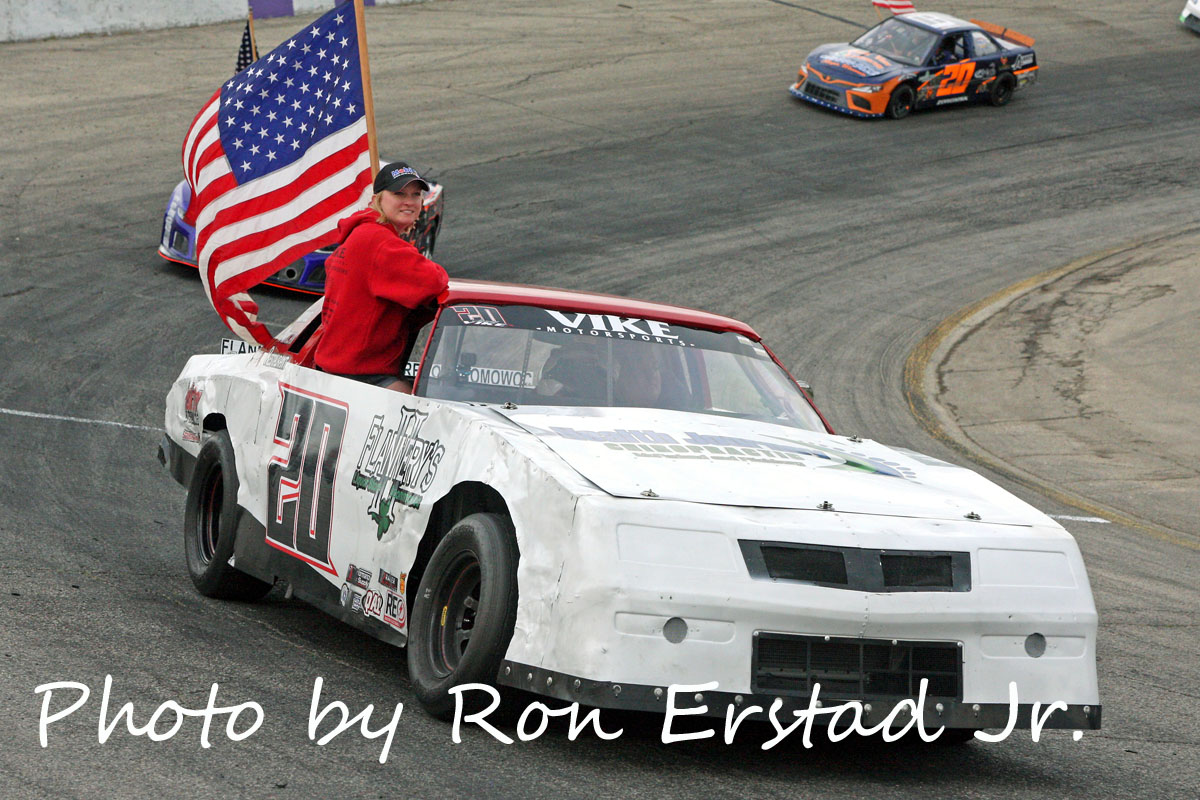 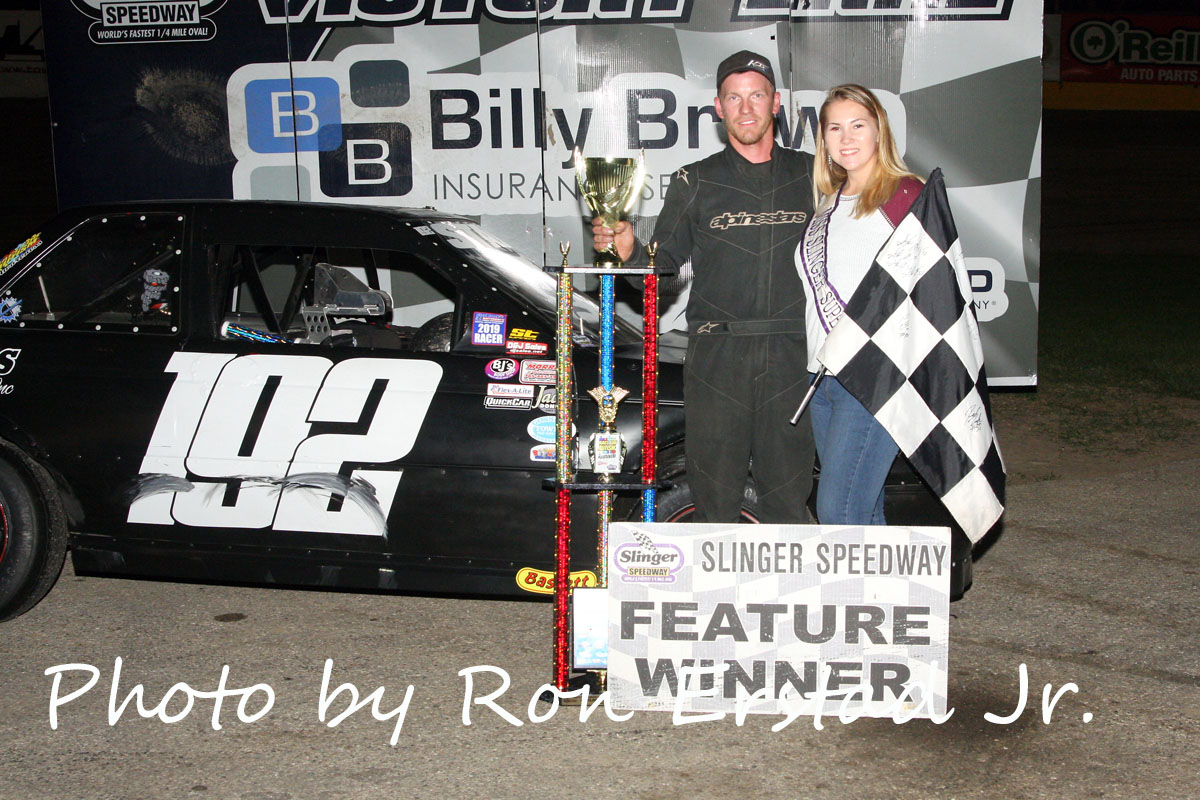