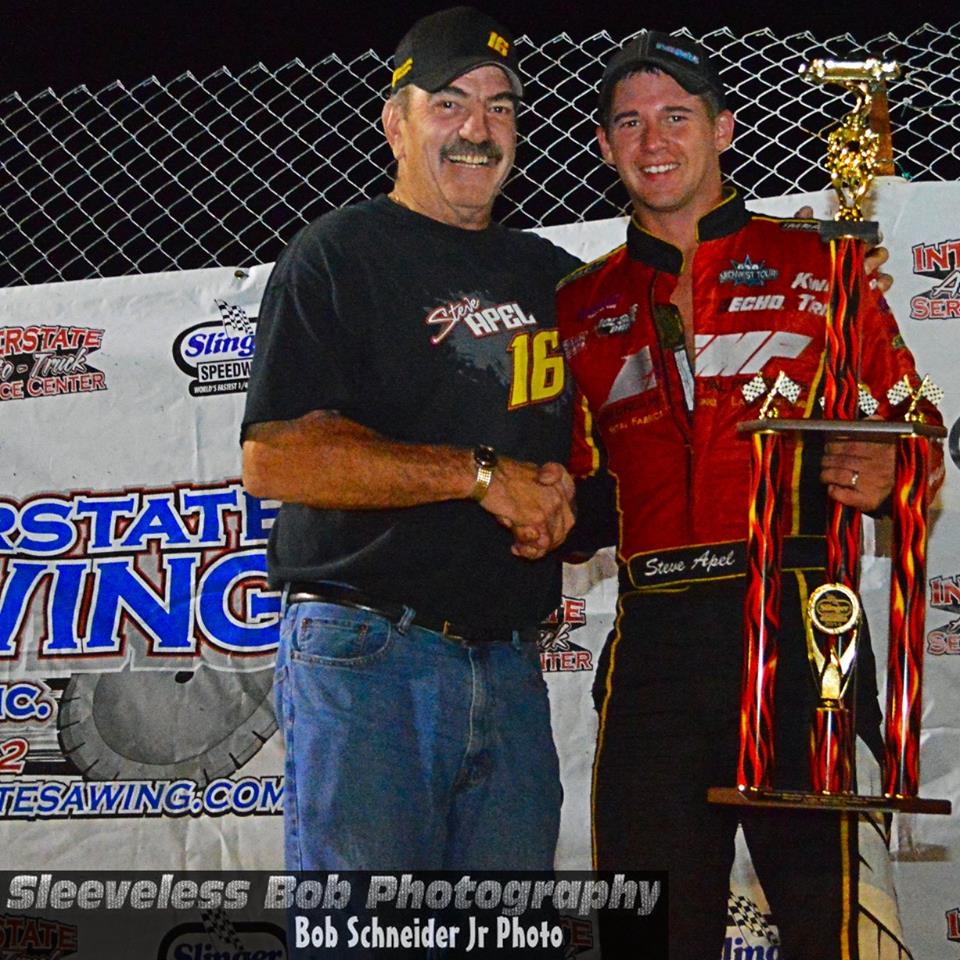 Tomorrow night the 2019 Super Late Model Champion will be crowned. Apel holds a 48 point lead over Brad Mueller, and a 52 point lead over Alex Prunty. Mathematically, it is possible for any of them to win the championship! Go to the track website, select Fan Info on the right, and then select “10 Questions” to find the previously-done Mueller and Prunty “10”.

How did you get into racing?
When I was two years old, I started coming to the race track with my dad. I started going in the pits when I was 12 and my dad was helping Dan DelCamp and Team 16. When I was 14, my brother [Jared] and I talked Mom into letting us get a 4-cylinder. We switched driving duties every other week for about a year and a half. Then I talked to some sponsors, got a 4-cylinder on my own and raced full time. When I was 16, I got into Limited Late Models with DelCamp’s and drove that for two years, finishing second to Jon Reynolds, Jr. one year. Nick Schumacher was driving for DelCamp in the Super Late Model at that time, and they parted ways at the end of the year. I ran the Super Late Model for DelCamp for four or five years and won the championship in 2013. At the end of that year, we split ways and I went with my own family team.

What is your real job?
I sell robots – industrial automation – for Acieta. I’ve been there a little over two years.

What do you like about Slinger Super Speedway?
Its 2.5 miles from my house. Well, that’s not number one though. When I was growing up, we were there every Sunday; it was a family tradition. All my sponsors are from the area, and it doesn’t do them any good if I go anywhere else, so we’ve just focused on racing at Slinger, trying to get some publicity and marketing for the people that support our racing program. Lots of our sponsors come out to the track on any given Sunday so we get to show them what they spend their money on and hopefully get them some business. At the end of the day, it’s a win-win for everyone. And, of course, the race track – it’s the world’s fastest ¼ mile oval! It’s pretty cool that we can race there weekly.

Anything you want to say to Alex Prunty and Brad Mueller as you head into Championship Weekend for the Super Late Models?
(laughs) Ohhh boy…In the last six years we won three championships, lost two by like a total of 20 points, and last year we didn’t run full time. To be able to get back to racing full-time and race those guys for the championships…they both have good teams behind them and are prepared just as well as anyone else…it shows that we can be a player with the top contenders. We’ve had our fair share of battles with Alex. With Brad, there’s kind of a mutual agreement that we want to load it on the trailer the way it got there. I hope it doesn’t come down to a part failure or crashing out, and the best team wins.

Who do you need to thank?
Crew: My brother, Jared – he’s a guy that can do anything on the race car; he’s kind of the crew chief and gets everything organized on the car. My dad, Mark – he’s my spotter, my eyes in the skies. He’s been my spotter since I started racing. There have been a handful of nights when his eyes have saved me from getting into wrecks. That’s important because when you are running for a championship, you can’t get caught up in wrecks. Marcus Gee – another guy that can do it all. He came onboard a couple of years ago, and has lots of experience in racing in general. He’s become one of my really close friends too. Dave Gauthier – another guy that gets it. He can hustle and get the job done. He can do anything on a racecar. Doug Droese – he’s the tire guy and has been with me since I started racing. Having a good tire guy in your race program is important…success is based on the tire program. Doug is a big supporter of everything we do and is a good family friend.
Sponsors: We couldn’t do it without sponsors, they are really what makes our program tick. They support our habit of driving around in circles as fast as we can. I’ve had a lot with me for a long time. Dave Schroeder and Carl Wegner passed away in the last year – both were (and still are) supporters of our program. Dave was my first sponsor when I got my 4-cylinder. As I moved up the ranks, his support grew with me. This year’s sponsors are Schroeder’s Simplicity (Sussex), Acieta (Waukesha), Engineered Metal Products (Jackson), RAM Tool (Grafton), Zeller Transportation (Hartford), HMB Landscape (Menomonee Falls), Weix Industries (Richfield), Brake & Equipment (Butler), Keener Insurance Solutions (Germantown), All Pro Asphalt Paving (Richfield), Bruce’s Classic Restorations (Hartford), West Bend Sausage Plus, Speed Seat (Delafield), Wegner Automotive (Markesan), Wimmer Motorsports (Wausau), Earnest Performance (Mooresville, NC), Waldo Hemp Works, Bassett Racing Wheels, Five Star Bodies (Twin Lakes), Brendan Dobson Memorial Fund (Slinger), and Fury Racecars
Anyone else: Obviously my wife, Liz – she puts up with a lot of nights in the race shop, plus balancing two young kids, work, and life. She makes dinner for the race team when they are over – 5 or 6 people every night on top of taking care of the kids running in and out of the shop, getting dirty, trying to drink soda when they should be drinking water…like now (laughs). And the other wives and girlfriends of the crew guys. Racing can be a sport that takes up a lot of your free time. Especially weekends that could be spent doing other things, but the girls are there supporting us in the stands.

What is your favorite memory at Slinger?
Setting fast time at the Nationals, leading some laps at Nationals, but the best has to be the first track championship [in 2013]. We had been close a couple of years prior, but couldn’t get the job done. The first one is always special.

How did you get your car number (#51)?
After the DelCamp’s and I split up, we sat in the race shop and tried to figure out what number we wanted to be. Everyone wrote down a number, we threw them in a hat, and narrowed it down to three numbers. Then we looked at who currently raced at Slinger. Number eight was one of the three, but Josh Wallace was racing at Slinger so we didn’t want to use that number. Number 30 was another one, it was Eric Fransen’s number when he started racing super lates. But we ended up agreeing on #51. We all liked it and nobody had used it at Slinger since Dave Teske.

You have two sons [Cameron, 4 and Harrison, 2]; do you see racing in their futures?
I would say yes. Obviously being around it growing up, you kind of develop the drive to race. I want to give them the opportunity if they want to do it, but I don’t want to push it on them if they don’t. But with the addiction of being in racing, in the pits, hanging out with the guys… I’m guessing one or both of them will be holding a steering wheel.

Which Slinger driver (past or present) do you respect the most?
This is a two-part answer…
The guy when I was growing up that won everything was Conrad Morgan. He got the job done back then and is still winning races now. To have the drive and passion to keep doing it even after health issues and multiple bad crashes…this way of life can take a toll.
Then Lowell Bennett – when I first started racing Super Late Models, I had my fair share of…I’d say…inexperience issues on the track with multiple drivers. But Lowell was one that I’d go to talk to right away. He knew where I was coming from. He always said it wasn’t about winning, it was about enjoying it, and having respect for fellow racers. Being able to load the car on the trailer in one piece is the goal of everyone. There are 20 guys that go on the race track, but only one can win. He told me you won’t be in a position to win every week so you take what the car can give you, then come back the next week and battle back. 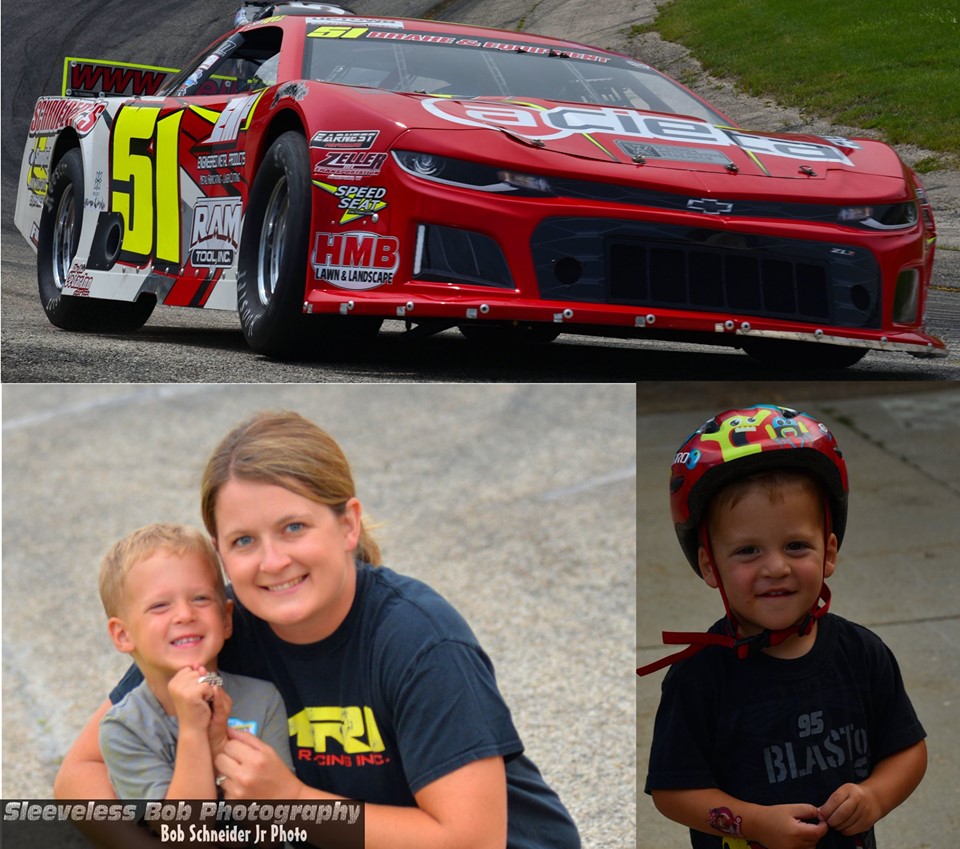